For reasons far too dull to go into here, I was in Liverpool city centre in the early evening with time to kill. Can we talk about this hospitality gap we have in the UK, where there’s nowhere to go between the shops closing at five thirty and your dinner reservation at seven thirty? The default used to be to go to a pub, but I was in the University district, and students these days don’t drink because they’re all healthy and care about their bodies so there are hardly any pubs. It’s disgusting really. We have an entire generation of nineteen and twenty year olds who’ve never woken up in a stranger’s bed, their head pounding because of too much cheap lager, and had to sneak out before the other person wakes up. (Not that that ever happened to me of course).

Anyway. I found myself wandering the University precinct, an area of the city centre that’s unfamiliar to me. If you’re not a student there’s no real reason to come up here, and so the various alleyways and pedestrianised walkways are a mystery. I’d been to the Student Union before, of course; I came here with the Edge Hill LGB Society (no T back in those days, though we added it the following year because we were not awful people). It was very early in my first year and was intended as a welcome to the area for new gay students, to let them mingle with other homos from the area, so I piled into a minibus with a load of people I didn’t know and we all headed into Liverpool pretending we were after comradely conversation and discussions of queer politics when we were actually all after a snog. None of us got one; the Edge Hill people stayed in one corner and the Liverpool people stayed in another and I ended up giggling with a gay guy and a lesbian.

Where was I? Oh yes, on the nostalgia train.  I wandered into Blackwells, a once great bookshop that’s now a shadow of its former self. They had a 3 for 2 that looked interesting but it was close to closing time and the staff had an air of “I sincerely hope you’re not thinking of browsing because I need to get home” about them. I walked away from there, down a path full of revoltingly young and happy well educated people, and I ended up on the bit of land behind the Union. It’s been landscaped beyond all recognition but there are some things you can’t hide. Like this. 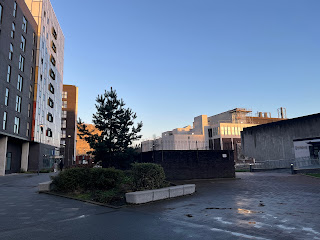 Guarded by spikes to stop any, ahem, “adventurous” spirits venturing over the wall, that’s one of the vents above the main tracks into Lime Street. There’s a ridge of rock around Liverpool which meant when Victorian engineers tried to get trains close to the city centre they had to tunnel. Or rather, in those days, dig down into the ground to create a cutting they could roof over. Because of the steam trains they obviously had to make room for ventilation and so these voids exist along the length of the tunnel.  There’s another one right next to this one. 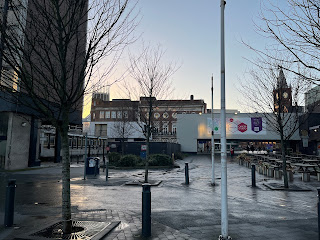 This open expanse of hedges and paving isn’t so much a lovely space to relax and more of a practical solution. Those Victorian tunnel builders were still learning their craft, and so they dug a relatively shallow hole. It’s created a tender zone where you can't build.  In fact it's worse than that.  A sign on one of the voids warns that you need a permit to operate heavy vehicles in the area, purely to stop trucks from plummeting onto a Pendolino. 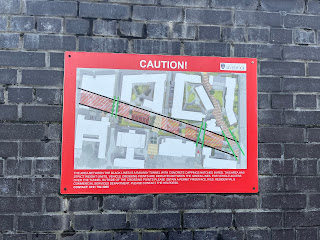 In an ideal world there'd be a station here so that all the students could get easy access to the railway.  The sheer volume of trains using these tracks make that difficult, though a suggestion pops up now and then to much head shaking from Network Rail. 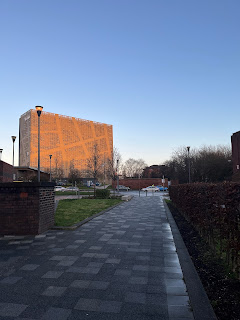 It did make me think though.  Nearly five years ago I followed the routes of the Waterloo and Victoria tunnels, two disused freight tunnels that pass under the city.  They solved the ventilation problem by creating towers to suck the smoke up and out and distribute it over the heads of poor people.  The shafts are still there, though in 2017 two of them were inaccessible, hidden behind the fences round the former Archbishop Blanch school and basically a building site.
Now that's developing into a new district, Paddington Village; there's a college, a multi-storey car park, an office block and a Novotel opening soon, with work underway on more to come.  It occurred to me that the ventilation towers might be more accessible now.  I walked up to Grove Street and there it was. 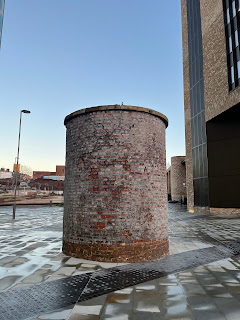 A round circle of brick in the middle of a plaza, right outside the entrance to the Royal College of Physicians and surrounded by fancy seating and planting.  There was no sign to tell you what it was.  It was simply a mysterious cylinder, plonked outside all the gleaming new buildings, a historic artefact breaking through. 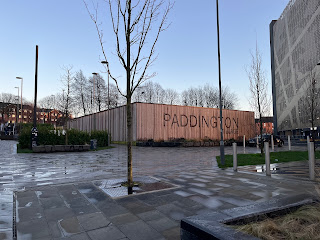 Its sibling hadn't fared as well.  As with the University Precinct, the tall buildings of Paddington Village have to avoid the tunnels underneath the site.  The foundations for multiple storied hotels would slice straight through them and, even though they've been out of use for decades, nobody really wants to give up completely and fill them in.  The result is another wide open plaza, but with steps and ramps built in to process the changes in levels over the site.  The second ventilation shaft has seemingly ended up buried inside the landscaping and now barely pokes above ground, surrounded by planting. 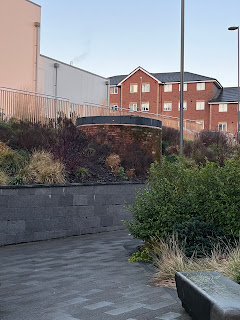 I turned round and looked out as the sun came down.  One advantage of Liverpool facing west is it gets awesome sunsets and suddenly, briefly, I was looking down over a golden city, its buildings glowing, its towers and crowns on fire.  I trotted down the steps and returned to ground level.  There had to be a pub round here somewhere. 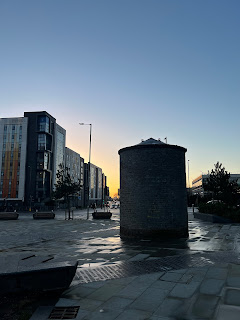 New ALF at Prescot :Home of the Shakespeare North Playhouse.Lifts as well.