When I moved to the northwest in 1995, I would get the train from Ormskirk into Liverpool.  The Merseyrail map had, down near the bottom of the Wirral Line: Eastham Rake - Under Construction.

A couple of years later, the map was updated again, and there were two new Merseyrail stations stations marked as Under Construction: Conway Park and Brunswick, plus Wavertree Technology Park on the City Lines.

It meant that I got the impression that Liverpool's railway network was a constantly developing hotbed of excitement.  It turned out this wasn't true.  However, we do seem to be in the middle of another purple patch of new station thrills.  Maghull North opened a couple of years ago, Headbolt Lane is under construction, and the Skem and Borderlands extensions are glacially progressing.  And then we got some news about the new city station, on the site of the long closed St James.  A consultation about the name, plus a whizzy fly through video.

My first impression?  Wow.  A station fan in the United Kingdom has a certain in-built sense of disappointment.  We're used to being promised a fancy new line with beautiful architecture then getting a single stub with a bus shelter on a platform.  We're used to getting promised a massive high speed railway that will transform the nation then getting one branch lopped off and a new station in Manchester that is badly designed. 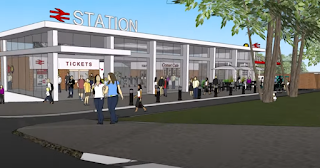 Now all this is caveated with the design is not yet finalised and this video is indicative but that's a proper station.  I had been afraid that we would get a repeat of the rather disappointing glasshouses that have shown up at Maghull North and Headbolt Lane.  They're little triangular sheds that house the ticket hall and nothing more.  Here, Merseytravel and the Liverpool City Region authority have made a large, spacious building.

This is, after all, a city centre station.  More than that, it's probably the first station to be proposed that will encourage travel within the centre.  At the moment, few people would get a Merseyrail train from, say, Moorfields to Central; by the time you work your way from the surface to the platform, ride the train, then come back up, you may as well have walked.

The new station, however, is in a spot that is just that bit too far to walk.  There's a reason why the Baltic has been slow to develop along with the rest of the city - it's too isolated away from the rest of the city centre.  It's almost a mile from Central on foot, and that's a walking route along busy roads and dodgy backstreets.  Putting a new station in this spot would open up travel for just one or two stops in a way that doesn't currently exist. 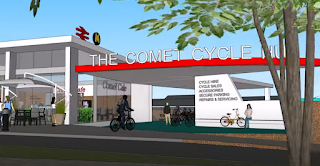 The inclusion of a cycle hub adds real value to the site, making it a public transport interchange on a few levels.  Presumably they'll also stick in a spot to hire those whizzy e-scooters that are constantly being driven on the pavement all over Liverpool.  With any luck they'll also tame the roads around the station - Parliament Street is six lanes here; not exactly a pedestrian and cycle friendly environment. 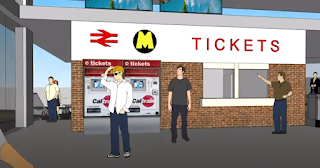 Head inside and you can buy tickets for CalTrain, San Francisco's commuter rail network, which is very handy I'm sure you'll agree.  Of course I'm joking; the CGI used is rudimentary but does the job, and you just have to ignore the blank unstaring faces of the commuters.  There's also a cafe in the ticket hall, with some tables set outside, which I'm sure will definitely happen. 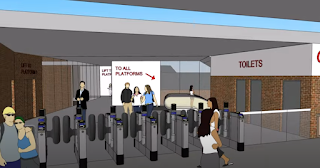 It was when the flythrough went through the ticket barriers that I realised Merseyrail were taking this station seriously.  The station has escalators.  Escalators are expensive to install and maintain and so often get value engineered away - Conway Park lost its escalators before it was built and ended up with lifts only.  A station in a city centre should absolutely have escalators.  You want to whizz people to and from the platform as quickly as possible. 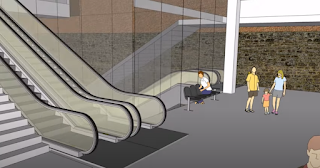 At platform level, there's a pleasing mix of old and new, the 150 year old cutting walls complemented by new steel and glass inserts.  It's a bit like Liverpool South Parkway, the last really big project Merseytravel dealt with, right down to the over-track waiting area.

The final piece of the puzzle is what to call it.  There are three options:
Leaving aside the pointless "Liverpool" prefix (which will probably only be used in official documents, like how the underground station is Lime Street on the trackside signs and maps but Liverpool Lime Street everywhere else), it's clear that these names aren't equal.  We can rule out "Riverside" right now, because it's a daft suggestion, and the station's nowhere near the river.  Both James Street and Brunswick are much closer to the Mersey and you don't want tourists getting off at Riverside station looking for the Albert Dock.  "Parliament Street" is geographically accurate, but incredibly dull - naming a station after the road it's on is the laziest possible solution.  Also, Parliament Street becomes Upper Parliament Street at this junction, and Upper Parliament Street is a mile long; if you didn't know too much about Liverpool and wanted to get to the Women's Hospital you might get off at Parliament Street station and then face a very long walk.
So it's Baltic, really, the name that the station has been informally referred to for years, the name that describes the area it's in, the name that has fashionable cachet.  Even if the public voted for Riverside I suspect there'd be a Blue Peter-style fudging of the results to get the name the authority wants.
To summarise: this is a great proposal that could transform the city centre completely.  Please build it right now.  Thanks.
You can vote for the new station name here.  Please vote Baltic.
Posted by Scott Willison at 12:33