Those standards will not be met in this blog post.  I apologise in advance.

I'd gone out to Kirkby because I'd heard that work had started on the newest addition to the Merseyrail network, Headbolt Lane.  At the moment it's mainly enabling works - there's no actual steel or anything coming out of the ground - but still, a significant moment.  The first new station since Maghull North in 2018 and the first extension to the Merseyrail network since the Ellesmere Port line was electrified in 1994.

I had to go out there in a car because of, variously, Omicron, Kirkby's reputation, and laziness, so I enlisted the BF to drive.  I do have a driving licence, and even used to have my own car, but when I had my breakdown it knocked all the confidence out of me and filled me with anxiety.  I once moved the car from the drive to the road outside and ended up sweaty and panicky with my Fitbit basically registering my heartbeat as "coronary" so that was the end of that.

He drove us out to Kirkby, a town which will never be mistaken for Venice.  It was built as overflow for Liverpool with an accompanying mass of industry for employment and like many towns of its ilk it's suffered from unemployment, crime and poverty ever since.  In recent years, Knowsley Council has made an effort to regenerate the place; some of the more regrettable housing estates have been knocked down, the town centre has been rebuilt, but this is still the place where every Hallowe'en the bus drivers go on strike because of the very real problem of kids chucking cement blocks at their windscreens.

Hence the need for Headbolt Lane.  A lot of new housing has been built in an attempt to woo new residents to the town, and a fast efficient link into Liverpool would be a major catalyst for development.  It helps that Kirkby station itself has always been a bit rubbish - two single tracks meeting at buffers as the electrified Northern Line gives way to the diesel Wigan line - and that the branch has always had a lot of slack, timetable wise, meaning it's easy to slot another stop in. 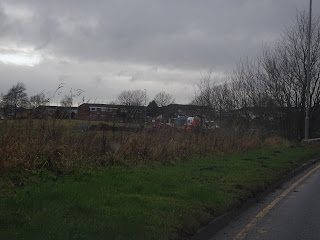 We cruised the streets of the town until we encountered Headbolt Lane itself and there it was: the worksite.  Like many new towns, the planners had decided that what people really want is lots of long looping roads with no pavements, meaning there was nowhere to stop and get out and walk.  As a result, all the pictures are taken from a moving car, and a car that could do with a wash as well, so the dark foreboding skies may also be crud on the windscreen. 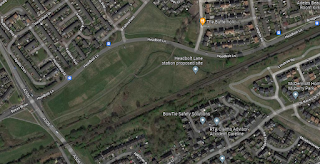 The station will, eventually, occupy the curve between the road and the railway (as someone has nicely marked up on Google Maps) with a park and ride, cycle stands, and a station building.  For now, they're simply levelling the ground and getting movers and diggers on site. 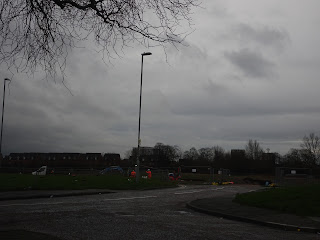 At this point the workmen spotted me snapping photos from the dashboard like a very bad private detective and started giving me funny looks, probably thinking I was from Network Rail checking they weren't slacking, so I took one more photo then we headed off. 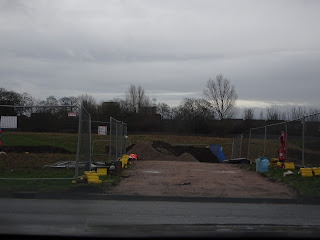 Further down the line was a pedestrian footbridge over the railway and I thought this might be a good place to get some more shots.  Kirkby's reputation for, let's say "mischief", put paid to that.  The entire bridge was encased in a metal cage with only the narrowest of gaps between the bars; I managed to stick my telephoto lens through a bit but there are still shadows at the top and bottom. 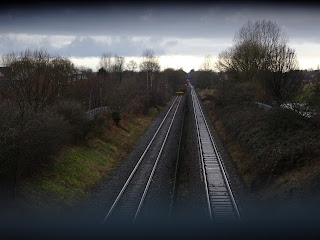 Someday there will be two platforms for Merseyrail, a third for Northern trains, and a proper commuter station around those tracks.  A few years after that - with any luck - it'll be a through line to take you all the way to Skelmersdale.  Next year we'll be able to come here on one of those brand new trains they keep teasing us with.  Then we can get on the next train back because you don't really want to hang around.
Posted by Scott Willison at 10:52