I was in West Kirby, paying a socially distant visit to a person in my bubble, because those are all phrases that make sense in 2021.  The BF had dropped me off earlier that day but now it was time to go home and, rather than calling him for a return trip, I did something wild.  I took the train. 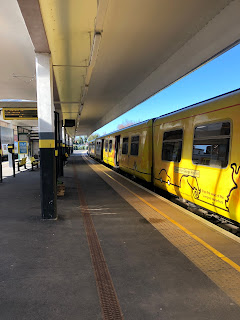 It's over a year since I last took a train.  The pandemic ruled out any non-essential journeys, and "going to Birmingham to take pictures of stations" is the very definition of non-essential.  On top of that, the BF has a number of underlying conditions, so he's been shielding since about last February.  I've been shielding with him too, because I'm nice like that and I don't particularly want him to die, but it does mean I've barely left the house.  So here I was, on a train platform.

I was anxious, of course.  I was wearing a mask.  I didn't really know what to expect.  I boarded the train and found a seat.  My first surprise was that there weren't any taped off; I'd seen pictures on social media of other train companies' efforts to encourage a 2 metre gap.  Merseyrail doesn't bother with any of that.  I wedged myself in a corner. 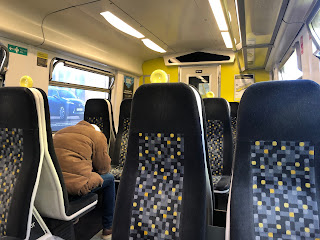 The only other person on the train was a man reading a book.  Later in the journey he'd take advantage of the light passenger numbers to rest his feet on the seat in front; it's good to know the pandemic bringing the nation together hasn't stopped people from being massive arseholes.
Just before we departed a third person boarded, a young, tall man.  He was not wearing a mask.  Now it's possible he was under 16, even though he was about six foot seven.  It's also possible he was another of those massive arseholes.  He disembarked at Hoylake with a smirk, as though he'd beaten the system.
We took off.  The guard ran through her usual announcements, but now there was a new one about wearing masks "unless you are exempt."  I always love the grudging way announcements add that, a kind of yeah, we totally believe you're exempt, honest undercurrent.  In my limited experience out and about I've observed that an awful lot of people who are "exempt" are middle aged men with miserable faces, the kind of men who'd ask you what you was staring at in a pub.  Funny that. 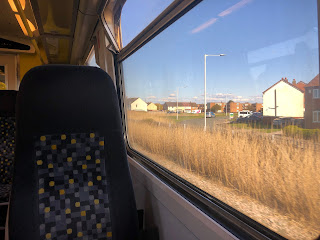 The familiar stations rolled by - Hoylake, Manor Road, Meols, Moreton.  There was a cyclist at Manor Road, but that was it.  It was so soothing to be back on the trains.  To sit quietly and watch the view.  To think about nothing except the gentle grind of the wheels, the whirr of the engine, that clicking noise that I'm really going to miss when the 777s come in.
At Leasowe a girl in a natty green gingham jacket boarded.  She reached into her handbag and checked her make up with a small compact.  There was something surreal about her inspection, giving such attention to the two inch wide strip visible between her fringe and her mask.  She gently fluffed at her eyelashes, the only part of her visible, then pulled out a hairbrush and ran it through her blonde hair.
My anxiety had largely subsided.  The train was quiet and almost empty.  Everyone was civilised.  I didn't feel like someone was about to barrel on, hacking up virus all over the place, like the man at the start of The Thing.  It felt normal.
At Birkenhead North depot, there were a couple of Transport for Wales trains, those converted Tube trains destined for use on the Borderlands Line and which I'd never before seen in the flesh.  There was a pause at the station, enough time for me to watch British Transport Police officers on the bridge enforcing ticket and mask checks. 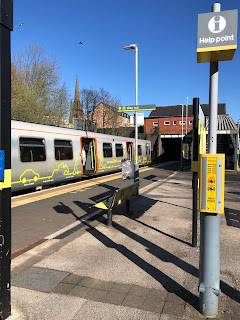 Birkenhead Park.  Home.  I got off the train, thrilled with the familiarity, the ordinariness of it.  I had worried that going so long without travelling would mean I would find the return stressful.  It wasn't.  It was normal.  I'm not sure when I'll get up the courage for a longer journey - maybe after my second dose - but it's been done.  That period of time without taking a train trip has finally ended. 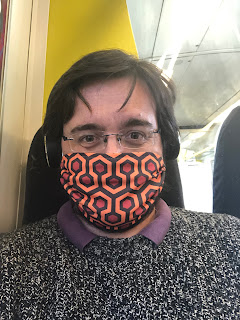 Will you be back in the Midlands. Or is that a bit too far for the moment?

Great to hear you're back on the trains. Hopefully that's a sign that maybe, just maybe, the world is very slowly returning to normal.

As the BF has some underlying conditions, it makes sense to be prudent about going into potentially crowded spaces for a little bit longer. Hopefully you get your vaccines soon plus a few weeks for them to take effect, and then the midlands-tarting must return.

I never understood the taping off of every other seat. In the periods when leisure travel was allowed, people travelling with other household members were perfectly entitled to sit next to each other. In the periods when it wasn't allowed, passenger numbers were low enough that people wouldn't sit near each other in the first place (which is the natural order of things anyway).

And if it does get too crowded then what are you supposed to do? In January I was on a crowded bus and some odious young mother (the type who you would expect to own a Land Rover to drive their children 500 metres to school - was probably in the garage hence she had to take the bus in the rain) slated an 80 year old Asian lady for sitting down next to someone she didn't know instead of standing up with her face in someone else's face.

Funny, an awful lot of middle aged men are exempt in Australia as well...