When I was trying to decide where to travel over the UK's rail network for a book that never ended up happening, there were a lot of possibilities.  One route that was definite though was the Borders Railway in Scotland.  I went up there in June 2016, and here's the start of that trip. 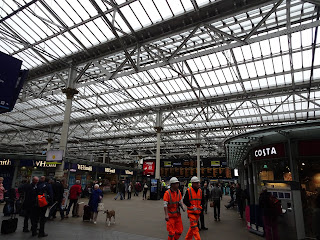 Edinburgh Waverley is, of course, one of the Great Stations.  It's big and it's busy and it's right in the centre of a bustling historic city.  But - and I'll whisper this quietly - I don't really like it. 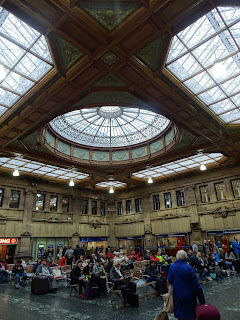 It's undeniably beautiful in places, with a wide clear roof and some lovely features.  It's never quiet.  It's exciting.  I just can't take to it.  I think it's the position.  Waverley is located in a drained loch in the centre of Edinburgh and as such is below street level.  Stand on Princes Street, one of the most famous and elegant roads in the country and which the station runs alongside, and you can't see it at all.  You reach it via a series of escalators, descending into the depths.  I feel like stations - major stations - should make their presence felt.  They should dominate and entice.  Waverley doesn't want you to know it's there. 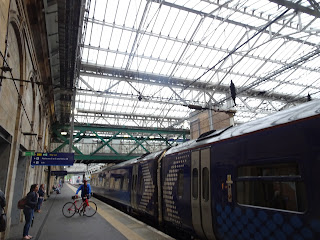 I headed to my platform on the far side of the station.  I was going out on the Borders Railway, formerly known as the Waverley Route.  For over a hundred years trains could reach Edinburgh from Carlisle over the line, until That Man Beeching came along and closed it in 1969.  As always with Beeching's cuts, basically the minute he closed it a campaign began to reopen it, and forty-odd years later construction began on a restored line. 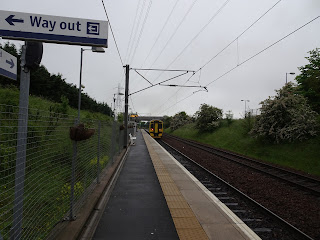 It wasn't all new.  My first station, Brunstane, had opened in 2002 on an old freight line.  It was very much done on the cheap - a single platform, no ticket office, few facilities - but it brought the railway back to an area of the city that had done without for way too long. 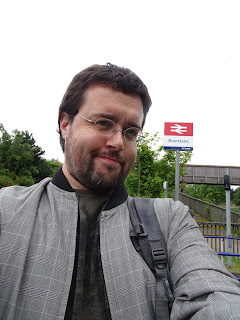 I left the station and crossed over the tracks on a footbridge still graffitied with a pro-independence Yes.  It took me to the car park of The Range, still quiet at this time of the morning, and then into a dark underpass that smelt of urine.  Halfway through it I remembered that Trainspotting was set in Edinburgh.  I emerged in a low dent, a pedestrian hollow that had been designed to walkers away from cars but actually had a disorienting effect.  There were no landmarks or helpful signs to get me anywhere. 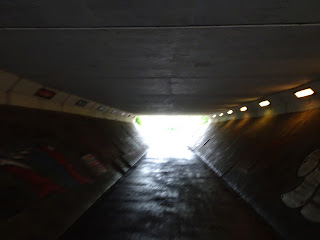 I finally turned out on a busy road, green embankments concealing any buildings, and found the footpath marked on my OS map.  It took me round the back of a housing estate, where a pink inflatable castle poked over the fence, and alongside an Asda that was roughly the size of Caracas.  You could've holed up in there for months and not needed to ever leave.  Handy for the apocalypse. 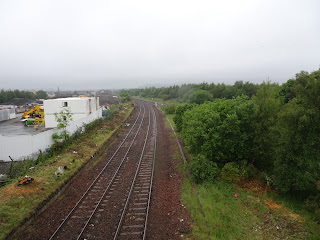 Another bridge took me over the quiet South Suburban railway lines.  It's a route that loops from the Waverley route round to Haymarket, meaning that freight trains can get from one side of Edinburgh to the other without having to pass through the busy central section.  There used to be passenger services too, but as with so many loop lines, most people wanted to get to the city centre, and once buses arrived to offer a direct road route the South Suburban couldn't compete.  There have been suggestions that it could be reopened, but not much passion for it. 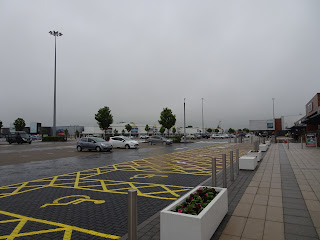 I was deposited at the back of Fort Kinnaird, a retail park with a name that sounds like you asked a rude Scottish child about their schoolwork ("How were your exams?" "Fort kinnaird!").  It had begun to drizzle by now, a low, wet, clinging rain that was too weak to fight off the heat of the summer's day.  Instead it soaked through my layers of clothing and made me grumpy.  I began the crossing of the truly enormous car park.  Honestly, it was like traversing the Sahara, only not quite so pretty.  I expected to see caravans of camels strutting across it.
Finally, off in the distance, I spotted a watering hole, or a Caffe Nero as it's more commonly known.  I went in and treated myself to a chai latte and a clean toilet while my coat dried.  I was also glad of the opportunity to spend one of those awful Scottish banknotes I had got out of the cash machine at Waverley.  I had a vague terror of still having some when I went back to England, so for my time in Scotland I paid for everything with a note.  Coffees, magazines, packets of gum - everything, no matter how small.  It meant that by the time I went home my pockets were dangling round my ankles because they were full of small change but it was worth it. 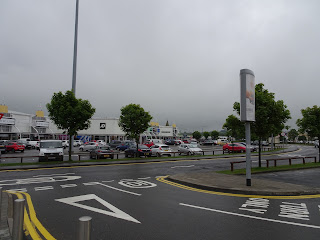 By the time I'd finished my drink the rain had stopped so I headed out.  Now I just had to find the exit.  This being a retail park, they hadn't really taken pedestrians into account - you only had to walk as far as your car - so I was constantly skipping across roads and dodging between parked vehicles.  Finally I found an exit, though I wasn't sure it was the exit I actually wanted.  At least it looked a little more civilised. 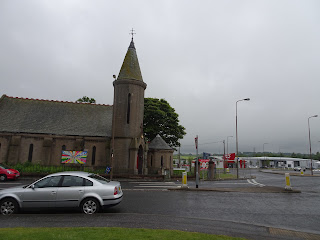 This seemed to be Edinburgh's retail district, a row of superstores lining a long straight road and stretching into the distance.  I passed under the A1 and saw my station further along, opposite a Premier Inn that I probably should've stayed at instead of the Travelodge in the city.  Yes, my hotel was just off Princes Street, but it was also accessed via the kind of dark alley that only shows up in crime scenes, and my view was of the back of a building. 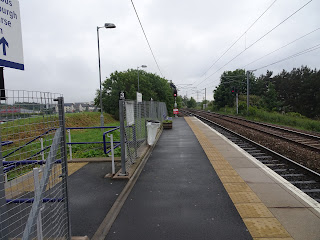 Newcraighall opened at the same time as Brunstane.  Its position close to the A1 made it ideal for a Park and Ride and as a result it's a bland nothing of a station; a car park with a platform attached.  It did have an embankment with flowers on it, and a sign informing me that the flowers were maintained by the Rotary Club of Portobello, plus a steel artwork on a mound. 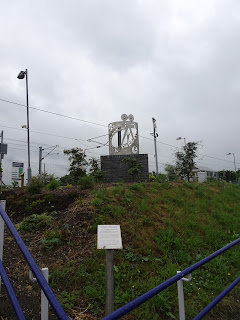 Apparently it commemorates "the 40th anniversary of local director Bill Douglas releasing his iconic film 'My Childhood'".  I don't know what that is, but well done.  Newcraighall was the terminus of the line for a decade, with trains going straight through Edinburgh and out the other side.  When the Borders Railway proper opened, however, that ended.  I took a seat and waited for my train, a little excited.  I was about to travel on the new section. 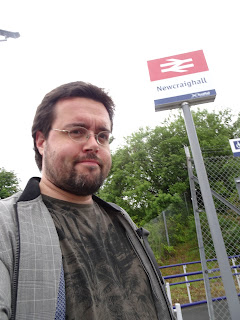 I've stayed in that Travelodge off Princes Street, couldn't find the entrance to start with, then the place is a rabbit warren of corridors. They deemed to put me at the farthest place from reception that meant walking half way round the city it seemed. But I did have a view of Waverley.