This entry was originally published over at the Coronation Street Blog, where I can often be found complaining about Michelle Connor's entitlement and worshiping the amazing Moira Pollock. 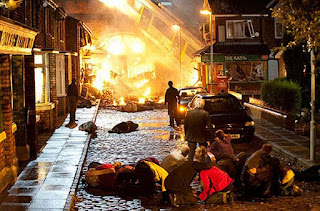 Coronation Street and Metrolink have a complicated relationship.  This is perhaps to be expected given that the show once used a tram to try and dent Rita's wig.  The two Manchester icons nudge up against one another, occasionally butting into each other's business, sometimes working together to celebrate.

The earliest Metrolink intervention came in 2005.  Mousy mum Claire Peacock revealed that she had long dreamed of driving a tram, and even applied for the job, but it didn't go any further.  The reason for this was GMPTE's objection when they discovered that the plan was for Claire to drive a tram right off the viaduct and into the Street.  They were understandably less than thrilled that the show was portraying their network in an unfavourable light, and the whole storyline was dropped.

It was another five years before the tram finally made its way off the viaduct, this time with Metrolink's assistance.  Look closely, however, and you'll see their subtle influence over the plot and the filming.  The tram crash is not the fault of the driver; instead, it's the explosion at the bistro that causes a hole in the track, and he does his best to try and bring it to a safe halt.  They also used a T-68 tram (numbered 1030 - a number never used in real life), a model at that point being phased out across the network in favour of the M5000s; the implication is that this sort of thing might happen to the old trams, but not the new ones.  Finally, though the yellow and grey livery looks an awful lot like Metrolink's, tiny writing on the side identifies it as part of the "Politanlink" network. 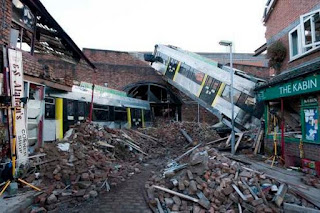 The negotiations between ITV and the local tram provider must have exhausted the producers.  A few months later, Izzy, Sean and Julie took the tram into town, except now it was a different network entirely.  Instead it was an orange "City Tram", calling at a very 1970s "Manchester East" stop that looked more like something from the abandoned Picc-Vic scheme.  It was a surprisingly permanent looking set, and made a couple more appearances before disappearing. 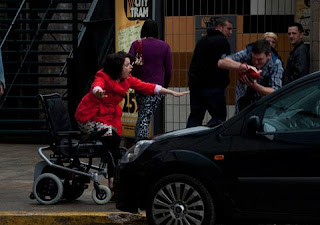 But it wasn't always Metrolink making the demands.  In 2014, they began consultations on a much-needed new tram line to the Trafford Centre, the second largest shopping mall in the UK.  The route passed along Trafford Wharf Road, right outside ITV's studio complex, and the broadcaster immediately objected on the grounds that the noise of the trams might interfere with filming.  Their objections were overruled, and the line is under construction right now, with a provisional opening date of 2020.

This slightly fractious relationship may be why the new Weatherfield North tram stop, unveiled yesterday, isn't quite right.  Nice try and everything, but it's just a bit off, and it makes you wonder if there was a breakdown in communication between the designers and TfGM.  Perhaps there was a licensing issue; perhaps there was a question over corporate logos and liveries.  But when it's sitting next to a lovingly recreated Costa and an incredibly accurate Co-op it's hard not to notice what's wrong. 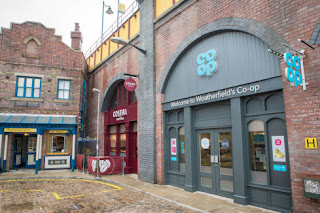 Let's start with that station building.  It's been designed to look like a former heavy rail station, which is fair enough.  Metrolink has taken over railway services right from the start; the Bury-Altrincham line which formed its first incarnation was a heavy rail line converted to trams.  In the majority of cases, though, the expensive-to-maintain station buildings were done away with.  Heaton Park, for example, retains the platform canopies and stairways from its railway days, but at the road level there's a large open patch of land where the ticket office used to be.  Some historic buildings were kept, but devoted to new uses.  Sale, for example, is now a newsagent, while the building at Trafford Bar is up for redevelopment.  The actual tram business lurks behind, entirely separate. 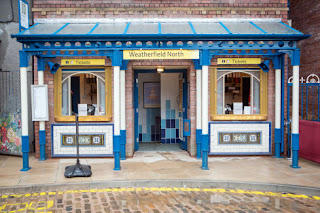 Weatherfield North is a station.  They've built a railway station and called it a tram stop.  The font used for the sign is Metrolink-esque, yes, but the signs for the Ticket windows use something more like Railway Alphabet.  Oh yes - there's ticket windows.  Which is completely inaccurate.  There are no manned Metrolink stops.  Tickets are dispensed by machines; the only time you can buy one from a human is where the tram line is shared with National Rail premises (and sometimes not even then - hello Navigation Road).  Note that the ticket offices come equipped with contactless card machines, so these have been planned for practical use within the show.

And on top of that - why would you build a station where the two members of staff are separated by a pedestrian entrance?  I love symmetry as much as the next OCD nerd, but that's an incredibly impractical building.  If Frank in ticket office one wants to talk to Sheila in ticket office two he has to lean out the window and shout at her.  If this were accurate, one of those offices would be a butty bar, and the other would be a cab office to rival StreetCars.  There would be a ticket machine just inside the doorway and that would be the beginning and end of the facilities - or, even more likely, a lift and a set of steps and no station building at all.

The colours aren't right either.  Blue?  For a Metrolink stop?  They are always, always yellow and grey; they're almost as obsessive about it as Merseyrail.  Any ironwork or canopy gets a slap of the corporate colours, making it immediately obvious that there's a tram stop there.  The blue and white is just plain wrong.  It's not even the teal of the old Metrolink livery.  It looks like they've tried to do a tram stop without Metrolink's input - note there's a lack of a Metrolink flag, too.  This is disappointing.  EastEnders has had a Walford East station on its set for decades, and it looks fantastic.  Weatherfield North... doesn't. 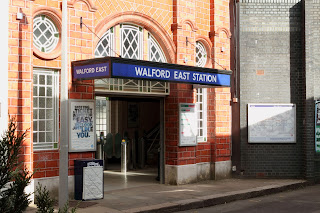 This might be overthinking; it might be personal bias.  I've been spending months visiting every Metrolink tram stop, plus years before that visiting every railway station in the north, so I'm pretty familiar with the architectural features and design of Manchester's transport network.  I looked at the photo of Weatherfield North and I was disappointed.  It isn't right.  I accept, for millions of Corrie viewers, it doesn't matter; they won't even notice.  It's just that the Weatherfield of Coronation Street has always been proud to be part of Manchester, and the Metrolink is a Manchester legend.  They should treat it with respect.

Let's finish with something a bit more fun; a look at the geography of the tram stop.  Many thanks to regular blog contributor David Chew for this map of the new set.

It seems there are in fact two separate tram routes (in blue) running parallel to one another; the one at the top of Coronation Street itself, and this new route with the tram stop on it.  The alternative is that the trams do a huge loop round the back of Mawdsley Street, which seems unlikely.  Presumably there's a junction further along where the lines merge, which helps us to place Weatherfield North on the Metrolink map.  Weatherfield has long been analogous to Salford, so it would seem to be somewhere around Pomona and Cornbrook.  Perhaps Weatherfield North is on a branch heading off at Cornbrook towards the new developments at Salford, I mean, Weatherfield Quays, while the Coronation Street line is the route to Pomona?  In real life that'd put Coronation Street in the middle of a dock, but I'm clutching at straws here. 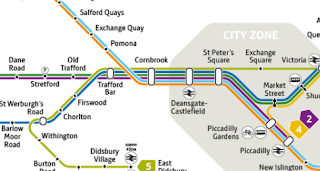 It's good that we finally know where Deirdre Barlow was getting the tram to work from after all these years.  It's just a shame that the stop isn't as well designed as the pool hall or the estate agents.  Maybe we can have another crash to knock it down and rebuild it.
Posted by Scott Willison at 13:57