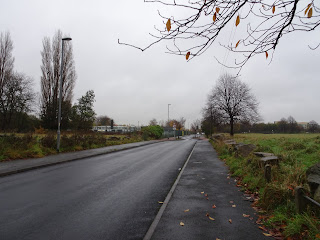 There are places like Monsall all over the North.  Cross the city centre ring roads, just a bit beyond where there's still building works and traffic, and you enter a dead zone.  You'll recognise it by the small houses that are just a little perfunctory, the blocks of flats surrounded by acres of empty grass, the too-quiet streets.  It's a bit of the city that used to be teeming with people and houses, too many in fact, so many that they got termed slums and were wiped away and replaced.  Except there isn't enough life to fill the old spaces.  It's like when you inflate a balloon then let the air out; it becomes wrinkled and sad.

There's space everywhere.  Too much of it.  The old houses and factories took up every inch but the new ones are separated by big patches of dead land.  Grassy polygons between the streets, not a park, not a waste ground, something inbetween; green, but brown.  They should be occupied by houses of course, but the land values aren't good enough for the private investors, and the estates have a bad reputation that makes the housing associations look away.  Instead they're vacancies, never filled.

It shouldn't be like this, and the cities know it.  These should be where the exciting vibrant people who animate the city centres should want to live: a house with a garden only a bus ride from the theatres and shops.  In London, this would be covered in cranes.  In Manchester, Liverpool, Leeds, Bradford - it's a dead zone. 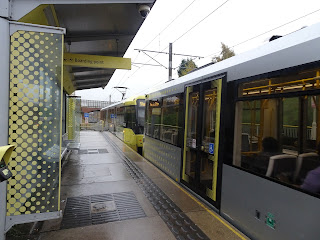 Maybe the trams will change that.  There's been a railway line through here for a century, but no station.  When it was converted to Metrolink in 2012, they placed a new stop here, the first one beyond Victoria, meaning a tram every six minutes into the city centre.  That should be a dose of life.  You'd hope so. 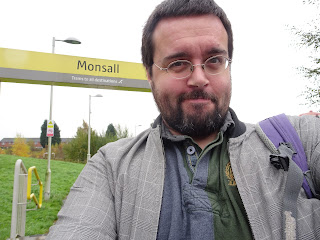 I turned out of the station and followed a lonely road, peppered with chicanes to stop boy racers.  At its end, a primary school, seemingly miles from the houses it served, surrounded by sharp metal fencing.  Across the scrubland, I could see the silhouette of the Beetham Tower, the gleaming symbol of 21st century Manchester, shaded with mist. 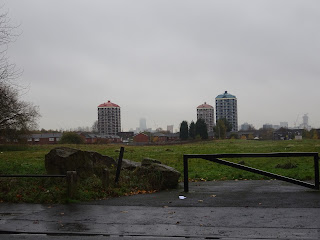 The factories have been replaced by Central Park, an office development.  Don't be fooled by the name.  Central Park may have immediately made you think of glamorous New York; chic Americans rollerblading by the reservoir, Carrie Bradshaw and Phoebe Buffay meeting on a park bench to chat about Woody Allen.  This was more Maidstone than Manhattan. 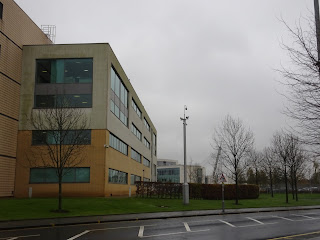 Blocks.  Blocks of offices, low-rise, surrounded by parking spaces, not at all interesting.  It was like one of the Airport business parks had somehow come adrift and floated down the Princess Parkway to the city.  I trudged along the pavement, past the police headquarters.  There, at least, was a smidgeon of charm; a Dixon of Dock Green blue lamp right outside the much more modern building. 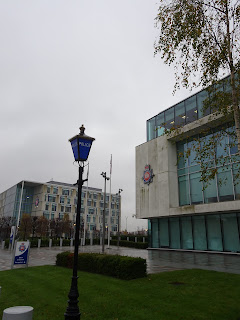 I'm being harsh.  I know.  I'm whinging.  I just wanted better than a bit of Milton Keynes in Manchester.  I bet they're great buildings to work in - clean and efficient and modern.  Having parking outside is really handy.  And I hope they've brought a bit of money and security to Monsall next door.  It's just it was a drizzly Monday, and I was feeling grumpy.

Central Park tram stop is at least a landmark.  I've been getting excited about the little yellow arches at the stops; Central Park has a roof. 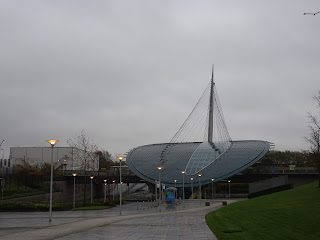 Okay, technically it's not a roof, more a sort of shield that floats over the tracks, but it's still pretty impressive.  It's a deliberate landmark, designed to catch the eye as you enter the business park through its main entrance, and it shields the tram stop from the worst of Manchester's weather.  Central Park was actually the first tram stop built on the line - it was finished in 2005 with the rest of the business park.  As it turned out it was a seven year wait for the trams themselves, making the gateway a slightly more embarrassing landmark than it was intended. 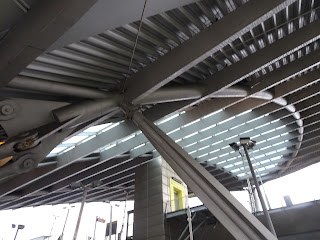 Underneath it's clear that the canopy serves no real purpose.  It's just a bit of metal and glass.  But at least it tries.  The Metrolink stops are, in the main, identikit; if you told me there was a factory churning them out, I'd believe you.  Central Park is a bit different. 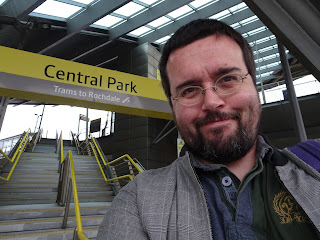 Newton Heath and Moston station was different too.  I'd been to Metrolink stops with island platforms, and terminating stops, but I'd never been to one that was single track. 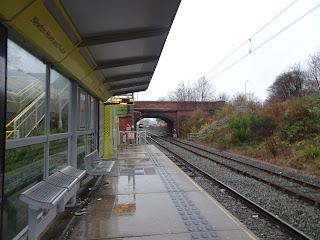 The stop is wedged between the Northern rail depot and a waste processing facility; so that trains could still have easy access to both, only one line of the former railway route was given over to the trams.  Hence my two minute delay on a stationary tram just outside the stop, waiting for the platform to become free.

Newton Heath and Moston is also Yellow Arch free.  It was a real disappointment.  There had been arches at the previous stop, but apparently the money ran out at that point.  Of course, I only discovered this after I'd walked up to the road to take the sign picture; it meant turning round and having to find a platform sign. 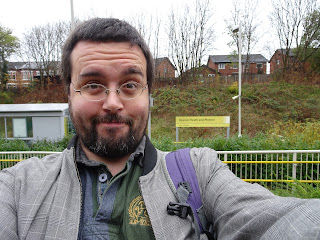 It is there, I promise.

Returning to street level, I turned onto the busy Oldham Road.  As its somewhat perfunctory name suggests, this isn't the most glamorous road in the world.  With the railway line to the north and a canal to the south what's developed is a seemingly never-ending strip of industry.  Once I was past the relative glamour of the pagoda-shaped restaurant suppliers, it became a chain of workshops and yards. 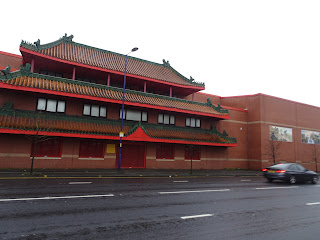 Who knew tyres were such a big business?  They were everywhere.  Sign after sign told me that they were Manchester's cheapest, best, most trusted.  There was one called Punctures, which seems a bit of a self-defeating name to me.  Spinning signs and arrows directing you up a side street for TYRES.  In amongst them, other businesses devoted to every other part of a car's life cycle - cleaning, repairing, then, up against the railway line, heaps of broken metal where the end came courtesy of crushing jaws.

I passed the plasticky warm smell of a McDonalds drive in, which made my stomach growl in hunger, and a closed social club with boarded up doors and windows.  Hanging from the side, just too high to reach, was a banner: Look Who's 50!, then a picture cribbed from Facebook and some poor sod's name.  It's bad enough turning the Big Five-Oh without a sign reminding passers by of it until the end of time. 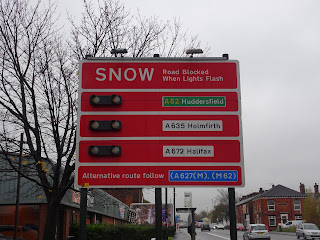 This, on the other hand, is wonderful.  I miss snow.  Leaving aside global warming, the Wirral is surrounded by water, so we rarely get a decent flurry.  I'd love to experience that thick, deep mass of snow, the type that silences the streets and makes you hide inside with a cup of tea to watch it fall.  It's easy to forget in our gleaming modern Britain that we're still at the mercy of nature; a hard cold spell and the Pennines become a divide separating east from west.  I wanted to come back when there were closed roads just to see the Snow Board in action. 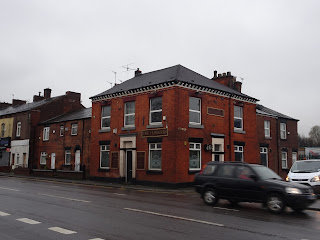 And there are pubs.  Most of them are closed, I will admit; converted into tyre places, or houses, or just boarded up and waiting for a developer.  But there are still pubs, and when they've got names like The Cloggers, they need to be applauded. 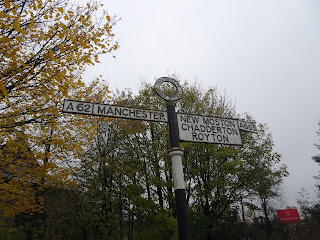 When I finally turned off the Oldham Road into Failsworth, I got a delightful little surprise.  Gerry Shields Cycles has been in operation since 1948, and, judging by the signage, hasn't been updated since about 1958.  It's great. 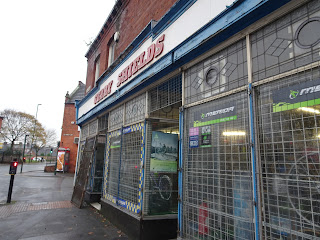 That font is pure Festival of Britain and I applaud it.  If you're in Greater Manchester and you're looking for a bike for Christmas, I urge you to buy it with Gerry Shields rather than at Halfords.  I'd hate it to close and be turned into a kebab shop.

I walked towards the centre of Failsworth, pausing only to wonder about the man pulling a cool box full of bits of wood as thought it was perfectly normal thing to do, and found the stop either side of a bridge. 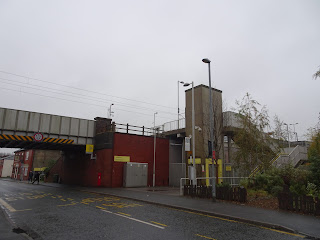 I initially typed "station" there, which is in some ways more accurate; Failsworth was a station first, and it still has a vague railway air.  It's bigger, more imposing.  I climbed the steps to the platform, high enough that I could see the tower of the Russell Hobbs factory in the distance.  There was no ticket office, no waiting room, but it still felt undeniably solid and railway. 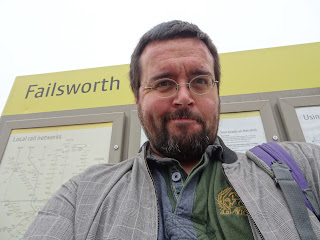 Hang on, haven't you been to Navigation Road? That's a single platform Metrolink stop! (Yeah, okay, there are two platforms... Just only one Metrolink one!)

I totally remembered Navigation Road, but I discounted it because there are, technically, two platforms. No really, I DEFINITELY remembered it.