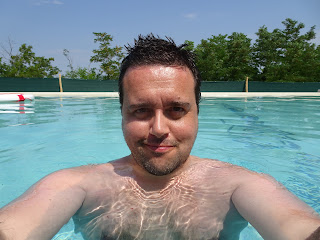 As mentioned in my last blog post, I've actually been away.  I had a week in Croatia, sunning myself in a villa near the town of Motovun.  It was mainly a relaxation holiday, one of those ones where you sit by the pool with your iPod playing and reading a book and turning brown.  As such there wasn't much opportunity for railway-based antics.

I was in the wrong bit of Croatia anyway.  As a country, it mainly splays across the Balkans, with a long strip down the Adriatic coast.  Right on the edge, jutting out into the sea, is the Istrian Peninsula, and that's where I was staying.

Istria does have its own railway, running up through the centre from Pula towards Ljubljana in Slovenia, but it doesn't connect with the rest of Croatia's network.  This is a relic of the old Yugoslavia, when it was all one country and it didn't matter that you couldn't get a train from Pazin to Zagreb without going via Slovenia.  There are plans to connect Istria to the rest of the country, but it involves a lot of expensive tunneling, so for the time being Istria remains a backwater in the national system.

I decided to be kind and not force the BF to take me to the railways, much less travel on a train; it was meant to be a holiday after all.  However, after driving up the coast, we passed a sign and I found myself burbling "therewasarailwaystationdownthere."

I feigned insouciance.  "Yeah, I suppose, I'm not really bothered."

We'd arrived at Lupoglav station at a busy moment; a shift change.  One man walked out of the station building and went over to his mate and began talking. They turned and stared at me as I started snapping photographs.  I don't speak Croatian, so sadly I couldn't explain "I collect railway stations".  Actually I'd have problems explaining that in English. 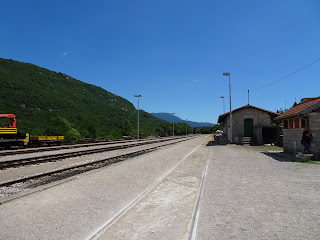 Lupoglav's station building was wonderfully Eastern European.  The front had been enclosed with a brown porch, the kind of utilitarian construction that carries the whiff of 1970s construction.  Inside was a bench and timetables and a grinding air conditioner. 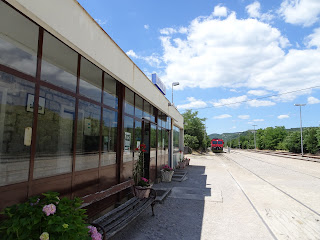 I went in, past the cast iron ashtray with a few fresh cigarette butts, and into a superbly old-fashioned ticket office.  Wood paneling and a brown and cream tiled floor; a battered bench and a glass window with a hole cut in it.  It was gloriously Communist.  It just needed a framed portrait of Tito on the wall and I could have lived out all my "desperate defector trying to flee to the West" fantasies. 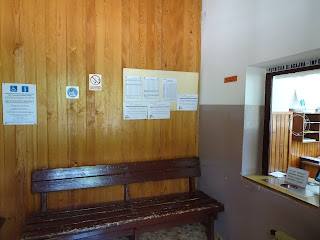 Despite its silent atmosphere, Lupoglav actually gets a half-decent service.  There's a train roughly every two hours in each direction - not bad for a town of only 929 people. 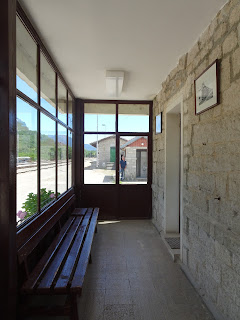 There was a grinding of engines outside.  One of the stilled trains had stirred into life, and the BF and I stood on the platform in the hope we'd see it pass.  I say platform: it's more a vaguely humped area by the side of the tracks.  It's certainly not the high slab of concrete you'd expect on a British railway station.  I wouldn't fancy being a tiny old lady trying to board here with a suitcase. 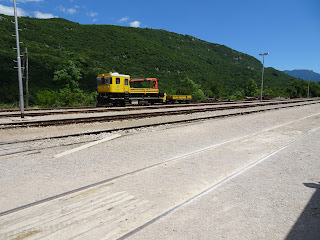 The train continued grinding its diesel engine - electric trains have reached the main Croatian railway network, but not here - but there was no sign of it moving.  Eventually we melted under the gaze of the two railway workers, still staring at these tourists taking pictures of empty tracks, and got back in the car. 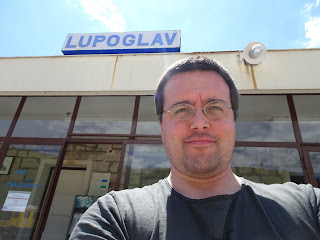 The only other station I visited was Buzet, further north.  We'd spent a pleasant hour wandering round the quiet hilltop town that gives the station its name, and when we were done, I suggested we drive out to the railway.  It was quite a way; this photo of Buzet was taken halfway between the town and the station. 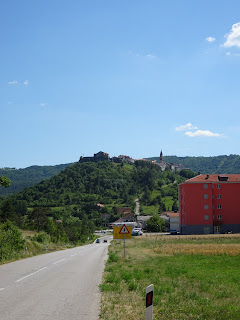 There was still a climb up quiet mountain roads after that.  In fact it's so far away, calling the station "Buzet" seems like a bit of a con, like those airports Ryanair flies to that turn out to be an eight hour bus ride distant from the place you want to visit. 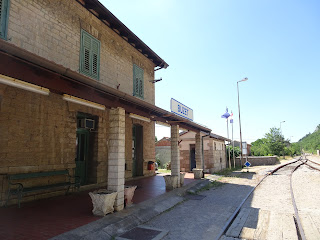 What Buzet station does have going for it is the glamour and excitement of a frontier station.  This is the last stop before you cross the border, and so there are signs welcoming you to Croatia and the flutter of flags.  Admittedly, thanks to the EU and Schengen, there's not actually anything to denote a frontier, no passport control, no stern looking guards.  Just a friendly hello to international visitors and oh for the love of God why are we leaving the EU again?!?! 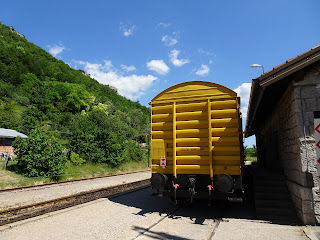 There was a police station by the line, though it looked locked and closed; perhaps it comes to life when a train passes through (once again, we'd arrived between scheduled stops).  There was also an unfriendly looking man in the ticket office who didn't appreciate me poking my head round the door; I beat a hasty retreat. 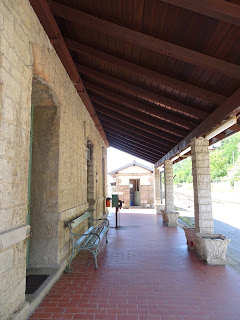 No porch, either.  Buzet was definitely better looked after than Lupoglav, as you'd expect from the first station over the border.  Present a clean smile to the new arrivals and all that. 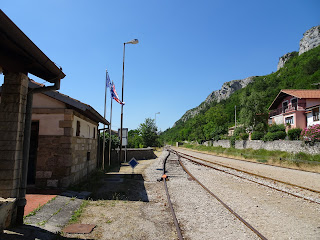 Also, unlike British railway stations, you didn't have to pay 30p to use the toilet. 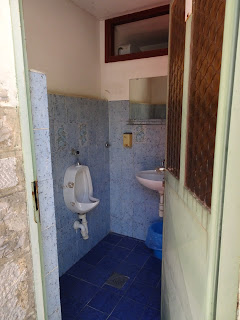 I may have been facetious up there, but there is something exciting about a border station.  I could've got on a train there and ended up in Slovenia.  A change at Ljubljana and I could've been in Italy, in Austria.  So much more exciting and glamorous than the grim grind of air travel, passing through anonymous departure and arrival halls that all look the same, taking off your shoes and your belt, queuing over and over.  This was proper international travel.  A part of me wanted to jump on a train and just go somewhere.  Anywhere.

The BF coughed in the background, and I slipped out of my daydream and we went back to the car. 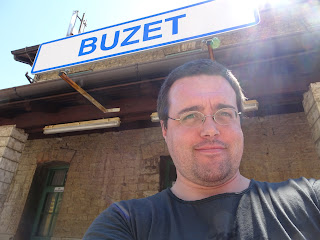 Actually, there is border control between Slovenia and Croatia, as Croatia hasn't joined Schengen yet.

And unfortunately there aren't any cross-border trains here - Buzet is the end of the line for now and the trains on the Slovenian side stop at Rakitovec.