I'm afraid it is not good.  It's simultaneously too simplified to work, and too complicated to understand.

The essential problem Metrolink's designers have to grapple with is that there is a central part of the map which is shared by multiple lines.  The normal way to show this would be to colour each route differently, then parallel the lines - as happens on the top of the Circle Line, for example:

The three lines - Metropolitan, Circle and Hammersmith & City - share the tracks beyond Baker Street, and so they share a space on the map.  It's chunky, but it's easy to understand.  This can get excessive, as happens in Frankfurt: 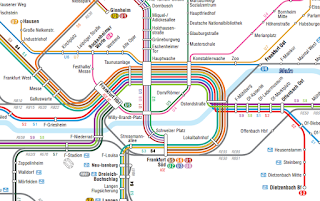 ...but at least you can understand what's going on.  Follow the colours.

For some reason Metrolink have eschewed this approach.  I don't know if it's a desire to keep the map tidy, or if it's a commitment to the corporate colours, but every route on the map is shown in one shade: grey.  The positive of this is that the central City Zone doesn't need to have thick bands of colour running through it; a single silver line is adequate.  The downside is everything else. 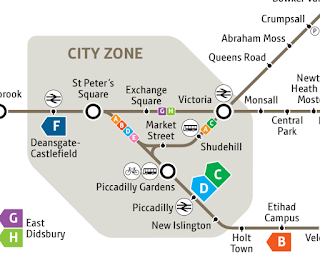 The way the designers have showed the different routes is to stick coloured arrows at each end of the line, with a key in the corner.  Altrincham to Etihad Campus, for example, is the orange B:

It's not friendly.  It's a designer who has worked out a way of doing something when there's a perfectly sensible way of showing different routes.  It's a solution to a problem that didn't exist.

And go back to that City Zone map, above.  There's a triangle of routes passing round the city centre but to see where you're going - whether you're heading for Shudehill or St Peter's Square - you have to squint at some tiny boxes.  Those D and C arrows at Piccadilly both seem to be pointing in the same direction, but C goes to Victoria and D doesn't, and A skips Piccadilly altogether - or does it?  Does it reverse and go back out?

Imagine landing at Manchester Airport, and trying to work out how to get to, say, Crumpsall.  Your blue F stops at Deansgate-Castlefield, so you need to change to a different tram.  You find Crumpsall, go to the end of that branch, see it has an A and a C; track back down the route to find if those two go through Deansgate-Castlefield, squint to follow the little boxes on the routes in the City Zone (where there are grey route lines on a grey background), find the A swings back up, follow that line to Altrincham just to check it passes through where you'll be.  Swear repeatedly.  And then, by the way, the tram comes into the stop and it doesn't have an A or an F or a C on the front; it just has the name of the terminating station.  So those little coloured arrows don't really have much point beyond the map. 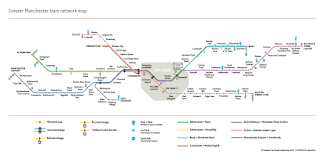 Infinitely better.  Not only is it easier to read, the colours make the map seem more exciting.  The old map was closer to art than the tedious route diagram we now have.  It copes with seven colours with ease, and could easily take a few more; the current map has eight different routes, but the second city crossing means East Didsbury trams bypass to the north and don't need to cross the others.  It's fun.  It's simple.  It's great.

I have complained about this on Twitter, because I am a white middle aged man and so complaining about stuff on Twitter is my main hobby, and TfGM replied to say that a revision to the map was underway.  They were a bit cagey about how much of a revision it would be though.  I don't mind the basics of the map - the lines are in the right place, the font is lovely, the Park and Ride and railways circles are cleverly deployed - it's just that it's not very good as a wayfinding tool.  Which means it's rather missing the point.
Posted by Scott Willison at 13:39

Your writing is always such good value.

The map was re-designed from colour to monochrome in response to feedback from the Metrolink disability users committee (in order to cater for those who may be colourblind). As you say though, it's a hot mess. I agree with the need to make it accessible to everyone, but there surely must be a better way?

That sounds like a very lazy justification for turning the map silver. Maps all over the world are in colour, and transport networks consult with disability groups to ensure that colour blind users are catered for. TfL produces a map specifically for colour blind passengers, for example. And Metrolink's decision to use soft pastel colours for all their lines can't have helped. There's only the City Zone where lines are in parallel - careful choice of shades means you can have them run alongside one another and still be legible for those who are less able to discern between colours. You just need an expert to help you choose, and it sounds like TfGM just went "make it all grey, that'll solve the problem on the cheap."

I've said it before and I will say it again. It's a bag o shite.