I need to start with an apology.  I did you a disservice, Derby.  I just wasn't in the mood.

Derby is the most far-flung outpost of the Northern map.  There are other stations that are quieter, more isolated, more northerly, but Derby is tucked away at the bottom on a limited services only branch.  This is pure East Midlands Trains territory, and whatever beef I had about visiting Nottingham, take that and treble it for Derby. 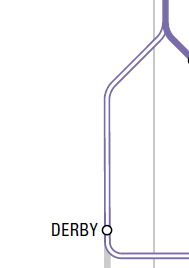 In fact, a quick glance at the new Northern timetable reveals that their only Derby services are a Nottingham-Leeds one that calls at Derby at 2108 on a weeknight and a Leeds-Nottingham one that's "set-down only" at Derby at 0545 on a weekday morning.  It shouldn't be there.

Add to that a two-and-a-half hour journey to get there (via a change at Sheffield), terrible weather, and a scalded hand from a takeaway cup of tea with an inadequately affixed lid, and I was not in a good state of mind when I arrived at Derby Midland.

My initial impressions were bad, too.  I left the station and encountered a row of tawdry shops - a taxi firm, a kebab shop, a "spa" that offered "assisted showers" - I don't think that meant it had a hand rail for the disabled.  There was something a little different to the side, something that sparked a memory for me though: a row of railway cottages. 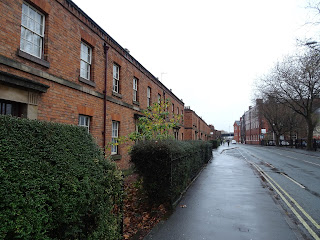 I had an InterCity from Luton to Derby, then a different train to Stoke-on-Trent, and now that I was here I remembered leaving the station for a look round.  Anxiety about missing my next train, plus a realisation that the actual town centre was half a mile away, meant that I soon turned round and headed inside again, but I remembered those cottages.  They stuck in my head.  Admittedly, in my memory, there were cobbles outside, but that may have been my subconscious Southern bias. 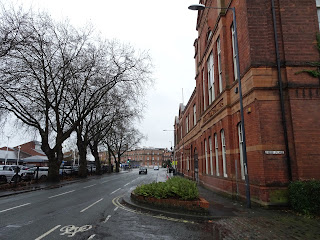 A little jollier thanks to that flash of memory I headed for the town centre past a colossally ugly Royal Mail depot and curry houses that catered for the drunk and the stag.  Heavy rain hammered at me; the nation was still in the process of getting rogered by Storm Clodagh.  Wet pavements provided the perfect conditions to send me sprawling. 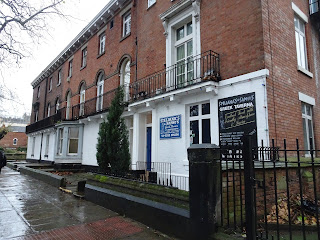 The Derby Royal Hospital shipped out of the town centre a few years ago, but after years on the market its former site on London Road was finally being redeveloped.  I was sad to see what looked like an interesting modernist building was in the process of being torn apart. 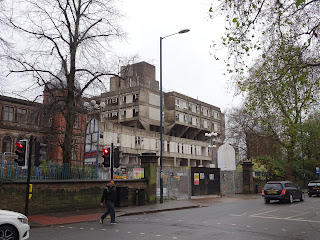 I was even sadder once I hit the town centre and realised it had pledged itself to THE MALL.  intu Derby - the lack of a capital letter is very much their fault - seemed to fill every gap in the streetscape, so that even when you were walking down what seemed like a perfectly reasonable road, an entrance to THE MALL popped up.  It seemed to want to suck you in. 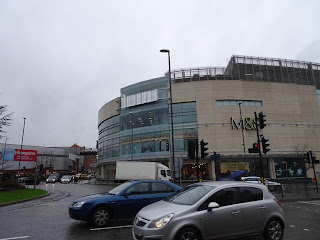 I resisted, even though a covered shopping centre would have stopped me drowning for a moment, and instead pushed on into the town itself.  I expect a legion of Derby residents will be furious with me for suggesting this, but it was very much like a smaller, less grand Nottingham.  Pedestrianised streets and the occasional bit of Victorian grandeur. 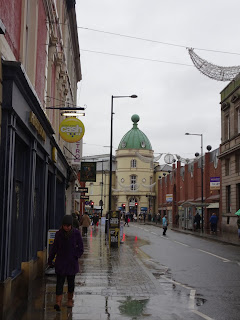 I ducked down a side alley, and found myself in the Market Hall.  Its impressive arched roof caught my attention, but I noticed it wasn't anywhere near as busy as the rest of the town.  That MALL again, I suppose. 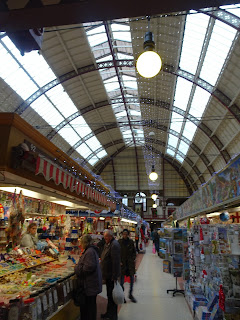 I realised I wasn't enjoying myself at all.  The rain, the half-heartedness of the town centre, the knowledge of that three hour journey home - it was all sitting on top of me. 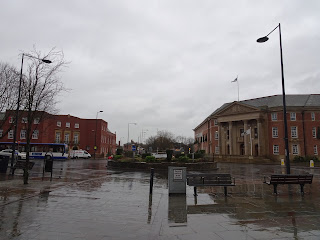 The sad hulk of the burnt out Assembly Rooms - due for demolition - detracted from an otherwise fine bit of civic pomp.  They'd put an ice rink out front, but it was deserted.  I headed down to the river, hoping for a bracing view, but it was relentlessly grey, and much of the banks were in the middle of being redeveloped.  The waterline looked disturbingly high, too. 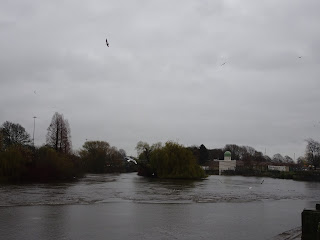 Nope, I thought: nope.  I'd had enough.  I was going to head back to the station. 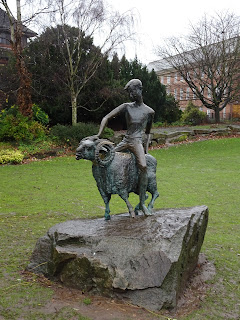 I walked past another failed bit of regeneration - a Hampton by Hilton being converted to a Premier Inn - with a sadness.  I don't like finding places lacking; joy is infinitely preferable to disappointment.  I just couldn't get in the groove with Derby.  It meant that I never got to see Lara Croft Way, the bit of the ring road named after the busty heroine (she was created in the city), but it was just a stretch of dual carriageway.  I don't think there was an actual statue (give it a couple of years and a misguided Kickstarter campaign, like the Detroit Robocop).  Instead I got caught up in the bus station access roads, darting across one way streets to find a bit of pavement; though at least that took me to a bit of the city called The Cock Pitt and I got a cheap laugh. 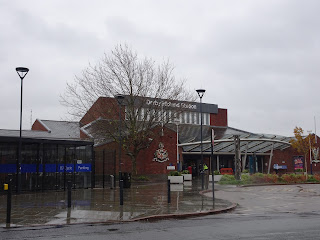 Despite being a railway town through and through - it's the only place that still builds trains - its station is a disappointment.  The original building was demolished in the eighties and replaced with the one you can see above.  The crest of the old railway company was retained and stuck on the outside wall, a bit like marrying a younger woman then grafting your first wife's face onto hers. 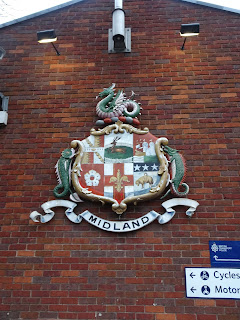 I was going to buy a baguette and a cup of tea from the Upper Crust in the cramped little ticket hall, but the two ladies ahead of me seemed to be baffled by the entire concept of french bread with a bit of ham in it and were taking an age to decide.  Instead I headed back to the platform to wait for a pootling diesel train to Crewe.  My last station in Derbyshire, done.

So yes; I'm sorry Derby.  You just didn't grab me.  Maybe I'll come back another time and try again.  Apparently my preferred interval for visits is 21 year.  See you in 2036! 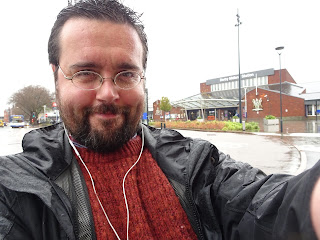 Jones the Planner has written up his impressions of Derby here

He pretty much thought the same thing as you did - a potentially interesting East Midlands city ruined by speculative tat and that bloody mall.

I have to admit I'm thrilled that Jones the Planner and I are on the same page. I love his site.