You know people?  People in general?  Annoying, aren't they?  Their foibles, their prejudices, their way of stinking and moaning and complaining and just ruining things for everyone?  People are just so annoying.

I was reminded of this when I was in Maghull yesterday to see an exhibition about a proposed railway station. 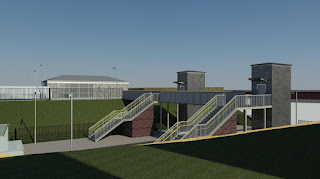 Here's the situation: on the fringes of Maghull, right at the limits of Merseyside, is Ashworth Hospital, the high security institution.  It used to spread over two sites, but a few years ago the southern site was closed and demolished.  First it was earmarked for a prison, but then the government changed its mind and decided to build hundreds of new homes there.  Merseytravel nipped in quick, pointed out that it was right next to the Ormskirk branch of the Northern Line, and suggested a new train station might be a good idea.  Sorted!

The exhibition at Maghull town hall was to show the plans to the locals and allow them to express their feelings about them.  And goodness, they were keen to express them.  I stepped into a small room full of pictures and maps and some incredibly furious people.  They were haranguing the three or four members of the Merseytravel staff.  I heard complaints about the car park layout and the lack of acoustic fencing and the sheer inconvenience to them this new station will cause.

And here's the thing: I don't understand a single one of their objections. 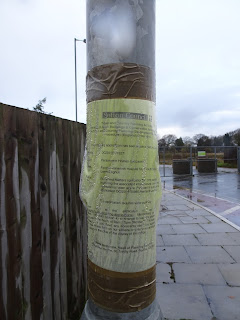 I'd been out at the site of Maghull North that morning, in the middle of a relentless, unpleasant rain storm.  It was miserable and wet, with cars whizzing by and splashing the pavement from puddles in the gutter.  I found the roundabout that will lead into the new housing estate, and the fenced off entry to the development site. 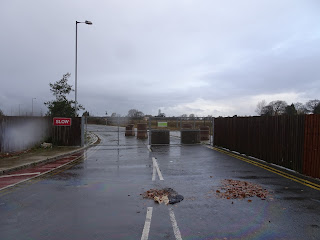 A bit further down the road was the bridge over the tracks.  According to the Merseytravel website, by 2017, this site will look like this: 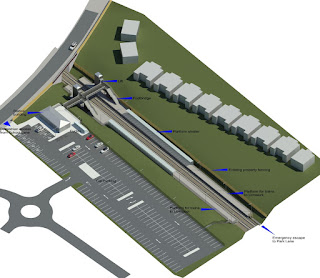 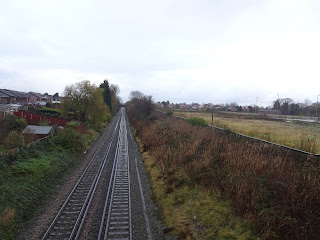 And this is why I didn't get the objections.  Remember, on the right hand side of the tracks, there is a secure hospital for the criminally insane and a prison and a motorway junction.  This is not bucolic, fragrant, England's green and pleasant land.  When Ian Brady is one of your neighbours, it's pretty hard to lower the tone. 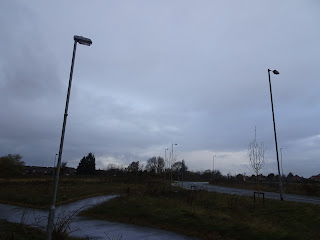 A new railway station will improve life for everyone.  A fast, frequent service to Liverpool and Ormskirk.  A manned station building to discourage anti-social behaviour.  A park and ride facility, close to the M58.  Full access for the less able.  Relief for Maghull and Ormskirk stations, both of which are in the top ten busiest stations on Merseyrail.

I'm biased, I know.  I just can't see the downside.  There are studies that show living within walking distance of a railway station can add 10% to the value of your home.  It'll help alleviate the pressure on the local roads from those hundreds of new houses.  I mean, the railway line's already there: there are already electric trains whizzing by eight times an hour, nineteen hours a day. 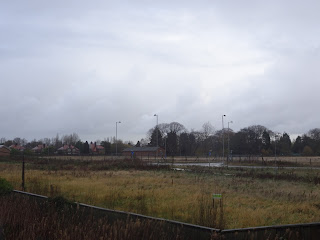 I heard a woman at the public exhibition describe the plans as a "disgrace".  Perhaps she was an architecture critic; the station building is a bit perfunctory.  More likely she was just "people".  People are annoying.

You can comment on the plans for Maghull North here.  Please say something nice.
Posted by Scott Willison at 13:30

Some years ago Transport for London put out an idea to divert a half hourly mini-bus service to run on a street near my house to make it more useful and to serve more people. It would replace part of the route which has no bus stops and is poorly used so is bad value for money. Because it would remove a width restriction, they'd put in cameras to monitor - and fine - HGVs going that way. The bus would be hail and ride.

They put a bus in the street one Saturday so people could see it and answer questions.

The way some of the locals reacted, you'd think that they'd proposed a high intensity double deck bus service running ever three minutes down the road. Oh and all car parking space would be lost and every HGV in the known universe would be suddenly using the road. It would be HELL ON EARTH.

So TfL listened and went away. They came up with a new plan. This time there would be a height restriction so that HGVs couldn't get down there, and some moveable bollards and things. Basically only minibuses would get through.

The protests continued. There were petitions. There were mass campaigns. And there was a LOT of mis-information. I actually had to tell someone who came to my house to look up what he was objecting to because he was plain wrong.

"There's going to be a height restriction," I told him. "There's absolutely no way that a HGV could get down there. Go back home, look properly at the plans." I added.

He ignored me and went knocking on more houses, spreading the same fear and misinformation.

TfL eventually canned the scheme because people like him spread so many lies and crap. A useful bus service that could have taken cars off the road and been valuable to local residents, was prevented.

I suspect the people you saw are related to them.

I am continually surprised by the amount of seething fury that so many middle-aged people have over inconsequential things. For example, see the reader comments following any newspaper article about the McCanns. The sheer effort people must put into nursing those hatreds - well, it doesn't bear thinking about.

What were the main objections? Traffic congestion at the station car park, gangs of hoodies hanging around on the platforms, or a new fast getaway route from Maghull for thieves and robbers?

Andrew, I had a similar experience with a door stopper. The fire station in town was going to be redeveloped and so there was a proposal to resite it to a TA base near my home while the works went on. A guy came to the door with a petition against it and reacted with bafflement when I said I had no objection.

Chris, from what I overheard the principal objection was just "I don't want it."

I think next-year I'm going to go trick-or-treating in suburbia dressed as 'change'.

Seems a good idea - I've always thought that a long gap. Nearer to the modern centre of Maghull than the existing station, too.

Should it perhaps be built with a reversal siding or bay? I think there would be potential to increase service frequency south of Maghull but not so much north of it?

Should also get round to building Burscough Mill Dam Lane as well.

We are having similar issues at the south end of the Hayes line which TfL want to integrate it into the Bakerloo Line. Great. High frequency all day every day (not just 2tph on a Sunday) straight into the west end and beyond. What could be better? No, say some locals, the trains will be shorter and won't go to Cannon Street. Even though nearly everybody on the Cannon Street trains changes for Charing Cross is on the Bakerloo line throughout the day. They've got to change trains from one frequent service to another frequent service on their journey to work so the rest of us can't have something better. I've even heard it suggested that the frequency will be lowered. Oh right, a tube service that runs less than four trains an hour is really likely isn't it?

You need to watch people like that. Same sort of people stopped the Wimbledon Loop ever getting a service increase. If there hadn't been a battle to keep through trains to Bedford, instead of stopping every train at Blackfrairs, the Loop could have had double the frequency. Now, no chance.

All for the sake of a few seconds changing at Barbican.

Don't lose hope Andrew. The whole new Thameslink timetable has to start by accommodating the loop service as loops are so difficult to keep to time; and then trains on the Midland and East Coast main lines are affected too. If it becomes unworkable I suspect the loop service will be terminated at Blackfriars and they will have to lump it. I found the decision particularly annoying as almost everywhere on the Wimbledon loop is well served by other routes and it cost the Catford Loop 2tph which is for the moment stuck with probably the worst service in London for zone 3/4 stations.

Problem is, the NIMBY generation are retired and very bored. They used to write letters to the papers, but I don't think that exists any more, so this is the next best thing.

I would recomend that you look no further than Parry Glasspool as Harry Thompson in Hollyoaks. local to home as well