Tits, and an Ass

I'm thinking of starting a petition.  Perhaps one of those 38 Degrees campaigns.  It's called, "get Nottingham off the Northern Rail map". 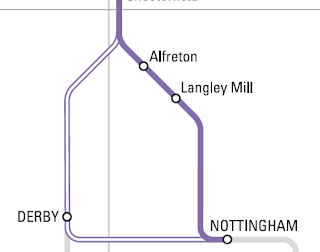 It doesn't belong.  This is a NORTHERN map, not "NORTHERN, plus some bits of the Midlands".  I mean, Stoke-on-Trent is pushing it.  Nottingham is the Midlands and it has no place on that map.  And don't even get me started on Derby.  "Limited Service" - yes, mainly limited to driving me into a RAGE.

Still, while it is on the map, I had to visit.  Fortunately there is a direct Liverpool-Nottingham train; less fortunately, it takes three hours to get there.  This is a ludicrous state of affairs.  If you want to travel north-south in this country, you move faster than Concorde on speed; go east-west, and you'd best have packed a good book. 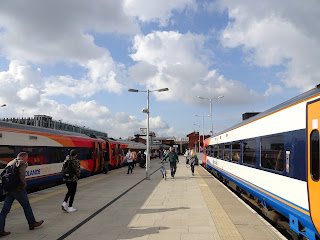 To add a positive note to what has, so far, been a slightly fractious blog post: Nottingham station is great.  It's recently had an overhaul in connection with the tram extensions, and it's worked very well.  Walk down the incredibly long platforms and you pass red platform buildings, carefully restored. 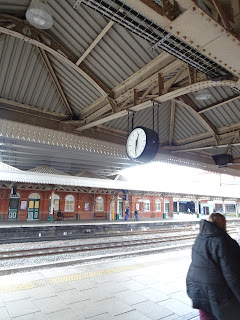 Because it's principally a "through" station, Nottingham doesn't have the opportunity to dazzle arrivals with an ostentatious roof or a staggering display of fretwork.  Instead, when you climb the stairs to the station building, you get a beautiful space. 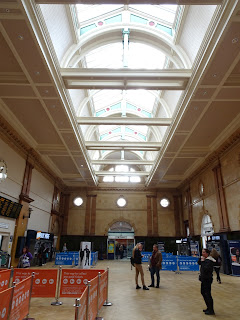 It's wonderfully open and light.  The tiles on the walls, while extremely practical, also add a gleam to the ticket hall. 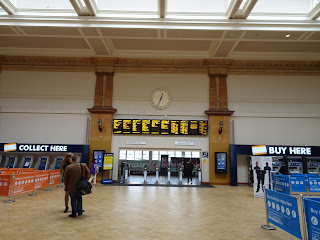 The building dates from 1904, surprisingly late for such an important station, and it definitely feels more modern than its slightly overbearing Victorian cousins.  That clock, for example, is understated elegance.

The redevelopment works have helped with that feeling of openness.  The front of the station was a porte-cochere; very handy for pausing with your coach and horses, a bit of a dead space in the 21st century.  As happened at Newcastle, the front has now been glassed over, meaning that the retail outlets don't crowd into the ticket hall. 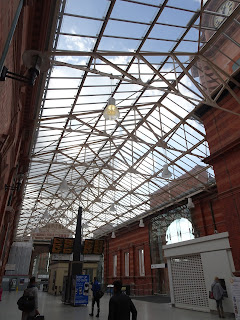 The coffee shops and Morrison's Local cluster here, leaving the area for railway customers uncluttered.  It means you can stare up at that magnificent clock tower without getting wet in the rain. 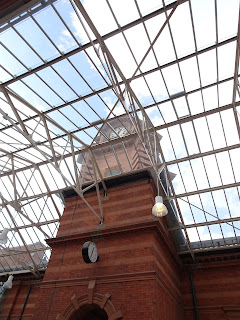 The terracotta tiled frontage is just as impressive, though you have to dart across a busy road to get a decent look. 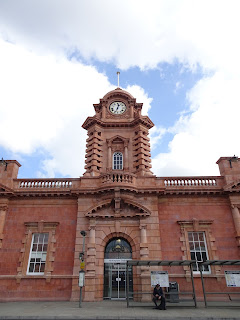 The works are still ongoing to fully restore the look of the station.  I love that this is how we're rejuvenating our cities; turn to the railway stations and make them better.  Make people love them. 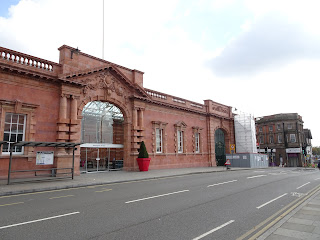 As usual, my main complaint is the poor quality of the signage.  I found the British Rail totem behind hoardings at the worksite end of the station; I suspect it'll be taken down soon. 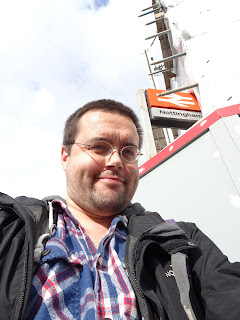 After my three hour train journey, I was tired and hungry, and I needed some food to pep me up before I started exploring the city.  Luckily, there was somewhere to eat just round the corner. 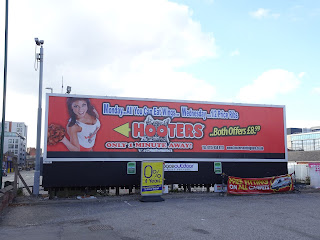 Hooters is an American chain of restaurants whose emphasis is on chicken wings, beers, sports and, of course, women with large breasts.  You can see why I'd want to visit. 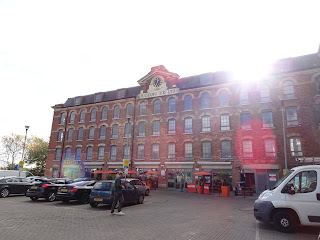 Actually, the idea of Hooters has long fascinated me, because I don't understand it.  I don't understand why you'd want to visit a restaurant where the waitresses are big-boobed.  A strip club, yes; you get to see naked people.  A regular restaurant, yes; you get to eat good food.  I don't understand why you'd want to go to a place just because of cleavage.  The girls aren't going to take their tops off, so it's not like you're going to get a thrill.  They're just going to walk around with breasts, and I don't know if you knew this, but all women have breasts.  Regular waitresses in normal ordinary cafes have breasts, and they are just as likely to whip up their shirt and reveal their nipples to you as the girls in Hooters - i.e. they absolutely won't.

(I should add that this inability to understand is not based on my general lack of interest in boobs in general.  If there was a restaurant where all the waiters were hunks in g-strings, I still wouldn't understand why people would want to eat there.)

Adding to the fascination is the fact that Nottingham is Hooters' sole UK branch.  They've tried in other places, Cardiff, for example, and they were horrible flops and soon closed.  Which makes me proud to be British, to be frank.  Nottingham, however, manages to cling on there, and is actually one of the biggest restaurants in the chain.  I had to visit it, really.

Normally I'd feel awkward about eating alone, but I figured Hooters was the kind of place that regularly got lonely male diners.  My waitress showed me to my seat and I took a look at the laminated menu, trying not to think too much about the roll of kitchen paper on the end of the bench.  I guessed it was for tidying up after eating sticky chicken wings, but in this kind of place, who knows? 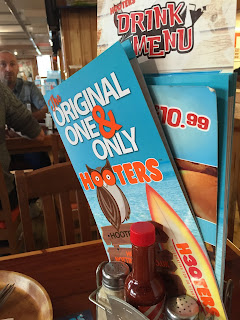 The building that housed Hooters was a converted Victorian warehouse, but you wouldn't have known that from the inside.  Here it was all pine paneling and road signs and pictures of girls in bikinis; it was like being inside the bedroom of an American teenage boy circa 1983.

The waitress came over to take my order, and I was took great care to look her straight in the eyes.  She was wearing a tight white t-shirt, cut low to flash her monumental cleavage, and ridiculously tiny orange shorts over tights that made her legs look shiny.  It was a warm day for October, but it was still autumn in the UK: she must have been freezing.  She took my order, and called me "darling", and I felt a little ill.

I live in the north.  I'm used to people calling me "love" and "dear" and "sweetheart".  It's a vocal tick and it's nice.  Here, though, it felt forced and cheap.  "Darling" isn't something British people say, unless it's in a romantic situation. 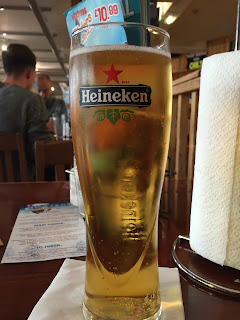 I looked around at my fellow punters.  There were a couple of tables of lads, and three men who looked like they were taking a break from a sales conference.  What shocked me was there were women.  Two male-female couples, tucking into curly fries.  I tried to imagine a circumstance in which any of my women friends would willingly eat in a breastaurant, and all I could think of was "hostage situation".  How do you have that conversation with your significant other?  "Let's get some lunch, preferably somewhere I can ogle the waitresses."  I would have judged them, but they were probably looking at me and assuming I was a sex pervert, so it was a wash really. 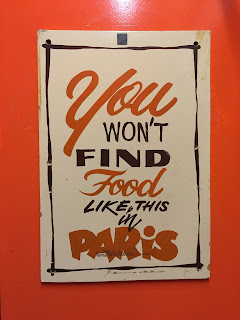 I wasn't enjoying myself.  What had seemed like an amusing little sidetrip when I was in Liverpool had ended up making me anxious and sick.  I was most concerned with letting the waitress know that I wasn't even slightly interested in treating them as sex objects.  Every time she came over, to give me my cutlery or to bring me my food, I made sure my eyes were at least one foot above her nipples.  Which is difficult, because even if you're a big gay, if a woman is thrusting her breasts at you it's very hard to avoid them.  I'd look her right in the eye, then panic that she'd think I was one of those weird patrons who was trying to CONNECT with her on a very deep level, and then I'd end up shifting my gaze elsewhere and stare at a pot plant or something. 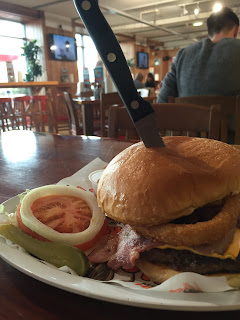 As for the food... it was desperately ordinary.  I decided to forgo the "world famous wings" - "fresh, never frozen" - and went with the Western BBQ burger.  It tasted like a Wetherspoons burger.  That's no disrespect to Wetherspoons - it's plain, decent food for a fiver, with a drink thrown in - but this was a tenner, and you had to pay extra for chips.  Not chips, curly fries: lukewarm twists of potato that were soggy, not crunchy.  I trudged through it, forcing each mouthful.  It wasn't helped by the other waitress - a blonde, while mine had been a brunette - coming over to ask "is everything alright for you darling?" and bending right over the table so that, if I wanted, I could have stared right down her top.  I may have yelped in terror at that point.  I finished the food as soon as I could and, after a stop in possibly the worst bathroom I have ever seen outside of a Starbucks, I paid up and left. 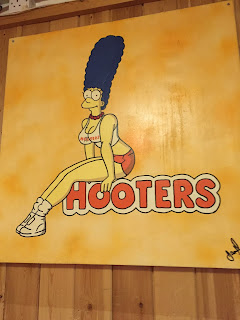 I left Hooters with two over-arching impressions.  The first was surprise at how dated it all was.  Everything about it was Porky's, when it should have been Superbad.  The waitress's outfits (white socks with white trainers?  Really?), the stripped pine, the food - it was all revoltingly naff.  Even the jukebox played mainly 80s and early 90s hits with, bizarrely, the exception of Budapest by George Ezra, which they played twice.

My second impression was how unsexy it was.  I thought it would be cheeky, a bit risque, a bit of a laugh.  It wasn't that at all.  It was deadly serious about how sexy it was, which, paradoxically, made it incredibly grim.  It should have been Carry On, but it ended up as grinding hardcore amateur pornography where no-one is having fun.

Actually there was a third impression: I never, ever, want to go back.
Posted by Scott Willison at 10:32

The salesmen did seem to be enjoying some top bantz.