Autumn is the best season, and I will hear no argument otherwise.  Cold days where your breath crystallises in front of your face.  Breaking out gloves and scarves.  Watching the trees shift through a cycle of colours.  I bought a new jumper the other day and I was genuinely thrilled: no more t-shirts and shorts.  Instead I could wrap myself up in wool and hide in a corner of the sofa.

Winter is too grey, summer is too hot, spring just too damn perky ("Witness the boundless magnificence of nature!").  Autumn brings cold snaps, and mists, and rain storms that hammer at the windows while you drink a cup of tea and watch it fall. 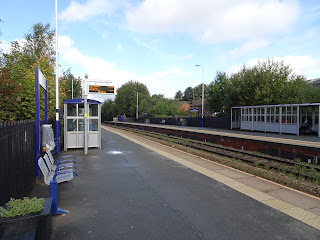 To take advantage of this fantastic season, I set up a trip into the hills of Lancashire.  I wanted rain and grey skies; unfortunately it was one of those atypical warm days, and I peeled off my raincoat with a slight sadness.  I was in Darwen, between Manchester and Blackburn at the foot of the Pennines. 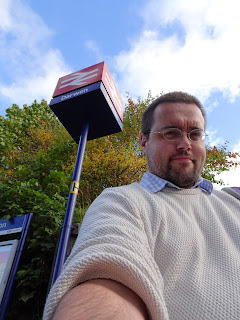 Apologies for the slightly weird photo featuring my apparently eight foot long arm.  I've had to replace my camera, again, after the last one refused to acknowledge when the lens was open and I had to write it off.  I could have got it repaired, but the cost was half the price of a new one, and that's just bad economics.  As with all new gadgets, it takes a bit of time to get used to.  Expect to see the quality of the pictures ramp up exponentially throughout the rest of this blog. 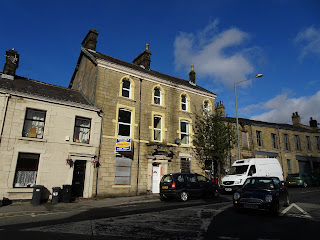 Darwen welcomed me with a boarded up pub and a sandwich board advertising "all your household needs - E-cig flavours 4 for £10"; across the street, a pair of parents stood by watching while their adorable little brat smacked the hell out of a roadsign.  It wasn't making the best impression, and a magnificent chapel with the words A JD Wetherspoon Free House over the top didn't help. 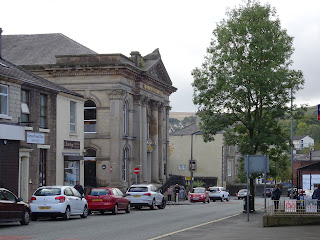 A turn round the corner, and it slightly redeemed itself; the road dropped away into town, so I was able to look beyond the Asda superstore and the multi-storey and see the hills on the other side of town.  There was also the impressive dome of a library, but as is always the case when I visit anywhere, it was the one day of the week it was closed. 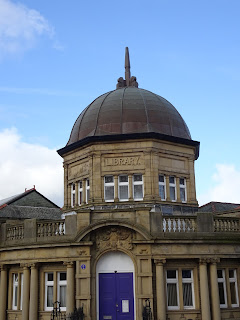 I cut through the half-empty market hall, where stallholders milled around waiting for customers.  The local Rotary Club were selling Lego bricks for a pound to help build a model of the town's Jubilee Tower; they hadn't yet reached the top of the ground floor. 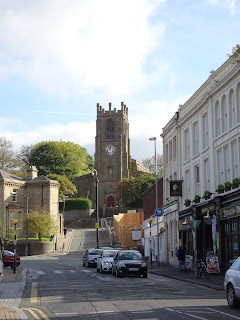 Darwen went from a tiny hamlet to a town in a few short decades, thanks to the manufacturing of textiles, and the town has a uniformity of styles that points to it having come together in a relatively short space of time.  The hefty brick India Mill still stands on the edge of the town centre, now converted into business units, and with the tower visible from pretty much everywhere. 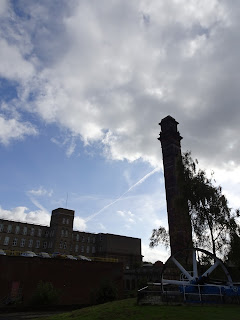 I was heading steadily upwards, out of town and into the countryside.  Terraces of houses slid down the hill away from the main road, interspersed with the occasional brick block of flats. 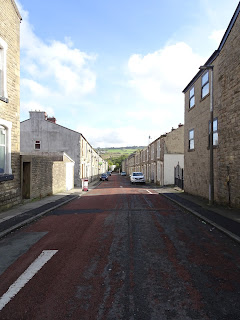 There seemed to be a disproportionate amount of home furnishing suppliers; wallpaper shops and sofa shops and interior decorators.  I thought that maybe the people of Darwen were just really, really houseproud; it turns out Crown Paints used to be based in the town, and anaglypta was manufactured here for years until the factory closed in the early 2000s.  I imagine a lot of these businesses were experts from the old factory making good use of their redundancy money. 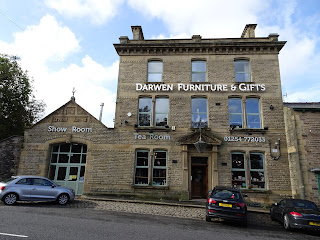 There was another surprise, tucked away to the side of the Bolton Road: a tram turning area.  Darwen was the first town in Britain to get a steam-powered tram network, opening in 1881.  As you can probably imagine, steam trains barreling down the main streets of the town weren't too popular, and they were gone by 1901. 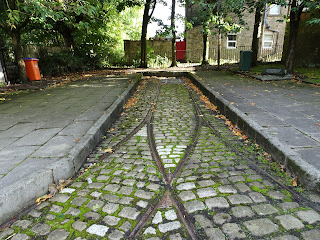 Ignoring the curious stare of a woman with a spaniel who clearly couldn't work out why anyone would want to take a picture of some mossy tram tracks, I pressed on.  Up the hill I continued, my gippy ankle moaning with every step.  This is what it is to get old.  Be warned, youthful readers. 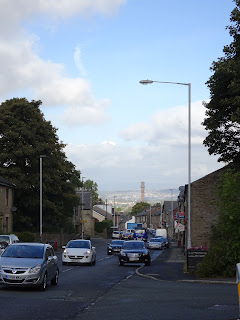 Past the town cemetaries, and then the homes thinned out.  There was a country park built on a landfill site and the single story building of the Ocean Palace Chinese Restaurant.  The countryside began to shift from the manicured, well-tended greenery by the town to the wilder moors. 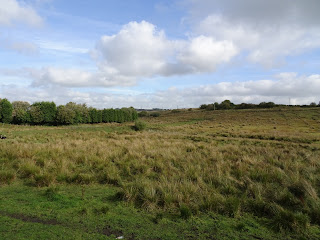 I felt strangely lonely.  There were cars and homes but I didn't see any other people, and it became oppressive.  I began to run through scenarios in my head - never a good thing when you're a depressive with a wild imagination - scenarios where I was alone, the BF dead, me becoming a kind of hermit in one of the farm houses I could see in the distance.  Living off dried food and bread, not leaving the house.  Eking out my days, just waiting for death.

This kind of train of thought is why I am such a big hit at parties. 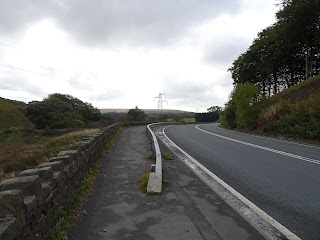 With my own personal rain cloud hanging over my head, I turned off the main road and onto a footpath.  A single sheep stared at me from its enclosure, its face almost quizzical; as I was wearing a white woolly jumper, I can only assume he thought I was some kind of freakishly ugly relative. 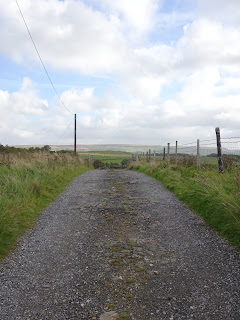 It wasn't exactly a road I was walking on, more a gravelled track, and it was pretty dull.  The scenery was magnificent of course but the relentless crunch of the stones under my boots was getting wearing.  I checked my OS map and found a side path, one that took me over a stile and onto a grassy route through the fields.  Far more interesting. 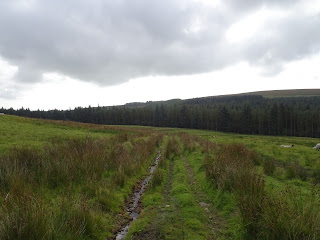 Almost immediately I rolled over on my already fractious ankle.

Still, at least I didn't feel like chucking myself off the nearest ridge any more.  There's a big difference between being lonely and being alone.  On that road, with traffic and houses ignoring me, I'd felt small and unloved.  In the wilds, though, there was no-one but me, and that was actually enjoyable.  I was the only person for miles, and it felt liberating.  Perhaps I would enjoy living in a flint cottage away from civilisation. 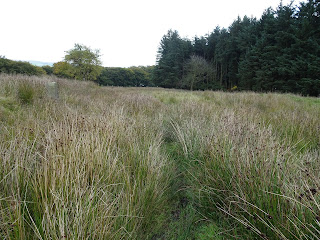 As I got closer to the woods, the ground became softer, wetter.  Hidden bogs sucked at my boots.  Moss concealed swamps beneath.  I darted across them, trying to minimise my tread, until I was on the safety of a needle strewn path beneath the trees.  The air was flavoured with pine. 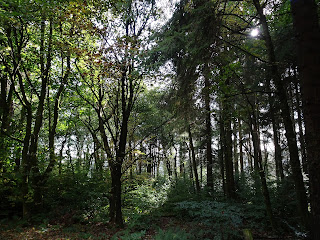 I could see hints of blue through the trees, the still water of the Turton & Entwistle Reservoir.  The idea of being the only person beside that gently rippling lake was intoxicating, and I dashed down the hill to get closer. 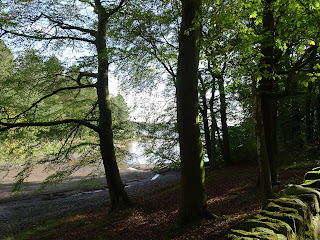 It was a fantasy soon destroyed.  The reservoir itself was gorgeous, of course.  Late morning sun highlighting each movement of the water; the blue matching the sky.  The trees softening the edges and holding it. 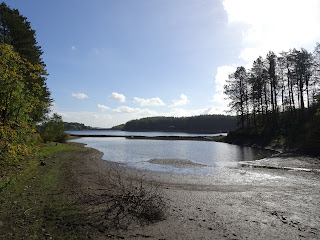 The problem was all the people.  What you can't see in that picture are the two power walking women, yammering in voices that carried all the way across the lake and probably to Clitheroe.  You can't hear the girl and her fiance, discussing the forms she'd just filled in:

Best of luck with your forthcoming nuptials, folks, but for the sake of human society, don't breed. 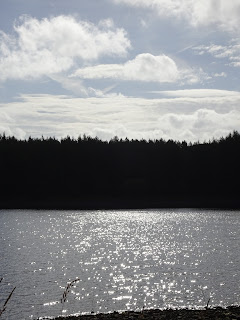 It carried on like that all round the lake.  Grandfathers with toddlers in pushchairs.  Joggers.  Men walking fat waddling dogs.  Fishermen.  I resented all of them, not just for disturbing my peace, but also for getting here the easy way.  They'd all just parked up somewhere and wandered down.  They hadn't tramped over fields full of sheep poo and got their legs soaked by the dew on long grass.  Lazy. 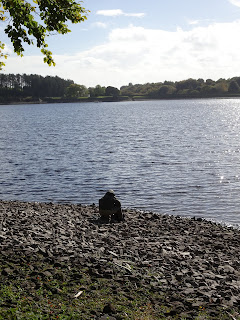 I turned off the lakeshore and instead headed back into the woods, taking an off the map shortcut to the road.  Brown leaves, still new enough to have not dried out, carpeted the forest floor. 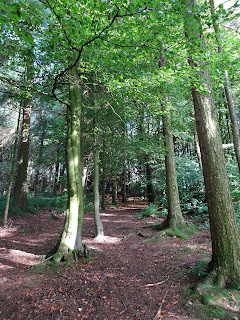 The tiny hamlet of Entwistle snuck up on me.  I hadn't expected there to be houses; I thought the station dropped you in an uninhabited wilderness, like Middlewood,  Instead I had a row of tiny cottages, culminating in an impressive manor house (which is currently for sale). 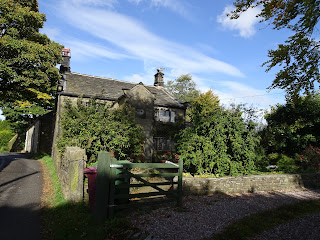 More importantly, there was a pub.  I knew that was going to be there, because my research for this blog usually consists of is there somewhere I can get a pint?  It had formed a valuable part of my Autumn fantasy, where I would stagger into the isolated pub, buffeted by the rain and wind.  I'd get a pint and dry out in front of a fire, while the locals talked in the background.

The warm clear weather may have robbed me of the cosiness, but the Stawbury Duck (sic) was still a pleasing pub, made of different rooms and with a good selection of beer and food.  I ordered a pint and a lamb burger, and sat in the back room. 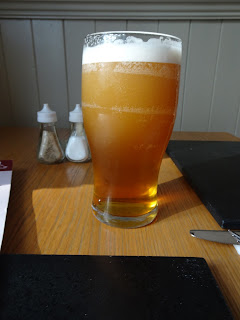 The biggest problem I had with the Strawbury Duck was it was "dog friendly".  I like dogs, and dogs in pubs are obviously ace, but there is one minor flaw: dogs don't always like each other.  Two couples in the main bar had brought their pets in with them, and they had developed an instant dislike (the animals; I'm not sure what the status of the owners was).  They yapped and yelped at one another, taking turns to bark and irritating me thoroughly.  Not the animals - they were just being dogs - but the owners, who just let them get on with it.  The only attempt to bring them to heel was the occasional "shush, Poppy".  How about you move into a different room instead of creating this simmering hotbed of canine tension?

Full of chips and onion rings and beer, I headed down to the station platform, skidding a little (because the tarmac was wet, not because I was drunk, HOW DARE YOU). 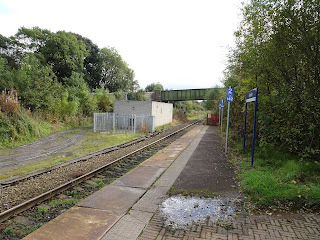 The line's been singled through here, another of those false economies the rail network does in an attempt to hobble itself as thoroughly as possible.  On top of that, Entwistle's a request stop, my first in a long time.  I kicked my heels on the platform ready for the train back to Manchester.  On the way, my hoped for rainstorm finally arrived, but all I could do was stare longingly at it through the window. 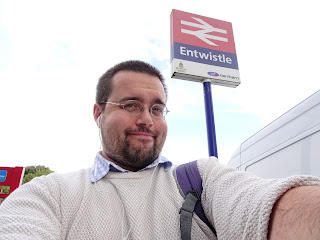 My arm is still huge.
Posted by Scott Willison at 11:51

Autumn is my favourite season too. Clear mornings, early frosts, tea and cinnamon toast, rugby, game in season, leaves, fireworks, port, autumn ales, having places to yourself because its too cold for the jessies, Evensong.....

Season of mists and mellow fruitfulness.

Autumn is all very well, but this blog entry has just sent me on a Wikipedia journey through the history of anaglypta, and wallpapers in general.