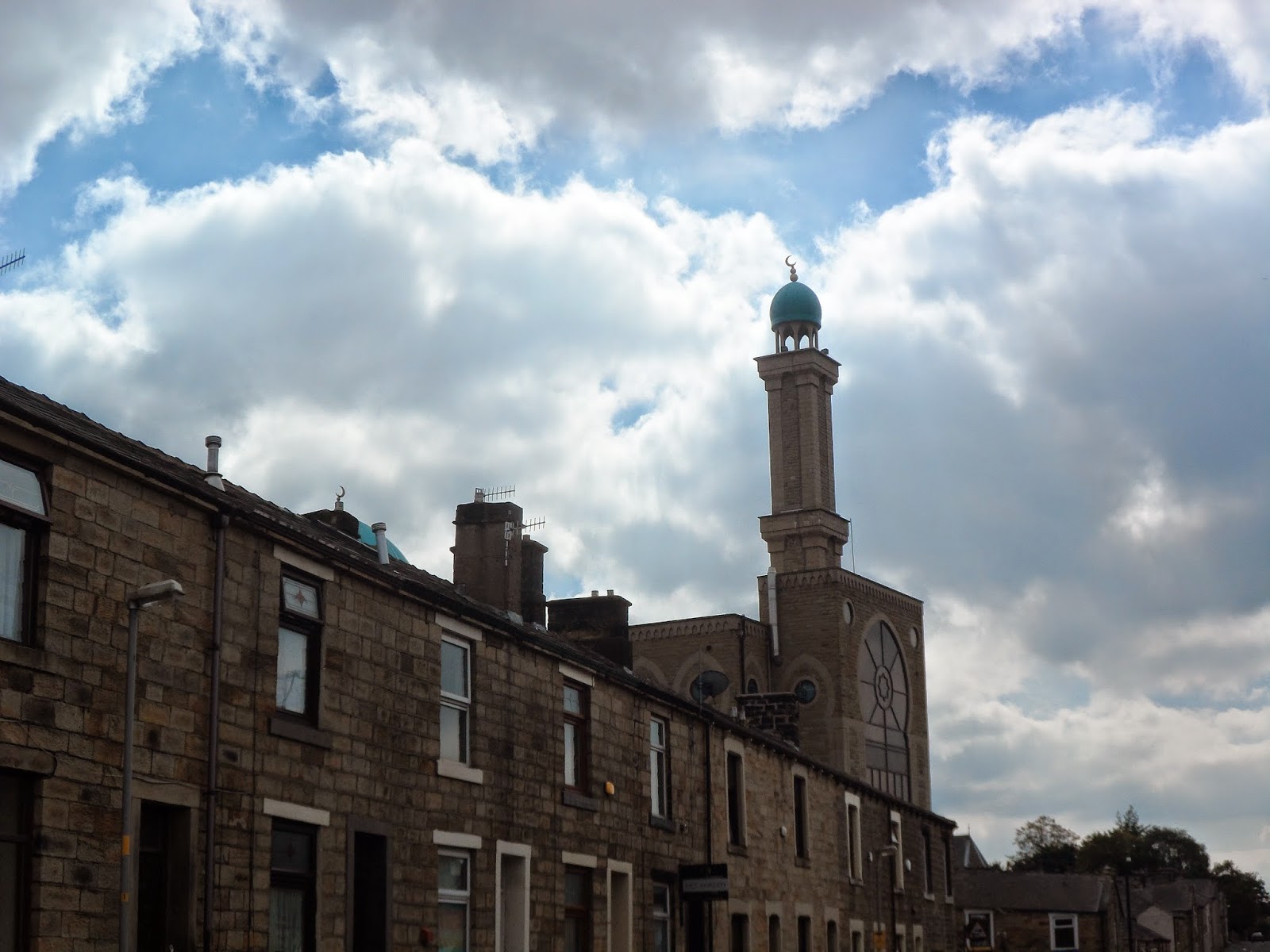 Travelling across the North, there are a few landmarks that you expect to pop up over and over again.  Mill chimneys.  Bleak moors.  Hideous blocks of flats.  Minarets - not so much.  Certainly not outside the big cities.

Brierfield, though, offered up an extremely impressive looking mosque behind its terraces.  A lot of the time new mosques, like new churches, have a slight air of business park about them; as though an architect just pulled out one of his standard office designs and stuck a dome on the top.  Brierfield's mosque was far more prettily designed; still recognisably new, but sympathetic to its history.  I particularly liked that they'd built it out of local stone. 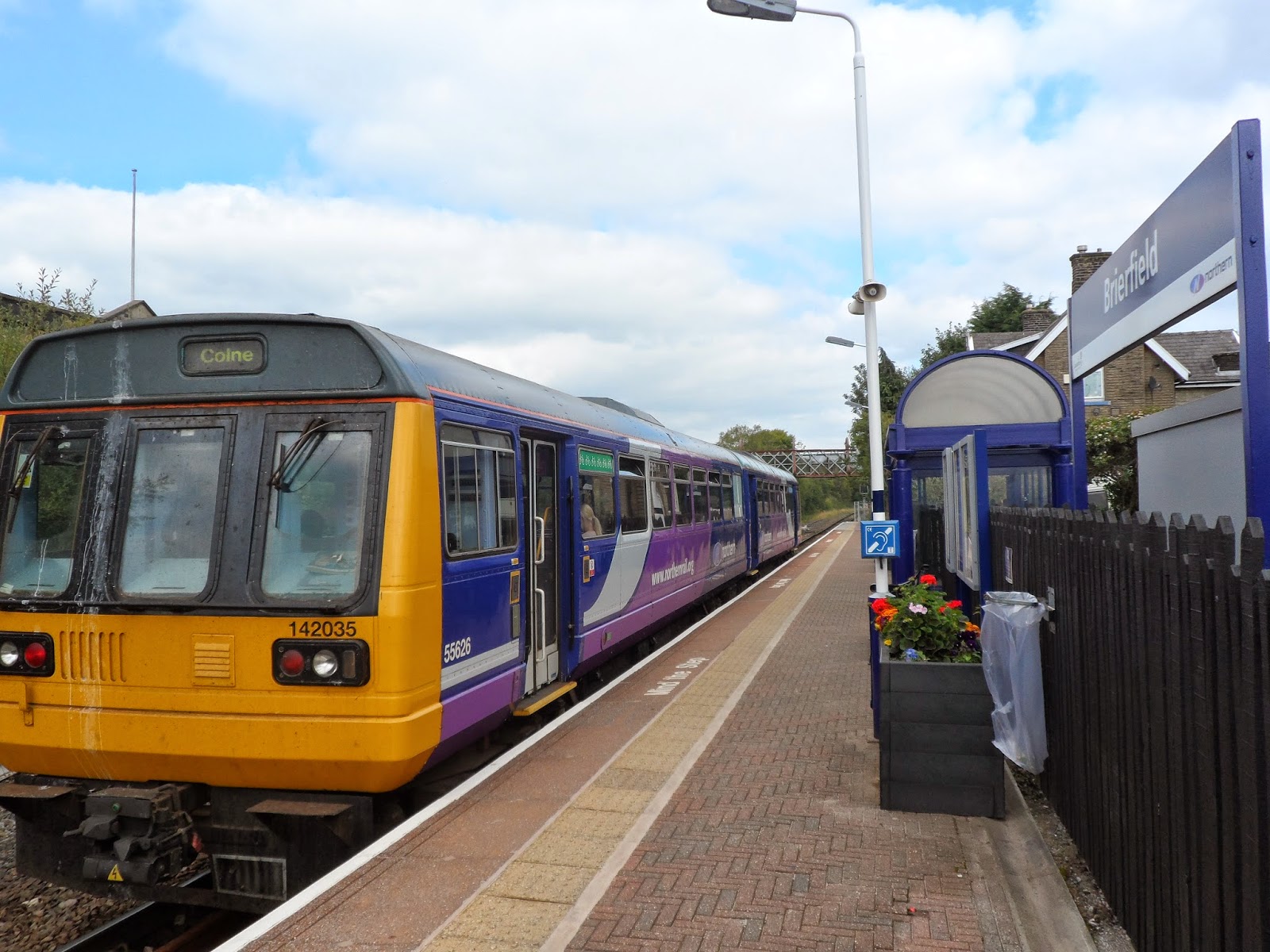 I got off the train alongside a young girl in a hijab.  Her feet had barely touched the platform before she'd whipped out her mobile phone and began yammering away on it in a thick Lancashire accent.  I couldn't make out the words - she was talking far too fast - but from her shocked-slash-delighted faces I can only imagine she was sharing scandal of the highest level. 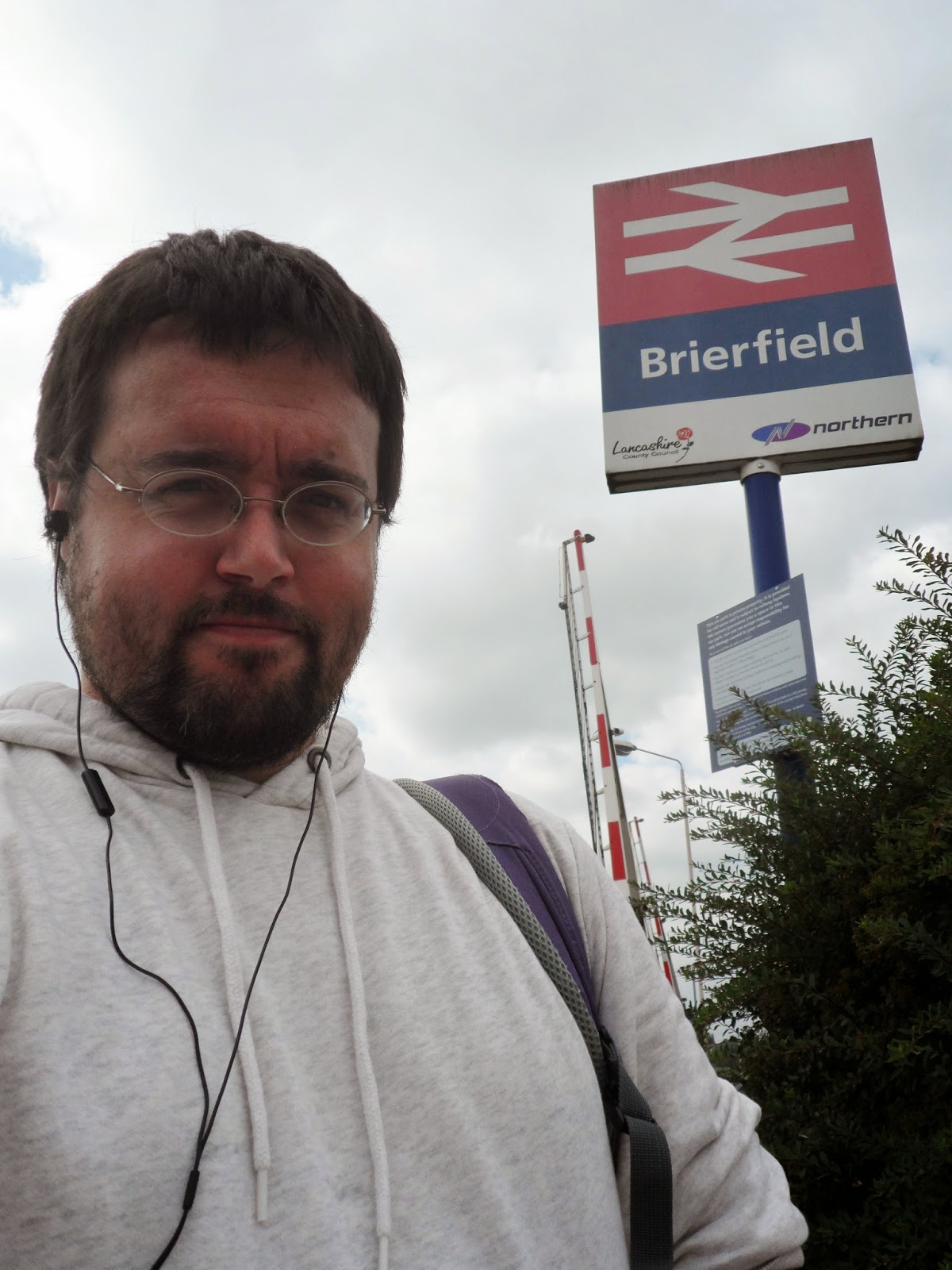 Trudging up Railway Street and into the centre of Brierfield, I found a standard small town that had been touched with the exotic.  There were the regular sights - a library, a civic hall, a Co-op - but in between them were halal butchers, grocers selling mysterious vegetables, The Taste of Punjab takeaway which promised "original Pakistani food cooked in front of your eyes", making it sound like a magic trick. 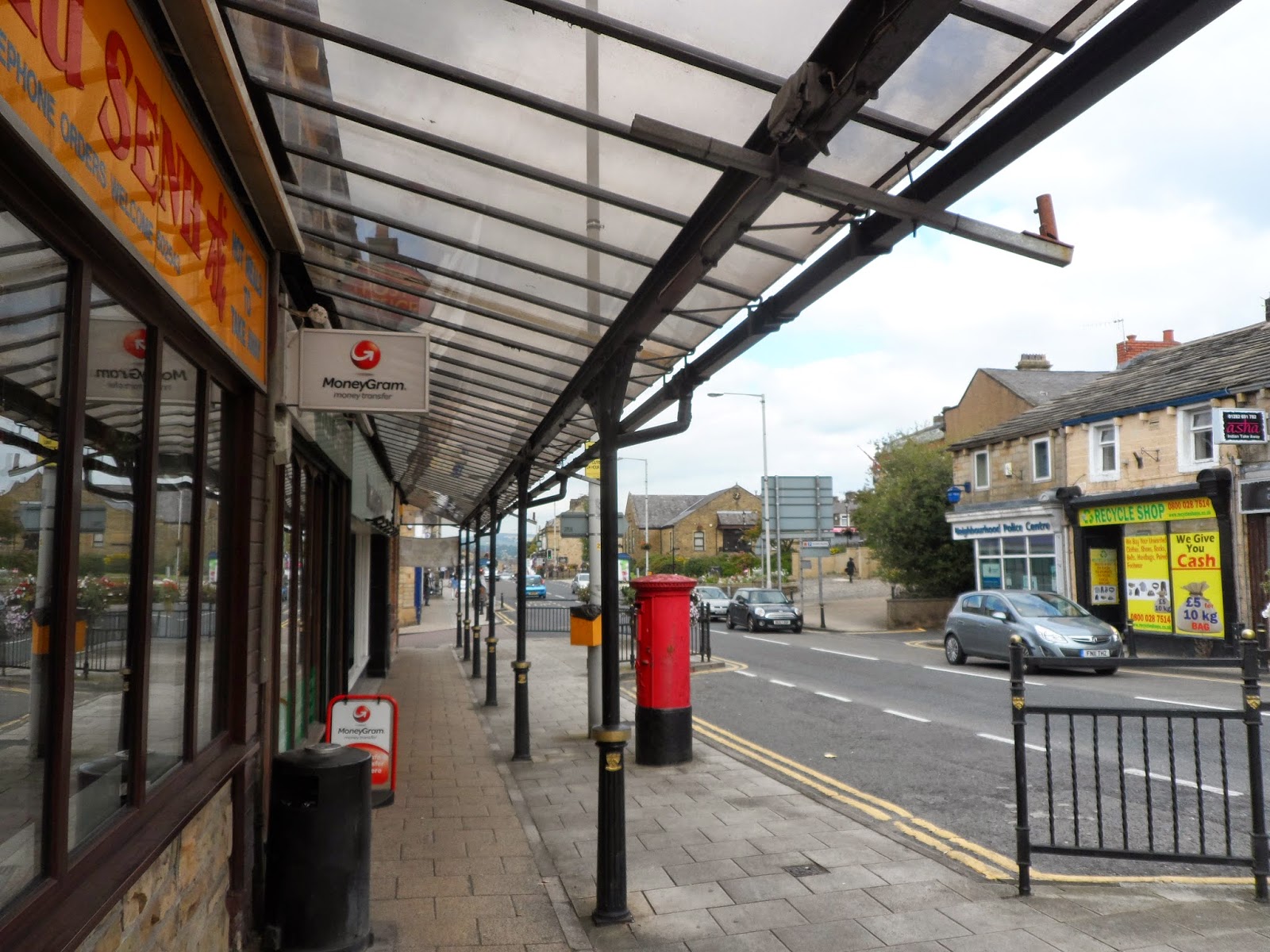 It was the way the subcontinent had seeped into quite an ordinary place that pleased me most.  It wasn't a tight inner city, it was just a little place on the edge of Burnley, and it had acquired an infusion of spice.  I liked seeing little old white grandmothers next to enormous women in saris on the pavement.  Growing up in Luton, I was used to different coloured faces in the crowd; coming to Merseyside all those years ago was a shock.  It was so white.  This was like being back home. 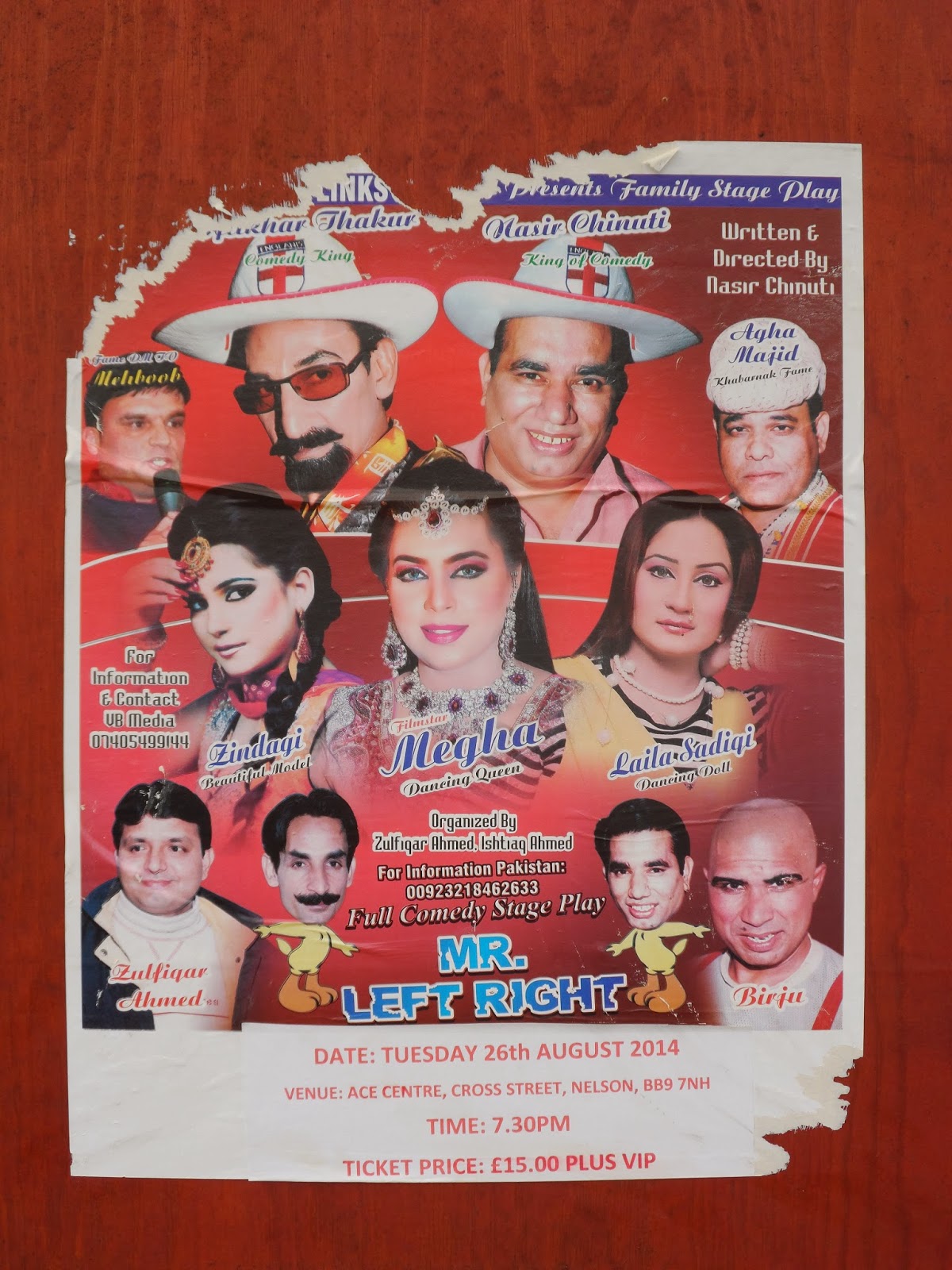 Mr Left Right, at the bottom of that poster, looks particularly amazing; it seems to involve a man dressed as Napoleon, Borat with the body of Tweetie-Pie and The Hood from Thunderbirds in some kind of comedy extravaganza.  Who wouldn't want to see that?

As I left the town, the sights became more traditional.  A pub had been turned into a fireplace showroom.  A gasometer peeked over the rooftops.  A chimney poked out of the green trees of the Calder Valley. 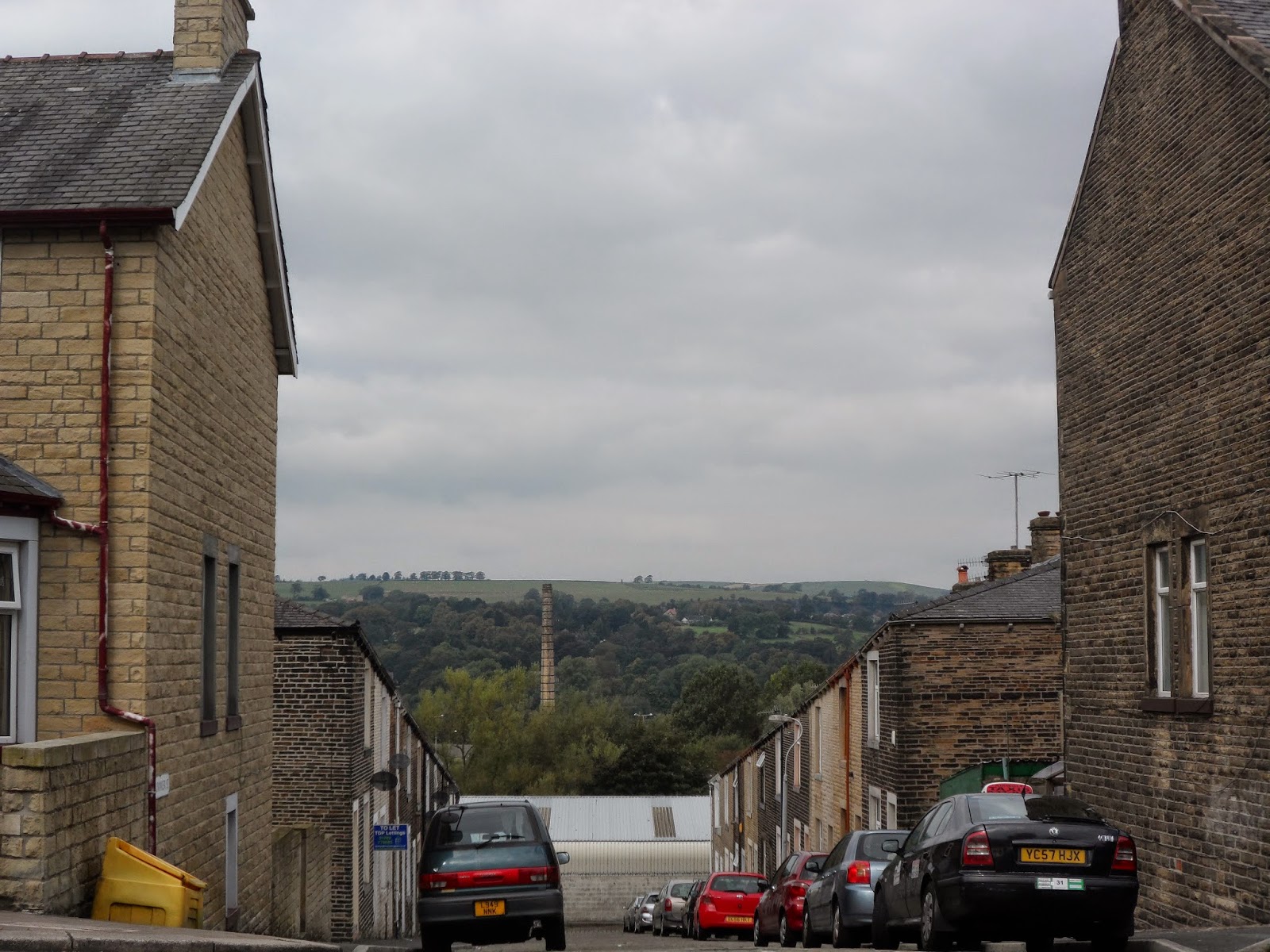 Brierfield merged into Nelson.  A church spire appeared on the horizon.  There were still occasional hints of the Asian influence - a sign proclaiming the restoration of a listed building was being paid for by "Madina Masjid Nelson", a fried chicken restaurant noting that the food was halal - but it was more under the radar.  By the time I'd reached the town centre, with a Lidl and a multi-storey car park, I was back to being anywhere in England. 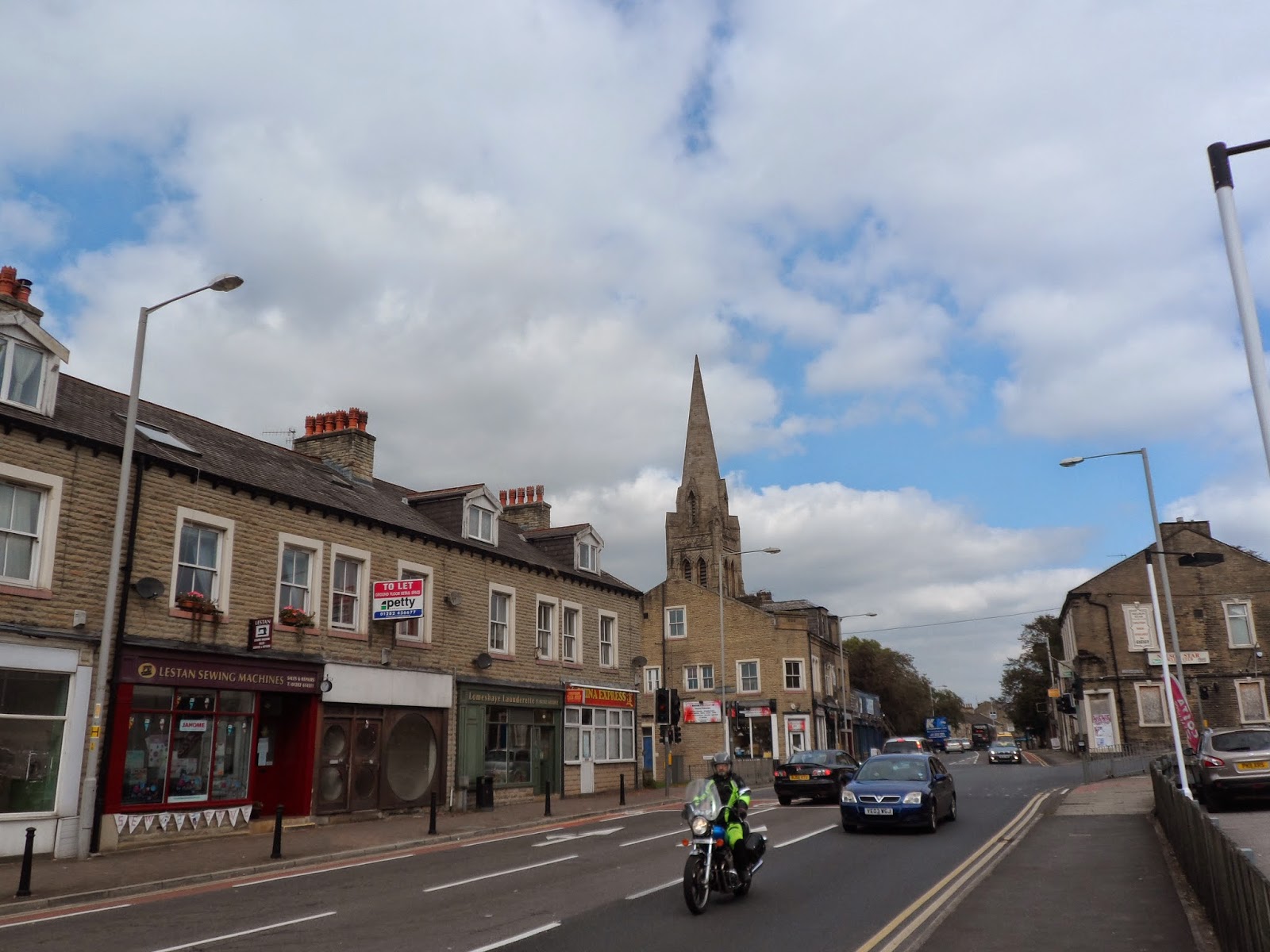 I turned into a side street by the Station Hotel.  It was an attractive yellow stone building, now far too grand for its new role as a town centre boozer.  I wondered what happened to all the guest rooms upstairs; if they were cobwebbed and abandoned, or simply used as somewhere to store the cheese and onion crisps. 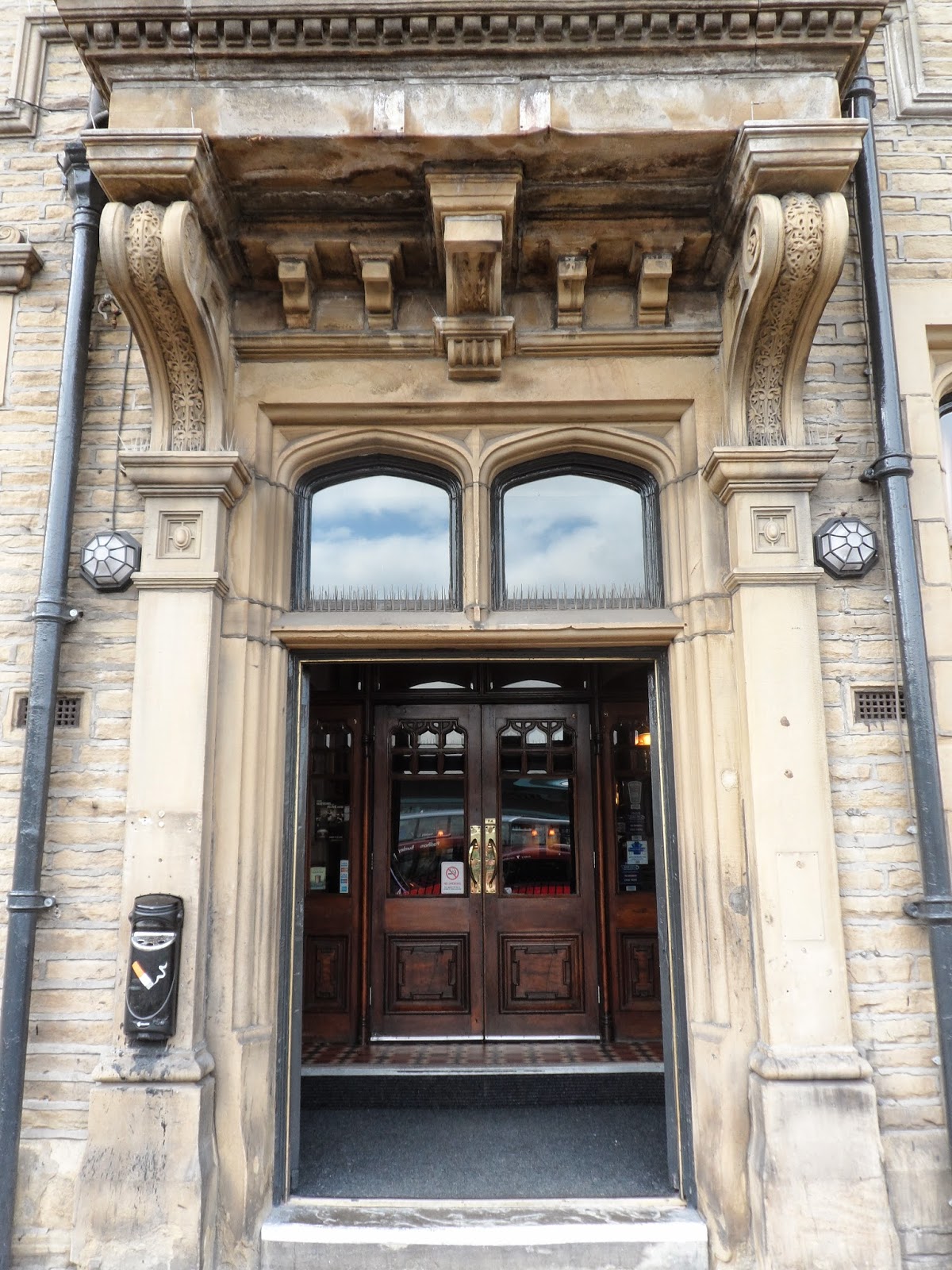 Nelson station had been swallowed up by a massive green-glassed bus terminus.  There was, theoretically, a railway station in there somewhere, but it was very much a secondary concern.  It was bright and airy, but you really had to squint to find evidence of the railways. 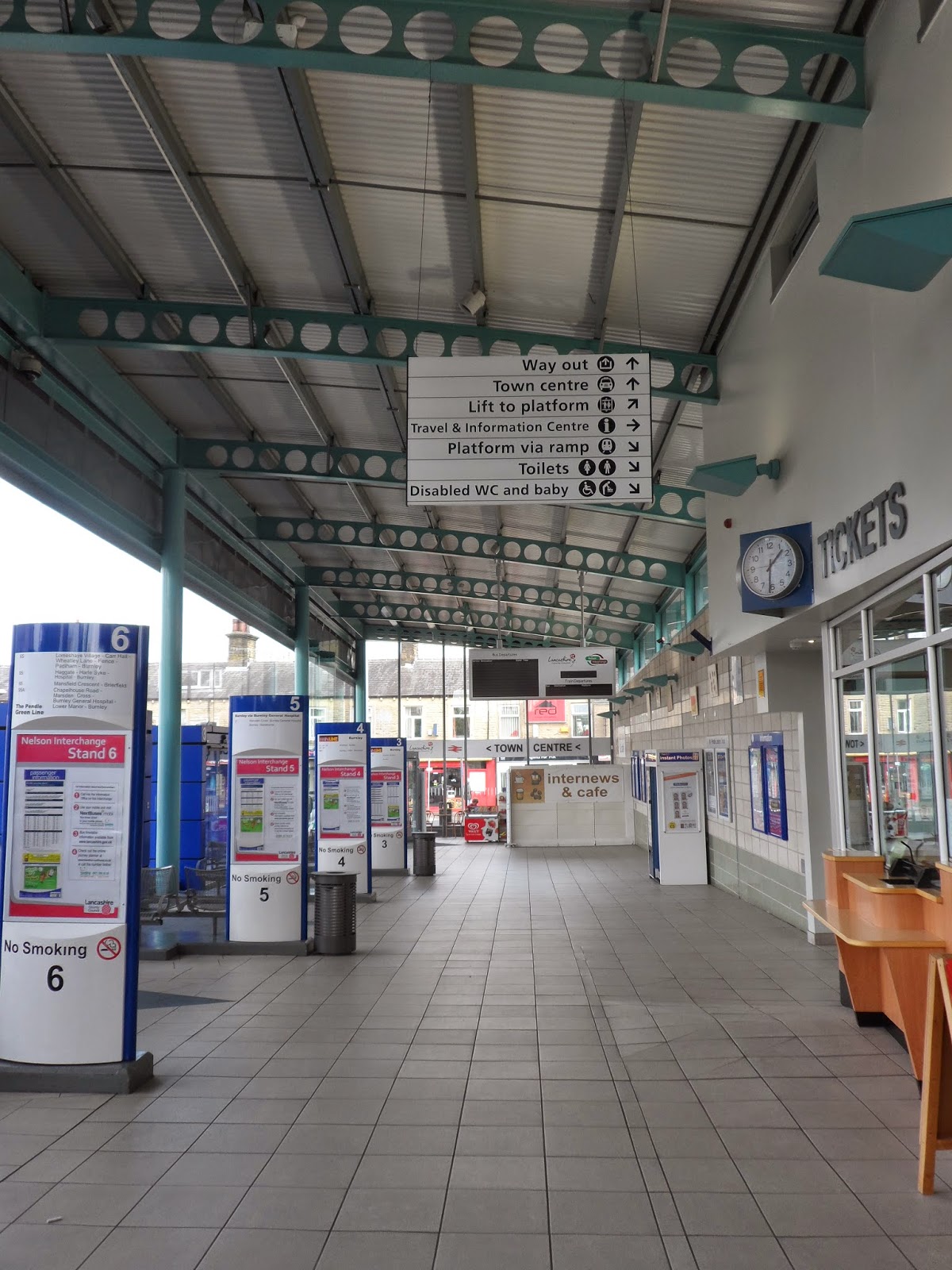 The trains were so unimportant that the station continued to carry Network NorthWest branding, a short-lived British Rail venture that was killed off twenty years ago. 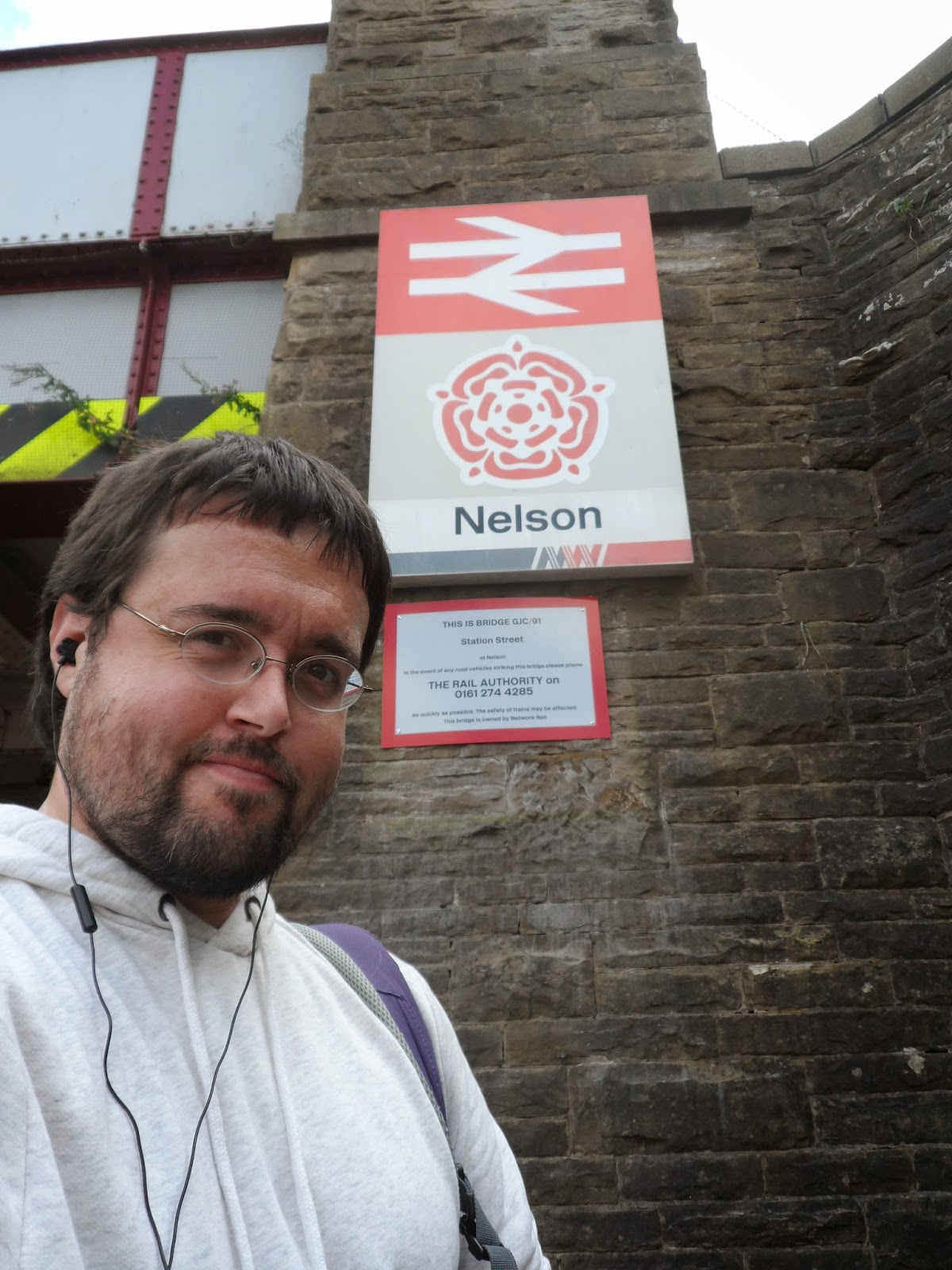 Incidentally, the whole time I was trying to take the sign picture, a lady in the bus station cafe was staring straight at me.  It was very disconcerting.

Nelson's hidden railway station is even sadder when you get up to platform level, because there it's remarkably pretty. 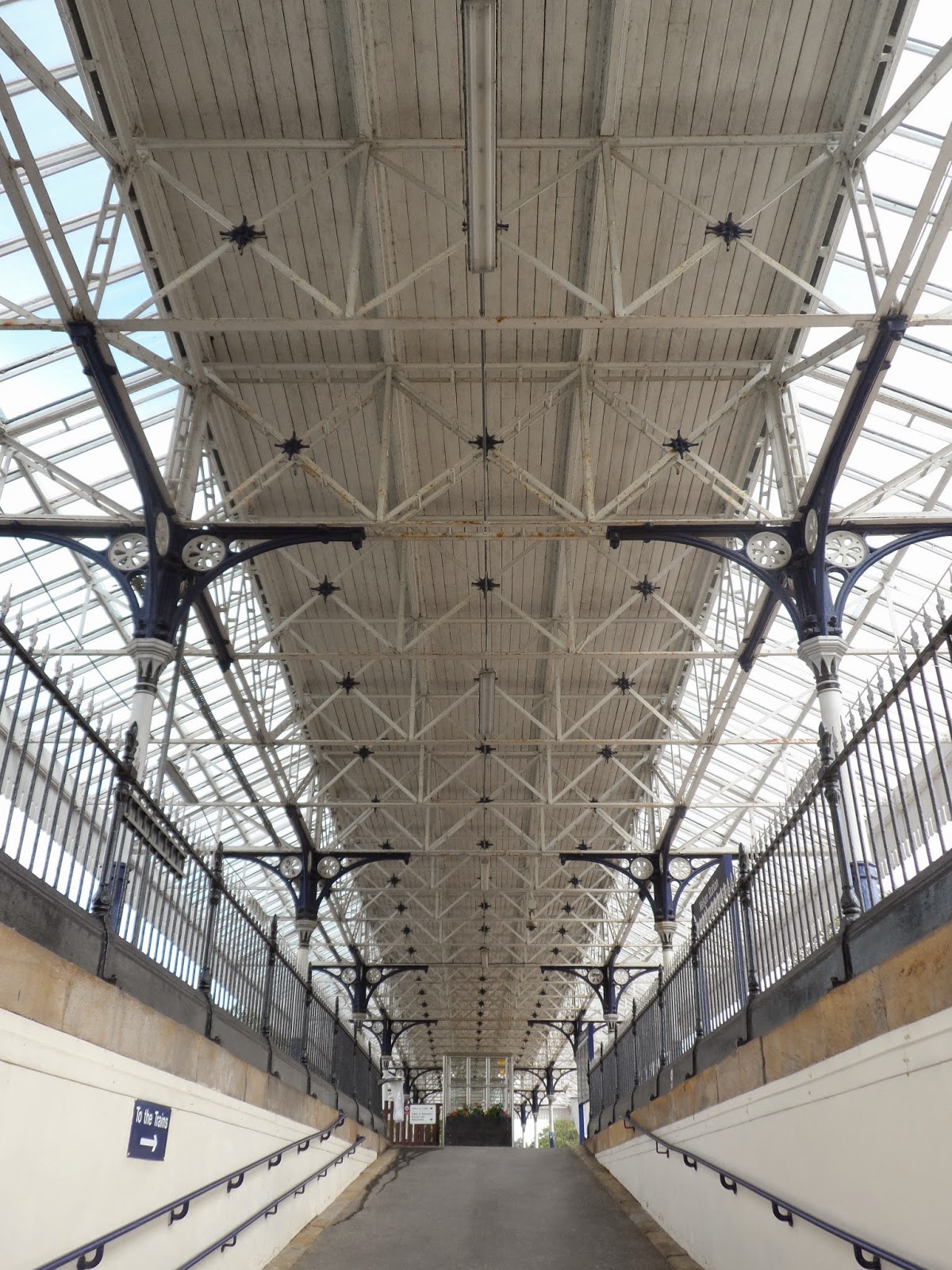 Somehow, despite its train service being negligible and its station buildings having vanished, Nelson's managed to cling onto its impressive Victorian roof.  A long stretch of attractive ironwork covers the platform, making it feel like an important and interesting place. 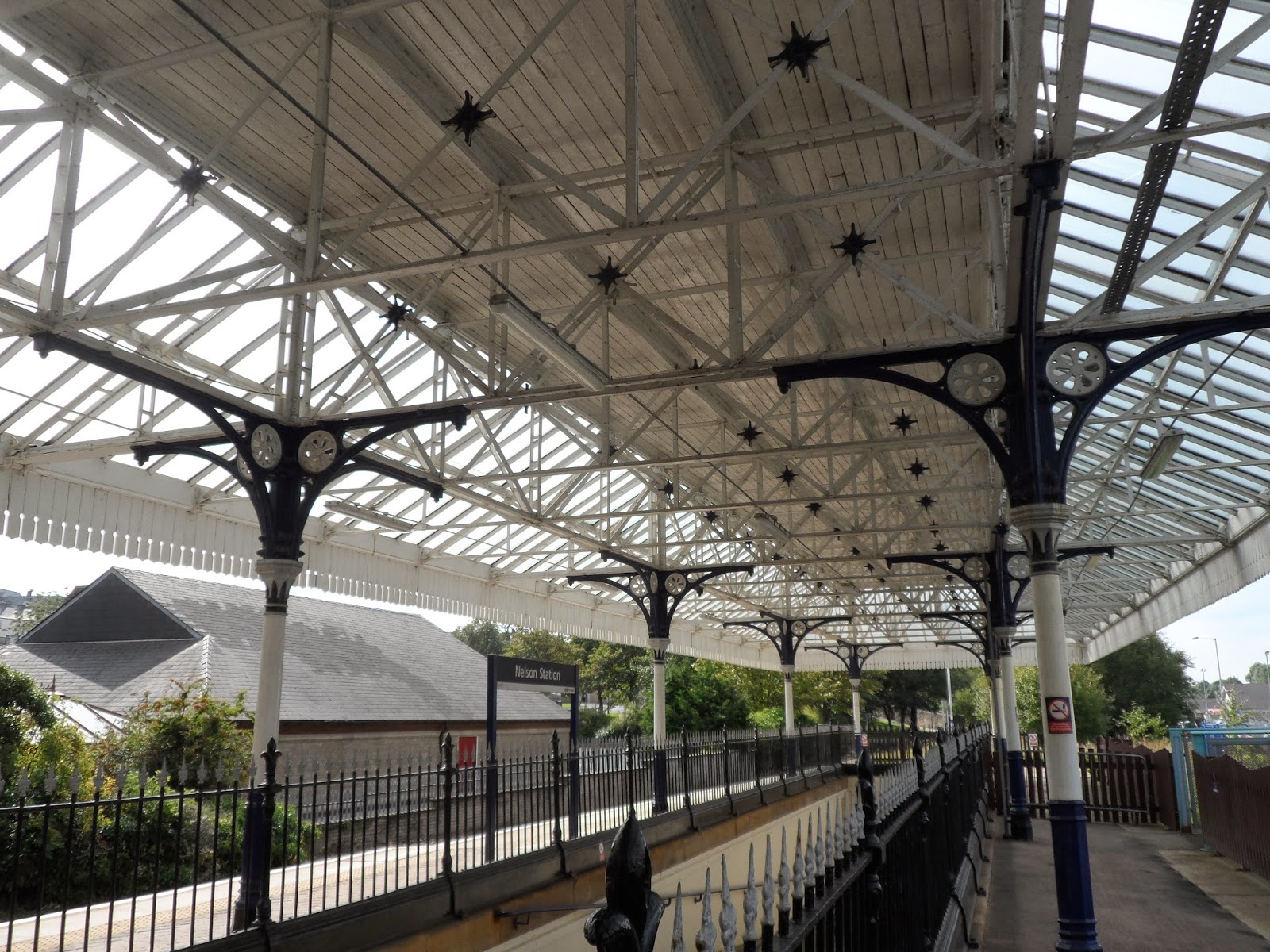 The second platform has been filled in, of course, but it was easy to imagine this used to be a busy place for crinolined 19th century ladies to wait for their train into town.  I took a seat and ate my sandwiches, watching a pair of magpies strut about the place.  It was good to see that there was some attention being paid to the line. 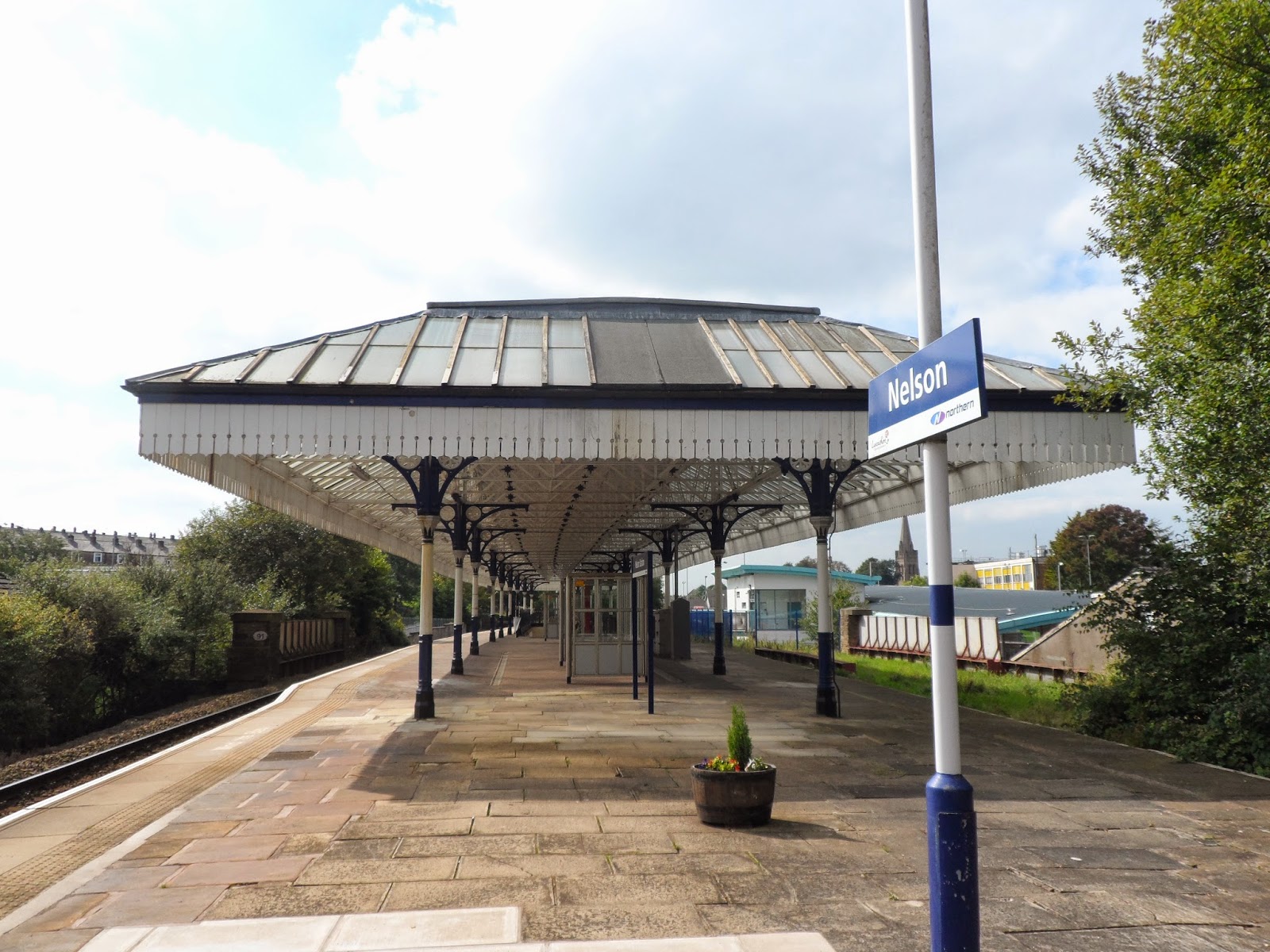 It was certainly better than the end of the line, Colne.  That's just a single platform with some planters and a shelter; not quite in the same league. 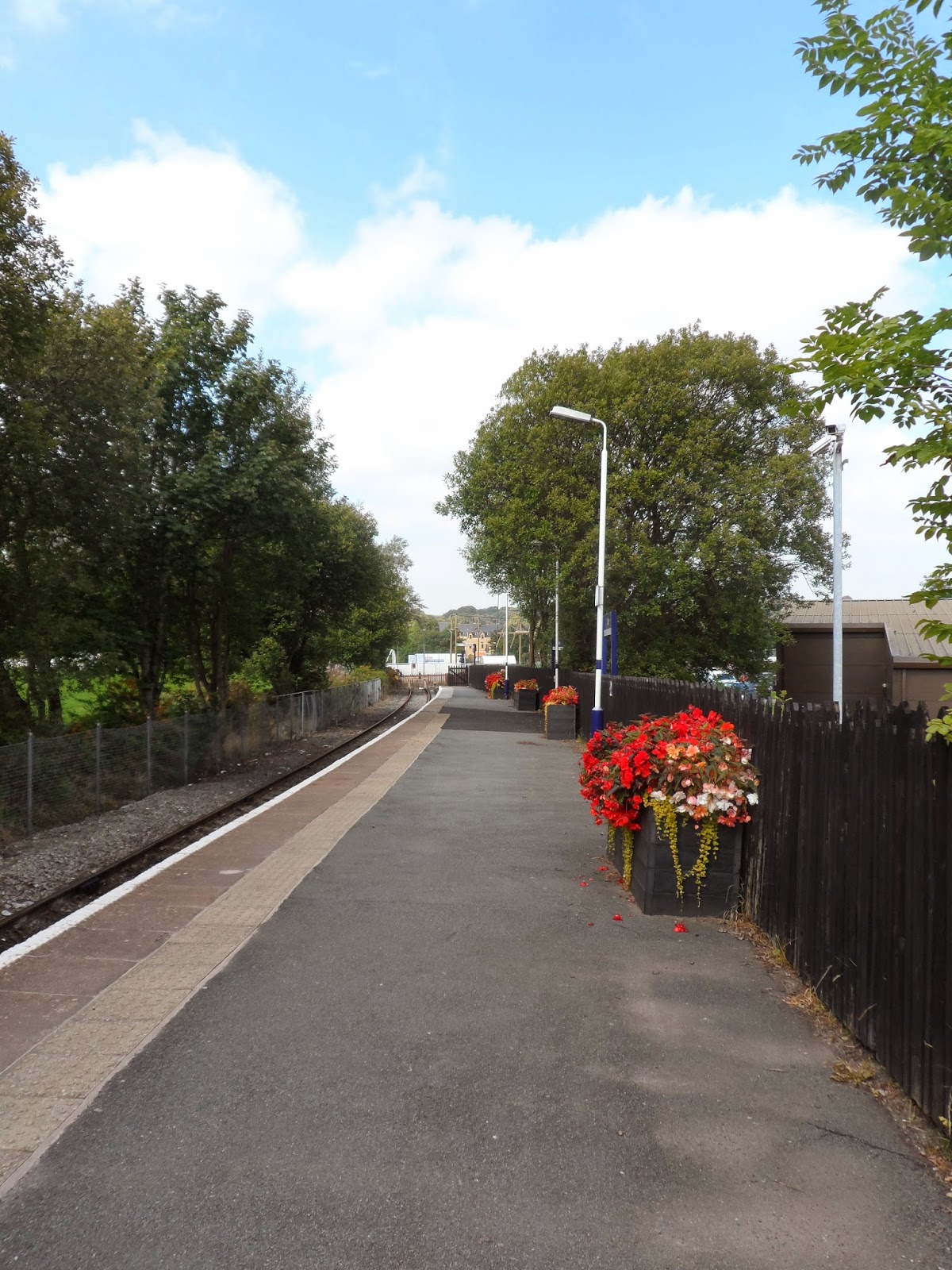 Of course, it never used to be the terminus.  The line once continued onwards to Skipton, and there are tentative plans to restore it; it would provide another cross-Pennine connection, towards Leeds, and the track bed is pretty much all there.  The problem is money, as usual. It certainly felt disappointing to come right to the end of the line and find that was it.  The exit, through a flower bed to a small car park, could have belonged to any suburban station anywhere.  I wanted a bit more pomp. 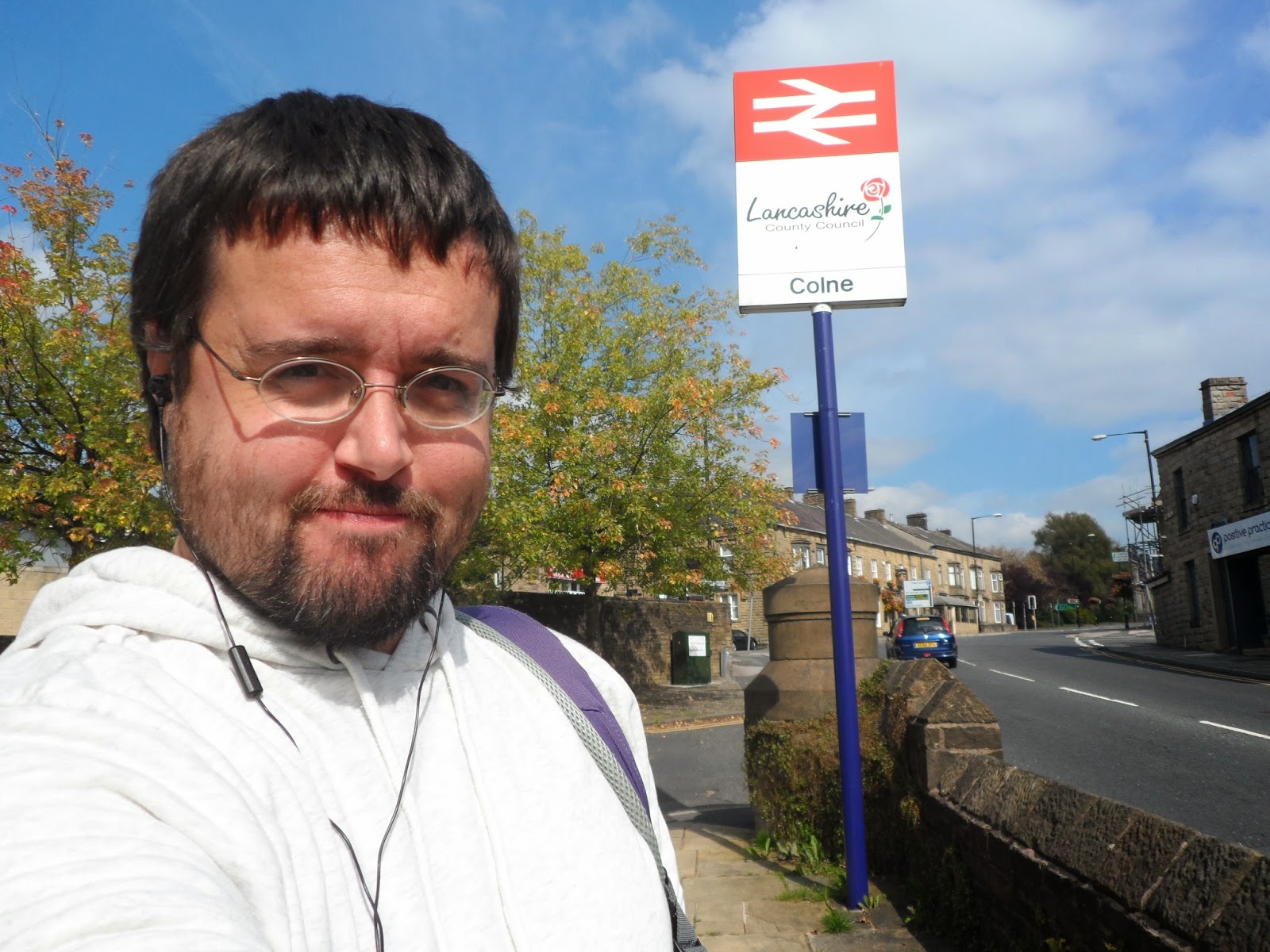 I could have just got the train straight back down the line - it's what Ian did when he visited - but I decided to have a little wander around the town and get the next one.  I'm glad I did.  Colne was a charming little town, with a busy main street dotted with cafes and upscale shops.  Mature trees shaded me from the September sun. 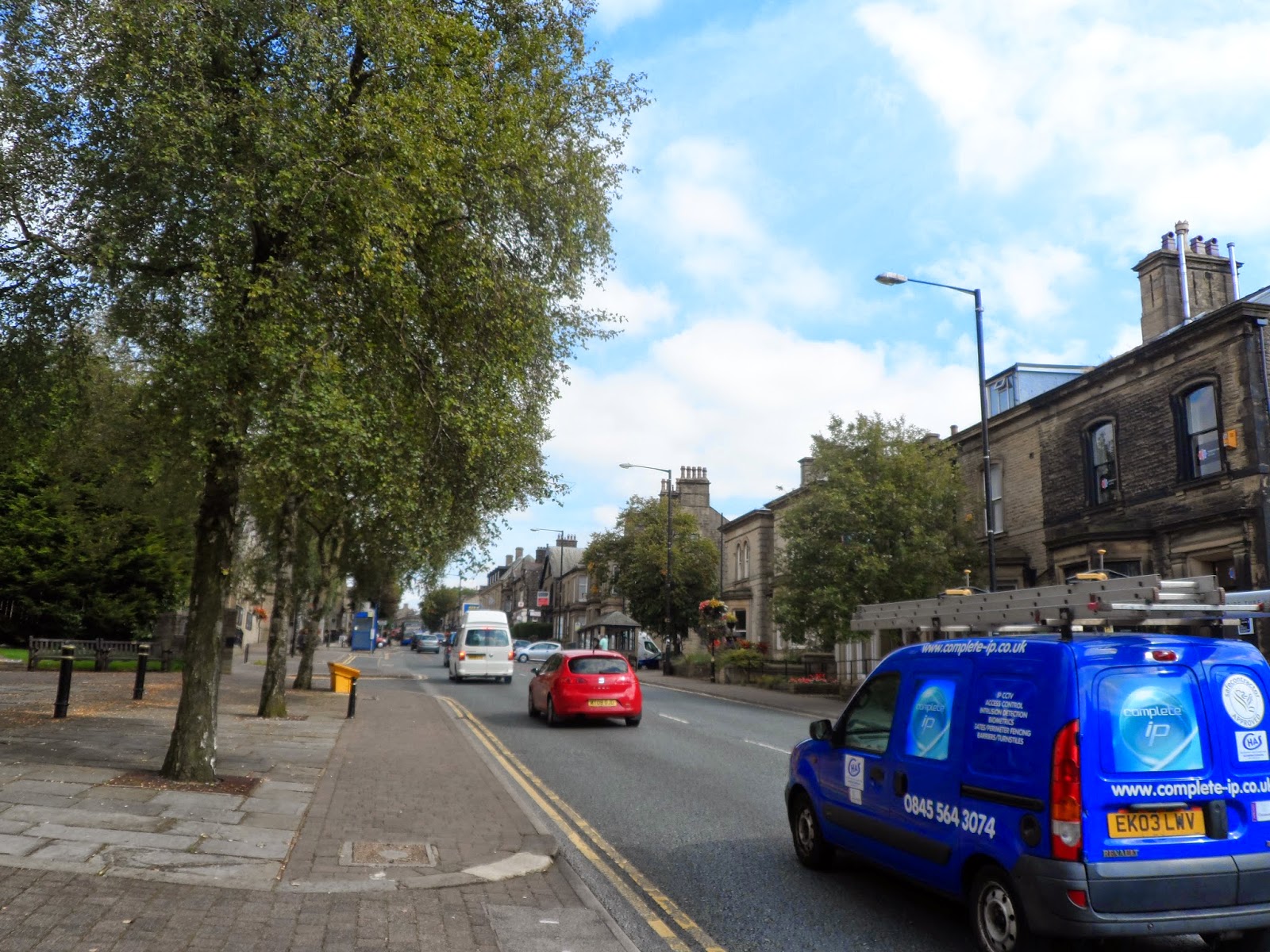 Colne is in the borough of Pendle, famous for its witch trials and now a source of tourism for the district.  I'd already seen a bus branded as "The Witch Way", and there was a cafe across the street called Pendle SandWitch.  I'm not sure how I feel about this - haven't we agreed, as a society, that witch trials were a pretty horrible part of our history?  That they were fuelled by fear, superstition, misogyny, and a whole lot of other nasty emotions?  As such, should we be incorporating the execution of a dozen women into our attempts to flog a salad bap?  It seemed a bit odd.  I suppose after five hundred years it just becomes a story. 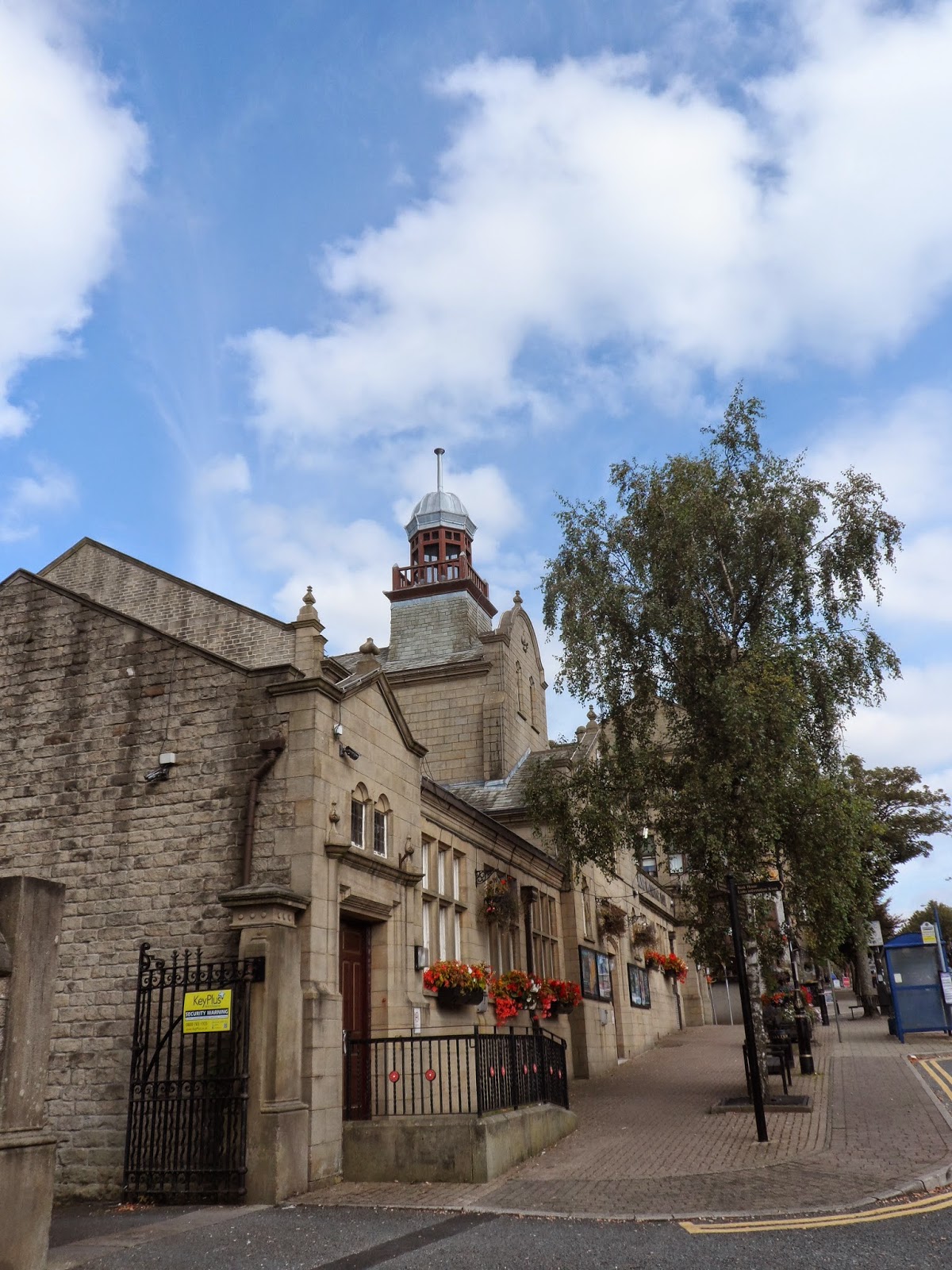 There was an impressive civic hall, and a series of grand retail buildings - clearly Colne had been rich during the Industrial Revolution.  An old department store had been subdivided into smaller units, but the gold writing above the windows still proclaimed FURNISHING - CONFECTIONERY - GROCERY.  The shops that now occupied it were well-off designers and hair salons.  As I crested the hill I reached the real centre of the town, which wasn't as pretty; a 1960s Market Hall squatted in amongst the sandy stone work, offensively ugly.  There was a job centre here, and a Fultons Foods, while a gang of taxi drivers chatted beside their vehicles. 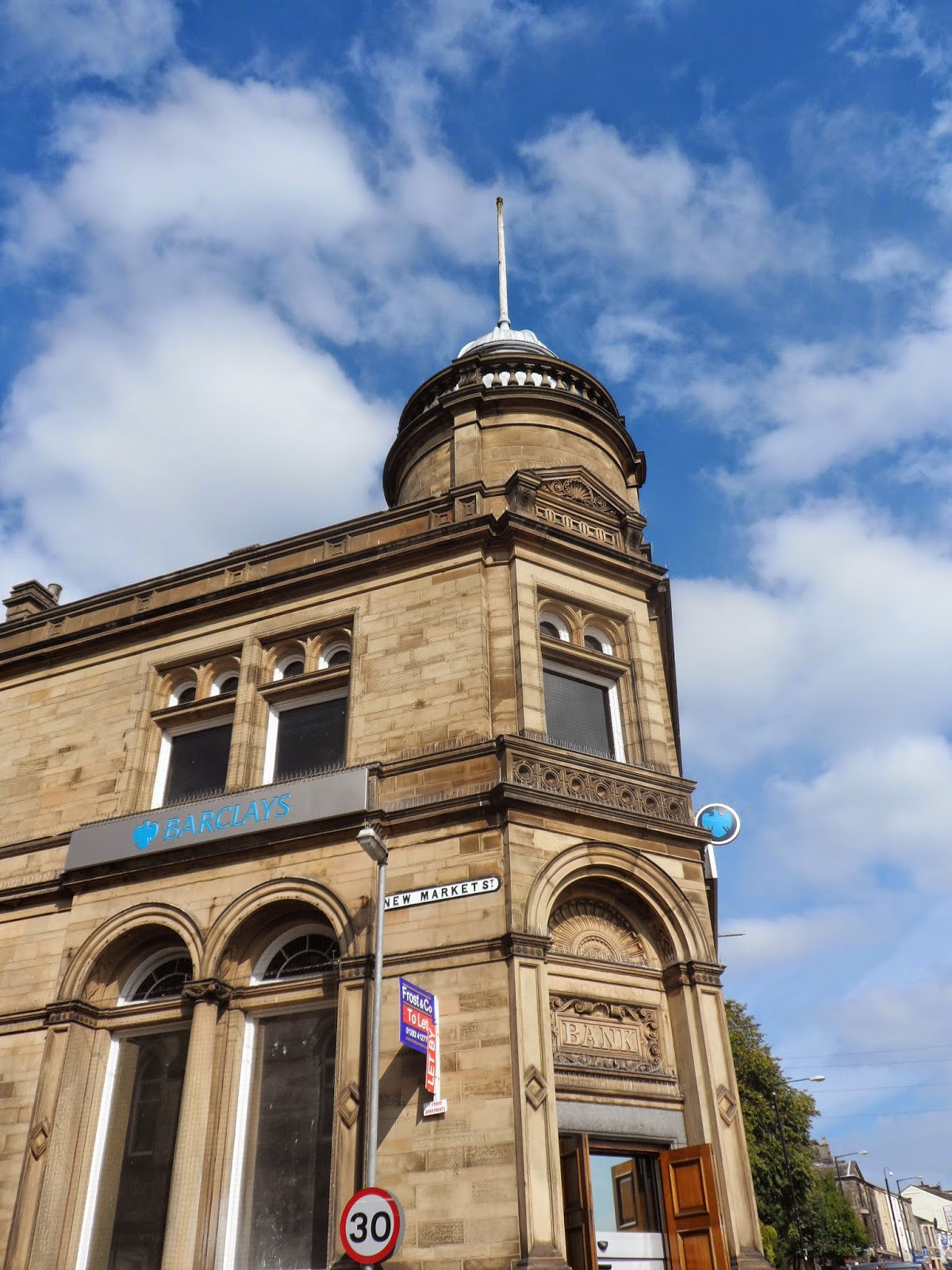 I was intrigued by a biscuit factory down a side street.  I mean, firstly it was a biscuit factory, which is obviously marvellous, but I was particularly taken by the 1960s sign work.  It was wonderfully evocative, and I could picture a staff made up of fearsome ladies in coveralls shouting intrigue over the noise of the machines.  Sadly, the factory seemed to be long dead. 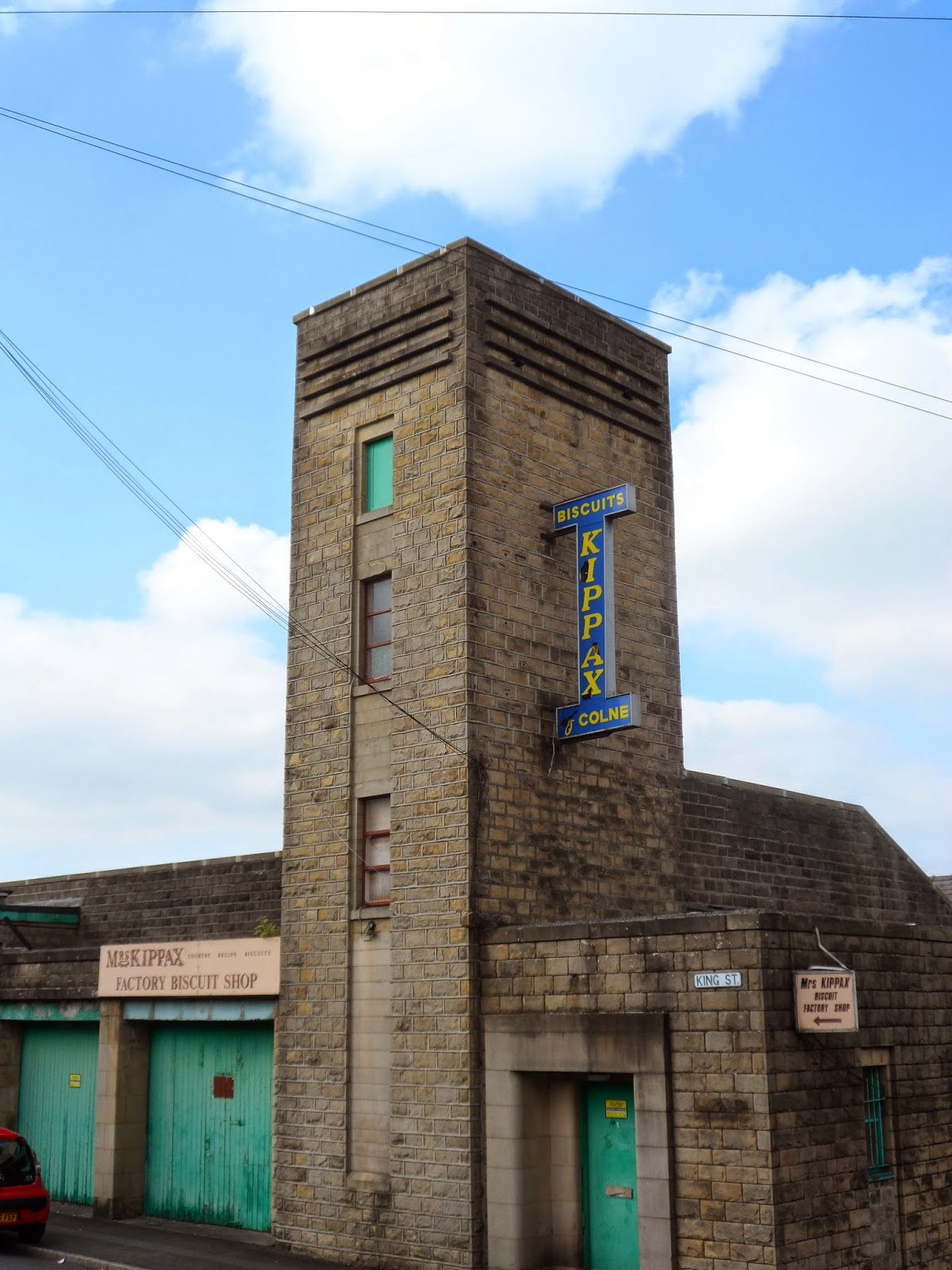 I turned and walked back down towards the station.  A display of photos from an amateur production of 'Allo, 'Allo! caught my eye, mainly because Madam Edith had baguettes in her hair instead of rollers.  I'm not sure why, other than because she is a HILARIOUS FRENCH PERSON. 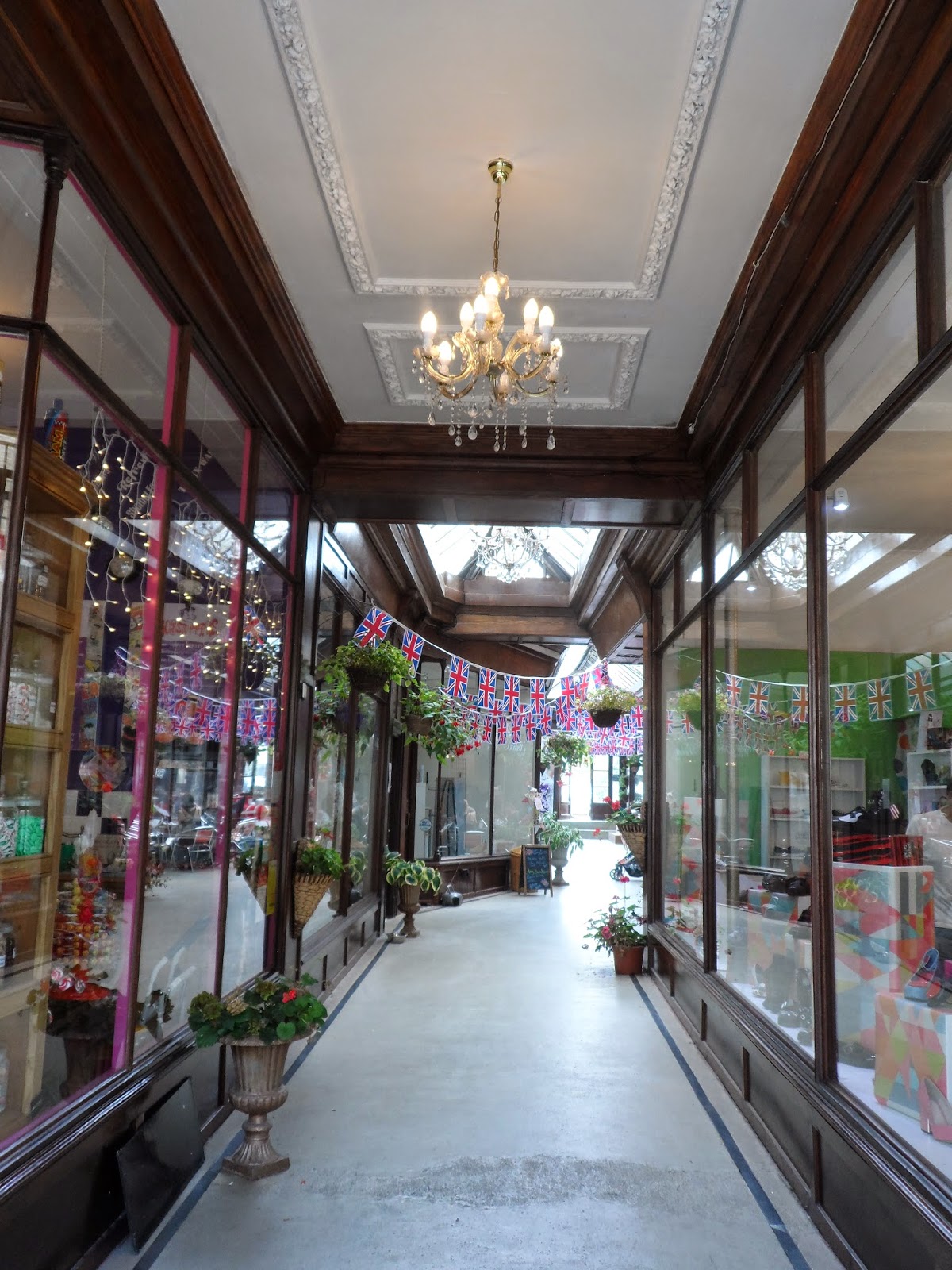 I was willing to be captivated by Colne, until my return to the station convinced me that the local residents are all scumbags.  I know it's deeply rude to tar an entire town because of the actions of one individual, but look at this: 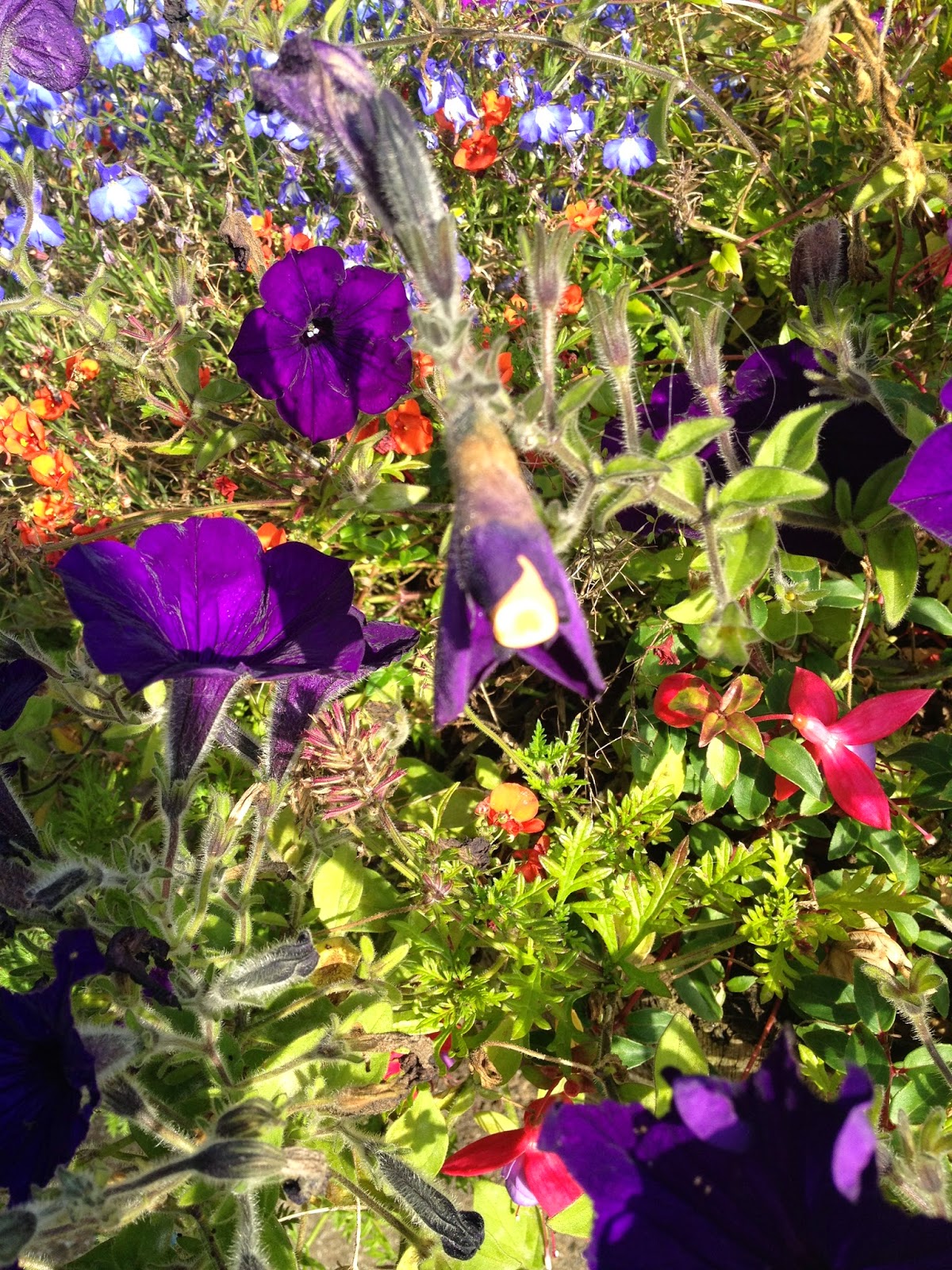 Some evil person had rammed their fag end into a petunia.  Imagine the effort they had to go to.  The person had to push their cigarette butt in hard enough for it to lodge itself in the flower, but not so hard that it fell to pieces.  They had to put some proper thought into it.  That person is clearly a psychopath, and I was glad to leave their town behind.

I had one more place to visit.  Burnley has three stations: Barracks and Central, on the Colne line and, to the south of the town centre, Manchester Road on the Leeds line.  I got off at Central and walked through the town centre.  I passed through a quarter which seemed to be devoted to nothing except getting people drunk; it was full of shiny pub/clubs with names like Vogue and Lava and Ignite.  I bet on a Sunday morning the Council has to assign an entire team of street cleaners to hose down the dried vomit from the pavements. 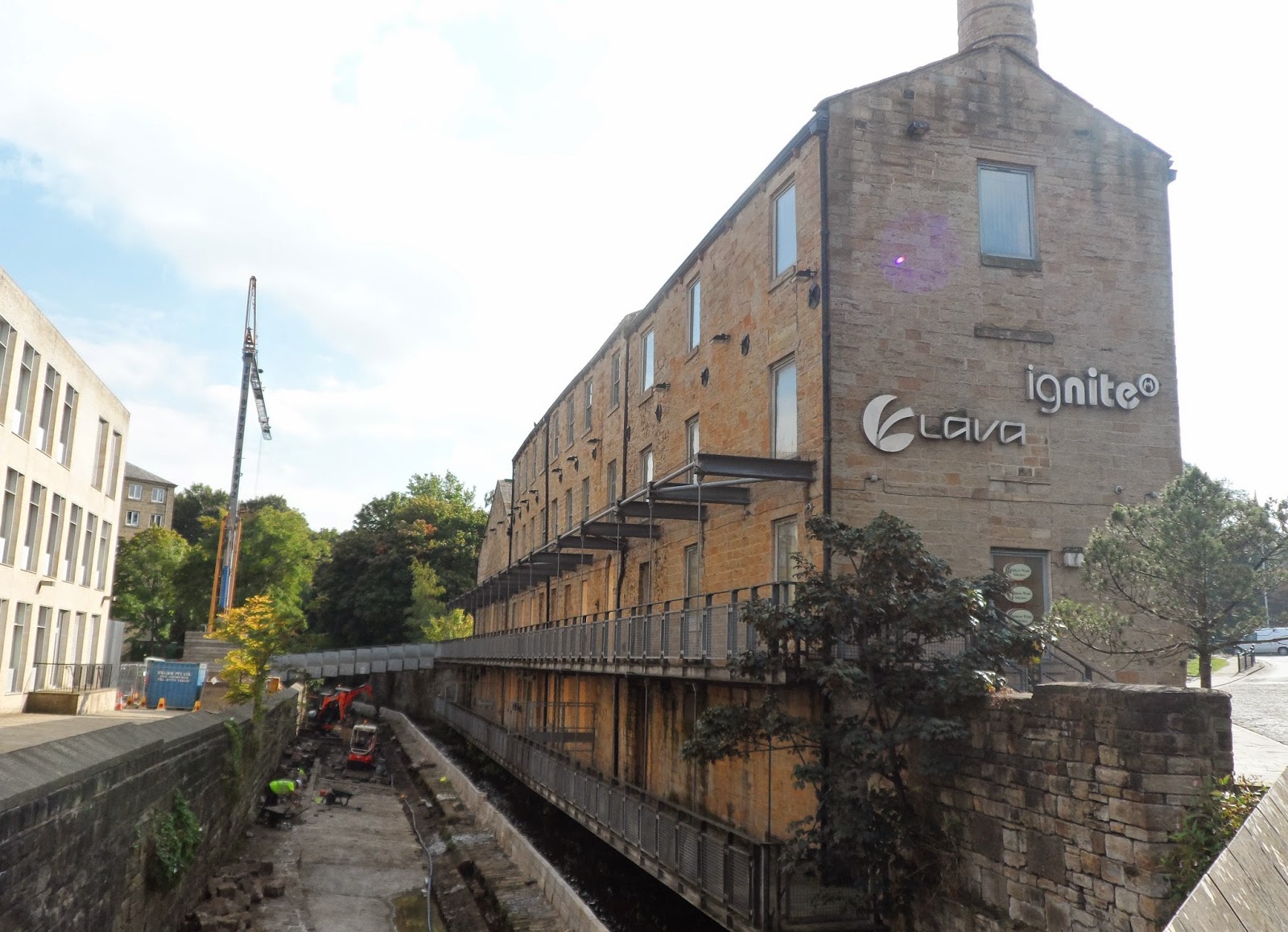 Despite its prosaic name, Manchester Road is actually Burnley's main station, and it was in the middle of getting a makeover.  The building had been rebuilt with an impressive blue fin to attract attention, and there was a glass walled ticket office and waiting area.  It was still fenced off, ready to be completed. 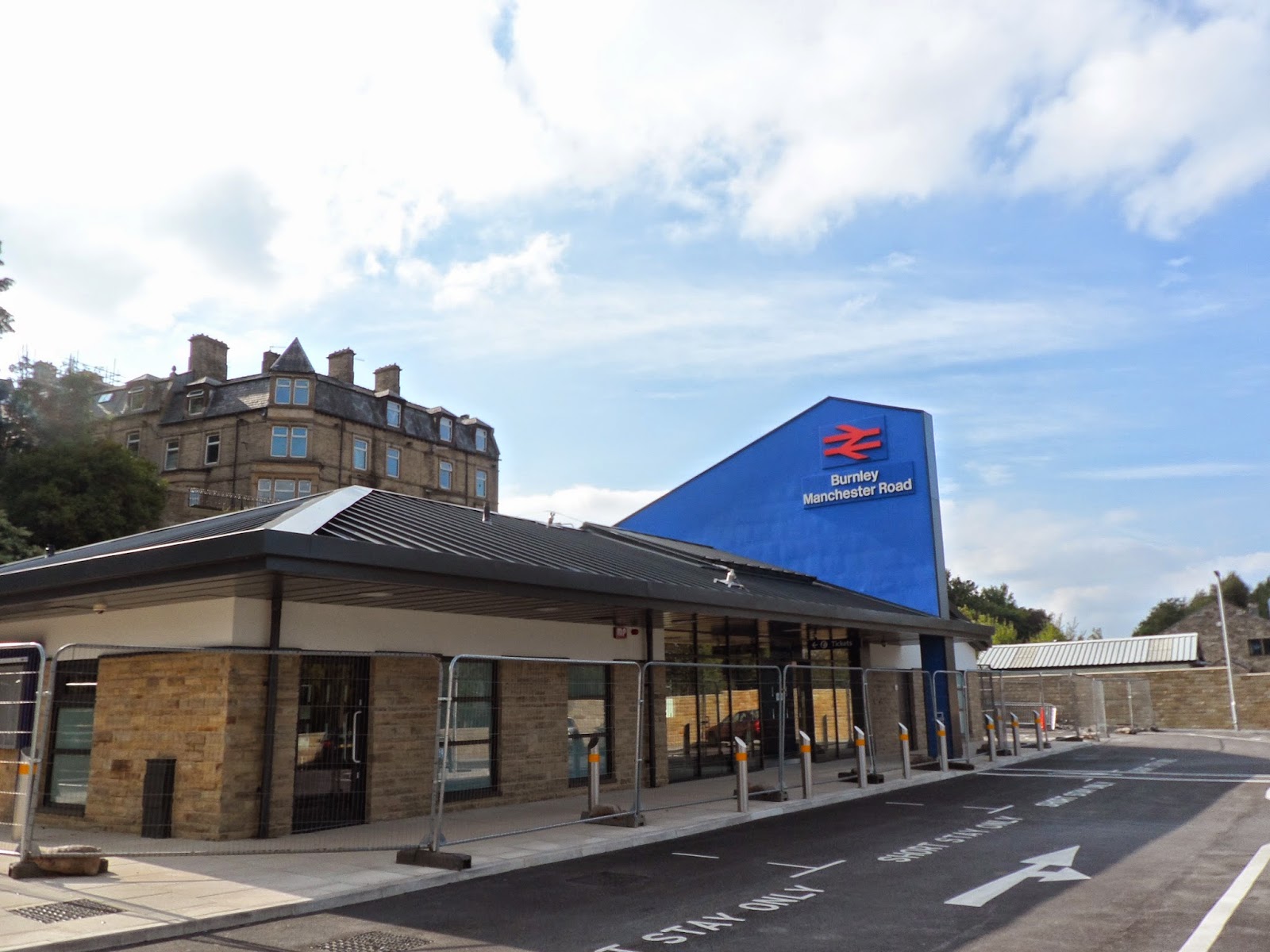 Sadly, my platform was on the opposite side, unadorned and unmodernised.  I was pleased to see there was another railway station architecture fan poking around as well, though his photographic equipment was far more impressive than mine. 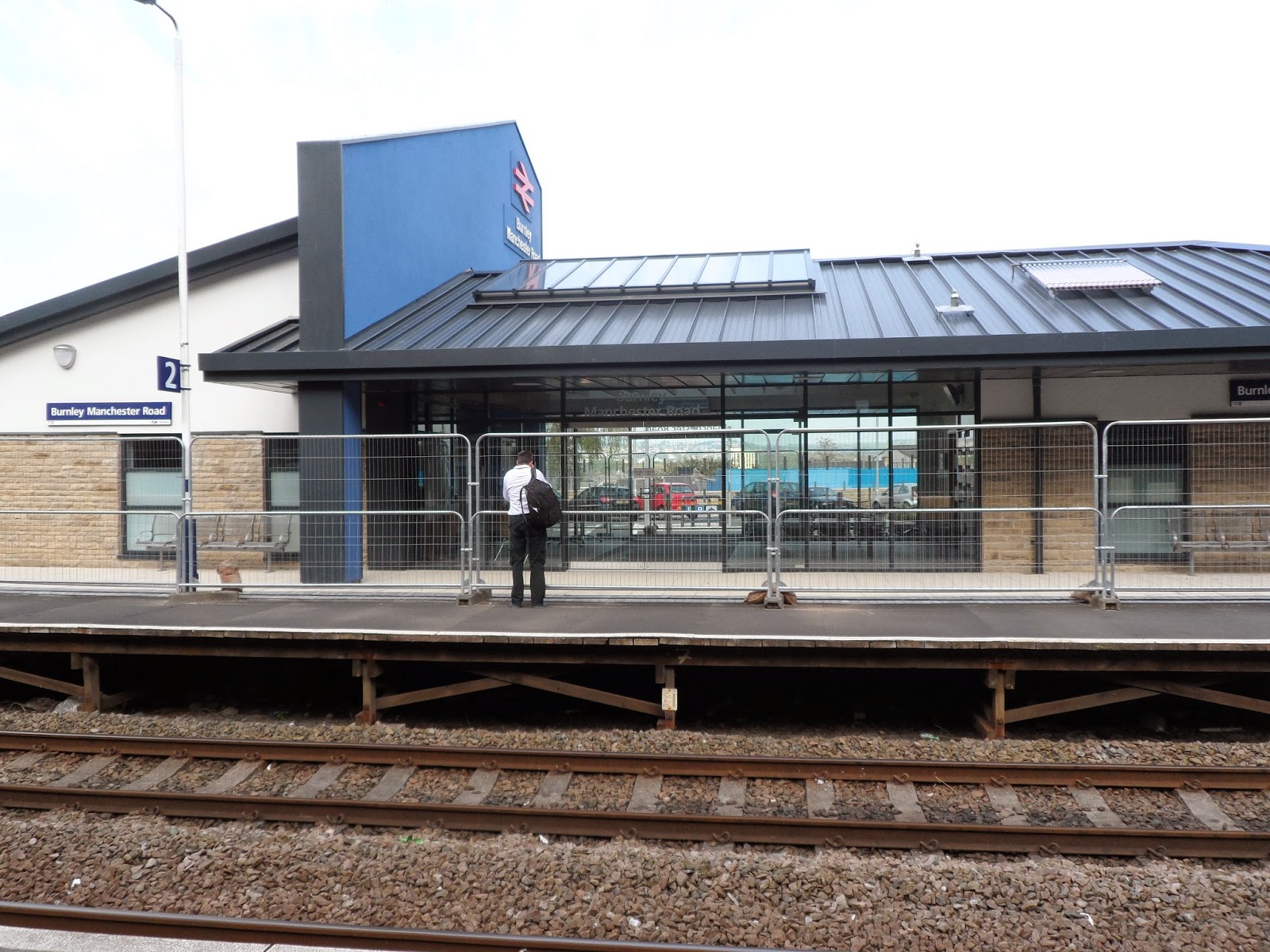 I'd crossed off another line, but I wasn't excited by it.  I was glad it was out the way.  I decided I'd have to go somewhere more exciting for my next trip out.  I can't afford to get bored of station collecting. 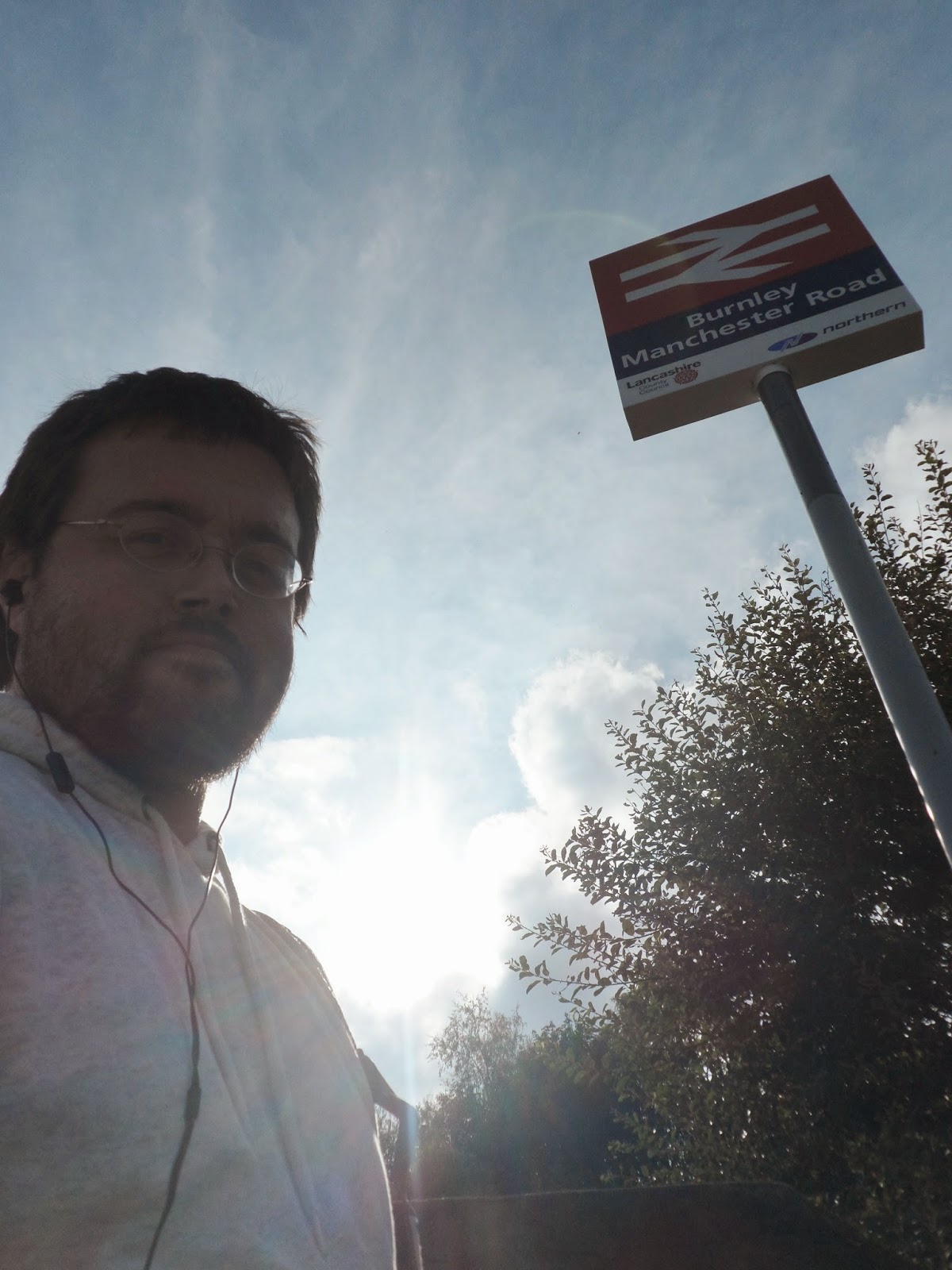