The element that creates this beautiful blue marble we all live on.  A precious resource we all treasure.  The thing Dominic Greene was willing to initiate a revolution for in Quantum of Solace.  Valuable, plentiful, beautiful.

You know what it's not?  Worth £1.95.  ONE HUNDRED AND NINETY FIVE BRITISH PENNIES FOR A BOTTLE OF WATER.

I stared at the bottle of Volvic in Preston station's Whistle Stop shop with a mixture of awe and disgust.  Awe that they had the gall to charge that much for a bottle of still water - that's right; it wasn't even sparkling.  They'd not even gone to the effort of carbonating the bugger, just stuck a plastic bottle in a well, slapped a label on it and sent it out.  It wasn't one of those fancy, pretentious brands like San Pellegrino, or a bottle of Smart Water that would do whatever Smart Water does (increase your IQ?  Change a tyre for you?).  Mainly I felt disgust at the shameless gouging, the way the shop was taking advantage of the thousands of trapped individuals who passed through the station and just wanted a drink between trains.  They were in an unfamiliar city, they didn't know if there would be somewhere else if they ventured outside the station building, they didn't want to miss their connection, they just wanted to get rid of the dryness in their mouth.  They'd have to hand over the £1.95, and it'd be finished by Crewe.

I turned around with what I hoped was an imperious sneer but was probably more of a Kenneth Williams-esque flounce.  Pay that kind of money for water?  How DARE you, sir. 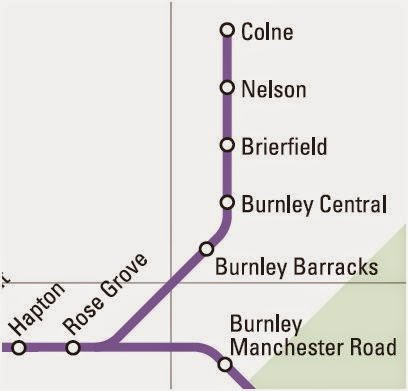 I was still fizzing when I got on board my train.  My objective for the day was to finish the East Lancashire Line, which I started two years ago.  That might seem particularly tardy of me but it's all part of my plan.  I prefer to spread things about a bit.  Lines often feature similar geography, similar architecture; doing them all in one go could be a bit dull.  I try to mix them up a bit - the exception is lines like the Settle & Carlisle, which are difficult to get to and so I have to do them in one mass tart. 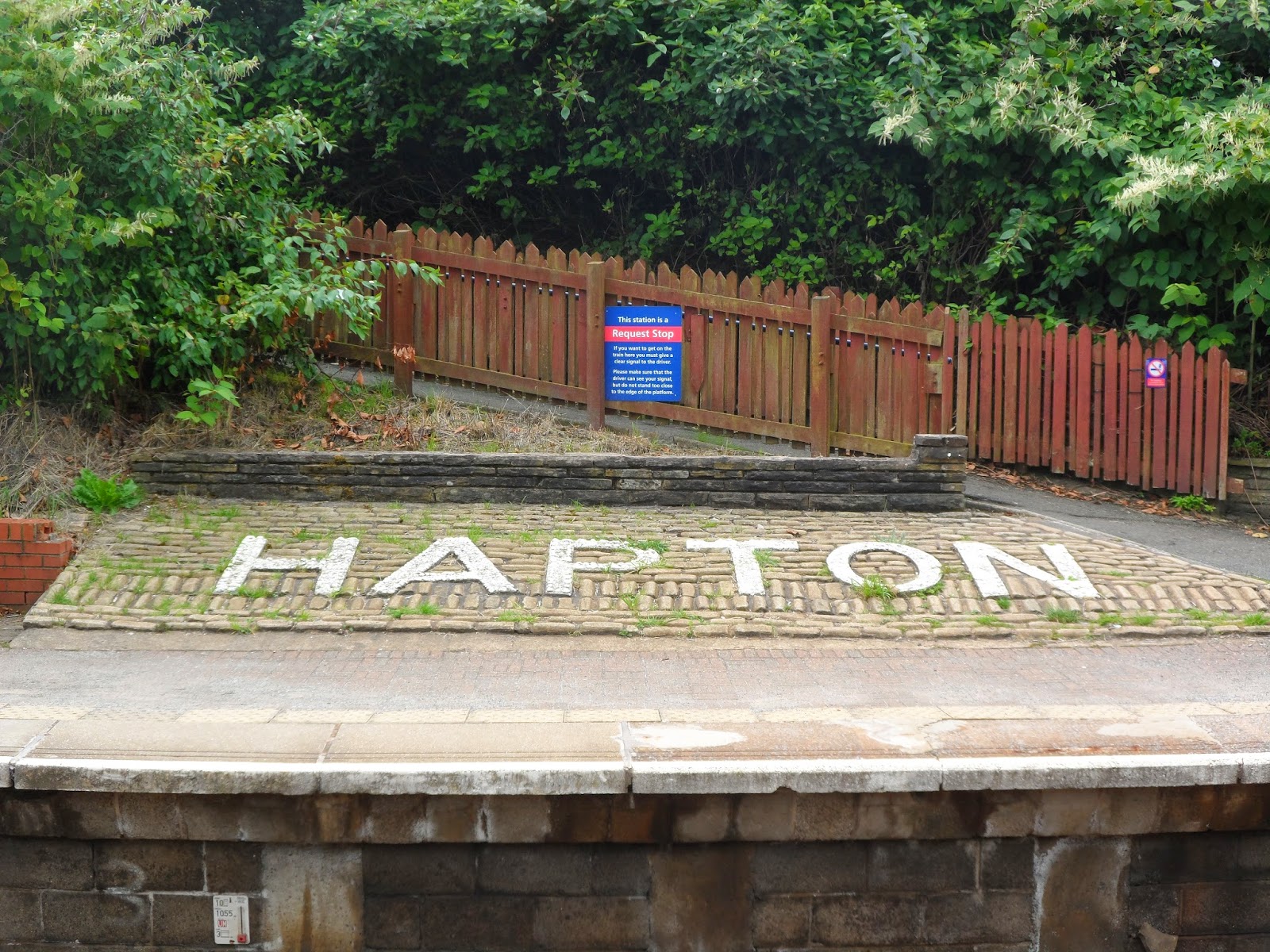 My first station was Hapton, a request stop in the shadow of the M65.  I didn't request it - there were a few people waiting on the platform and I took the opportunity to jump off. 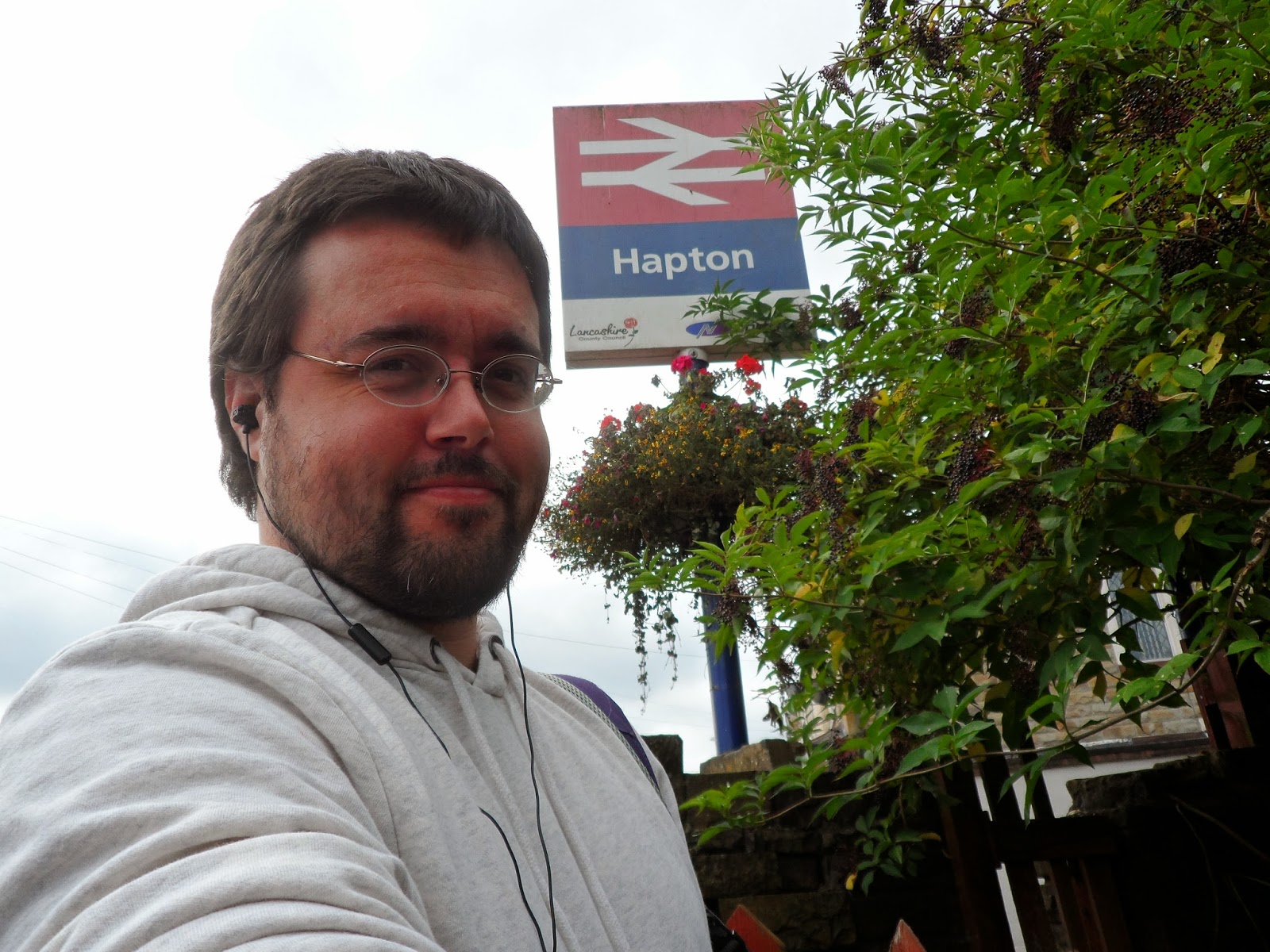 Up top, a bridge soared over the railway line and the motorway and took you into the village itself.  It was a tiny little community of straight terraces huddled around a main street.  I nipped into a small newsagents and bought two bottles of water for £1.30 from an incredibly jolly Asian man - his customer service skills were 1000% better than the two members of staff at the Whistle Stop drinking coffee behind the counter and having their own conversation - and continued to the canal bridge. 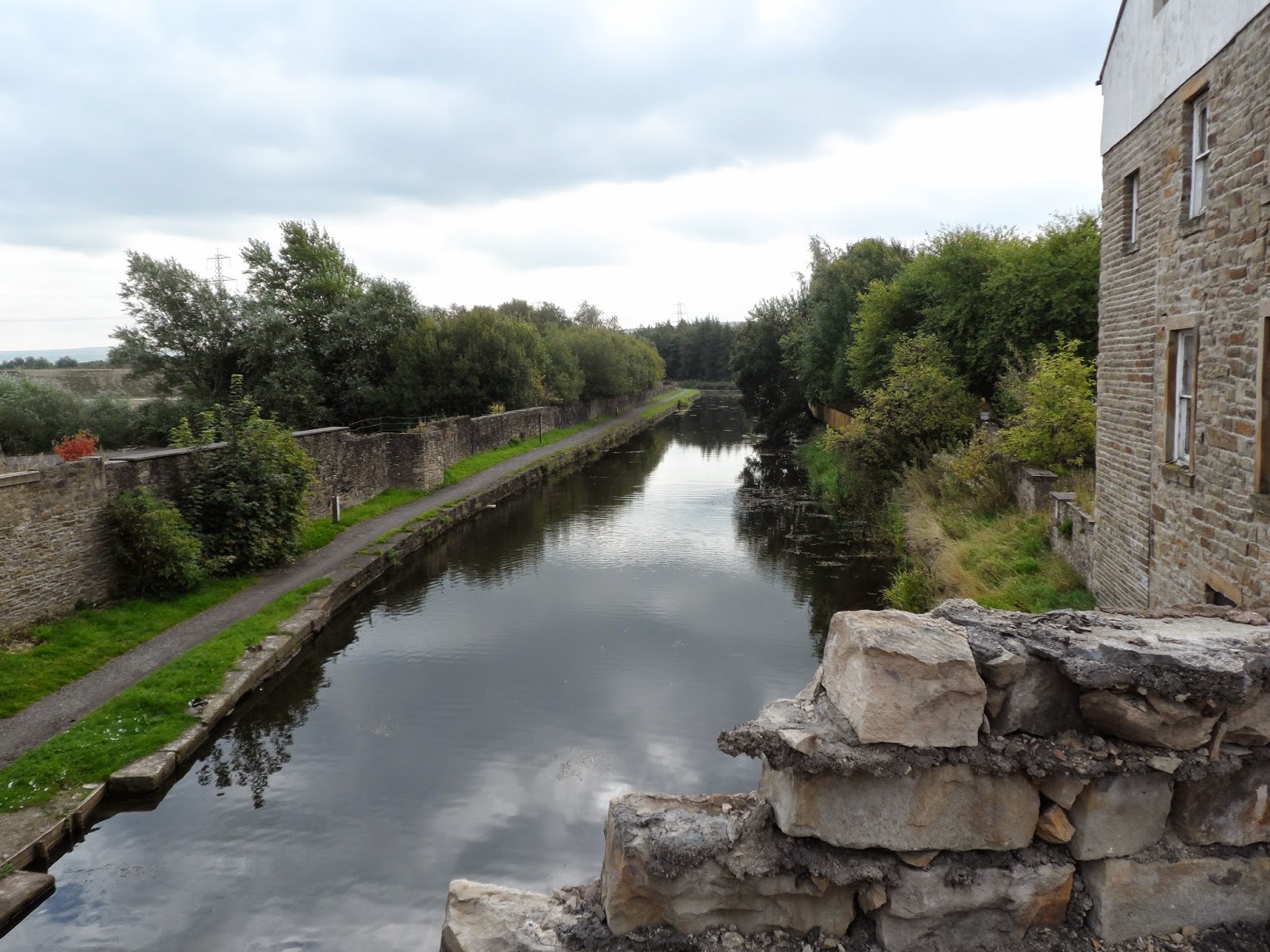 Something bad had happened.  There was a huge hole in the wall of the bridge, with missing bricks, and the carriageway was fenced off.  It was hard not to picture a car swerving madly, slamming into the wall and plunging into the water below.  That might just be my fondness for melodrama. 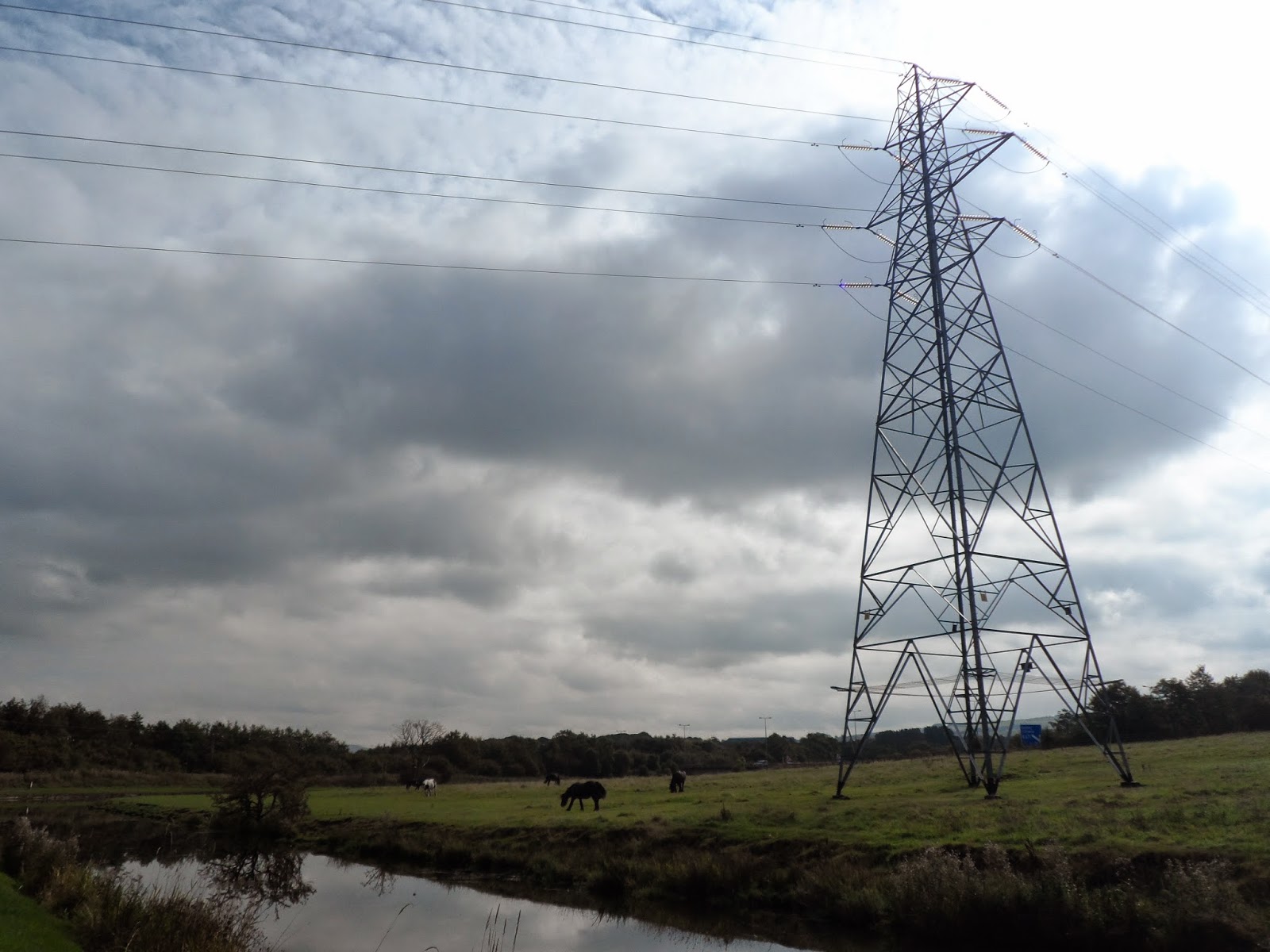 Soon I was following the Leeds and Liverpool Canal towpath.  It wasn't a particularly pretty stretch.  There were industrial estates on one side, and the motorway on the other.  Electricity pylons fizzed and crackled, driving away any potential fishermen.  It was well-used by dog walkers though; in fact I'd like to take this opportunity to apologise to the lady who came round the corner just as I was adjusting my sweaty testicles.  I'm sure finding a man shifting his bullion by the side of the canal wasn't top of her wish list. 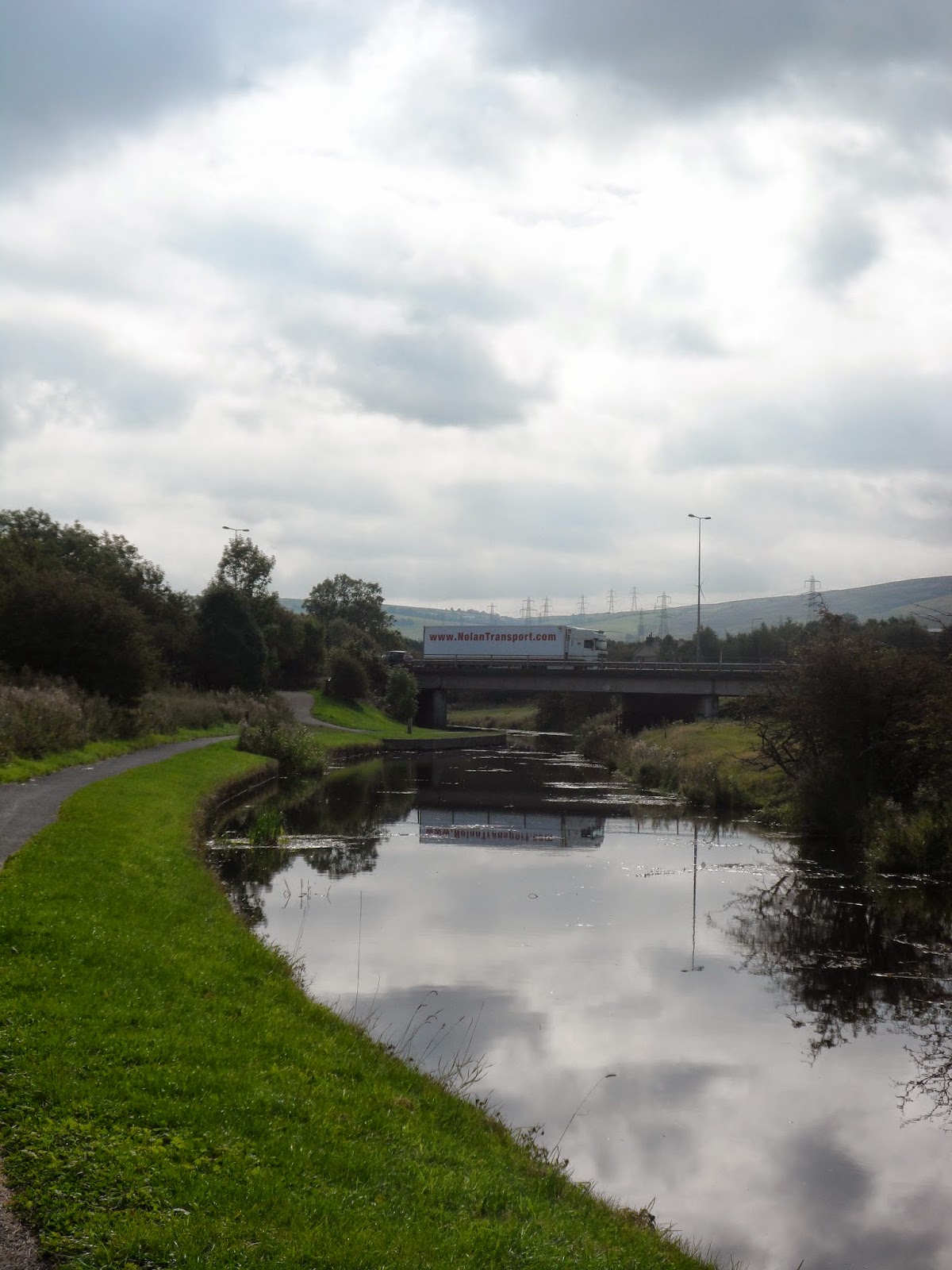 Under it all was the thrum of the traffic on the M65.  It's a relatively new motorway, with its last section opened in 1997; confusingly, that was the section from junction 1a to junction 6, with junctions 7 to 14 having been completed years before.  The official reason for its construction is to service the industry of the Calder Valley, as a major regenerative tool, but that seems odd.  It doesn't really go anywhere, and when it does go somewhere, it's only Preston.  Its eastern limit, however, points hopefully towards Leeds, hinting that it was once intended as another cross-Pennine route.  There's no chance of that ever being built now.

The towpath ducked under the road, and I was surprised that even out here, away from the urban sprawl, there was graffiti on the concrete.  One proto-Banksy had stencilled Ginger Bastard on one of the columns.  I was confused.  Why would you go to the effort of making a stencil?  And who was the ginger bastard in question? 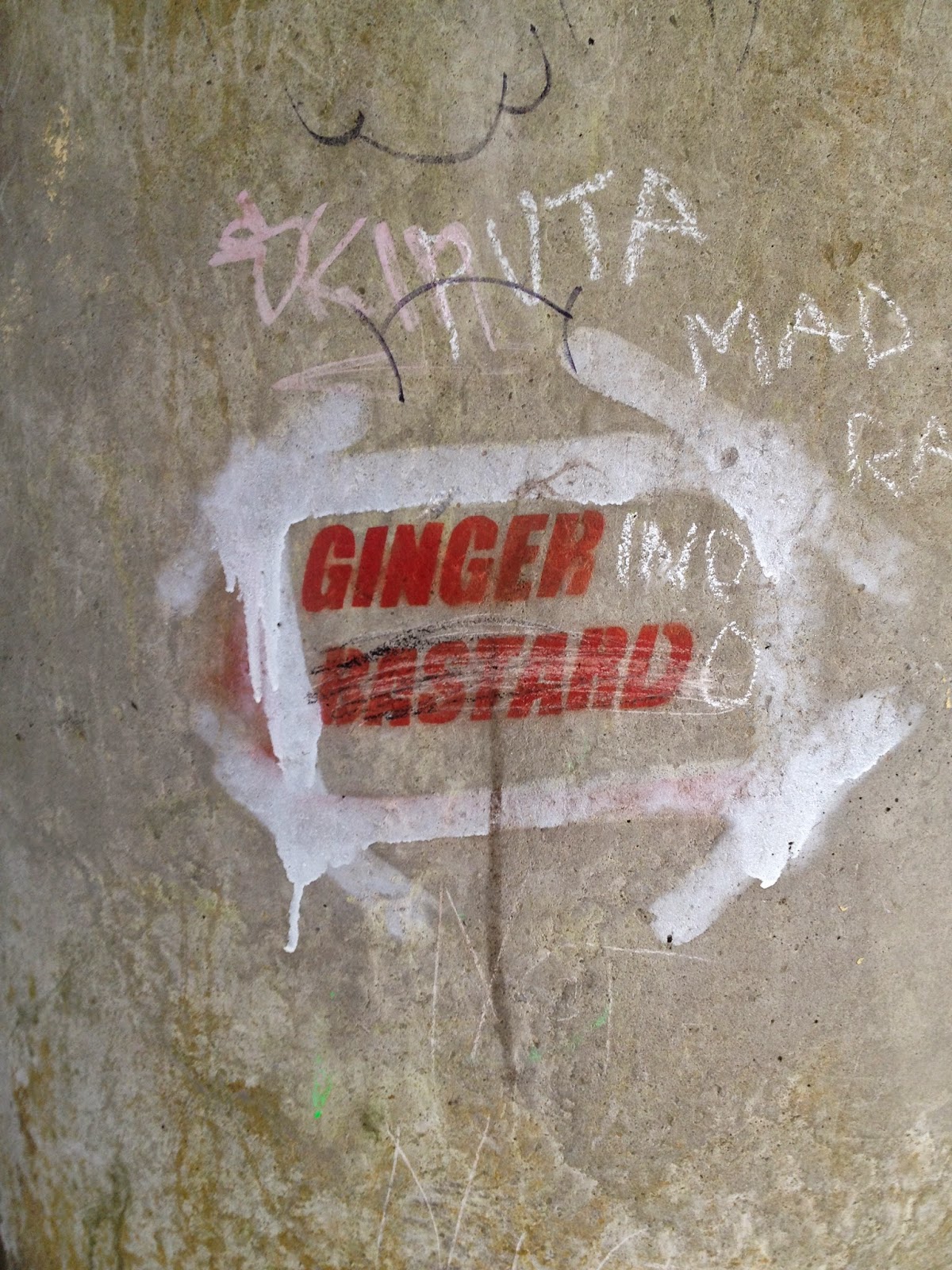 The canal went under the motorway again, then under the railway line, and then I was on the fringes of Burnley.  I clambered up to the road via a set of steps - dislodging two people who were sat on them eating their sandwiches - and walked the short distance to Rose Grove station. 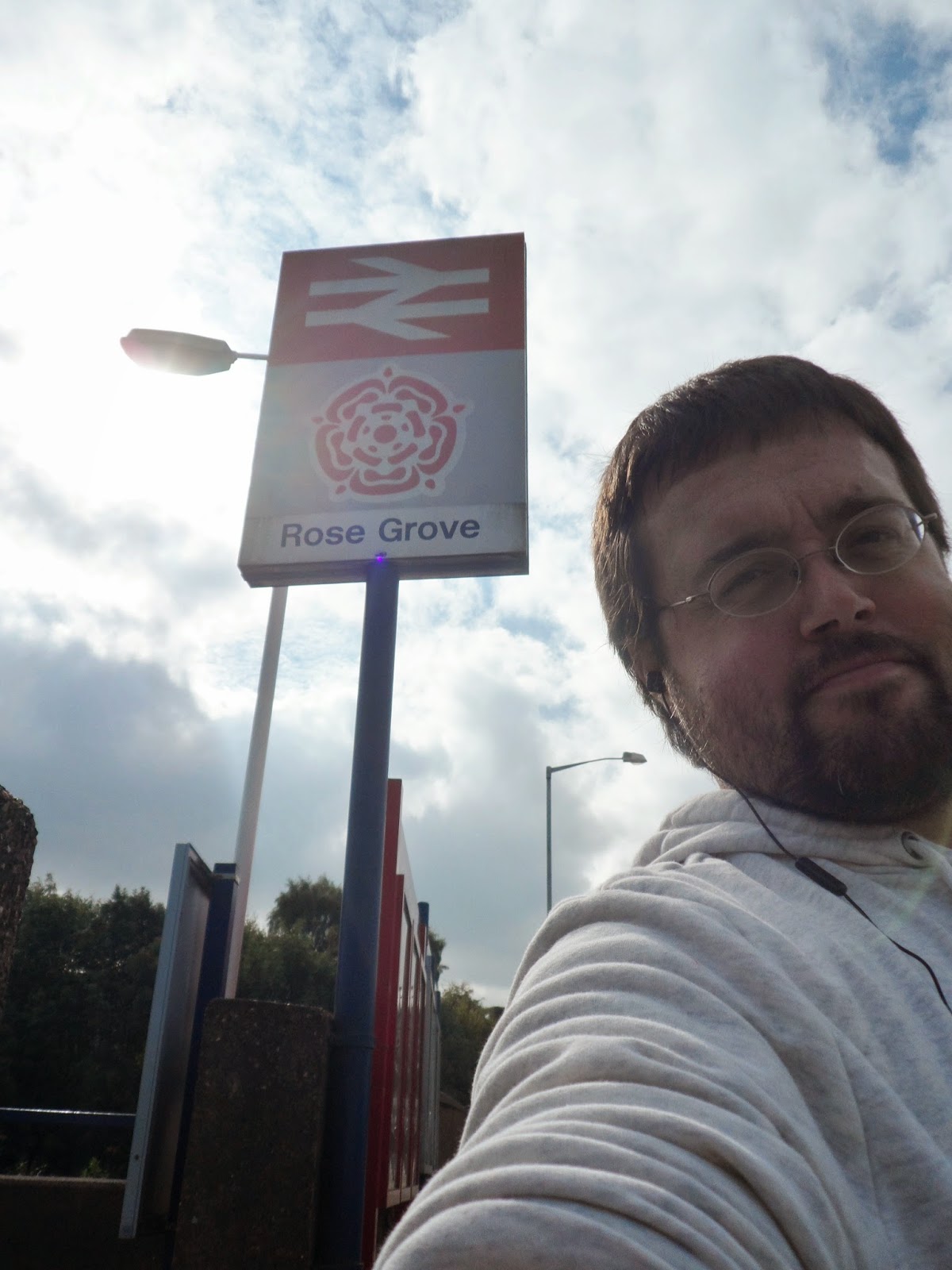 It sounds pretty, but it isn't.  Rose Grove is a single platform between the lines and there's not a rose bush in sight.  Instead I found a shelter filled with a large family having a picnic, the children scattering crumbs and crusts all over the floor.  Through a wire mesh fence the traffic whizzed by. 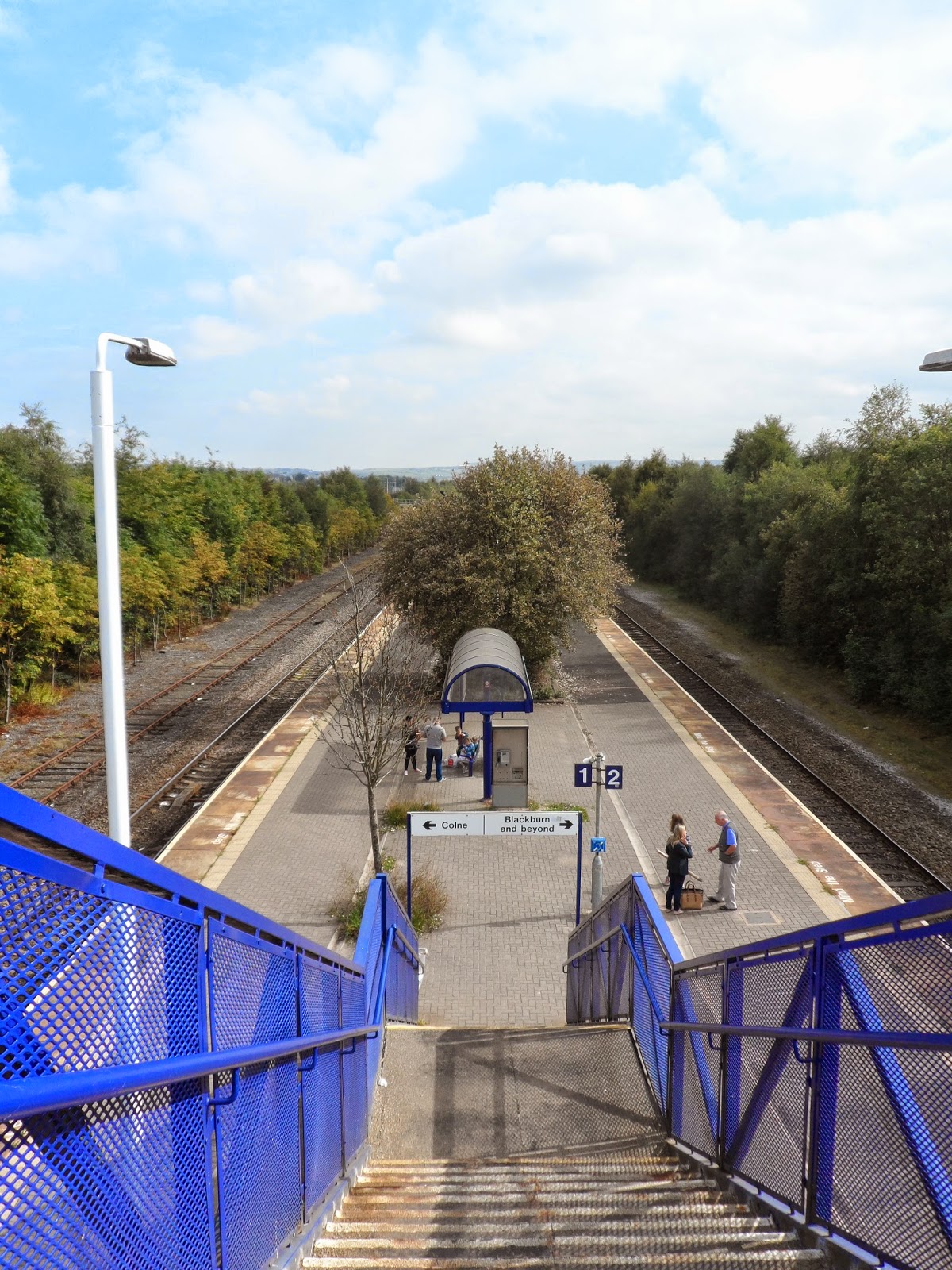 I found a low wall on the platform and sat down for a drink and a bite to eat.  It was a strangely warm day.  Is it not meant to be September?  Shouldn't we be getting icy chills and rainstorms?

The Blackpool bound train arrived and took all the other waiting passengers away, then a few minutes later, the Colne train arrived for me.  The line splits further along.  There's a large, heavy route to Leeds that peels off towards the south of Burnley town centre, while I continued on the single track to the north.  The single track means that the service along here is severely restricted - there's nowhere for the trains to pass one another. 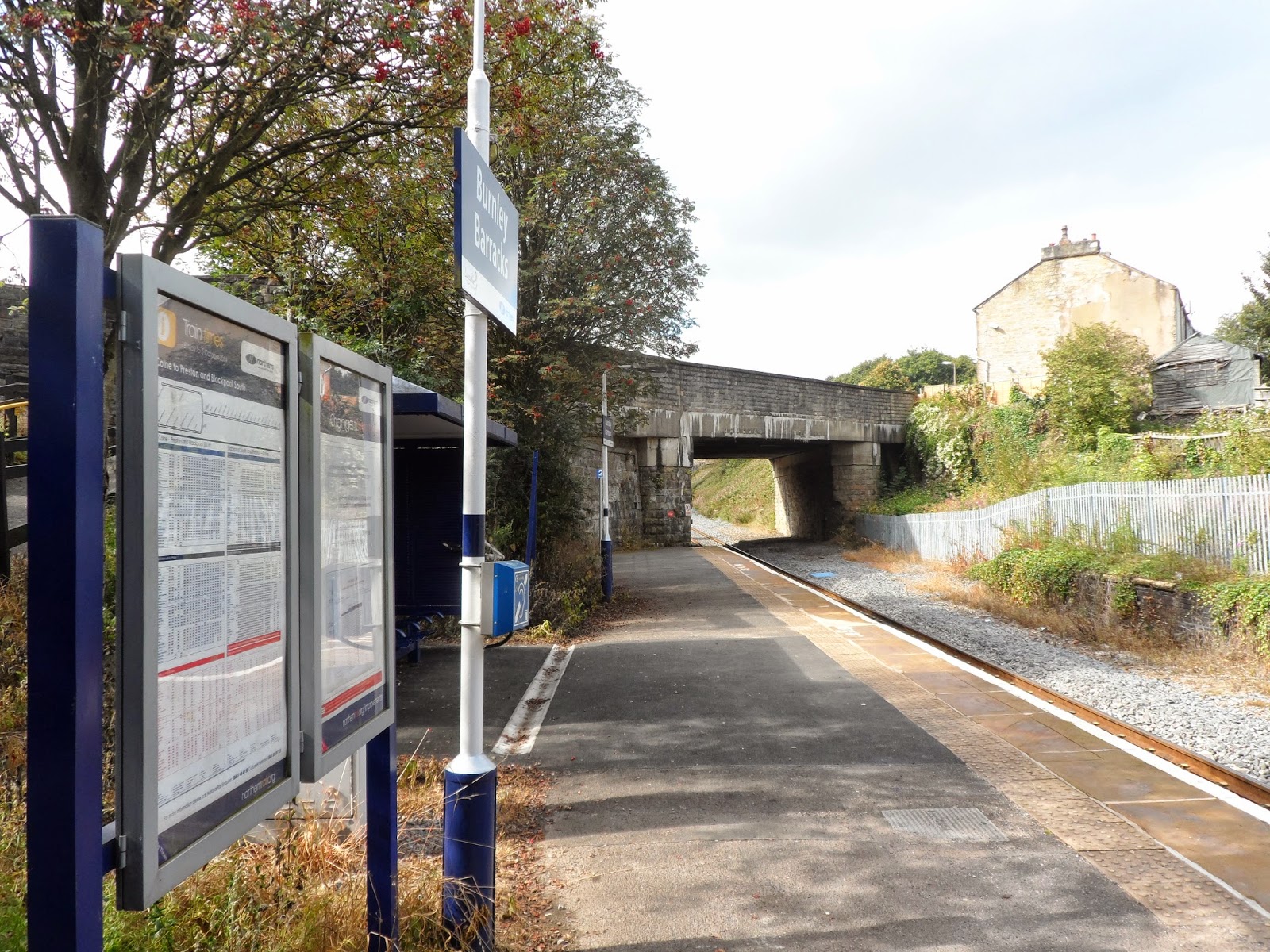 I alighted at Burnley Barracks.  Disappointingly I wasn't greeted by a fit squaddie.  When it was built this was a busy, built up area, but road improvements and the demolition of slums have meant that passenger levels have plummeted.  Which is handy, because it took me about fourteen tries before I got the sign pic: in a more populated area I'd have been spotted as a lunatic and reported to a constable. 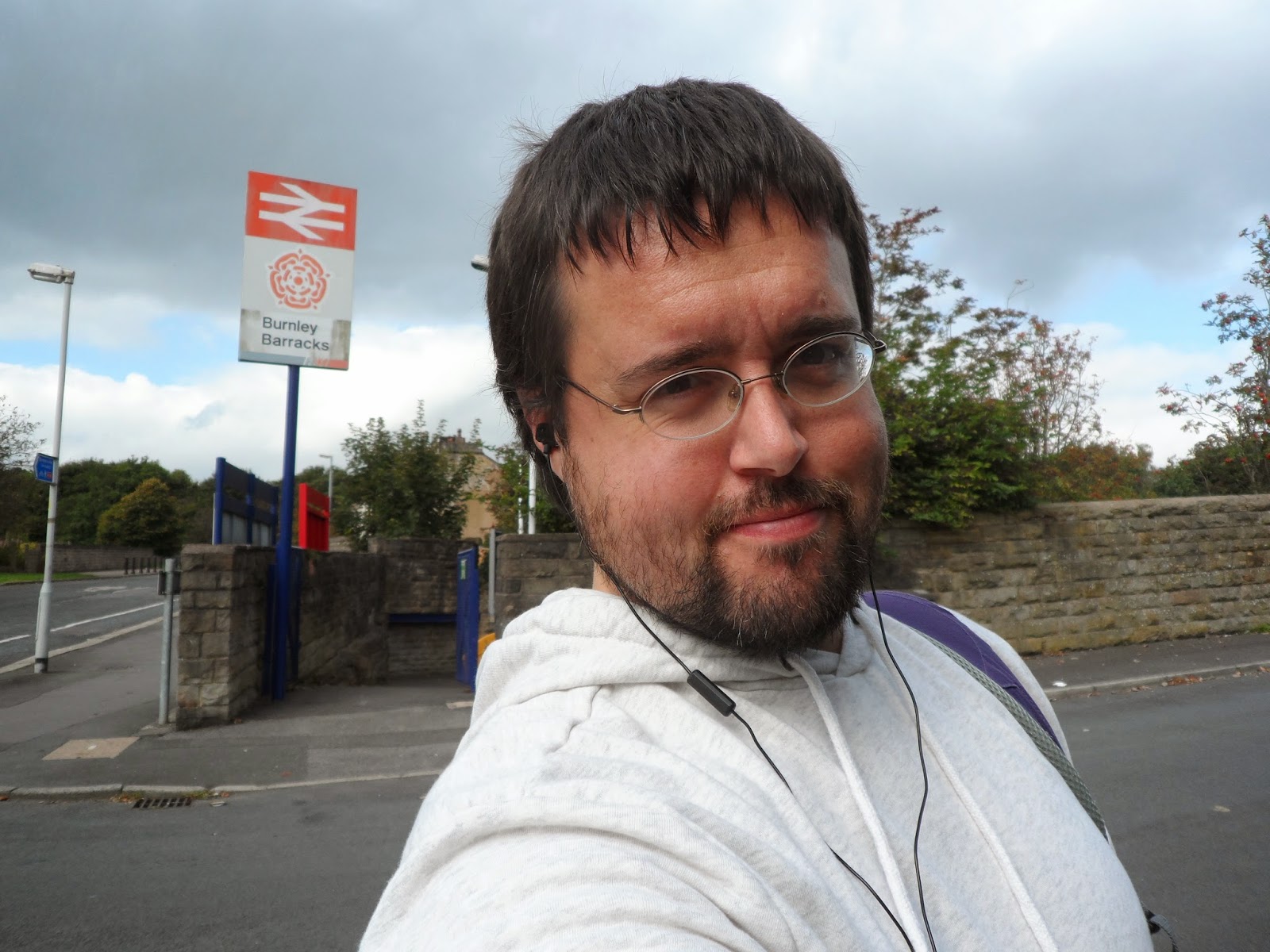 The road dropped away steeply towards Burnley town centre, with houses built on the side in a cascade of rooftops.  Small industrial units peppered the side roads: one had a sign warning lorries not to use its entrance as it was too steep for vehicles.  I paused by an abandoned car park to take in the Burnley viaduct, an impressive piece of Victorian engineering that carries a bare minimum of trains these days. 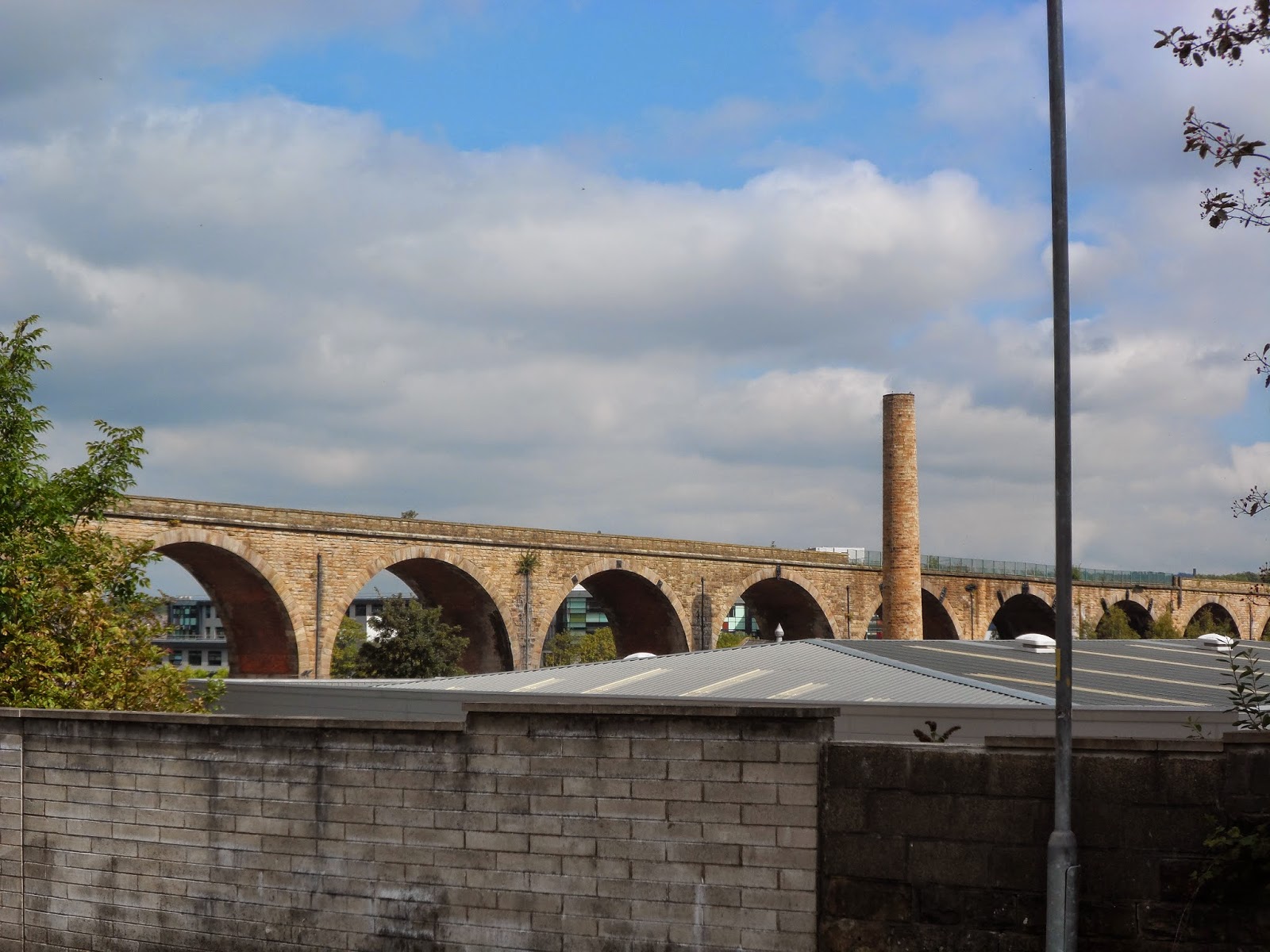 All towns in the North, to some extent, are struggling to find a new role post-industrialisation.  The councils are forced to allocate their limited funds for regeneration - new ways to attract people and businesses to towns bearing the scars of Thatcherism.  Sometimes it's transport facilities, sometimes it's tourism, sometimes it's vast new business parks.

Burnley seemed to have settled on a policy of signage.  There were signs everywhere, for everything.  Barely an old building went by without having a bit of ironwork slapped on the side to tell you its history.  Roads had explanatory notices to tell you the reason for their name.  It was as though the Council had decided that the reason Google hadn't opened its European HQ in Burnley was because they didn't understand the derivation of the town's name (from the River Brun, a metal plaque on a bridge helpfully informed me). 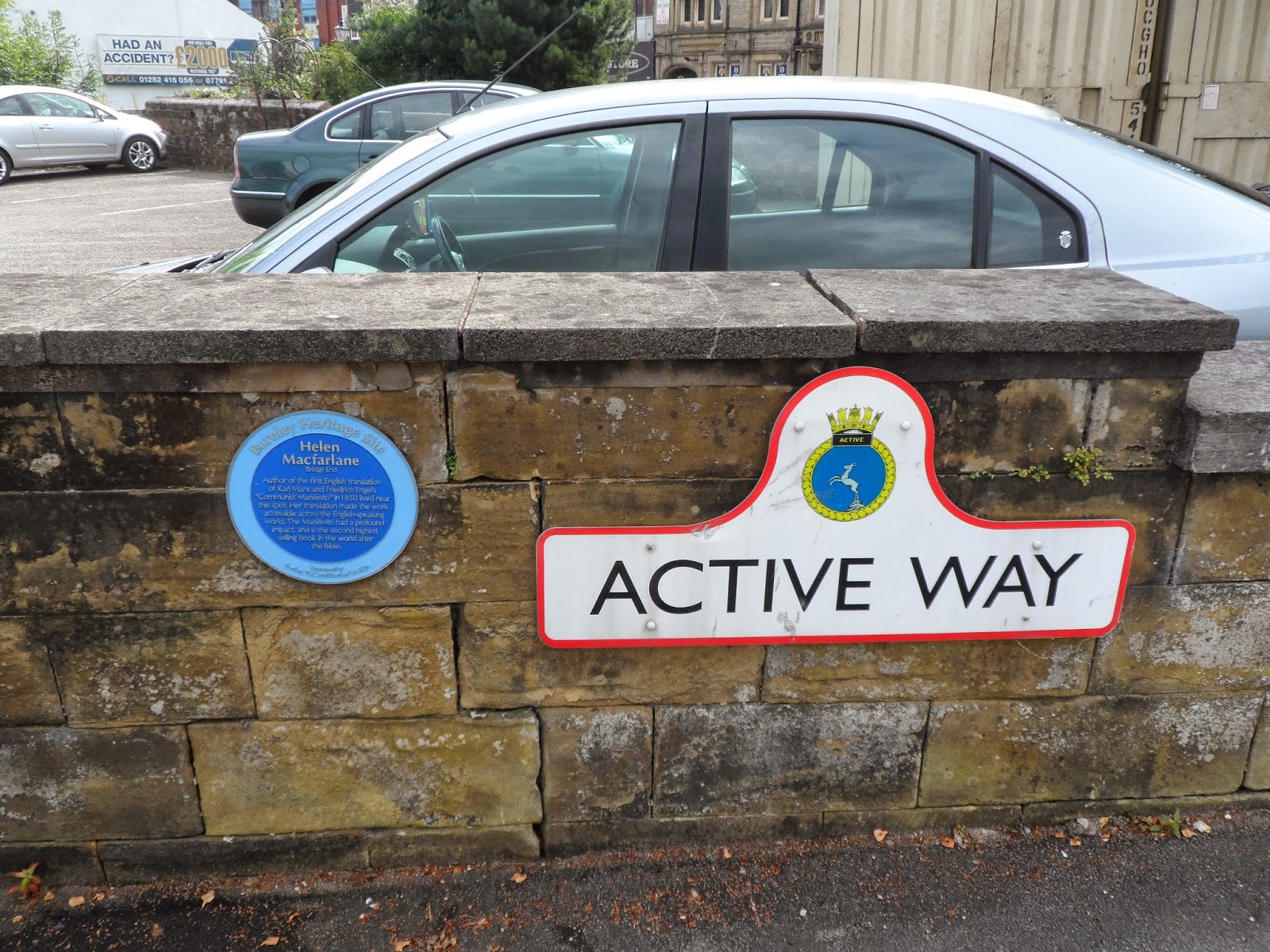 It's a shame they didn't concentrate their efforts on the town centre itself, because that's just a generic pedestrianised zone.  Bright red brick pathways pass between 1960s precincts and a Market Hall.  I nipped into Marks and Spencer and used their facilities before pressing on towards Burnley Central station.  Standish Street was a bit more interesting, with small independent shops, tattoo parlours, and The Emporium, a "Goth shop" selling twisted artworks and everything black. 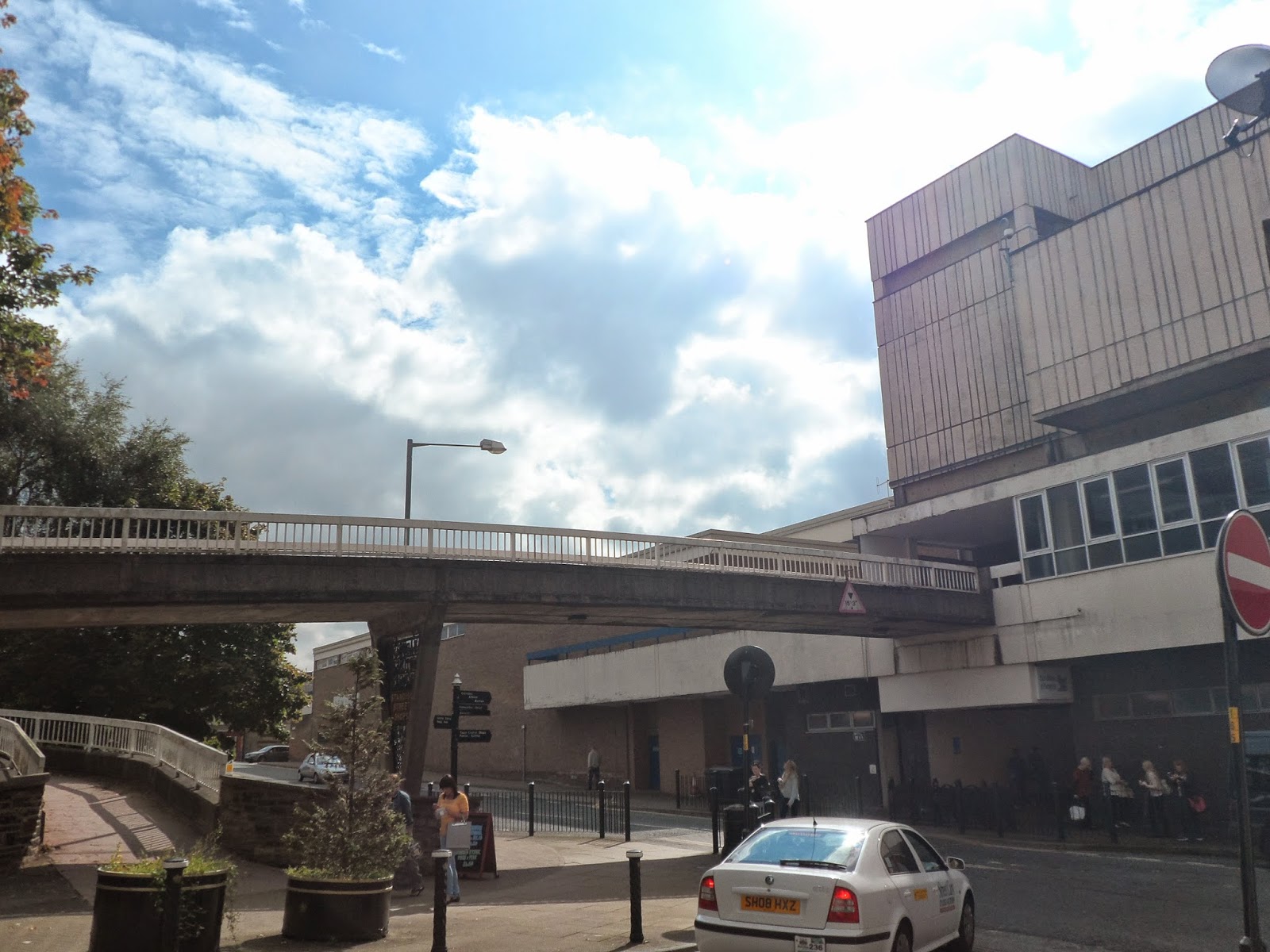 I was joined at the pedestrian crossing by dozens of excitable sixteen year olds.  Burnley's Sixth Form College is just behind the station, and the local A-level students had obviously just nipped into town for lunch.  In amongst their happy, carefree faces, with my sweaty hoodie and my thick beard, I felt very old and very sad. 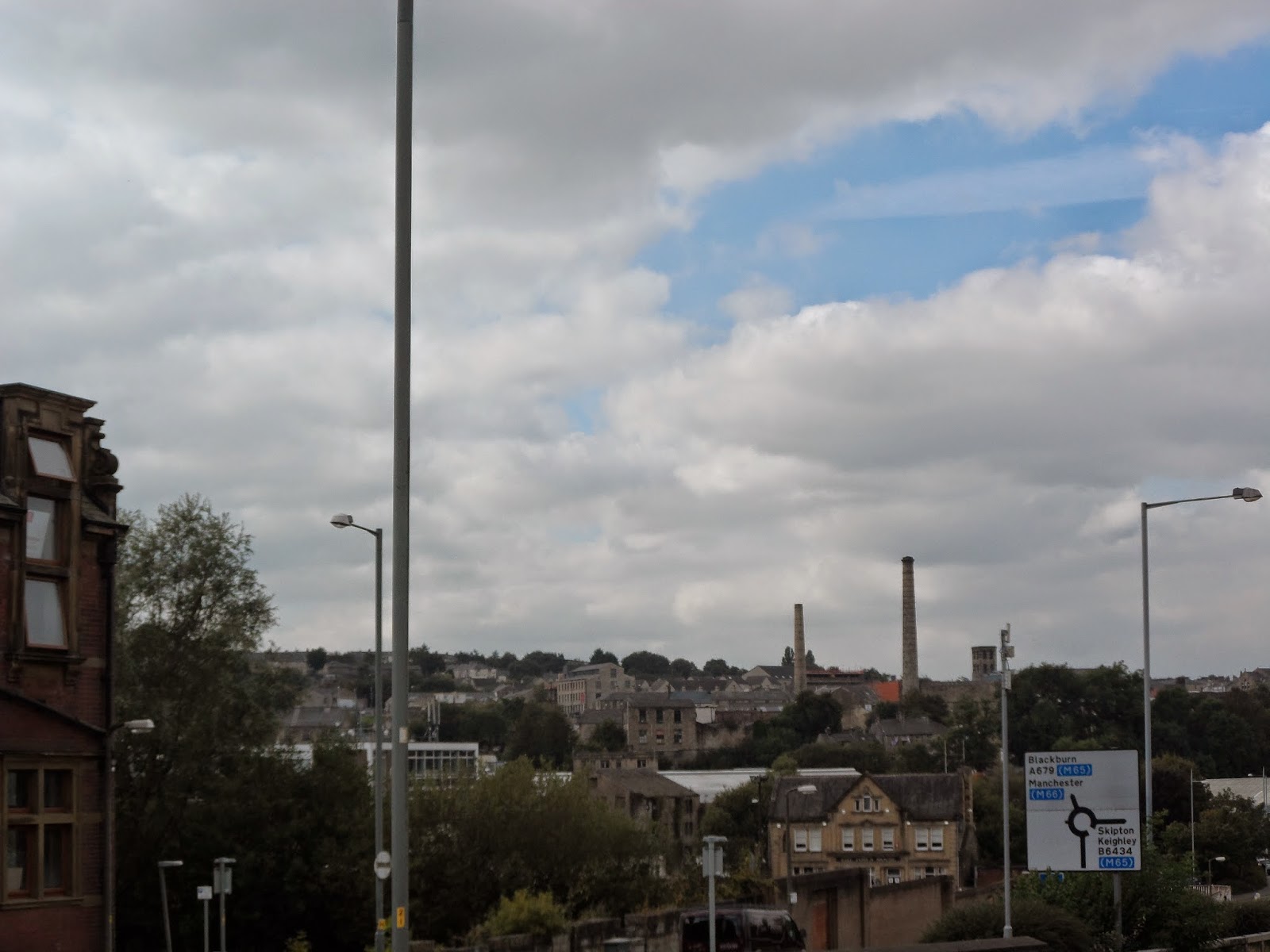 There was still twenty minutes or so until my train so I nipped to the Sainsburys across the way for a cup of tea.  I was delighted to find it was only £1 for a decent sized cup to take away, and I made a mental note to absolutely recommend this on the blog. 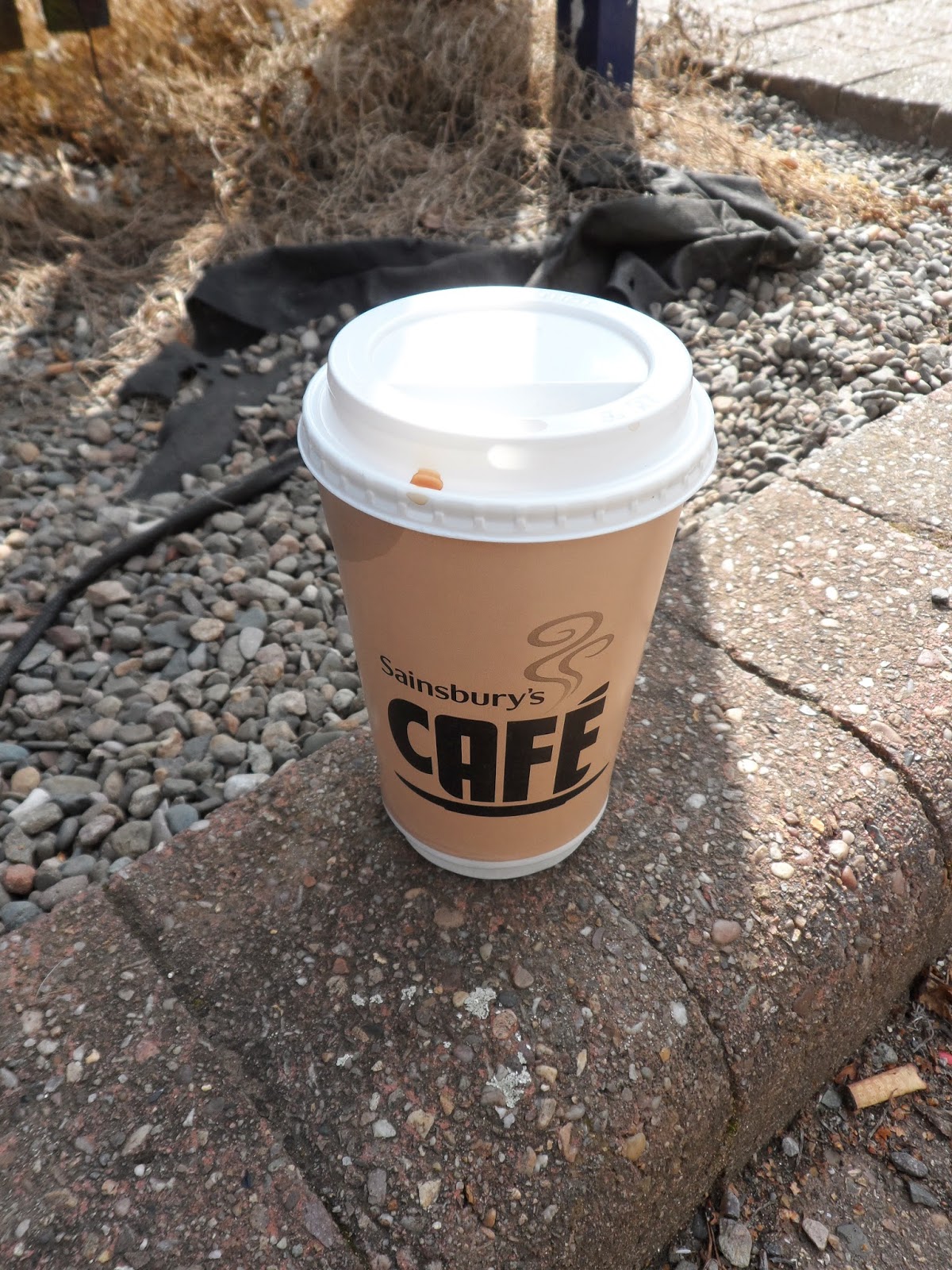 Unfortunately it tasted awful.  What I managed to taste, that is.  It was hotter than an Icelandic volcano, and the man in the store didn't put the lid on properly so I managed to spill it over my thumb.  I now have a nice blister there.  I also managed to spill some down my front, which I didn't realise until an hour later.  This wouldn't be a problem unless I was wearing a white top - OH WAIT, I WAS.  I had a four inch brown smear right across my stomach.  And when it finally cooled enough for me to be able to consume it, it tasted of ash and despair.  It made me unaccountably furious.  How hard is it to get tea right?  This is ENGLAND. 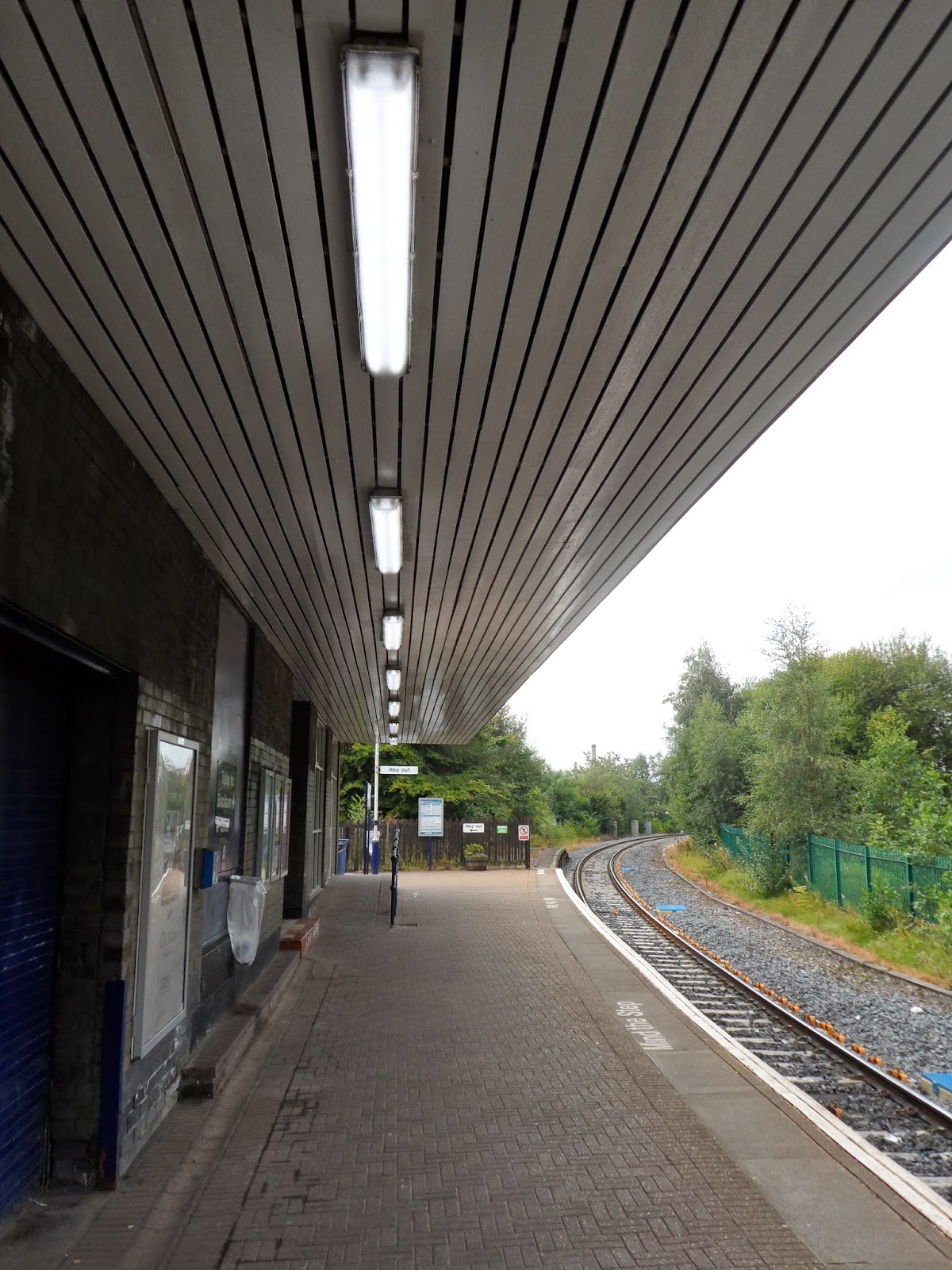 I chucked the remainder of the tea over the bushes and headed into the waiting room for a seat.  Burnley Central is a sad little station, whose name gives it a grandeur it doesn't deserve.  It's a 1960s box built up from the road - the track is still at height here from crossing the viaduct - so it presents a blank face to the street and access is via stairs and ramps. 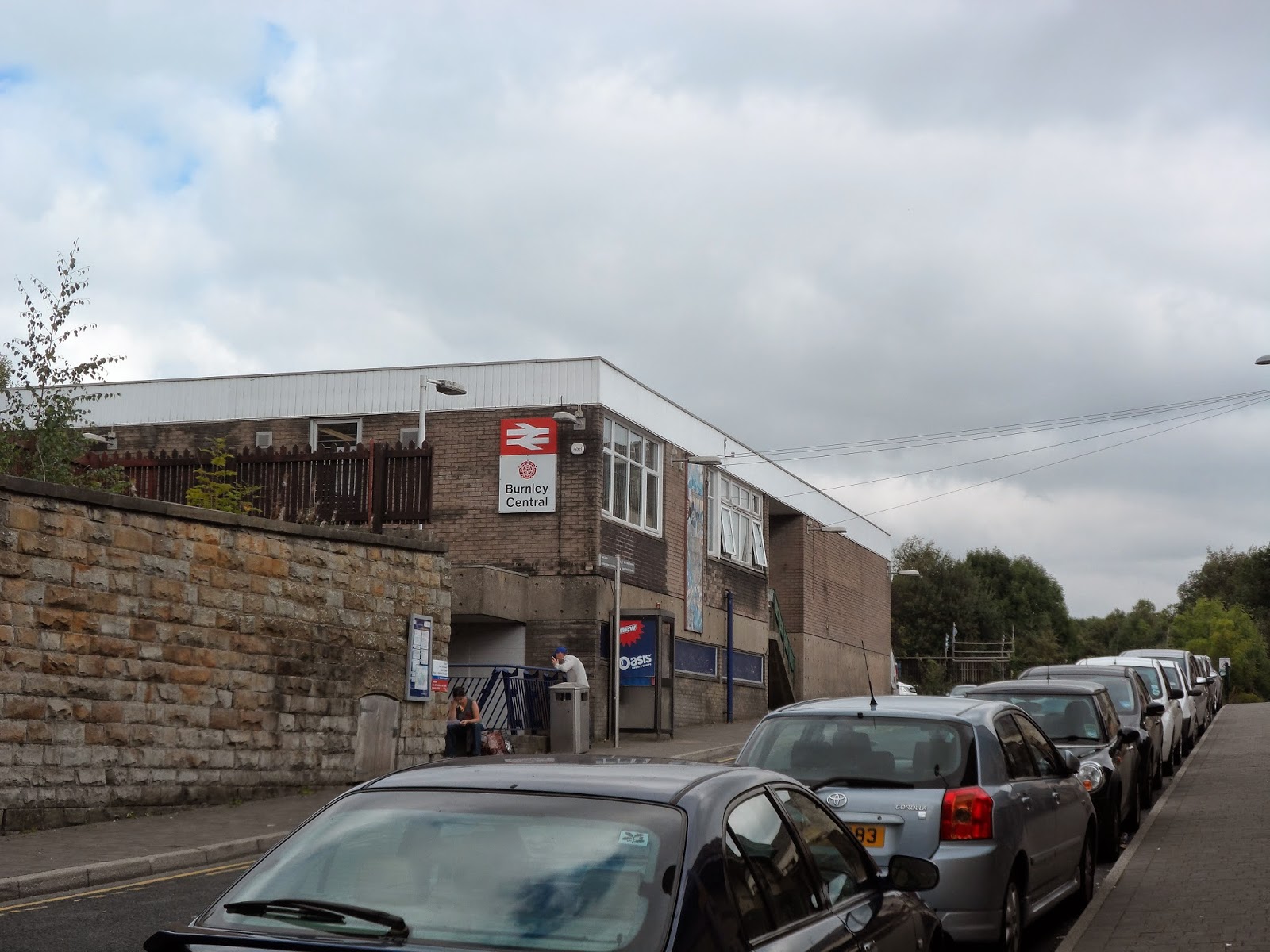 The waiting room, meanwhile, has had a Northern makeover, purple and blue and shiny metal seats.  A young couple were keeping their child in a pushchair entertained while behind the counter the two railway employees talked amongst themselves.  I took a dislike to the employees of the station because of an A4 sign on the front of the toilet, informing passengers that it was for disabled customers only.  Able bodied passengers were redirected to Sainsburys or Asda.  That's just petty. 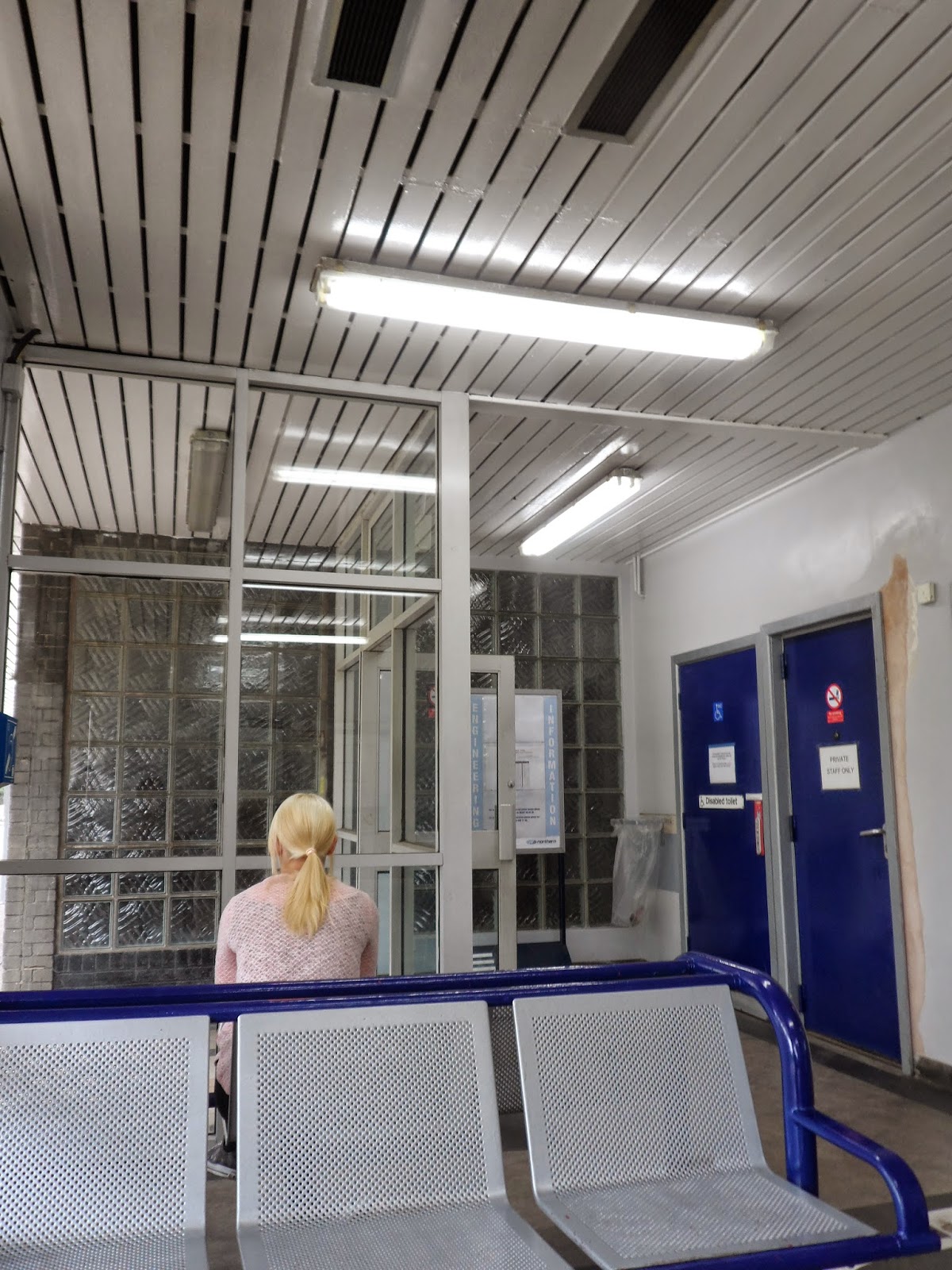 There was a moment of grace though, a sign - this is Burnley after all - in memory of Graham Nuttall.  Readers with long memories might remember him from when I visited Garsdale on the Settle & Carlisle line; he was an active railway campaigner who sadly died while hiking in North Wales.  I felt a strange rush of emotion looking at the sign, and a delight that I was able to pay him the proper attention he deserved after I'd missed the statue at Garsdale. 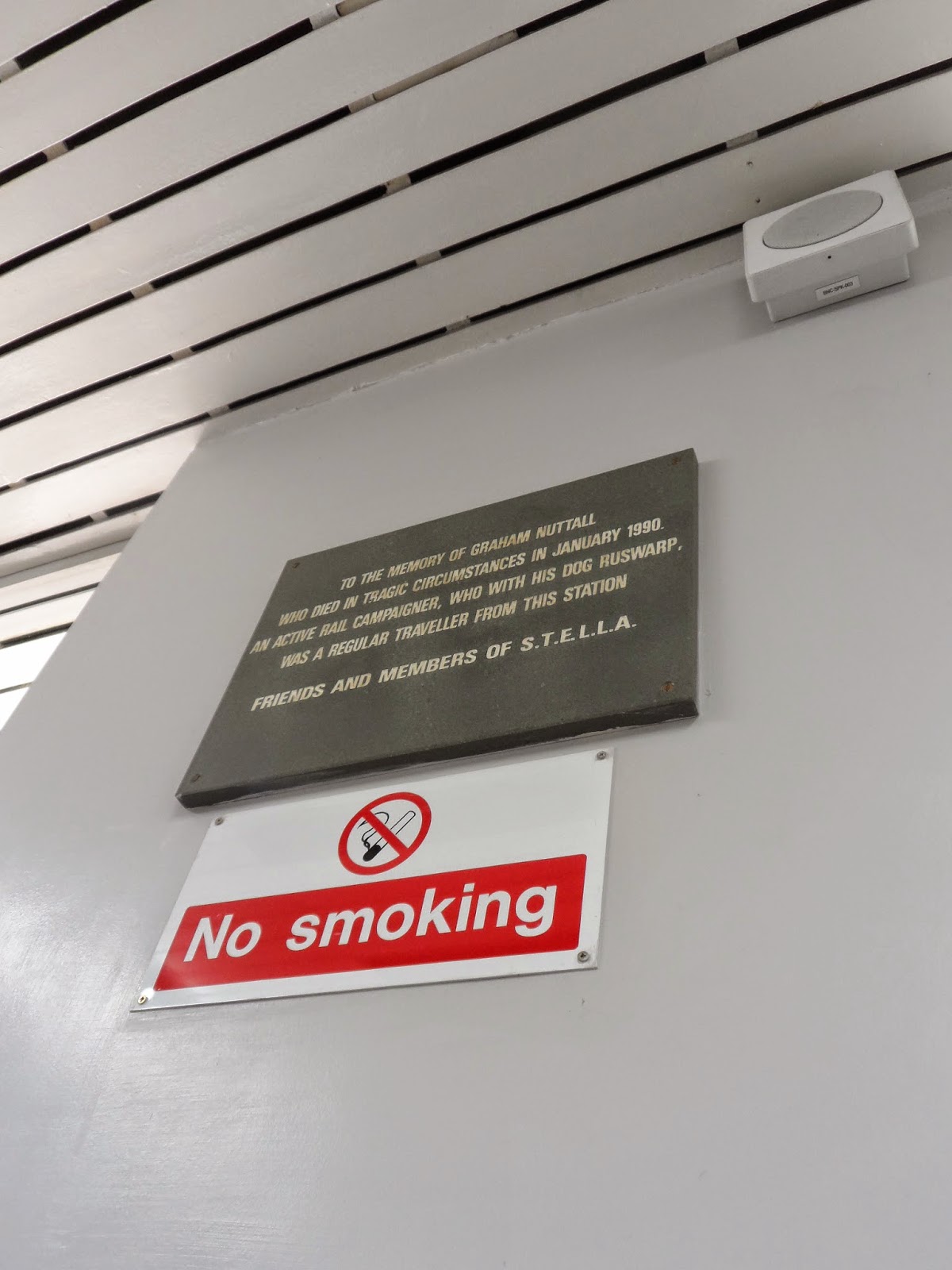 I was feeling a bit miserable.  The East Lancs line wasn't driving me into raptures.  It was all so ordinary.  I hoped it would perk up further down the track. 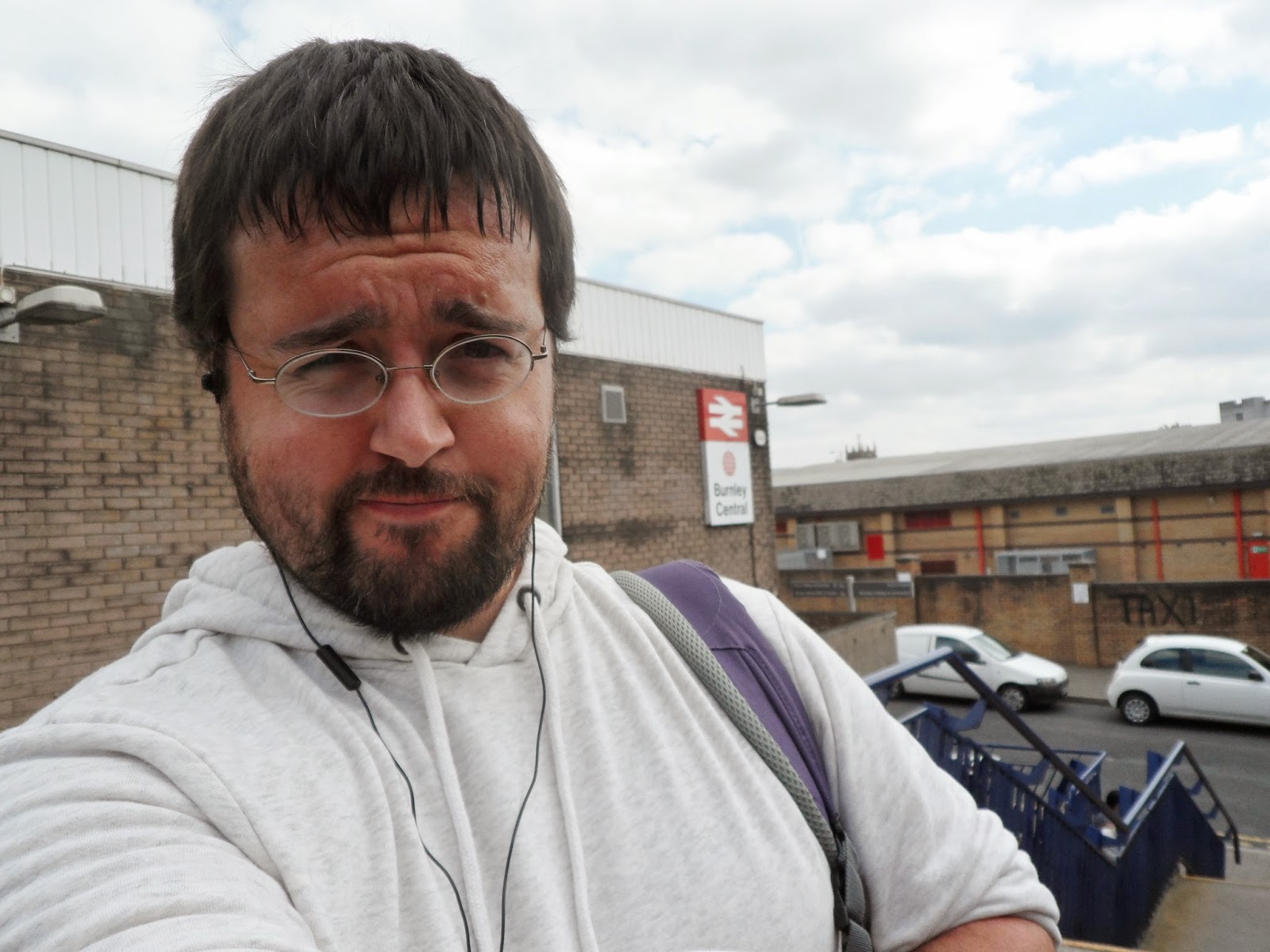 You talk about Volvic and there is something that I don`t quite understand. If it has been filtered through volcanic rock for thousands of years, why does it say `Best Before` on the label ?