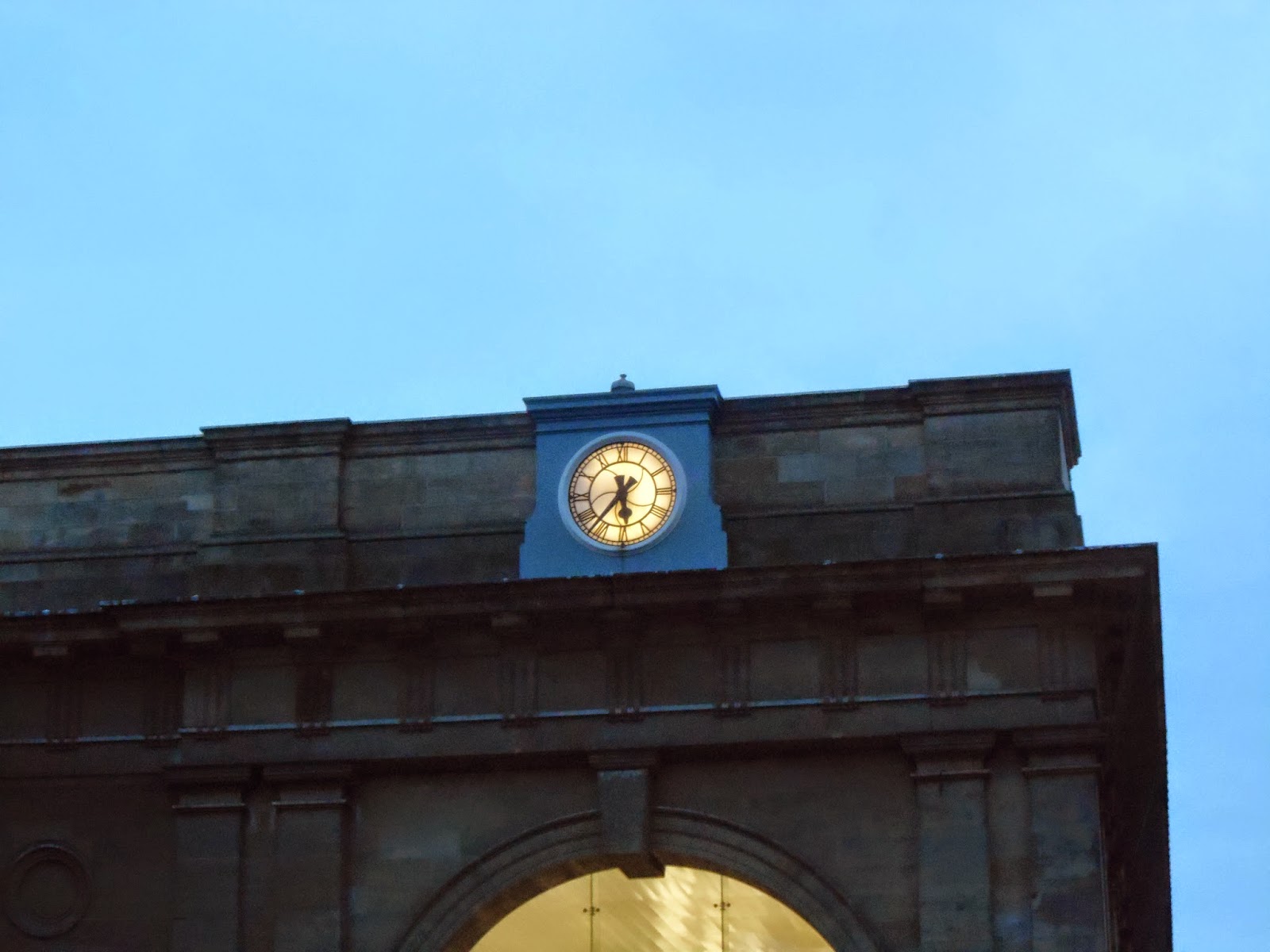 There's a unique alchemy at work in near empty railway stations.  I was in Newcastle Central not long after it opened.  Most of the shops were closed.  The ticket barriers were unmanned, their gates folded back.  There were no trains passing through.

That's where it became magical.  A railway station without trains is holding its breath.  Each part of it is ready to spring into action; it just needs the first grind of a train to make it happen.  Platforms offer promise.

I clacked across the tiled floor, my walking boots echoing in the empty space.  The other people about were still half-asleep.  They wanted to be somewhere else, at home, in bed, being cuddled.  It was too early to be lively.  The exception was two lads sat on a table outside Costa, fizzing with excitement and energy. They had backpacks at their feet and were playing cards, whacking down hands, laughing, ready for their adventure. 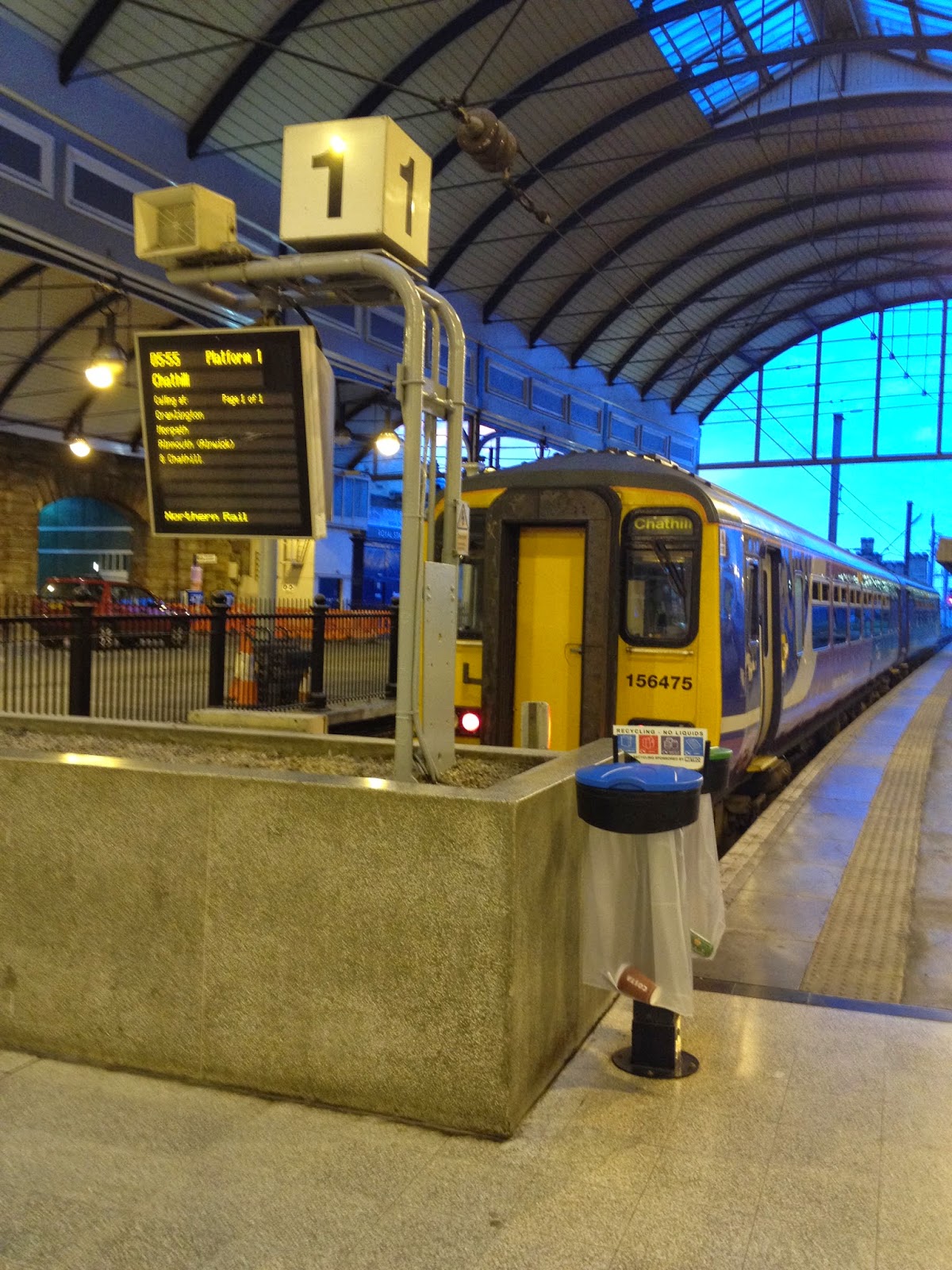 My train was waiting for me on the platform, but it was dead.  Silent and cold.  I bought myself a chai latte from the sole open store - Costa - and took a seat by it.  After a few minutes, the driver arrived, and he coaxed the Super Sprinter into life.  The diesel engines coughed, a thick gruff clearing of the throat, then it began to throb.  A pulsing clatter over and over.  I felt a strange moment of nostalgia for it.  Electrification means that these diesel workhorses are going to be pushed to the edges of the network; they'll be on the fringes and won't visit the big cities any more.

A flicker and the white fluorescents of the carriage came to life.  They were the brightest light around; yellow downlights pooled subtly on the shiny floors, but the train was a bar of glowing phosphorescence.  Then another kind of light: the orange circle around the "door open" button. 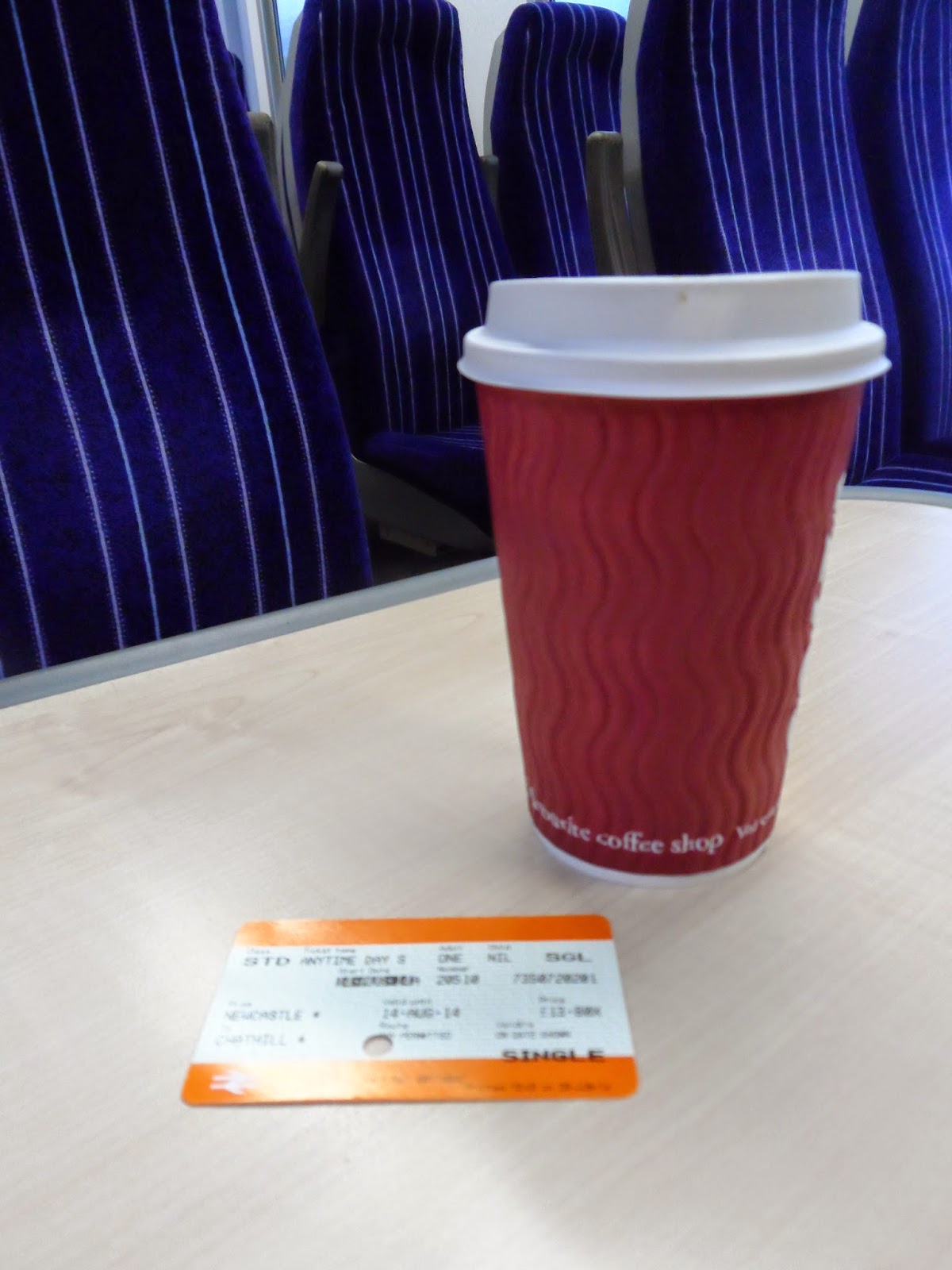 This was the 0555 service from Newcastle to Chathill, and I was the only passenger.  Not surprising.  It's a token service that no-one really uses.  The train travels over the East Coast Main Line, the route from King's Cross to Scotland, and there are larger, faster, more important trains that need to use the rails.  A dinky stopping service calling at quiet Northumberland villages is an inconvenience, but no-one has the heart to kill it completely.  Instead they run a token service: one train north in the morning, one in the evening, and the same going back.  A loop just beyond Chathill lets the train reverse.  It's useless to all but the most committed commuters.

The guard checked my ticket with disdain before heading to the front of the train and staying there.  I guessed that he and the driver saw this as a nice easy way to start their day with no passengers getting in the way.  I pictured them sat in the cabin sharing a flask of tea. 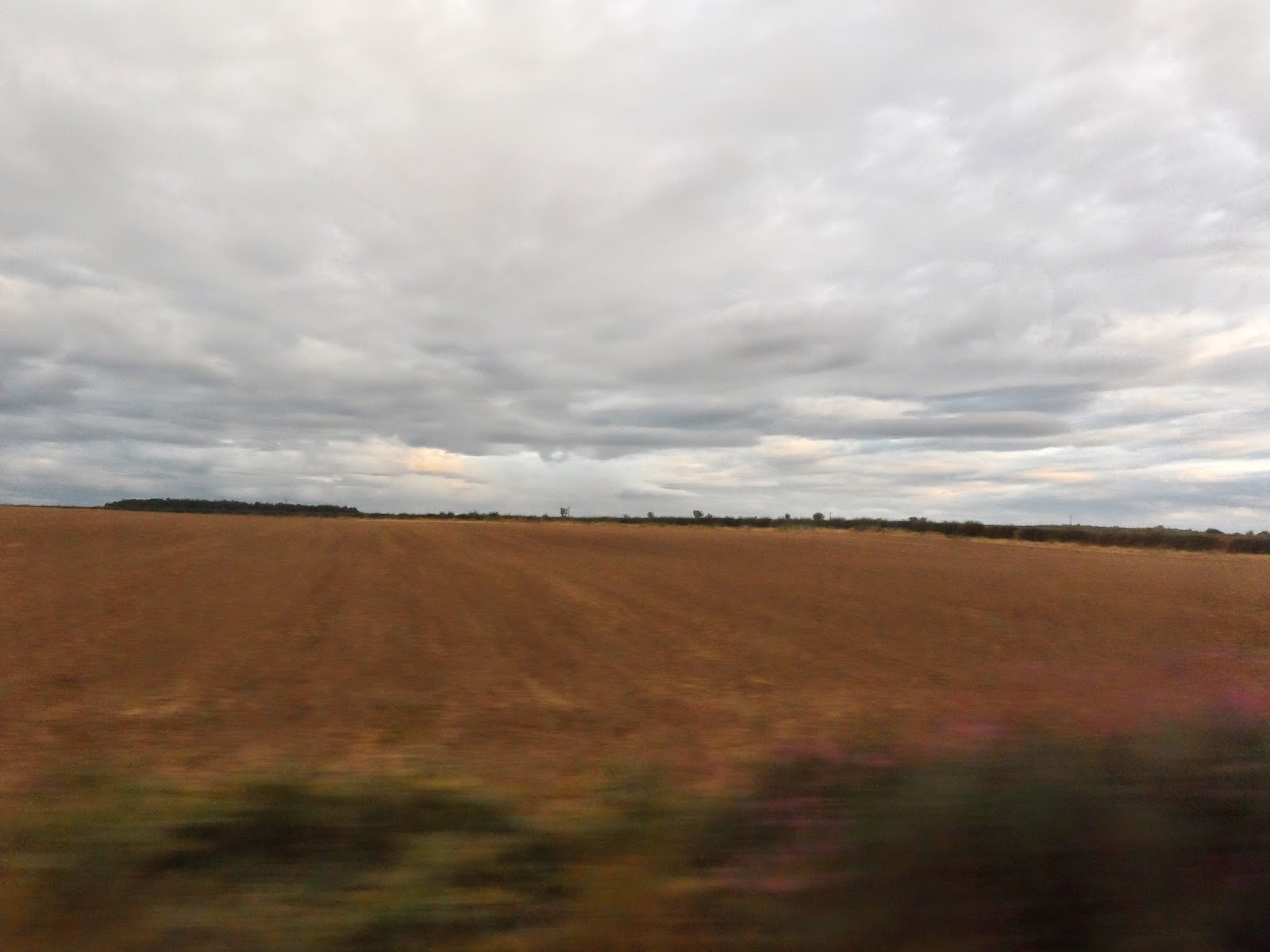 As we tore out of Newcastle and into the countryside the skies changed from violet to grey.  Night receded to leave the odd glimpse of sun behind thick clouds.  It felt as though we were travelling impossibly fast.  The engine was a constant drum in the background as the train was pushed to its maximum; InterCity speeds being wrestled out of a rickety old lady.  The driver must love it.  This is why he became a train driver, not to pootle around brown suburbs, but to burn through the countryside.

A level crossing whizzed past, barely more than a track and a gate.  Morpeth came in a blur of flat roofed extensions and conservatories.  The wheels protested loudly at being forced to stop.  There were no passengers, just as there had been none at Cramlington before it.  Two stations down, two to go.  Then we were out at maximum again, the driver doing whatever the railway equivalent of foot-down driving is.

Alnmouth appeared alongside, embarrassingly pretty, a tiny town huddled on a curve in a wide estuary.  The station brought the first sign of other passengers - on the opposite platform, mind, but it was nice to see some life.  On a distant hillside, a herd of cows clustered, determined to create dramatic silhouettes against the morning sky.  The second East Coast train of the morning crashed by; the line was beginning to fill up, and soon there wouldn't be room for this little purple interloper.  I pictured furious Scottish 125s stacked up behind the Sprinter, tapping their wheels impatiently, shouting for it to get out the way. 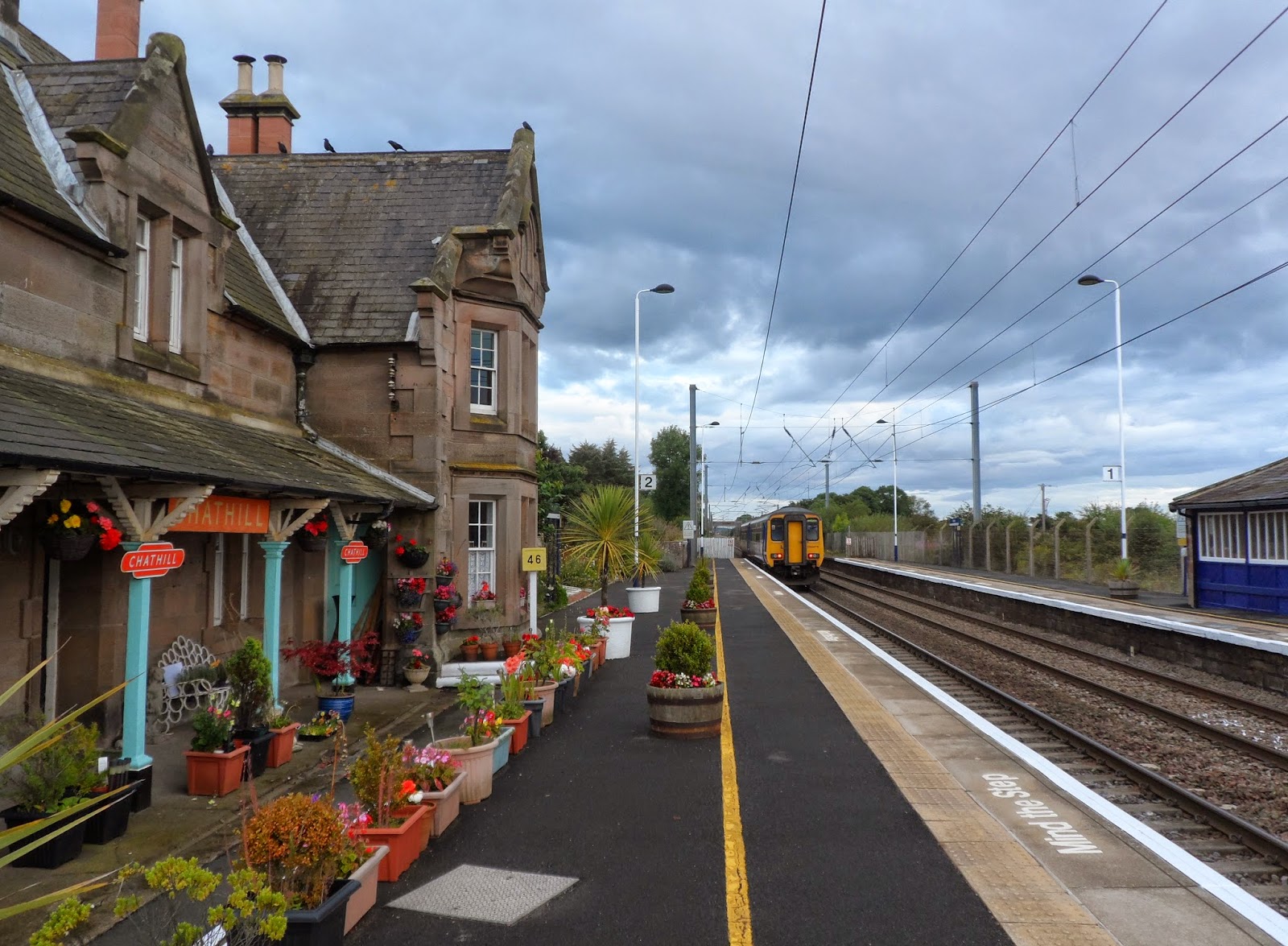 "This is Chathill, where this train terminates."  It was the first time the guard had spoken - he'd seen my ticket, he knew where I was going; there was no point in announcing the other stations.  Chathill is as far north as Northern Rail goes.  It's not the furthest north station in England - Berwick-upon-Tweed, nudging up against the border, holds that distinction - but Northern aren't allowed to go there.  Only the fastest trains, electric ones, are allowed past this point. 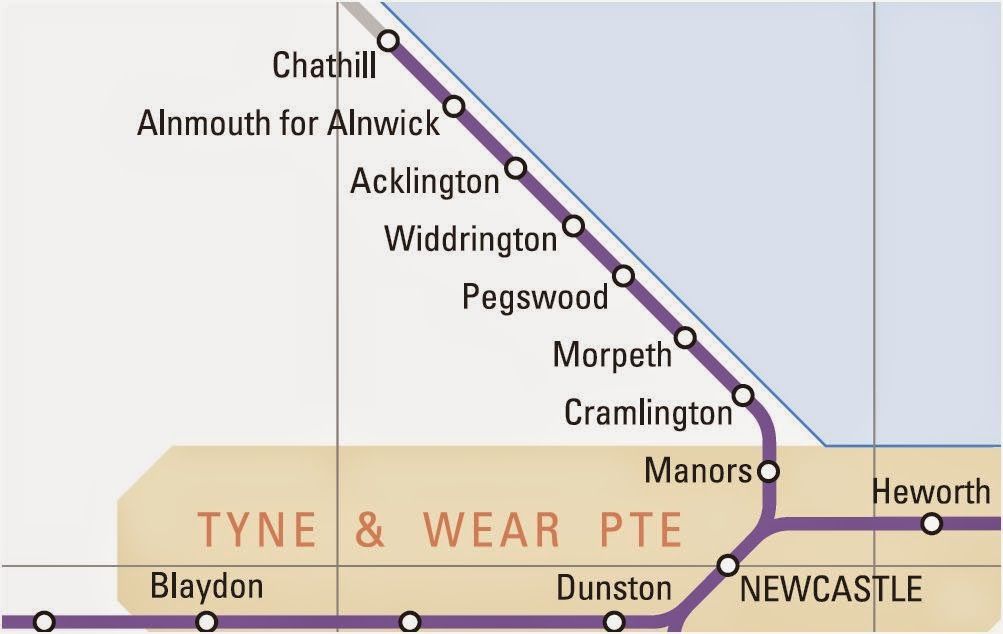 I put a line through the station name on the Northern Rail map I carry around in my head.  If I achieved nothing else that day, I'd done this, one of the most obscure, most difficult to reach stations.  Job done. 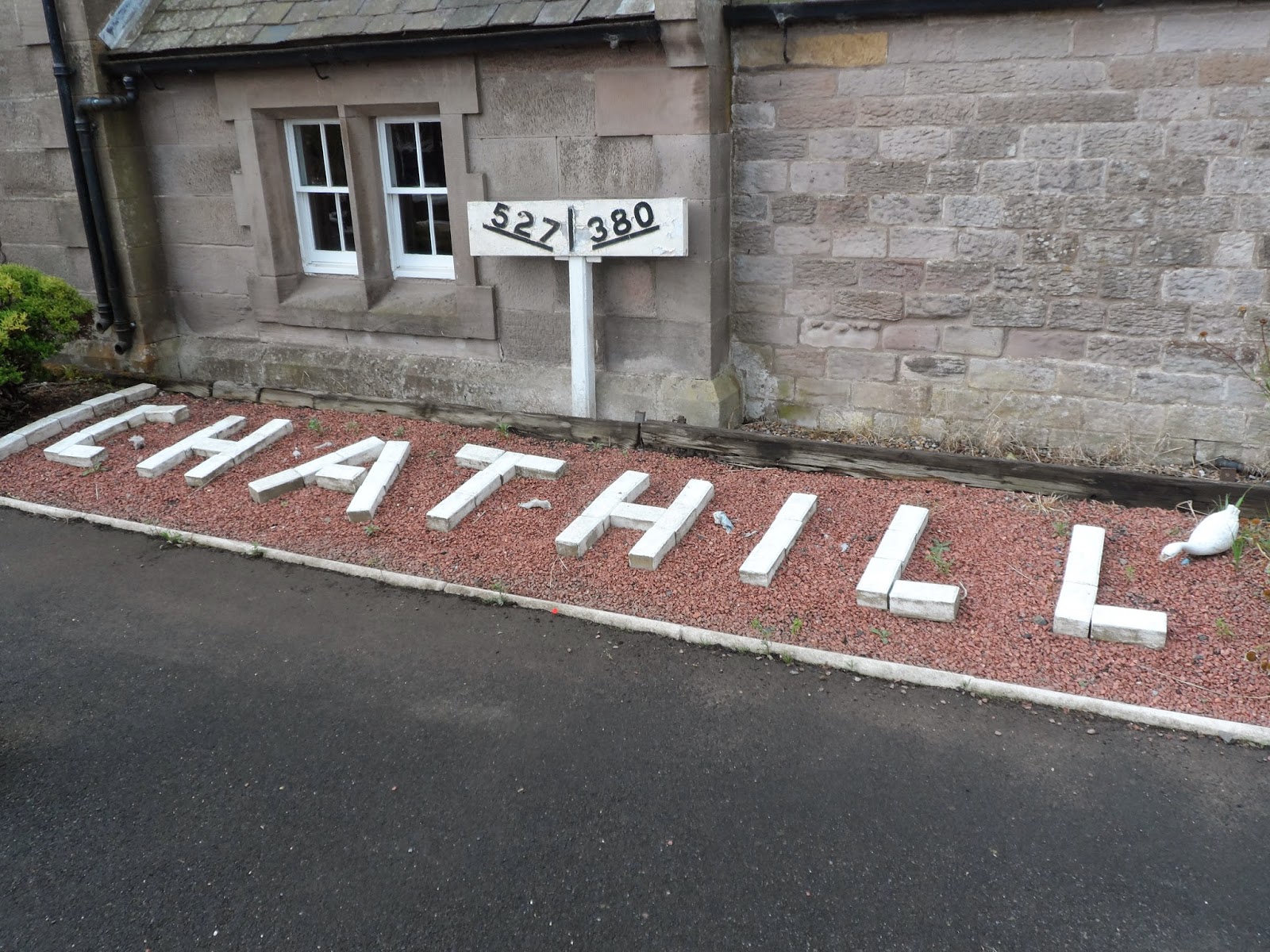 The station building is a private house now, of course.  I tiptoed by and out onto the road, not wanting to make any noise at such an early hour.  I crossed over to the southbound platform to have a look in the shelter.  Normally these quiet stations have nothing much in the way of facilities - you're lucky if you get a seat - but Chathill has a proper shelter, with a heavy sliding door to stop the birds from nesting inside. 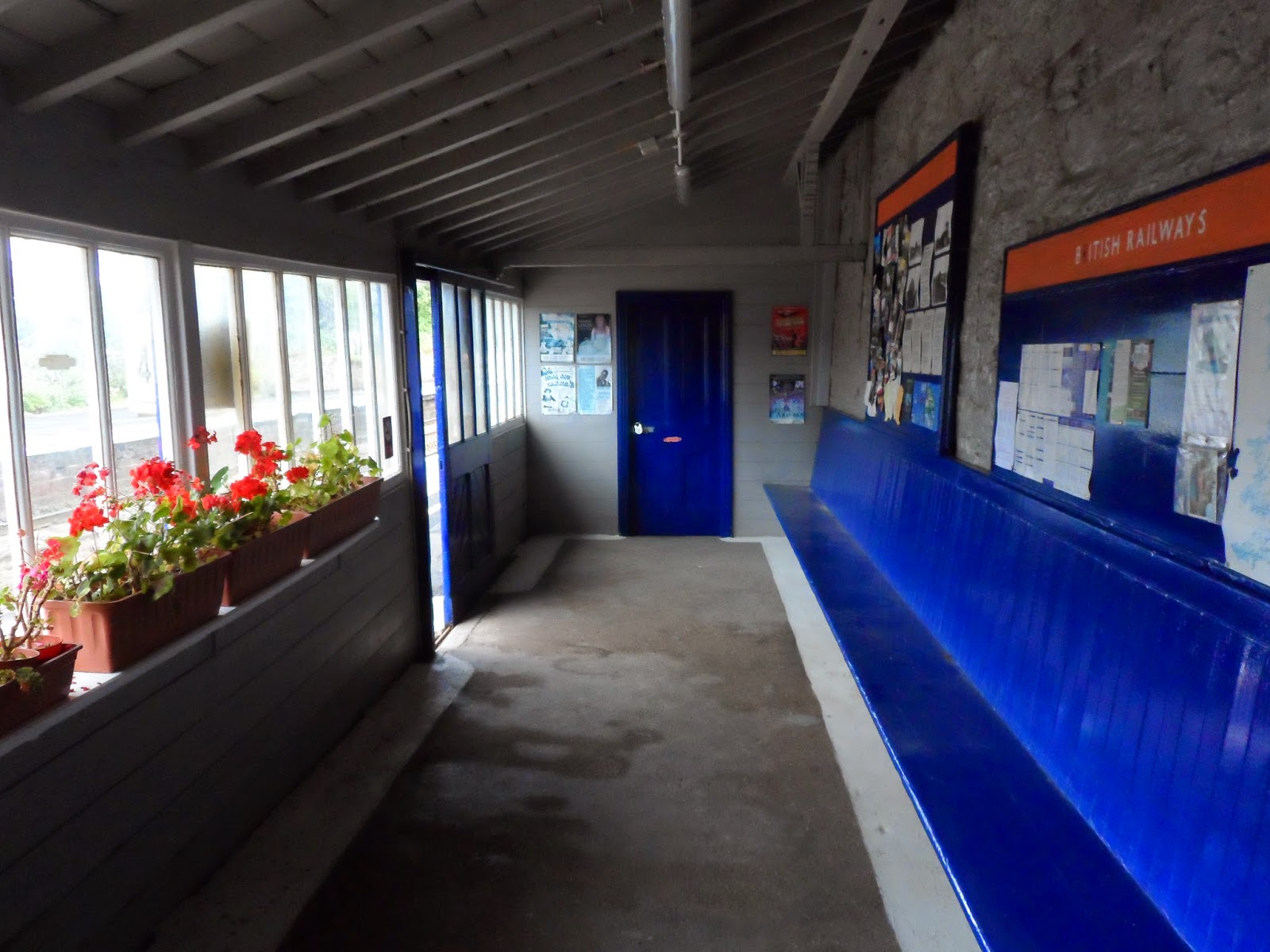 Inside, the locals had put up British Railways noticeboards and filled them with pamphlets for local attractions.  There was a history of the line and the station, and a small book exchange (mostly historical romances).  And there were postcards.  Robert visited the station a couple of months ago, and so I was forewarned that I could buy a souvenir of my visit; there were only two left in the plastic wallet.  I put some coins into the envelope and crossed back to the house ("drop it through the letterbox"). 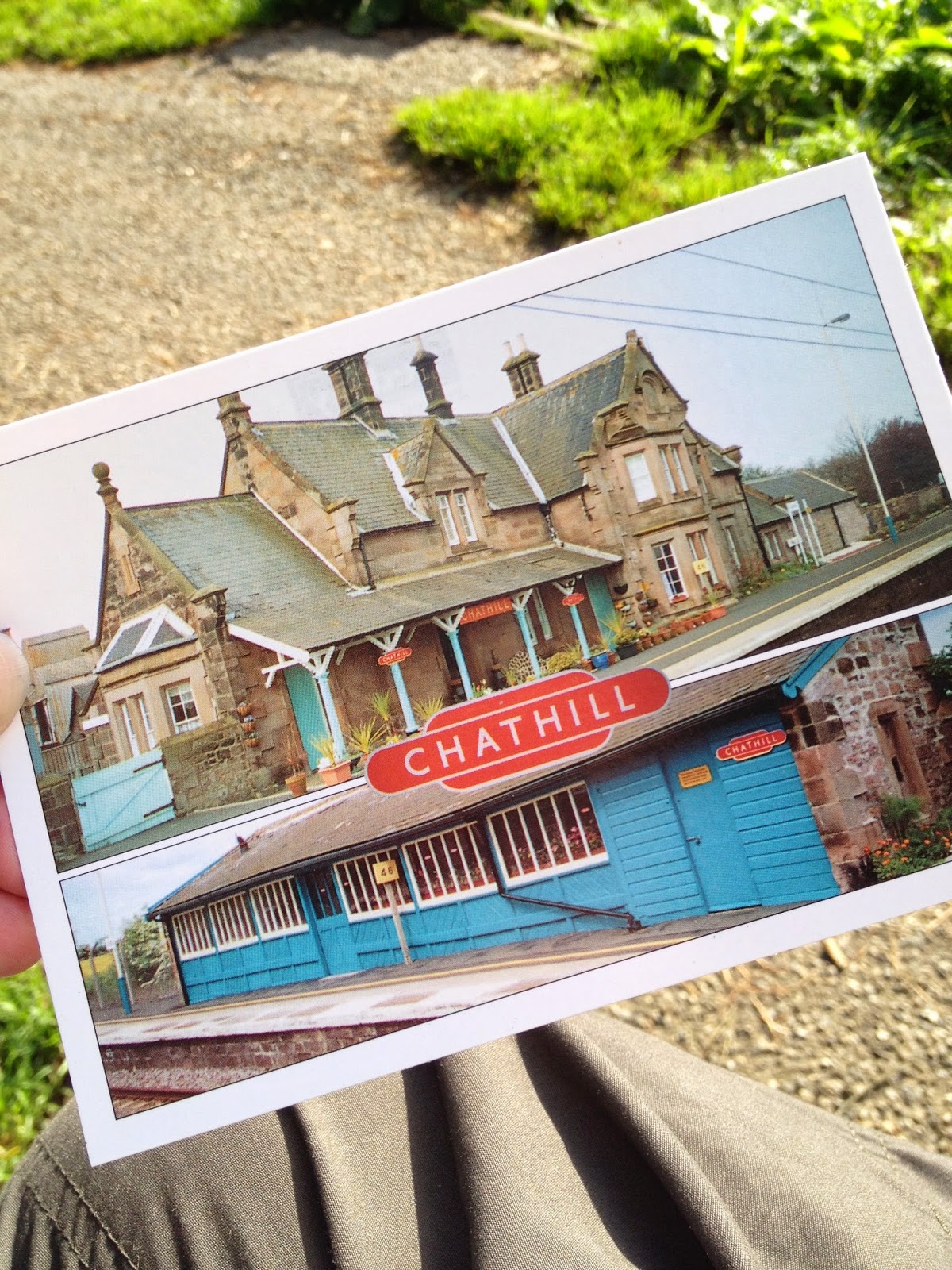 There was a train back into Newcastle in a few minutes; I say "a train", it was the one I'd come on.  I wasn't getting it.  I'd decided to walk to the next station along the line, just twenty miles or so away.  Surely it couldn't be that hard? 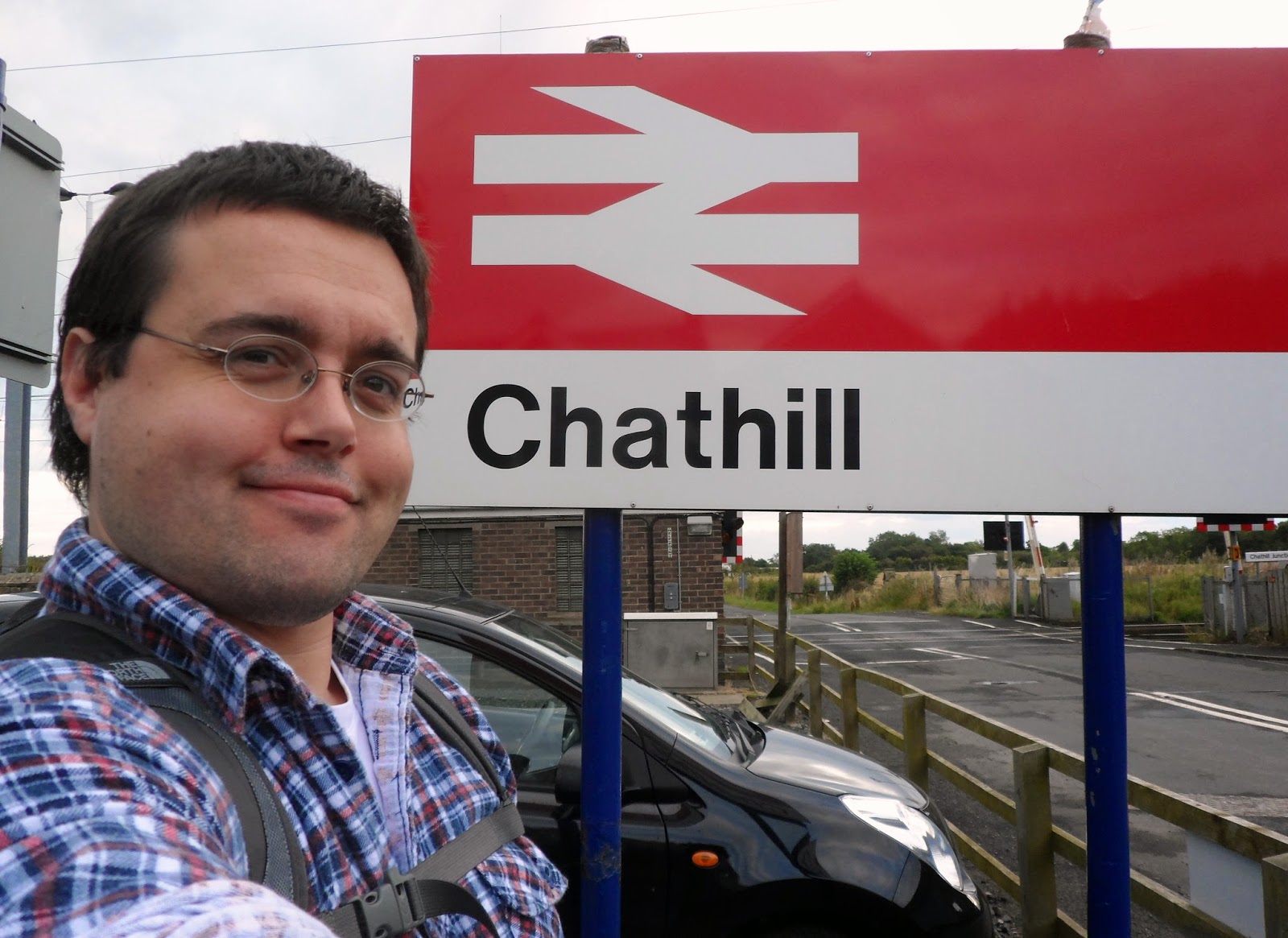 Last (and only) time I've been at Newcastle when there were no trains was in my student days and after midnight. I needed to get back to Durham after seeing some gig at the long gone Riverside (probably the Super Furry Animals supported by Gomez if memory server)

It was a cold and bitter night, and the train (Northern Spirit!) wasn't until half one. We went to take shelter, but at half midnight, what should happen? Well the BTP turn up and start turfing everyone out before gleefully locking the station doors. Always struck me as exceedingly mean, and rather perverse that the BTP took such pleasure in doing it. Would it have done any harm to have a waiting area, available to ticket holders?

We later found out that there was a very handy and convenient bus that went at about half twelve. Funnily enough there's no train in the early hours any more either.

Pointless anecdote I know, but it's the image I always have for empty stations in the wee small hours.