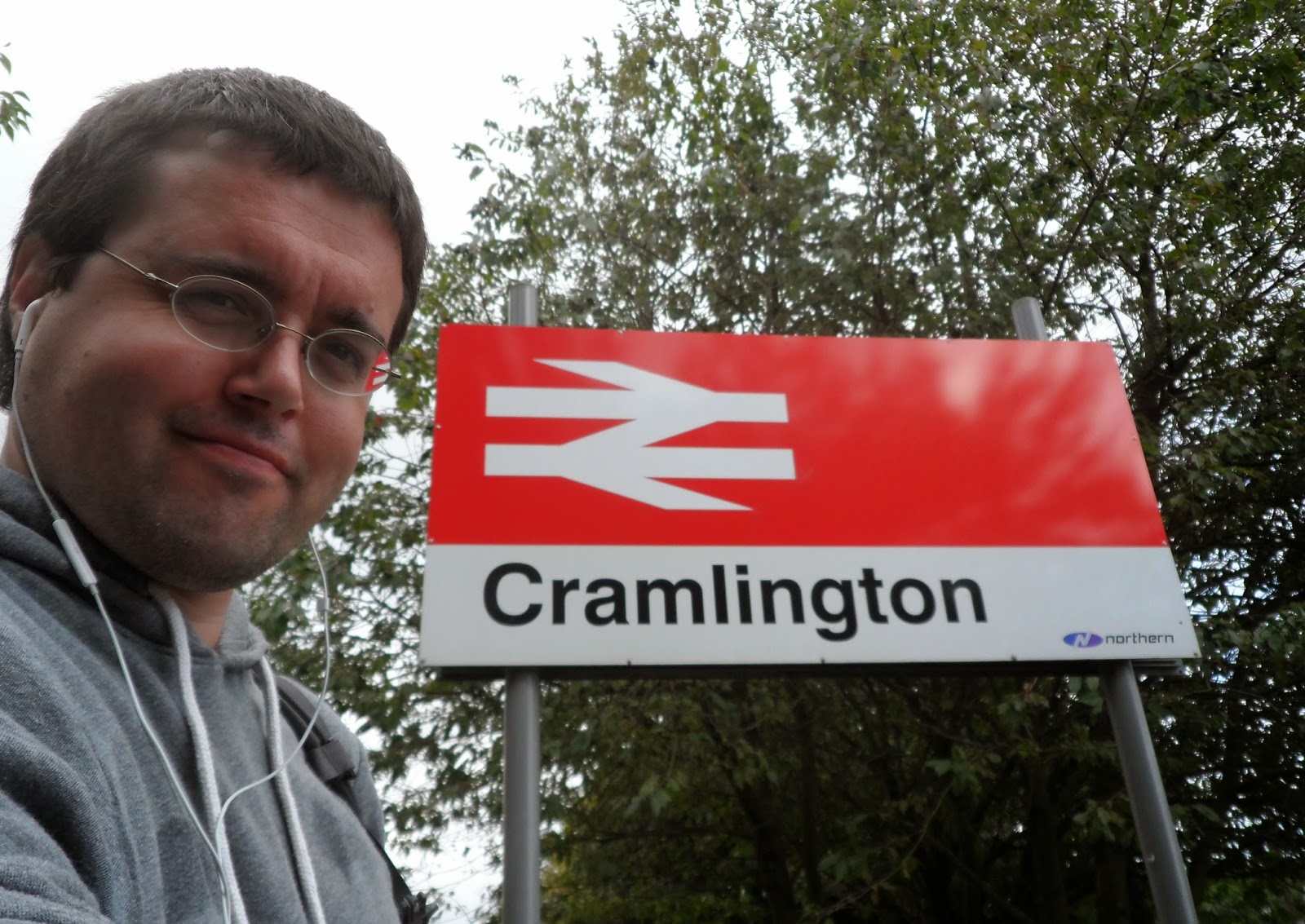 I have to apologise to Cramlington.  I was keen as mustard to have a look round the town before I arrived.  It's a New Town, developed in the 1960s for Newcastle's residents, and New Towns are always interesting.

Unfortunately, as I got off the train, my phone rang.  It was the BF, calling to let me know that he had arrived in Berlin.  (Yes, while I was trekking around the North East he was gallivanting in the German capital for a week with his mate Peter.  No, it isn't fair, is it?).  Normally this would just be a brief phone call, but it turned out that his EasyJet flight had some interesting passengers - namely, the British diving team.

If you're not aware, the diving has a significant... following among the homosexual community.  I'm not sure what appeals to the gays about well-toned men in Speedos performing acrobatic feats while leaping from brave heights, then emerging dripping wet from the water - perhaps it's an appreciation for swimming pool architecture.  All I know is that we were glued to the men's diving during the Commonwealth Games and the Olympics, while completely ignoring, say, the Track and Field events.

The sight of half a dozen of our nation's finest divers sent the BF into raptures.  He launched into a lengthy monologue about who he saw, how they were dressed, how Chris Mears was asleep, how Jack Laugher was listening to his iPod, how he pretended to go to the loo just so he could get a better look... Basically he sounded like a twelve year old girl who's just spotted Harry Styles in the corner shop.

(Before you ask, no, Tom Daley wasn't with them, and no, I'm not really a fan of Team GB's divers.  I'm much more of a Vincent Riendeau from Canada fan). 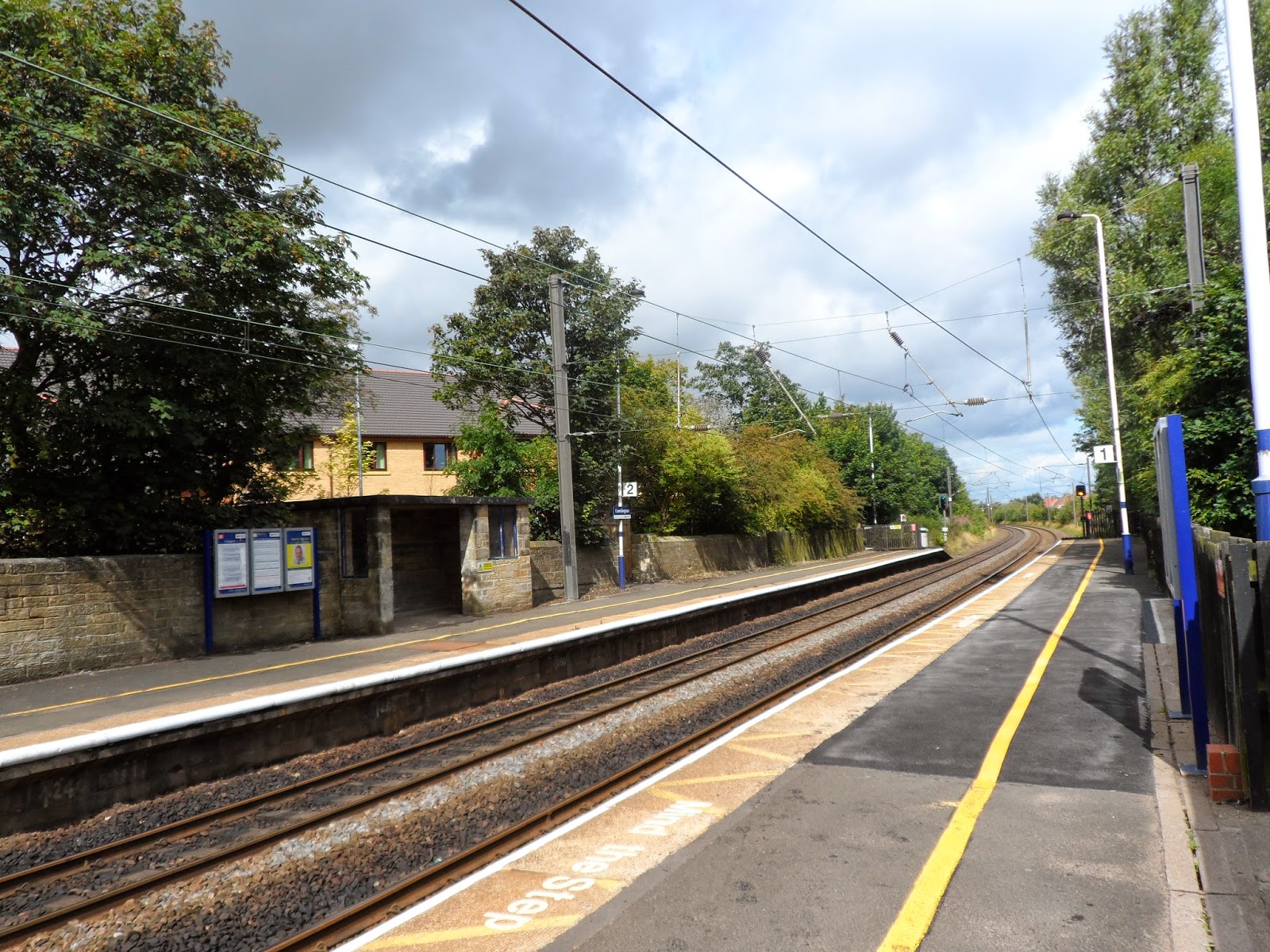 Anyway, twenty minutes later he finally got off the phone (presumably to write Mrs James Denny over and over on his pencil case) and I was left with a conundrum.  Walk into the town, and not give it my full attention so I could be back in time for the next train, or just hang around the station. 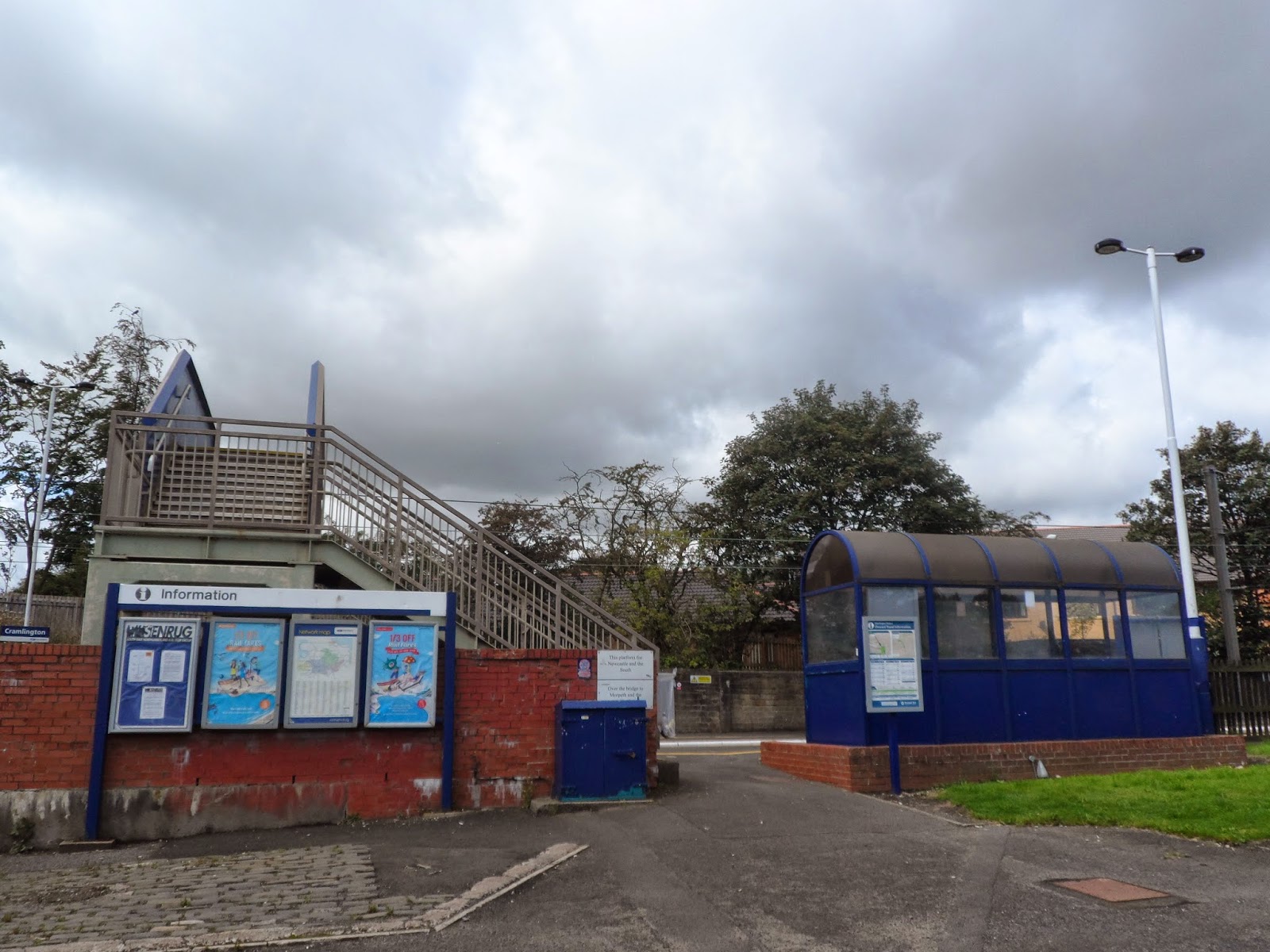 I hung around the station.  Sorry Cramlington.  I'm sure you're lovely, but I fancied a bit of a sit down and a drink (my legs were still protesting after the previous day's walk).  I took up a position on the platform and waited for the train to take me to my next station.

Manors suffers from the same affliction as Edge Hill in Liverpool and Ardwick in Manchester.  It's just a little bit too close to the main city terminus to be useful.  By the time you've worked your way to the station, waited for your train, and then got out of Newcastle Central, you could be halfway into the city centre on the bus.  Or you could even walk it. 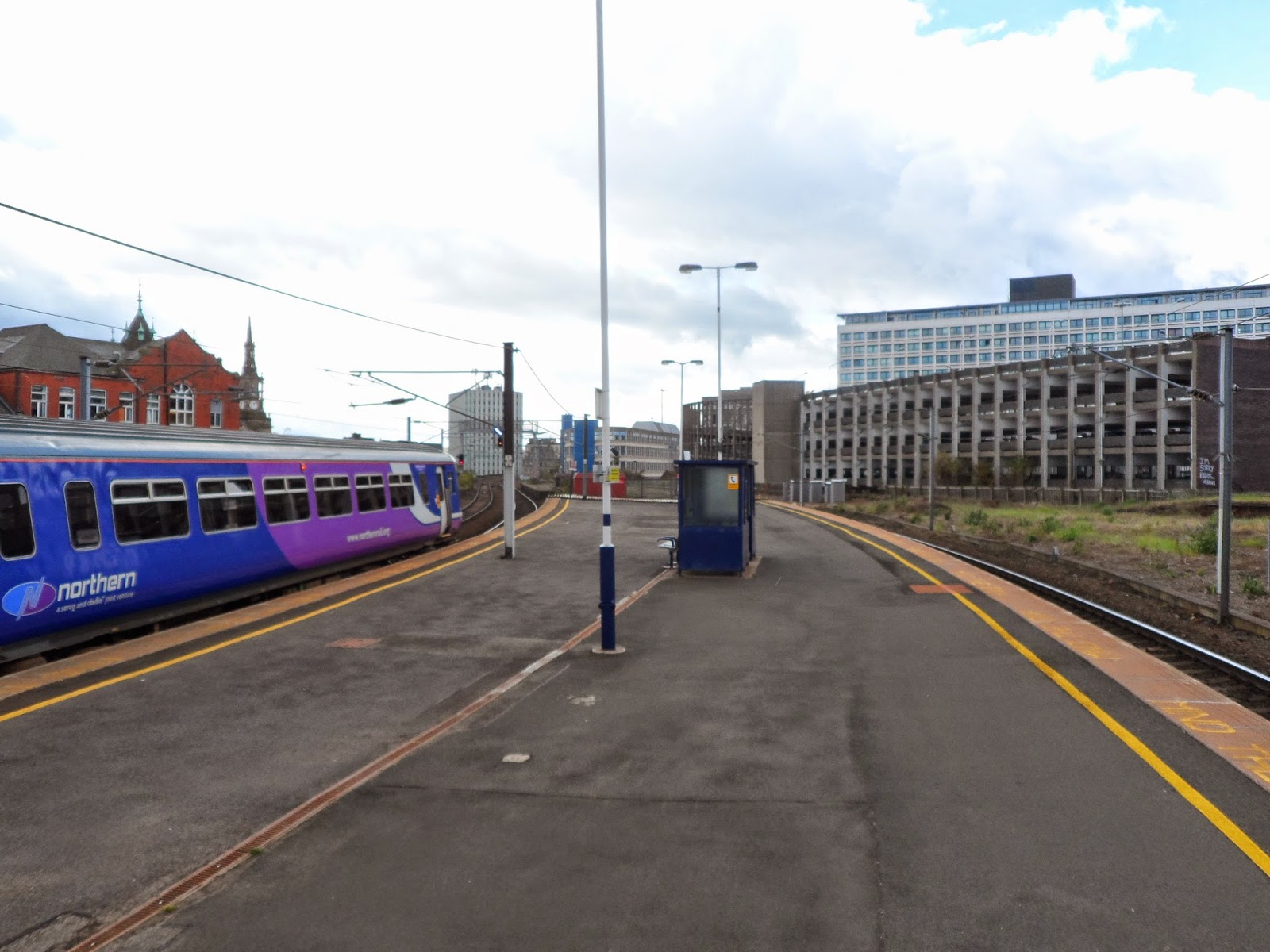 It leaves Manors with a desolate, unloved feel.  It's an island between the tracks, with a multi-storey car park on one side and the backs of some apartments on the other.  There's no lift for the disabled, because what would be the point?  Just a metal footbridge to clatter over to the main entrance: a gate behind a 1980s business park. 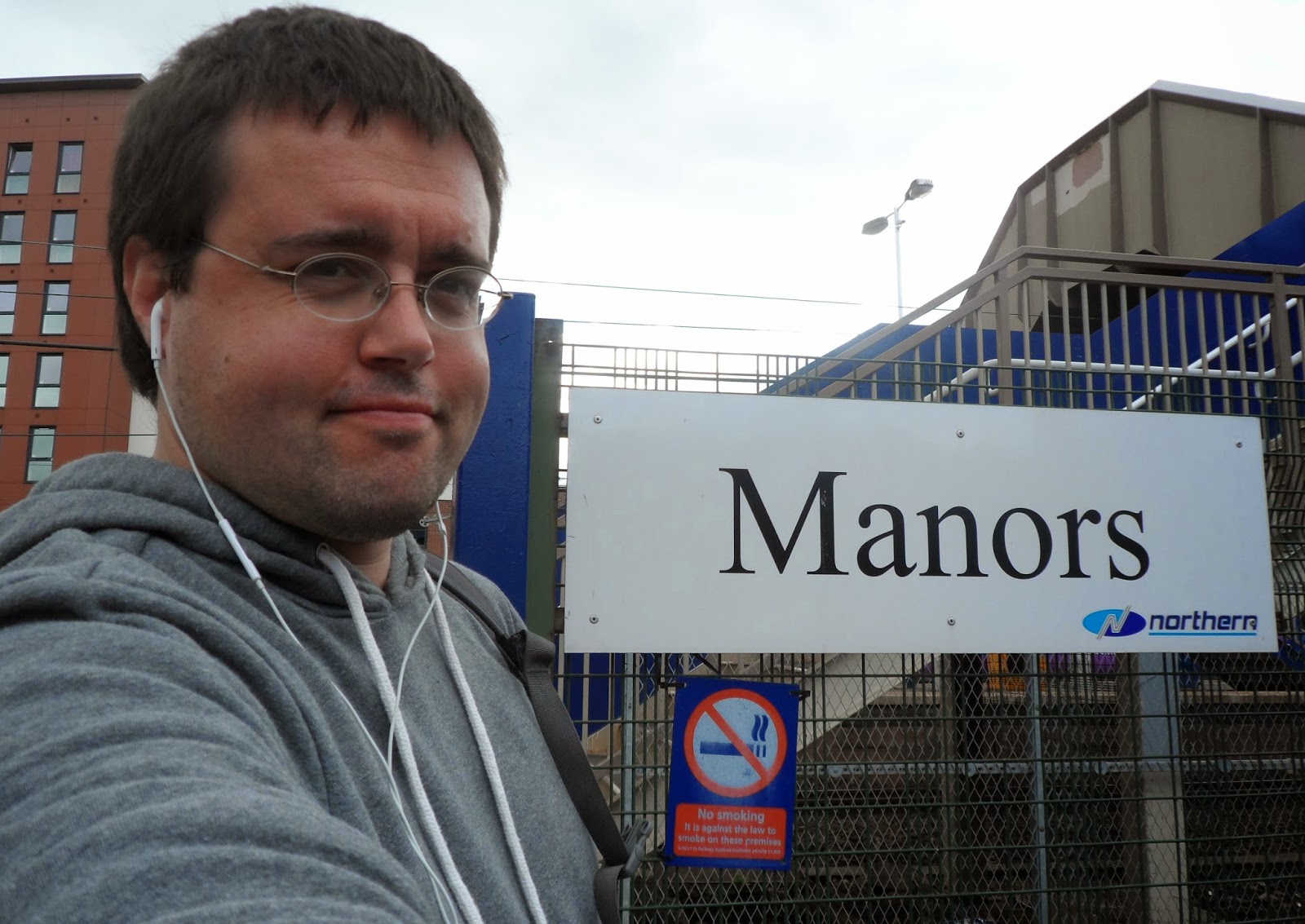 More of that terrible signage as well.

Another reason for Manors' relative quiet is that there's a Tyne & Wear Metro station a two minute walk away.  Theoretically this should be an ideal interchange spot; in reality, anyone in the area just uses the Metro because that goes to far more useful places than the train. Obviously I was ecstatic at the opportunity to ride the Metro again.  It's a brilliant network, all fast, efficient trains and lovely underground stations and that gorgeous Calvert font.  Manors is underground, with a pleasingly clean and spacious ticket hall leading down to two platforms. 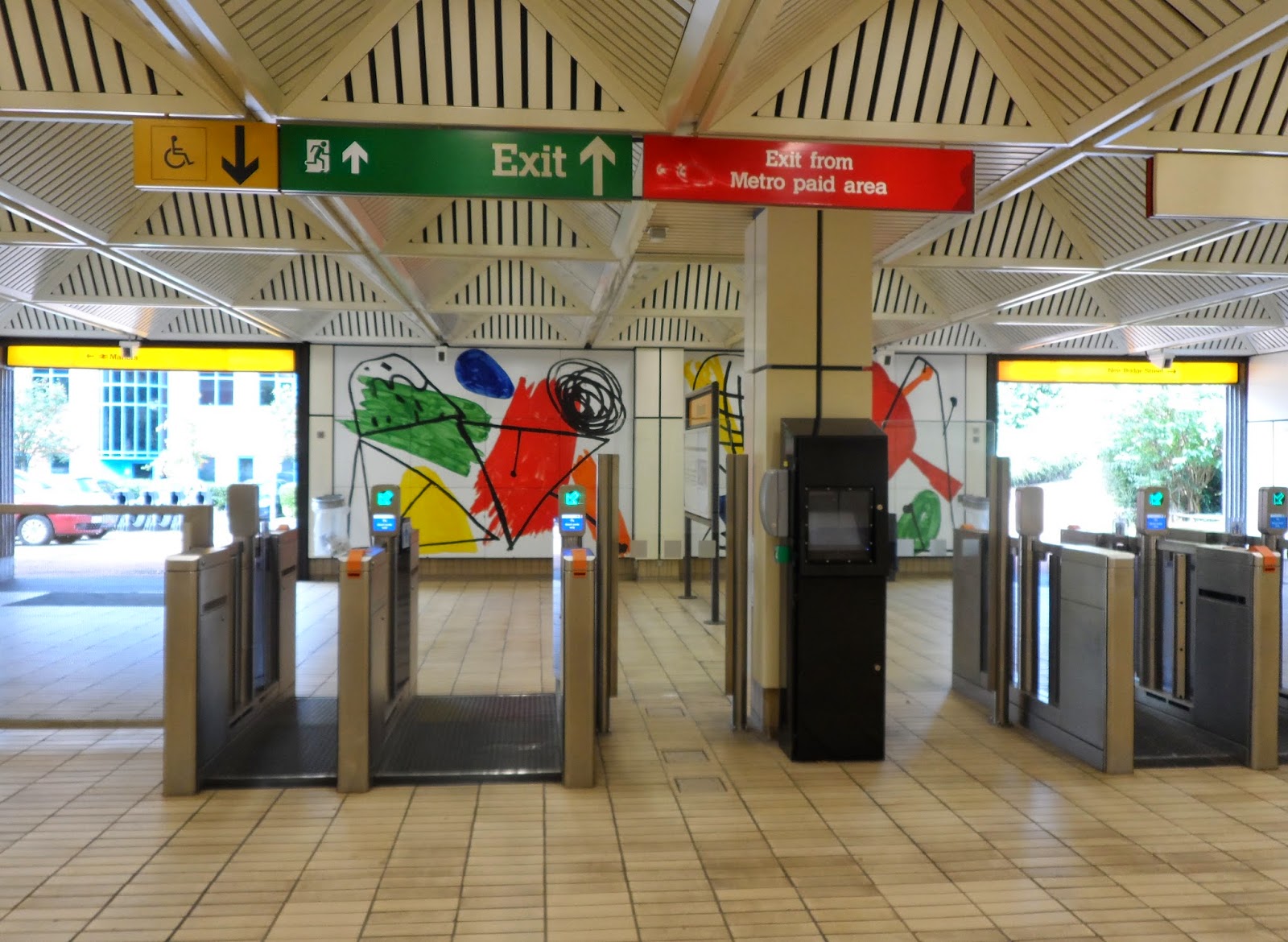 Part of me wanted to just lark around on the Metro for the rest of the day.  I have a feeling that someday I'll have to come back for round the Metro we go.  It's just too tempting, especially now there are direct Newcastle trains from Liverpool every hour.  I doubt it would take too long to do either. 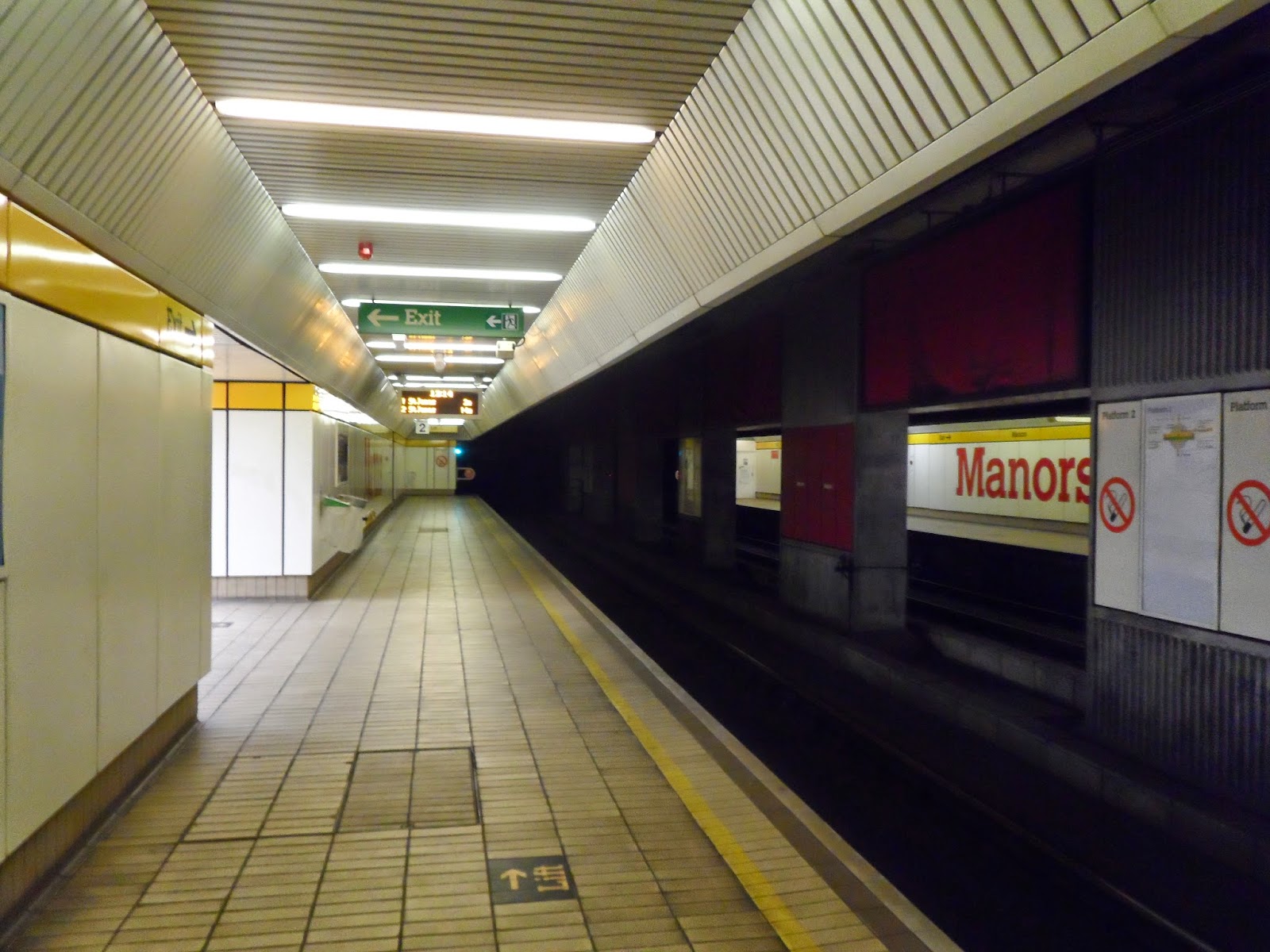 There were two side platforms with the tracks running inbetween; an unusual arrangement in the UK, where we tend to prefer separate tunnels for each underground track.  It reminded me of stations in Barcelona, which have a similar layout. 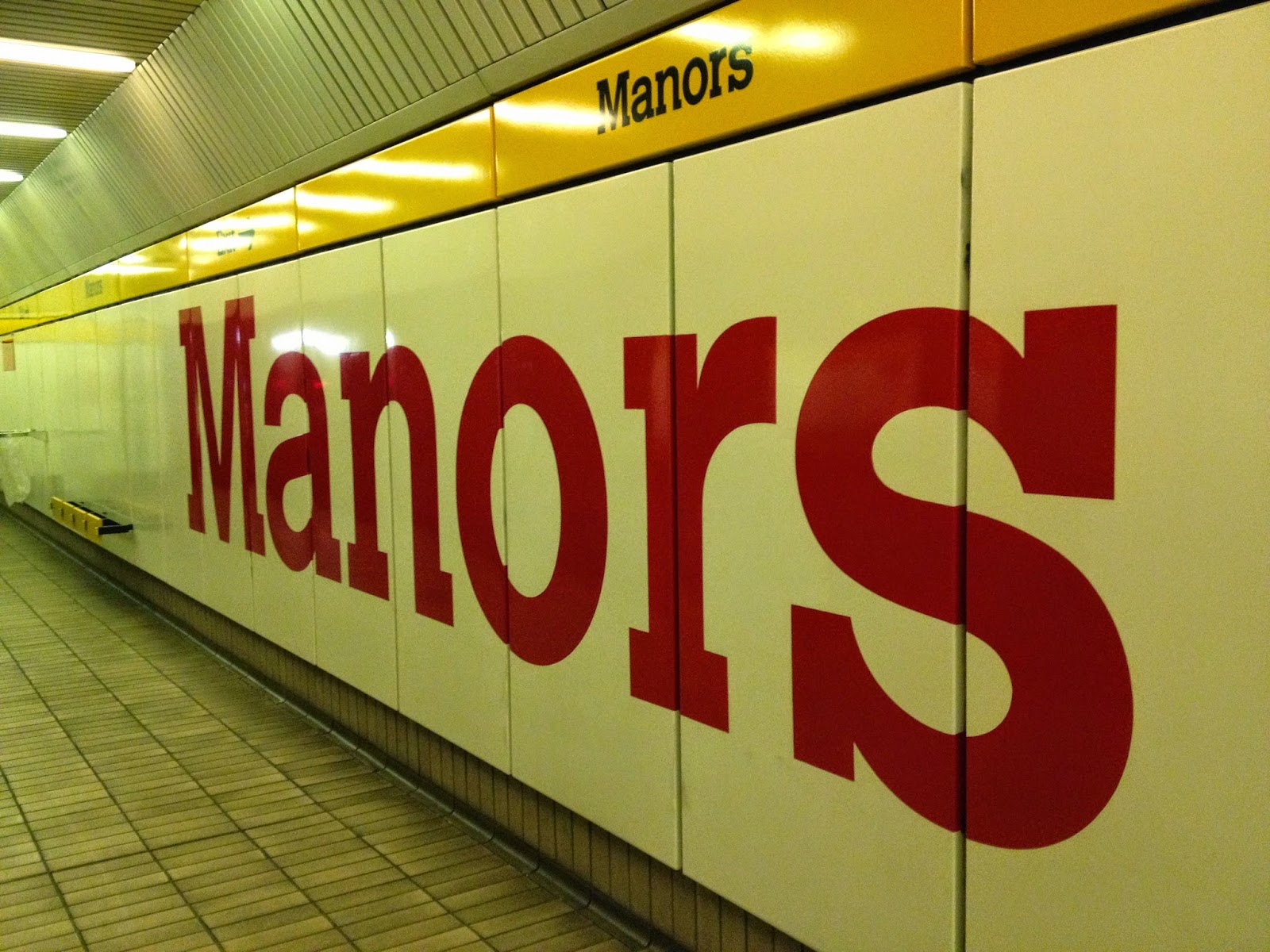 The only thing that stopped me from riding the Metro all afternoon was that I was incredibly tired.  I'm used to having a bit of a nap in the afternoon - this is a depression side effect, sadly - and combined with the 20 mile walk the day before my body was in full on protest mode.  I changed at Monument and got the train to Newcastle Central, where I could find my hotel and have a bit of a kip. 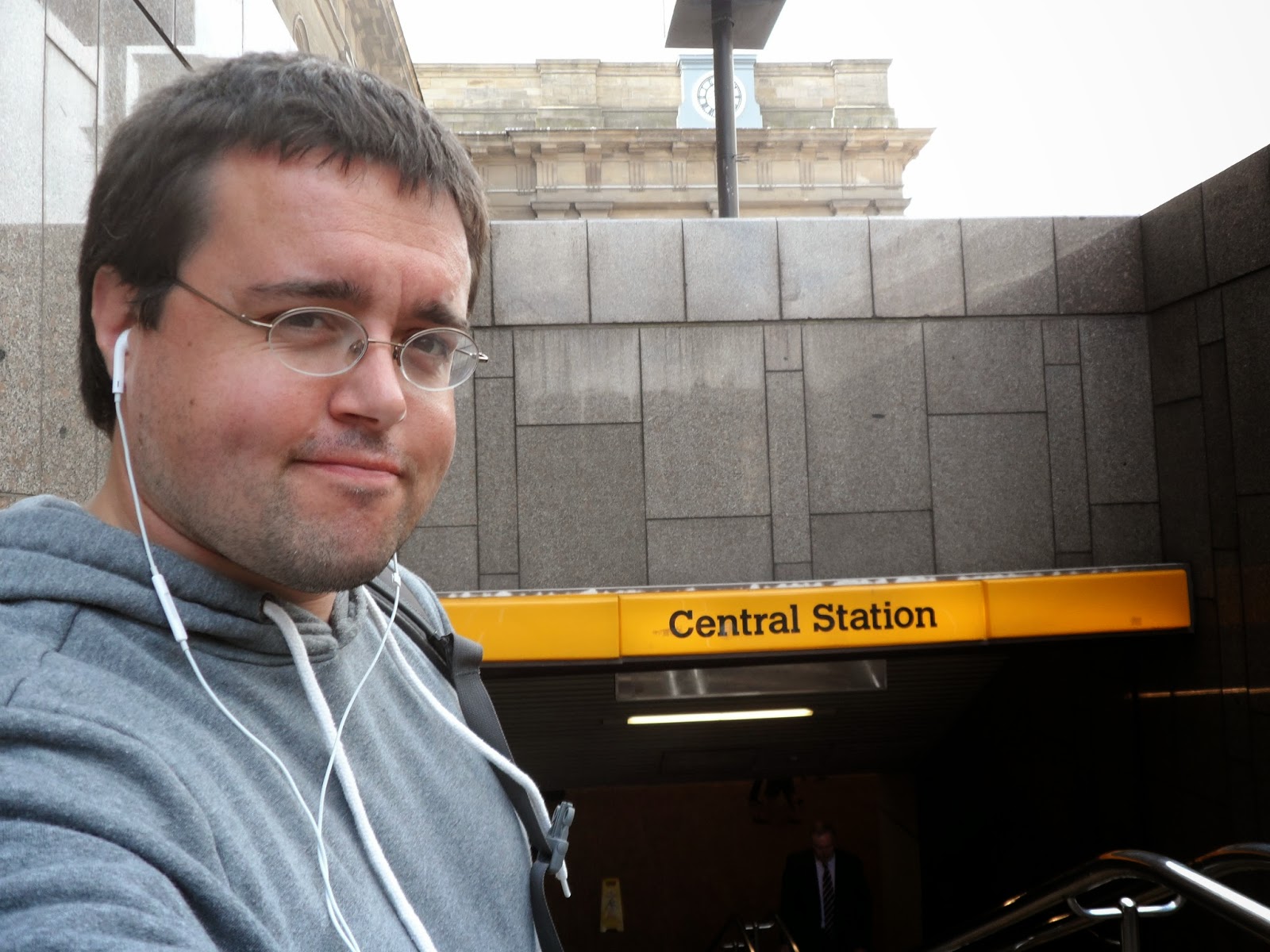 Observant readers will have noticed that in all this time I haven't actually collected Newcastle Central mainline yet.  I've been through it a few times but I haven't waxed lyrical about it.  This is because it's been undergoing significant refurbishment works all the times I've visited.  They're nearly done now, but the street outside is still a mess and some of the retail is all over the place, so I decided to leave it for another day.  I need to come back some time to collect Blaydon, anyway, the only other Tyne & Wear station I haven't yet been to.

If you're the kind of person who likes reading transport related blogs - and if you're reading this, you probably are - you'll have also read Robert's Station Master blog.  He's trying to visit some of the more obscure and poorly served stations on the network, and as part of that, he visited the Chathill line.  He even asked me along, but when I suggested walking between stations, he turned pale and said perhaps it would be better if he went on his own.

This lead to a certain amount of competition between us.  Admittedly it was mainly on my part; I can't bear to be second (or first loser) at anything.  We'd both visited the same stations, we'd even stayed in the same hotel, so there was a little bit of rivalry about who would have the best time.  It didn't help that he sent me texts like the one below: 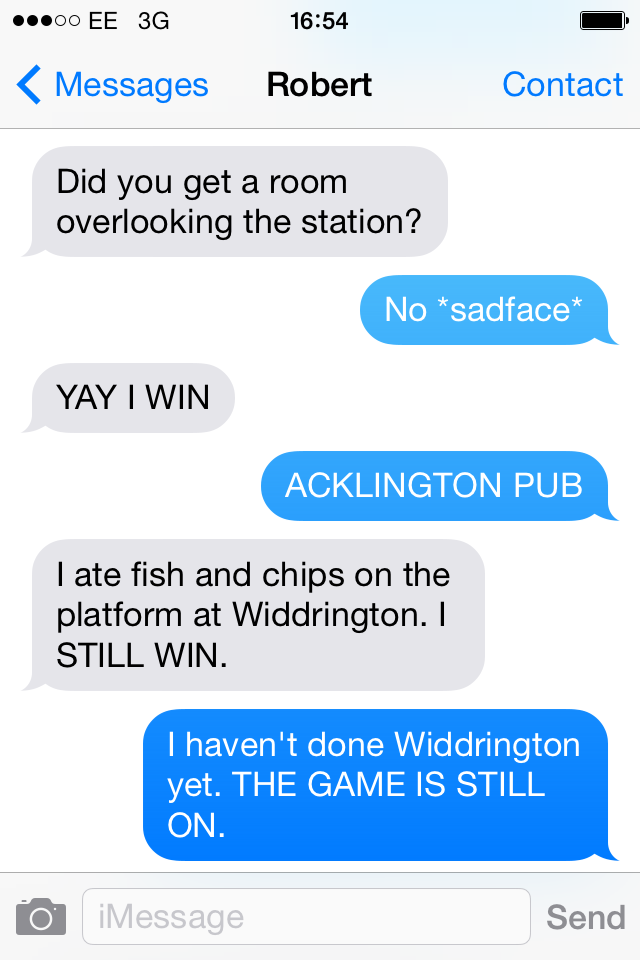 So if you're keeping score, Robert got a room with a view of the station, but was in Acklington too early to visit the pub.  I had a view of the street outside my hotel room, but I got to have a couple of pints in the Railway at Acklington.  A draw.  Possibly.  Personally I think being able to drink alcohol is worth five points at least.

That text meant that I had to do one thing at Widdrington, and one thing only: eat chips on the platform.  I got up from my nap and dashed over to the platform for my train.  It was - for the first and only time - busy.  Finally I saw the point of the service to Chathill.  It was full of commuters on their way home, plus a smattering of bored teenagers finding ways to kill time during the holidays.  People were actually standing. 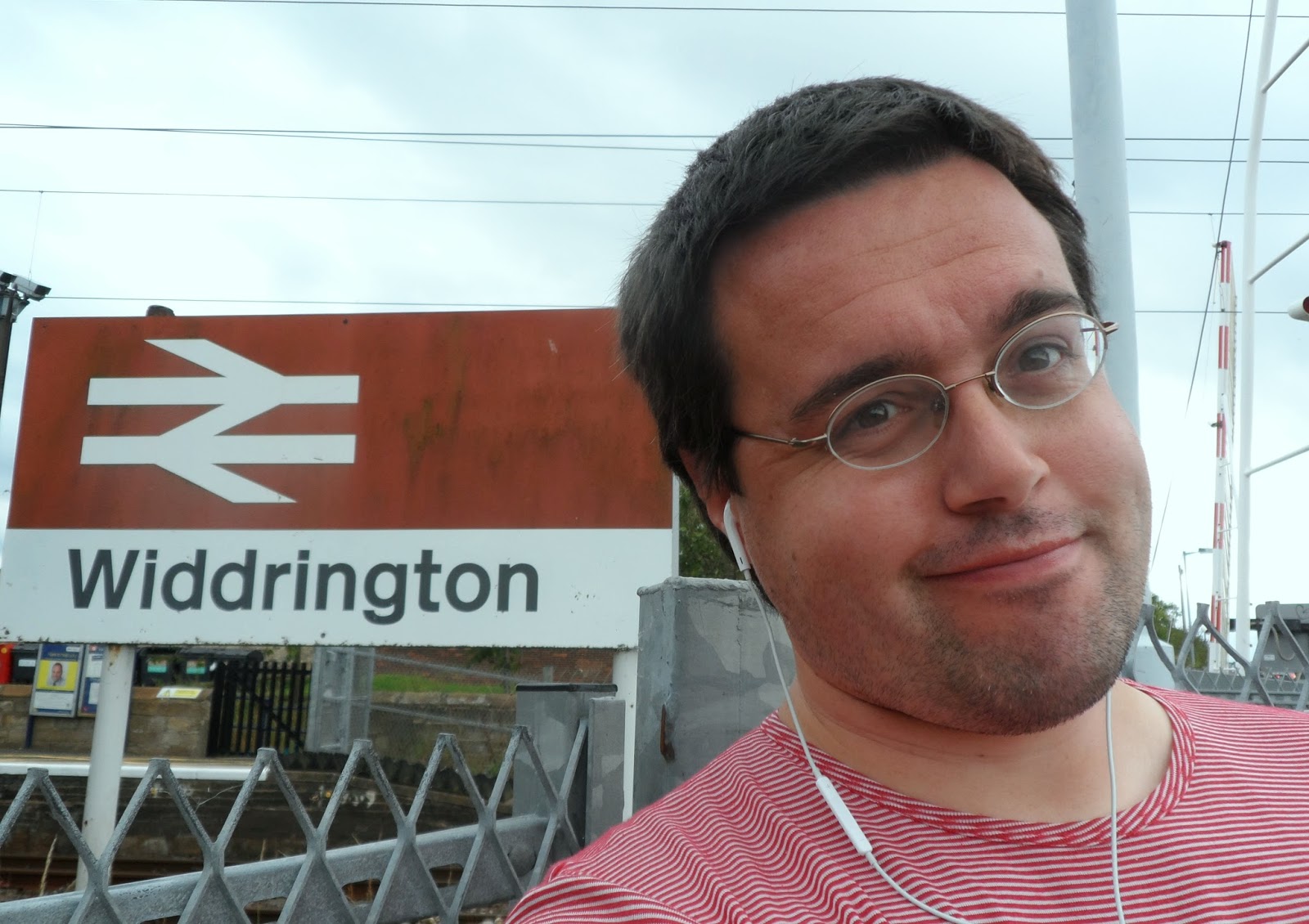 At Morpeth, though, most of them cleared out.  The jammed train became distinctly deserted.  Only a couple of us alighted at Widdrington; I should imagine the rest were waiting for Alnmouth.  I headed immediately for the chip shop - or, to use its proper name, The Widdy Chippy. 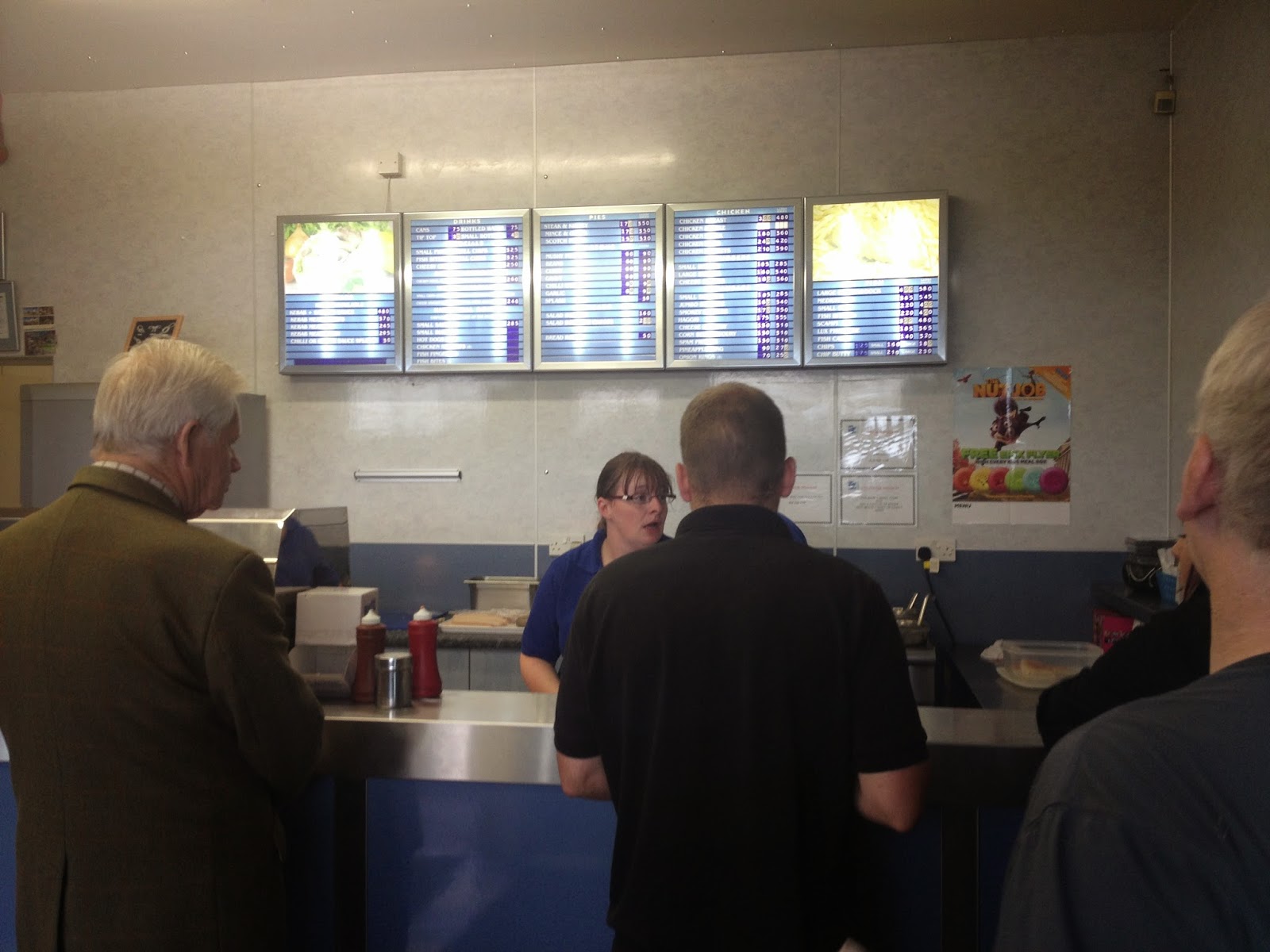 It was a real, proper working class chippy; there was none of that pretentious food you get in some other places.  My local chip shop offers curry, chinese, kebabs; the Widdy had spam fritters on its menu and that was about as exotic as it got.  The drinks were bottles of Tip Top and there was a Kid's Special Snack Box with a free frisbee (sorry, "flying disc").  It was packed.  A constant stream of punters came in for their Friday night tea.

I decided not to go with the fish, and instead ordered a battered sausage, onion rings and chips.  A few minutes later, with a smattering of salt, I was on the platform.  Obviously I texted this victory to Robert. 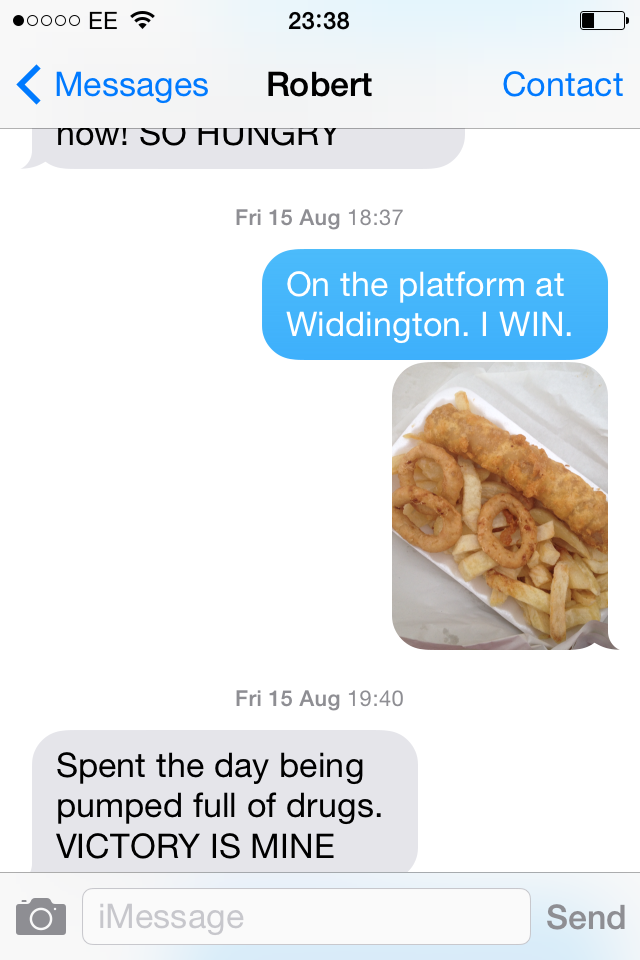 (He's not a smackhead, by the way; he'd just had wisdom teeth removed).

The chips were gorgeous; soft, fluffy, with a deliciously tempered batter.  The onion rings crunched satisfactorily.  The battered sausage was something else.  The batter was fine, but when you bit into the centre, it wasn't really a sausage at its heart; it was more a soft, slightly cold collection of mashed pink stuff.  It wasn't tightly packed inside the sausage skin and flopped onto the tongue.  I couldn't eat it.  I took a couple of bites and then it went into the bin with the polystyrene tray and the scrag ends.

I had a bit of a wander round the immediate vicinity of the station.  The chip shop was housed in a parade of turn of the century stores, next to a Co-op and round the corner from an Indian takeaway.  Behind it was a wide recreation ground which was, for some reason, Stones of Blood themed.  I'm sure it made sense to the playground designers to lay out a space for a pagan stone circle, but I'm not entirely on board with their logic. 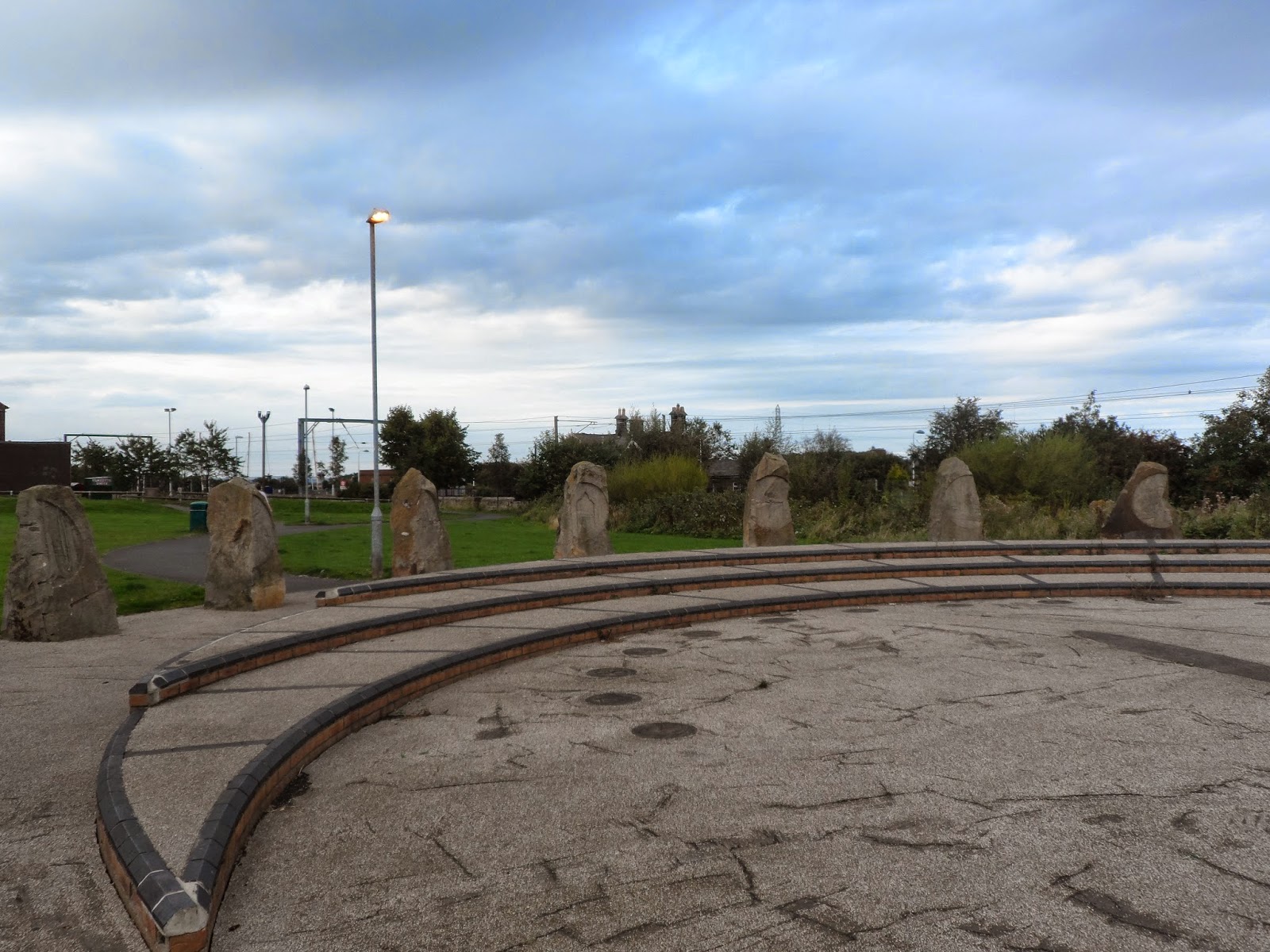 As I stood, bemused, a woman appeared at the gate of her house overlooking the recreation ground.  "Simon!  Tea!" she yelled, and a little blonde boy immediately detached himself from the group and legged it towards the house.  Meanwhile, a half dozen teenage girls appeared over the hill, stinking of perfume and over made up, and they took up position behind the bins at the back of the shop.  They were there for the rest of the evening, just hanging out, casting bitchy glances at passers by and sharing packets of crisps.  Friday night in a small town. 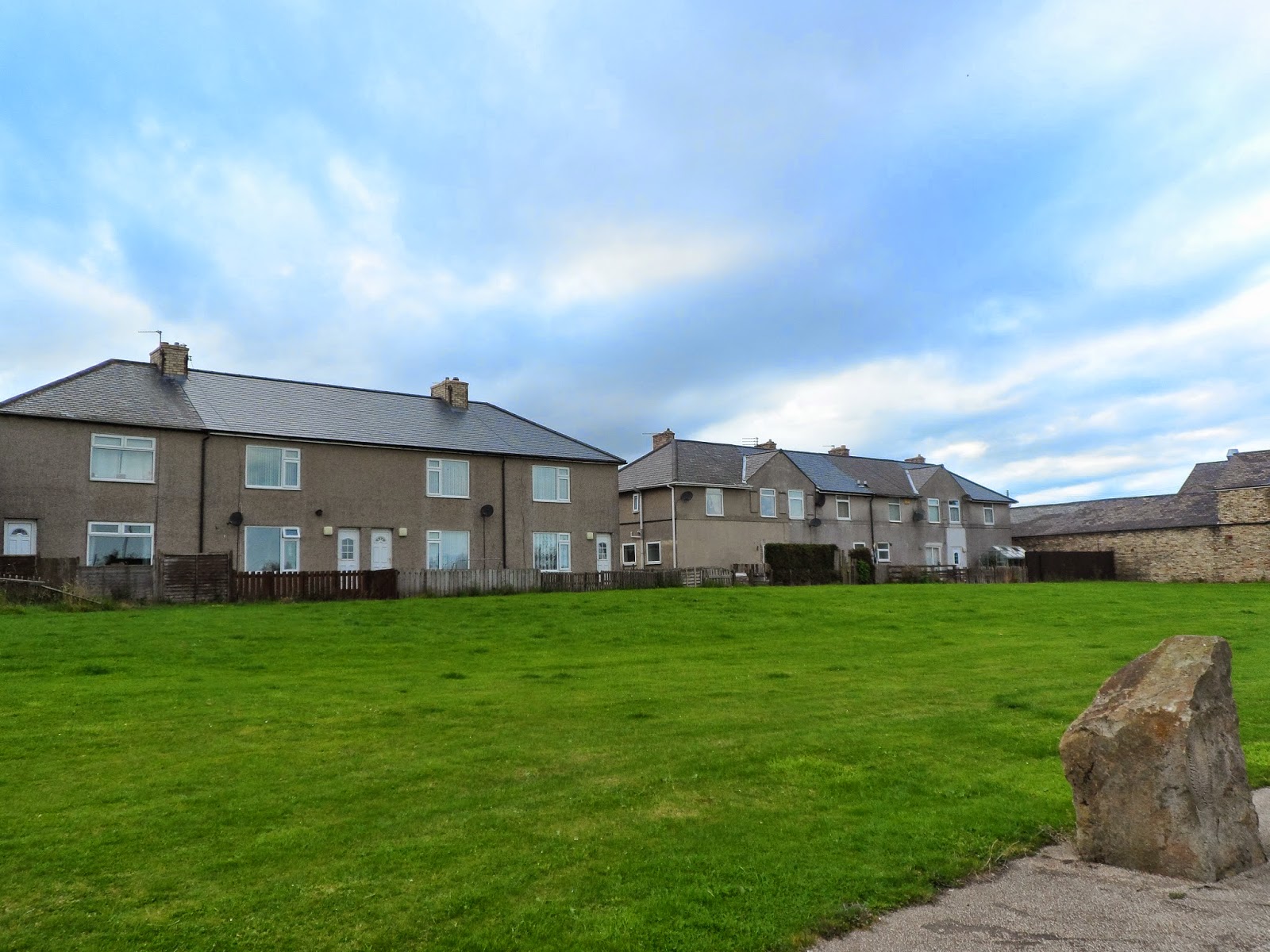 I headed back to the station.  The building's a private home again, and you can stare right down into their back yard from the platform.  I put on a podcast - Dennis Hensley chatting to a friend about Partridge Family 8-tracks - and waited for my train. 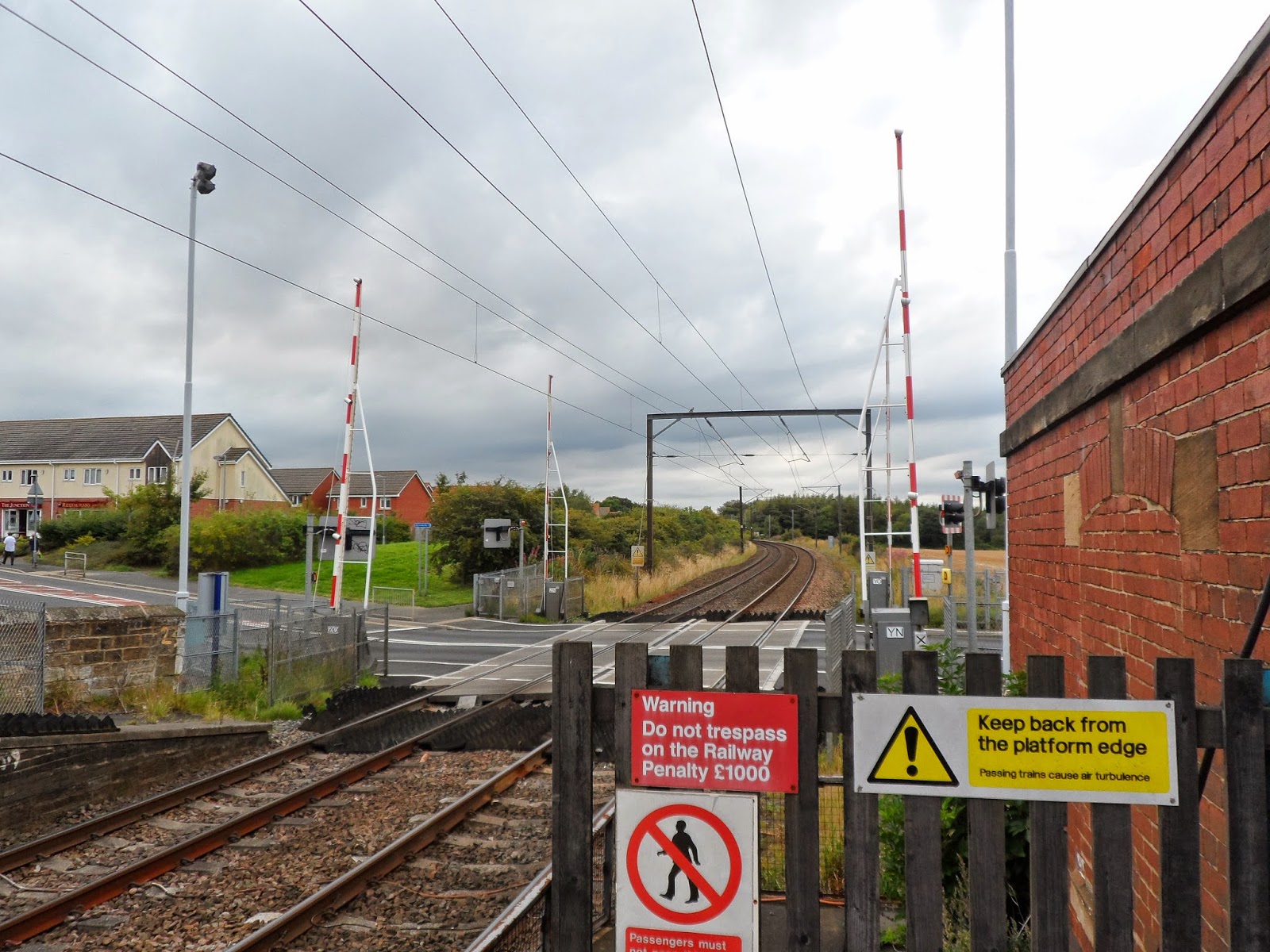 I'd done it, then.  The whole of the Chathill branch crossed off.  It was always going to be a challenge, I thought, but in reality, it was pretty simple.  A bit - alright, a lot - of walking.  A bit of hanging around.  It had been fun.  And most importantly, I did it better than Robert. If you like competition, then nerr nerr there's a proper (ish) sign at Manors. There's another exit near the multi-story car park that had the proper sign (though admittedly tied to a lamppost).

Whoops, that link was supposed to be clickable. Let's try that again Photo of me under the proper Manors sign

That is a rubbish sign for Manors. Better than the rubbish sign I stood in front of, I admit, but still rubbish.

You got those lyrics wrong, Robert.