I apologise.  If you're reading this, odds are you're not really interested in the World Cup, and you looked to this blog as a sanctuary.  Don't worry; I haven't decided to devote the next few weeks to Brazil 2014.  I hate it as much as you: possibly more.

I mean, you can probably escape it.  I, on the other hand, live with a die hard football fan.  For the next month or so the BF is basically not a human being any more.  He's this creature on the sofa, drinking shandies (he doesn't like pints - I know), shoving Tooty Frooties in his mouth and staring vacantly at the screen.  Then texting his friend Jack about who the fittest player on the pitch is, because while he might think being a footie fan makes him dead butch, he's still a massive poof at heart.

This is our fifth World Cup together, and to be fair to him, he's realised that I might need something to keep me entertained while I am effectively a single man.  A couple of months ago he delicately suggested that I might want to go on a trip while it was on.

I perked up.  "Well, I have heard of this men only sex cruise in the Phillipines, where they send a party boat into international waters where there are no laws and..."

"I was thinking more in terms of you doing one of your train trips."

After a few weeks of negotiating, where it was established that two weeks on the SS Eastern Decadence was definitely not on the cards, I cast my eye over the Northern Rail map in search of a suitable destination for another Epic Journey With Little Purpose. 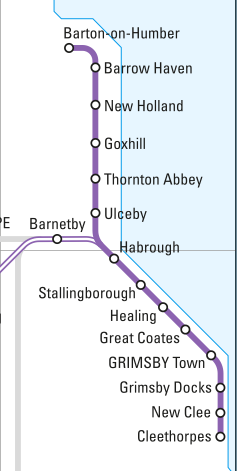 I settled for the Barton Line.  Running from the Humber Bridge down to Cleethorpes, it's an island of Northern Rail trains; its only connection with the rest of the map is via a Saturday only service through Gainsborough and a bunch of First TransPennine trains.  A single train travels up and down the line, which is single tracked in places, so actually staying in Grimsby would enable me to get as many stations as possible without having to factor in a cross country trip back to Liverpool.

Tickets are booked; a hotel room has been reserved; maps have been printed off.  I'll be away from Thursday to Sunday, fitting in a few other stations in the area if I can, and hopefully it'll be fun and interesting.  To be honest, I don't care; it's four days where I don't have to hear about goalless draws, and so it will be amazing.
Posted by Scott Willison at 13:41

You could have waited a couple of years and saved yourself a job - this line may be transferred to East Midlands Trains from 2016. :)

We look forward to it!