Day One: The Four-Letter Word 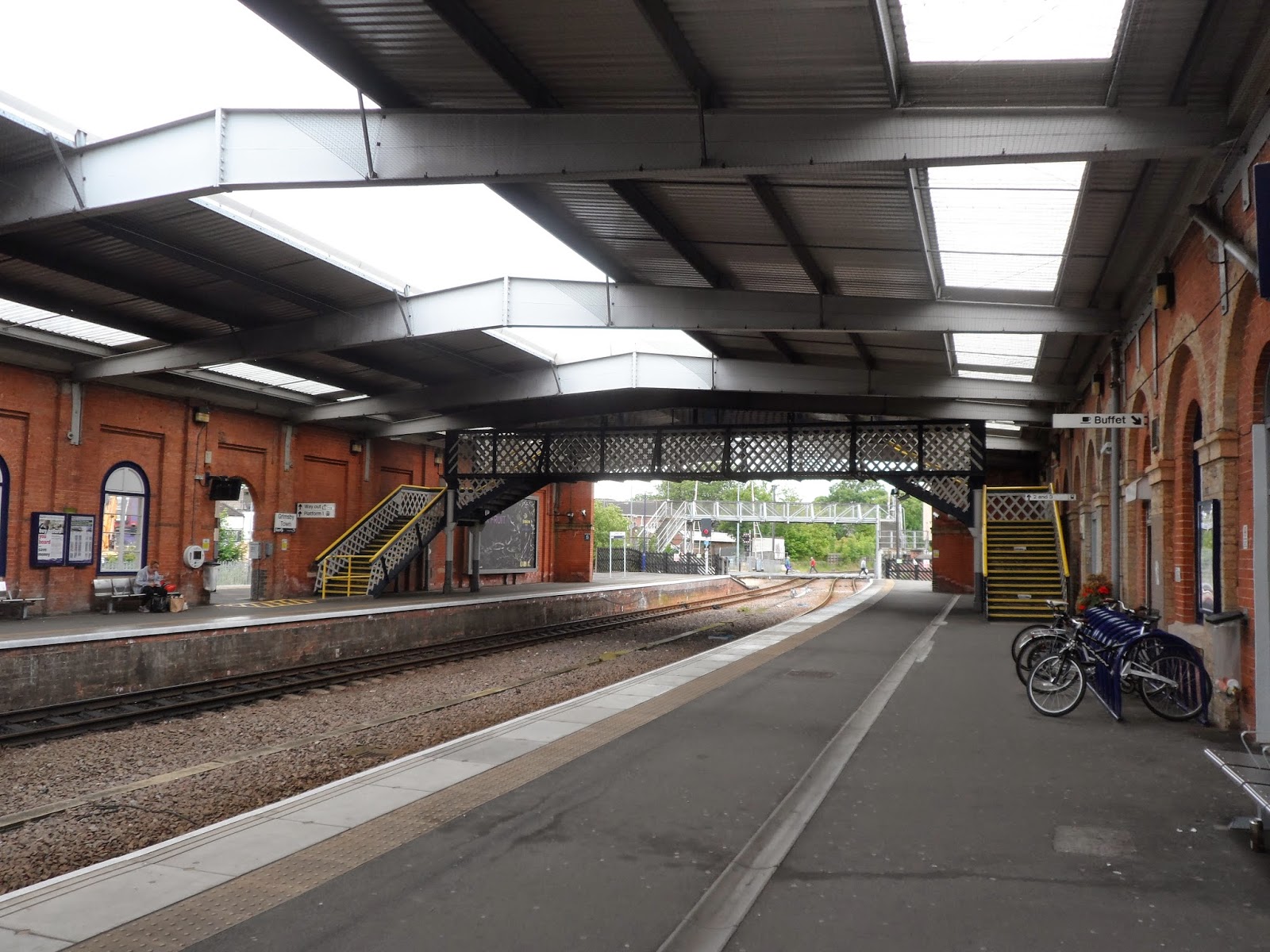 I arrived in Grimsby absolutely determined to do one thing: never, ever refer to it as "grim".  That was lazy and reductive.  Even if I found a smoking crater of a town, recently nuked by a rogue Russian missile and leaving on the railway station standing, I absolutely refused to use that four letter word.  Too easy.

Plus, Grimsby station was rather nice.  The two main platforms (a third hides to one side) are housed in a simple shed-like building, with lifts at one end and a footbridge at the other.  It's not grand and overpowering, but it's more than a bland halt. 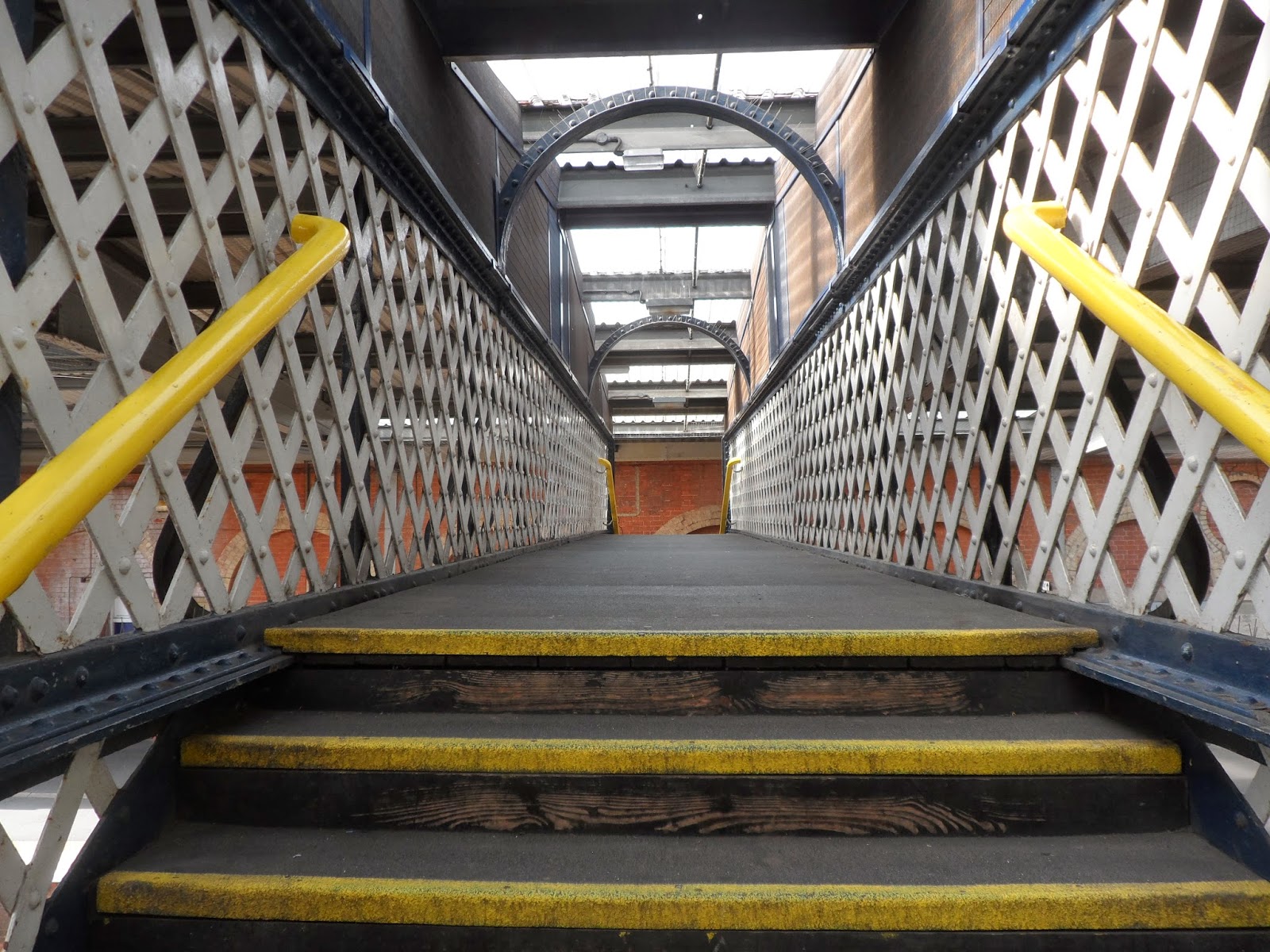 I headed into the refurbished ticket office to get my Freedom of the North East Rover.  It's been extended and knocked through, and still feels a little clinical and empty.  The situation's not helped by the space for a cafe at one end being taken up by a very low budget shop - just a couple of fridges and a display of sweets.  It doesn't offer much more than the vending machine on platform 2.  Still, the man behind the counter in the ticket office was very friendly; he didn't react with bafflement when I asked for the ticket, and he gave me a nice First TransPennine Express wallet to put it in. 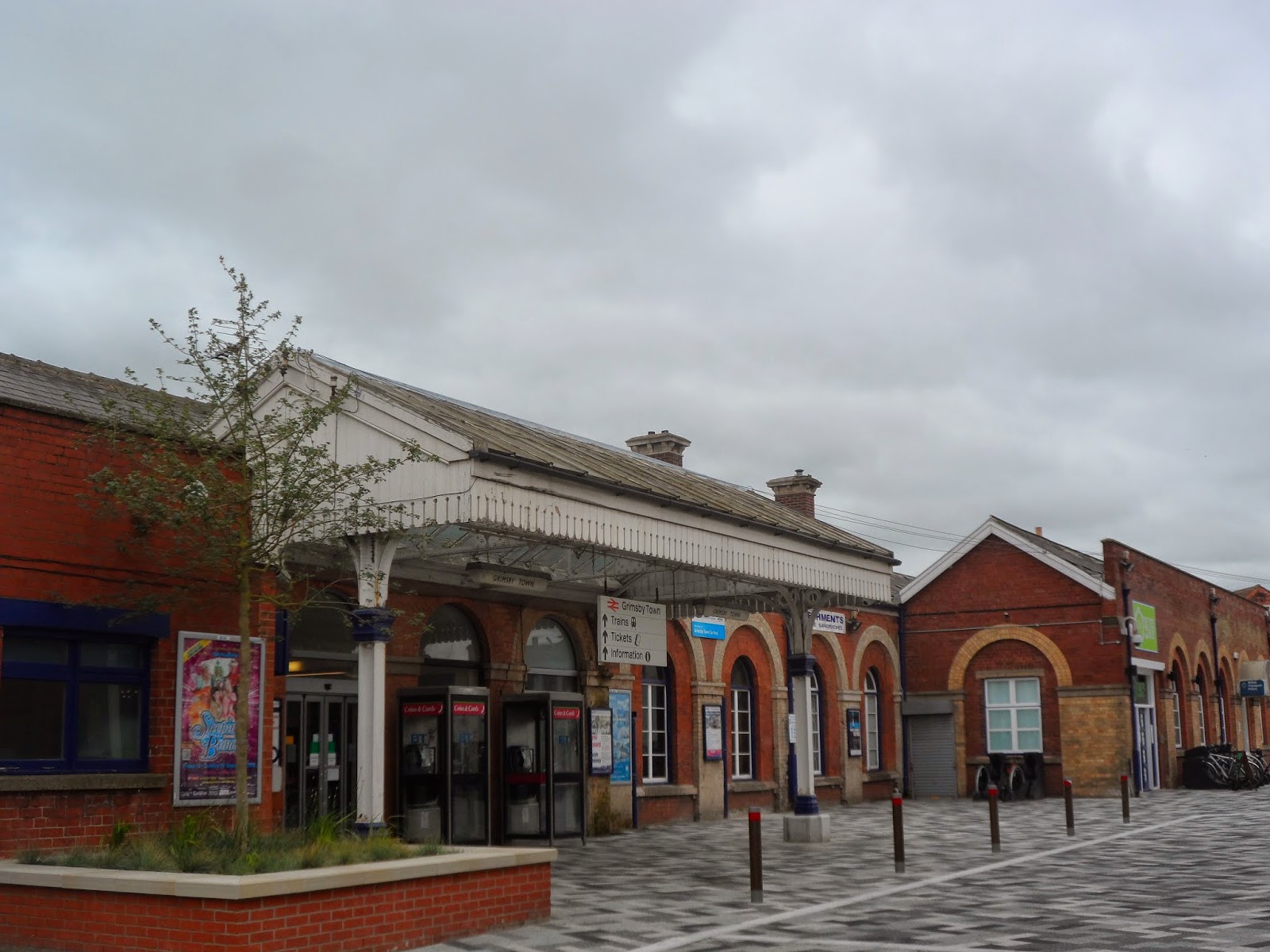 Outside the tarmac has been replaced with a sort of council crazy paving.  There's no separation between road and pavement, which is probably meant to encourage promenading and careful driving, but actually just means things get confusing when a taxi turns up.  (Who has right of way?  Where is he heading?  THERE ARE NO WHITE LINES).  It's a good mix of new and preserved though, with some decent 1950s light fittings and a pretty porch. 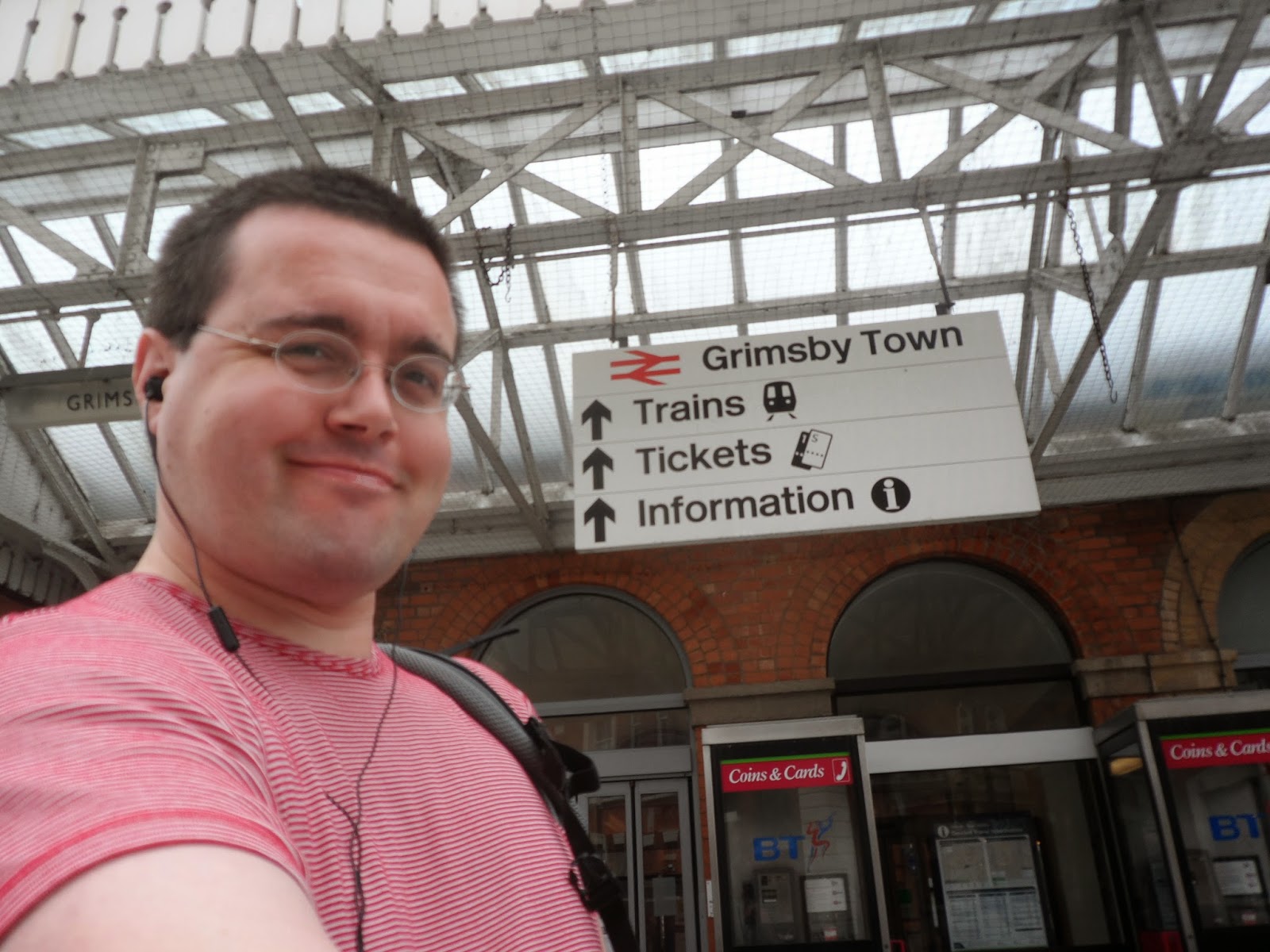 I crossed the road to check into my hotel.  I'm not going to name it.  It wasn't actually dreadful, just a bit of a time capsule.  It was like staying at the Crossroads Motel - not the modern, camp one with Jane Asher, the orange and brown 1970s version with Meg Mortimer and her blue eyeshadow behind the reception desk.  The hotel was a bit tired and threadbare.  Still, it was fairly cheap and it was clean and it was sixty seconds from the station.

Having dumped my bags, I headed out for a leisurely wander to the town's other station, Grimsby Docks.  It didn't start well - I went out the wrong door of the hotel, and ended up amongst the service streets and car parks for the local shopping centre.  Things didn't improve inside the actual shopping centre, a soulless dark precinct that had seen better days. 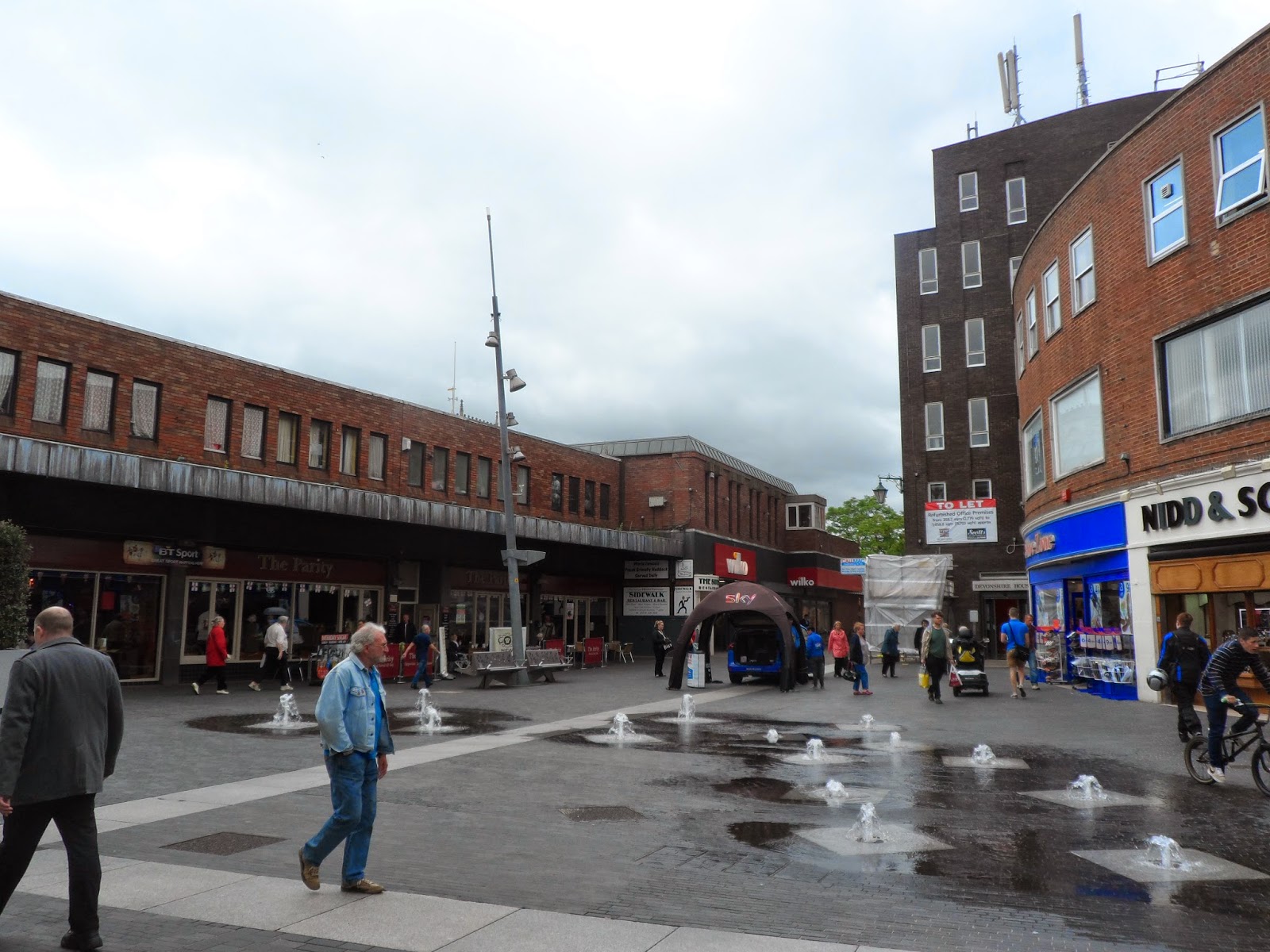 Going out onto the Market Square was a breath of fresh air, in every way; if Grimsby's market was still out here the Freshney Place shopping mall might not smell quite so noxious.  I took a moment for a look at Grimsby's Minster, but its clock was wrong, and I'm sorry, I won't stand for that sort of thing.  One has to have some standards.  Instead I walked along Victoria Street, a pedestrianised thread between chain department stores on the one side (M&S, House of Fraser, BHS) and fast food restaurants and payday loan providers on the other.  One chicken takeaway advertised that it was open until 4am on "Fridays, Saturdays and Tuesdays", which immediately made me wonder what goes on in Grimsby of a Tuesday night.  Is there a weekly rave?  Famished fishermen in search of a burger? 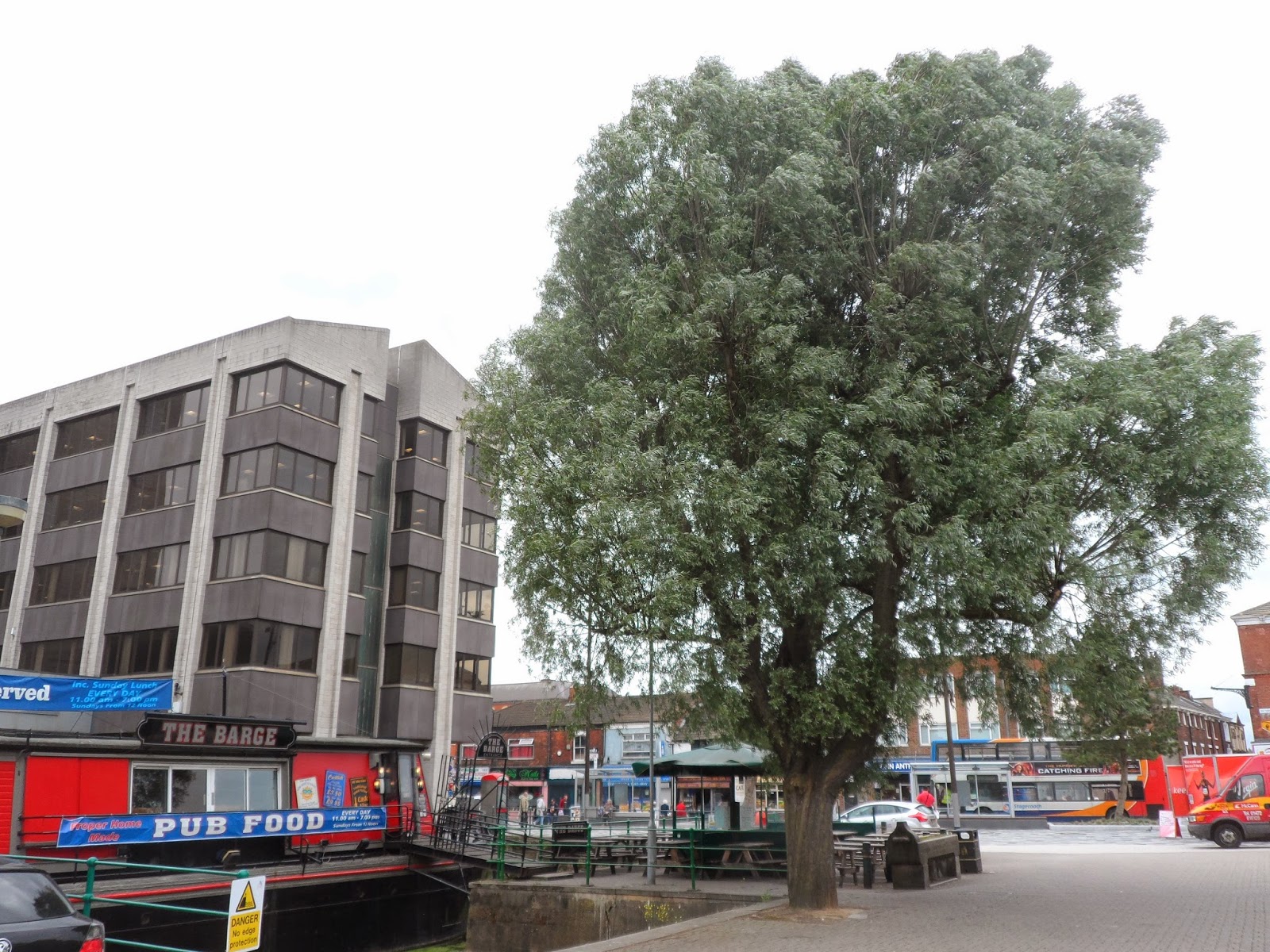 It brought me out into a square crafted around an inlet of the River Freshney.  It seemed this had once been the town's bus exchange, and it was in the process of being rationalised; there were new bus stops at one end, with that checkerboard pavement that I'd seen outside the station, but there was still tarmac outside the shopping centre.  It was a pleasing little place to rest, and I could see why the Council had decided to get rid of all the double deckers taking up this prime bit of real estate. 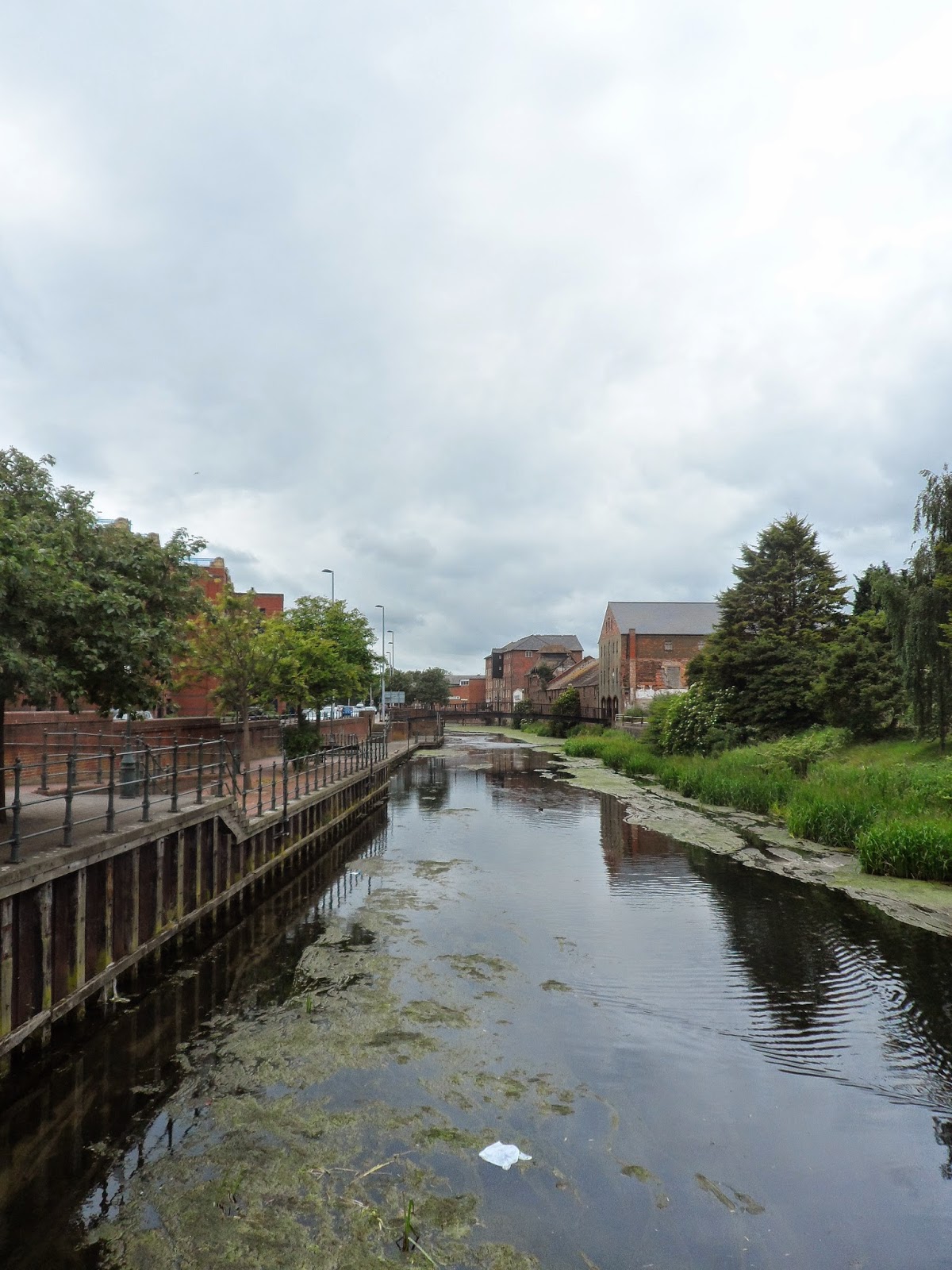 I followed the river north.  An early stab at regeneration had produced some brick apartment buildings, a Sainsbury's, and the National Fishing Heritage Centre.  I considered going in until I noticed it was six quid.  Six British pounds to see a load of mannequins in sou'westers and bits of netting?  No thank you. 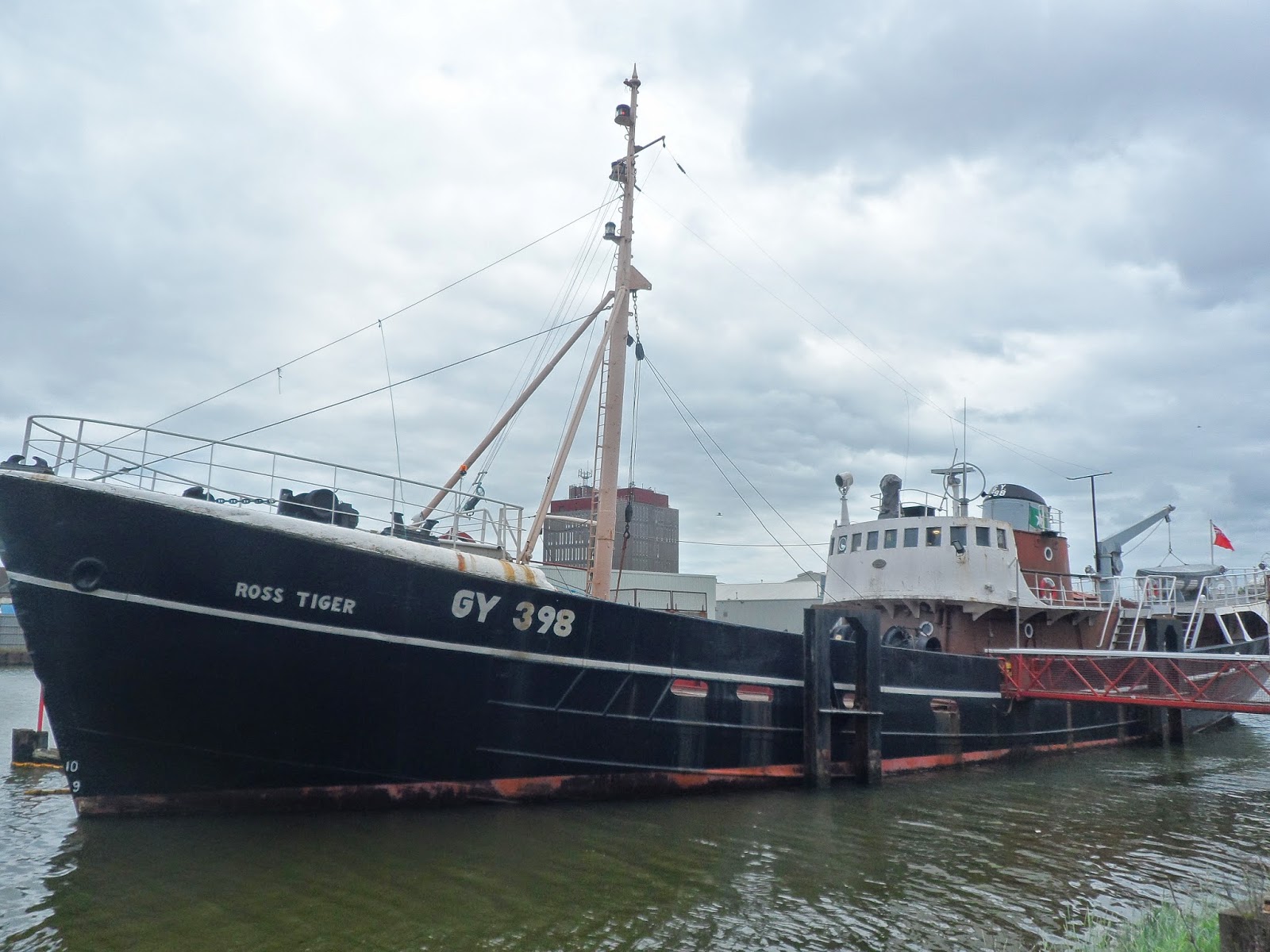 Like Liverpool, Grimsby is a port that's suffered from huge losses over the past fifty years.  While Liverpool's problems came from containerisation, Grimsby was dealt a succession of blows by the Cod Wars, fishing quotas, and cheap foreign imports.  Many of its trawler fleets simply disbanded.  It means that there are still huge warehouses and dockside equipment around, but they're silent. 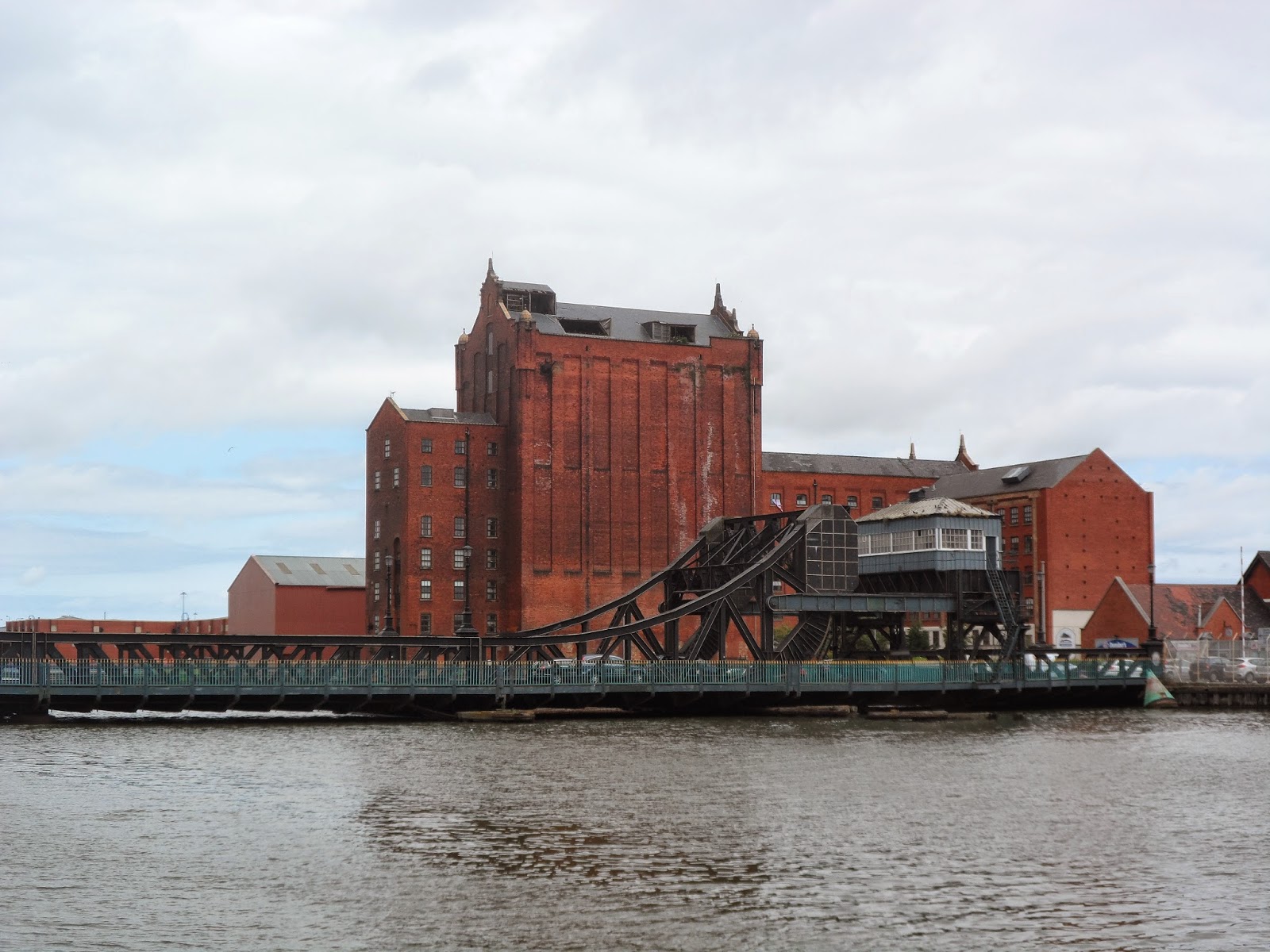 The lower end of the dock estate, closest to the town centre, has been handed over to big box retailers.  Tesco, Asda, Homebase, Currys PC World - all the usual suspects with enormous metal sheds and convenient parking.  The retail parks were squeezed in alongside one another, so instead of a big stretch of shops, you'd get a Wickes and a Sports Direct then, in a separate development, a Halfords and a Next.  It felt bitty and disparate.

I paused for a bit of lunch in what turned out to be the universe's worst Burger King.  I don't know why I continually subject myself to Burger King meals; I find them greasy, they're impossible to eat without getting special sauce all over your fingertips, and they're overpriced.  At least when I visit one in a railway station - they have the monopoly on fast food there - it's out of a lack of other options.  Here, I'd voluntarily thrown myself into the Home of the King.

Tara, the girl behind the counter, was unenthusiastic; after taking my order she walked to one side and stood behind a pillar so she couldn't be seen by any new customers.  She didn't do anything while she was there, just leaned against the wall and stared into space.  I finally got my Steakhouse Double meal - though I had to ask for a cup for my Coke - and then I chomped through its uninspired meat while mayonnaise dripped over my mouth and tongue.  The oversalted fries added nothing except a dryness. 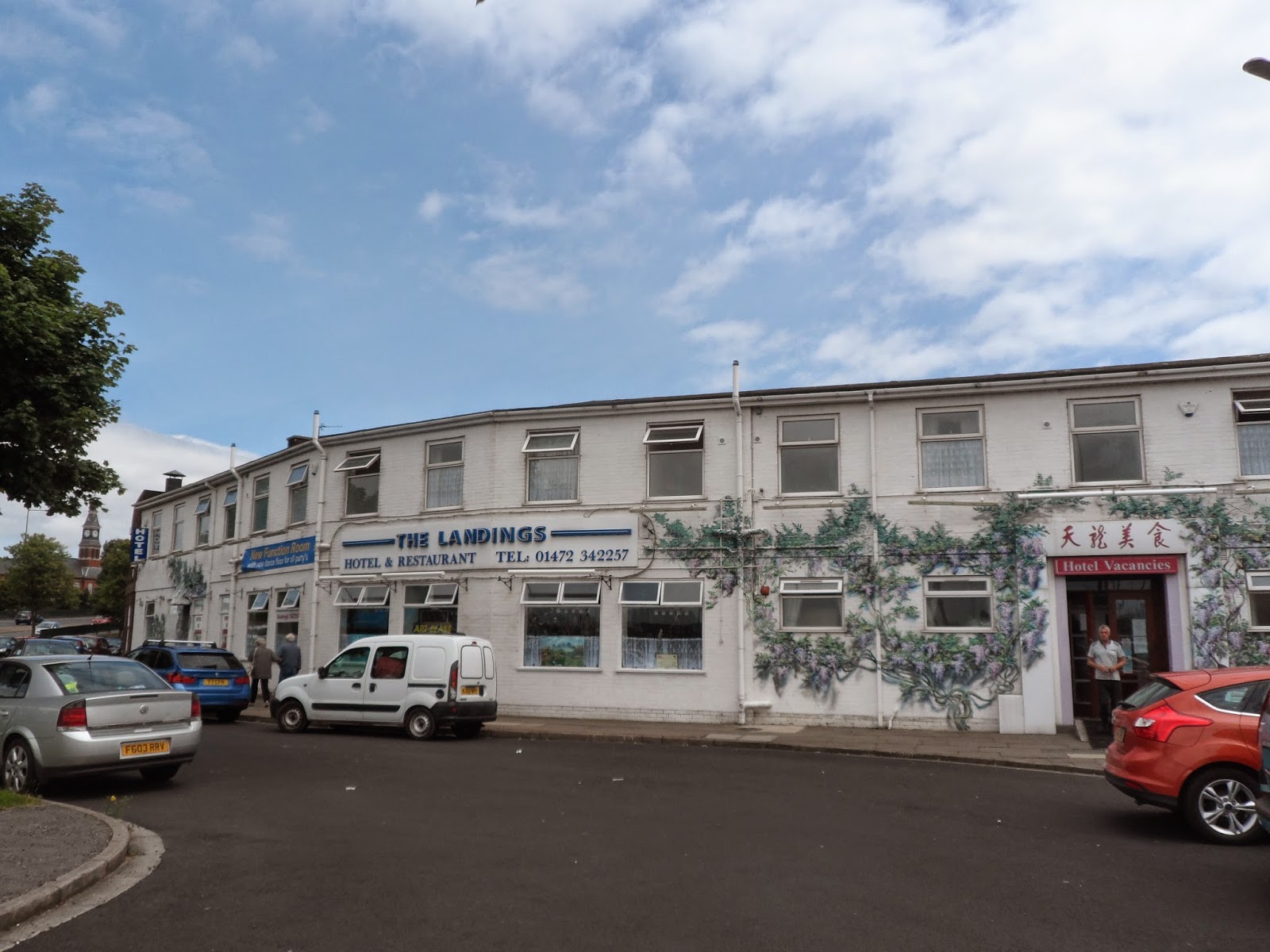 I left it behind, swearing never to go back to a Burger King ever again (until the next time I'm in Sheffield station at 8pm and it's the only place open and I'm starving hungry) and began sucking on a mint to try and get rid of the taste.  Passing the Landings Hotel, an elaborately painted building with a Chinese restaurant belting out the smell of spices and chicken, I entered the dock estate proper.  Cleethorpe Road rose up above me on a flyover over the railway line, but on the other side was the Dock Offices, with a statue of Prince Albert outside. 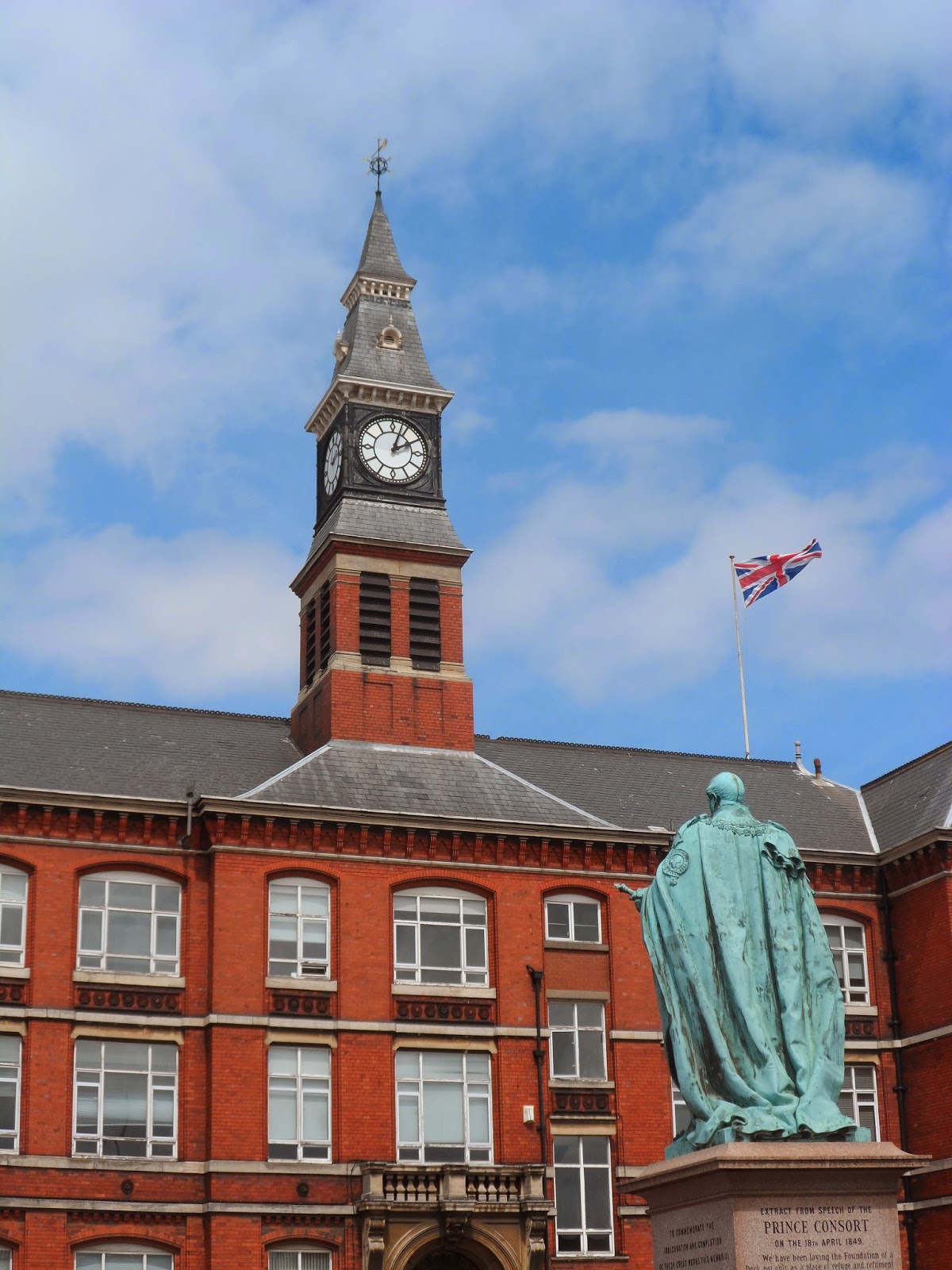 Now, finally, I could smell fish.  I thought I'd be whacked with the scent of cod everywhere I went in town but it was only here I got the full scent.  It was surprisingly pleasant, not overpowering at all.  I went back in search of the footpath up and over the flyover, and found a lonely ramp underneath it. 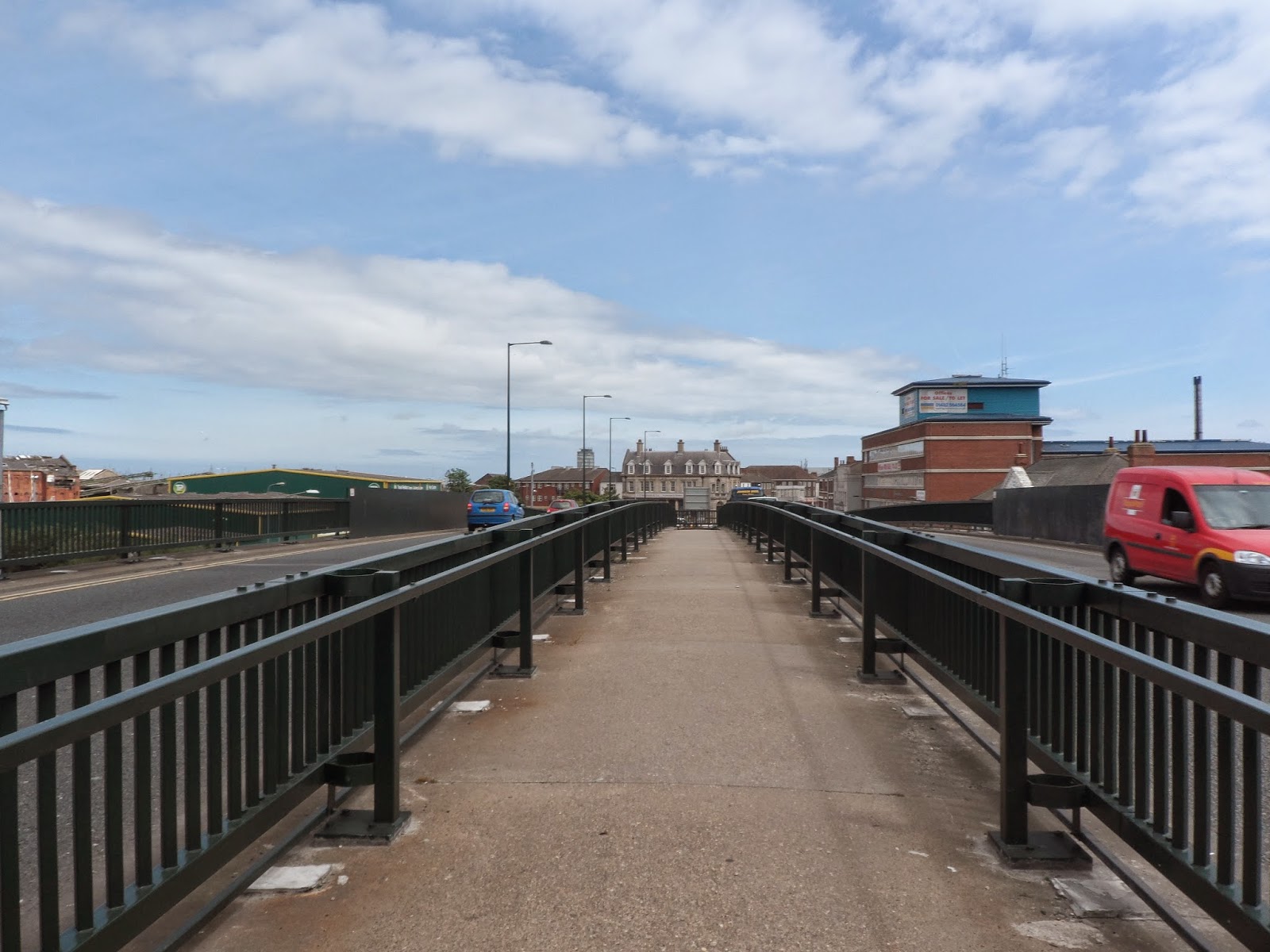 I was surprised when it brought me up right between two lanes of traffic.  Someone in the Highways department must have been even more OCD than me, and wanted the bridge to be perfectly symmetrical.  It was distinctly disconcerting.  There were fences and a footpath but I still felt like I had wandered the wrong way.  The only plus was that I got a better view of Grimsby's famous Dock Tower, an Italianate structure built by the Victorians to power the hydraulic docks.  Sadly it's not open to the public. 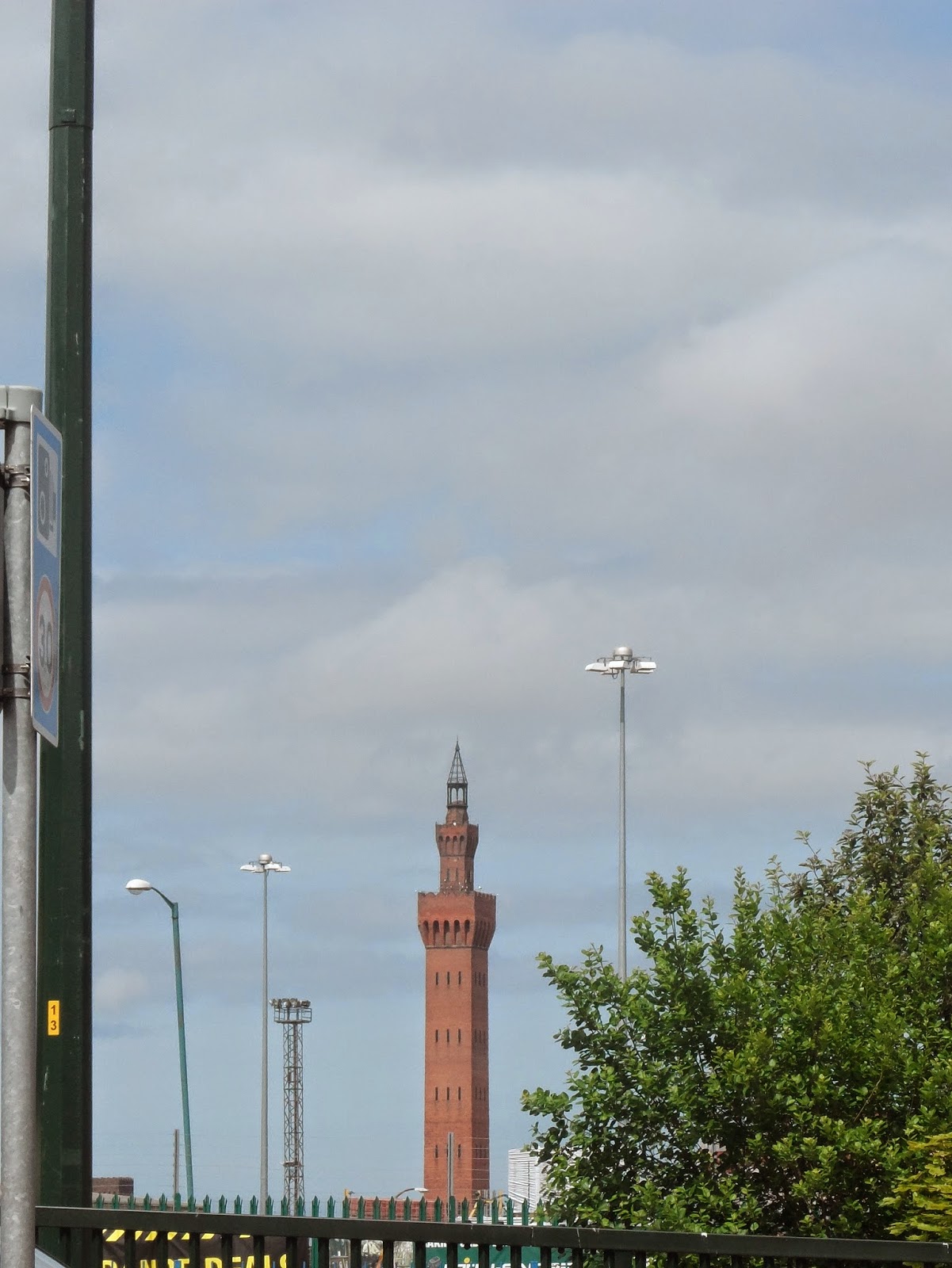 Gratefully descending back down to ground level, I dodged around the offices of the Grimsby Telegraph and into Freeman Street.  I'd seen signs pointing towards the "Freeman St Shops", so I guessed there'd be a small local centre here, but I actually found a row of miserable, boarded up stores.  Even the sex shop, "Little Amsterdam", was shuttered.  Past the Grimsby Martial Arts Academy - there seems to be a disproportionate amount of karate and boxing clubs in the town; perhaps the local youths are really good at kicking the shit out of one another - I ended up in front of a concrete lump without any merits whatsoever. 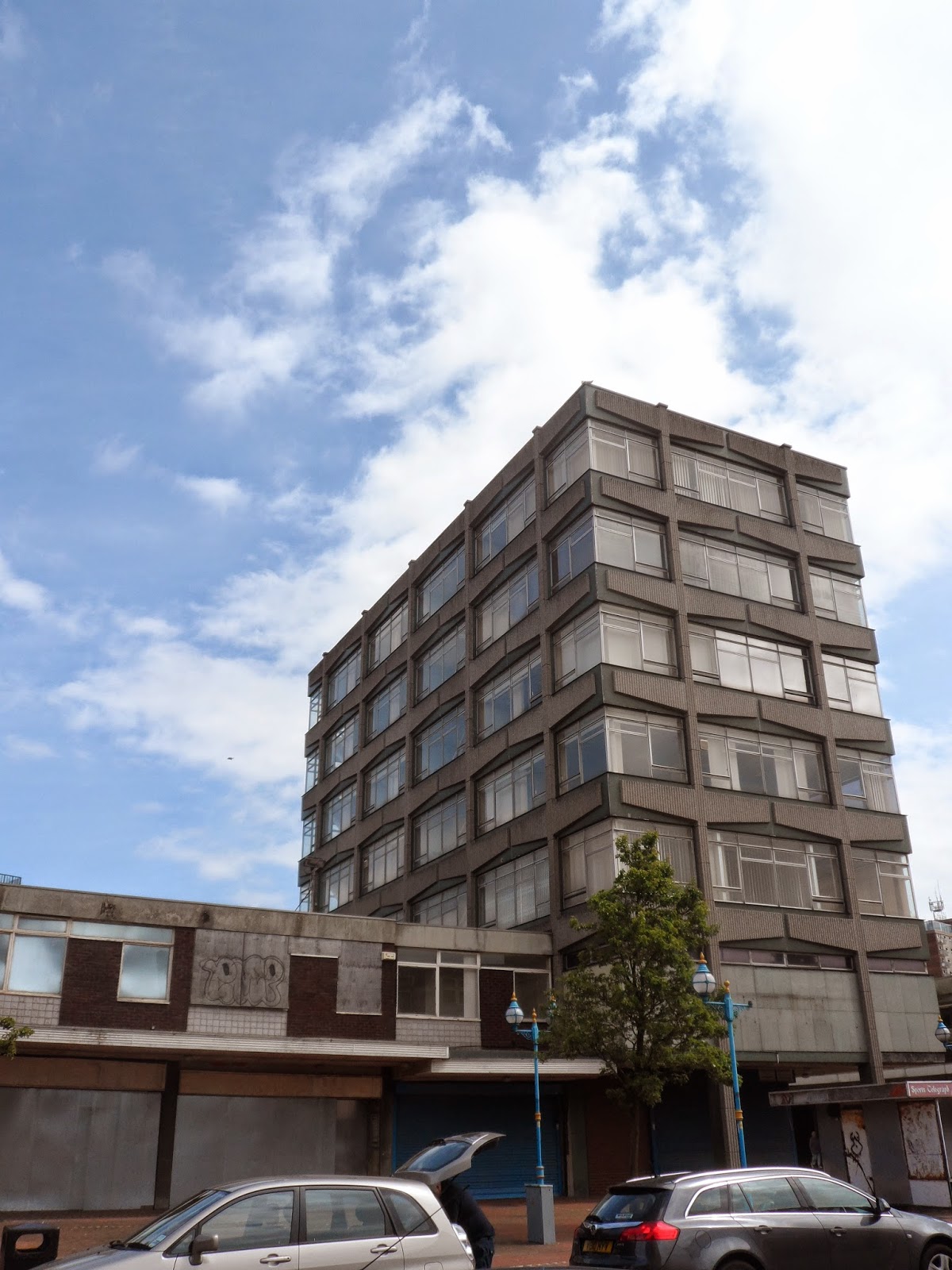 That was it.  I metaphorically threw up my hands.  I'd not seen anything that could really convince me that Grimsby was a decent place to visit.  It was grubby and miserable and ugly.  I'd tried, I'd tried so hard, to find something to like, but the best I could come up with was a distant vista of a tower.  That was it.

I turned away to find Grimsby Docks station.  It's just a tiny halt on a single track; maybe it was busy in the old days when the fishermen were all over the area, but now it's only a platform behind a garage. 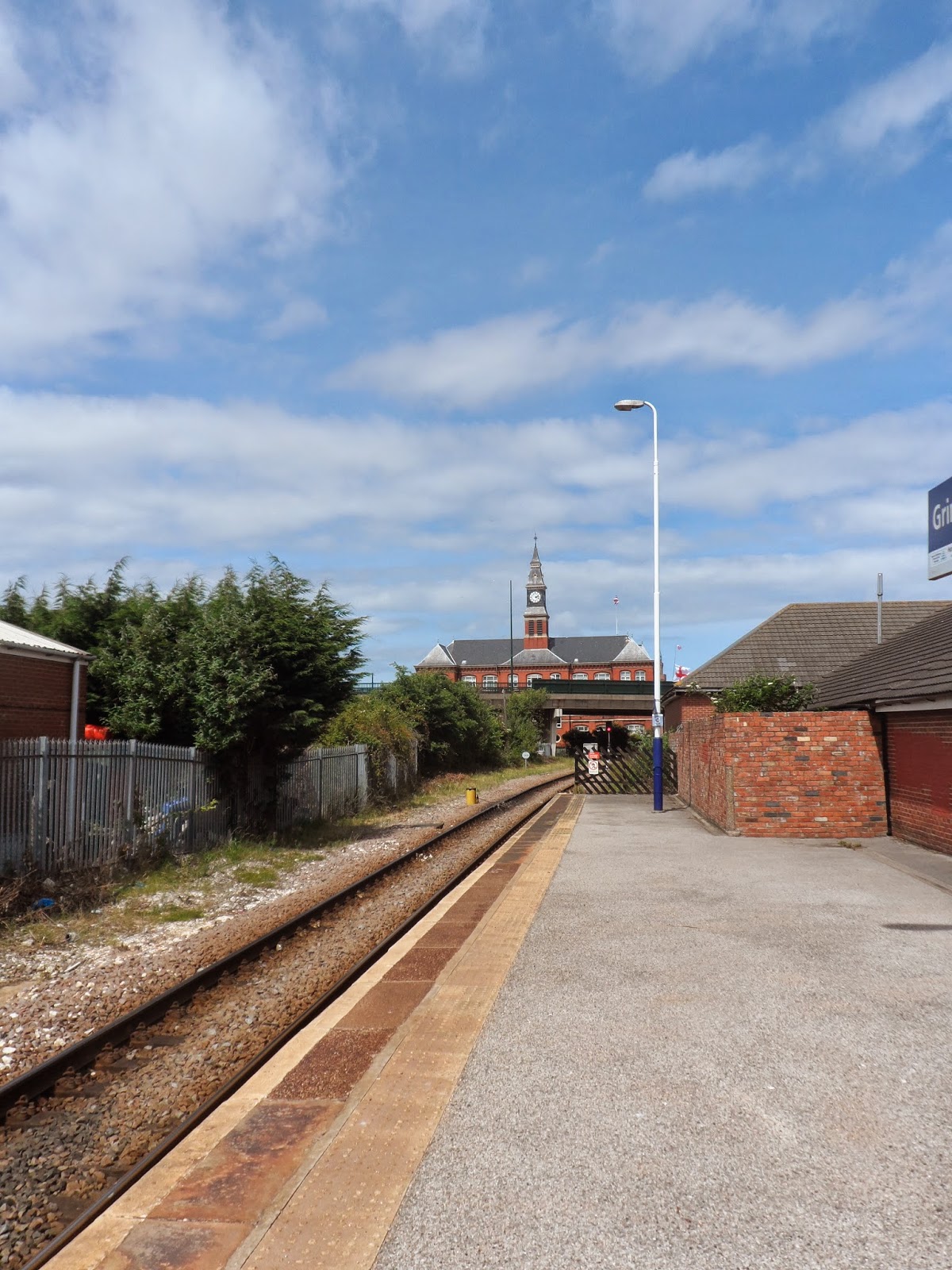 I felt bad.  I needed something to cheer me up.  Time to go to the seaside... 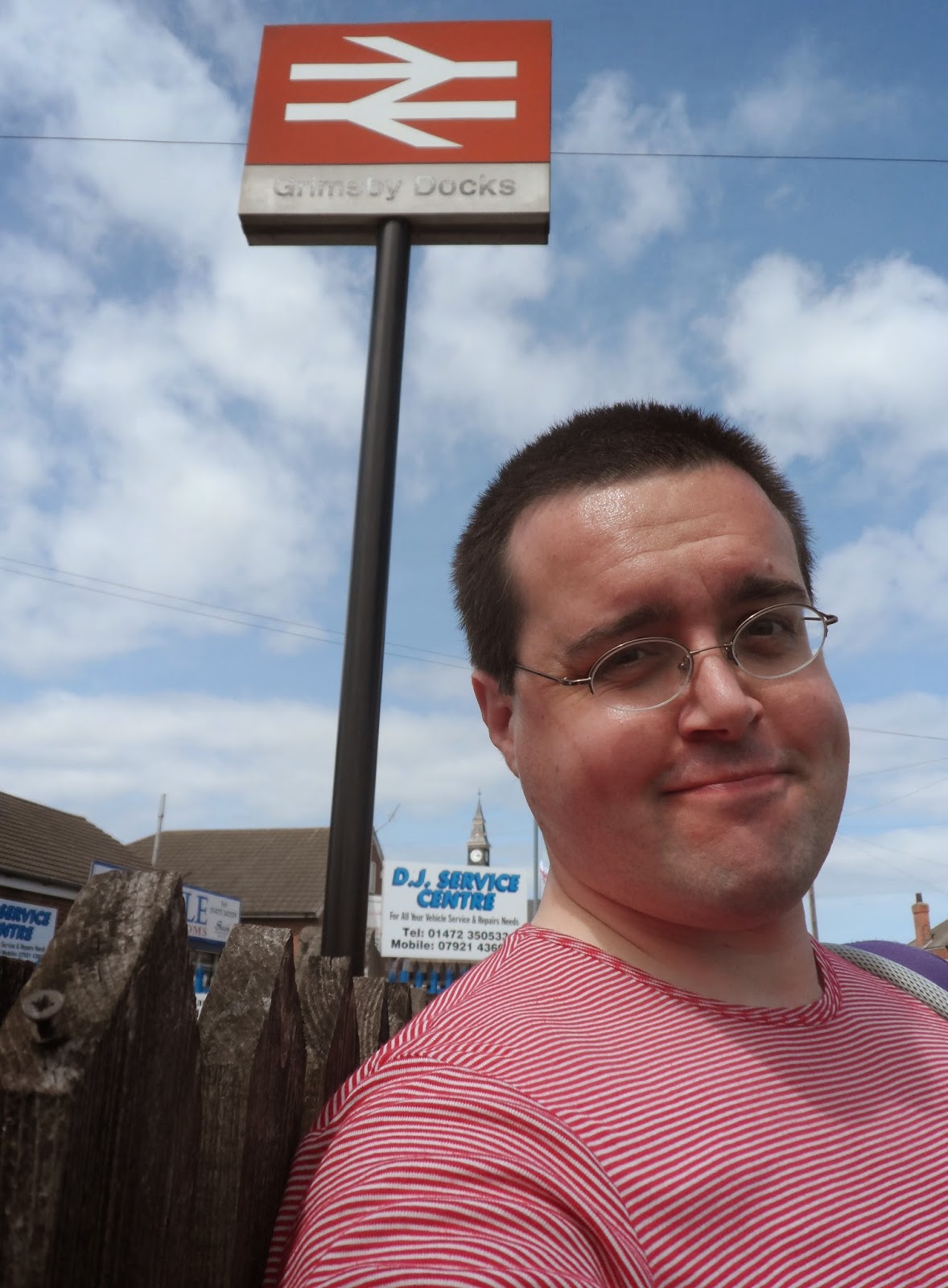 I was once told that although the centre and the docks of Grimsby are quite grim, as soon as you move slightly further out there's a lot of very nice long tree-lined avenues. Of course, they could have been pulling my leg or a local just being very defensive. Or I suppose it may be that even the most awful places have nice bits of suburbia.

Even Middlebrough and Wolverhampton have some nice suburbs. One of Wolvo's nicest suburbs goes by the name of Wergs.

I expect there's a load of nice Victorian streets outside the town centre where the people who actually OWNED the fishing fleets lived. Mr Prince, Mr Findus and Captain Birds Eye wouldn't settle for a flat above the Cash Converter.

There are lots of Victorian houses just outside town near People's Park. Veh posh. Freeman Street is one of the grimmest places in the world. It has been having endless rejuvenations for about 50 years and none of them ever come to anything - although even run-down as it was in the 80s, it was way better than its current state. The crazy paving has caused muchos outrage in the Evening Telegraph.

I'm glad you turned up to comment Ruth as I was nervous about criticising your home town! Freeman Street was almost comically awful - it was like a set designer had gone to town on the theme of "Northern misery"...

There are indeed constant reports of "imminent" renovation of Freeman Street. Never going to happen. When I first visited Grimsby a decade ago it was when the railway station had a cafe, and a very bizarre place it was too, run by a man who was at least seventy in a white coat, who served me two rounds of toast for 20p. I think it's also the case that you have to ask at the ticket office for the key to the toilets.

Nowadays, because I always get on and off at Cleethorpes, I only see Grimsby station from the train or from a rail replacement bus in the car park. Not done that since the crazy paving arrived, though.