There are two entrances to Merseyrail's James Street station.  One's got ticket machines, lifts, a refreshment kiosk and enough yellow and grey to make the Colour Tsars go all funny inside.  The other one, on Water Street, hasn't been updated for decades.  It's accessed via a steep, gloomy tunnel, there's a 1970s ticket counter wedged into a 1930s ticket hall, and it's chipped and dirty.  The booking office is only open during peak hours, and when I tried buying a ticket there a couple of years ago, the lady behind the counter had to write it out on a bit of paper. 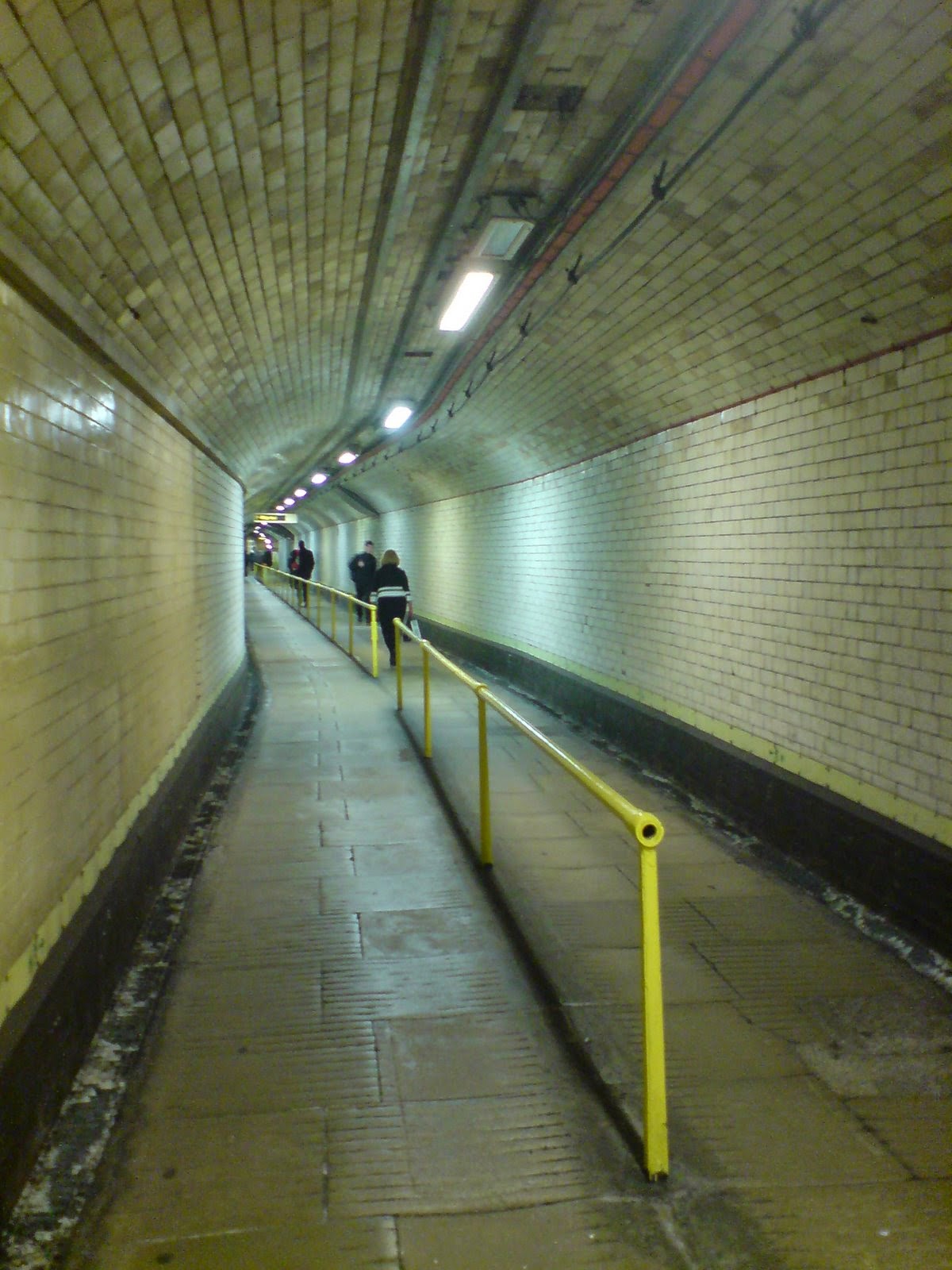 Which is why Merseyrail have put in a planning application to refurbish the lot.  As part of the Grade II* listed India Buildings, special permissions have to be gained to make any kind of alterations.  Merseyrail could have done a cover-up.  Times are tough; I'm sure they could have made a valid case for covering up all the surfaces with white boards, like at platform level.

Instead, they've applied to restore and enhance the whole area, and I cannot be more happy.

Working with Michael Cunningham Architects - the people responsible for the superb restoration of Manchester Oxford Road - Merseyrail have applied to bring the Water Street ticket hall back to its 1930s finery.  The mosaic tiles will be cleaned and regrouted; where they are missing, reproductions will be created.  The unsympathetic flourescent lighting will be replaced with "heritage-style" modern fixtures.  The Loop line era ticket desk, all blue tiles and stainless steel, is to be torn out and a more in keeping green wood and glass structure will be inserted in the gap.

The 21st century won't be completely abandoned.  There will still be an electronic departures board, but this will be moved to the side in a more subtle location.  The huge emergency/information point will also be replaced with a smaller, more discreet version.  The wiring will also all be tucked away neatly.

Furthermore, in news that is bound to make the Colour Tsars sob into their banana milkshakes, the yellow will be removed from all the heritage areas.  The posters will be surrounded by grey frames, so not a total victory, but the emphasis will be on restoring the green and cream colouring of the original building.

Meanwhile, there's that subway to the platforms.  This isn't actually listed, so in theory, Michael Cunningham and Merseyrail could do anything with it.  It certainly needs some work.  Anyone who's used it knows that it's at a perversely steep angle, with a slippery stone floor and water running into it.  It's not a pleasant feature.

The water, sadly, isn't going anywhere; it's just one of the disadvantages of being 200 yards from the river.  To try and minimise its effect on the passageway the architects have proposed a subtle drainage system, just below the curve of the roof, to catch the worst of the ingress.  Meanwhile, the stone floor - which is original to James Street's opening in 1886 - will receive an anti-slip surface to stop people from skidding all the way to the bottom on rainy days.

As for getting rid of that gloomy, dank feel, they've proposed something special.  The strip lights will be replaced with coloured LEDs.

As you pass up or down the passageway you'll move through different sections of coloured light, breaking up the relentless slog and making the journey far more interesting.  That in itself would be a vast improvement on what's already there, but the nods to James Street's historic position as one of the earliest underground stations in the world will be further emphasised.  The corridor is going to be lined with reproduction Mersey Railway posters, with feature lighting to draw the eye, and brass plaques will be inlaid into the floor showing the station's position at different points in the city's history.  There will even be a new, bespoke wooden handrail along the length (and no, it won't be yellow).

The final enhancement will be on the outside of the building.  The current entrance is via two small doorways in the corner of the India Buildings, and it's not exactly notable.  The deference to the building means it's difficult to spot; in fact, when I collected the entrance back in 2008, you could barely see the station name. 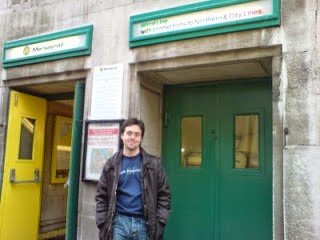 Those fire doors will be replaced with more prestigious ones, in the same green and cream colouring as the interior of the booking hall.  Two new signs will also be erected.  The first is yet another nod to the station's heritage; there used to be an internally illuminated box on the corner of the building, with "MERSEY" (as in Mersey Railway) written on it.  This will be replicated, though obviously it'll say "MERSEYRAIL" instead.  Meanwhile, over the doors, there will be aluminium letters spelling out the station name, back-lit with a "halo" effect.  Basically, you won't be able to miss it. 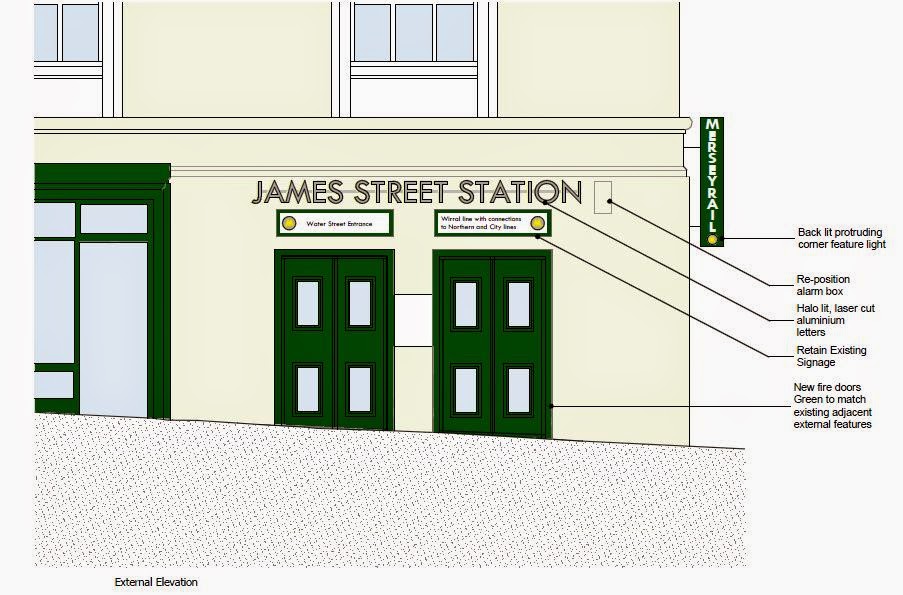 In short it's the most exciting railway project in Liverpool since Central was rebuilt.  There's an opportunity here to create something which isn't just an improved passenger experience, but is also a tourist attraction in its own right.  Think of how many people visit the Philharmonic Pub on Hope Street just to look at the gents!  Restoring this beautiful ticket hall will make a new sparkling gem in the centre of the commercial district; hopefully it'll be combined with longer opening hours, so that visitors can experience it throughout the day.  I am genuinely thrilled by the proposals, and I have to give rapturous applause to both Merseyrail and Michael Cunningham Architects.  Now please hurry up and do it!

All images, apart from the photographs which are my own, are taken from the planning application and are reproduced for illustrative purposes only.  The full application can be viewed here; comments can be registered until the 29th May.
Posted by Scott Willison at 13:59

Brilliant news Scott. I agree with everything you have said. I'm a keen photographer, so I can't wait see this when it's (hopefully) complete, yay, it looks great doesn't it :)

I have only been through here once though, when I was on a course in Liverpool a couple of years ago, that needed me to be going through the Station at morning peak time. Are there plans to have the new entrance open out of peak hours at all (that would be even better), anyway good news all round, great write up too :)

I like the colours in the sloping passageway. Disco Inferno.

It could be the world's longest, thinnest rave.

Excellent write up Scott, really is fantastic news, probably my favourite station on the whole network