Ending on a High 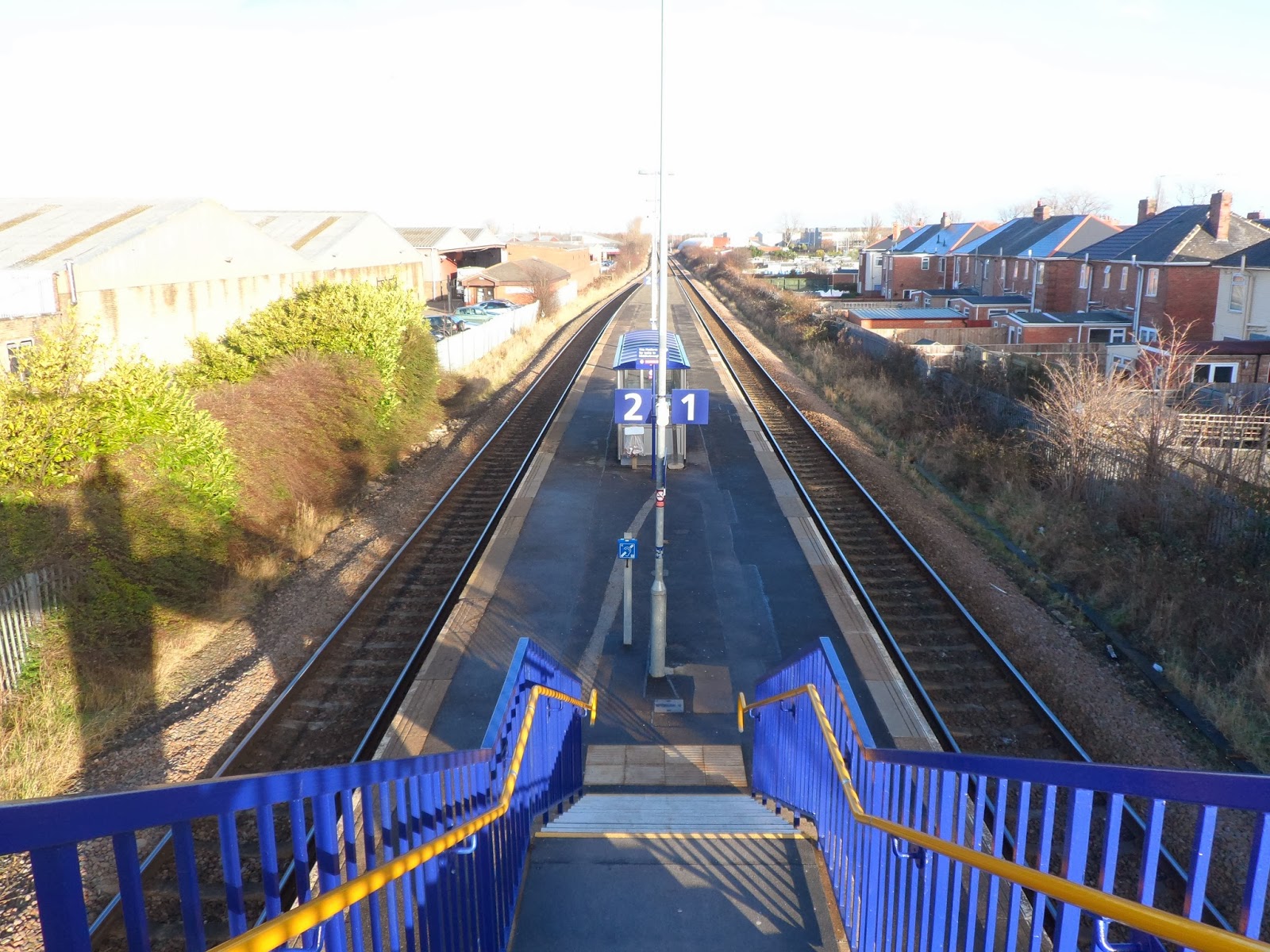 It's odd how an island platform can change your perception of a station.  I don't mean a large, busy halt, where the island is just one of four or six or twelve stopping places.  I mean when there are two tracks and the only place you can alight is on a strip of concrete between the two.  Suddenly you're isolated and set apart.  You're lonely.

Billingham station was an island platform, with a set of concrete steps to take you over the tracks.  After the open spaces of Seaton Carew it seemed harsh.  It's as though you've been abandoned in the middle of Railway-land, not a friendly country occupied by Thomas and Friends, but an expanse of iron and steel that's not interested in humans. 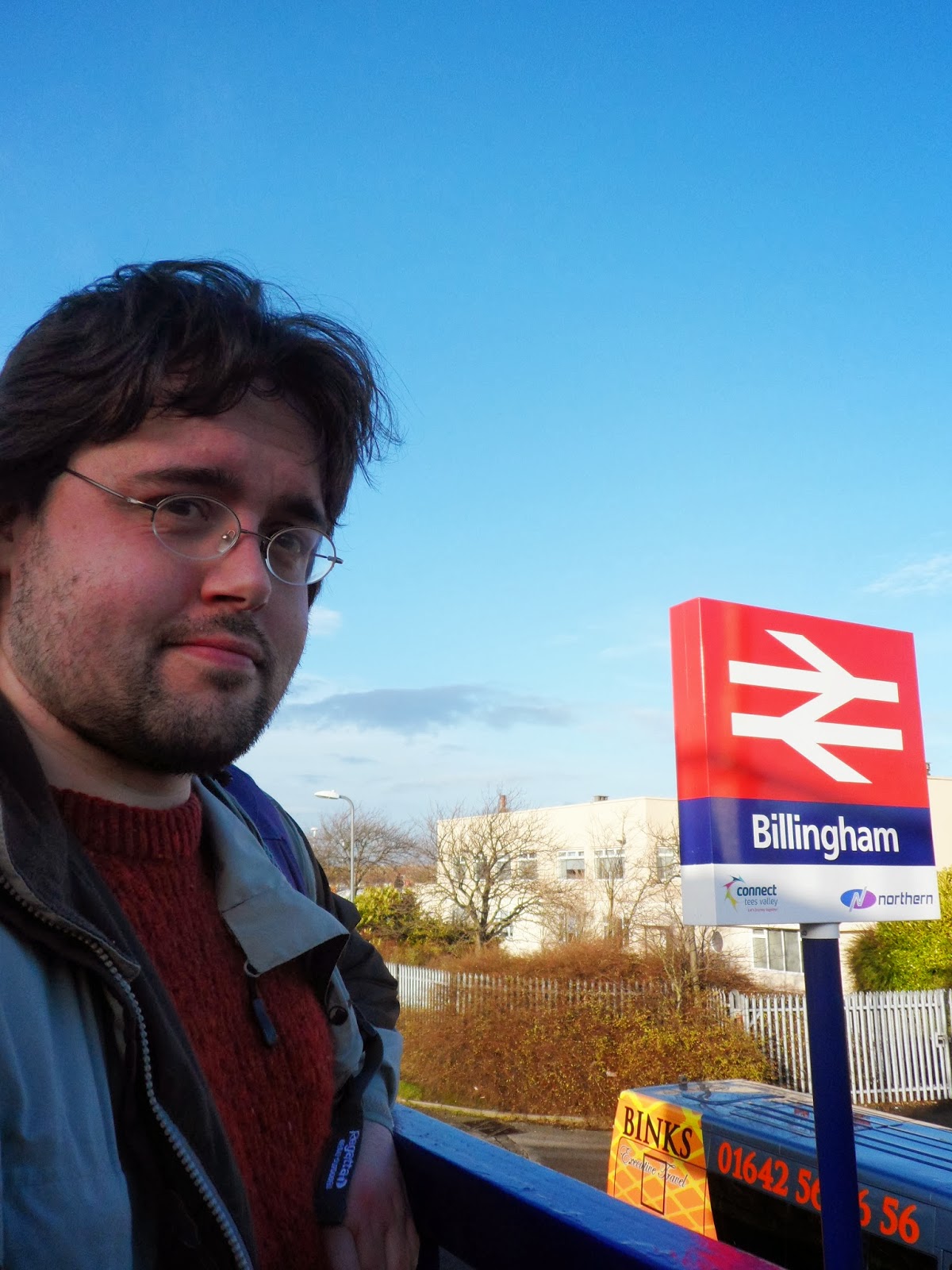 On the other side of the tracks there was a small turning circle and a taxi firm in a prefab hut.  My fellow passengers were obviously locals - they strode confidently down what looked like a dead end street to me, but must have been a secret short cut.  Another girl ran ahead, into the car park of the vast Tesco's just outside the station, and flung her arms round her waiting boyfriend.

There were little units lining the road - workshops, car washes - presumably the kind of industrial development that was all over here until the superstore came along.  I walked along the road, then paused underneath the giant chimney of the Stockton-on-Tees District Heating centre (now closed). 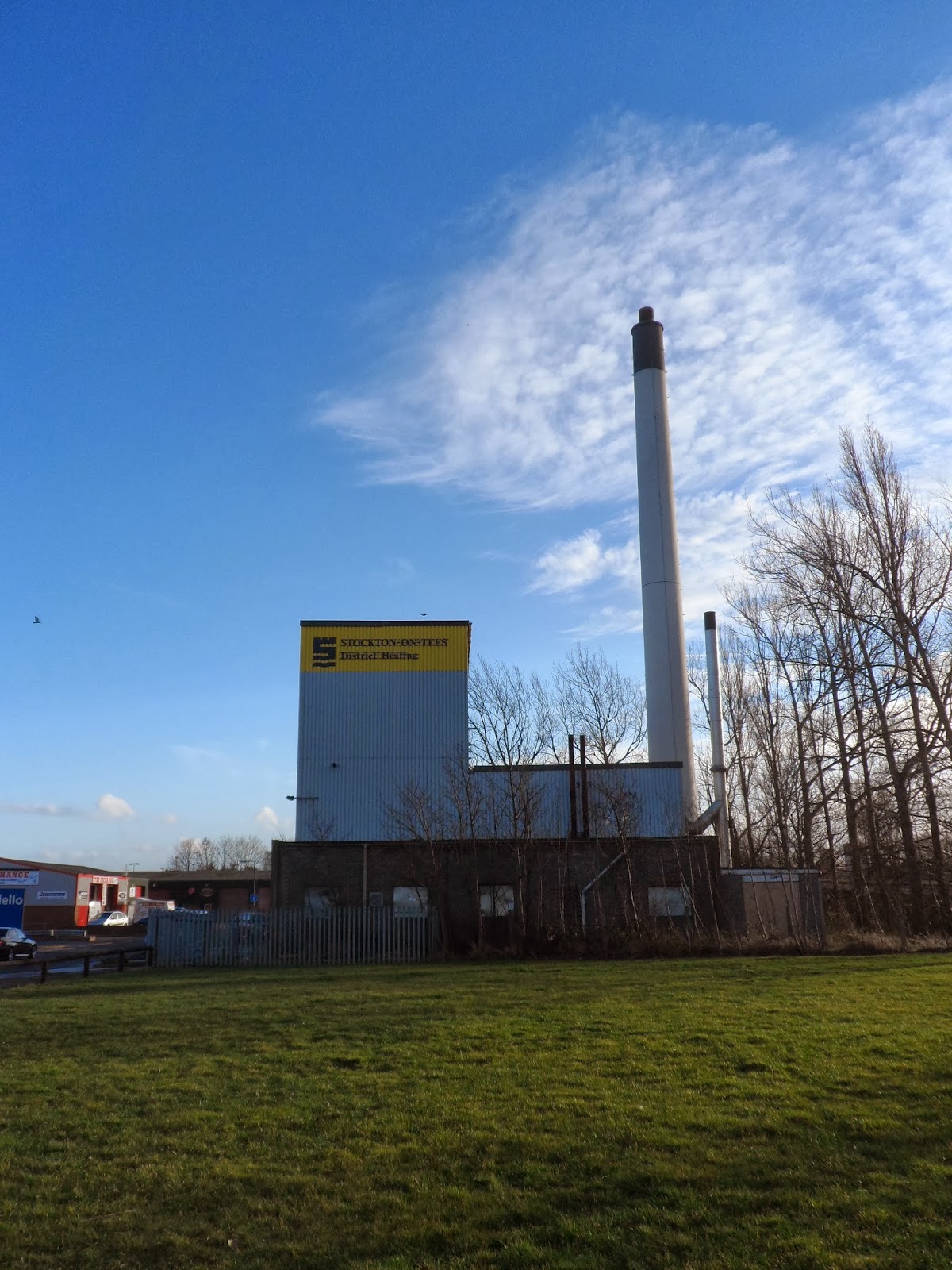 Shouldn't I have turned left by now?  Or was it right?  I pulled out my phone and looked at Google Maps, but I couldn't quite work out my walking route into Stockton town centre.  I turned back - perhaps if I returned to the station I'd be able to start again - and the little arrow on Google turned in what looked like completely the wrong direction.  My internal compass, normally so reliable, was fudged, like I was sat next to a magnet.

I realised I was tired.  It was now early afternoon, and I'd been up for twelve hours.  I was booked on a six thirty train back to Liverpool, which meant I wouldn't be home until about 10:30 if I was lucky and managed to get a decent connection at York.  If I'd been at home, this was about the time I'd have slipped back to bed for a siesta.

Well, the bus stop was right there, and they were every ten minutes.  I got on behind a Goth boy, and asked for a single into Stockton.  The driver seemed confused when he realised I wanted to pay with cash.  We seem to have reached a state with public transport where people who don't have regular passes - people who aren't commuters, pensioners or students - just don't use buses.  I've had similarly befuddled looks from drivers on Merseyside, baffled that I wanted to exchange money for a service.

The only thing I knew about Billingham before I arrived was that it was where Jamie "Billy Elliot" Bell grew up.  It turned out to be a fine, well-laid out council estate, with long curving avenues and greens.  The gardens, sadly, were mostly paved over for car parking, but it still seemed like a good example of social housing.

We passed long rows of local shops, past "The Theatre Upstairs" (Listen very carefully, we shall say this only once: 'Allo, 'Allo, 17th-22nd Feb) and over the wide dual carriageway that whisked the tankers and trucks to the chemical works without stopping.  After that, the houses became smaller and grimier, and then disappeared altogether.  They'd given up trying to regenerate this part of town, abandoned all pretence that it could ever be a decent place to live, and now it had been decimated.  Wide tracts of rubble showed the spots where there used to be flats.  Piles of earth as high as a house towered over bare streets.  Signs promised new developments to come, but were deliberately vague about a timescale. 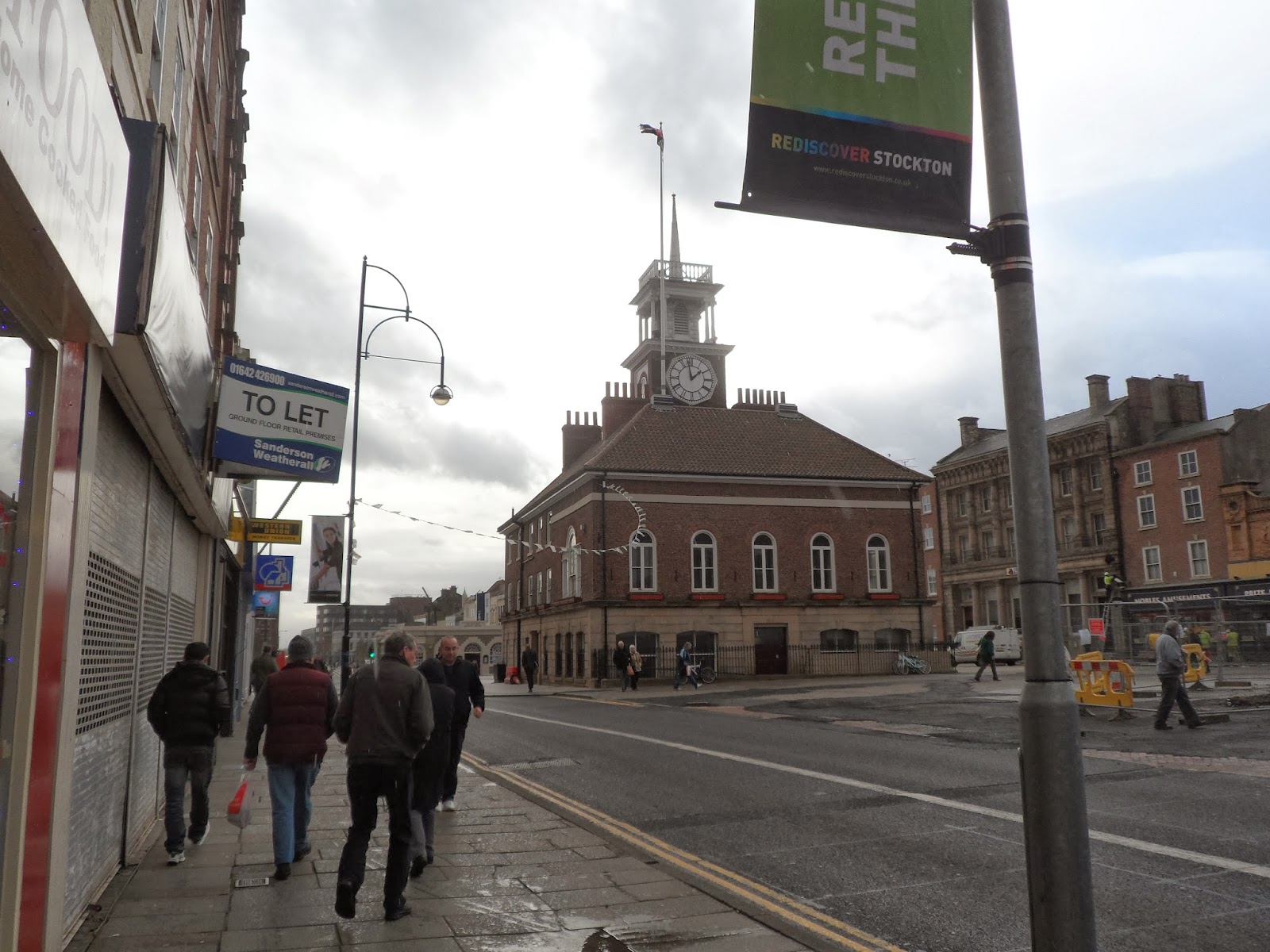 The bus finally dropped us off on Stockton's High Street - the bit of it that was still open, that is.  The wide central avenue was being torn up and repaved as part of another redevelopment, one that will see the installation of a paved expanse, a water feature and an "automaton".  Should we be inviting automatons onto our nation's high streets?  That's just asking for the robots to rise up and destroy us.  We may as well just bow down before our new computer gods right now. 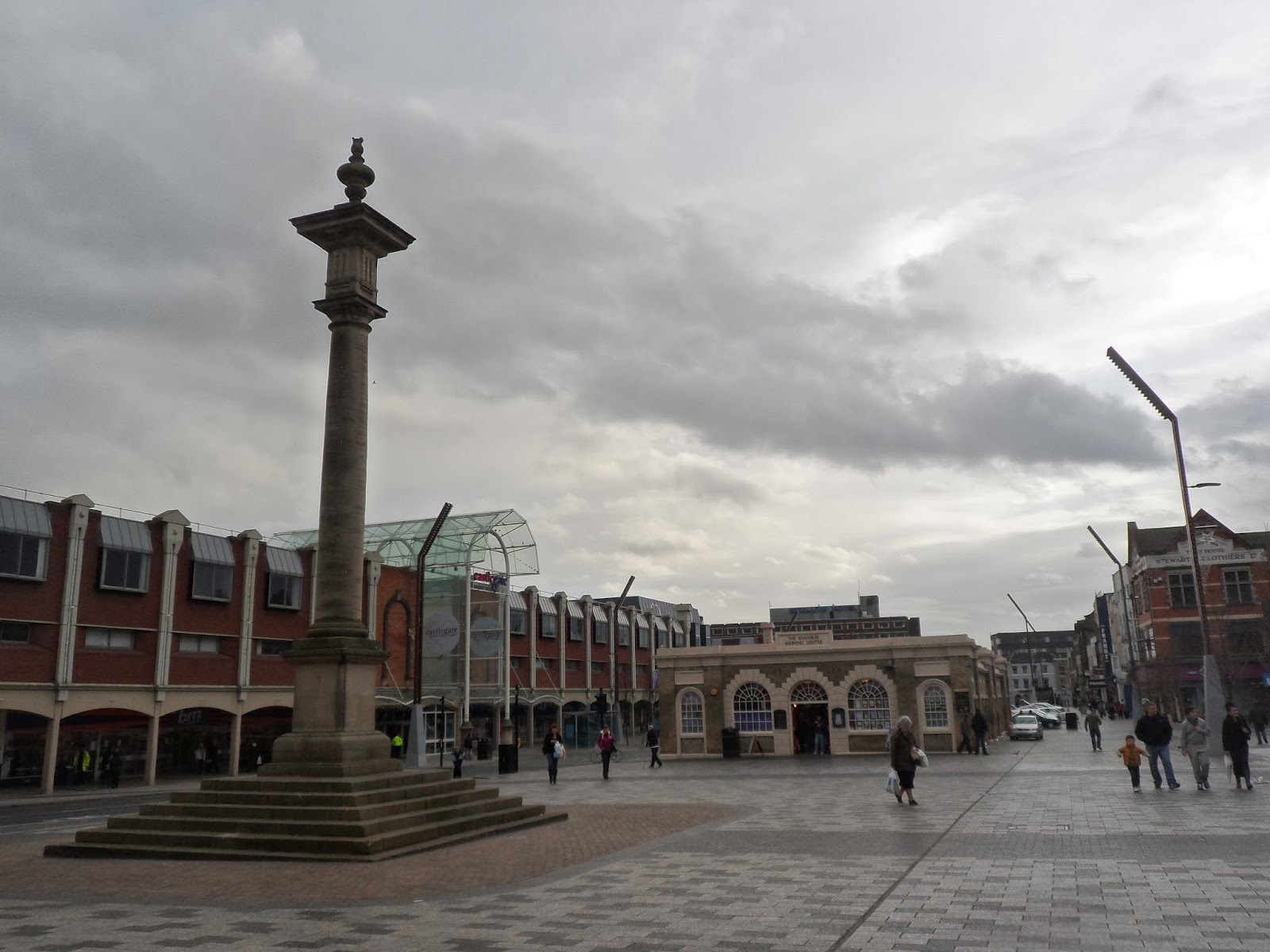 What they'd done so far looked good, plenty of clean new paving and, of course, new lamp posts.  It was just away from the High Street that things became problematic.

I have a great affection for what you might call "grimier" cities.  I like a town that works hard and doesn't take your appreciation for granted.  Chester, for example, basically says "We've got a Roman ampitheatre and a medieval wall and some rows.  We're really fucking charming.  You have to like us, or you're an idiot."  It takes your appreciation for granted, and sort of doesn't care about you.

A town that's been knocked about has far more appeal to me.  Somewhere like Doncaster, or Dewsbury, or even Liverpool.  A city that's been kicked about for a bit but has worked its way back up.  It might not be as pretty as others, or have as many tourists, but it's got a reality to it, a healthy cynicism and sense of awareness about its position in the world.

It's no pleasure for me to say that I didn't like Stockton.  I had a good root around, up and down backstreets, through the shopping centre and off the ring road, and it never grabbed me.  It seemed drab and unwelcoming.  It was ugly.  It just didn't seem to care. 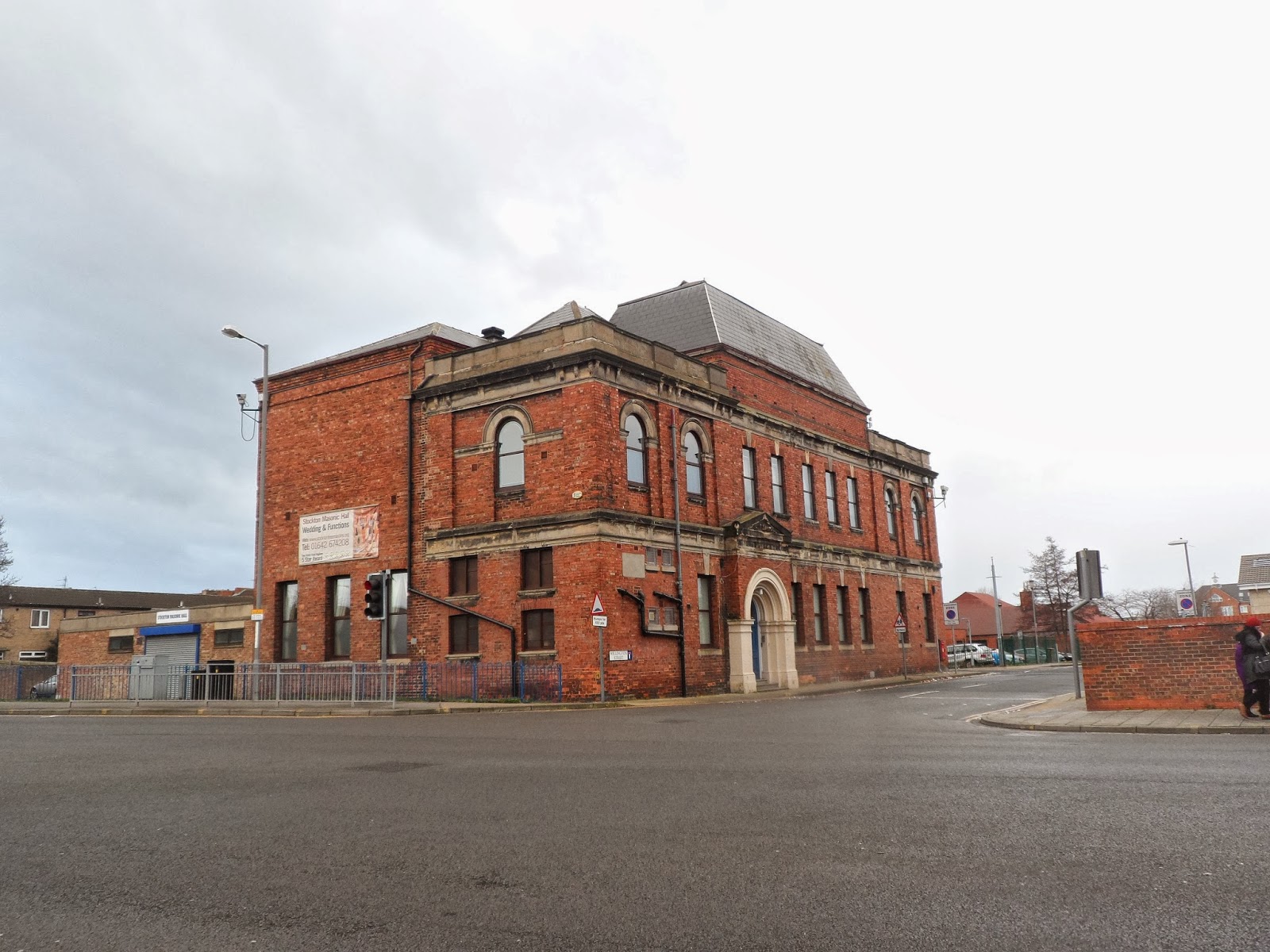 I walked around for a bit and finally gave up.  I couldn't find a positive.  I decided to just head for the station. 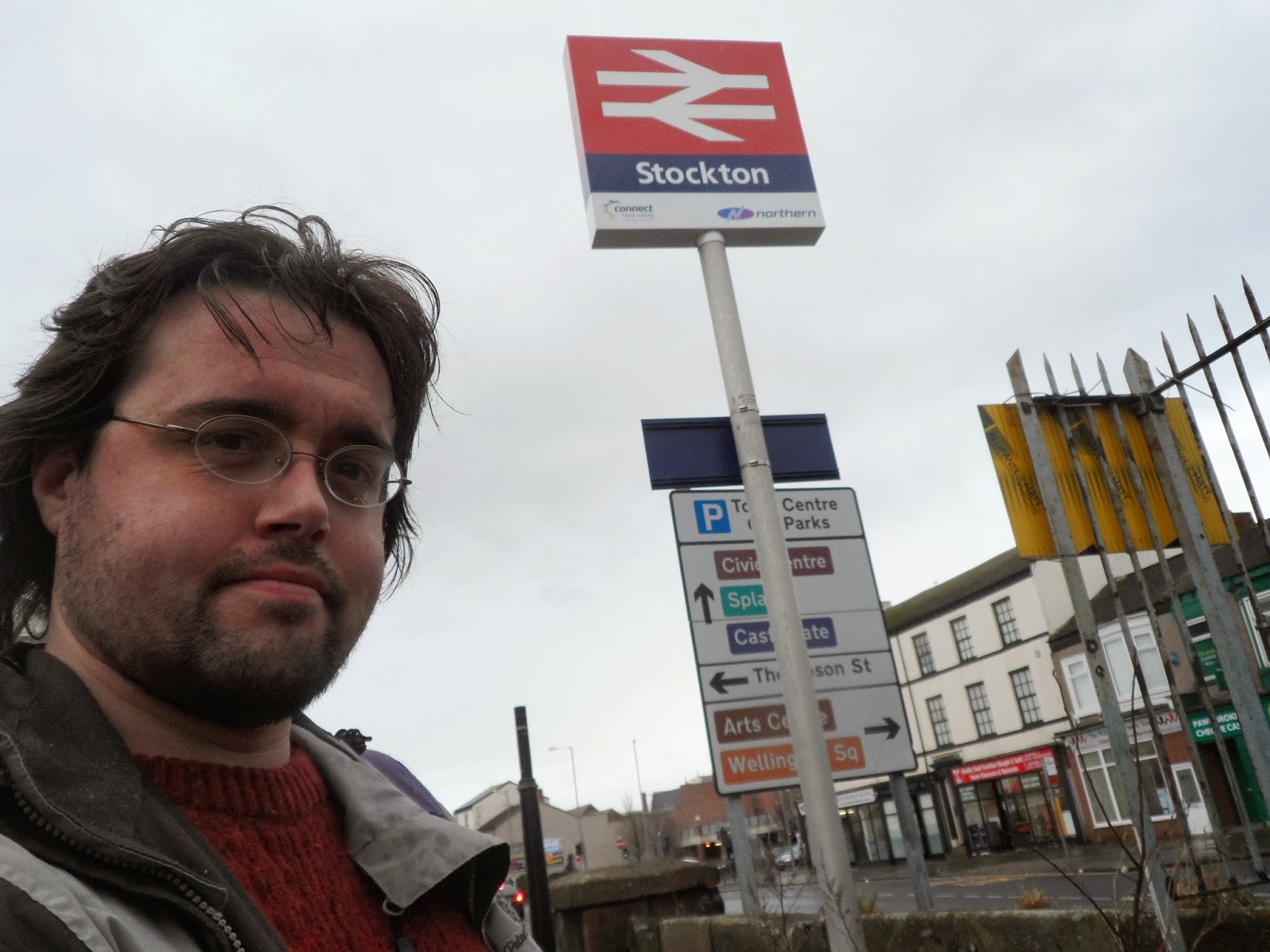 Worse was to come.  The impressive building at Stockton dates from the end of the 19th Century, and is a wide, elegant structure with a station clock.  It's just that it's not actually part of the station any more. 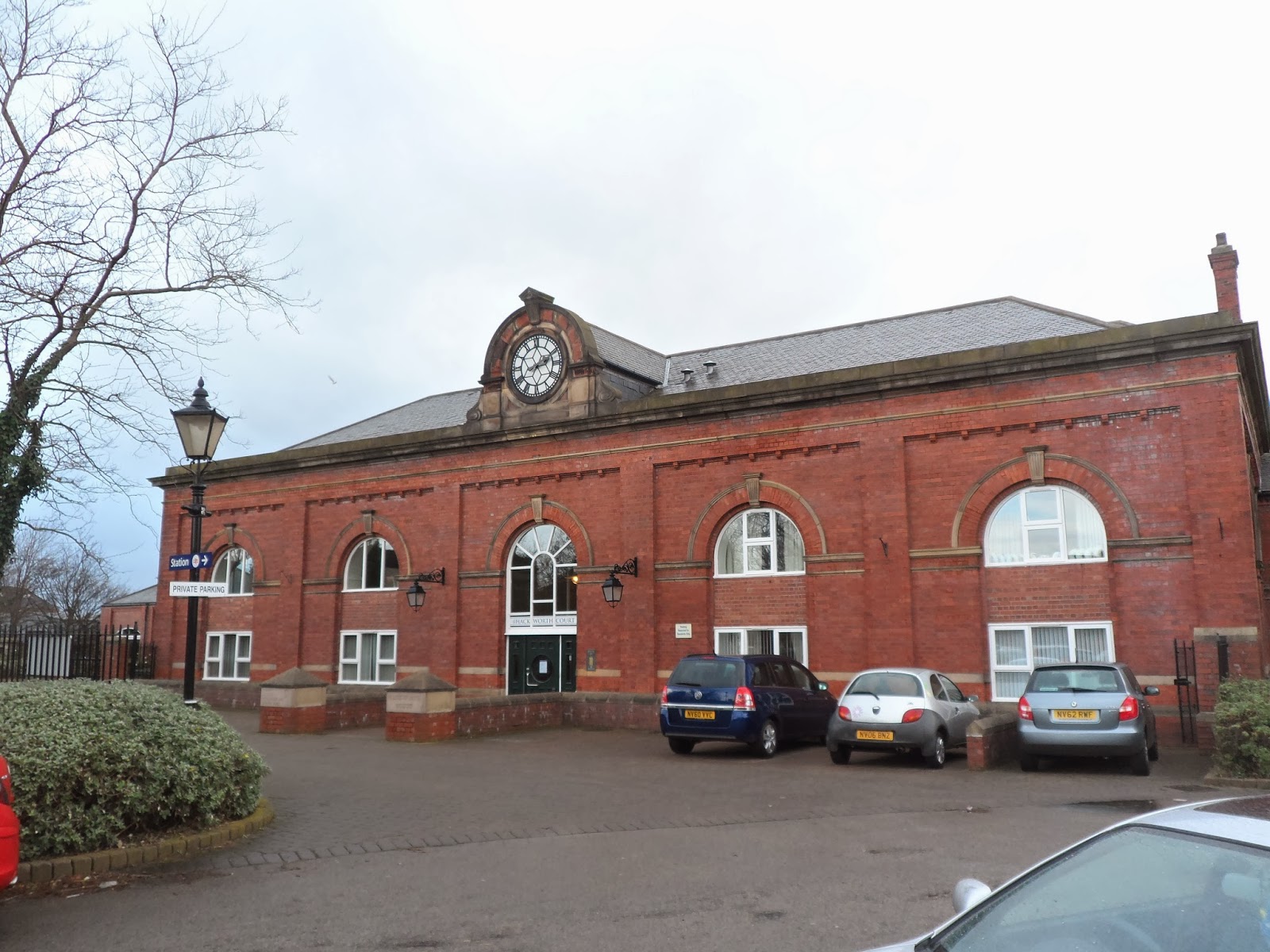 That lovely brick building is now sheltered accommodation for the elderly.  To reach the actual station, you have to walk through the car park (there are no pavements worth speaking about) and down a side alley to access the platforms.  They're almost apologetic, as though they'll happily disappear if you wouldn't mind sending a bulldozer round. 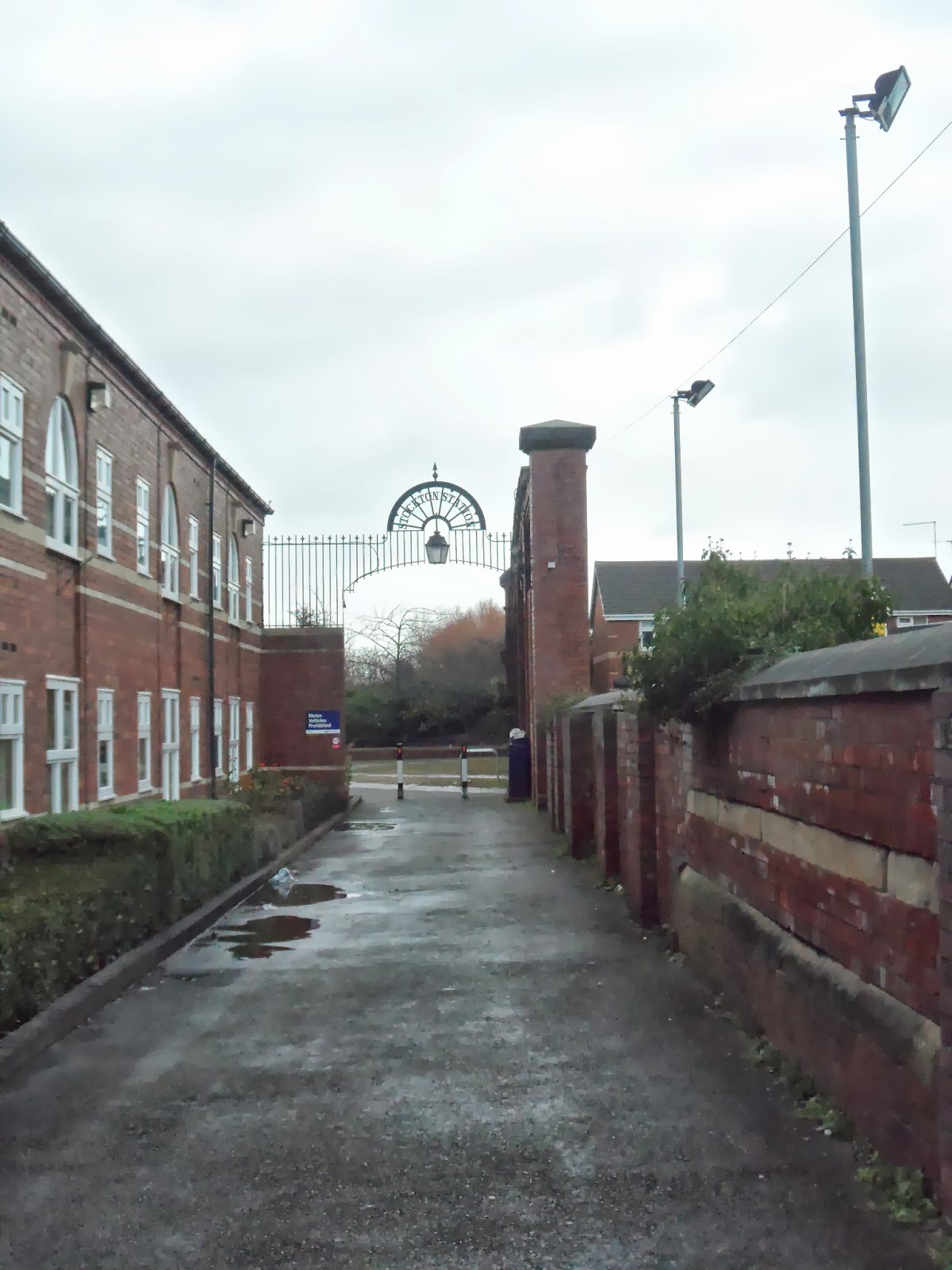 A rat run of ramps and stairs takes you up and over the tracks.  At the top you can see what Stockton station used to be before it was rationalised and cut back. 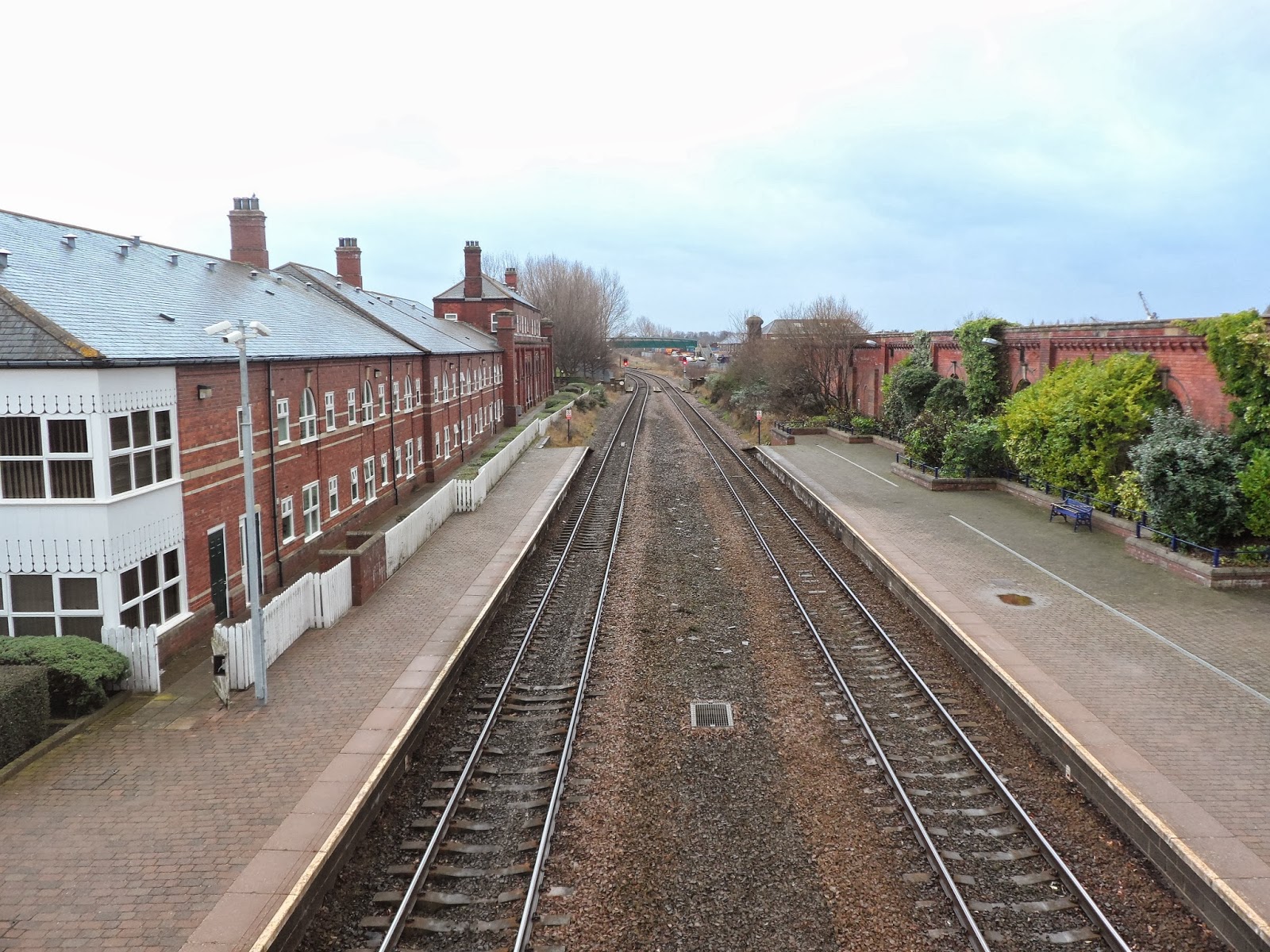 I took a seat in the shelter on the platform, and almost immediately it started to rain.  I stared out at a tower block through the mucky glass and thought, I can't end it like this.  This can't be the last station on today's trip. 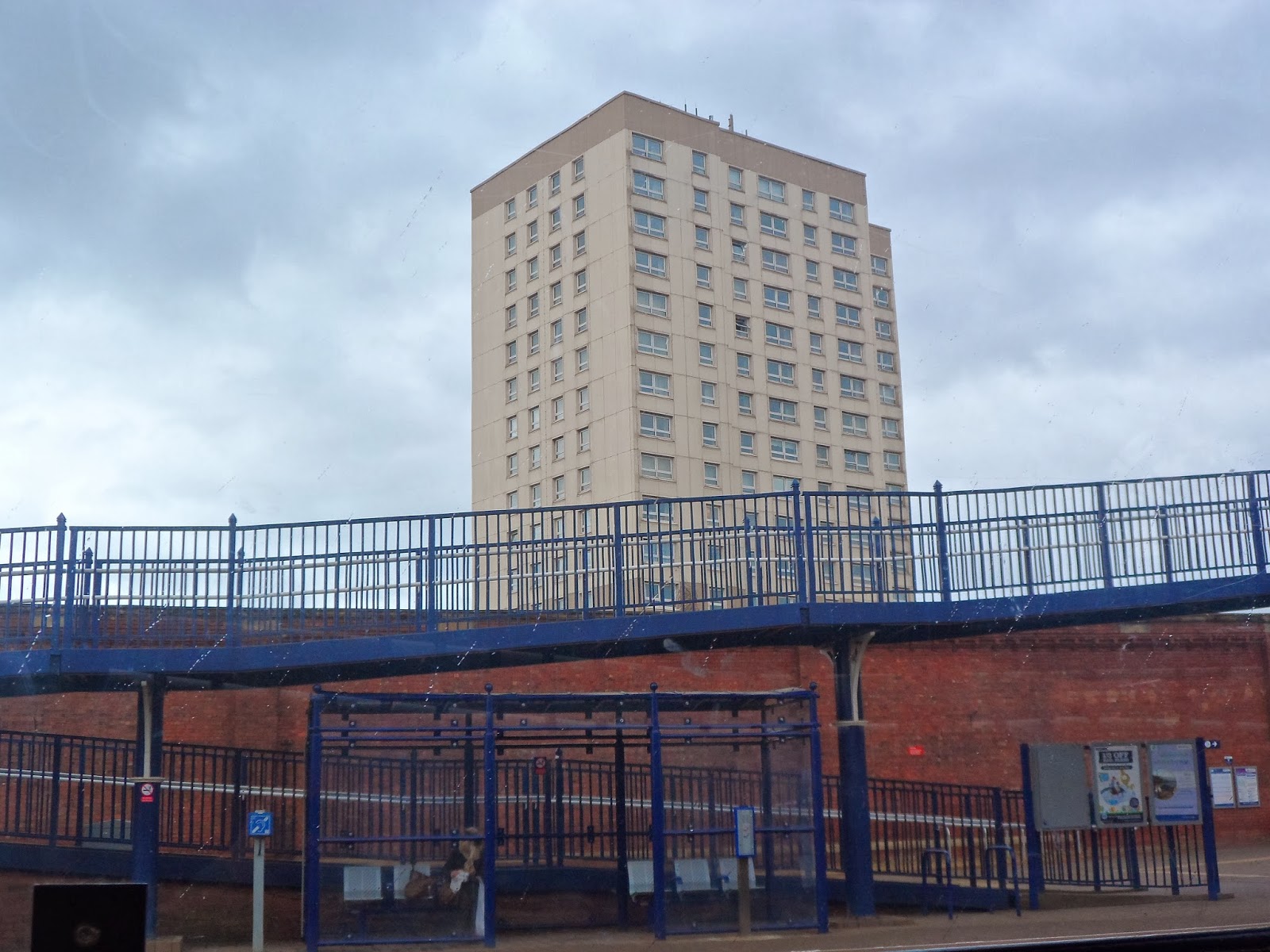 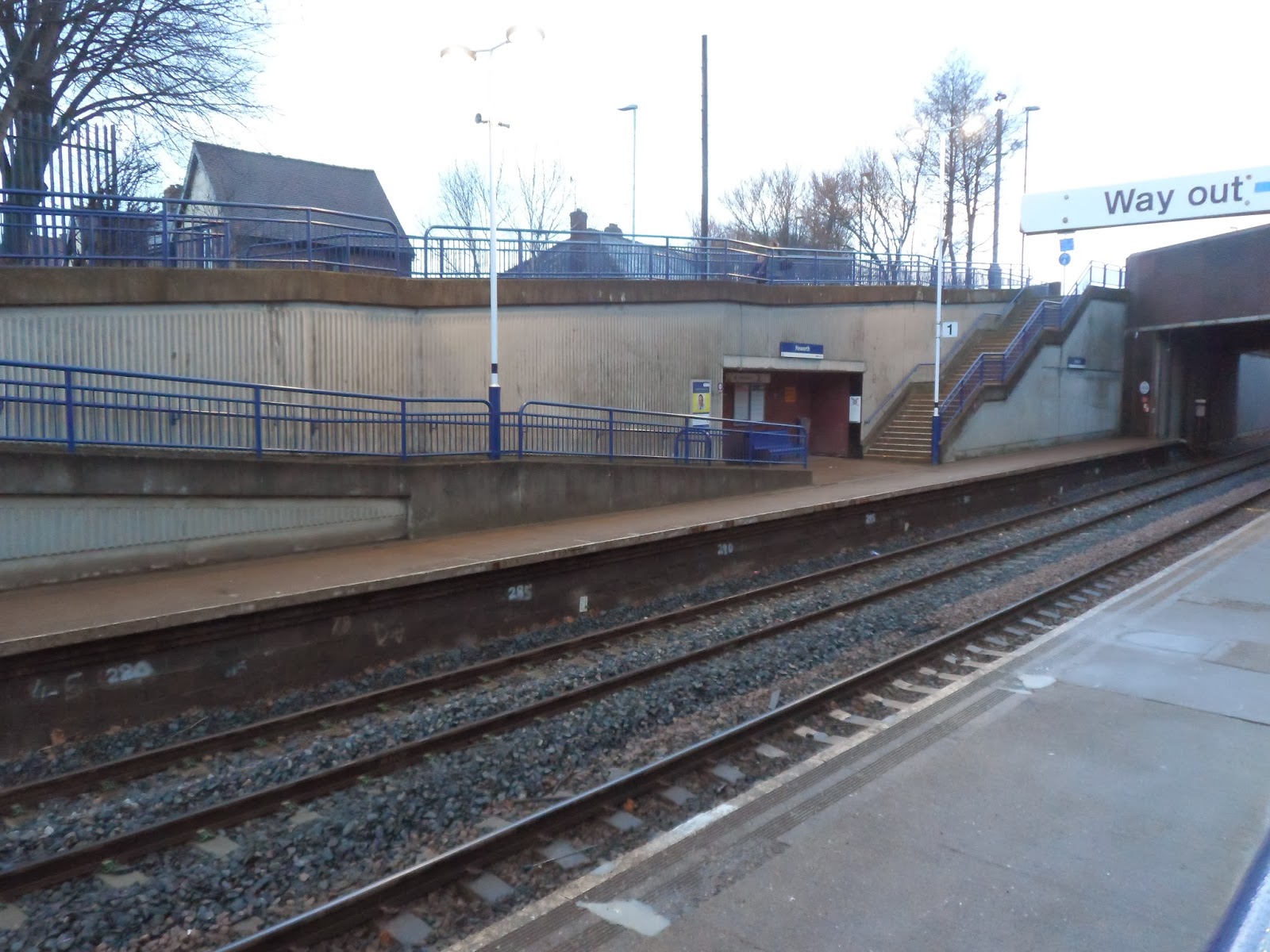 It was the only stop on the Northern Rail line between Sunderland and Newcastle.  I hadn't collected it before in my eagerness to get on the Metro, and I didn't think I'd have time to get it on the way back because I'd assumed I'd have walked from Billingham to Stockton.  That bus meant I suddenly had time to spare.  And what was this beautiful, shining beacon on the platform at Heworth? 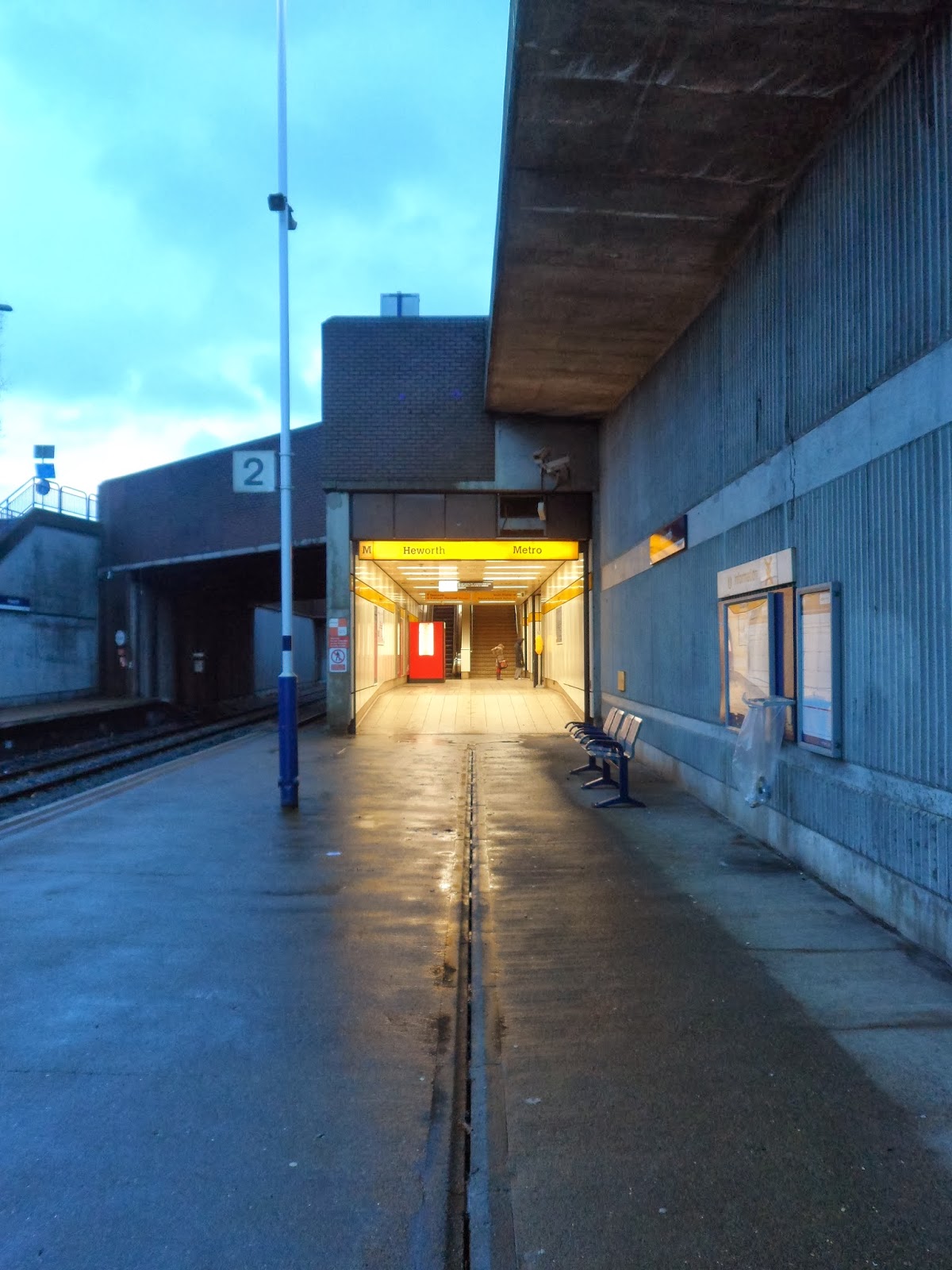 Short of installing a giant neon sign saying This way for lots of free booze and sex, I don't think they could have made the entrance to the Metro more welcoming.  I resisted the urge to run straight in, giggling maniacally, because of course the Rules of the Blog dictate that I have to actually exit the station.  I took the ramp up to street level, where a bus exchange surrounds the Metro station building, and where Margaret Calvert's friendly sign provided a pleasing spot for my selfie. 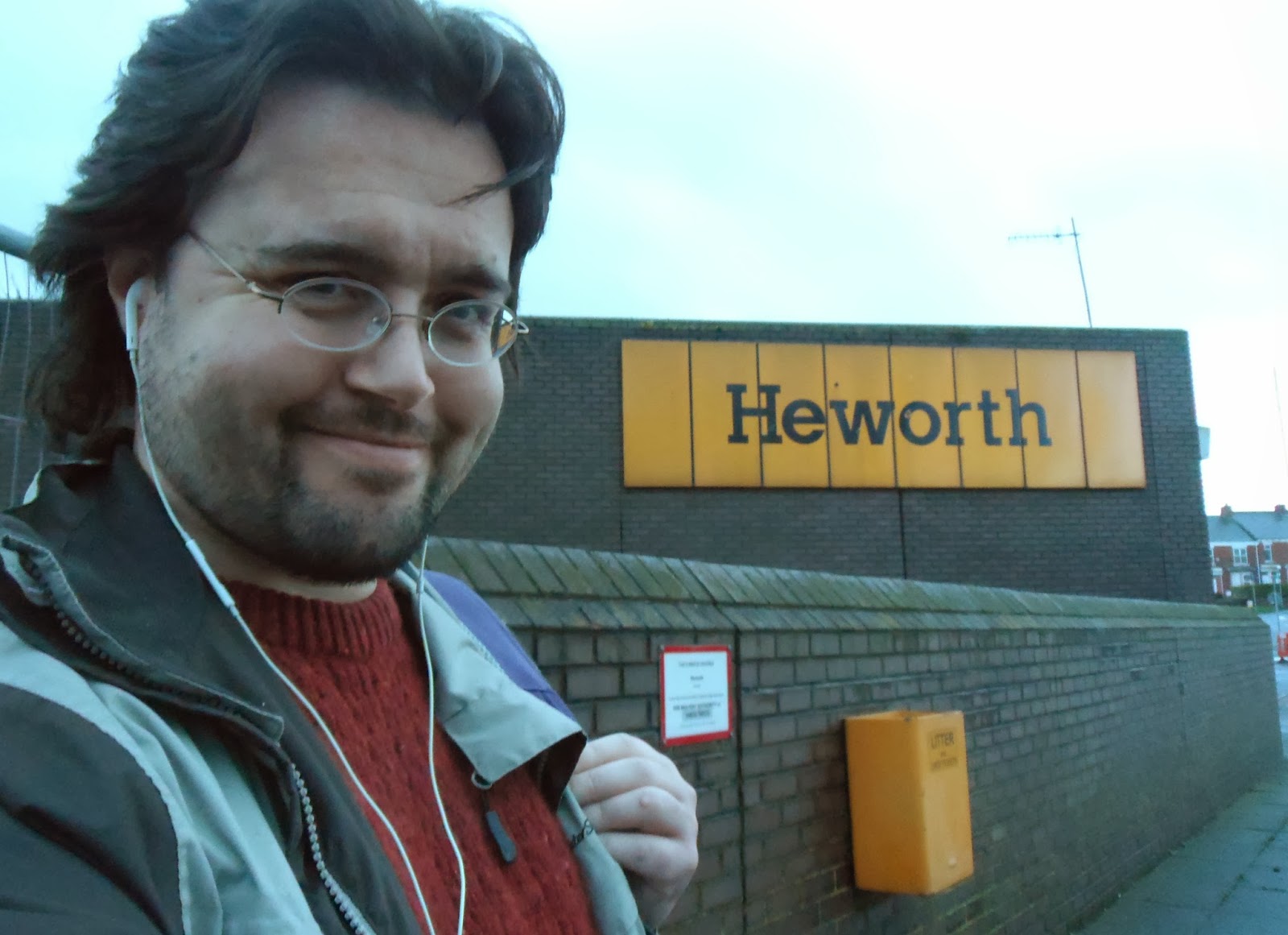 Inside the ticket hall was bright and warm.  It was starting to fill up with kids, rushing from school to the train into town.  I bought a ticket - I'd foolishly only bothered with a single to Sunderland earlier - and headed down the steps to the platform. 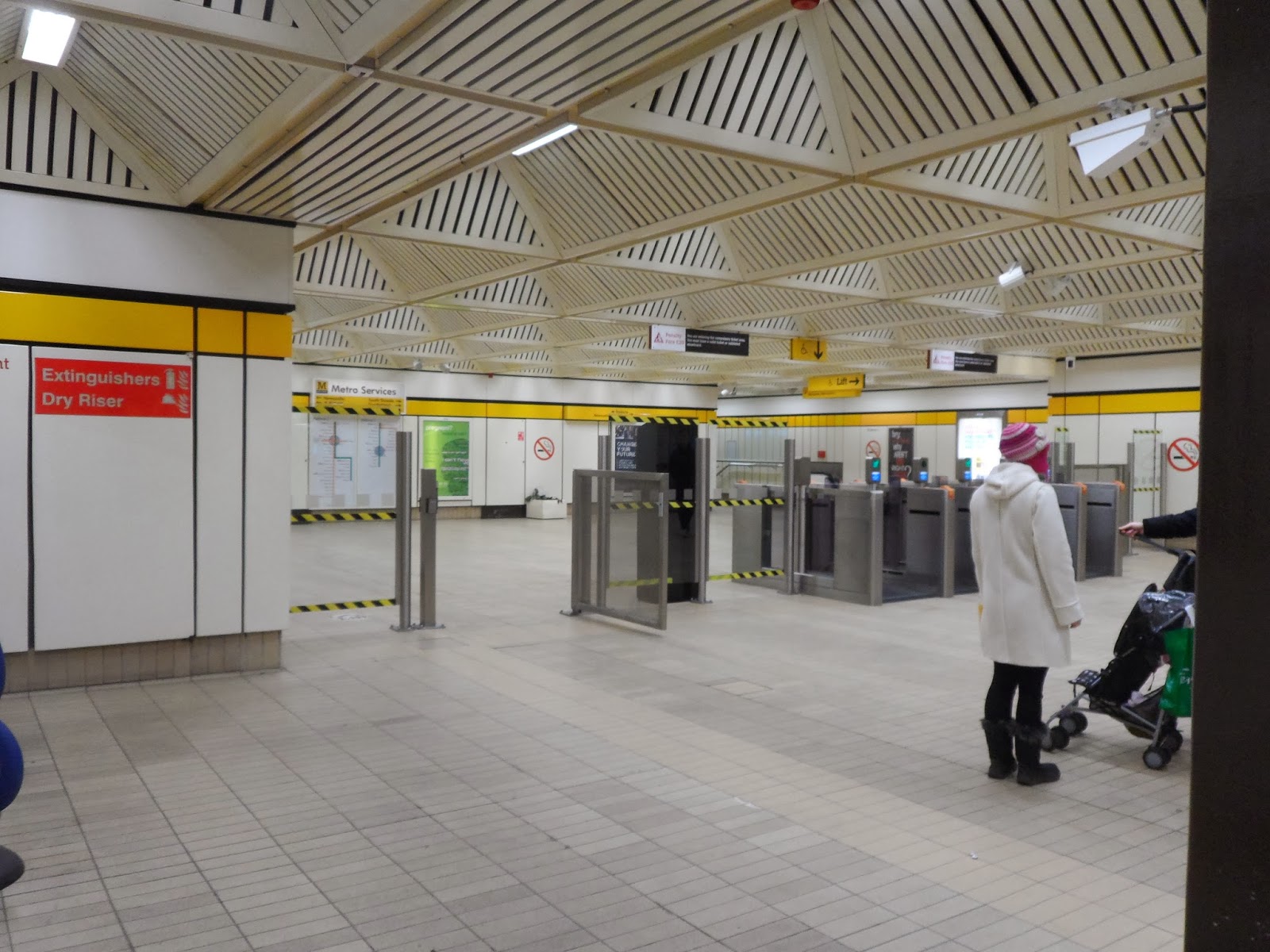 Once again grinning like an idiot, I wandered up and down, just enjoying being there.  I love the Metro.  Properly love it. 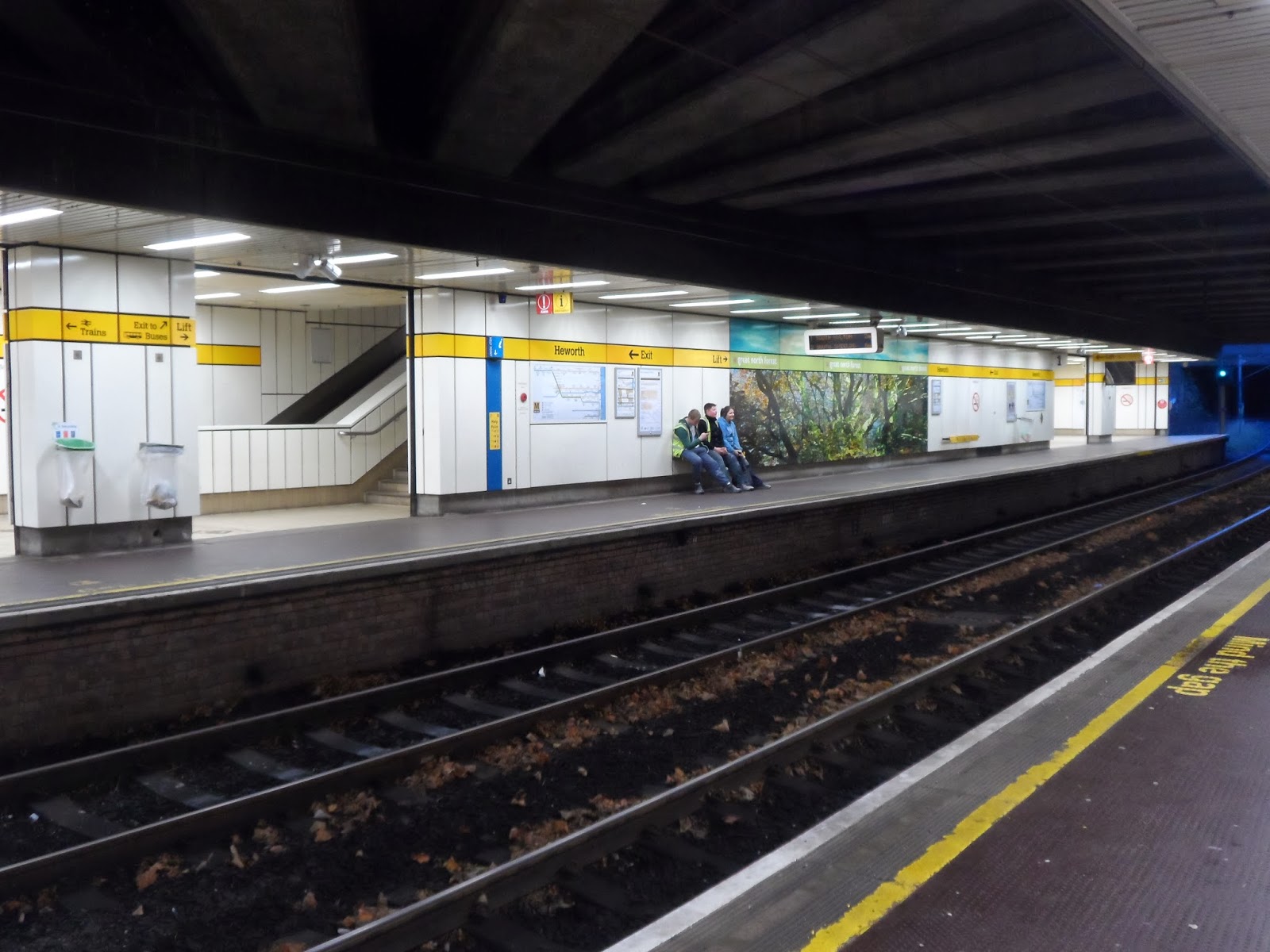 It certainly cheered me after the misery of Stockton.  Soon I was on a little yellow and black train, my foot once again on the hinge, whizzing under the streets and over the river.  There was only one way to finish my day properly.  I walked out of Newcastle Central and into a pub nearby.

I love Newcastle Brown Ale, always have, ever since I used to spend my Friday afternoons drinking it in a pub in Luton after my A-level classes had finished.  It's probably my favourite alcoholic drink and, trust me, I've put in plenty of research.  As a student, it was practically all I drank, until money started getting tight halfway through the term and I'd go onto the cheaper lager.  I'd shared a flat in halls with a Geordie, who'd told me that it's called "Dog" in Newcastle (it being what husbands usually end up with when they tell their wives "I'm just taking the dog out") but I didn't have the guts to ask for it by that name.  Instead I ordered a Newky Brown, and the barman gave it to me with a half-pint glass.  That's how they drink it here; so much classier than me simply necking it from the bottle. 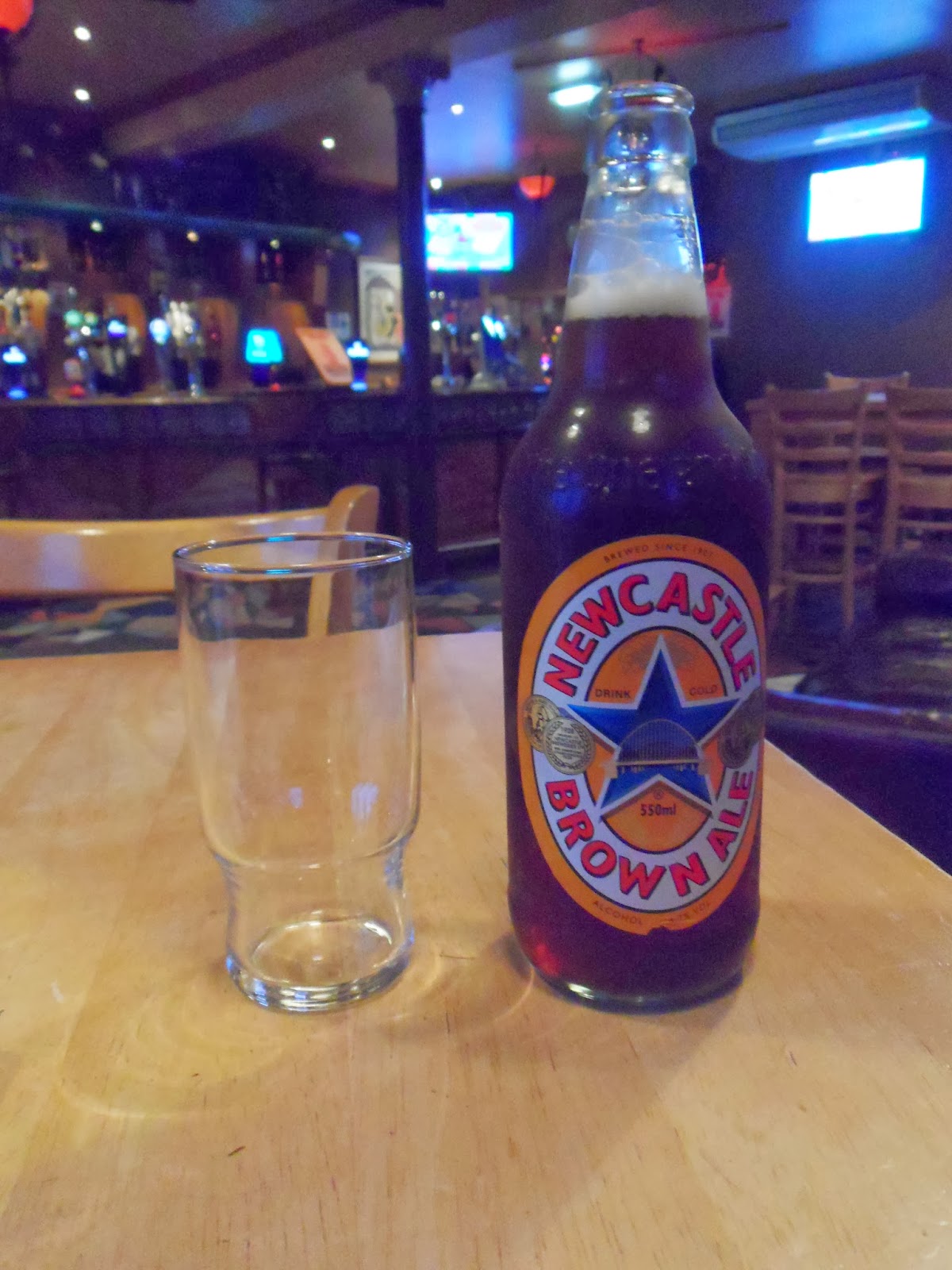 Newcastle: home of a superlative metro and an astonishingly good beer.  I may just retire there.

Here's a fun trip. Go to a pub with a native Geordie, somewhere outside of the North East. Order a bottle of Dog.

Watch their amazement and incomprehension that it's come with a pint glass.

At their insistence, when you next get some Dog, ask the bar staff for a half pint glass.

Watch their amazement and complete incomprehension that you want it to come with a half pint glass.

I speak from experience on this one. The other one is to ask a Northern barman to remove the Sparkler from the handpump (the little white thing that makes the beer have a smooth, creamy "Northern" style head.) They don't get that at all, even when you say "Well that's how London Pride's supposed to be served!"

Billingham has always been a dump. It used to smell totally evil due to the ICI chemical plant, but I expect that's closed. Back in the late 70's/early 80s, the whole of Teesside was one vast industrial zone, belching fumes, hot, steamy, smelly. But at least making money and providing jobs.

Stockton was smart then; smarter than Middlesbrough (which in turn was way better than it is now). God knows what's happened to it: it looks like so many Northern towns that had its heart ripped out. Personally, I date its demise to the removal of the overall roof and then the staff at the station. Middlesbrough got the one spot as Tees-side's main station (there was briefly a direct HST daily to London!) and that was that.