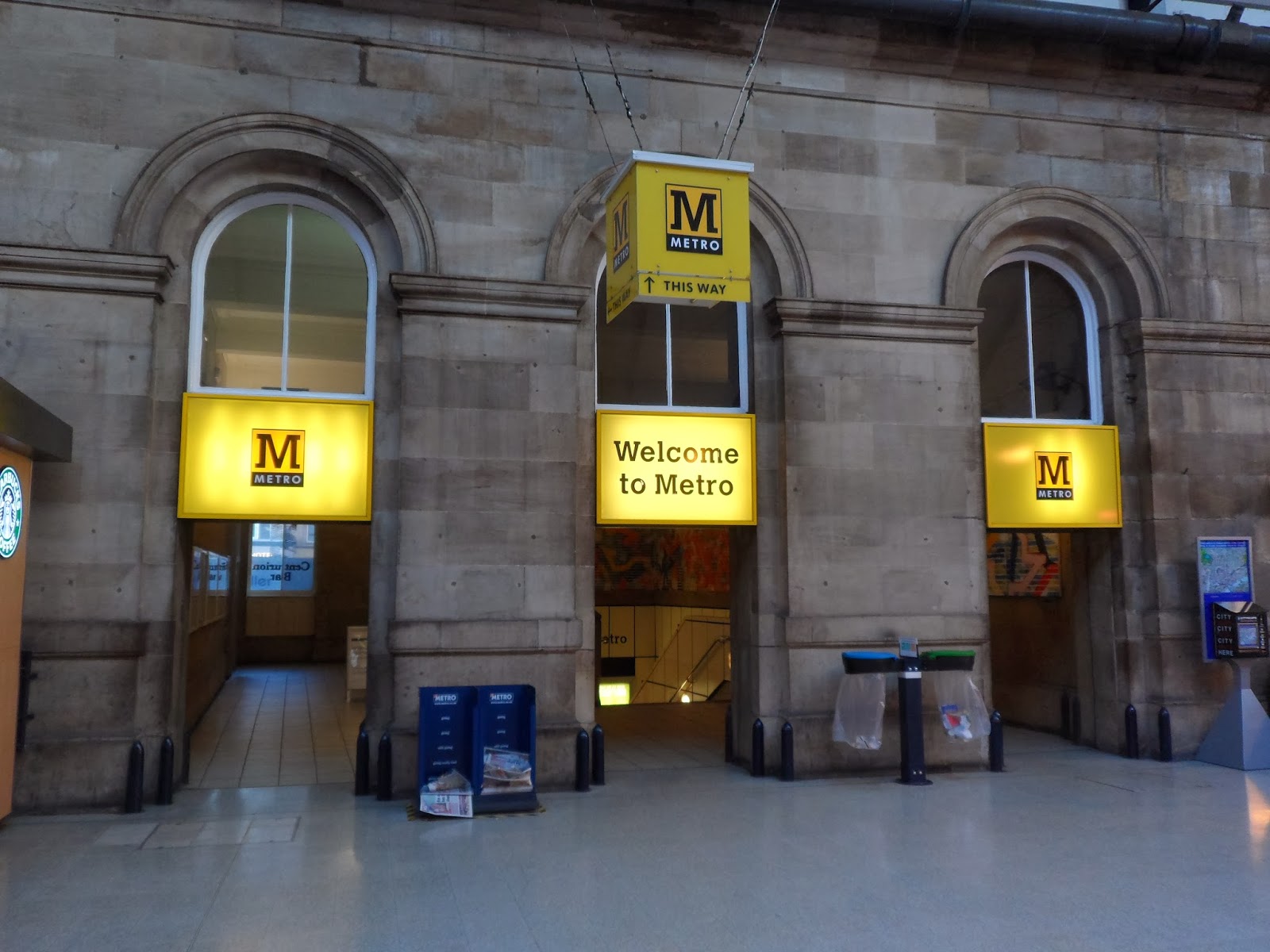 Oh, Tyne and Wear Metro!  I've loved you from afar for so long.  Ever since I spotted a map of your 1980s network in my Dad's AA Road Atlas I've yearned for you.  One of only three proper metro systems in the UK, along with the London Underground and the Glasgow Subway.  Yellow trains and stations and special fonts and... so exciting! 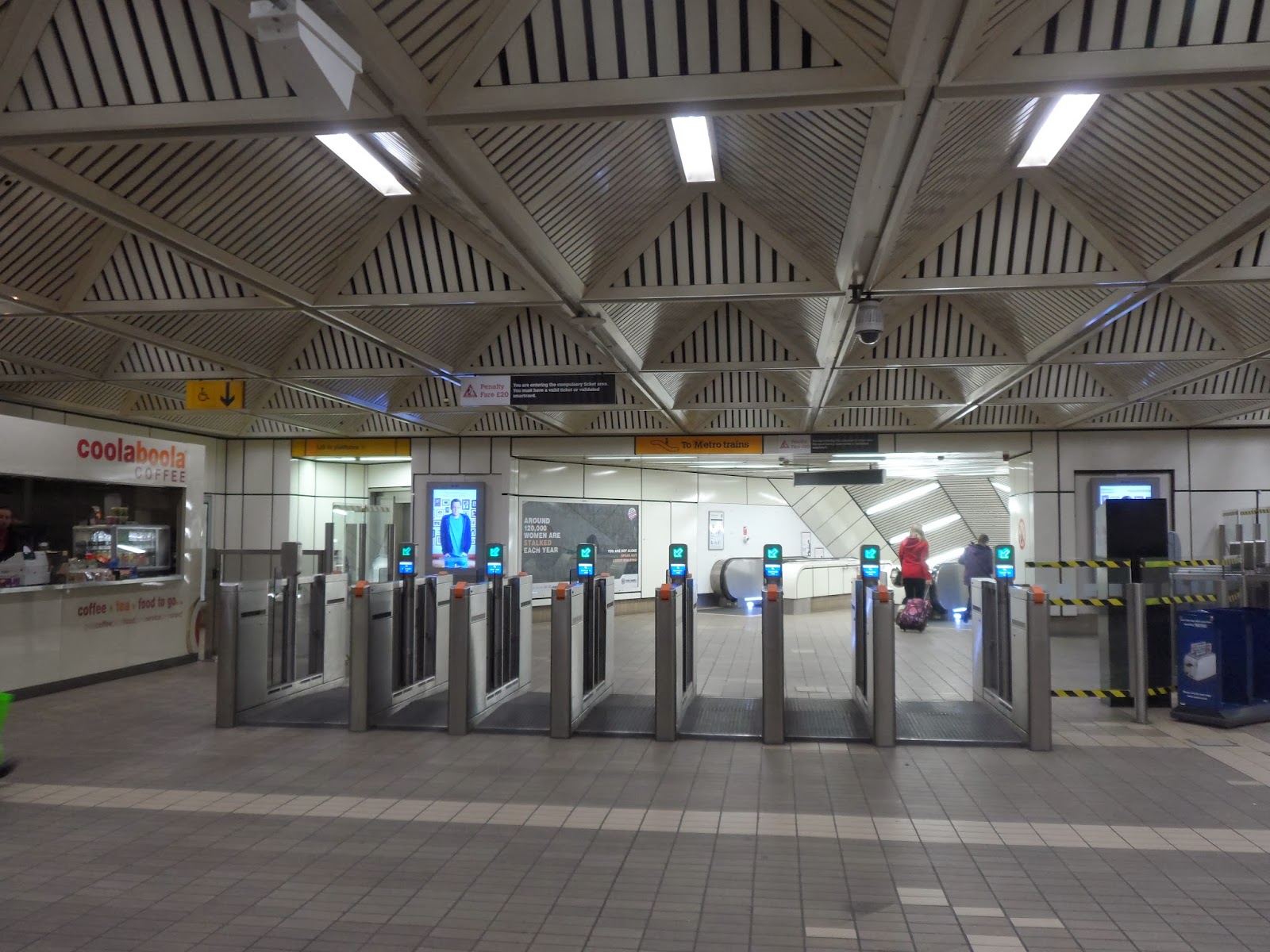 I was in Newcastle to collect regular, boring old Northern Rail stations (not really - I love you too Northern Rail, just in a different way).  Rather than take the fast train from Central to Sunderland I plunged into the underground, giddy with excitement at finally getting to ride the Metro after all these years.  I'm not kidding, either - this was my face for much of the journey: 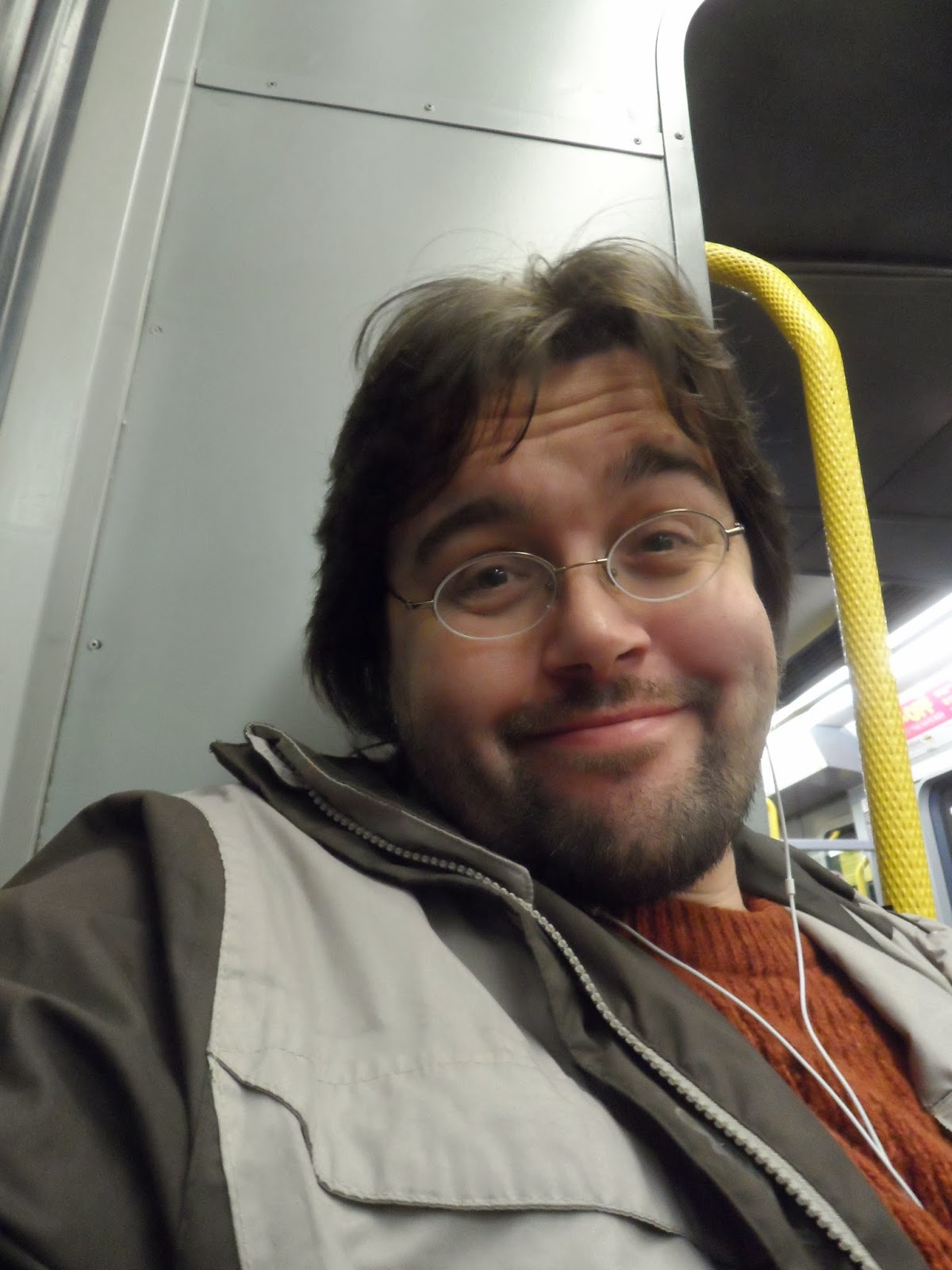 The Tyne and Wear Metro was born out of a desire to upgrade the existing heavy rail network in the county and make it more useful for the late 20th Century.  As with Liverpool, the answer was to segregate the local lines from the national ones and to send them into tunnels under the city centre.  Merseyrail got the Link and the Loop; Newcastle got a cross formation, leading to the Metro's odd "pretzel" layout, which means a single train passes through Monument station twice on two different levels.

In many ways, the Metro was the precursor to London's Docklands Light Railway.  The electric trains were smaller and lighter, and ran to simple unstaffed halts with machines selling tickets.  When it opened in the early eighties, it brought a swift, exciting new form of transport to a region of the country suffering from unemployment and poverty.  I can still remember seeing it appear on Byker Grove, and feeling deeply envious of its bright yellow trains and quick services into the heart of the city.  The closest Luton ever got to its own underground was the system I plotted out on a street map in my spare afternoons.  Tyneside's network looked amazing. 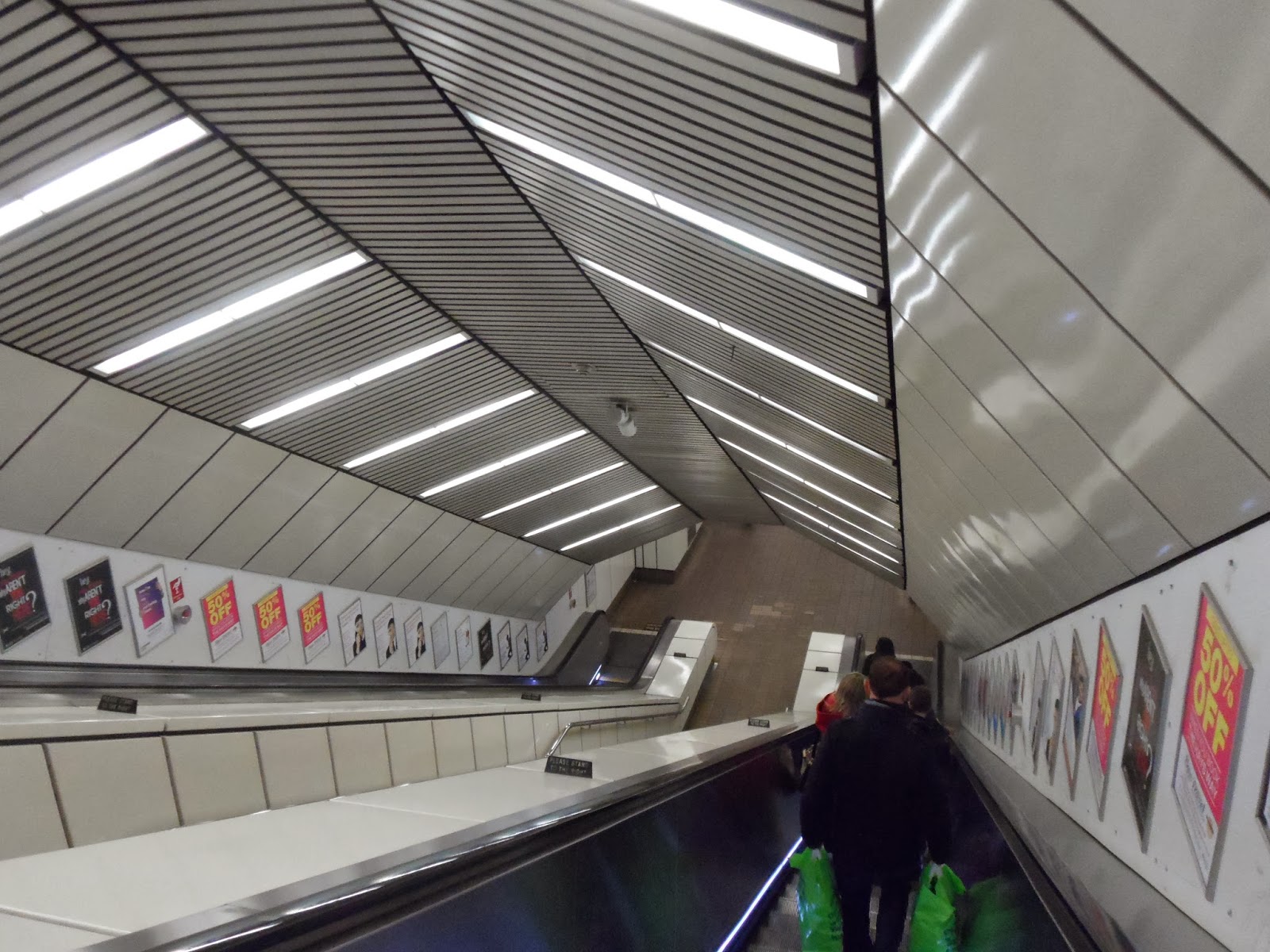 Thankfully, experiencing the network for real wasn't a let down in any way.  The Tyne and Wear Metro really is a fast, efficient, sexy transport system.  Central Station was a little bit dated, a bit like the Merseyrail stations before their revamp, but it was still bright and cheerful: no brown plastic sucking the light away. 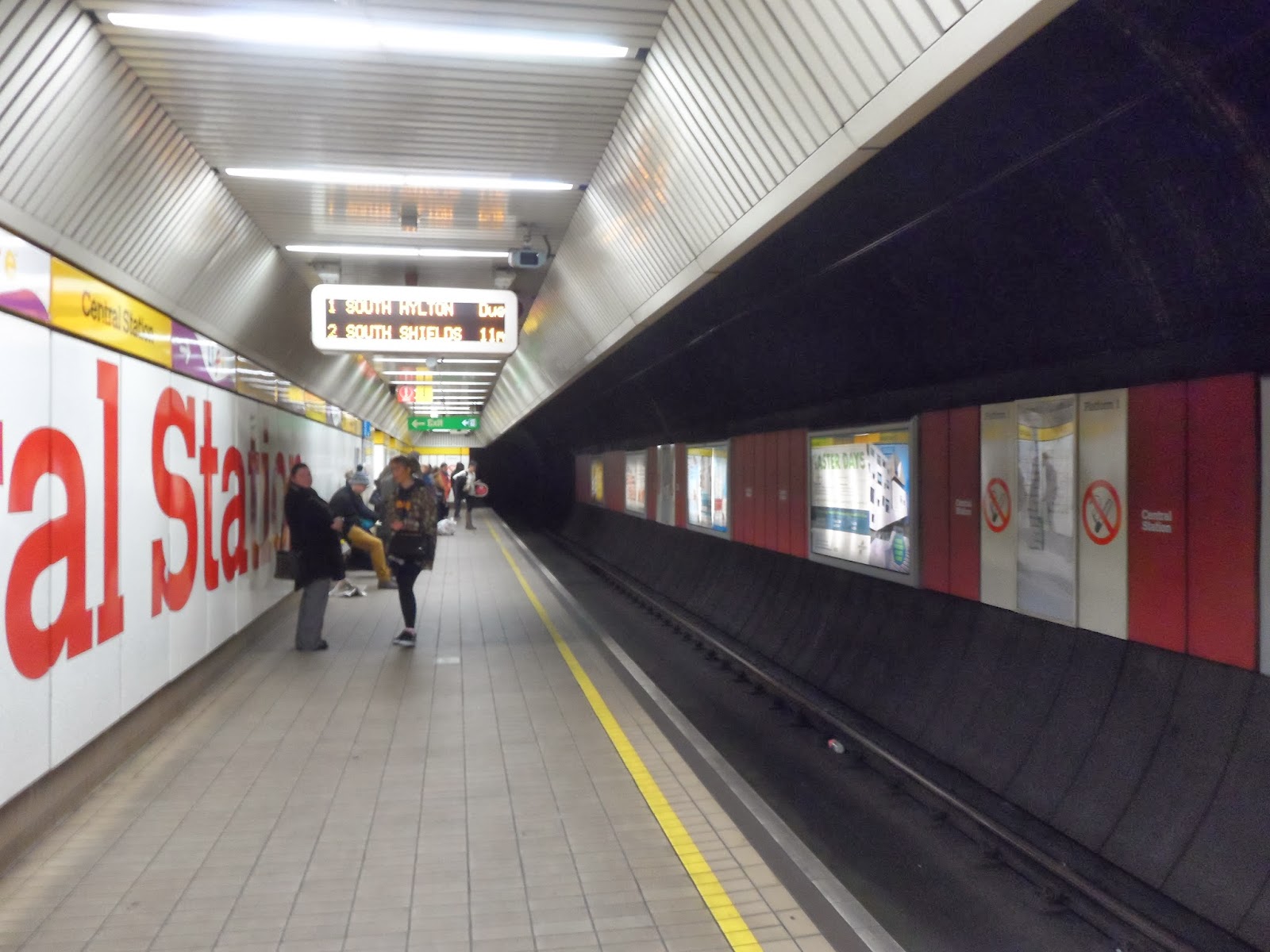 There was also that great corporate identity: the Calvert font, invented by the legendary Margaret Calvert and used throughout the system.  As is right and proper, the Calvert font has come to represent the city itself, just as Johnston does for London or Parisine does for Paris.  Nexus, the local transport executive, dropped it for a little while, but I'm pleased to see it's back in force.  Especially now that Tesco have stopped using something very similar and cheapened the brand. 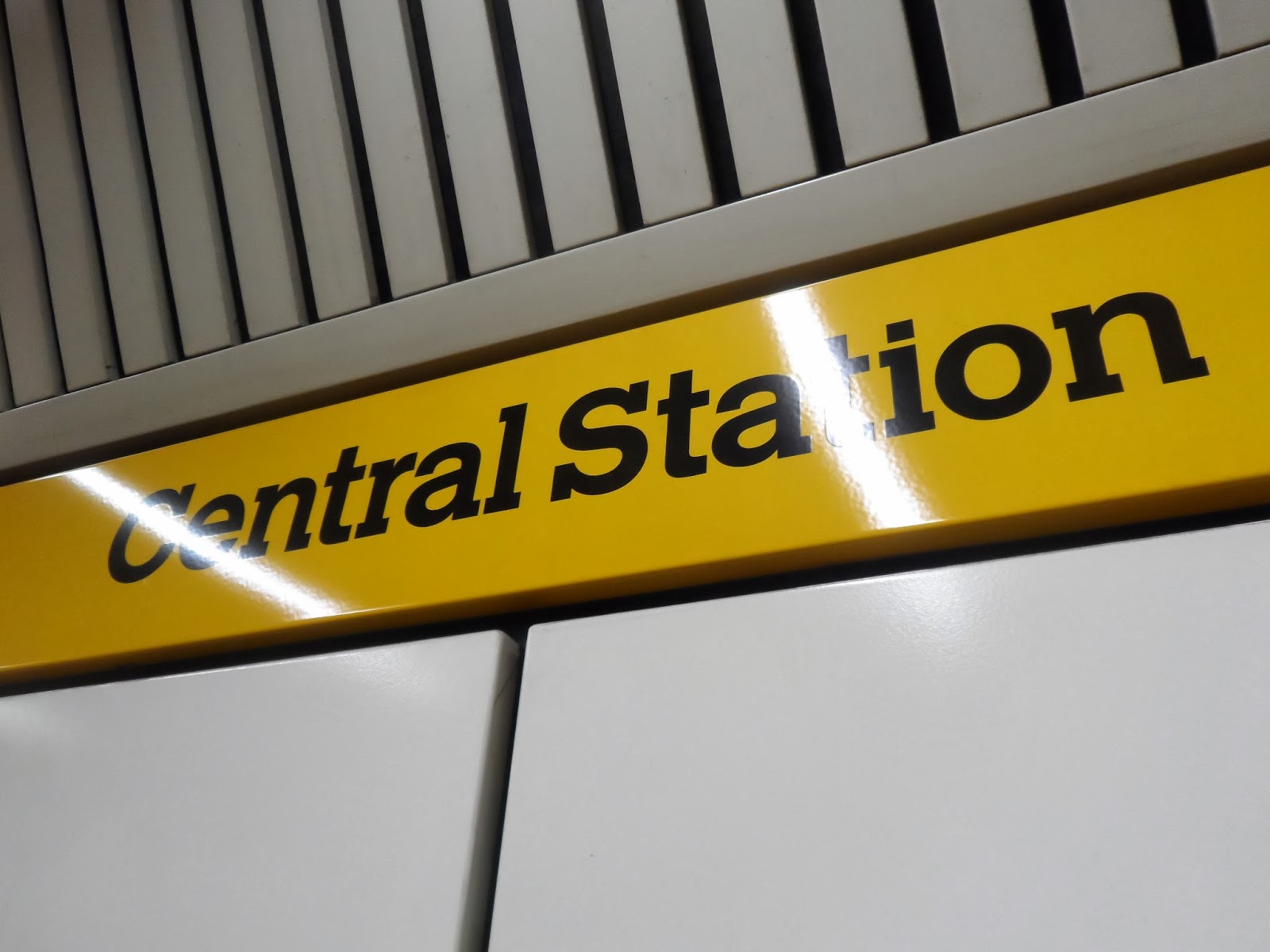 The train clattered into the station, surprisingly noisy, and I found a seat.  It was on the hinge, the best place to sit on any train articulated in the middle, and I snuck a foot onto the circular floor plate so that I had one leg moving independently from the rest of my body.  We entered the tunnel, then for a few brief moments we were high above the Tyne on the QE II bridge.  I got a tantalisingly brief glimpse of the grey river and the arcs of the city's other bridges before we hit another tunnel on the Gateshead side. 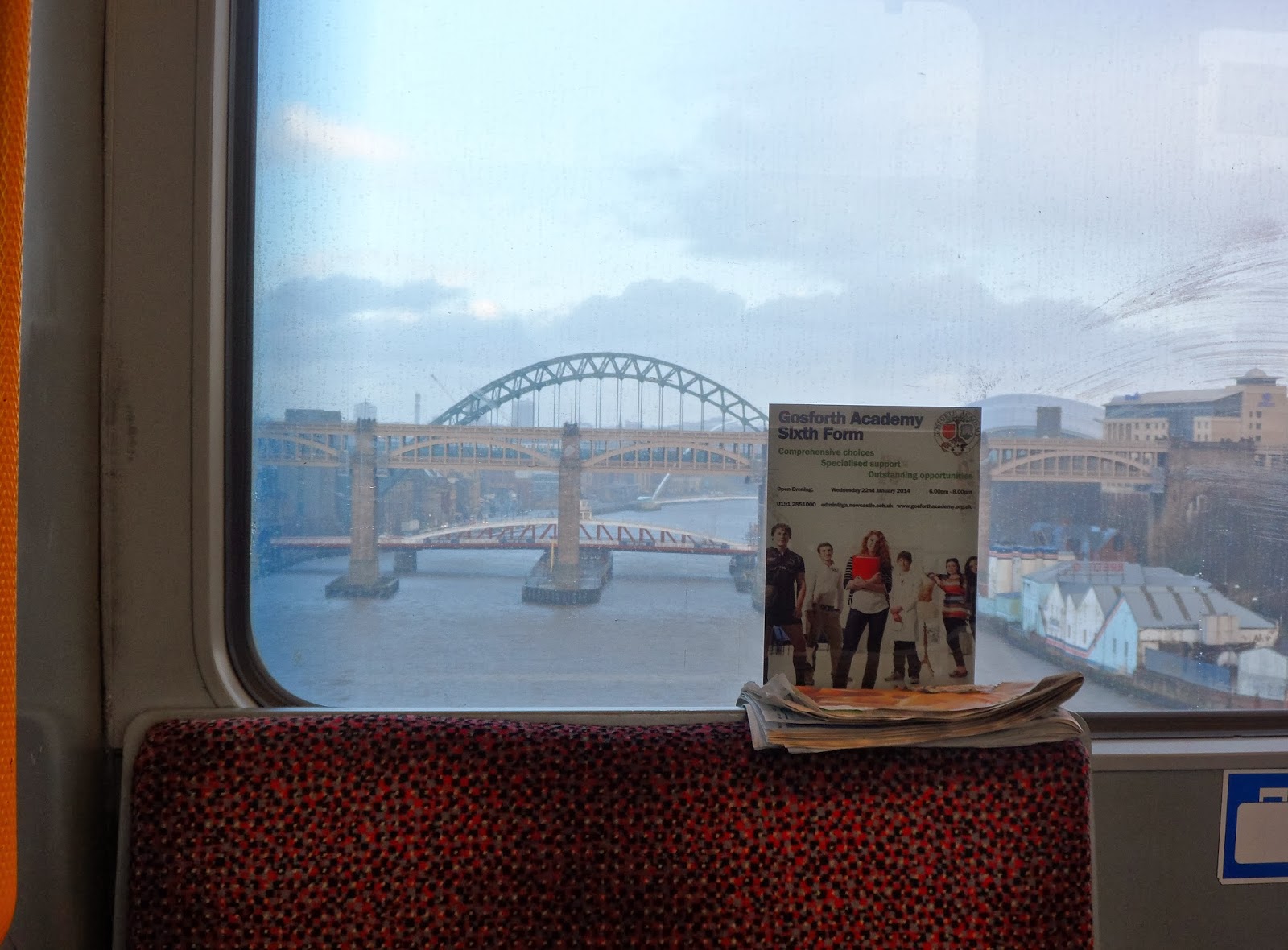 The train felt oddly wide and spacious, like a European train instead of a British one.  I could have been in Prague or Berlin.  It was past the rush hour so the carriage was filling with students, pensioners, mums with buggies.  People using their cheap day tickets. 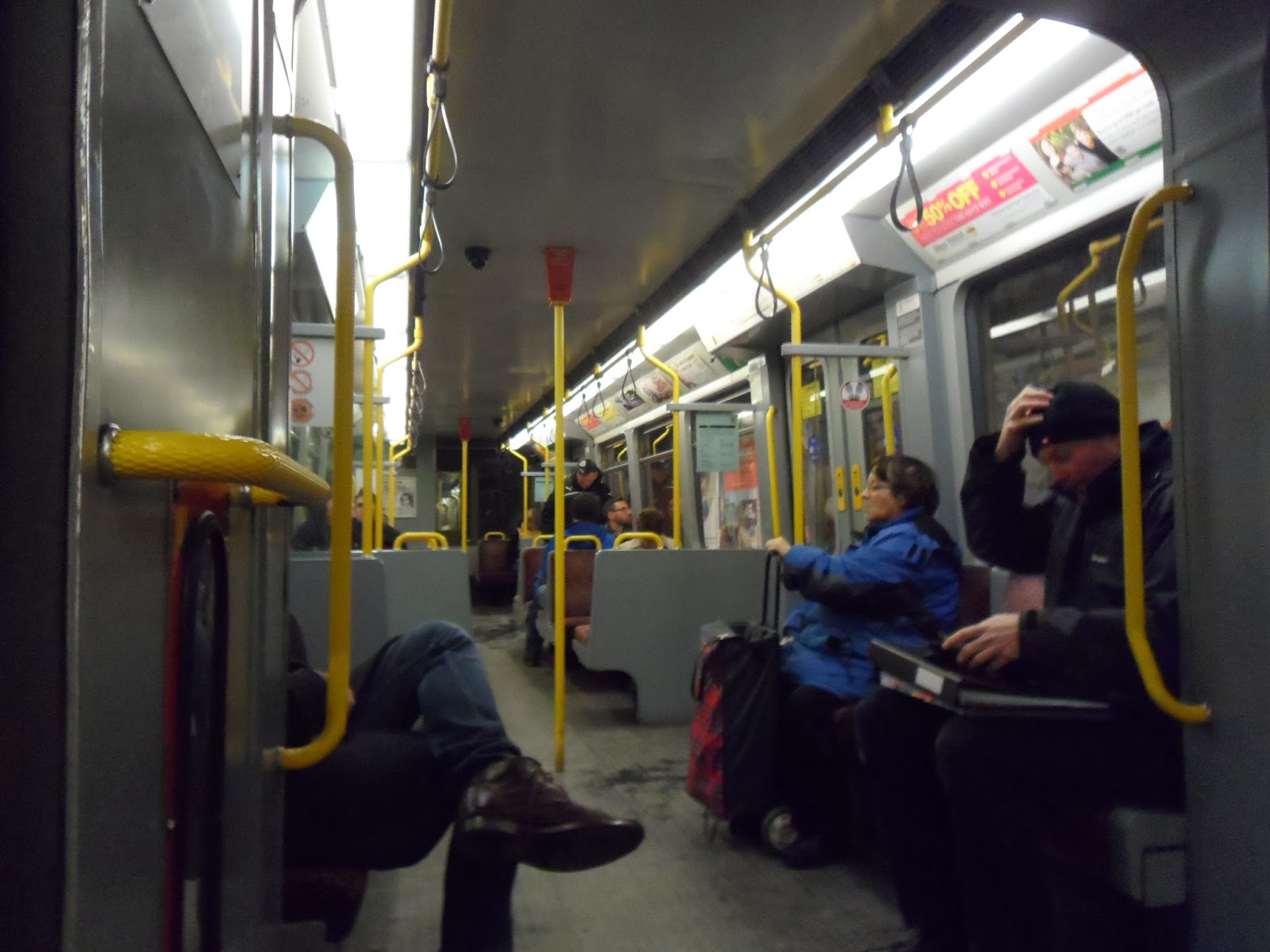 After Gateshead, we were back out in the open air, calling at little halts with curved metal roofs over the platforms.  Pelaw was the last station before we turned onto the Sunderland extension, opened in 2002.  Just when I thought that the Metro couldn't get any better, the man next to me broke out a copy of the latest James Bond book, Solo, proving that Tynesiders have excellent taste in reading as well as public transport. 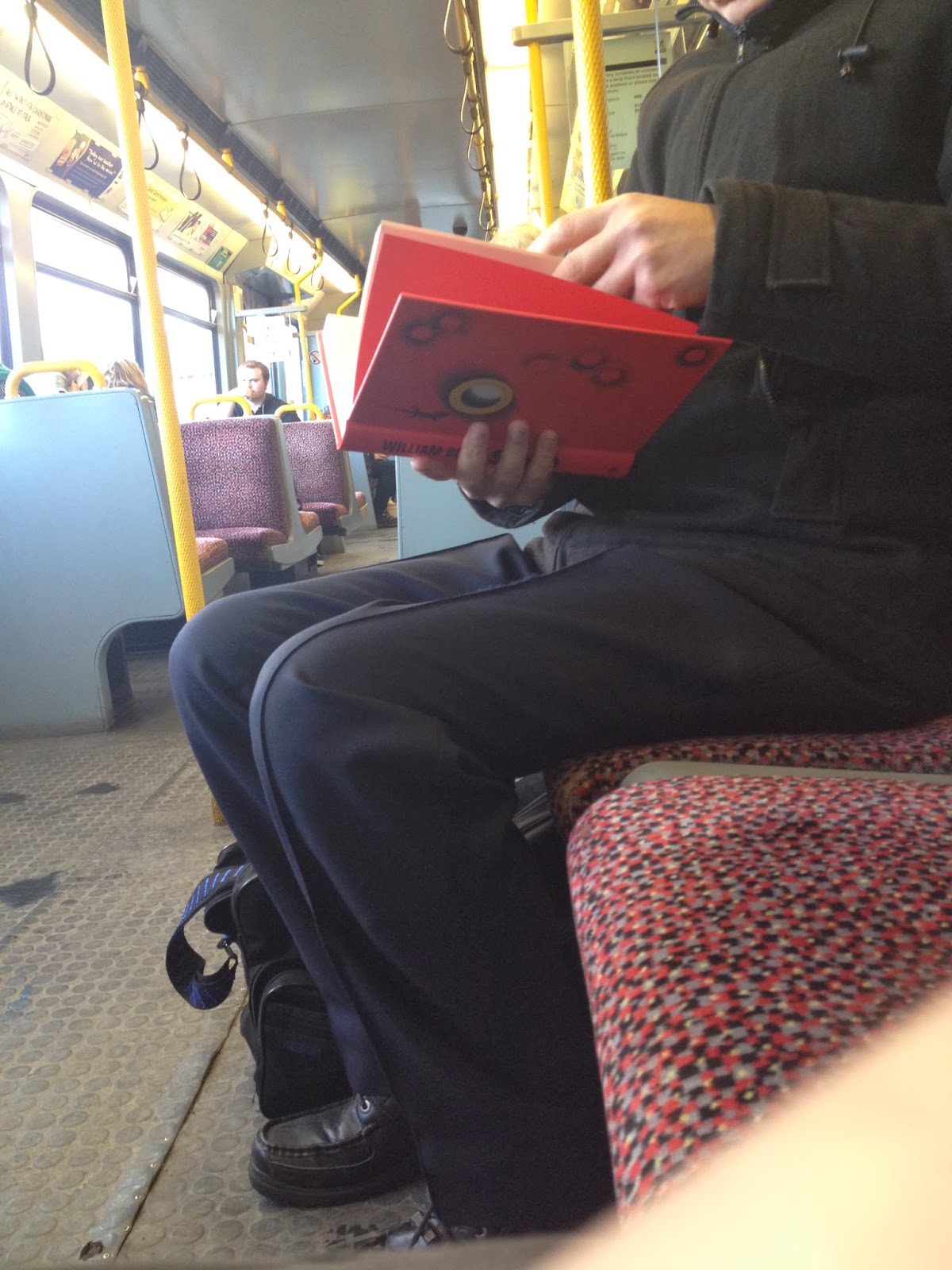 SIDEBAR: I haven't actually read Solo.  I got it for Christmas, so it's on my shelf, but to be honest, there hasn't been a decent James Bond continuation novel since about halfway through John Gardner's Death is Forever.  After that, you could sense he was doing it just for the money (I'll just say "MicroGlobe One" and leave it there).  Raymond Benson couldn't write for toffee, though I bought his first three books in the hope they'd get better; they didn't.  Devil May Care was dreadful, and I still haven't managed to finish Carte Blanche; the glamourous location of an enormous recycling plant in East London was just too much for me.  I'll read Solo someday, even though a title ripped off Ian Fleming's original notes for The Man from UNCLE doesn't fill me with confidence.  The only good Bond books written since 1993 have been Charlie Higson's Young Bond series, which are superb adventures, tightly written and full of 007 lore - I can't recommend them enough.

SECOND SIDEBAR: I wonder why he took the dust jacket off? 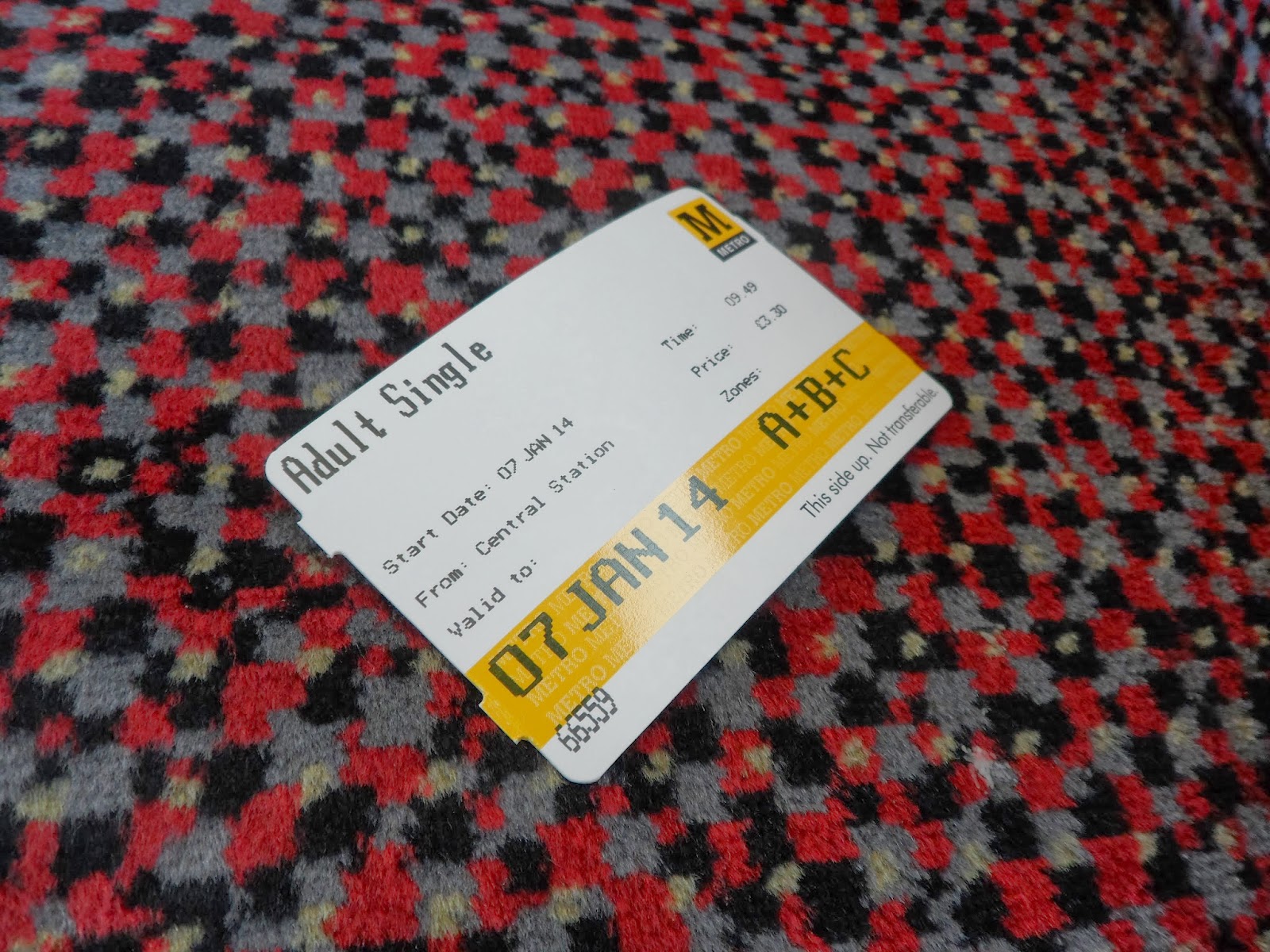 The route out to Sunderland is far more rural, like the Northern Line to Southport; lots of fields and country lanes with the occasional station and level crossing.  I could see why the Sunderland extension hasn't been as successful as they'd hoped - the levels of population just aren't there, and it's far quicker to get a proper train from one city to the other than the stop-start Metro.  Meanwhile, I commemorated this important occasion by putting some superlative pop music on my iPod, because I'm just that predictable. 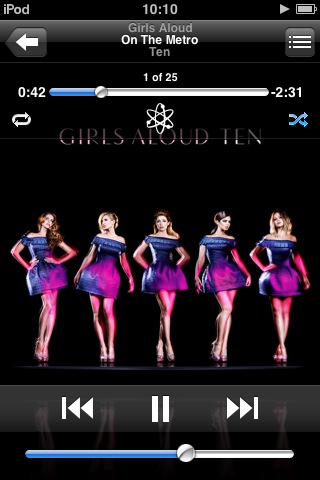 The extravagantly named Stadium of Light heralded our arrival on Wearside, then we were passing round the back of Monkwearmouth Station Museum to St Peter's.  It's a shame they couldn't bring the old station back into use - the platforms are still there - but then we were over the Wearmouth Railway Bridge, like a low-budget version of the Tyne crossing, and into Sunderland station. 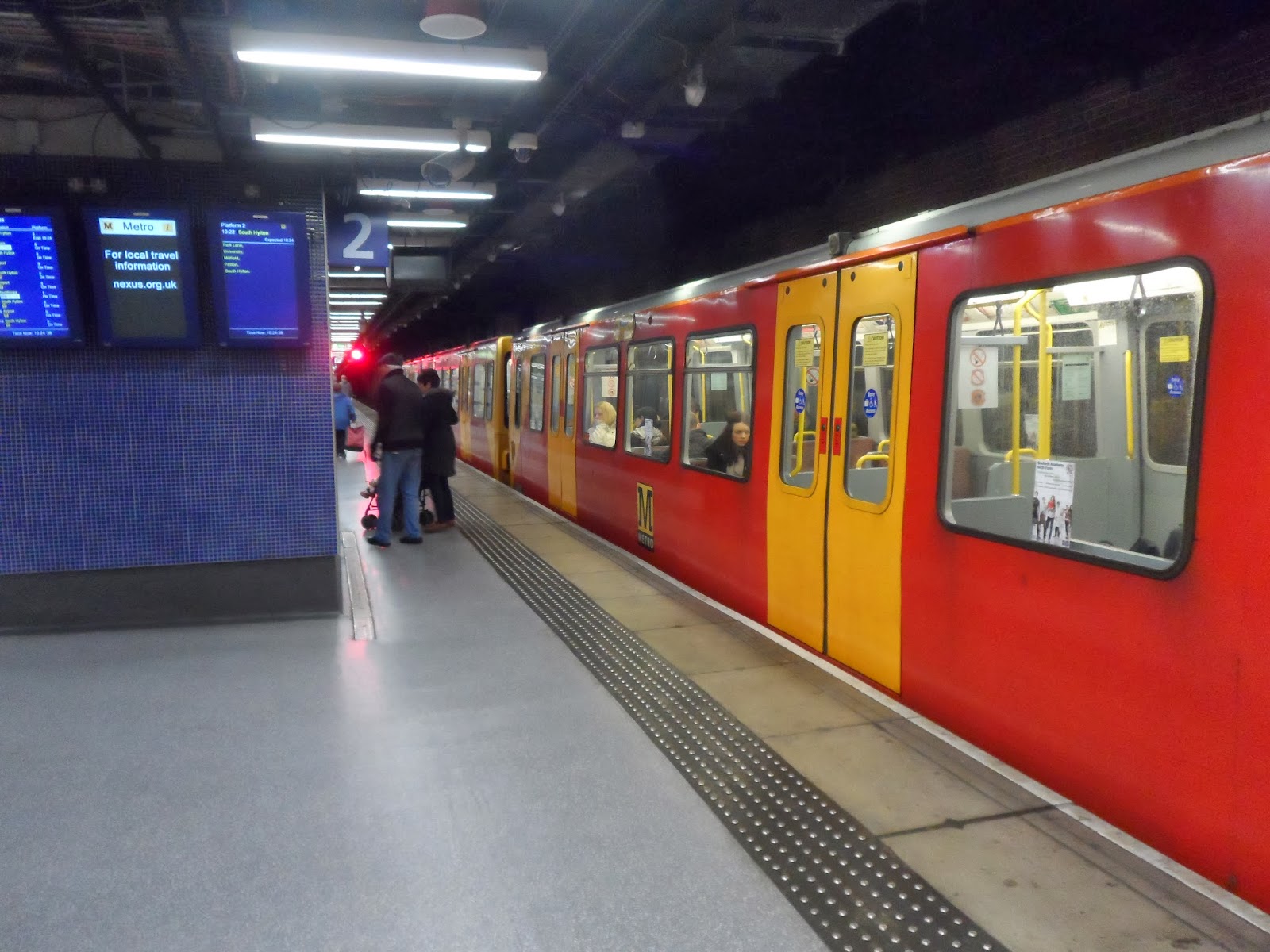 I only had about 20 minutes until my next train south, so I didn't really get to see the best of Sunderland city centre.  What I did see reminded me of Birkenhead; a shopping centre that's really doing its best to carry on and ignore the enormous gravitational pull of a much larger city nearby.  There were pedestrianised streets and a couple of malls, but there were a lot of pawnbrokers and pound shops.

I really only had time to see one of Sunderland's major tourist attractions.  I passed up the opportunity to visit the local museum, or take in a river view, and instead I hunted down a local off licence. 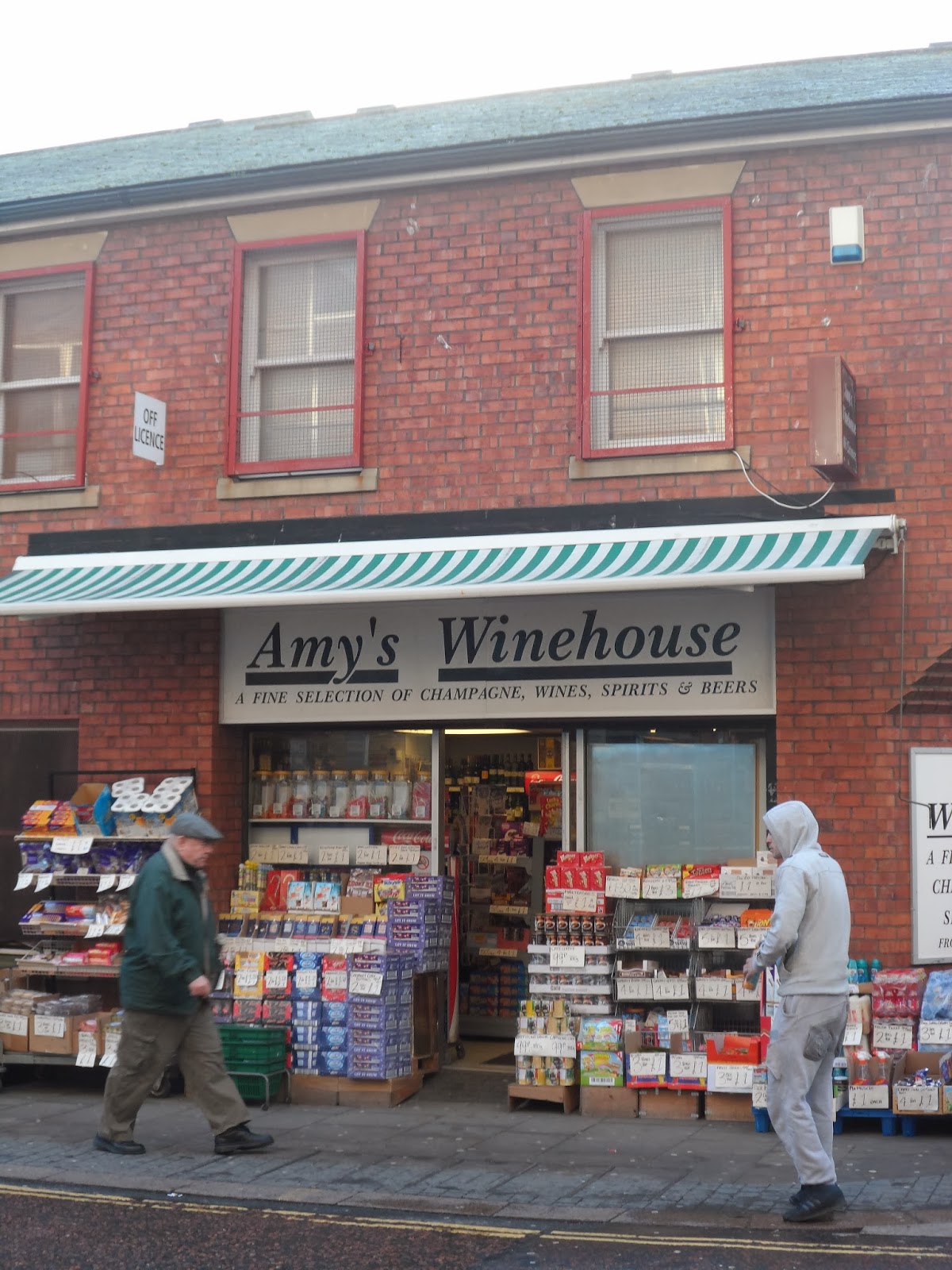 Come on: how could I not go to Amy's Winehouse?  It's so incredibly tasteless it should be a listed building.

After that, I went back to the station.  It's a squat building, chucked up in the 1960s by British Rail as a way of getting as much money out of the city centre spot as possible.  Because the tracks were below street level, there was plenty of potential for retail developments, and they built a perfunctory railway station and a larger shopping precinct. 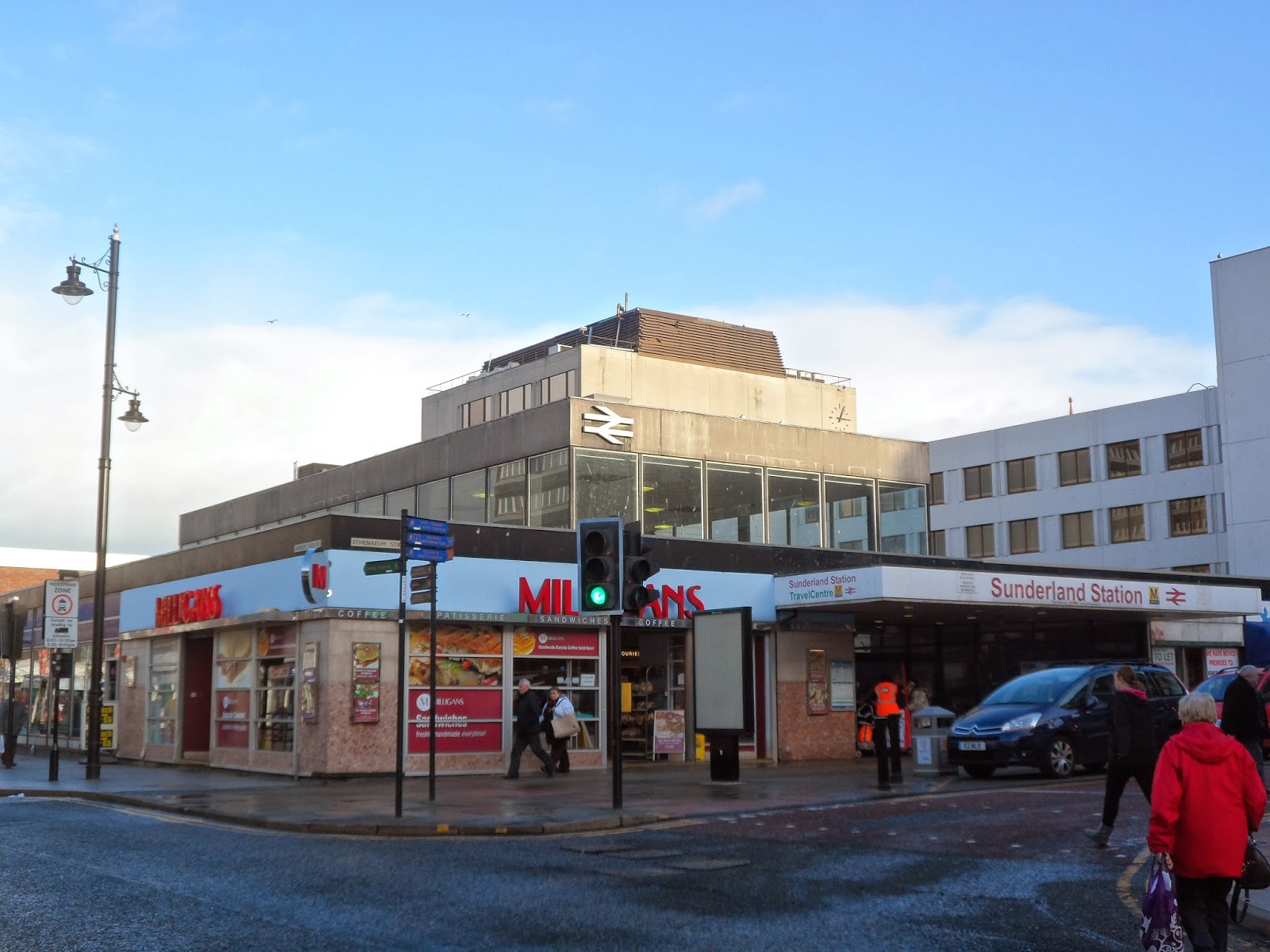 No-one will ever call that our nation's finest architectural hour.  Worse, the shops have mostly been colonised by greasy fast food restaurants and cheap cafes, driving the place even further downmarket.  Inside, the ticket hall got a bit of a revamp for the arrival of the Metro, but it's still not exactly St Pancras International. 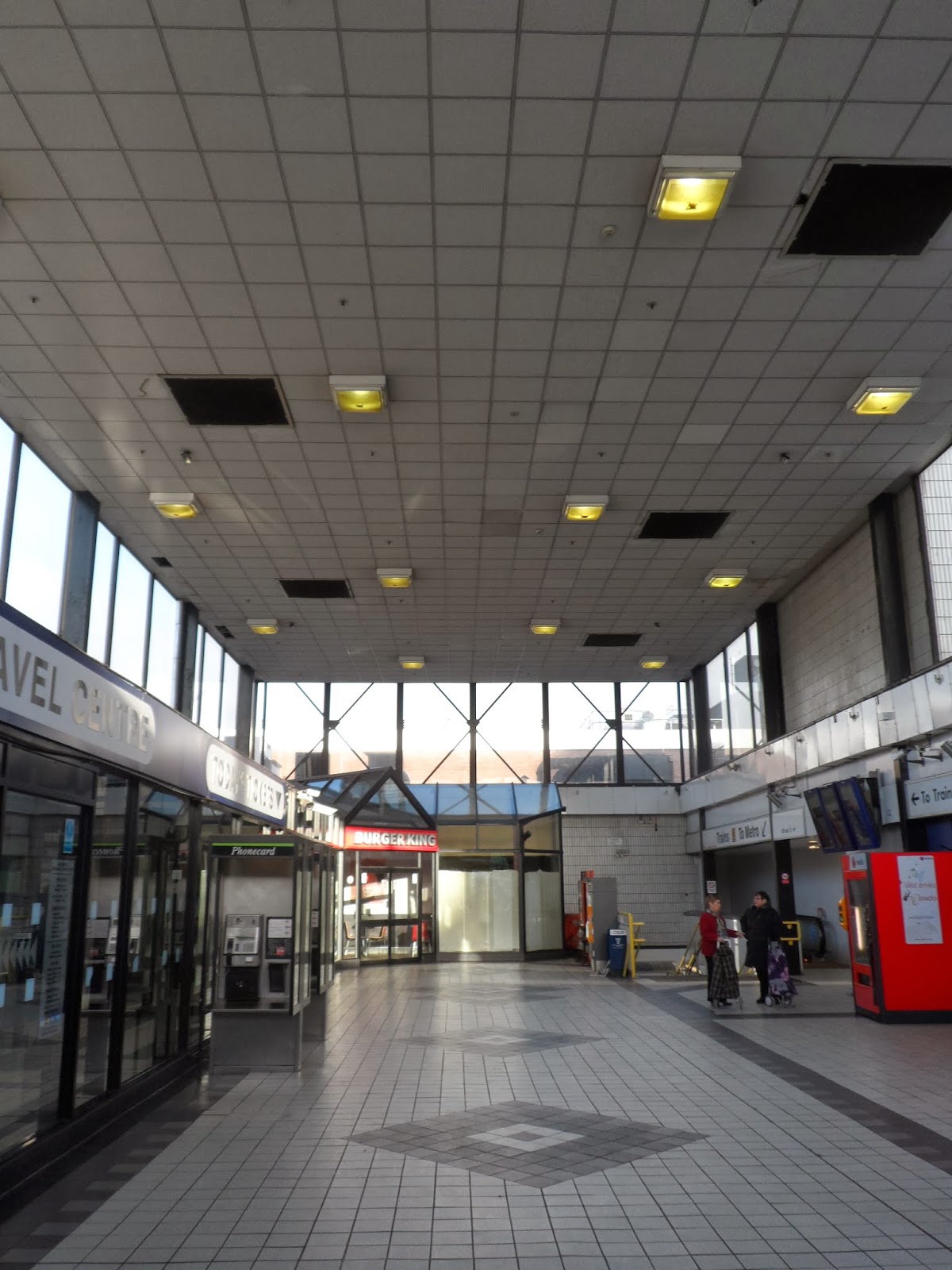 Not until you get downstairs, anyway.  Uniquely, Sunderland station has both Metro and heavy rail trains using the same platforms; it's a single wide island with southbound trains on one side and northbound on the other.  To distract you from the sparse rock walls, Nexus commissioned artists to fill the space.  On the southbound platform Julian Germain's Found depicts real items lost on the Metro, but the northbound platform has the real treat. 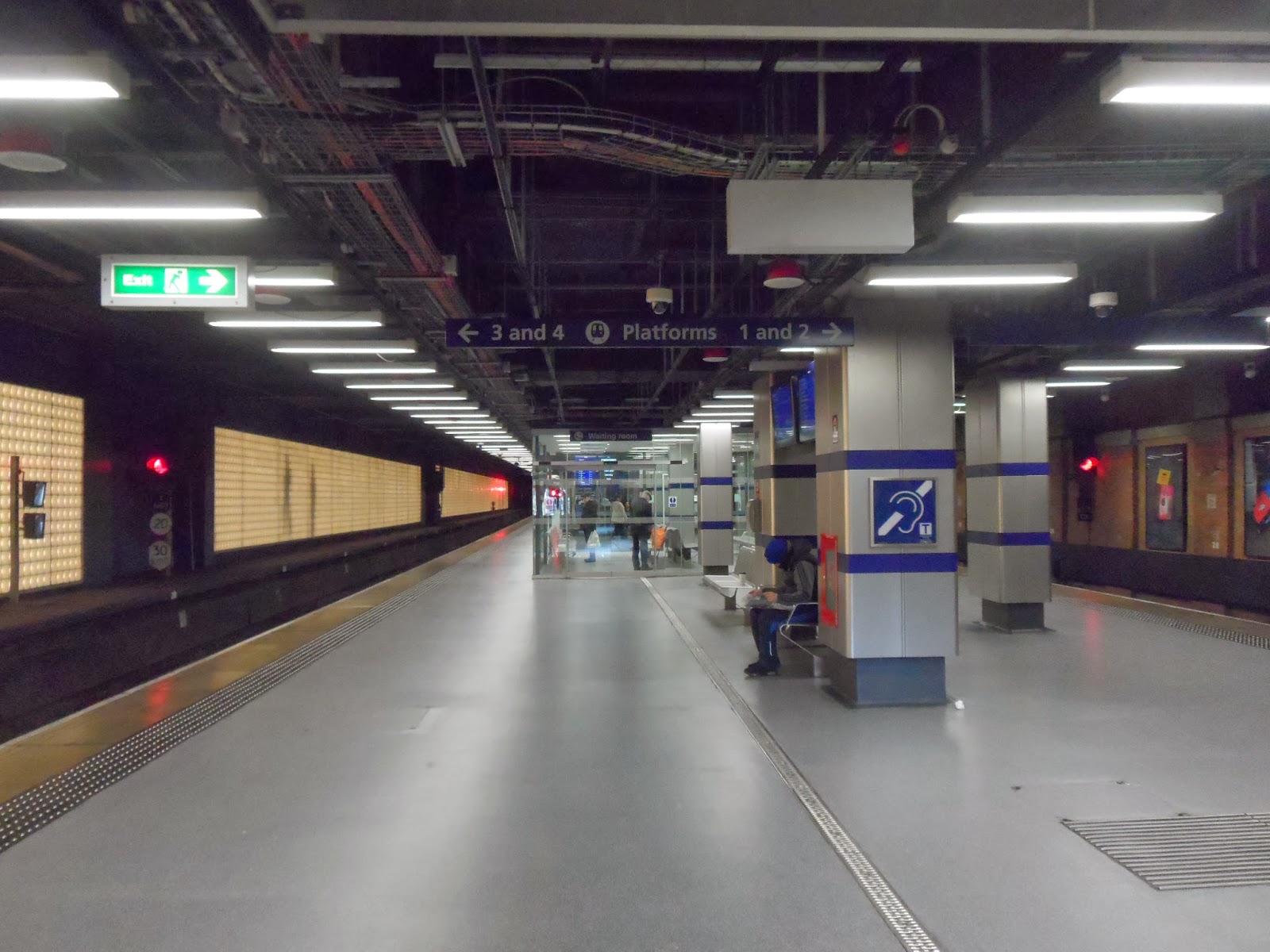 What looks like a wall of glass blocks is actually a series of LED lights which are home to ghostly figures, wandering back and forth, a secret world of passengers.  Called Platform 5, and the work of Jason Bruges Studios, it's the kind of random, captivating piece of art that can completely change your perception of a place.  Without it, Sunderland station would be a bit of a mess.  With it, there's magic.


After a few minutes of watching the ghosts walk back and forth I found a seat to wait for my Northern Rail Pacer.  Another Metro train passed through first, and I had to resist every urge in my body to jump aboard it and scoot around the network. 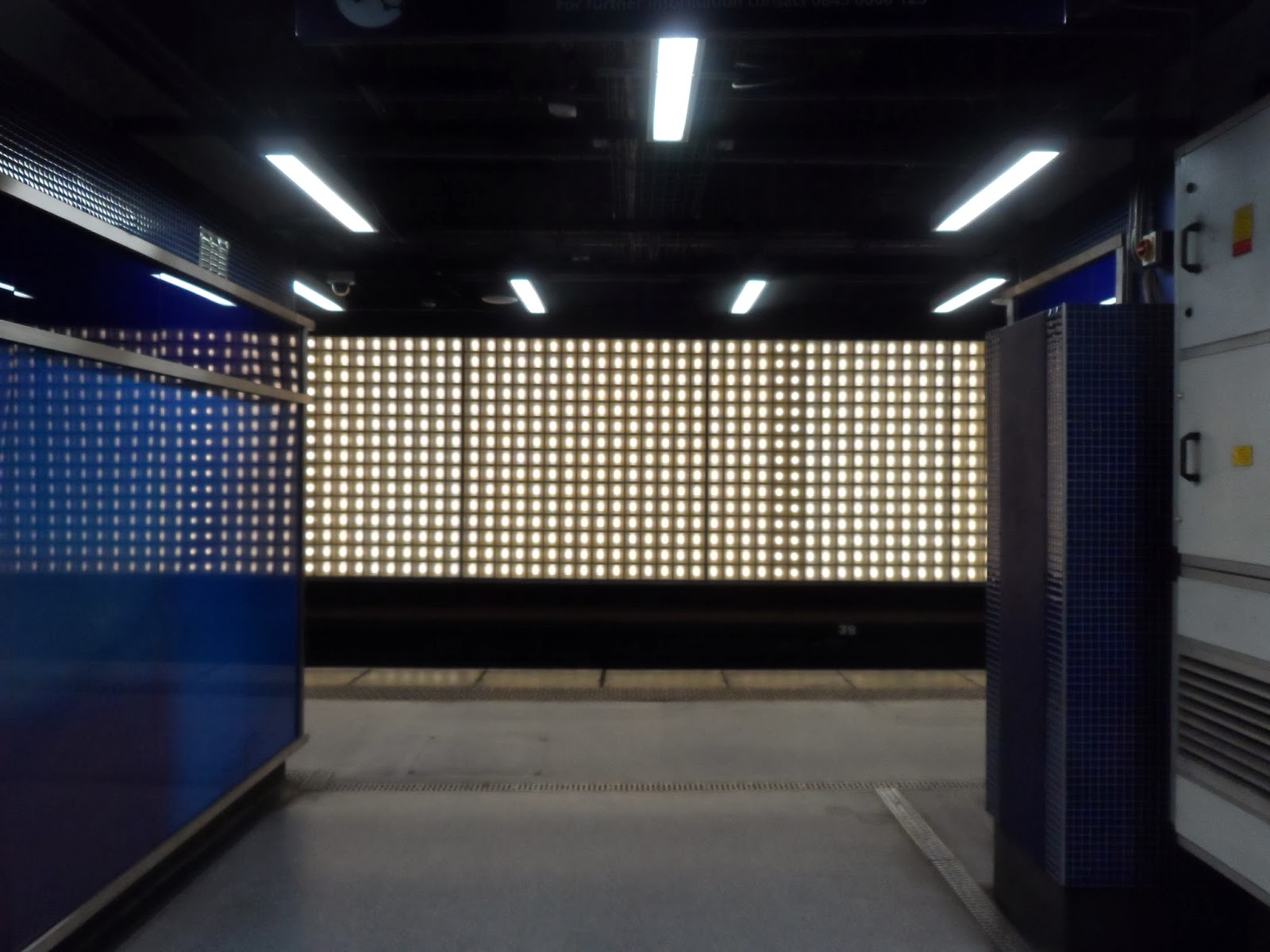 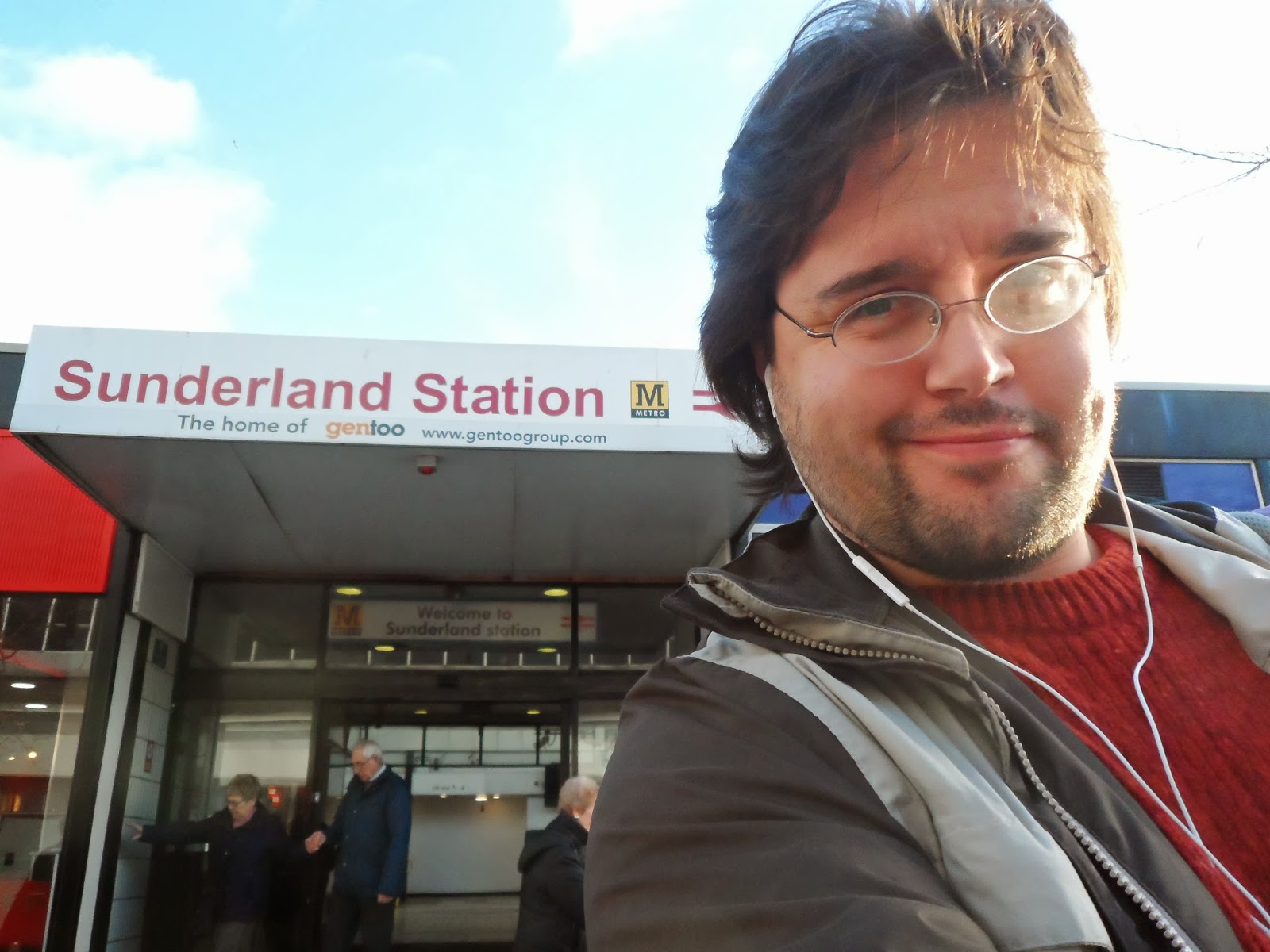 I've read a quarter of the way down and I have to stop to ask - where were your metro stops in Luton?

Fantastic! But you must come back and when you do, you have to go inside Monkwearmouth Station Museum - it's a museum now, and a hidden gem and a half.

There were definitely at least three lines: the Luton-Dunstable railway (now a SODDING BUSWAY) was one. There was one from Sundon Park (where I lived, ahem) that went via Marsh Farm and Biscot into town and onto the airport. And there was one that went from Stopsley to Farley Hill through town. And then I think I went mad and had a huge circle line or something.

It might still be in my mum's attic somewhere. I should have a root around next time I'm down.