While Liverpool Central's undergoing a transformation, a smaller, but no less welcome improvement is taking place at Lime Street mainline. 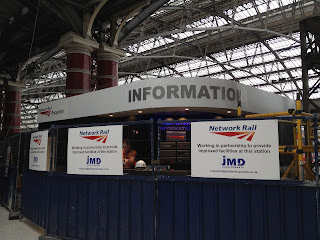 An information kiosk is being constructed on the concourse, where the cash machines were before they were exiled to the depths of the station.  It's about time, to be honest.  There's nowhere else on the station where you can, say, ask where the next Manchester train goes from.  You could try the Virgin Trains reception, but (a) they're probably restricted in what they know about other operators and (b) I should imagine the staff there no longer give a shit since they lost the franchise.

It's no great beauty, but it's a desk with a couple of computers on it: what more do you need?  I just hope it will be regularly staffed.  An unmanned information desk is one of the most frustrating sights in the world.  I'd like a big neon "i" on the top, perhaps one that rotates, but I'd like a big neon rotating sign on most things. 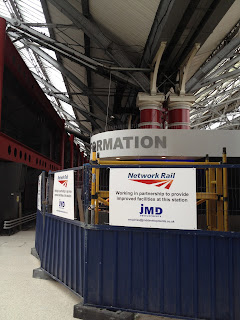 A side benefit is that the kiosk will form the new station reception.  The current one is, bizarrely, sited behind the gateline on Platform One, meaning you'd have to argue with the fierce inspectors to let you through.

It's a tiny progression, but very pleasing.
Posted by Scott Willison at 21:32