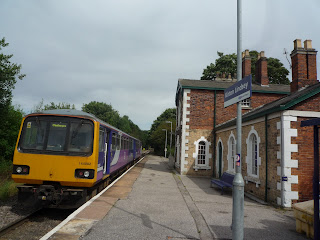 Kirton Lindsey railway station serves the village of Kirton-in-Lindsey.  I'm not sure why they don't bother with the "in".  Perhaps someone at Rail House has a hyphen phobia.

Two of us got off the train, raising the question: are there only three trains on a Saturday because no-one uses the service, or does no-one use the service because there are only three trains on a Saturday?  You could end up falling into a spiral of an argument with that one.  The only way to test it would be to increase the service and see what happens, but why would Northern Rail bother with that when there are only two people using the station?

The station once had two tracks, a footbridge, and a fine station house; now only the house remains, converted to a private residence.  It's been well preserved though, with a nicely planted garden. 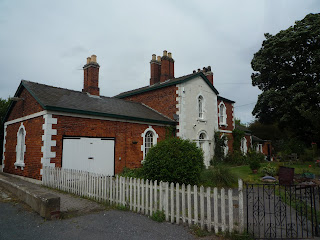 The boy who got off the train with me was already barking into his mobile phone as we trekked down towards the road.  I let him get a bit ahead of me so I could take the station sign pic.  Five years later, and I'm still a bit embarrassed larking around with a camera in front of a BR sign.  You'd have thought I'd be used to it by now. 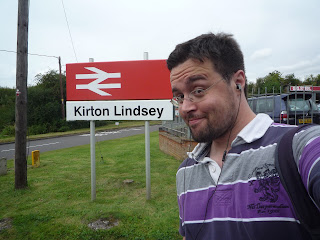 I needed to catch a bus from the village and, as usual, it had been incredibly difficult to plan it back home in Birkenhead.  It's 2012, people.  I should be able to sit at my computer and be able to plan a simple bus journey with little hassle.  As it was, I scurried along the footpath, knowing that there was a bus stop somewhere around here, and hoping I'd get there with time to spare.

Train boy was still yelling into his phone, but he was walking far too slowly, so I overtook him somewhere outside an industrial estate.  Kirton-in-Lindsay, from what I saw of it, won't win any prizes for Britian's Most Charming Village.  I think the state of the bus shelter pretty much sums it up. 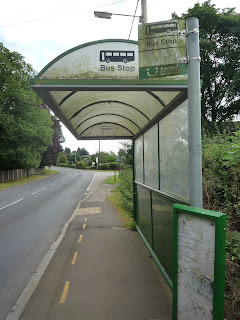 Now I'm a fan of gratuitous male nudity, as I'm sure you're aware.  If you feel like removing your shirt (or more) - go for it.  I have no objection, and I will happily watch out of the corner of my eye.  That's the kind of pervert I am.

I normally like a bit of warning though.  I was waiting at the bus stop, minding my own business, when I noticed that train lad had taken his shirt off and was changing.  I didn't know where to look.  Well, alright, I did know where to look; I just had to try and do it subtly.  I thought I'd managed to get away with it until I got home and found a photo of him staring straight into the camera.  Ahem. 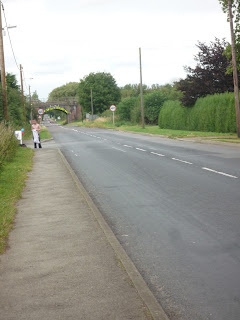 I could have walked from Kirton-in-Lindsay to Brigg, the next station.  There's actually a footpath that connects the two villages.  I'd have preferred it, to be honest; it's more in keeping with the spirit of the blog.

Problem is, Lincolnshire's not the most scenic of counties.  It's incredibly flat and open.  There aren't many hills or forests to surprise you.  So I'd have been trudging across field after field.  And worse, the path was a completely straight, uninterrupted diagonal.  You can see the faint trace of it on the satellite map below - just a single line cutting through crop after crop, just above the farmhouse.

It looked, let's be honest, boring as hell.  And it was an eight mile trek.  Eight miles without interruptions, turns, or hills.

Stuff that, I thought.

The 103 took me to Scunthorpe and, by the time we reached the town's bus station, I was the only passenger.  I was trying not to feel paranoid about the way public transportation seemed to empty when I got on board. 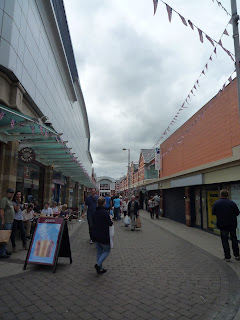 This is going to sound odd, but I didn't want to explore Scunthorpe.  Its station is on my to-do list, and so I wanted to save the town for when I collected it.  Using up all its delights on a bus journey just seemed wrong.  I wanted to keep it for when I arrived by rail.

Instead of wandering around for a while, I headed for the department store - which was another Co-op.  Again, I was reminded that this is the county the twenty-first century forgot.  On my way in I'd been surprised by how many independent petrol stations there were - no Shells or BPs, just "Riz" and "Applegreen".  The cafes in the town centre seemed to regard modern coffees - lattes and cappuccinos - as some kind of aberration.  It was all a bit bizarre. 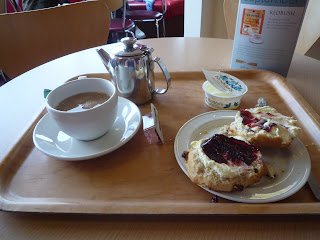 Nice scones though - and yes, I put the jam on top of the clotted cream, WHAT OF IT?

After that, all I had to do was return to the exchange for my next bus, out to Brigg.  This one was a lot busier, alleviating my fears that I was some kind of public transport curse.  We headed out of town on utterly straight, utterly tedious dual carriageways.  The land here is so cheap and easy to build on that they indulge themselves with the transport network - long, clear, over-engineered roads that other parts of the country can only look at enviously.

We passed signs for the Humber Bridge, and I craned my neck in the hope of catching a glimpse of its famously tall towers.  I thought I saw them at one point, but they turned out to be some chimneys for an ugly factory; I think the bridge will have to wait for when I collect Hull station.

The bus terminated in a lay by behind the shops in Brigg, where a couple of teenagers were celebrating Saturday night with a bottle of Strongbow in the shelter.  I followed my fellow passengers into the town centre. 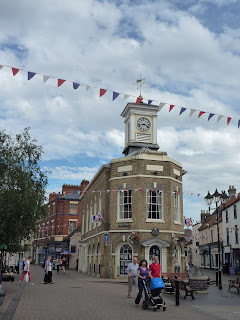 Gainsborough had felt like it wanted to be as up to date and exciting as the rest of Britain, but it somehow never managed it.  Like no-one invited it to the party.  Brigg, on the other hand, had abstained from the modern world, and it felt all the better for it.  It had decided that it was quite happy with living in the past, thank you very much.

The market was just packing up as I stalked the cobbled streets.  I stood on the bridge over the river and watched ducks peck at underwater food; I passed families sucking 99s after a day's shopping.  Presumably the bunting was a hangover from the Jubilee and the Olympics, but equally, I could believe it was always there, hanging across the high street, a tribute to Her Majesty (gawd bless you ma'am!). 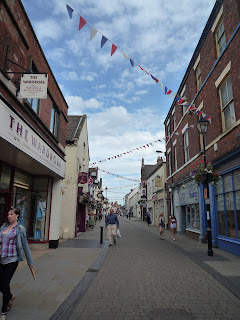 Behind the main street were elegant Georgian townhouses and tiny courts lined with flowers.  I was charmed,  in spite of myself.  Brigg was where the folk song Horkstow Grange was first recorded by the academic Percy Grainger.  If you've never heard of this song, lucky you.  It's perhaps best known for its main character, who gave his name to 1970s folk rock band, Steeleye Span - who, as I've complained on previous occasions, are The BF's favourite band.  Basically, if Brigg had burned to the ground in the middle of the seventeenth century, then Steeleye Span might never have happened.  That I overcame this massive prejudice against the village tells you how nice it was. 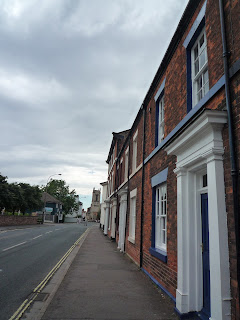 It began to spit with rain, so I took shelter in the only logical place: a pub.  I picked the Woolpack, and immediately regretted it.  It was a local's pub, full of bruisers watching the football scores come in.  I hid in the corner with my pint of bitter, trying not to look out of place, trying not to attract more quizzical expressions than I had to.  So much, I reflected wryly, for choosing a pub because the name amused me.

I had another one in the Black Bull, which was a bit better, but still smelt of wet dog (though that might have been the two husky gentlemen at the table across from me).  At least its patrons didn't look like they were on the edge of smashing a chair over one another's head for fun.  Then I headed out to the train station. 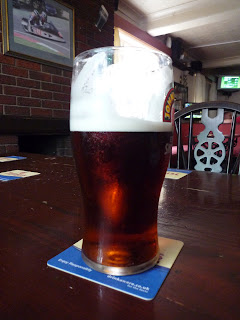 It was, at least, sign posted this time.  A wide expanse of rough tarmac would probably have served as a great car park for commuters, if there were any commuters who worked for only three hours every Saturday.  A footbridge rusted quietly.  In the distance, I could see the gates of a level crossing a couple of streets away. 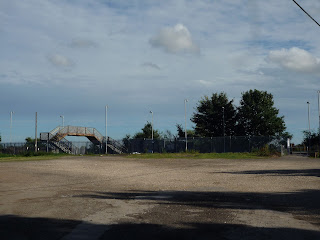 As with Gainsborough earlier in the day, I wasn't alone at Brigg.  They weren't trainspotters this time, but a couple of bored teenagers, who had annexed the station as "somewhere to go".  They looked at me with undisguised annoyance then, realising I wasn't going anywhere, they got up and walked away.  Damn these passengers, coming along and ruining their peace. 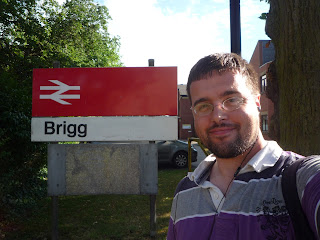 The train was late.  I don't like late trains at the best of times, but I had a tight connection at the next station.  I'd counted on there being ten minutes between the train arriving at Barnetby and my train home to Liverpool departing.  With each moment of lateness, my tension ratcheted up, my mouth got drier, and my heart stopped.

It wasn't just about getting the train home, after all.  I had to collect the station.  There was no point in coming all the way across the country and doing almost all the stations on the line.

The train arrived, eight minutes late, and I found a seat near the exit.  I was going to have to be quick. 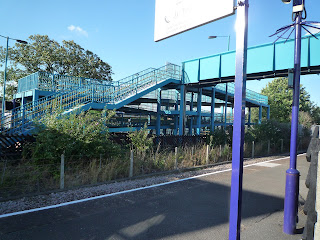 I flung myself off the train and ran up the steps, up and over the bridge, and back down again.  Back when I started this whole project, I said that a station only counted as "collected" if I passed through the ticket barrier - or whatever the unstaffed version of that is.  A platform sign just won't do.  It's a rule that I've stuck to throughout, and one that some people should probably take on board.

I ran past the bemused locals in the pub garden opposite, found the sign at the bottom of the road, and took my photo. 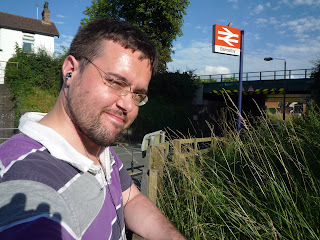 That gave me a bit of breathing room.  I was able to walk back up the hill - past those now even more bemused locals again - to have a look at the station building.  Though it's in the middle of nowhere, it's an important junction, and gets a lot of freight traffic passing through on its way to the ports on the east coast.  The old station's now being used by Network Rail; it might not be quite the same as a nice waiting room and a friendly stationmaster, but at least it's getting some use for railway business. 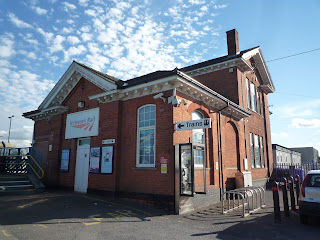 It was strange thinking that I'd spent an entire day in Lincolnshire, but I'd only made two short train trips within the county; most of my time and effort had been taken up with just getting here.  And now I had to do it all over again to get home... 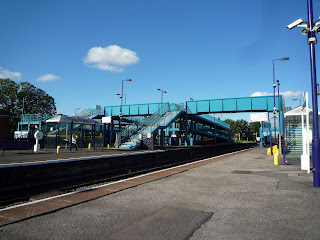 Sorry this is very much a delayed response, but I've just read this piece. The independent petrol station you mentioned is Rix not Riz...they are based in Hull. It's the same family as Brian Rix the actor. A useless bit of information, but I thought you'd like to know!