It was the end of my Christmas visit home.  Presents packed, stomach stuffed, and I was heading for the station.  Instead of turning south, for the train to London, I went to the northbound platform at Leagrave station.  I was heading into Bedfordshire.

Bedfordshire's sort of a pointless county, really.  It's my home so I'm allowed to say this.  It's tiny.  It's geographically anonymous.  It's not East Anglia, but it's not the Home Counties, but it's not the Midlands.  It's a mix of villages and towns with none of them being especially notable.  And its most famous son is John Bunyan, a man famous for writing a book that people may have heard of but probably haven't read.

It's also deeply divided internally.  Luton occupies the bottom right corner of the county, thrusting at its borders and forever threatening to burst free and swallow more of the land around it.  It's Luton vs Bedfordshire; town vs country, industry vs agriculture, working vs middle class.  Luton sneers at the Bedfordshire countryside for its parochialism and its backwardness, while Bedfordshire patronises Luton for its ugliness and its poverty.

Luton also looks south for its destiny.  Its eyes are very definitely trained on the capital, half an hour away, while Bedfordshire looks around it for solace.  Dunstable would rather work with the tiny country towns of Ampthill and Leighton Buzzard than the grimy industrial Luton, even though the dividing line between the two is blurred beyond all recognition.

This preamble is to explain how this was the first time, ever, I'd stood on that northbound platform, even though I'd lived there for eighteen years.  I'd never been north of Luton, not to visit; I'd always just passed through on a train or a motorway.  This was going to be my first trip into the county of my birth. 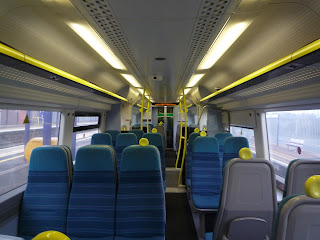 The train was one of the new ones. all air conditioning and automated voices.  I was surprised to find that the woman doing the Thameslink voices was the same one who does Merseyrail.  I felt strangely betrayed, like I'd caught her cheating behind my back. 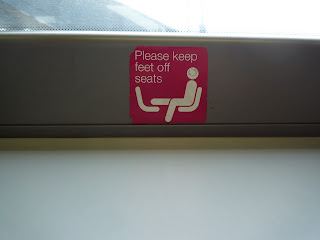 - or as it's also known, "Please keep feet off the seats - but feel free to rest your enormous penis on them."

My first stop was Harlington, a small commuter village.  The station building was an exact replica of the one at Leagrave - it was as though the Victorians got them all out of a kit, like those McDonalds Drive-ins that come on the back of a lorry. 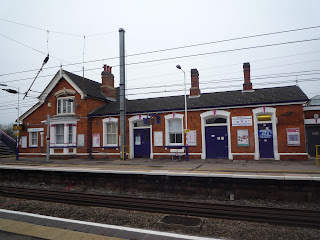 It still felt appreciably countrysidey, though.  The direct trains to London make this a popular place for City workers but the air smelt of hearthsides and there were fields immediately in view. 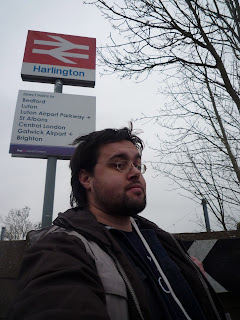 Yes, my hair is a disaster.

The village proper was lovely too.  Tiny cottages hunched against the roadside, lovingly restored and whitewashed.  The day was dark and miserable - stuck in that void between Christmas and New Year and sulking - but the twist of a road to show a country church gave me a tiny lift.  The war memorial still had its poppy wreaths, and an old lady carried a single bag of shopping from the village store.  It was homely and pleasant. 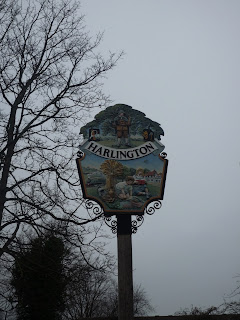 A duck down a back alley took me to the newer part of the village, a post-war council estate.  In Luton, the design of cul-de-sacs and tiny alleyways lead to what my mum always called "mugger's paradise".  Here in pastoral Bedfordshire, it just felt homely and sweet.  The houses were accompanied by generous greens and no-one had paved over their lawns for driveways. 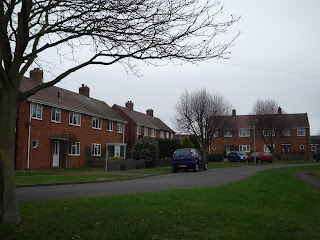 I wonder how many of those are still council houses though, and how many are now private homes, owned by commuters.  Good social housing that's now a bolthole for weekends away from the office.

By the surprisingly enormous Harlington Upper School I took a left turn, onto a pathway that ran alongside the sports pitches.  From here on I was heading across country towards Flitwick, the next station on the Thameslink line.  I could hear the Midland Main Line trains whizzing through on their way to Leeds or Sheffield every few minutes as I climbed the hill, but that was the only sound: most people were sensibly inside watching the telly and scoffing Quality Street. 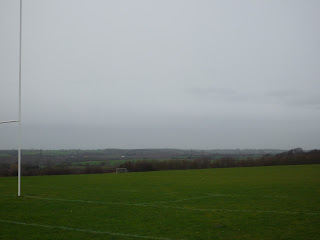 I was following the John Bunyan Trail, a tribute to the County's most famous son and tracking places associated with him or The Pilgrim's Progress.  The geography in the novel is roughly allied to the geography of Bedfordshire, so it's possible to follow the journey - if you want to.  I have to be honest, I've never read it, and given that it sounds like the most obvious religious allegory ever written (the main character is called Christian, for goodness' sake) I doubt I ever will.  (I have read The Land of Far-Beyond, Enid Blyton's version of the story though).  Until they instigate the David Arnold Trail, it'll have to do. 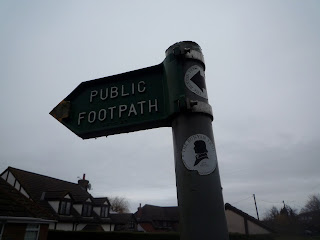 The second warmest year on record meant the fields weren't too bad, but I was still getting mud splattered up against my jeans as I walked.  In most places it was just a little squidgy, but now and then it turned into thick grey clay that sucked at my boots and made my footsteps into tiny pools.  I staggered on through empty fallow countryside, or fields with green tops showing, before I came across a real surprise: straw. 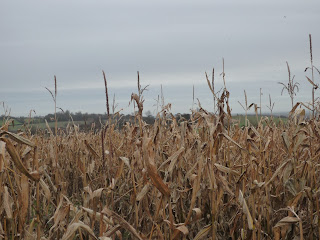 A sudden golden horizon in a sepia day.  Straw-plaiting has a long history in the county (note the bushel of straw on the Harlington sign above), particularly in Luton, where straw hats were a massive industry.  Obviously, fashions changed, and now the only Hatters you find in the town are the football club.  I was surprised to see that there was still straw being grown, but tiny signs round the edge of the field said this was for an agricultural feed company.  I was pleased there was still a bit of farming tradition still ongoing.

I hadn't realised it but I'd wandered off the Bunyan Trail.  I was using an OS map (the BF bought me a subscription to their Get-a-Map service for Christmas) but I couldn't quite get my bearings - there seemed to be too many copses in reality, like someone had snuck in and planted more trees while the Ordnance Survey weren't looking.

It only became clear that I'd taken a wrong turn when I found myself in front of an old empty barn. 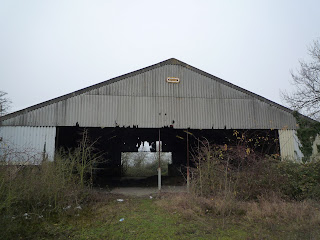 The barn was clearly used as a "base" by some local kids, but it had a maudlin, abandoned air to it; there weren't the expected empty cans of cheap beer and cider.  The walls were covered with graffiti but it wasn't the usual massive genitals and obscenities.  Instead there were tributes to someone called SUV, who had died.  I don't know who he was, or how he died, but it was clear from the walls that he was loved. 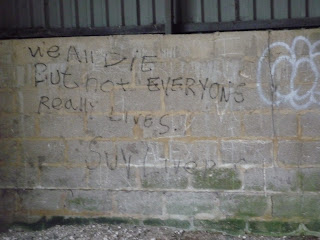 A scramble through a hedge, a death-defying leap over a ditch, and I was back on track (hoho) and following the railway line towards Westoning. 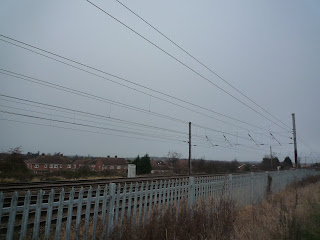 Westoning's about as ordinary a village as you can possibly get: its only features of interest were a road called The Pyghite (where did that come from?) and a clock tower built for Queen Victoria's Jubilee.  The tower had become a one-stop shop for all the village's notices, with signs about Bedfordshire in Bloom, the restorers, the history of the village and a Christmas decoration all slapped on the side.  It made it look a bit messy. 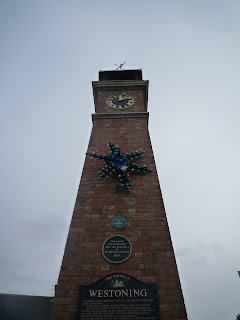 From Westoning I headed to Flitwick (pronounced Flit-ick, proving that Scousers don't have a monopoly on confusing place names).  It has always been paired with Ampthill, its near neighbour; while Ampthill is larger and more important, Flitwick got the railway station, which I'm sure always annoys them.  Similarly, only a last minute decision sent the main line from St Pancras through Luton, instead of its more historic neighbour Dunstable; now they're dwarfed by their neighbour and one of the largest towns in Britain without its own station. 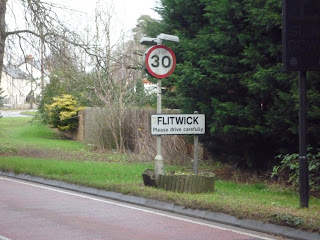 Flitwick's lost what charm it had, buried under three-bedroom Tudorbethan semis and road improvements.  The station's in the centre of town but what really draws your attention are the car parks and the Tesco superstore.  There's no simple country life here. 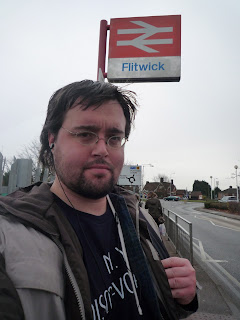 I was lucky - there was a train to Bedford due in only a couple of minutes.  The station's got four platforms, and another Victorian building from exactly the same multipack as Leagrave and Harlington.  Everything's in purple and pink, which is all very "hey, we're modern!" but not exactly pleasing on the eye. 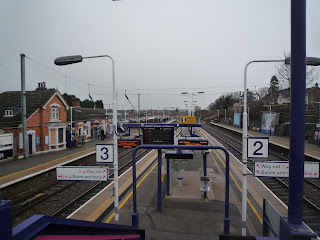 Bedford - the end of the Thameslink line, the County town (when there was a county council), and another town I'd never been to.  The us vs them between Luton and Bedford was perhaps the most violent, Bedford sniffy of this upstart town that had claimed all the jobs and people, Luton resentful of the smaller town having such sway over its life (Luton only recently gained administrative independence from the rest of the county; before that there was a period of just nine years where it was responsible for its own services).  I grew up thinking of the town as a sort of Cambridge on the Ouse, a historic town with ancient buildings, a perception coloured by visits to my mum's home town of Hertford.  That was another county town which was overshadowed by its larger, more famous neighbours.

But you know what?  Bedford's awful.  I had a little wander round, and it was an uninspired, colourless town - it was so generic it was embarrassing.  I could have been anywhere in the country.

And the railway station is horrible.  Just plain horrible. 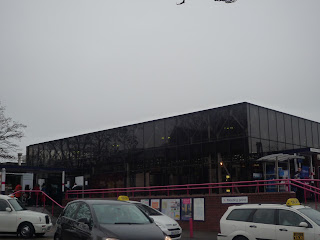 I'd expected a Victorian terminus, but what I got instead was a brown glass box with a car park in front.  It dates from the 1970s and, oh boy, does it look it.  I'd always had a chip on my shoulder about Luton station's awfulness, thinking Bedford must beat it into a cocked hat, but no: this was equally awful, just in a different way. 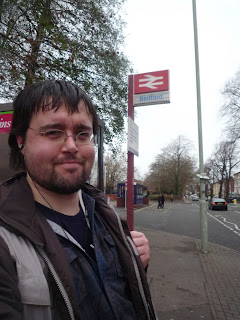 Inside it was like being in a beer bottle.  The low roof was dark and uninviting, the steelwork made it feel unfinished, and the Pumpkin cafe and ticket barriers had been inserted inelegantly.  It was just a horrible mess of a station. 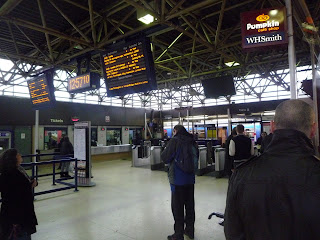 I didn't stay long; I had to get home (properly home, to Merseyside).  I have to admit that I felt a bit better about Bedfordshire now.  Not that it had impressed me, or seduced me, or made me think it was a wonderful place.  I felt better because now I knew it was just as rubbish as I thought it was.  All those years of never venturing north and imagining a House Beautiful beyond Luton's boundaries - nonsense.  The rest of the County was just as boring and drab as the my home town.

No wonder I left.
Posted by Scott Willison at 11:47

There are so many footpaths named after the great and good these days. How about a Russell Tovey Trail?

Stop following ducks in back alleys.

P.S. Have you been watching Portillo's great railway journeys lately?