It Doesn't Take A Genius 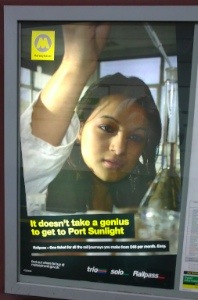 She's a scientist, see? She's got a conical flask there. You can't really see it, because it's on the extreme right of the picture and it's made of glass, but it's there. Plus she's using a pipette. Again you can't really see it, because it's transparent, and there's black behind it, and her hand is actually cropped off the top so you can't see her holding it, but it's there. Just squint a bit. I know your eye is naturally drawn to the pretty girl in the middle, but move beyond that.

And yes, she is a scientist, not a schoolgirl. I know the minute you see a young woman in a white shirt fiddling with scientific equipment you automatically assume she's a schoolgirl, because there are a lot more episodes of Waterloo Road and Grange Hill out there than Young Women Chemists, but that's your prejudice, and you should put it to one side. Also she looks very young. But no; she's a scientist, and so she is a genius.

Geniuses use public transport too. Richard Dawkins practically lives on the Tube. Tim Berners-Lee has an annual season ticket. Stephen Hawking would be all over the buses if he could get his wheelchair on board. So a genius needs to get to work, and there's sciency genius type work happening in Port Sunlight. Involving pipettes. You see Port Sunlight on a poster, and you think heritage, tea-rooms and charming little houses. Well there's more to it than that: there's a blooming great ugly chemical factory too.

So the premise is this: genius scientist girl has to get to work at Port Sunlight so she can fiddle with pipettes and stare intensely into the middle distance, no doubt calculating how to spend her Nobel Prize winnings. So she uses a Railpass, or a Trio, or a Solo season ticket to get there. Because she's clever, you see?

BUT!!! You - yes, even you - can use these marvellous forms of transport too. You, a mere plebian, who has no access to conical flasks, can wield a Railpass at your leisure. Run along to a travel centre and you too can be like genius scientist girl, though probably with tackier lipstick.

And that is the message you should be getting from this poster. Definitely not "this girl is unbelievably thick, but even she can work out where Port Sunlight is". Definitely not that.

It doesn't take a genius to design a decent website either but that doesn't stop Merseytravel's from looking like virtual vomit.

She can't be a scientist. Scientists are men.

Isn't it a reference to the big Unilever factory at Port Sunlight?

Aye it is indeed, though looks more like the labs at Liverpool Uni to me. R+D labs are generally alot newer :P