Since I started writing this blog I've had literally thousands of queries (none) asking me about the technology I use to capture the various shots of me arsing around in front of station signs. "Do you employ a specialist photographer," they ask, "or do you just break out an Olympus?"

Well, this may shock you, but David Bailey has never come anywhere near this site. Lord Lichfield won't return my calls, and as for Rankin - well, he says he's busy, but I know it's just an excuse. The result is that I end up having to take my own photos, and I generally use my camera phone to do so. At first, I'd considered taking out a proper camera, but I wasn't keen on the extra bulk, and besides which, I've always had pretty good camera phones.

The first phone I used was a Sony Ericsson K800i, one of those chunky "candy bar" phones which had a 3.2 megapixel camera on the back. Then, a couple of years ago, I moved onto the C902; about a week after I got it, it showed up in Quantum of Solace, and I had to spend the next three months telling everyone it was just a spooky coincidence. It WAS.

All was fine until last Christmas, when my trusty C902 started to fall apart. The keyboard began to peel away, revealing the workings underneath - I was constantly checking it hadn't fallen apart in my pocket. Problem was, my contract didn't expire until March, so I was stuck with it. Fortunately I don't often leave the house so it didn't get too much wear and tear.

Now I have a brand new phone and I am mucho excited. It's a Sony Ericsson Vivaz (which I admit, sounds like a Japanese-Swedish stripper), it arrived yesterday, and it's delightfully shiny and glam. Eight megapixels, Wi-Fi, Walkman, a touch screen: I feel like I've entered the 21st Century. It's also nicely shaped in my hand, which is very handy for when I want to pretend I'm Doctor Beverley Crusher using a tricorder. That happens. 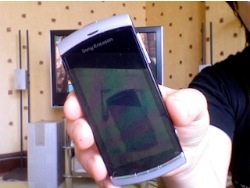 What's even more exciting is that it has the capability to film HD video. Yes, people, there may soon be moving pictures of each tart! Or more likely not, as if I talked on the videos you'd hear my weedy little voice and no-one wants that. It's nice to have the option though.

So, expect the quality of the pics to zoom up from now on. Well, the megapixel quality anyway. My limited point and click photo skills will continue to be as bog-standard as ever. Some things never change.

I'm just catching up with blogs I missed while I was away... your comment about Beverly Crusher made me LOL. Just had to say that. :P