It's a bright Saturday in spring. The sun's shining, there's a fresh breeze, there's buds on the trees. Naturally this means that I am tucked up inside with the blinds drawn and a laptop. I don't do "outdoors" very well. There's no wi-fi, television, or access to cakes outside. Not without paying for it. Also, there are "other people" outside, and that's just uncalled for.

I've been using my time usefully to update the Merseytart Map. Merseyrail have finally put the full version of the map online, with the Mouldsworth line and the FUCKING SQUARE and everything, so I've been forced to wrestle with Preview to get a decent state of play map. And here it is. 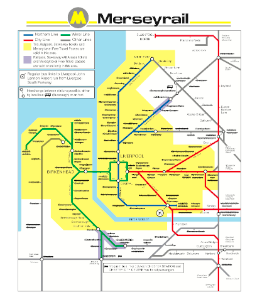 As you can see, it doesn't look like there's much to do. The remaining stations are very much peripheral. Half a dozen on the West Coast Main Line, the length of the Delamere branch, and a fair few on the Southport-Wigan route. Plus - gulp - Blackpool, and all that entails. There's also, frustratingly, Bryn which has managed to be missed. Not forgetting those last few remaining blips on Merseyrail itself - Birkdale & Southport on the Northern Line, and Bromborough Rake, Bromborough and Eastham to close off the Wirral Line.

Then it's just the final sweep of the Loop, so I can properly collect James Street, Moorfields, Lime Street and Central, and it's all done.