I've pretty much stayed away from eBay, for one very good reason: sometimes lust for an object drives me into a buying frenzy, I get a red mist, and then a month later I get a credit card bill that gives me night sweats. I'd bought one item, total, from there: a CD of Shirley Bassey Sings Bond, where The Bass has a crack at the Bond themes they didn't let her sing the first time round. If I tell you that it features a reggae version of We Have All The Time In The World, with Dame Shirley belting out the lyrics over a Bontempi organ backing track, you may understand why it took me five years before I went back into that dark world of online auctions. 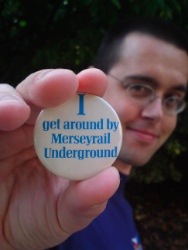 An idle afternoon at home though saw me tapping "Merseyrail" into the search box. Most of the results were either photos of various stations, or tickets for different destinations. None of these ticked my personal box. Two things did though - which is why I am now the proud owner of a badge saying "I get around by Merseyrail Underground". Yes, a badge: it's 1982 where I am. I don't know what I'm going to do with it. Perhaps I could wear it out on my next tarting trip? After all, I've never been to casualty with a broken nose.

What's worse is I paid nearly four quid for it - about five minutes from the end some twat turned up and bumped the bid up. I ended up dripping with sweat, pumping away at the refresh button like a loon and almost hyperventilating. Again: I don't eBay very often. 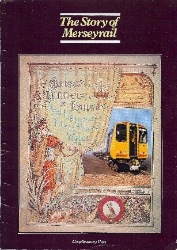 The second item is rather more interesting (and actually ended up being cheaper than the bloody badge). The Story of Merseyrail, a booklet printed to promote the opening of the Loop and Link in 1978. The booklet covers the history of the railways on Merseyside, from the original Liverpool and Manchester Railway back in 1830 up until nationalisation and then, in the sixties, the plan hatched between British Railways and the Liverpool Corporation to create the system we know and love today. 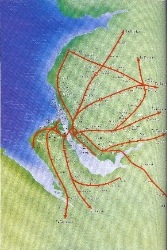 It's a great little booklet, with some fascinating photos of the tunneling works in progress, and some curious little anachronisms. The map on the inside cover, for example, showing the various different lines, with the Northern Line ending at Garston and the Wirral Line ending at Rock Ferry. It was another fifteen years before the system reached its present size. It trumpets the reconstruction of Sandhills, just as another reconstruction of Sandhills is coming to an end thirty years later. 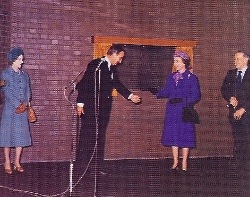 Here's a picture of Her Maj unveiling the plaque at Moorfields before being presented "with a commemorative ticket to Kirkby". Body language experts will be able to tell that she's thinking, "Oh, gee. Thanks."

It's also a little bit depressing, if I'm honest. The last couple of pages are entitled "Services", and this is where the PR comes in, telling you, the reader and future passenger, just what a difference the new Merseyrail is going to make to your life.

The essential advantage of a railway system for short-distance urban journeys is that it is not affected by the congestion to which road transport is liable, and it is for this reason that many major cities throughout the world have chosen railways as the answer to their transport problems...If the railway is underground the advantages are even more evident...they enjoy faster journey times, and their trains are less affected by bad weather conditions...

And then you get the really heartbreaking bit:

Present financial stringency has dictated a slowing down in the pace of development of local rail services but the changes that came to fruition in 1977 are intended as the basis for further enhancement of the system.

In the thirty years since this has been published, the pace of development hasn't so much slowed down as stopped. The whoops of joy that I and others I know let out when Lord Adonis announced that a piddly bit of the Liverpool-Manchester line would be electrified shows how low our expectations have fallen. Don't get me wrong, Lord Adonis has been deified in this house for his announcement, and he's welcome to come round for a cup of "thank you" tea any time. But back in the 70s, they were talking about electrifying the St Helens line and sending it underground, into the city, with new stations for the University and at Catherine Street. It was going to be a metro system, whizzing people into the powerful, rich city of Liverpool, because public transport was the future. At one point in the booklet, it talks of Moorfields, "which may well become the busiest passenger station in Great Britain outside London". In 2009, it's not even the busiest station in Liverpool.

That Bloody Woman became PM, and all of a sudden the wonderful, glowing Merseyrail system became an irritation, a place where the unemployed and the lower classes - and worse, Liverpudlians - congregated. Public transport was where you went if you were a failure, and Liverpool was the biggest "failure" of all.. Merseyrail became starved and was reduced to a husk.

It was a tribute to the planners back in the 60s that Merseyrail was conceived, it's a tribute to the workers in the 70s that it was built, and it continues to be a credit to the city in the 21st Century. The Story of Merseyrail is nice to have as a time capsule of optimism and hope. Plus, the back cover has the little swirly "cog" Merseyrail logo on it, and you can't help but love that.

Hello there - just to say that I discovered your blog last night and have been enjoying it immensely.

What a poignant book 'The Railways of Merseyside' has turned out to be.

Re: the badge. YOU WIN AT MERSEYRAIL

Best Merseyrail related item I ever saw on eBay was the headboard worn by the first class 507 train on its debut run in public service.

I didn't win it, but in hindsight that was probably a good thing as I got slightly carried away and ending up bidding an eyewateringly high amount for it. My PayPal account thanked me the next morning.

There has been a certain amount of expansion on Merseyrail, but nowhere near what was proposed by the 1973 Merseyside Metropolitan railway Act. High inflation and industrial unrest watered down most of the proposals.

The one that always got me was electricifaction as far as Kirkby only, where the Act gave powers for the electric line to run to Wigan, with a spur at Rainford to run through to Skem.

Just look at Kirkby station -the Liverpool side of the station is all corporate Merseyrail, clean and tidy, whereas the Northern Rail side is dark, dingy and ravaged with underinvestment. Shame.

Kirkby is indeed a depressing little station, for about half a dozen reasons. I'd love to know the logic that says a fast electrified route to a station on the edge of what is effectively a suburb of Liverpool is better than a fast electrified route to a major town like Wigan. Even going on to poor Rainford - within Merseyside and Merseytravel's remit, and yet left out on the fringe without a Sunday service - would have made a bit more sense.

The "we've got some leftover track so we may as well use it" proposal for a Park and Ride at Headbolt Lane isn't enough, and now they're suggesting sending the line on a brand new alignment up into Skem - but only on the Liverpool side, meaning there will be an even smaller spur from Wigan to Upholland. Electrifying through to Preston and Helsby would be nice too, but that's just me being greedy. I dunno, sometimes I wonder why they don't just put me in charge at Rail House.

You know, I've recently started using the only 'real' bit of the underground network to get to work and back (the loop) and my favourite subject/pet hate is how frustrating it is that the erm 'system' isn't expanded, even slightly to give us some sense of a metro system - and why aren't the lines rebranded!? Southport to Huntscross should really be the Central Line, and the Wirral Lines should be altered to avoid the present confusion on the network - I pity any poor visitors to theh city daring to use Merseyrail... asking how to get to Dan Dare or Bobby Grant Parkway...!?