Crikey blimey O'Reilly, it's been hot lately hasn't it? The constant humidity is causing me to sweat in a most ungentlemanly fashion; in fact, I've lately been taking to my bed to perspire, like a fading Southern belle in a Tennessee Williams play.

Life goes on however, and to stop me from turning into Blanche duBois, the Bf insisted we go over to Liverpool to hunt for garden furniture. We're in the middle of a landscaping project that would turn Charlie Dimmock white with fear, and so we'd like to get some decent chairs in the hope that at some point we'll be able to sit outside before the summer disappears.

While we were over there, I insisted we take a gander at the ongoing works at Liverpool Central. This was not a tart, as we had driven to the city and so I never actually used the station's facilities, but it did give me an idea of what's going on. 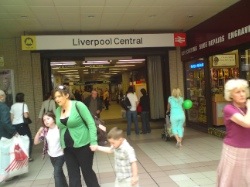 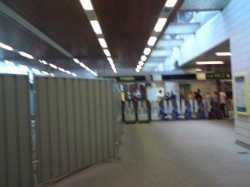 In the main, the ticket office has been torn out and there's a wall of metal sheeting taking up half of the booking hall. Behind this a new ticket office is taking shape. Tickets are now being sold within the mall itself, from the old Stationery Box, and as a matter of fact just that is an improvement on the old one. Bit of a shame for the poor old sod who used to flog papers and Mars bars from the kiosk, but it's all in the name of progress. 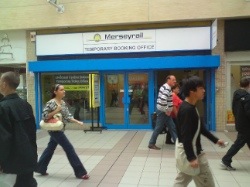 I've never been keen on Liverpool Central, always choosing Moorfields instead. Partly this is sentiment - in the days when I used to go out drinking of an evening, Moorfields was convenient for the bars of Cavern Walks. On top of that, Central is always, always too crowded (Merseyrail's busiest station, Central gets more passengers a year than even Lime Street). It's something that Network Rail has finally noticed, and in their Merseyside Route Utilisation Strategy, they've said that the situation can't continue as it is. The Northern Line pours all of its passengers onto a single island platform that was built in the 19th Century, and is becoming ludicrously - and dangerously - overcrowded. In the short term, they're going to be altering platform furniture and escalator access to try and improve the situation, but going forward they're going to need either a second platform (as at Moorfields) or even a brand new station, constructed beneath Church Street. The ticket hall refurbishment ties in with all this. One part that I'm aware of is that there'll be more ticket gates for a quicker throughput of passengers - hurray! The gates will also be capable of being fitted with Oyster card type readers for that magical, mythical day when Liverpool's commuters can chuck away their laminated Trio passes and enter the 21st Century. 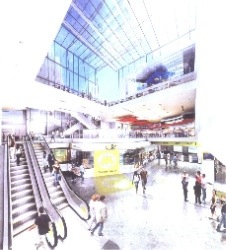 I've scoured the net for a bit more info, but sadly I can't find definite plans. What I have found is this render, taken from an architecture forum, which purportedly shows the future of the station. It's very much a long term proposal, as it also shows the links from the station to the new Central Village development on the former railway lands behind (which is why there are all those escalators). Cynical types will, however, also note that the render contains not only M-to-Go and Merseytravel branding, but also a sign for Four Land Ends - a station on the Tyne & Wear Metro. So the render's a bit of a hodge podge, in other words, and should probably be taken with a cellar of salt.

Looking on the bright side though, it's a bit marvelous, and I thoroughly approve. More news as and when it arrives.

And in a final, heart warming gesture, at the entrance to the station is a letter from my mate Bart Schmeink, apologising personally for the recent derailment and flooding which made the Northern Line into a bit of a nightmare. Bless his little Dutch cotton socks. 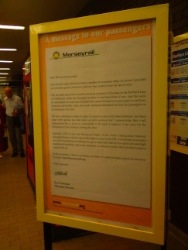 As a Merseyrail employee... this is awesome. Keep tarting.

Thanks very much! But you can't leave me in suspense like that... driver, ticket inspector, engineer? Bart the Grand High Poobah himself?