Plaque To The Future

Remember, back in October, I tried to visit Moorfields on the 30th anniversary of MerseyRail, but had my ambitions thwarted by a new toilet block? Well, Robert subsequently commented that the sign was back.

So a final Christmas shopping trip gave me the opportunity to have a shufti and see if I could find it. Since the cosmic significance of the 30th birthday trip was now lost, there wasn't much point, but it was nice to find it for completion's sake. If I can sound like an 80s American sitcom for a moment, I gained closure. 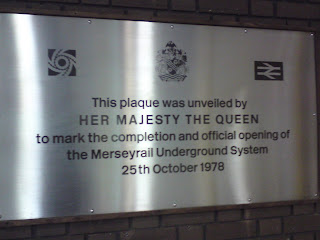 And there it is: Gawd bless you ma'am, and all that. Well done on your consumate unveiling skills.

Next to the plaque was a large copy of Centre of the Universe, Merseyrail's answer to The Great Bear (and which I still haven't got round to buying). It wittily associates notable Merseysiders with relevant stations, and my 007-head couldn't avoid pointing out that Chester's been appropriately renamed: 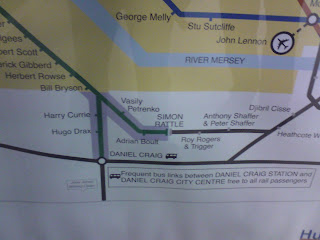 Please also note that Bache is replaced by Hugo Drax, which seems a bit odd at first, since Hugo Drax is in Moonraker and that was Roger Moore. However, it should be pointed out that in the novel, Sir Hugo Drax is originally from Liverpool, so this is a clever use of 007-Liverpool referencing (even if it's been placed in Cheshire). Strict Bond-geekery however makes me point out that Drax is in fact, not a Scouser at all, but is in fact the Graf Hugo von der Drache, a former Nazi hell bent on dropping a nuclear bomb on London. Even the most militant Liverpudlian hasn't advocated the atomic destruction of the Capital (well, maybe Derek Hatton).

From the station we plunged head first into the shopping carnival of Liverpool 1. I love shopping here now; it's amazing what a transformation it's made to the city, not just in terms of the range of shops, but also the shopping experience. There's something so pleasant about the whole city centre now, and the shops are well stocked and beautifully laid out. It certainly beats the hermetically sealed, faux-Classical hell of the Trafford Centre. 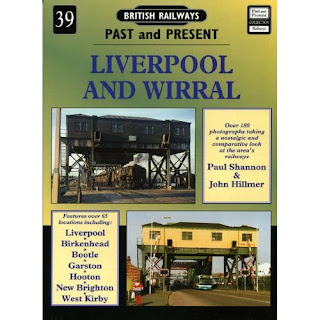 In the grand tradition of Christmas shopping, I bought a present for the person I care most about in the whole world i.e. me. Inside the wonderful new Waterstone's I found myself drawn towards this book, and I thought, what the heck. It's a great collection of before and after shots, showing historic Merseyside stations in the past, compared with today. It's highly recommended if you're like me and have any interest in the Liverpool and Wirral's railway stations. Some things have changed beyond recognition, some things aren't even there any more (Riverside station?) but a lot is pretty much unchanged: a positive comment on the health of the system, I feel...
Posted by Scott Willison at 18:42