It's That Man Again

Well, it's been a right old posting frenzy this month, hasn't it? I'll try to ignore the fact that for all my random wittering, there's not been too much actual Tarting - ostensibly the reason behind this blog. Somehow it's evolved into me just going on about train stations, and stuff I've seen around. I hope that regular readers will indulge me in this. As this project's moved on, I've just become more and more enmeshed in the Merseyworld, and I just get enthused and want to share it. If I didn't put it down here, I'd end up boring The Wife even more than I already do. Either that or my Facebook status updates would become ridiculously long.

Anyway, to the fulcrum of this post's gist: the continuing works at Lime Street. It's been progressing for a few months now, and I spoke about it back in September. The work area's been fenced off, but plastic windows here and there allow you to have a bit of a nose. I had a poke around before my train to work this morning, trying hard not to look like a super-terrorist. Unfortunately most of my pics didn't come out (I have a new cameraphone, the Sony Ericsson C902, and I'm still getting to grips with it) but a few of them show the extent of what's going on. The main view is pretty impressive. 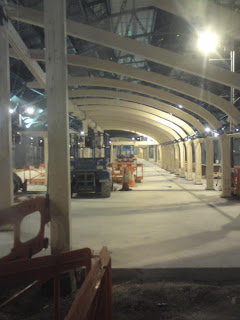 This shot reminds me of a cathedral somehow - I think it must be the combination of the wood and the arches, receding into the distance. These will form the lounges and shops that are being installed along the length of the platform, and they're impressing so far. It's an interesting change from the usual grey steel, or from the mirrored 80s buildings you find elsewhere in the station. 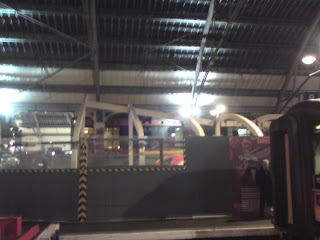 Further along the platform, and the ribs are rising above the fence, as though the La Machine spider is making a return appearance. From this angle they actually look malevolent, like legs rising up ready to pounce.
And finally, just to show the extent of the work, the rest of the space between platforms 7 and 8 has been turned into a holding area for the machinery and building materials and what look like enormous pieces of polystyrene. 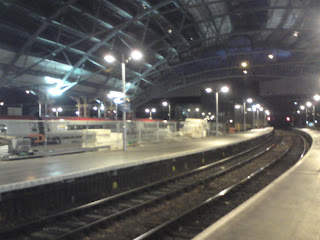 It's all due for completion sometime in the spring. Further updates, as and when I get round to it...
Posted by Scott Willison at 13:15

Hi Scott! Your blog is interesting and I work for the Echo, give me a bell on 07785521486 to discuss it. Are you nearly finished in your quest? You can mail me on kevin.core@liverpool.com
Cheers

Flippin 'eck! The Echo wanna put you in there pages... lucky you!

Anyway I can't wait to get home to see all the changes to Liverpool - I haven't even had a chance to visit Liverpool 1 yet and it looks like the much needed investment in Lime Street is starting to bear fruit. Shame we don't get the same amount of investment Picadilly got for the Commonwealth Games.

Liverpool One is AMAZING. Seriously. Though I'd rather be in the Seychelles, all things considered.

As for the Echo... Bizarrely, watch this space :)

Liverpool One is AMAZING..ly not aimed at me. Too many expensive cack shops, not enough shops that sell decent hard-wearing stuff.

And nowhere near enough DAMNED TREES. >:(

The lack of trees is because they had to leave room for the trams to run down Paradise Street. The lack of both trees and trams is doubly depressing.