Sometimes station collecting is a box-ticking exercise.  Get off the train, take the photo, job done.  And sometimes it's... magic. 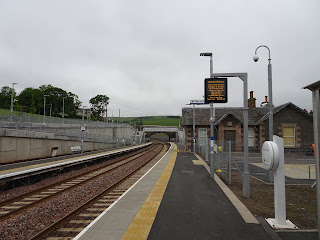 Stow station is, to use a technical term, miles from anywhere.  It's almost a twenty minute ride here from the previous station, Gorebridge, and then it's another ten minutes on the train to the next.  Stow itself is a village of less than a thousand people; you strongly suspect that if the railway had been only a few hundred yards further away from the centre they wouldn't have bothered reopening it.  They didn't bother with the one at Fountainhead, for example.  As it is, the station is a spot of double track, allowing trains to pass one another, and comes with all the usual gizmos of a modern railway halt - car park, info screens, huge ramps. 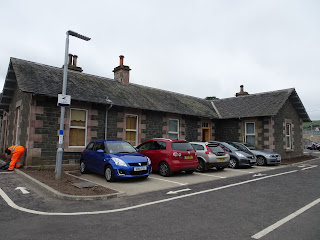 It had also retained its original station building and, unlike others I'd spotted, it was well-kept.  I'm not sure if it's a business or a private home but it looked like it was being used usefully.  I moved up to the railway bridge and snapped my sign as usual. 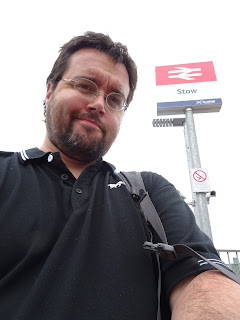 A little further on, though, I had to stop and gasp.  Stow was there in front of me and it was gorgeous. 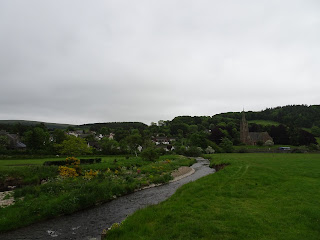 I was sold.  It didn't really matter what happened for the rest of the morning; it didn't matter what I found in the village.  I adored Stow.  Writing about it now, five years on, I'm still in love.  I want to go back. 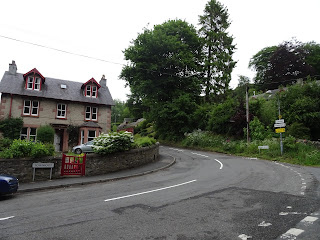 I walked into the centre, a tight knot of stone houses falling down the hill to the Gala Water, with a post office and village shop.  There was a bowling green and a war memorial and a patch of neat grass with benches overlooking the river.  All of it was sprinkled with a light mist, a clingy soft rain, as though nature had provided its own vaseline on the lens. 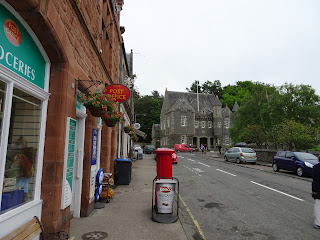 I swooned for a little while, then decided to rest in the Cloudhouse cafe and gallery for a drink.  Once again, Stow decided it would be as adorable as possible.  Inside, lying on his own special pillow, was a boxer dog.  A sign above his head informed us that his name was Yoda, he loved children, and feel free to stroke him.  I bent down and ruffled the soft fur on top of his head. 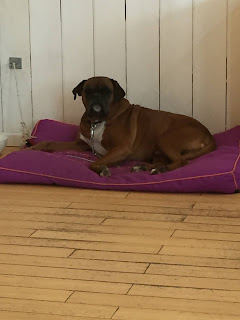 We had a boxer dog growing up, Bomber, a brindle, and so I can say without fear of contradiction that they are the finest dogs.  They're loving and fun and joyous; Bomber would leap into the air, two feet straight up, out of sheer excitement when you walked through the door.  Here is a picture of me with him in our back garden as he shows about as much interest in a ball being thrown his way as I would. 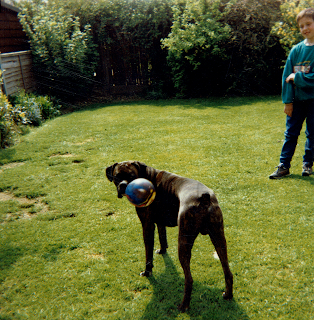 Providing a dog along with a latte was a great gimmick; the conversations I overheard were an added bonus.  Like the updates on a man who'd been trampled by a cow.  He was airlifted to hospital but was fine now.  A man came in and handed over some eggs - the owner explained to her patrons that he'd rescued some ducks the year before, and, not knowing what to do with the eggs, he simply brought them in for her so she could make cakes.  A woman in a nurse's uniform fussed over a tiny baby, who was clearly madly in love with her.  Another patron was overwhelmed by the size of the cake slices on offer.  It was all so lovely and happy and I could've stayed all day. 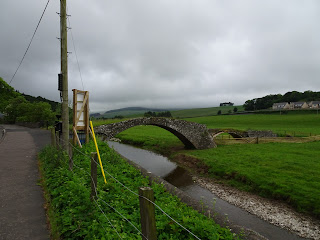 I finally dragged myself away - giving Yoda another quick stroke on the way out the door, which he appreciated - then walked out to the main road.  The A7 passes through the village and my plan had been to walk down it to Galashiels and the next station.  I was so comfortable, so cheery though, that I instead took the bus.  It was a wise decision on two fronts.  Firstly, we'd barely left Stow before the grey skies emptied, pelting us with heavy rain.  Secondly, it turned out the road to Galashiels was busy and winding and had not much in the way of pedestrian facilities; I'd have been a nervous wreck trying to negotiate it. 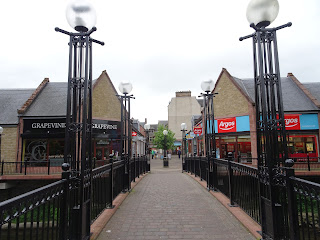 We were deposited in a large, posh bus station that also served as the railway station.  I kept my head down to avoid spoilers and headed across the bridge into the town centre.  What I found was a small, tight community, a little down at heel - there were more than the usual number of empty shops - but it was busy and the people seemed cheery.  There was an excess of what I had mentally labelled "Tartan nonsense" - kilts and Scottish gifts and shortbread - but the buildings were nice and it was a decent little precinct. 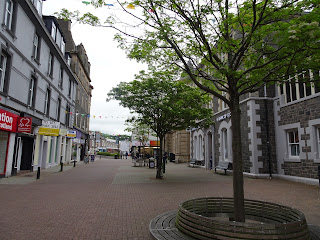 I decided to treat myself.  It was midday, and Stow's lovely cafe had got me in the mood for a nice lunch.  I don't like eating on my own in restaurants; I feel self-conscious and awkward.  But I'd been in Scotland for a few days and never eaten anything more substantial than a McDonald's breakfast so I thought it was time to enjoy myself.  I circled the town and found a pub/restaurant with a decent menu and waited to be seated.  The waitress looked me up and down and, when I asked for a table for one, immediately snapped that they had none available.  Behind her I took in the half-empty dining room with at least three vacant tables within spitting distance. 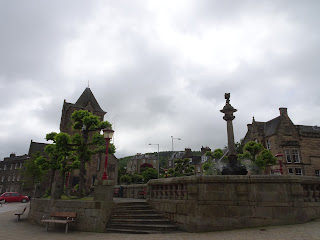 I limped away, feeling dejected and embarrassed.  The further away I walked though the angrier I got.  My money was as good as anyone else's!  I was perfectly capable of eating just as much as the next man!  I'd like to say that this resolve drove me to another restaurant where I enjoyed a fine banquet, but my bravery had been broken.  I considered a Wetherspoons, then remembered their Brexity beermats, so instead I got a pasty and a bottle of water from Greggs and went and sat in the bus station. 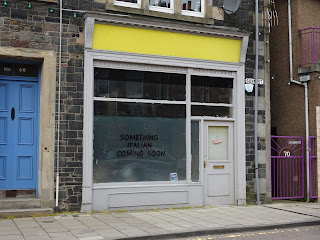 Sorry, it wasn't the bus station, it was the Interchange, with an angular glass building that seemed way too large for its purpose.  I could well imagine the architect's notes which made great use of the words "landmark" and "iconic" and "gateway" while I sat in its big echoey hall and tried to ignore the smell of urine wafting out of the toilets. 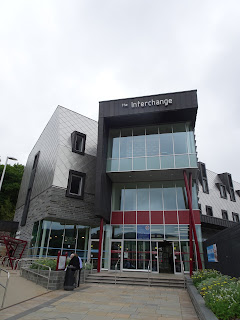 Having finished my slightly pathetic lunch I made my way up to the station platform (opened by Councillor John Mitchell).  It's not actually inside the Interchange, slightly making its name a lie; instead you leave out the back and cross a road which hugs the line so closely it can only have been built on the old trackbed. 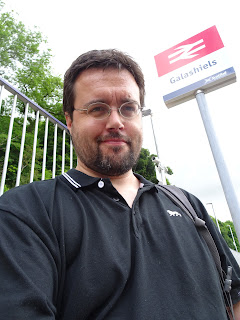 The original station was now an Asda, so the new platform had been wedged in under a wall of vegetation.  It was slightly oppressive, and certainly didn't feel like a grand entrance to the town.  Compared with the money spent on the bus station it felt especially inadequate. 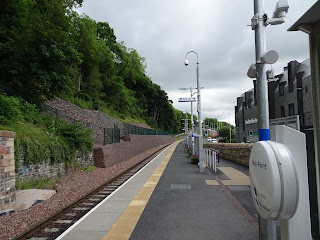 I had only one station left on the Borders Railway: Tweedbank.  The original Waverley Route had stretched much further, all the way to Carlisle, with a dozen more stations, and indeed the decision to end the new line at Tweedbank wasn't without controversy.  A couple more miles of track would've taken it to Melrose, with its abbey and the home of Sir Walter Scott, but it was deemed that the passenger numbers would be too small to justify the expense.  As with all new railways in Britain, once you get a little, you want a lot; there are campaigns to take the line on to Melrose, to Hawick, even right the way to Carlisle itself.  All good ideas and, this being a British railway, I look forward to a single track extension to somewhere quite useless in about 2066. 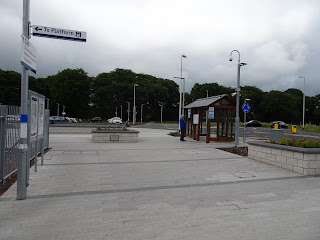 It's not a looker.  Tweedbank station combines two deadly transport concepts, being both the end of the line and a park and ride.  As such the train limps in sadly, full of exhaustion, to a landscape that's dominated by tarmac.  The sole station building isn't a station building at all, it's a crew facility. 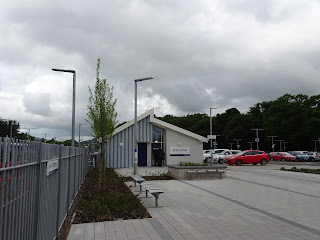 I'd come all this way and I didn't want to go back on the same train so I walked away into Tweedbank itself.  There was a map board outside the station but it was far more keen to tell me about the delights of Melrose, underlining the fact that the people who suggested the railway should continue a bit further may have had a point.  Still, I crossed the road by a large blank-faced industrial estate and plunged into suburbia. 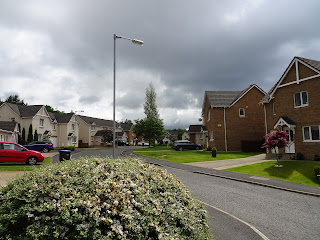 Tweedbank was originally constructed in the 1970s, with further additions twenty years later, and both sections were incredibly typical for their time.  The newer houses were detached and semi-detached, grouped irregularly around cul-de-sacs, stinking of nouveau.  The 1970s homes smacked of architectural ambition, homes that were intended to uplift and foster community.  Tightly packed houses grouped around pedestrian paths with car parking at the rear.  Long curving walks through greenery.  Underpasses beneath roads designed to whisk you off to work. 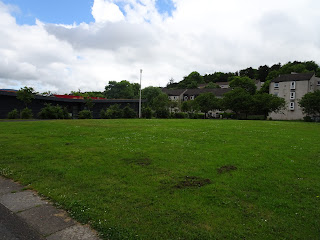 The centrepiece of the district was the Gun Knowe Loch, a big expanse of open water with fountains sputtering and a shop and pub nestled in its corner.  Somewhere along the line the pub had been upgraded and was now Herges on the Loch, a family-style restaurant that, somewhat bafflingly, seemed to be Tintin themed.  (A look at their current website reveals that they seem to have dumped this branding for something a bit more upmarket, which is a shame).  I regretted filling up on that pasty in the bus station. 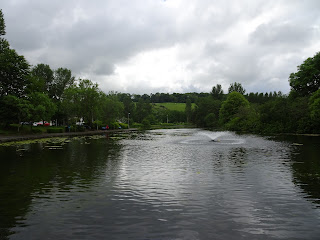 It felt hopeful.  This part of Tweedbank, not the 90s bit, seemed to have been constructed with a proper ambition to make the new suburb a great place to live.  I don't know if it succeeded to those who came here but for me, a visitor, I found it charming and likeable. 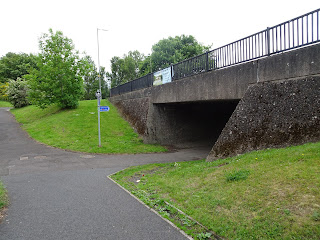 I headed back through the underpass.  I was aware that I was wandering aimlessly, killing time more than anything, and I could do that back in Edinburgh proper.  I didn't need to loiter in the suburbs.  I walked back to the station for my train.  The Borders Railway had taken me to places I'd never been and would never have visited if it hadn't existed.  It opened up a new part of the world to me.  And isn't that what travel should be all about? 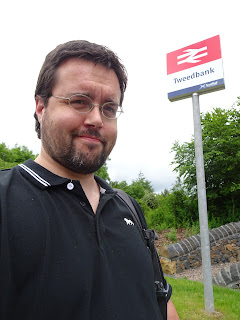 I went to Galashiels in 2011 and went in that Wetherspoons. You didn't miss much but there was something about the pubs in that town that really didn't make me want to go in them. The Wetherspoons seemed the least worse option.

Actually, Sir Walter Scott's grand home of Abbotsford (well worth a visit) is closer to Tweedbank station than it is to Melrose. But Melrose is truly charming. Tweedbank is, as you observed, not.