I absolutely understand that nobody really wants a 2020 round up, at least not one that is more substantial than a video of a person screaming while their hair is on fire.  Everything is awful, let's accept that and move on.  I do, however, want to do a little bit of housekeeping.
Let's take a look at the West Midlands Railway map, shall we?  I've crossed off all the stations I managed to visit this year. 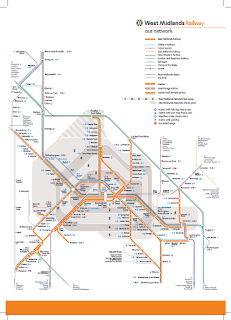 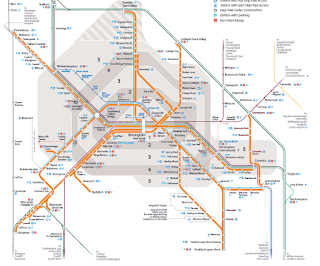 And a bit more. 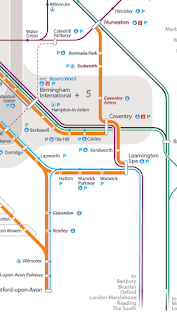 Bearley, Claverdon, Nuneaton, Bermuda Park, Bedworth, Coventry Arena.  Six stations in two trips, with the final trip on March 10th.  And that was the last time I got on a train anywhere.  I've gone nearly ten months without ever hearing the whirr of an electric engine or the chug of a diesel.  The closest I've got is (socially distantly) visiting my mum and seeing the odd train move behind her back wall.  Nothing since.  It's weird, and a little bit of me is anxious about the day I do eventually go back.  Masks and hand sanitizer and alternate seats to maintain two metres distant.  It sounds... stressful.
Anyway, those six stations changed the total number of stations done, even if it was only by a fraction.  Unfortunately, in February, West Midlands Railway also revised the map and added eight new ones (plus a tram stop) so I've actually ended the year with a net decrease in the percentage of the map I've completed.  It stands at 38% of the total, which is still not bad considering I only started the West Midlands Project in 2019.  If the pandemic hadn't spoiled things for everyone I'd have probably been at about two thirds by now. 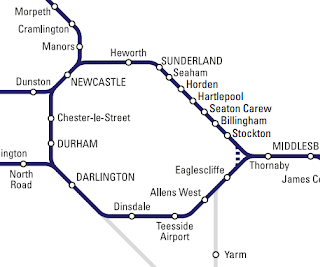 Elsewhere in station news, Horden railway station was added to the map, between Seaham and Hartlepool.  That'll have to be visited someday, of course.  Perhaps I'll treat myself to a week in Newcastle and polish off the Metro while I'm there; it celebrated its 40th anniversary this year and I've always wanted to whizz around it.  Assuming the vaccine hits and civilisation as we know it fails to collapse.
I also have a small query.  Over the autumn I recapped my trip through North Wales, something I'd done for a book idea but which never went any further.  It took me a while because I had to reach into my memory banks and I also had to try and decipher my scrawls in my battered notebook.  But the question is: would you like more of this kind of thing?  Here's the other places I visited in 2016 but haven't written up: 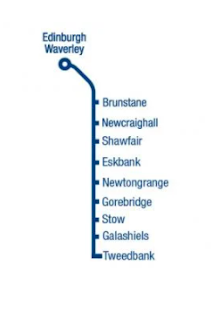 The Borders Railway from Edinburgh to Tweedbank

The Wherry Lines from Norwich to Lowestoft and Great Yarmouth 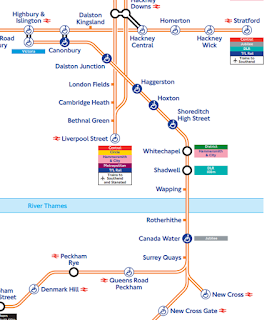 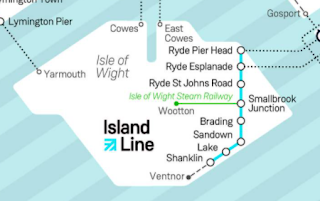 The Island Line from Ryde Pier Head to Shanklin
So would you be interested in me writing that up?  It'd give me something to do, it'd keep the blog from dying, it'd pass the time.  On the other hand, five year old observations about the railways aren't exactly fascinating - I was doing the Wherry Lines the day of the Brexit Referendum and are we really sure we want to drag all that up again?  It might be interesting but I haven't written it up so far so there might be a reason for that, you know?
Have a mull and let me know what you think, either in the comments here or on Twitter @merseytart.  In the meantime have stay at home in front of the telly, open some wine, and have a good New Year.  We'll all be back together one day.
Posted by Scott Willison at 11:31

We will drink again x And we will ride again (fnarr)

As it goes, I've been thinking of getting back into long-form blogging again in 2021, so that'll be me, you, and Diamond Geezer as the only three of us left by the Heat Death of the Universe.

I'll say go for it. Don't dredge up Brexit if you don't want to. Write what you can about each one, the distance in time can become a feature.

Here's to next year x

Yes please do it. Glenda

Please write up on the East London Line stations... I work down there so will be interesting to see you views.

Oh, please Scott.
Do them all if you want.
Your writing doesn't age, and it'll be like history too xx

(sorry, that was me)

Absolutely, get on with it!

I agree with Diamond Geezer - write it up

I love your writing, so the more, the better. Write them all up :)

Yes it gives me something to look forward to reading, even if it was a few years ago.

yes, please write things up, your style doesn't age just because it was a few years ago.

Would love to see you get a 3 week Japan Railways Pass and do over there. Shinkansen, Tokyo etc. Really modern, clean and efficient with the added bonus of no scallies, smackheads or litter.
Maybe some rich benefactor could sponsor you. Bey you're blog visitors would go through the roof.
Keep positing any journeys though as this is one of the best blogs out there.