Here's another instalment in my journey down the Conwy Valley Line.  A quick reminder that this all happened in July 2016, so no lockdowns were broken.  It also means that some of what's below might no longer be accurate.  Blaenau Ffestiniog may have burnt to the ground in the intervening four years; I'm afraid I have no idea. 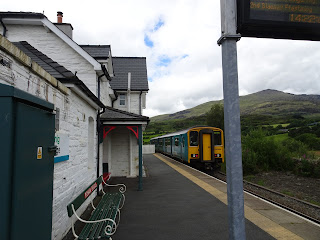 Now I don't want to imply that Wales is a little... let's be generous and say, retro, shall we?  But there was a phone box on the platform at Roman Bridge.  With a green Cardphone logo.  BT stopped issuing Phonecards in 2002, so somehow this branded call box had managed to cling on for decades more.  It looked like it had been adapted for credit card use as well, so technically the logo was still accurate, but it still gave me a nostalgic rush.  It flashed me back to queuing by the phone box at my hall of residence to call my mum on a Sunday morning, a queue that started out quite lengthy in September, and had basically vanished by November as all the students found better things to do than reassure their parents that they were safe and well.  Sleep, mainly. 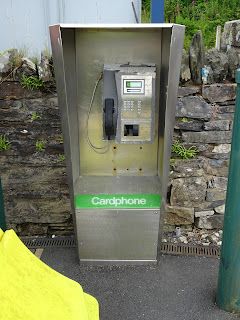 Roman Bridge wasn't the next station along the line from Pont-y-Pant; that was Dolwyddelan.  The difference was that Roman Bridge was request only so I'd taken advantage of being the only person to board at Pont-y-Pant to ask them to stop.  I was now going to go back up the line. 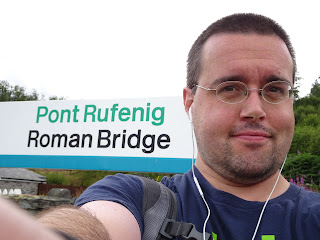 Sign pic taken - there was no totem, unfortunately, further underlining Roman Bridge's status as a forgotten halt - I headed out onto the road.  The A470 connects the two stations directly but that looked like a dull route to take to me.  Instead, looking at the Ordnance Survey map, my eye had been drawn to a footpath that passed above the railway and the river, skirting the edge of the mountain and passing an old quarry.  That looked far more interesting. 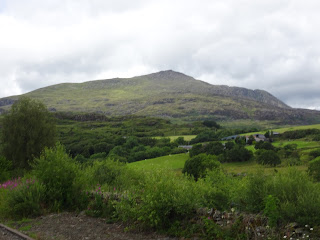 As usual, Wales insisted on being breathtakingly beautiful at all times.  I felt refreshed after my little pause at Pont-y-Pant, reinvigorated even, and I pushed out optimistically.  For a little while I followed the main road, then I spotted my turning, a narrow road that passed back over the tracks. 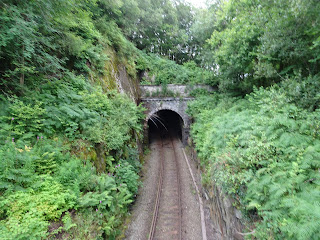 I stopped.  The footpath went right through a cluster of buildings - a farm, and it seemed to go straight across their land.  Now I'm sure there are people who would simply stride across the farmyard, brandishing their map and shouting "public right of way, step aside!".  Julia Bradbury would do it, and probably tease some effortlessly charming historical factoids out of the farmer while she did it.
I am not that kind of person.  I respect privacy, and also, farmers have guns.  I didn't fancy Falmer Palmer screaming "GET ORF MOY LAND" (not that he would, this was Wales, he wouldn't have a West Country accent).  I backed away slowly, hoping I hadn't been seen hovering nervously in their driveway, and returned to the main road. 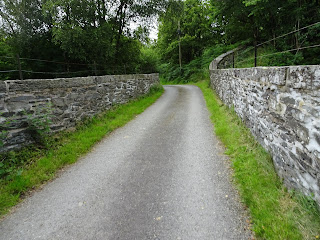 I almost immediately found a reason to jump off it again.  A small plaque informed me that the road had been upgraded in 1998, and you could tell from its long gentle curves and wide clear tarmac that this wasn't a historic by-way.  Tucked behind a gate, however, was the old road, a much narrower route that crossed the Afon Lledr via a stone bridge, the Pont-y-Coblyn. 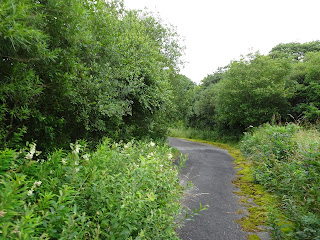 Always take the side path when you can.  You find worlds that are hidden, places that are concealed, histories overlooked.  You find beauty.  If I'd stuck to the A470, I'd have hiked along a grass verge.  Instead, I paused on an old bridge and watched as water cascaded down a waterfall, alone, silent. 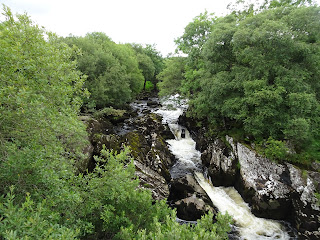 Eventually I tore myself away and rejoined the main road.  The verge was generous, so I didn't feel quite so vulnerable to the traffic, and taking this way meant I'd reach Dolwyddelan in plenty of time, so I basically sauntered along.  It was a warm Saturday afternoon and everything felt very relaxed and lazy.  Nobody was in a rush.  The car park of Dolwyddelan Castle was half-filled, day-trippers making their way home having seen all they needed to. 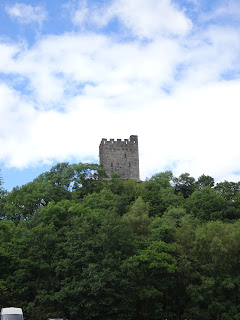 Soon I was on the outskirts of the village itself.  Small grey houses scattered along the path, with others clinging to the hill above.  Parked cars wedged onto the pavement.  Then I was at the centre, a crossroads with a pub, a church and a shop on each corner.  The fourth corner had a post box outside and the front was newly plastered and, I guessed, had once been the post office, to give you everything you needed in one place. 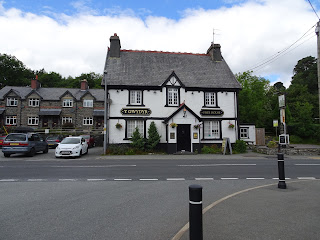 I went in the shop to get a snack and realised I didn't have any cash.  I'd only wanted a packet of mints, but I felt obligated to spend a fiver since I was using my card, so I added a couple of bottles of Coke and a sandwich and a packet of crisps to justify the transaction.  It's the banking industry's fault I eat so much.  It was a packed Spar, the kind of place that has to cater for every possible need a village could want, with narrow aisles and high shelves, and I fell out onto the pavement.
I had an absolute age until my train and the pub was closed.  What sort of country pub closes on a Saturday afternoon?  I wondered if this was one of those weird Welsh temperance villages where they'd finally acknowledged people liked a beer but allowed it only grudgingly, on the third Thursday of the month, and only serving halves.  Instead I wandered about the village, taking in the noticeboards.  The village cinema's upcoming showings were Angela's Ashes, The Lady in the Van and Suffragette - a fine trilogy of middlebrow, uninspiring, "quality" films that wouldn't offend anyone.  I'd missed a WI meeting with a talk from "The Soap Angels from Talsarnau".  The council were going to block up a footpath for six months "for reasons of danger to the public" while works went on. 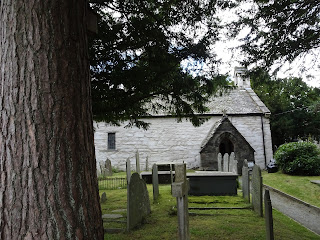 I took a turn round the churchyard, vaguely looking at the gravestones, then I finally took up a seat in the garden round the War Memorial.  My feet let out an exhausted sigh; I hadn't realised how tired I was until I sat down.  I swigged my Coke while bees hummed round the flowers and drifted away, my brain sinking into silence, my body relaxing.  I felt my eyes sagging, over and over, and had to drag myself awake again.  How long was it since I'd left Llanrwst?  How long since I'd been in bed? 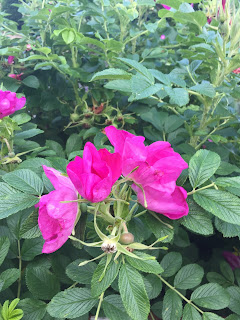 Nope.  I pulled myself up and forced myself to walk down the road to the station.  I was nearly done for the day.  The train would be there soon enough.  I crossed the river and walked across the car park to the platform. 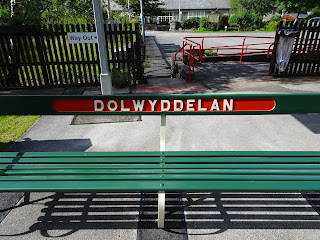 You could feel the village's pride in their little country station, with its floral displays and its carefully painted benches and its heritage signage.  A small plaque on a lump of slate commemorated 130 years of the Conwy Valley Line, back in 2009.  The only thing it was missing was a decent station sign. 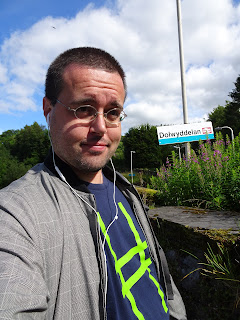 I paced the platform, stirring myself to stay awake, bouncing up and down and playing a podcast loudly to try and keep my mind stimulated.  Finally a train arrived and me and the couple of other passengers the station had attracted were able to climb aboard and head south
At first the route was the familiar, beautiful Wales I was used to.  Green hills, dancing water, trees swaying gently.  Beyond Roman Bridge however it seemed to darken.  The skies, previously blue and bright, turned gunmetal.  The grass became scrub.  Soon we vanished into a long, dark tunnel, and when we re-emerged, it was as though we'd travelled into another world.  The mountains had been torn apart and reshaped into ugly lumps.  They were stripped of vegetation and their slate chipped out and carried away.  It was a grey, harsh, cold town.
The train stopped.  This was Blaenau Ffestiniog.
Posted by Scott Willison at 12:34

Ha. Sorta like my accident -
into l'crevase, me jolly lad!
GBY