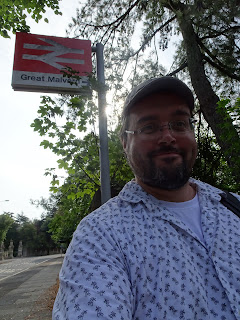 I'd only been walking through Great Malvern for a couple of minutes, but it felt... different.  I followed the imaginatively named Avenue Road and tried to work out what it was.  Finally it hit me.  I wasn't in England any more.  I was in Europe. The trees were tall evergreens, pointed and shady.  The roads curved gently, lined with regal looking villas set back into the hillside.  In the distance, high grassy peaks broke the horizon.  Squint a bit and you could be in Germany, or Switzerland.

This is, of course, because Malvern is a spa town, so it's natural that the architects and planners looked to the Continent when it was laid out.  Malvern water has been famous for centuries, but it wasn't until the 18th century that it became fashionable, and the town really took off as a place to be in the Victorian era, with the Queen herself reportedly carrying a bottle everywhere she went.  There were dozens of hotels and boarding houses in the town, with Great Malvern at the centre of the industry. 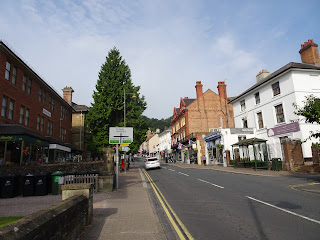 It felt clean and healthy.  Something in the air.  I could believe you'd come to Malvern from a grime-choked industrial city and feel better immediately.  The railway brought both those looking for restorative cures and day trippers keen to experience the restorative water. 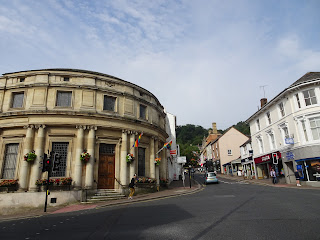 I turned north at the crossroads that marked the centre and walked past the beauty salons and hairdressers and coffee shops that make up the commerce in a well-to-do town.  It was resolutely middle-class, moneyed but subtly so; there wouldn't be sports cars, just SUVs and silent hybrids.  A woman carrying a basket walked past the Great Malvern Hotel wearing a mix of beiges and blues; she could've come from any decade in the last hundred years, stylish but discreet, beyond fashion.  There was, of course, a Waitrose, plus furniture stores full of nick-nacks and a bridal shop.  Even the Indian restaurant was called Flute rather than something a bit more genuinely subcontinental. 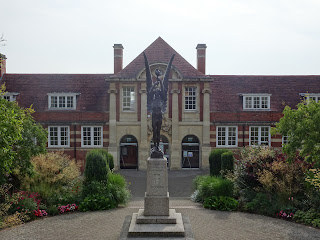 At a pedestrian crossing, a couple of dads with their four kids were milling about waiting for the lights to change.  An elderly woman with a shopping basket approached them and said, firmly but politely, "if you move to the back of the pavement, there will be room for me to pass."  Then she raised an arm and herded them against the wall.  Once they were in place, she smiled and walked on.  The two men looked at one another, a little baffled, a little confused, wondering what had just happened.  She'd not said "excuse me" or anything, just instructed and corralled.  That's being properly posh.  You're absolutely certain that everyone else is there to do as you want them to. 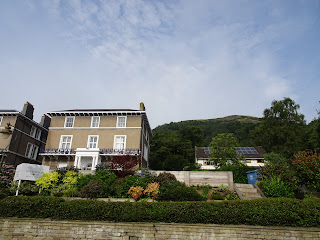 The road I was on was cut into the hillside, with homes above and below me.  To the left, they showed me their best side, as the houses aimed windows and gardens at the view.  On the right, they were much meaner, as I got the practical backs and dark walls and garages. 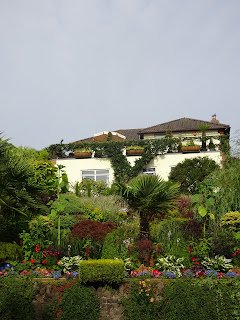 A lot of the houses were now nursing homes.  I imagined it would be a lovely, peaceful place to retire to, but I wouldn't fancy trudging up and down the hills with arthritic knees.  I was headed for the town's other station, Malvern Link, which sounds like a terrible modern day name like "Parkway" or "Interchange", but is actually considerably older and named after the nearby Link Common. 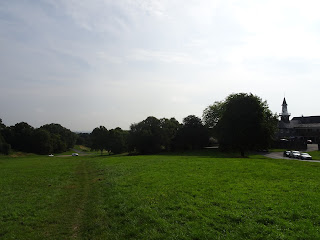 I trudged across the grass.  It was very early on a Saturday morning, barely ten o'clock, so I had the common to myself.  I had of course planned on visiting the day before, after Colwall, but had been too tired.  I was glad now.  On a sunny Friday evening there would've been people all over the grass, picnickers, footballers, sunbathers.  Now it was just me and my thoughts. 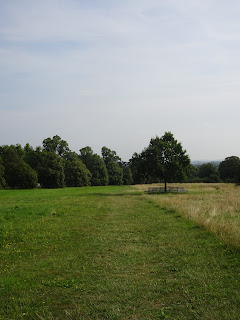 On the other side, by the road, I found a drinking fountain.  Until a few years ago, you could buy Malvern Water in any shop in Britain; it was owned by Coca-Cola and was a common brand.  Unfortunately, in the 2000s, a drought dried out the source and the water had to be filtered.  This meant it was no longer mineral water, but was instead spring water; a subtle but telling difference.  Not long after Coca-Cola closed down the bottling plant entirely.  There's still a plant producing artisan water for sale, but as you can imagine, it's on a much smaller scale.  This drinking fountain looked like my best chance to actually taste the waters. 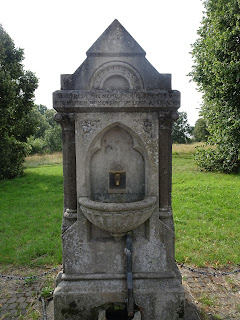 Fortunately, unlike the one at Eastnor, this tap was in full working order.  I took a mouthful and then topped up my water bottle.  It tasted of... water.  It's probably corporation pop, rather than the more exclusive spring water, but it was still refreshing after the stroll across the common in the morning sun.  I thanked the British Women's Temperance Association for installing it.  I might disagree with their cause - quite vociferously - but I liked their generosity. 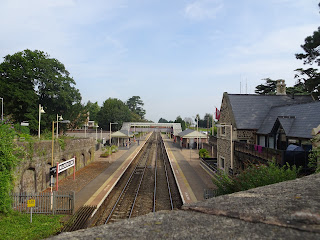 A dart across the road and I reached Malvern Link station.  The old station house had been sold off as a private residence, and the new building was more or less a waiting room with a ticket office wedged in it; clean, efficient, but hardly inspiring. 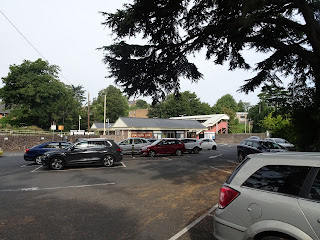 I took the obligatory sign picture then wandered down to the platform. 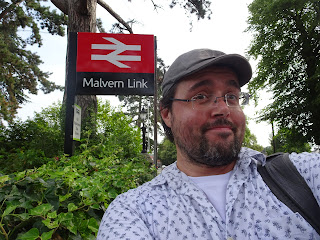 It turned out I'd just missed the next train back to Hereford, and the next one wasn't for nearly an hour.  There was, however, a Great Western Railway train to Great Malvern a few minutes later.  I boarded the starkly modern Class 800, painted in that beautiful version of British Racing Green GWR use, and took a seat in a kind of dove grey coloured space ship. 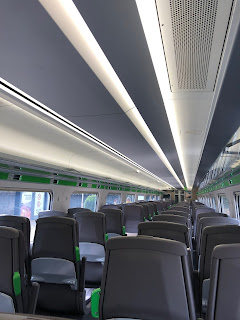 I had two reasons for returning to Great Malvern station.  Firstly, it gave me something to do rather than loiter on a platform.  Secondly, it was a really nice station. 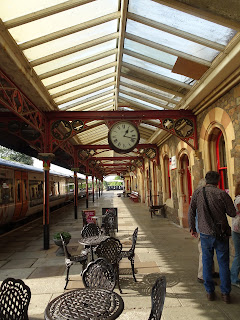 It had clearly been built by the Victorians with the aim of impressing those out-of-town travellers, and so it had a subtle grandeur with delightful little touches.  The columns supporting the roof, for example, were decorated with ironwork leaves and flowers at their top.  It wasn't perfect - the station clock wasn't working, which really grates when it's as prominent and attractive as that one - but it was a charming small town halt. 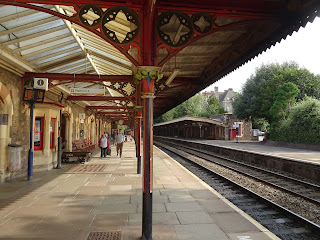 On top of that, it had a proper station cafe, tucked inside the main building.  I went in and ordered a cup of tea and sat in a corner.  It was exactly as station cafes should be - a moment of calm.  I was sat underneath a big picture of Celia Johnson - because everyone who runs a buffet thinks they're in Brief Encounter - and sipped my tea and waited for my train.  Take a spa day to Malvern.  It'll do you good. 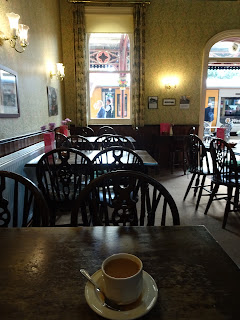