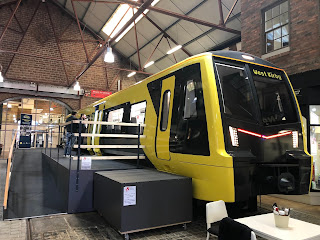 I'm not a train nerd.  I mean, I am, but I'm also not.  There are whole subcategories of train nerdery.  I like the stations, I like the maps, I like the lines.  The actual trains?  Not bothered.  Are they clean and fast and quiet?  Great, thanks, that's all I need to know.

I do like new trains, in the sense that I like that there are new innovations and technological advances being spread onto the network.  (This is one of the reasons I despise the D-Train - it's an old train that's been tarted up a bit).  But I'm fascinated by new tech in general.

In short, this is going to be a recap of my visit to the prototype of the new Merseyrail trains, and if you're really into rolling stock, you're going to find it very shallow and irritating.  On the other hand, if you're just someone who happens to use Merseyrail on a regular basis, you might find it illuminating. 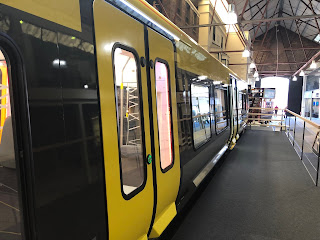 The first impressions are very good.  We were greeted by a member of Merseyrail staff, who proudly showed off the new features.  One of the most notable is also one of the most controversial - customer operated doors.  These are one of the causes of the Merseyrail guards strikes that plagued the network, but they're still there.  Push the button and a small step slides out to meet the platform edge; this enables level boarding for wheelchairs and prams, and is the first time it's been seen in the UK.  It's also why all the stations are being closed in shifts to have their platform edges adjusted to accommodate the sliding step. 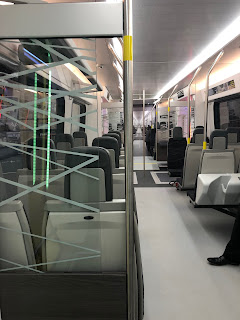 On board it's as bright and shiny as you'd expect from a new train.  These will be space trains, so it'll be possible to move from one end to the other with no annoying doors between carriages.  Bars are provided for standing commuters.  In the door vestibules there's a pole in the middle to grab hold of, though the staff lady did say the design would be changed on the real trains.  At the moment it's just a single bar but people realised that on a Saturday night that'd become something for people to twirl on; it's going to acquire three outer handholds to discourage this.  Looks like my dream of recreating Nomi Malone's iconic pole dance from Showgirls somewhere outside Freshfield will have to wait a little longer. 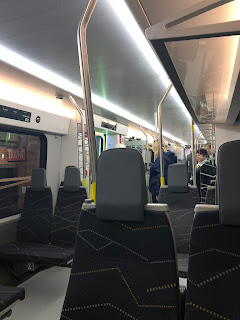 The new seats are... ok.  They're a mix of fours so you can sit with your mates and airline style, meaning there are more seats in every train, and they come with headrests and plug sockets and tiny tables for your cappuccino.  Some of them fold up, and the single seats now face forward so that, for example, mothers can sit alongside their pushchairs.  They were, in the opinion of my buttocks, less comfortable than the existing seats.  They felt like they were made out of some kind of hard foam.  Perhaps they'll soften with time. 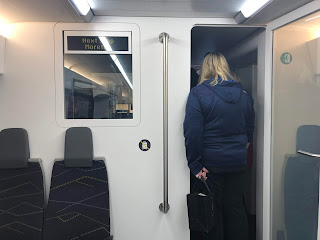 The driver's cabin has windows in it so you can spy on him and see where you're going; at the push of the button the driver can turn the glass opaque for his own privacy.  I'm guessing the glass will be opaque 99% of the time.  I didn't take try the driving seat, so please enjoy this picture of it being modelled by friend of the blog Paul: 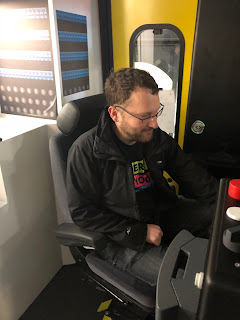 It looks a lot comfier than the passenger seats.

My favourite feature of the new trains ("Class 777" if you're nasty) is the moving next train indicators.  On the prototype they're just photos, but on the finished trains there will be LED screens showing the line route and updating in real time with your position. 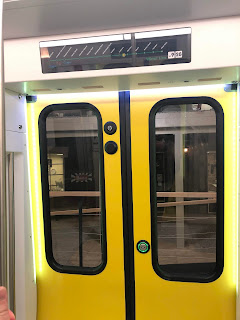 LED screens in the cabin will also tell you what the next station is, and it all looks lovely.  I'm shallow like that.  Stick a glowing TV screen in anything and I'm sold.  The rest of the train could've been an open carriage with bench seats and I'd have been captivated by the shininess.  Just to really get me excited, there'll be free wi-fi, even in the tunnels - a side benefit of the new CCTV, which is live streamed to the control centre.

The train prototype was on display in Pacific Road in Birkenhead until today, but it will be moving to Lime Street in the near future for you to have your own gawp at it.  That smiling LED at the front of the train will then be heading to a station near you in 2020.  I'm quite pleased. 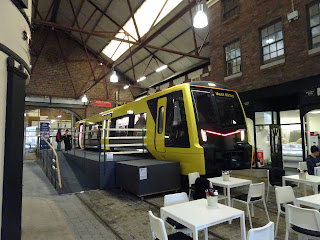