The Giants are coming back to Liverpool!  Hurray!  Royal de Luxe's spectacular puppets will be walking the streets of the city for the last time, creating a fascinating entertainment experience.  That's brilliant news, isn't it?  Tourists everywhere, fantastic images on the news, a superb showcase for the city region.

And of course Merseyrail will be getting behind it.  As the region's main transport provider, they'll be straight in there to help get people around won't they?  The answer is yes, they will, but if you want to do anything else - tough.


In order to keep the city moving during the @GiantSpectacle in October, we'll be making changes to our timetable and closing certain stations across the network. All information can be found here: https://t.co/FrTYgmAbFe pic.twitter.com/8gIDH0BNXi
— Merseyrail (@merseyrail) September 20, 2018

With two weeks to go, Merseyrail announced a swathe of changes that'll severely damage the service.  The West Kirby and New Brighton lines lose a train an hour, going from four to three.  All the Wirral Line trains heading south will terminate at Hooton, with a shuttle service heading to Chester.  Ellesmere Port trains won't run.  Southport line trains will terminate at South Parkway.  They've culled and chopped to try and get the trains as full and on time as possible.

But that's not the worst part.  The worst part is the station closures.  On Friday, Saturday and Sunday, nearly 30 stations will be simply closed.  That's it.  No trains will call and no staff will be provided.  You can find the full list here.  Basically whole swathes of the Northern and Wirral lines will become inaccessible as Merseyrail concentrates on running fast trains to get people to the Giants.  Just the Giants.  Nothing else matters.

Here's the regular map of Merseyrail: 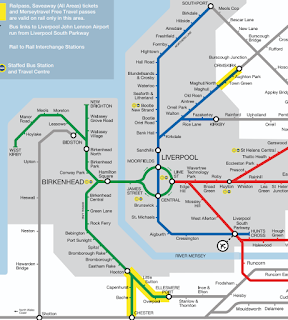 And here, thanks to the wonders of MS Paint, is the Merseyrail map on the weekend of the Giants: 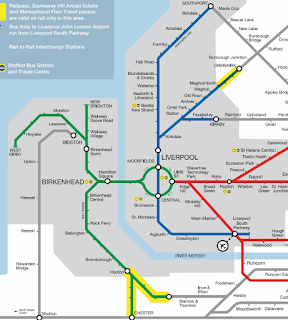 It's a shockingly reduced service throughout the whole region.  To give you an idea of some of the worst parts, I've turned to Google Maps. 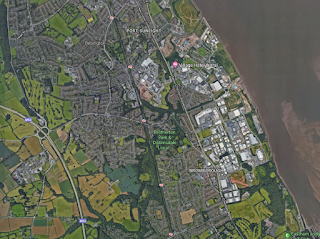 This is the eastern side of the Wirral.  Running through the centre, you can see the railway line, with five stations.  The middle three - Port Sunlight, Spital and Bromborough Rake - will all be closed that weekend.  Look at the land around it - that's a lot of homes and businesses that are losing their regular rail service.  Arbitrarily.  Suddenly.

Here's the north of the Wirral.  Hoylake, on the far left, will be open, as will Moreton on the far right.  Meols and Manor Road in the middle, though, will be closed. 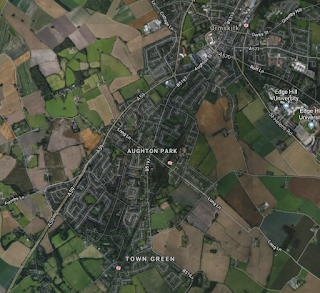 Ormskirk will remain open, but those two stations at Town Green and Aughton Park will close - leaving those two villages without any train service at all.

It continues along those lines everywhere.  Bache - handy for Chester University and the Countess of Chester Hospital - closed.  Conway Park - a station specifically built to serve the shops of Birkenhead town centre - closed.  Capenhurst - basically the only public transport to the huge industrial plant - closed.  Bootle Oriel Road - where most of the town's offices are located - closed.  In Liverpool, James Street and Lime Street on the loop will be closed, with Wirral Line services only calling at Central and Northern Line services only calling at Moorfields.  Need to get a London train?  Hope you enjoy schlepping across the city centre with your luggage.

Worst of all is poor old Hightown.  This village on the Sefton coast has a station with a four trains an hour service running through it.  On the weekend of the Giants, it won't get anything at all.  Take a quick look at the satellite view of Hightown. 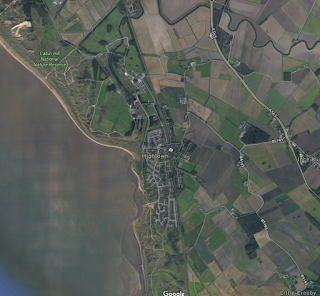 The railway is basically the only way out of the village.  If you've not got a car, you're staying there all weekend.

It's a horrible mess, and it kneecaps thousands of Merseyside residents for no reason other than "performance statistics".  There will be a single replacement bus service, for the residents of Ellesmere Port, after the local MP objected to plans to just not run any trains on that branch at all.  Yep, Merseyrail's original plans were to deprive a town of 55,000 of its regular rail services, and it was only when a politician intervened that they grumblingly did something about it.

The Giants Spectacular is a huge event, absolutely.  But it's not the only thing happening.  Friday the 5th is a regular working day; people will have to get to work.  People will still want to go to Chester or Southport or Birkenhead to shop on the weekend.  People have places to go that don't involve huge puppets, and those journeys are going to be disrupted and ruined.  With two weeks' notice.

Even some of the details seem ill-thought out.  Sandhills will be closed, so if you need to change between the Ormskirk and Southport branches, you're going to have to go into Moorfields whether you like it or not.  Closing Lime Street Underground has a similar effect - making it exit only would at least take people who are just heading to, say, Manchester, off the city streets and out of Central.

And why aren't there any replacement buses?  If you're going to close stations, do it right.  Create railheads at big stations then run buses to the intermediate stops to get those passengers on board.  Make the Wirral Line Birkenhead Central - Rock Ferry - Hooton only, but have buses dropping people off in the gaps.  If you're going all the way to Liverpool, brilliant, but if you only want to get from Eastham Rake to the retail park at Spital, you can still do that.

This all smacks of panic at Rail House, a horrible realisation that they can't cope and so they've just pulled the communication cord to try and stop the disaster.  The Giants were announced months ago; Merseyrail should've been planning for it right from the start.  Imagine if, during the Olympics, TfL had said "there will be a great service on trains to the Olympic Park, but we're closing the District Line to compensate."  It wouldn't have happened because they planned and budgeted accordingly.  Merseyrail seems to have blundered along and not done any modelling at all.  If they'd announced in, say, June, that there would disruption to the services, people could've planned ahead - you could book the Friday off work, because getting into the office would be a nightmare, for example.  It also has a negative message for people in certain parts of the region who do want to see the Giants; a kind of "West Kirby and Hoylake can go, but Meols and Birkenhead Park will have to stay at home" division.  They'll get in their cars, I suppose, because I'm sure it'll be really easy to drive to Liverpool and the park and rides at the open stations won't be full at all.

It's a mess, a horrible mess, and I sincerely hope Merseytravel take Merseyrail to task for it when it's all over.  In the meantime, spare a thought for the poor people of Hightown.

I have emailed various industry bodies regarding this as Merseyrail are breaching their Franchise. Have a look at:

Also try aheath@merseyrail.org to go to the top!