He's Dead But He Won't Lie Down 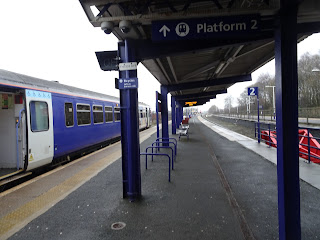 I like ticket gates.  I think they're a great idea.  They instantly make a station feel more secure and they help to ensure everyone's paid for their journey.  Marvellous.

At Rochdale, they've put in ticket gates just behind the entrance, on the ground floor.  The problem is, the ticket office is at platform level.  So if you haven't got a ticket, you have to ask the person on the gates to let you through so you can buy one.  And then you go upstairs without any further checks, so you don't actually have to buy a ticket at all; you can get away with it very easily.  This seems to be a significant design flaw. 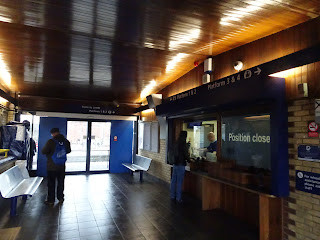 Still: I wasn't in Rochdale for the trains, I was here for the trams.  (Old habits die hard).  Rochdale is the terminus of one of Metrolink's arms, on the edge of the Pennines at the very limit of old Lancashire.  There's a tram stop right outside the station, as you'd expect, but I turned away from that to walk into the town centre. 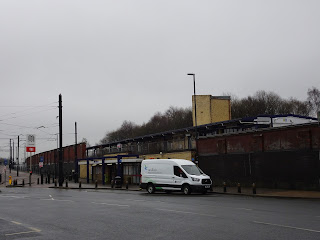 I took Milkstone Road into town.  At its corner was a large open-fronted food store, its forecourt dominated by an array of fruit and vegetables.  Two women in hijab picked through the oranges, expertly examining each fruit before dropping it into their bag with a flourish.  They didn't take their eyes away from their shopping but managed to carry on a constant, excitable chatter throughout.

Rochdale has a huge Asian minority, and Milkstone Road seemed to be a local centre for them.  There were takeaways and restaurants, travel agents, a boutique selling intricate abayas.  The window of Kamran's Sweet Centre had rack after rack of mysterious cubes of brightly coloured treats that I knew would be concentrated tooth rot.  I don't have a sweet tooth at all - give me a pasty over a pastille - and I suspected that I'd melt if I just walked through the door. 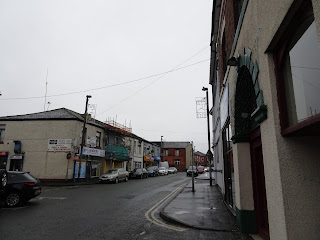 It was a bit of a surprise to find the road terminate at a church, instead of a mosque, but that's Rochdale; England clashing with Asia over and over, mixing and reproducing.  The mix made me think back to Luton, growing up in another town with a large ethnic minority.  Milkstone Road there was Bury Park, just outside the town centre, with the same mix of chicken shops and grocers and the Mosque poking out from behind terraced houses. 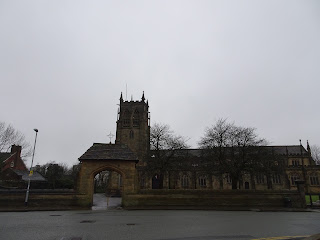 I cut through the churchyard and descended a terrifying set of steps.  Hundreds of years of feet had worn them smooth, and they were slick with rain.  I was wearing trainers, as I'm between walking boots, and I was absolutely convinced I was going to slip down them to my death.  I pulled myself together when a much larger pensioner passed me, taking the steps almost two at a time. 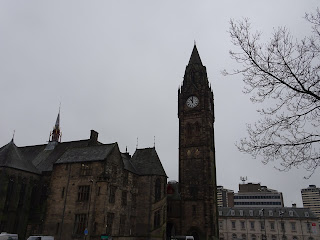 The comparisons with Luton ended at the foot of the steps, since Rochdale Town Hall is finer than any building back home.  Built with cotton wealth it positively gleamed, even on a miserable February morning. 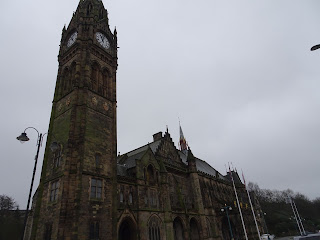 It's a Gothic confection, elaborate and beautiful, with a clock tower that rightly dominates the town around it.  I loved it.  And the town has been respectful in return, with its neighbouring buildings dignified and elegant and not seeking to outshine it.

There was also a statue to Rochdale's most famous daughter.  Sadly not The Artist Formerly Known As Beth Jordache, Anna Friel; Gracie Fields. 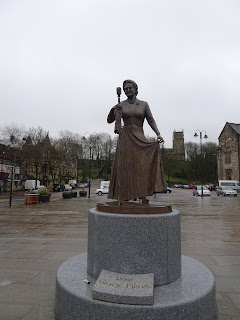 Gracie is one of those artists whose appeal, in 2018, I have problems fathoming.  I had a look at a few of her performances on YouTube and she doesn't click.  People are absolutely howling at her gags, and swooning at her singing, and it all seems a bit (whisper it) dreadful.  I suppose in the 1930s they were just pleased to have anything entertaining, what with the Depression and the looming threat of war and the fact that the Xbox hadn't been invented yet.  It's one of those things you have to just file under "it was a different time".  I imagine youngsters are having a similar reaction to the Top of the Pops repeats on BBC Four, turning to their parents and asking "but why did people buy Russ Abbot's Atmosphere week after week?"  (The correct answer is "because it's awesome", though I suspect I'm in the minority on this.) 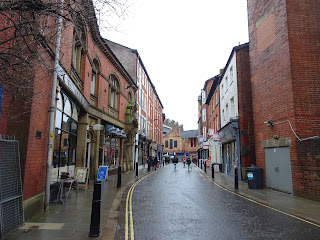 I climbed the steep hill into the town centre.  Most of the shops seemed to have been hived off into precincts I had no interest in visiting - a shopping centre is a shopping centre, and they all look the same - so I walked among the pound shops and cafes and Greggs that circled them.  The Beales department store had closed, but it didn't seem to be in bad shape, all told.

I descended some more steps (the disadvantage of being so close to the hills) and ended up on a bare patch of land surrounding the tram stop.  This had once been the location of the town's municpal buildings, but a programme of comprehensive demolition saw this quarter of town rebuilt.  The council services were relocated to a new office building across the way, No. 1 Riverside, a large bus station was built, and this patch of open parking was due to be turned into a new cinema and shopping complex.  A banner flapped in the wind, notifying me that the the car park would close on the 26th to allow construction to begin; this is despite the anchor tenant, Marks and Spencer's, pulling out last autumn. 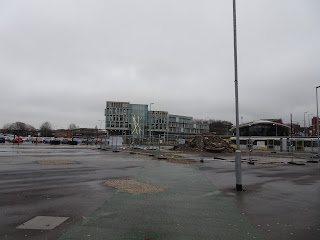 Everyone else seemed to be walking into No 1 Riverside, so I decided to have a look for myself.  It's an odd hybrid building.  The ground floor was the library, but unlike any library I'd ever been in before; it was more like a very large foyer with bookshelves in it.  There was no demarcation between different council services.  You could pick up a Margaret Drabble and queue for your licensing application without moving more than a couple of metres.  Members of staff stood around next too single computer terminals, looking helpful and friendly, but I couldn't quite work out what they did - were they receptionists?  Were they librarians?  Could they help me apply for Council Tax Benefit?  Nothing was signposted either.  Open government is all very well, but sometimes you want someone to just hold your hand and guide you where you need to go. 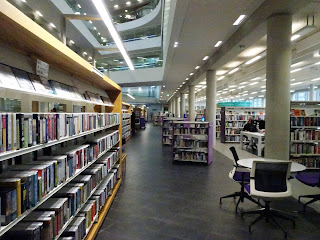 I eventually found a toilet, so at least I was able to have a pee, and then I stumbled my way back out again.  It's a very good building, and there was a case of awards in the entrance, but I'm old fashioned.  I like a nice sturdy Central Library building where you're shushed for having squeaky shoes, not some happy friendly building with a coffee shop and "breakout spaces". 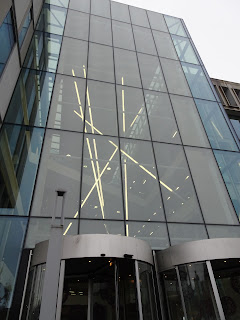 The tram stop and the bus station sit alongside one another as all proper transport interchanges should.  The bus station was an elaborate confection of overlaid shields; it was absolutely enormous, a confident shout from TfGM. 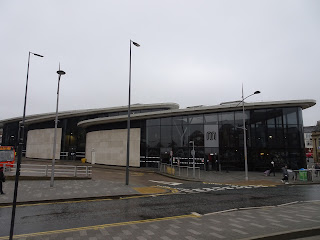 Next to it, the tram stop looked positively weedy and inconsequential, and yet that was where I was headed, because trams are sexy and buses aren't.  Sorry. 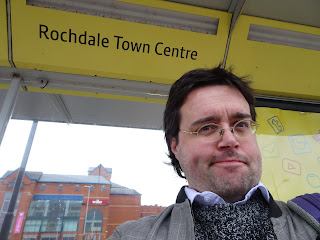 The tram trundled back out of town, climbing the steep hill towards the railway station.  I'd decided to collect that stop at the end, as the climax to this thrilling journey, so I stayed on board.  It climbed up from the street to the railway viaduct and then the driver put his foot down.  You could feel his glee at being on segregated, fast running tracks; we were almost thrown back in our seats by the g-force.  There was a palpable sigh as we slowed down to the stop at Newbold. 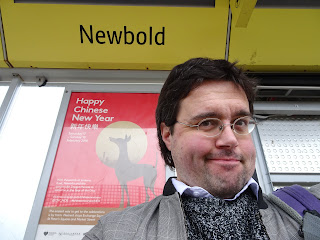 Now I have a pretty good head for geography.  Drop me somewhere unknown, and I'll soon be able to get my bearings and work out where I'm going.  I'm therefore embarrassed to inform you that immediately after taking this photo I got lost in Morrison's car park. 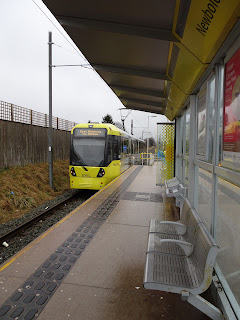 The platform had been filled with old dears intent on chatting rather than moving, so I'd slightly grumpily threaded my way through them and out the exit.  In my rush to leave, I hadn't noticed there was a side path that avoided the supermarket and headed straight for the road.  Instead I was dumped on the outskirts of the car park without much clue how to get out.  Understandably, Morrison's had designed it to funnel you to the store entrance, and I ended up there first; when I took what I thought was the footpath out, though, I ended up by the loading bay.  So I went back to the store and tried a different path, and there it was, hidden behind the bushes, dropping down away from the level of the car park and finally sending me out onto the road.  I guess they don't get many pedestrians doing their shopping there.  Or maybe I'm just a bit thick. 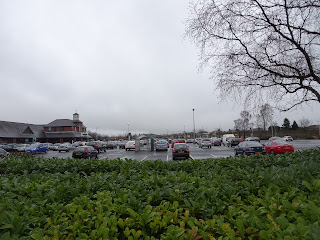 I nipped across the busy Kingsway and into a cul-de-sac, heading for the Rochdale Canal behind.  A dog walker called to his golden retriever as I crossed the silent water. 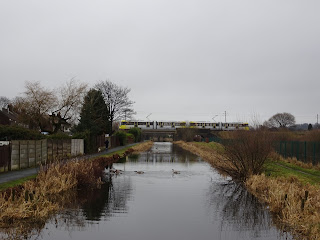 More cul-de-sacs, though these ones were far more modern, red-brick "executive" homes wedged tightly against each other.  At first glance, they looked like a nice place to live - everyone wants that canalside lifestyle, don't they? - but as I rounded the corner I saw they weren't as well-situated as they first appeared. 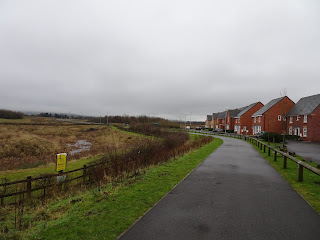 You could, at a pinch, find drainage ponds a charming local attraction.  At least you know they won't be built on, and they're bound to attract a lot of birds and wildlife.  But right next door is a giant grey wall of warehouses. 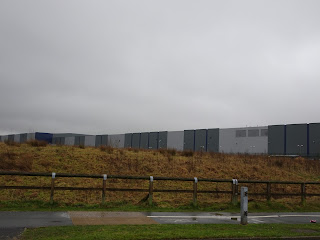 Distribution centres for Asda and JD Sports; cubes of storage that exist purely to be serviced, 24 hours a day, by a flotilla of trucks.  Your charming waterside home is basically a sound barrier between the Kingsway Business Park and the canal users.  Michael Faraday Avenue, the long sweep of tarmac I was stood on, had been laid out ready to accommodate more development at a later date.  I wasn't sure what would follow - more houses?  Or more trucks? 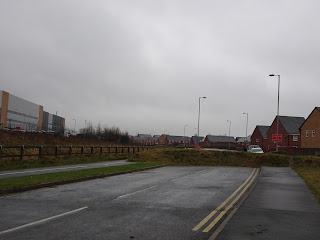 For the time being, it was relatively quiet.  I could see the Pennines across the way.  The earthworks across the road meant there was no traffic.  I followed the curve round, then cut down a path to reach the Kingsway Business Park tram stop.  It was splayed either side of the foot crossing, the designers taking advantage of all that spare land to space it out, and didn't look like it would ever need crowd control measures. 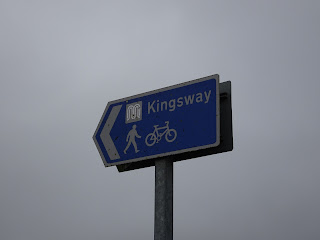 There was already a lad on the platform waiting for the tram, so I took up a spot a suitable distance away to take the selfie.  He watched me with clear bemusement.  Yup, just a tram stop collector, perfectly normal.  Nothing to see here. 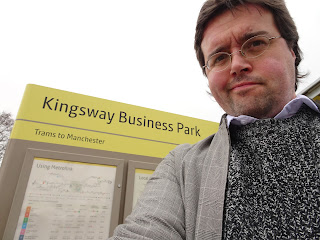 Those Rochdale steps gave me the willies too, in similar slippery conditions. I'd like to have seen the town centre before they knocked so much of it down, seemingly without much to replace it. But hell yes, the Town Hall, marvellous.