Do Your Palms Ever Itch?

Despite being forty years old and a massive nerd, I had never in my life been to a fan convention.  Not for James Bond, nor Doctor Who, not one of those weird "Autograph Festivals" featuring Caroline Munro, Madeline Smith and the boy from George & Mildred.  I've not even been to a Star Trek convention, and I own a hoodie which is specifically designed to look like the Next Generation command uniform.  (That emotion you're experiencing right now is jealousy).

So when my friend Jennie suggested we go to a Twin Peaks fan festival in London, I was a little trepidatious.  Twin Peaks is, of course, one of the finest television shows to ever grace the airwaves; three series and a film of comprehensive, insane headfucking, mixed with generous lashings of humour and sex.  I imagined it would be somewhat... unusual.  However, Jennie offered up the clinching factor: Sherilyn Fenn would be there.  Audrey Horne. 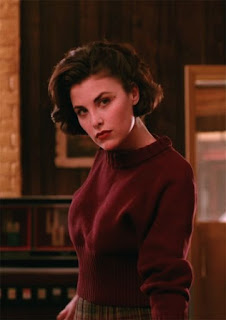 I loved Audrey.  I loved her fun, her cruelty, her intelligence.  She was astonishingly beautiful.  And while she was shortchanged by Twin Peaks: The Return, the opportunity to be in the same room as Ms Horne was too good to pass up.

It meant travelling to London, which meant using the Underground.  As I have posted many times on here before, the London Underground is my one true love.  I get a thrill just from using the escalators.  I find it all tremendously exciting.  Of course Jennie didn't find it quite so adrenaline inducing so on the Sunday morning, before the festival started, I got up early for a little bit of station collecting. 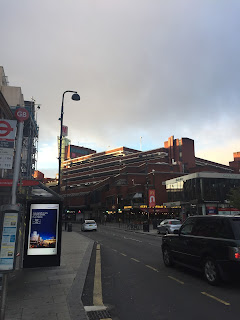 We were staying at the Travelodge on the Wood Green High Road, a resolutely unlovely strip of London commerce.  Sometime in the Seventies a great brick slab of a building, the "Shopping City", crashed into the centre of Wood Green and blocked out the light.  It dominated the street and the local district, sucking in all the chain stores and leaving the main road to be populated with pound shops and bargain stores.  It was a grim walk, the pavements still being scrubbed of the Saturday night's messes, and there was very little to rescue it.  Until the Underground came along. 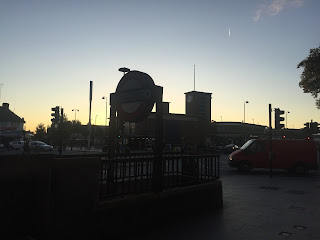 Just a glimpse of roundel can raise my spirits, but Turnpike Lane did more than that.  It was a singular ray of joy after the grime of the High Road. 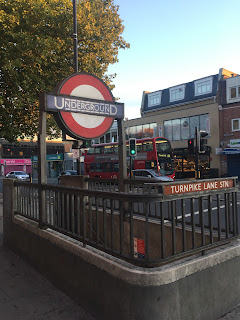 Turnpike Lane was opened in 1932 as part of the Piccadilly Line extension to Cockfosters.  It was designed by architectural genius Charles Holden and the care and attention to detail is obvious throughout.  Look at this subway entrance, for example: 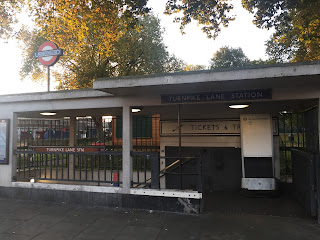 It leads you into a small area beneath the roadway with this circulation space at its centre.  It's charming and well lit, with the glowing column to draw your eye and move you on to the station. 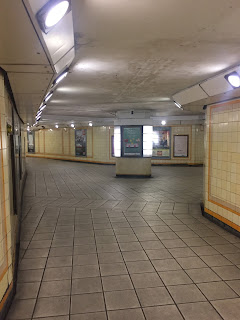 That takes you into the station proper.  Holden's signature design was the box - a high vaulted cube that housed the ticket office.  It made the station feel bright and airy, while also providing a landmark in the street to attract attention and passengers.  I'd been to another Holden Box station, Acton Town, and this was similar, but different enough to make it your station.  Churn out a series of identikit railway buildings and it becomes anonymous; the trick is put in enough slight modifications to make your station your station. 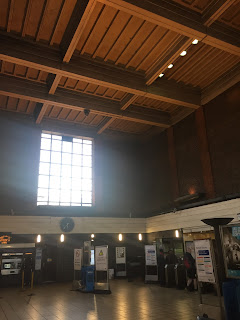 Light streamed in through the high windows, illuminating what could have been a dark space with a dramatic glow straight out of a Spielberg film.  It was joyous. 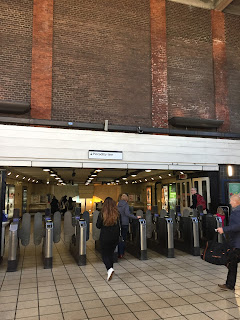 I wafted my Oyster card at the ticket barriers.  I love the smooth electric swipe, the swift check and the clatter of the gates, but there's a little piece of me that regrets the loss of the Tube's passimeters, mainly because passimeter is such a fantastic word.  On the escalator I found another delight: uplighters! 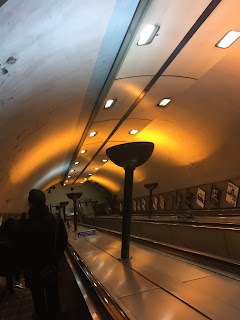 I'm not sure if they're original or modern facsimiles but either way, they're beautiful.   It's weird how uplighters are such a simple, effective way of lighting escalator banks, but no-one seems to do it any more, favouring harsher strip lights instead.  Merseyrail would look a lot sexier with lighting like this.  It'd also stop idiots from trying to slide all the way down, unless they fancied getting their groin bisected by a pole. 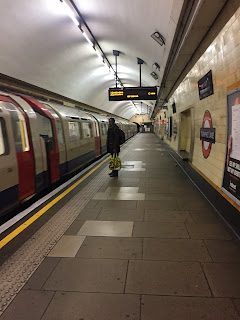 One quick whizz on the Piccadilly Line back the way I came, and I was at Wood Green.  If Turnpike Lane is a glittering tiara, Wood Green is costume jewellery.  It's fine, and it looks ok.  These ornate vents on the platform, for example, are a delight: 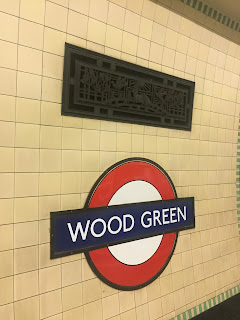 And a combination roundel/Way Out arrow is something that will always make me cheery: 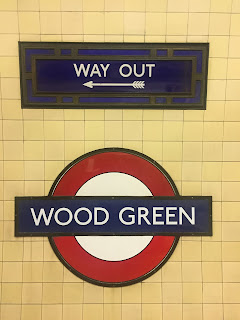 But the rest of it is just Holden standard.  Which is a very fine standard of course, one of the best, but still not exemplary.  When the bar is set so high, it becomes harder to clear it. 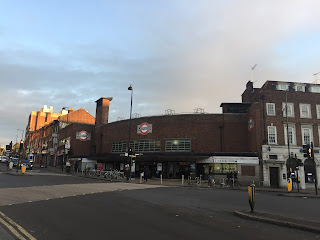 It does form a distinctive and attractive presence on the corner.  I headed back to the hotel, ready for a shower and the day ahead.  As I climbed the stairs I felt the rumble of an Underground train beneath my feet.  It'll never fail to thrill me. 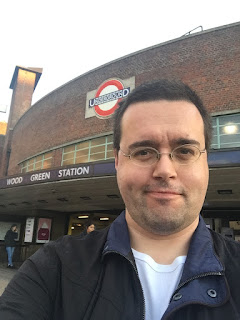 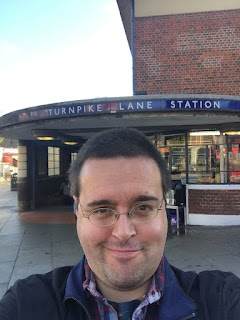 P.S. Yes, pedants, these photos were take on two separate occasions; I forgot to take a photo of Turnpike Lane because I was too busy swooning.  Hence my completely different outfit.

P.P.S.  The Twin Peaks Festival was good fun, though marred by the fact that I spent much of the day wracked with anxiety which made it hard for me to enjoy stuff quite so much.  I DID meet Sherilyn Fenn, though: 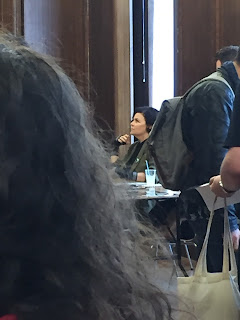 ...and I got her autograph: 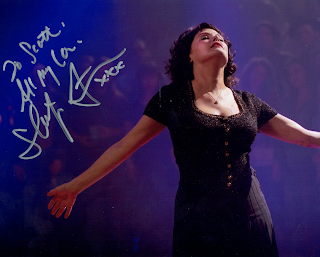 Unfortunately during the Q&A she was kind of bitchy and sullen, which was a disappointment.  The rest of the panel were a delight.  Never meet your heroes, folks.
Posted by Scott Willison at 13:50