June 17th, 2007, and I sat down in front of my computer and announced that I was going to visit every Merseyrail station.  Just the Northern and Wirral lines, mind; doing any more than that would've been daft.

Five years after that, I thought I'd give the Northern Rail map a go as well.

Five years after that and I've done so, so, much more.  All of Merseyrail.  All of Northern Rail.  A whole load of others as well - bits of England and Scotland and Wales that have delighted and excited me.  And now I'm asking: what's next?

There's a hole, you see.  A big gap where station collecting used to be.  It had, though I hadn't realised it, become an obsession, and when you lose the obsession, you don't know what to do with yourself.  This must be what it's like when a stalker finally kills the starlet.  You're stood over the half-naked corpse with the butcher's knife in your hand feeling discombobulated and lost.

I thought I might write a book.  I tried.  I traveled to a bunch of bits of Britain last year to collect lines that I thought would be interesting (it's why there was suddenly a big gap in the blog in 2016).  The Severn Beach Line, the Borders Railway, the tiny tube trains on the Isle of Wight - places like that.  But much as I enjoyed the travelling, the writing - not so much.  There's a big difference between writing a proper book with actual facts and context, and chucking out a blog post off the top of your head.  Writing is hard.  I mean, depressingly, awfully, gut-wrenchingly hard.  Sometimes I'd manage to finish something I quite liked, and that'd be great, but most of the time it was just relentless, awful, misery.  At the point where trying to write was actually making me cry I thought, nope, have to let this go.  It's just not going to happen.

And I'm aware that I've got rusty.  Towards the end of last year I noticed a clunkiness creeping into my blog posts - leaden phrases clanging down on the page, sucking the joy out of the rest of it.  It was probably the sadness of knowing that it was all coming to an end.  So I stepped away after Manchester Piccadilly and did nothing.

There's still that hole though.  That gap in my life that I want to fill, because I really do enjoy getting out and about and writing a load of nonsense about it.  So I thought I'd do something easy.  Just slide back into the habit, as it were. 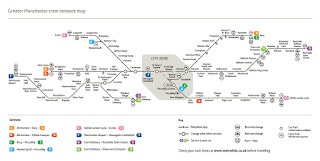 Everybody loves trams.  They're a wonderful way to get about, quiet and efficient and attractive.  And the north-west is lucky enough to have the best tram network in Britain: Manchester's Metrolink.  It has 93 stations, stretching from Altrincham to Ashton and from the Airport to Rochdale.  So that's the plan: visit every tram stop on the Metrolink, even the ones I've already been to.  May as well.  It's just sitting there doing nothing, after all.

It's big enough for me to get my teeth into, but it's small enough for me to use it as training wheels.  This is me trying to - oh lord - get back on track.  Ninety three little ticks to get me back in the habit.  In fact, I've already done my first batch.  And who knows what will follow then?  Maybe I'll do all the stations in Britain!  (No, I won't).
Posted by Scott Willison at 10:00

Email ThisBlogThis!Share to TwitterShare to FacebookShare to Pinterest
Labels: a new start, forward and back, Metrolink

How about a post on the Wirral Tramway? Or, what about visiting Japan? Would love to see your take on their fantastic network. Beautiful, punctual and clean.

Brilliant! Look forward to your posts. I really enjoyed your Victoria Line posts, maybe the Tube?

Agreed - writing a book is depressingly, awfully, gut-wrenchingly hard. And it's the "depressingly" bit which most people don't expect.

So hurrah for this new round of not-book writing! I'm greatly looking forward to it...

I've done a bit of the ol' "get off the tram, walk to the next stop" thing, and there's some very pleasant walks to be had. There's also some deceptively long walks between close together stations too cos the roads don't always match up to the rail lines of course (especially since a lot of them are converted heavy rail lines after all).

I've missed your writing over the last few months. Since All The Stations started up, it's been a good reminder how good your writing is. Welcome back!

Thanks folks. I hope I can meet your expectations!

And yeah Paul, I'll happily do Japan's railways. Just send me a ticket!