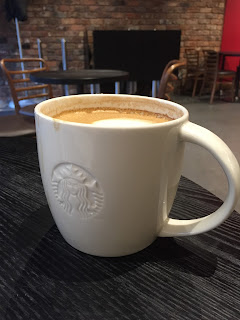 I’m writing this on my MacBook with a latte in Starbucks, because I am just that awful.  It’s not just any Starbucks though: it’s Chester Starbucks, a coffee shop that I used to be a frequent visitor to.  Every now and then, before work, I’d wander in and get myself a Caramel Macchiato and a cinnamon swirl to eat at my desk as a breakfast treat.  I was such a regular that the barista finally offered me a discount, because I worked in the city centre; unfortunately it was literally on my last day working in Chester, but the thought was much appreciated.

They’ve done it up a bit since I was last here.  The front is far more open, a plate glass window, and they’ve finally installed decent air conditioning.  And the toilets are actually quite decent, for once.  Why do Starbucks have the very worst lavatories in the world?  They aim for sophistication up front, all matey barista banter and limited blends, and then you go to the loo and it's worse than a toilet in a French service station.

Across from me is a man in a tartan tam o’shanter reading the Daily Record; I think he may be Scottish.  There’s also a pair of dreadful old bores who are referring to the Prime Minister as "Mrs May" in a way that makes me think they call women "pretty young ladies" and share risque jokes at the golf club about the barely out of her teens barmaid.

I’m in town for reasons far too dull to go into here.  I was on the first train out of Hooton, meaning to transfer to a different service at Chester to head into North Wales, but my schedule is light and I can get any train along the coast, so I decided to jump off the train at Bache.  We have history, me and Bache.  When I worked in Chester city centre, I used to get off the train there, then walk into town.  It was a pathetic attempt at getting some exercise into my life, an effort rather undercut by the fact that I then had the aforementioned Caramel Macchiato and cinnamon swirl when I hit town.  It was also the second station I ever visited for this blog, back in the far off days of 2007 when I was just visiting the Merseyrail stations on the Northern and Wirral lines.  Back before I became obsessed.  (If you click that link, incidentally, you'll see a picture of me when I was still in my skinny twenties, all chin and forehead). 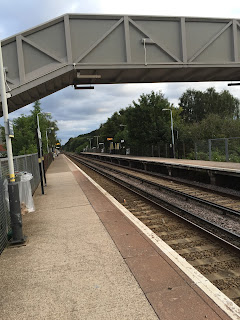 The only thing that's changed about Bache station is the giraffe ALF board I mentioned in my old blog has long gone.  The rest is the same, two platforms wedged round the back of Morrison's.  I crossed the tracks via the overbridge, which probably hasn't been painted since I was last here, and down into the car park.

Funny how quickly your brain slips back into the old routines.  Muscle memory guided me round to the pedestrian exit from the car park, across the road, and onto the Liverpool Road into the city centre.  Sometimes, if I was feeling a bit adventurous, I'd head down the suburban streets the other side of the railway line, crossing Brook Lane and coming out round the back of the Northgate Arena, but today I stuck to the favoured route. 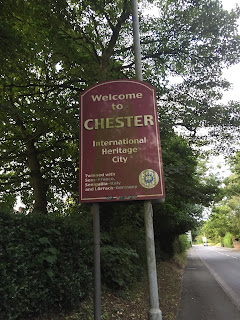 In the old days I'd have been here about ten past eight, breathing the fumes from nose to tail traffic, but today it was six thirty and quiet.  I crossed at Lumley Road - of course I thought of Joanna, instantly - and continued past big homes hidden behind trees.  Many of them had been repurposed now, acquired by the hospital or the university, name boards tucked at the end of the drive to let you know about their new purpose.  A bus trundled by, not even pausing for me, even though I was right by a stop, the driver keen to get into town for a break. 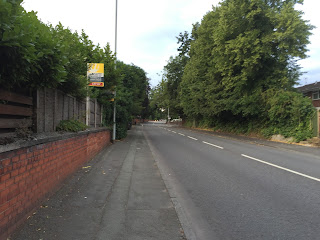 At the Queen's School, I crossed the road.  When I commuted, crossing was a struggle, the harassed drivers unwilling to pause to let a pedestrian break their grim faced morning routine.  Now I practically sauntered across, past the glass fronted Total Fitness that occasionally gave me a tantalising glimpse of some speedo clad hunk (but more often than not gave me a view of a large lady in a psychedelic one piece), and past the site of Liverpool Road station. 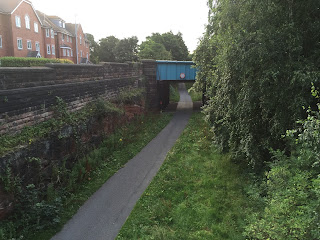 There used to be a railway line passing across the top of Chester, from the Northgate station - now the leisure centre I mentioned earlier - through Liverpool Road and Blacon and then joining up with what is now the Borderlands Line above Hawarden Bridge.  The railway line lasted a surprisingly long time; passenger services were axed by Beeching in the sixties, but freight trains continued until 1992. 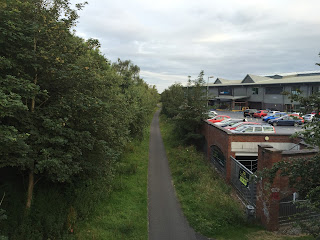 It's hard to conceive of trains passing through today, now that it's been surrounded by trees and aspirational apartment blocks.  Every now and then I think about walking the route, just to trace it again, skirting the edge of the city centre and ending up at Mickle Trafford. 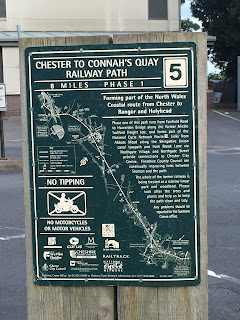 Half the sponsors on that board don't even exist any more.

Further on, the University buildings really start to build up.  It was originally a teacher training college, established by the Church of England, but it became a University in 2000 and has swelled rapidly.  Perhaps it's the glamour of Hollyoaks tempting young people to head to an educational establishment with the potential for plenty of casual sex and the odd murder.  There was a cut through at the bottom of Liverpool Road, an old road too narrow for cars that dropped down to Parkgate Road, but a few years ago a wall collapsed onto the pathway.  As with almost everything else in Chester, the walls were found to be incredibly old and incredibly fragile, so rather than risk them toppling on an innocent student they closed off the pathway completely. 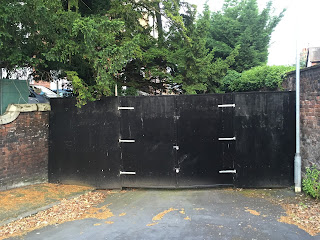 Passing the not-at-all-amusingly-named Gaymoore Close I was surprised to see the garage nearby had closed.  Even more surprisingly, now the trappings of the service station had been stripped away, it turns out there was a fine Victorian villa hiding underneath.  There's another wonderful villa on the other side of the road, with a stained glass orangery at the side; I was upset to see that it was undergoing work, and the glass roof was open to the elements.  I hope there is a Heritage Officer from the Council making sure that it's restored exactly as it was. 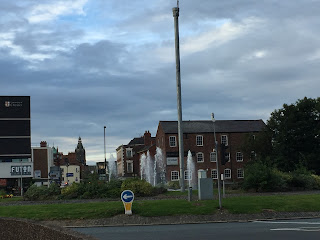 I was pleased to see the fountains at the Fountains Roundabout were actually turned on for once, as I descended into the underpasses beneath.  Underpasses are never nice.  There isn't a single one on this planet that doesn't carry a vague sniff of urine.  The ones beneath the ring road in Chester were built with ambition, to try and stop them from turning into the usual rape alleys.  The one at the bottom of Brook Street leads into a submerged garden beneath the roundabout, while the Fountains underpass sends you through a central circulation area. 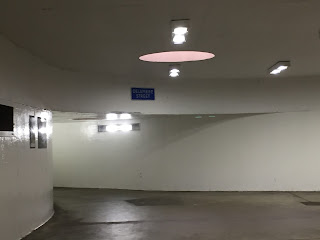 There's something bleakly futuristic about it, a bit Clockwork Orange, a bit THX-1138. The roar of the fountains fills the space.  In the ceiling, plexiglass domes are set into the ceiling, meant to let in light but now covered with dirt and mould to turn the sunlight brown. 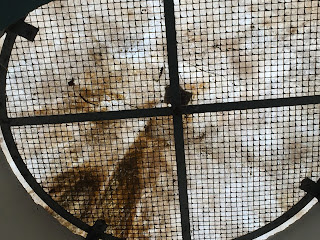 The top of Northgate Street has changed beyond recognition since I was last along here.  There's a huge student residence on the ring road - built as a Travelodge, but closed barely a year later - and opposite the old bus station has disappeared beneath a hefty office block.  Sadly, the Bull & Stirrup - a regular haunt for me and the BF; the very first time I ever visited Chester we met up there - was closed up, its windows covered by metal grilles. 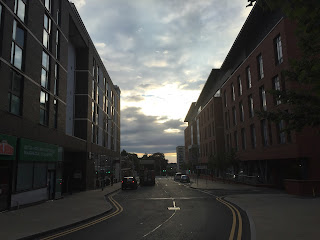 Across the canal and under the Northgate, one of the city's ancient entrance points and part of the Roman Walls.  Chester is the only city in Britain to still have its entire run of walls still in one piece, thanks to an eternal fear of rampaging Welshmen wandering across the border to pillage.  Behind the gate is Chester's oldest gay bar, the LA (I still call it the Liverpool Arms, because I'm ancient).  I'm not sure what the status of the city's other gay bar is, the subtly named Bar Six T Nine.  Gay bars are falling away now; Grindr and Gaydar and other, more niche, internet sites have taken away the traditional way of meeting other homos (standing by the bar until you're so drunk you just go home with the first person who says hello). 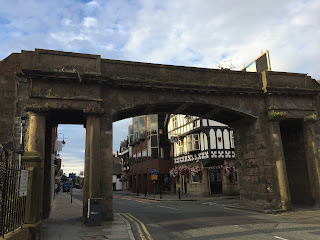 I wandered down Northgate Street, noticing the new shops, the new restaurants, which ones had updated their signs, which ones looked exactly the same as they always did (the Cheese Shop).  My job at Chester City Council had meant dealing with a lot of these businesses, and over the years, I grew to know them by heart.  I could practically list from memory the shops on the streets within the walls, one after the other.  When I left I stayed away from the city for a long time, just so that I could lose those memories.  I needed to come back to Chester with a blank slate. 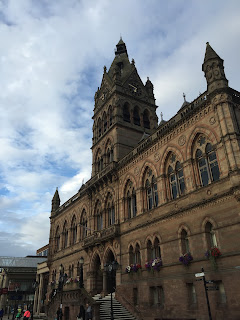 Town Hall Square still looked the same, dominated by William Lynn's town hall, its three faced clock  tower still refusing to give Wales the time of day.  (By the way, no, you can't shoot a Welshman within the walls after sunset - that's murder, and no ancient law can get you out on a technicality).  I looked up when I left my job here, and I was shocked to realise it was eight years ago: I shared my leaving do with a girl who was going on her maternity leave.  That child will be old enough to join the Cubs now.  It's still all there, tucked in my mind, though.  It's nearly eight thirty as I type this.  In the old days this would be when I arrived at my office in the Forum, finding a space amidst the mess of papers, settling in for a day's work.  Instead I'm going to head to the seaside.  Much better, I think. 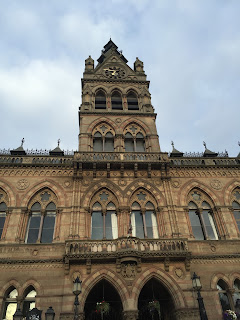 Amazing! That's my walk to work every morning!! (I used to work in Ellesmere Port, but since last October, Chester, to me this is like dying and going to heaven, Ellesmere Port is that bad), so I guess looking at it through someone else's eyes is different.
I call at the Cheese shop on my way home (sometimes), The Bull and Stirrup is going to be a Wetherspoons (though its taking a long time), The Joseph Benjamin cafe (directly opposite the LA) does a great Latte, and your right, The only interesting thing about the Bache Station was the Zoo iconography on the sign, though it's handy for Morrisons.
Keep up the good work Scott :)