A last couple of bits from my Barcelona holiday.

The principal railway station in Barcelona is Sants.  It's a rectangular concrete block, built in the 1970s, and is utterly unmemorable.  There's also Barcelona Sagrera station, under construction on the High Speed Line, which will be a kind of Catalan version of London's Stratford: a big modern building to stop people from going into town.

But the best railway station in Barcelona is Estació de França, so of course I had to go and have a look. 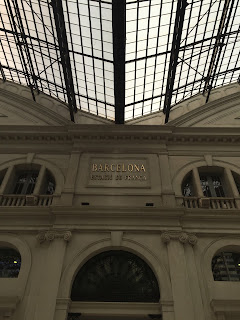 It's an ornate palace of a station, sited close to the Barceloneta district and away from the city centre.  It doesn't even have its own metro station. That remoteness is why Sants has taken over as the important station, but it also means that França hasn't been ruined. 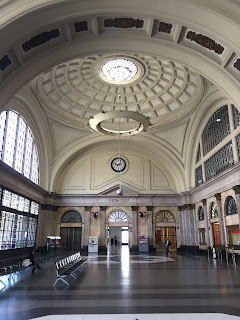 The main hall is cool and beautiful.  Elegant glass and plasterwork and plenty of wood and marble.  Exactly my kind of station. 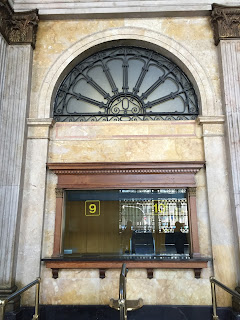 The station's restaurant is still open at one end, though it's not the fine dining experience it once was - it's far more caff than Cafe de Paris.  There's no call for it.  França's long distance services all pass through Sants first, so they're rarely full by the time they get here, leaving just a few commuter lines.  When I visited, the station was silent and echoing. 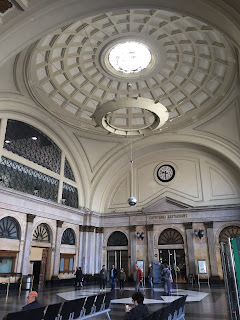 That clock didn't work though, which is always annoying.

Beyond is the train shed, two epic ironwork roofs curving into the distance.  Trains sat silent at the platforms, waiting to be called into use.  There were no passengers.

It was beautiful.  I sat on a bench and just stared at it for a while, grinning maniacally.  Just wonderful. 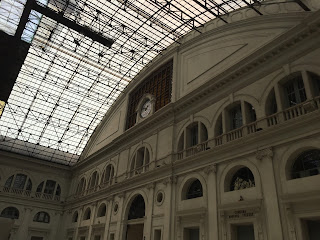 In the centre of the concourse was a tiny model of the actual station for you to pore over.  I wanted to tuck it under my arm and run.  In the model of the station, there was a model of the model, raising the prospect of a million tinier models going on until infinity. 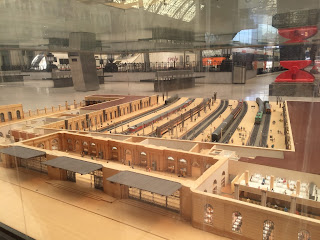 There will probably come a time when this station will be closed altogether.  It'll be surplus to requirements.  It's already partly used as office space for one of the universities.  I hope not.  I hope it carries on being this beautiful relic. 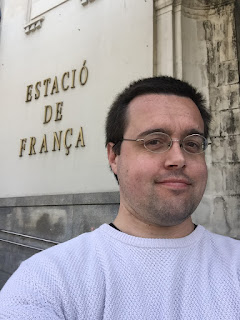 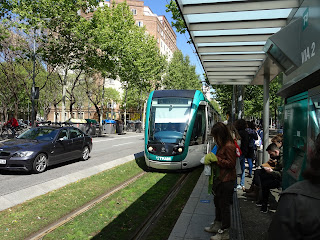 In the UK, we're so desperate for any transport infrastructure at all, we treat trams as the holy grail.  Manchester loves them; so does Nottingham, and Birmingham's desperately hoping people will start liking them now they go somewhere useful.  Cities go scrabbling to the Government for a few quid so they can build the odd line here and there.

Barcelona has a metro.  A good, proper metro system, the kind British cities should have, but for some reason we think only London and Newcastle deserve to have.  For the Spanish, trams are the things you build out of the city centre - the transport to get people to a proper railway station.  They're alright, but Barcelona's got a proper network to play with: it doesn't need to fuss around with trams. 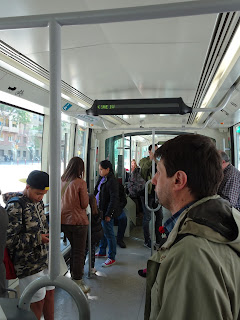 I'd not meant to go on the trams, but a wander along the beach had made me lose my bearings, and I ended up at a tram stop instead of a metro station (because they still have metro stations out here, because they're an incredibly civilised city).  Obviously I stood on the hinge, the best spot on the tram: 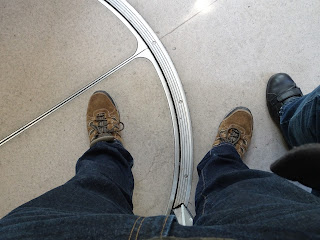 (That's the BF's foot on the right, by the way.  I'm pretty sure that's the first time he's actually appeared in a picture on this blog).

I'd love it if these new devolved City Regions meant a load of fantastic transport projects all of a sudden.  That Liverpool suddenly built a tram along Queens Drive, or Manchester put an underground line beneath Oxford Road.  It won't happen.  Liverpool's mayor getting rid of bus lanes seems to be the limit of ambitious transport ideas.  Instead I'll have to keep heading over to Europe to see how it really should be done. 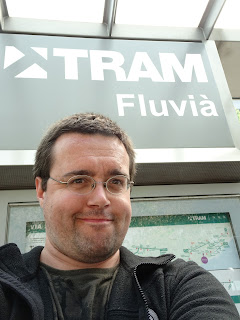 I like trams but if there is one thing Manchester needs, it's for the Metrolink to dash into tunnels in the city centre. Seattle has a transit tunnel for buses and light rail. It works

But yeah, costs money so will never happen.

I like trams but if there is one thing Manchester needs, it's for the Metrolink to dash into tunnels in the city centre. Seattle has a transit tunnel for buses and light rail. It works

But yeah, costs money so will never happen.

Love photo #2: I think it has a feel of old prints of the booking hall at the former Euston.

I like stations that are less important than they used to be - as long as, like this, they are well-maintained.

As for tram tunnels, Den Haag did a good job of that.

The time for a tram tunnel through Manchester has sadly been lost now. There'll be 3rd and 4th and 5th city crossings snarling up the centre before anyone even slightly suggests a tunnel. The only way I could see it happening now would be on an entirely new alignment, but then that wouldn't call at Victoria or Piccadilly, so there would be a load of connectivity lost.

P.S. The more you tell me to go to Yarm the more determined I am to not go to Yarm.

Hi Scott: we've never met but I'm worried about the six week gap!! Are you OK? Was it the upset over the additional stations? Best wishes. Ben

I was wondering the same thing! Hope you're okay!!


As a matter of fact I'm dead. I'm writing this from BEYOND THE GRAVE.

No, I've actually had a ridiculously packed couple of months which have meant I've not been able to do any blog related travelling. On top of that, there have been constant whispers that Kirkstall Forge was on the verge of opening, so I didn't fancy schlepping over to Leeds to collect the last few West Yorkshire stations until it was accessible. It opens tomorrow, so I should be out there soon... once I've got a whole load of other stuff out of the way.

Also people keep telling me to go to Yarm and as my mother will tell you, if you tell me to to do something I will go out of my way not to do it. That's how I ended up sat at the table refusing to eat my dinner for several hours as a child. I'm a bloody minded twat, and so right now, I'd rather have my face blown off in a zeppelin explosion than go to Yarm.

But thank you for your concern chaps. It's lovely to know you care. I'll be back on the trains soon enough!