A Change of Plans 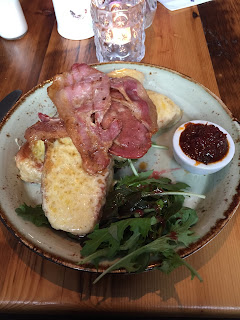 I stared at the heap of eggy bread, cheese and bacon in front of me, my mouth still wet with tea, and thought, "thank goodness I changed my plans."

I wasn't meant to be in the delightful Kitchen tea rooms in Snaith.  I'd made meticulous plans before I'd left Merseyside, and according to them, I should have been experiencing the delights of Goole.  The problem was, I'd come to the conclusion that there were no delights in Goole, and so at the last minute I'd changed my mind.

The line between Pontefract and Goole gets a terrible service.  One train from Goole to Leeds in the morning.  One in the evening.  And one train in the opposite direction in the evening.  (It goes without saying that there is no Sunday service).  It essentially means that if you get the 07:04 from Goole, you've got about eleven hours until you can get a train home again.

I figured the best way to get round this would be to get the early train to Rawcliffe, walk back into town where I could get something to eat and maybe a bit of culture, and then walk out to Snaith in the afternoon to get the train back. 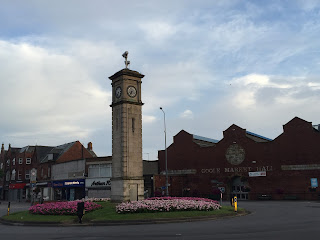 Goole was, however, a place that didn't reward loitering.  I'd arrived the previous night and found less a town, more a husk.  There are some places that have been kicked in the nuts, and when you visit you can feel it trying to get its breath back.  Goole, on the other hand, had been kicked in the nuts, thrown in a skip, then gone home to find that its wife had run off with its brother.  And its dog was dead. 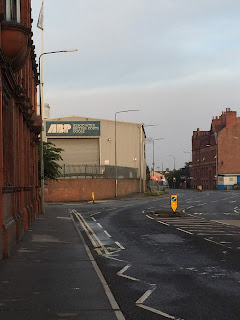 It was a town filled with utter sadness.  It was one of the country's premier inland ports, built to process coal from Yorkshire's mines, but now it doesn't seem to have much of a purpose at all.  There are still docks, but they can't handle the giant vessels the coastal ports manage, and there aren't any coal mines any more.  Instead there are heavy metal fences and wide parking areas for trucks that don't seem to want to arrive. 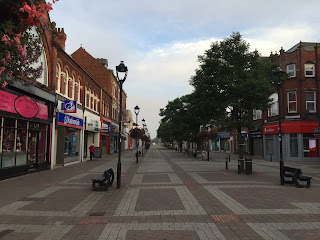 The main shopping street, meanwhile, is a parade of banks, cash for gold places and charity shops.  One empty shop, It's Incredible!, flouted copyright law by having the logo from the Pixar film on its shop front.  Meanwhile, the elegant script of the Victorian Times Printing Company was overshadowed by the Cancer Research shop that now occupied its premises.  There's a retail park off to the side, along with a huge Asda, but the anchor store there is a Boyes; this isn't a mecca for shoppers.  At 6:30 in the morning it was bare and soulless. 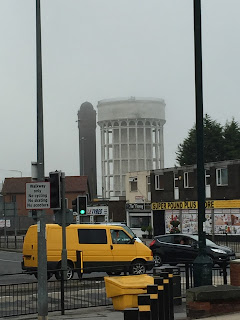 Outside the station I saw the town's favourite landmarks, two water towers nicknamed the "salt and pepper pots"; the view was slightly ruined by the Super Pound Plus Store in the foreground. 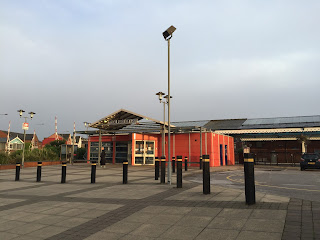 Goole station's had a bit of money spent on it, with a new ticket office and plenty of paving outside to form a "gateway".  At that time of the morning it was still closed.  I saw the station master arrive, and let himself in, but he absolutely refused to open the waiting room until seven o'clock. 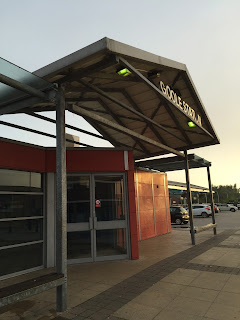 The new building has been grafted, inelegantly, onto the Victorian ironwork over the platforms.  Step behind its bright orange fascias and you get intricate metal roofs and a working station clock. 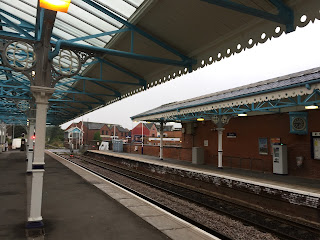 I took a seat on the dew-covered bench and decided: I didn't want to come back here.  I'd not seen anything in the town that captured my imagination or my attention.  I'd just end up sitting in my hotel room, watching daytime telly and counting down until it was time for me to walk back.  I decided that instead, I'd walk along the river from Rawcliffe to Snaith, and hope that it was an improvement. 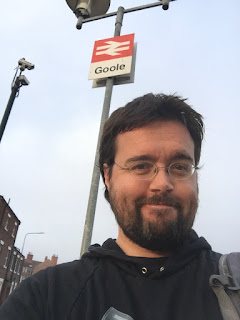 By the time the train reached Rawcliffe, a mist had descended.  I could see only a hundred yards or so across the fields from the train; the rest was blanketed in a thick white veil.  Now and then there'd be a hint of a pylon, or the ghostly arms of a tree, but mostly it was obscured. 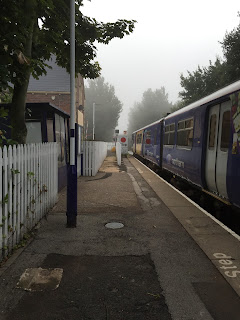 I stepped off into this ethereal world, my mood already improved.  A nice heavy load of mist might have improved my opinion of Goole, too.  There was a station building, now a home, but no sign; I'm guessing that the service levels are so embarrassing they don't want to get people's hopes up by advertising a railway station.  I settled for one of the platform signs. 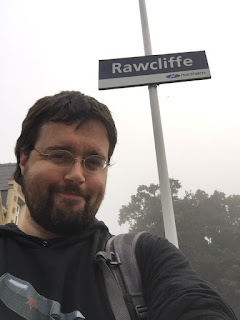 After a quick check of Google Maps, I trekked away from the station and on towards the village.  The only flaw in my new scheme was I hadn't eaten at all that morning.  My hotel room included breakfast, but that started serving at seven so it was no use to me.  It hadn't been a problem when I'd planned on being back within a couple of hours, but now I had a five mile trek  on an empty stomach.  I hoped I wouldn't pass out and fall in the river. 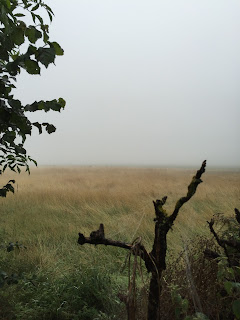 Station Road was a straight line between fields.  Occasionally big ugly houses would swim out of the mist, over extended and too tall, with pretentious names and automatic gates to stop people from stealing their 4x4s.  There was a school for autistic children then, on a bend, a care home seemingly built out of prefabricated blocks.  It was getting simultaneous visits from a dust cart and a food delivery service. 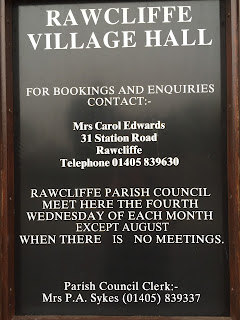 The odd spacing around the "is" in that final line is an entire story in itself.  I can imagine hours of heated debate over the correct grammar for the sign:

"Well, August is singular, so it should say 'there is no meetings'."

"But meetings is plural, so it should say 'there are no meetings'."

And then they debated some more, possibly wheeling out copies of the OED.  Someone ordered the sign, with "are no meetings" on the bottom, and then the bewhiskered Colonel stamped his foot and shouted "It should say 'IS', and I refuse to move from this parish meeting until it's changed!", and so they changed it, even though everyone was pretty sure it was wrong.

(Still, it's better than an office block I spotted in Goole which went under the name of Pheonix Chambers). 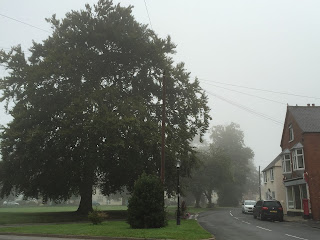 The village green was a wide triangle of grass, only slightly spoiled by Do Not Park On The Green notices every ten yards (I blame that Colonel).  The post office was closed, and was in the process of being refitted; inside there was no plaster on the walls and bare floorboards, but a Post Office Savings Bank sign still clung on above the door.

There was an informative board outside the parish church, telling me that Rawcliffe was nicknamed the "Queen of Villages" in the 19th Century because of its low unemployment and high living standards.  There was information about its history, including an entry from the school's log book from January 1878:


A boy called Frank Earl was punished for using bad language to a Miss Hepworth as she walked home the previous evening.  Frank's mother came at noon in a very excited state, and as she would not see reason, was left to talk to the walls.

That's surprisingly sassy for a Victorian log book.  For some reason I'm seeing it being written by a trim school master who never married but did share his cottage with a very nice gentleman who did flower arranging. 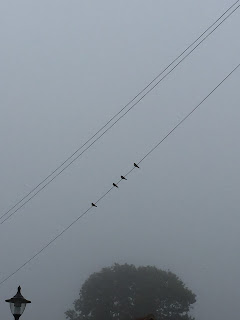 I'd hoped there might be a little cafe where I could get some breakfast, but even the Costcutter didn't open until 8:30, so instead I headed down a side street to the river.  Ahead of me an old farmer type, grey whiskered and wearing wellies, walked behind an excitable collie.  There was a sturdy red brick wall with steps in it, and I climbed up to find myself on a ridge above the water. 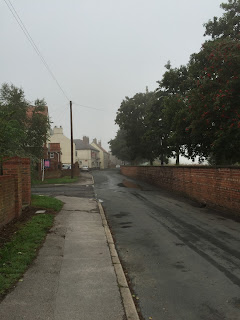 The flat land in this part of the country means it's susceptible to flooding, and so to try and avoid this, a high ridge has been built along the length of the Aire.  It shadows every turn and twist, giving you a bird's eye view down to the water, but taking away some of the joy of a riverside stroll.  I felt separate from the landscape. 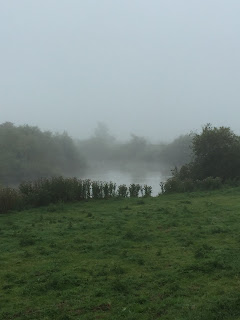 The ever present mist didn't help.  Yellow fields turned sepia under it, and I couldn't admire the scenery.  Instead I trudged, the path opening itself to me in stages and reminding me of that "fog of war" you get in strategy games to encourage exploration. 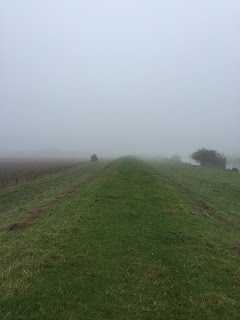 I'd been avoiding cow pats all morning, and I finally found the herd responsible.  They took time out from their busy cud chewing to stare at me, slightly bewildered.  Apart from one who decided to pose with some flowers; I think she saw my cameraphone and decided she was going to be a star. 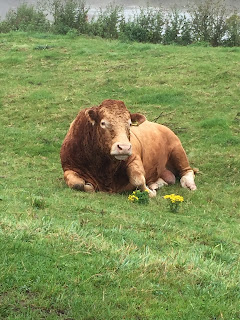 Finally I stepped off the river bank and past a row of cottages.  An elderly woman was sweeping her front step, as she had no doubt done for sixty years or more.  Beyond was the bridge over the river that had been key to Snaith's prosperity for years.  There was a toll bridge here for centuries, holding up traffic, until finally in the 1920s the council intervened and built a free one. 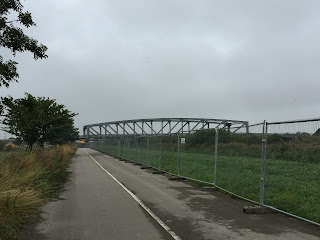 I turned south, avoiding the heavy plant machinery that was repairing the flood defences, and headed into Snaith itself.  The mist lifted as I got away from the fields, and I found a pretty, vibrant village. 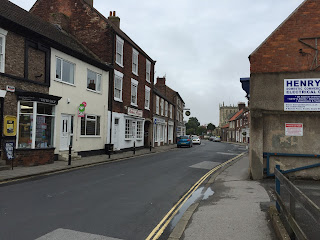 The High Street still had local businesses on it, plus there was a library and a fire station.  Tucked alongside the church were the lock ups, 18th century cells that were used to give drunks somewhere to sober up. 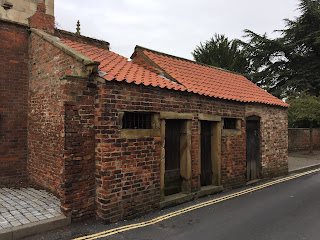 The High Street looped back onto the Pontefract Road, where yellow Council signs advised traffic to find an alternative route while work was carried out on a nearby bridge.  Temporary lights had been erected to try and control the vehicles as they passed through the Market Place.  Most pleasing of all were the signs erected in the window and car park of J Punton & Sons, a combination funeral director/DIY store.  Because who doesn't want to arrange the send off for a loved one and buy rawlplugs without having to park twice? 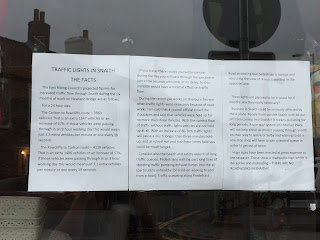 I would strongly encourage you to read all three pages of carefully thought out maths about why the Council have introduced traffic lights to the village as a means of JUST BEING REALLY ANNOYING.  It's brilliant.  I love a good nutcase. 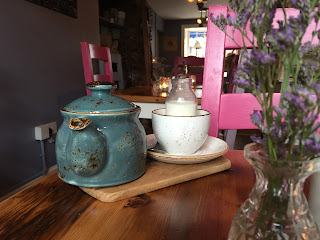 Chuckling to myself, I headed to Kitchen so I could finally get the cup of tea I craved.  It was just gone eleven, and I still had another seven hours until my train back to Goole.  I loaded up Wikipedia's page on Snaith to see if I could find something interesting to occupy my time.