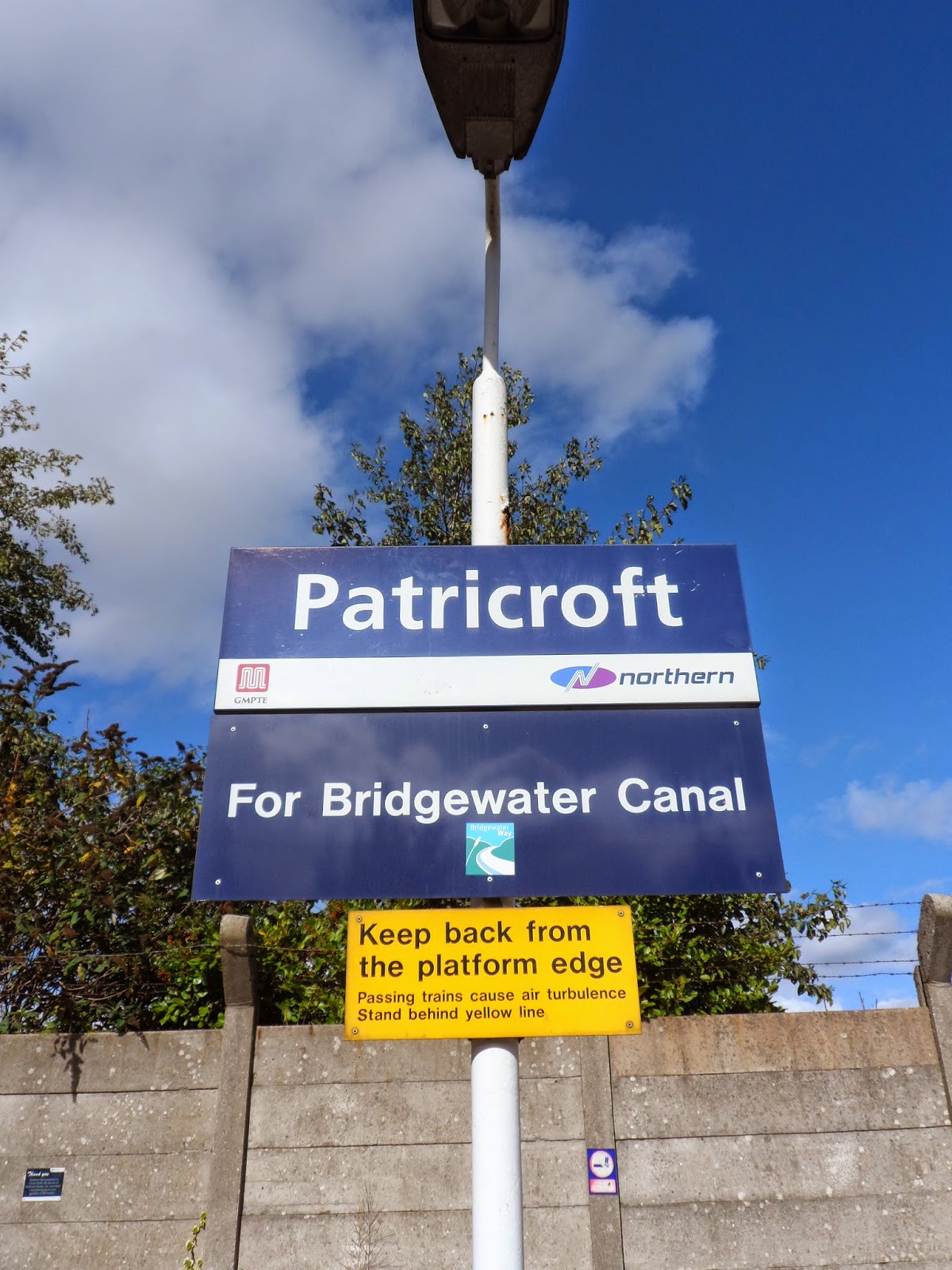 Patricroft sounds like a posh ingredient for a hand soap.  "Made from the finest ingredients - lavender, ylang-ylang and patricroft."  Something from Crabtree & Evelyn - none of your tat.  It promises luxury and decadence. 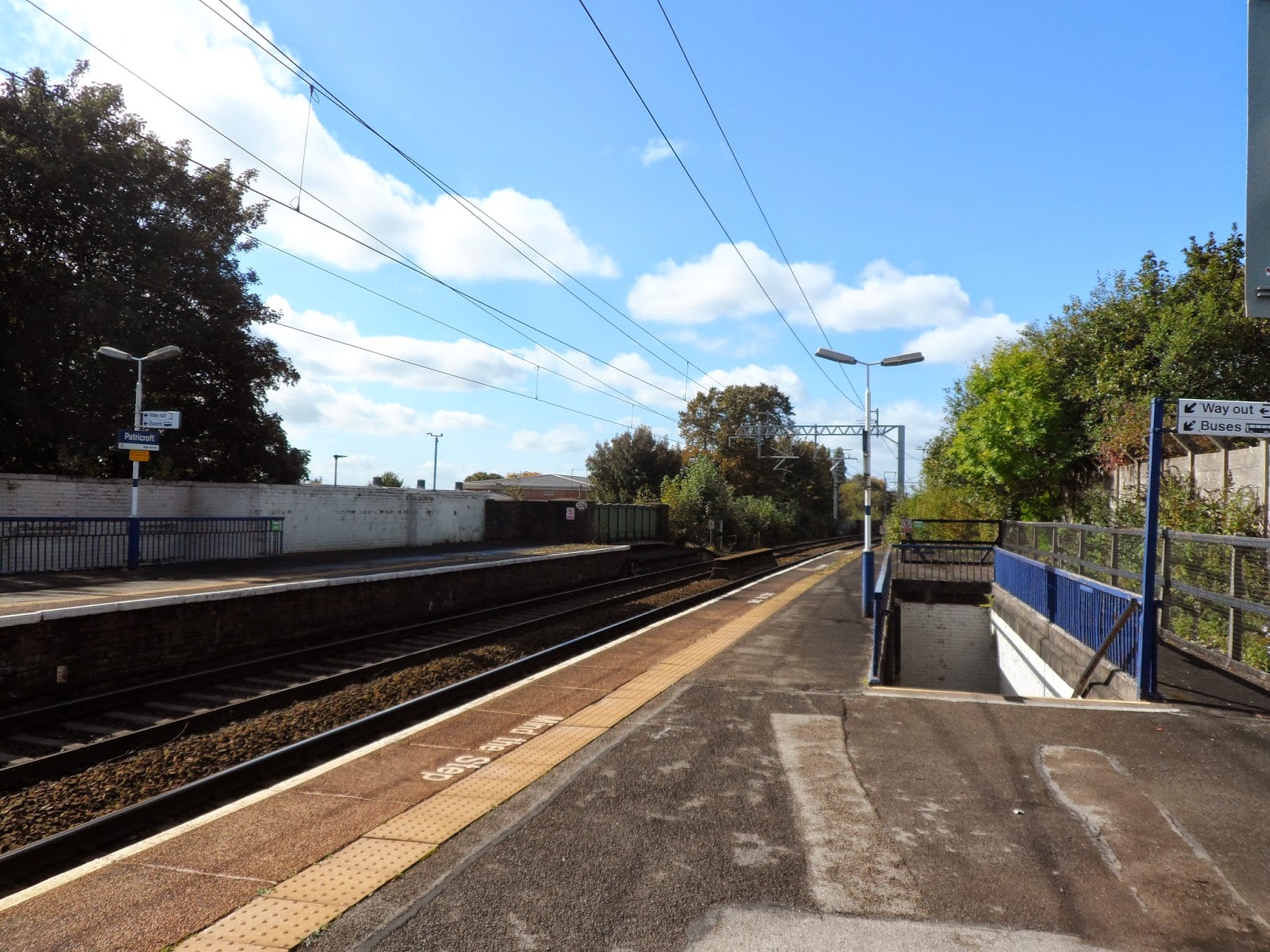 If Patricroft was actually a hand soap, it would be more like Asda Smart Price Hand Scrub, the stuff that's basically washing-up liquid in a different bottle.  It's empty and unloved.  Peeling white painted walls line silent platforms.  Brick shelters, illuminated by strip lights, may as well be renamed "murder kiosks". 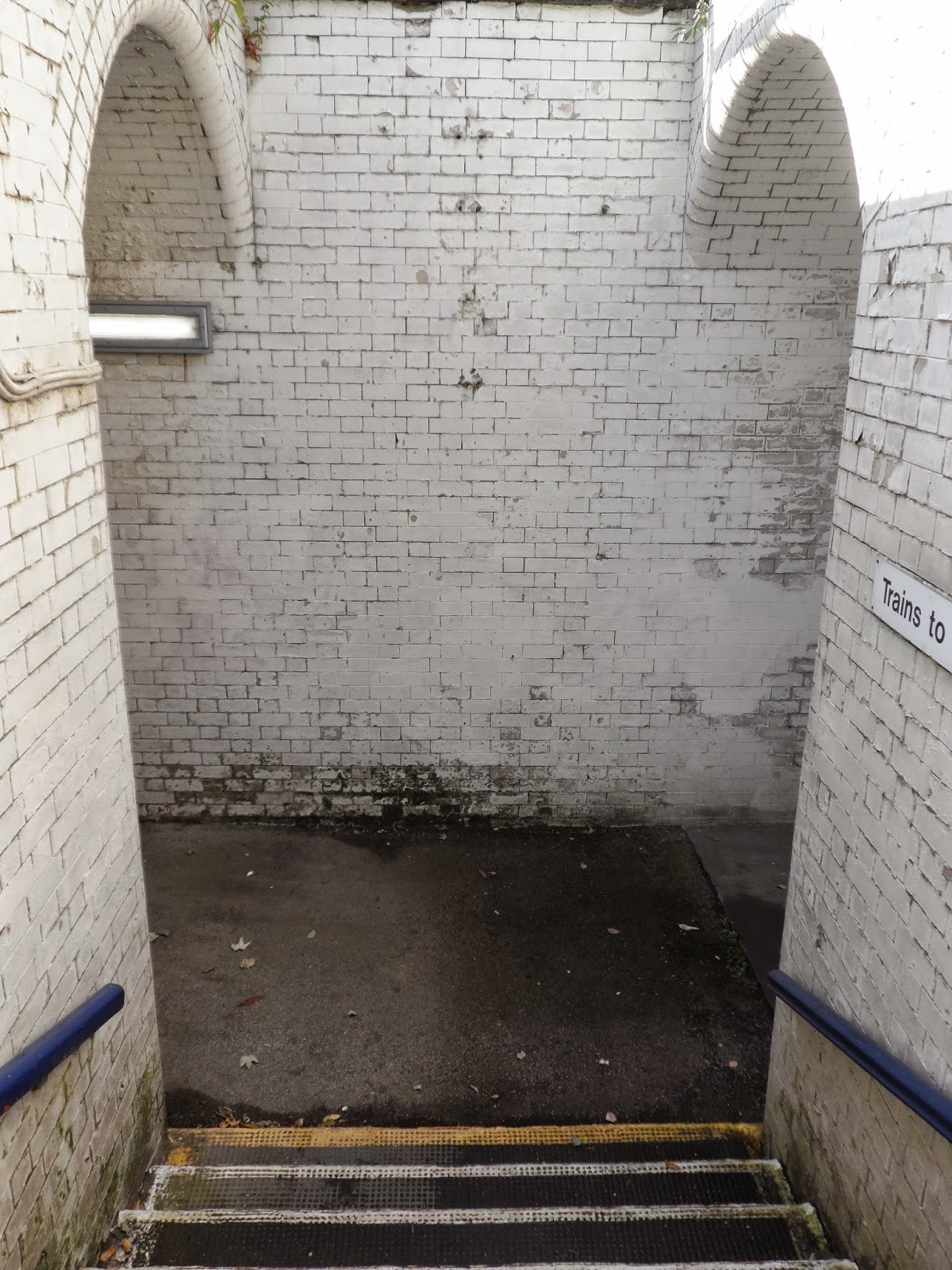 To be fair, Patricroft has a great deal of history in its favour.  The station is on the Liverpool to Manchester Railway, the first intercity service in the world, and it's at the point where the line crosses the Bridgewater Canal, the first canal in England; it's a confluence of major transport firsts.  It's a shame that there's not much there to show for it. 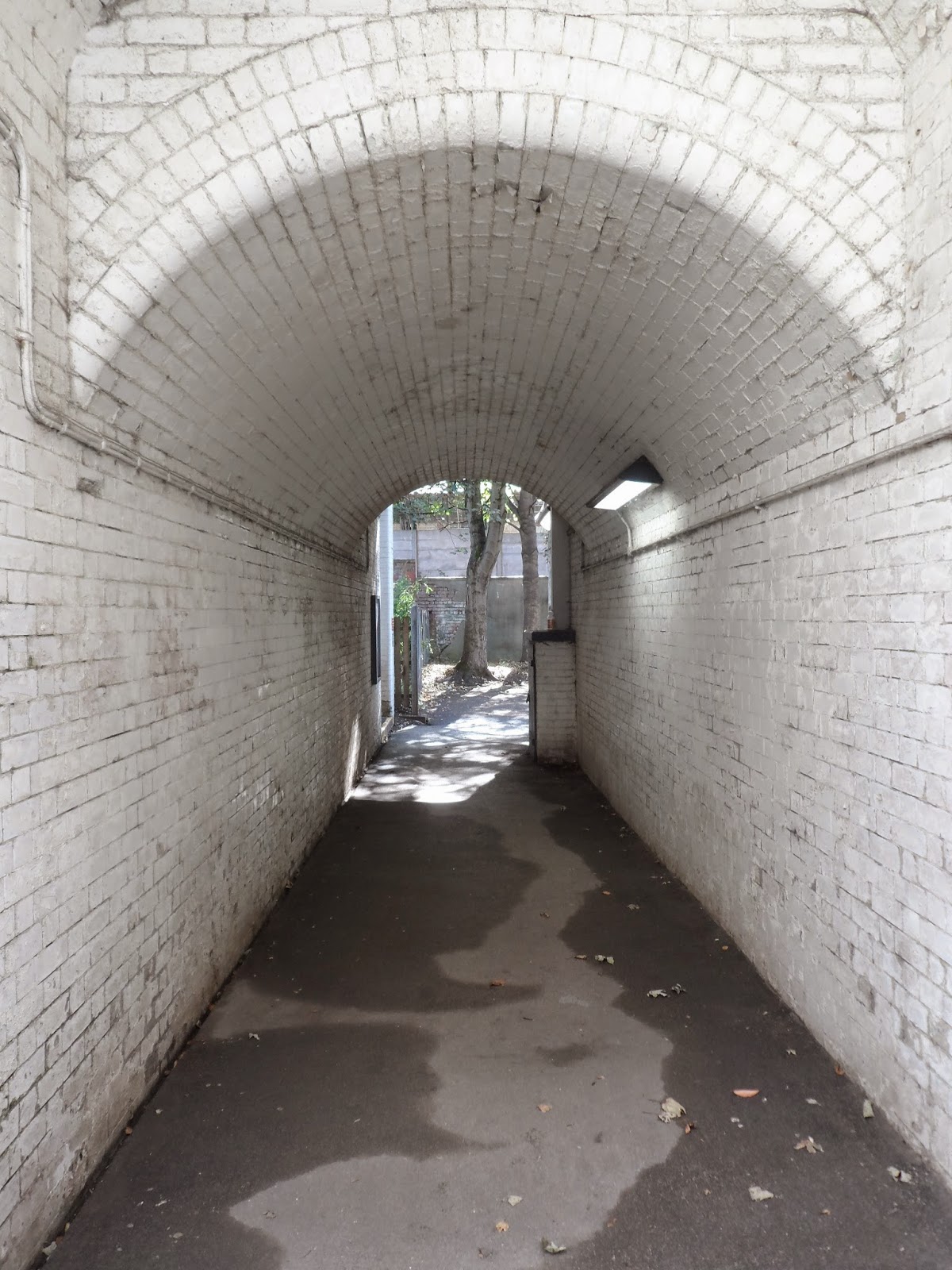 There used to be a station building here, but it was demolished in the Eighties, along with the power depot to the rear.  What's left is a small pavement area which, at a push, you could call a plaza.  I trotted out into the paved area, ready with my camera to take my sign pic, only to stop and have the same reaction as my spiritual twin, Liz Lemon:

There were three boys loitering beneath the station sign.  Aged somewhere between 14 and 19, they wore tracksuits and baseball caps and gold chains.  One had a skateboard that he idly kicked back and forth, while another was sitting on the little wall around the flower bed and smoking.  I felt a ripple of fear, the unavoidable consequence of being both old enough to be their dad and a massive nerd, and decided I couldn't possibly arse around trying to take a selfie with their young, judgemental eyes watching me.  They were bound to laugh.  And point.  And possibly use slang terms that I didn't understand. 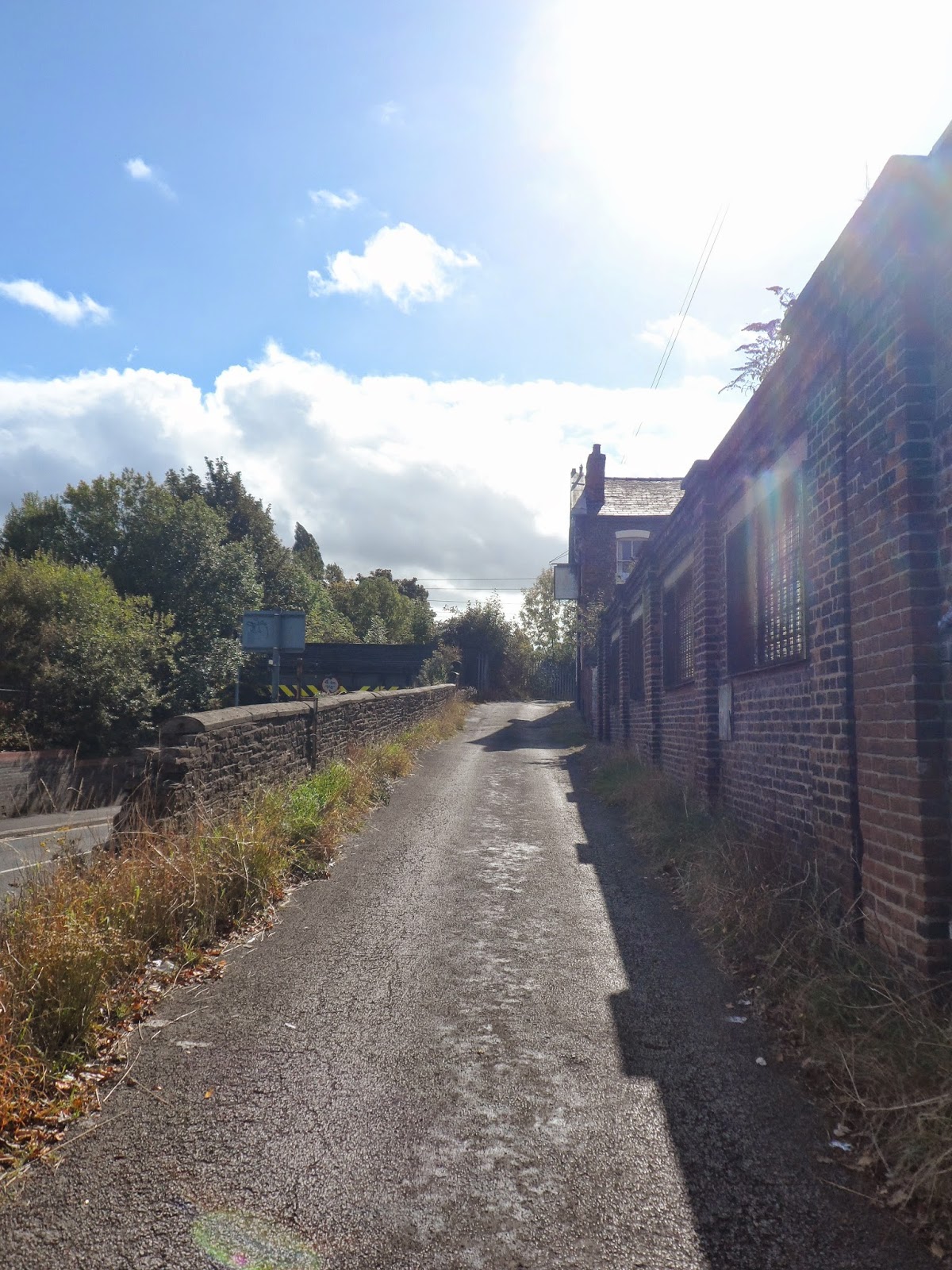 I went somewhere I thought they couldn't follow, not unless they had some kind of fake ID: the pub.  Opposite the entrance to the Nasmyth Business Park, just beneath a banner advertising "Krav Maga: The Israeli Martial Art", was a side road leading up to the Queen's Arms.  This is no ordinary pub.  The Queen's Arms opened in 1828 as the Patricroft Tavern in the hope that they could profit from the new trains.  As such, it's got a fair claim to being the world's first railway tavern. 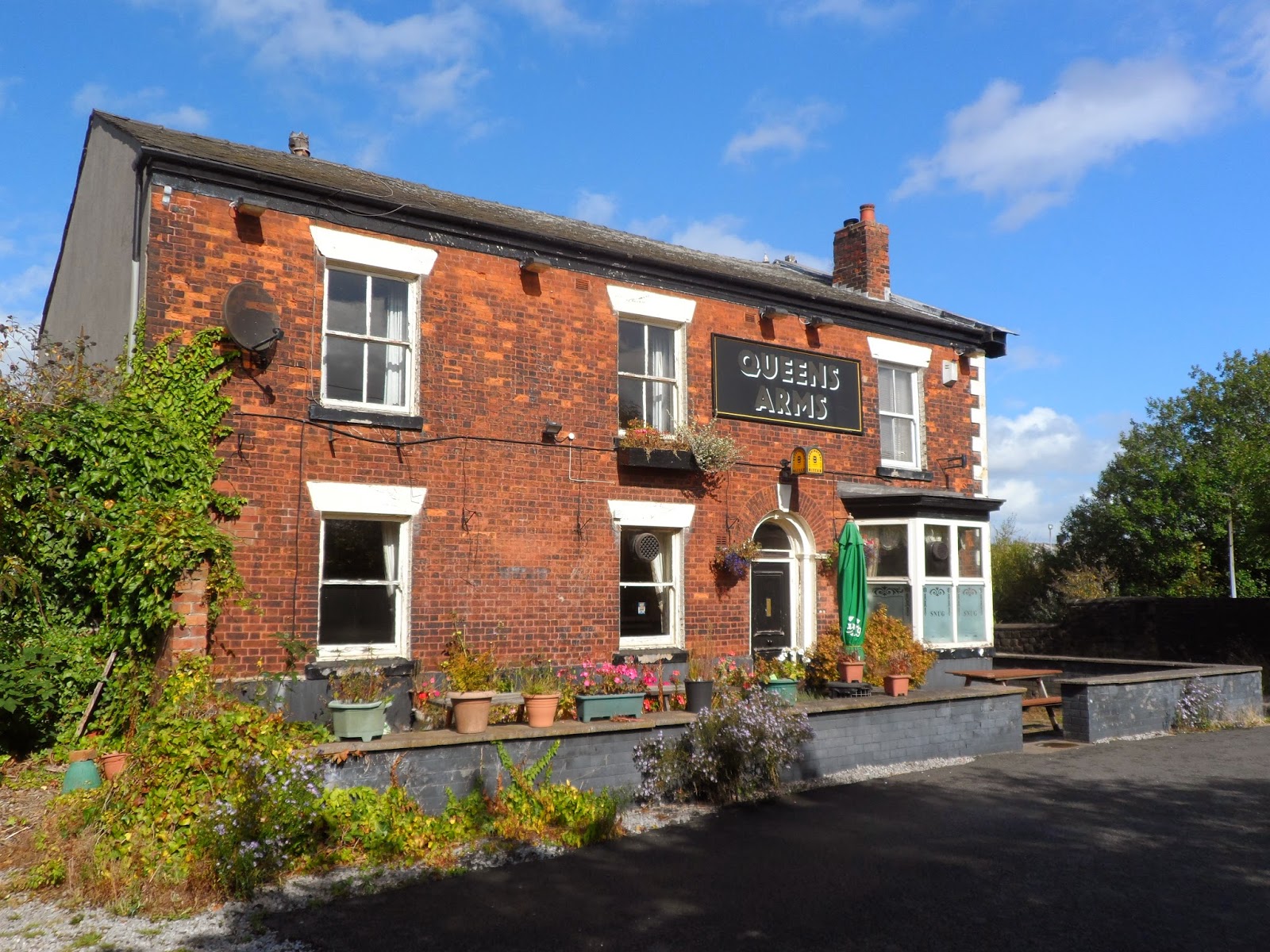 In 1851, Queen Victoria took a train from Liverpool to Patricroft, then changed to a barge on the canal to travel to the Earl of Ellesmere's estate.  It's said that she used the Patricroft Tavern's facilities, and so they changed the pub's name in her honour.  I'm not sure what they mean by "used the facilities"; I hope it means she had a pint of bitter and a hotpot, and not that she nipped to the ladies. 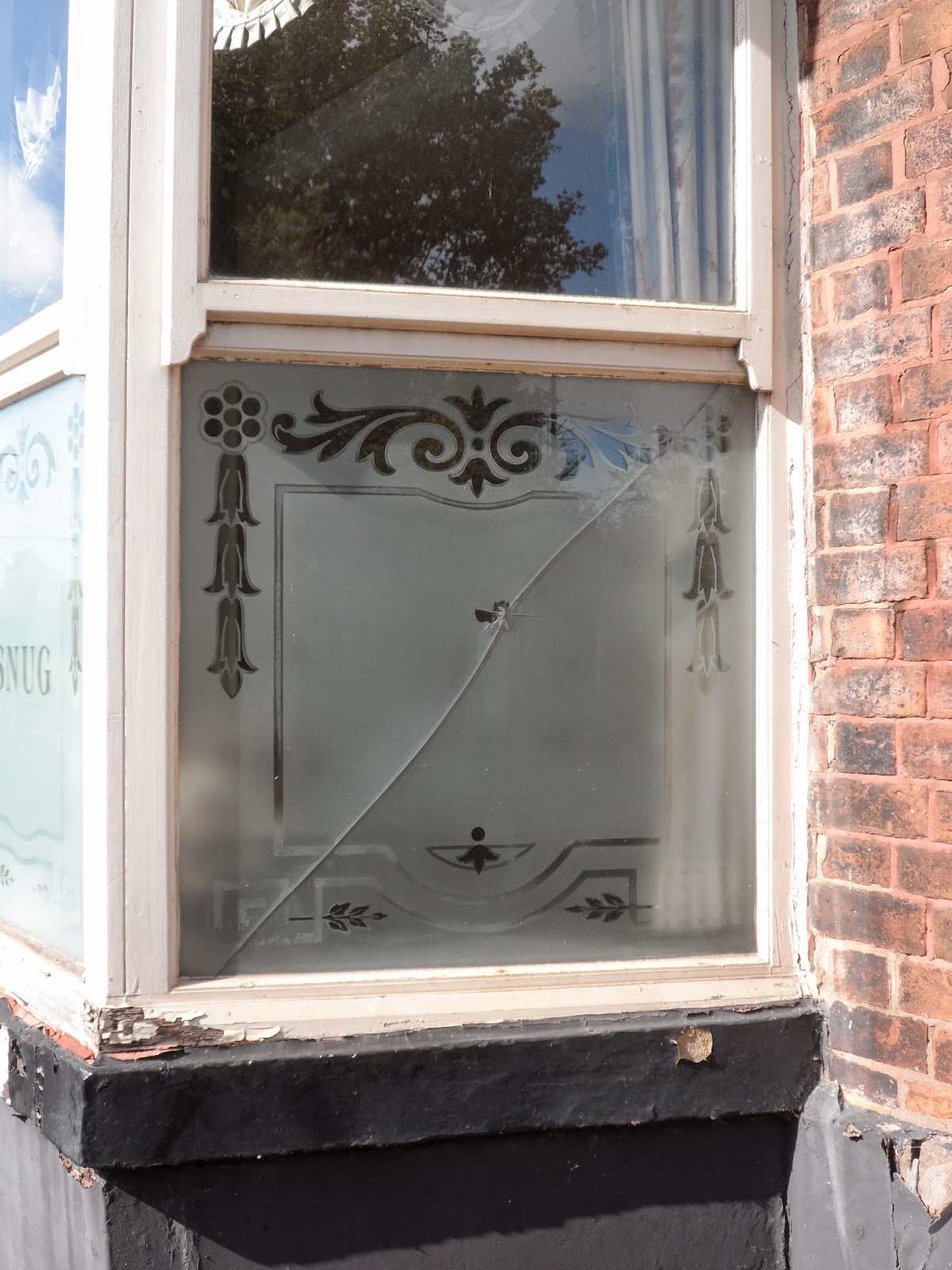 I'll never know; the damn place was closed.  It turns out the Queens Arms only opens in the evenings during the week.  How ludicrous.  I can sort of accept that little village pubs in the Yorkshire Dales don't have the custom to open during the day, but this pub is in Salford.  Surely there are plenty of alcoholics and/or lonely pensioners with nothing else to spend their money on in the area? 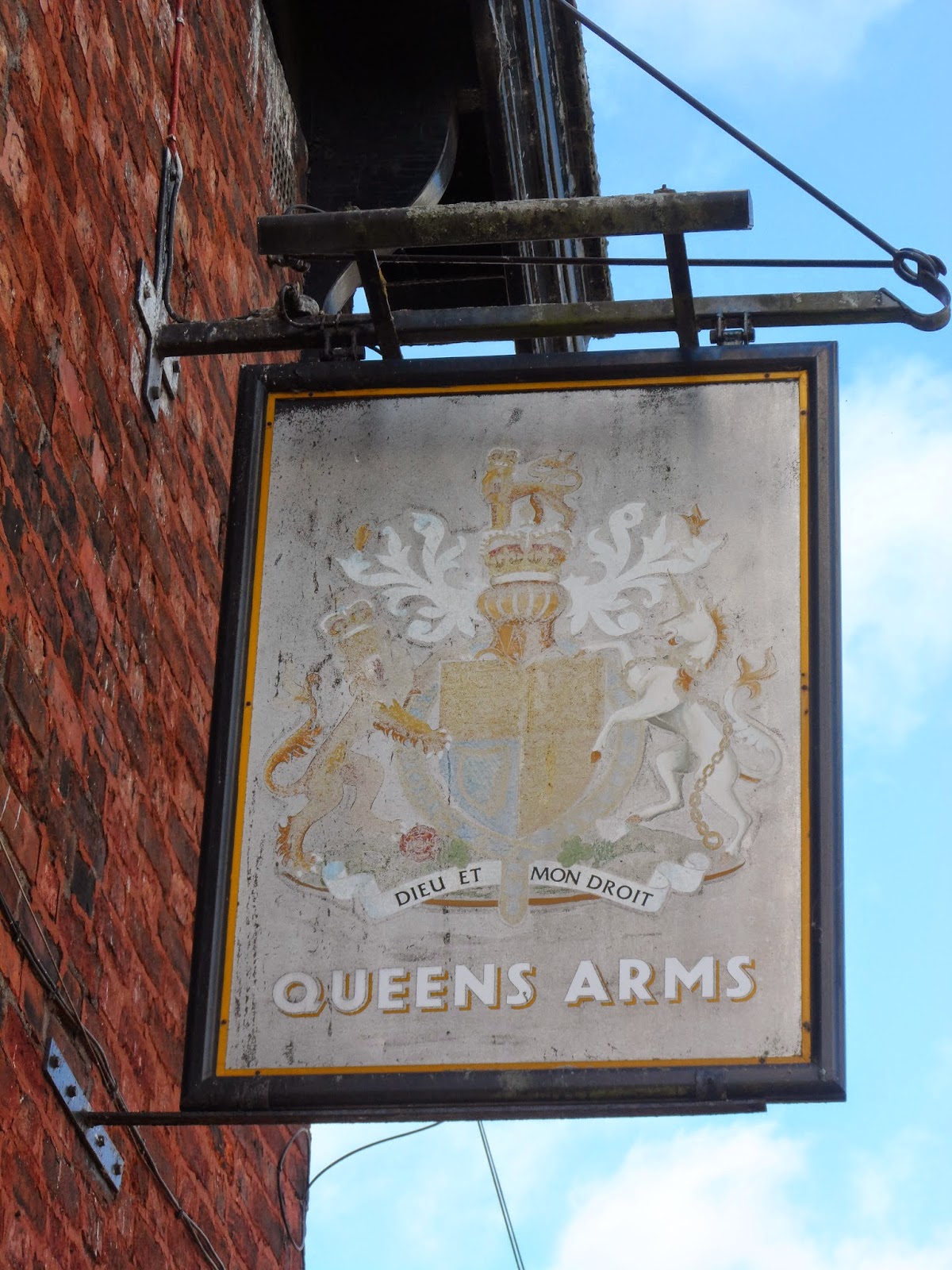 It meant a sheepish walk back to Patricroft station for the sign picture.  But how to take it without catching the interest of the local ragamuffins?  The answer is to take a very bad picture at a sufficient distance, then leg it before they notice. 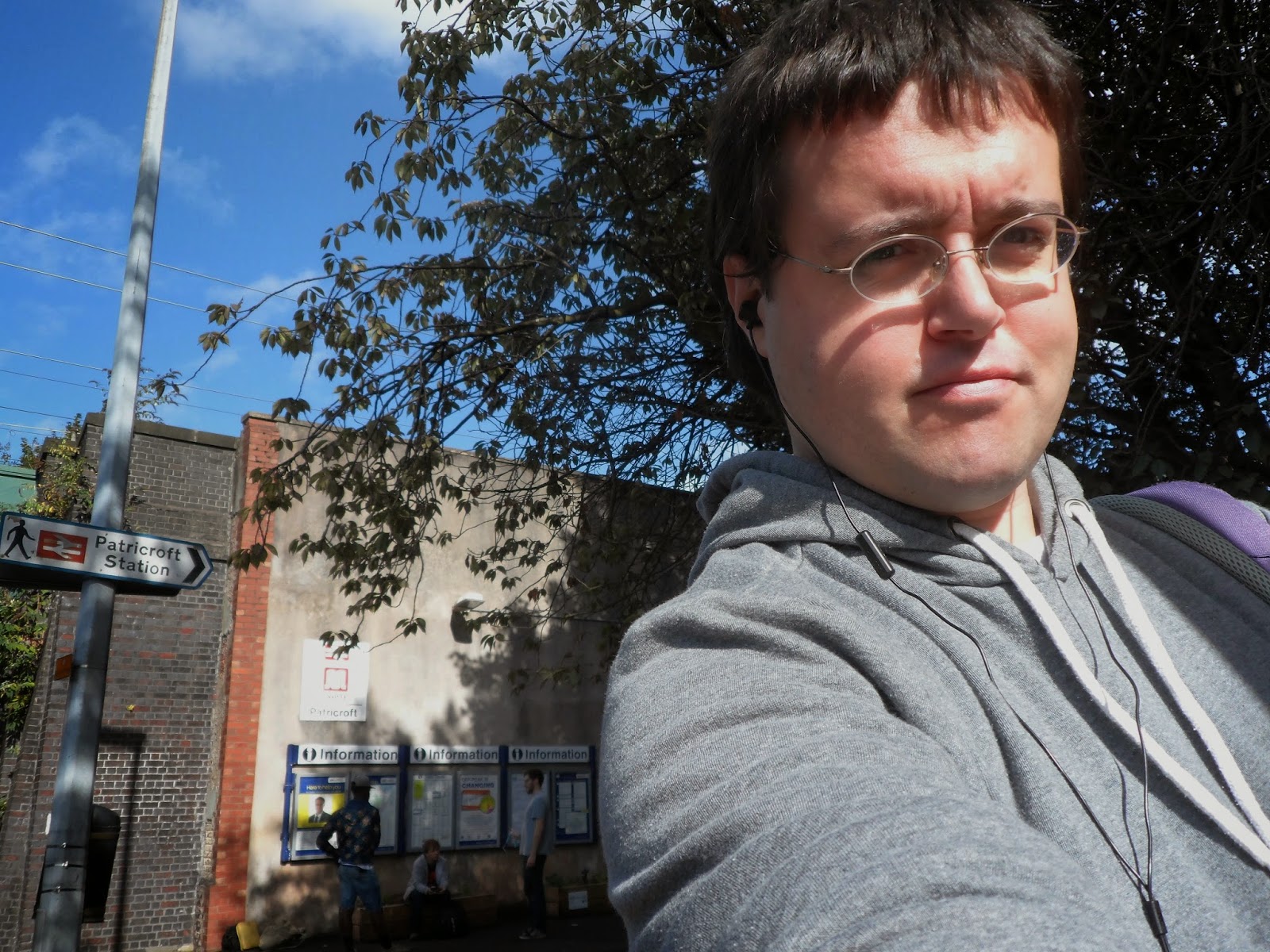 There is DEFINITELY a station sign in there.  Honest.  In fact there are two. 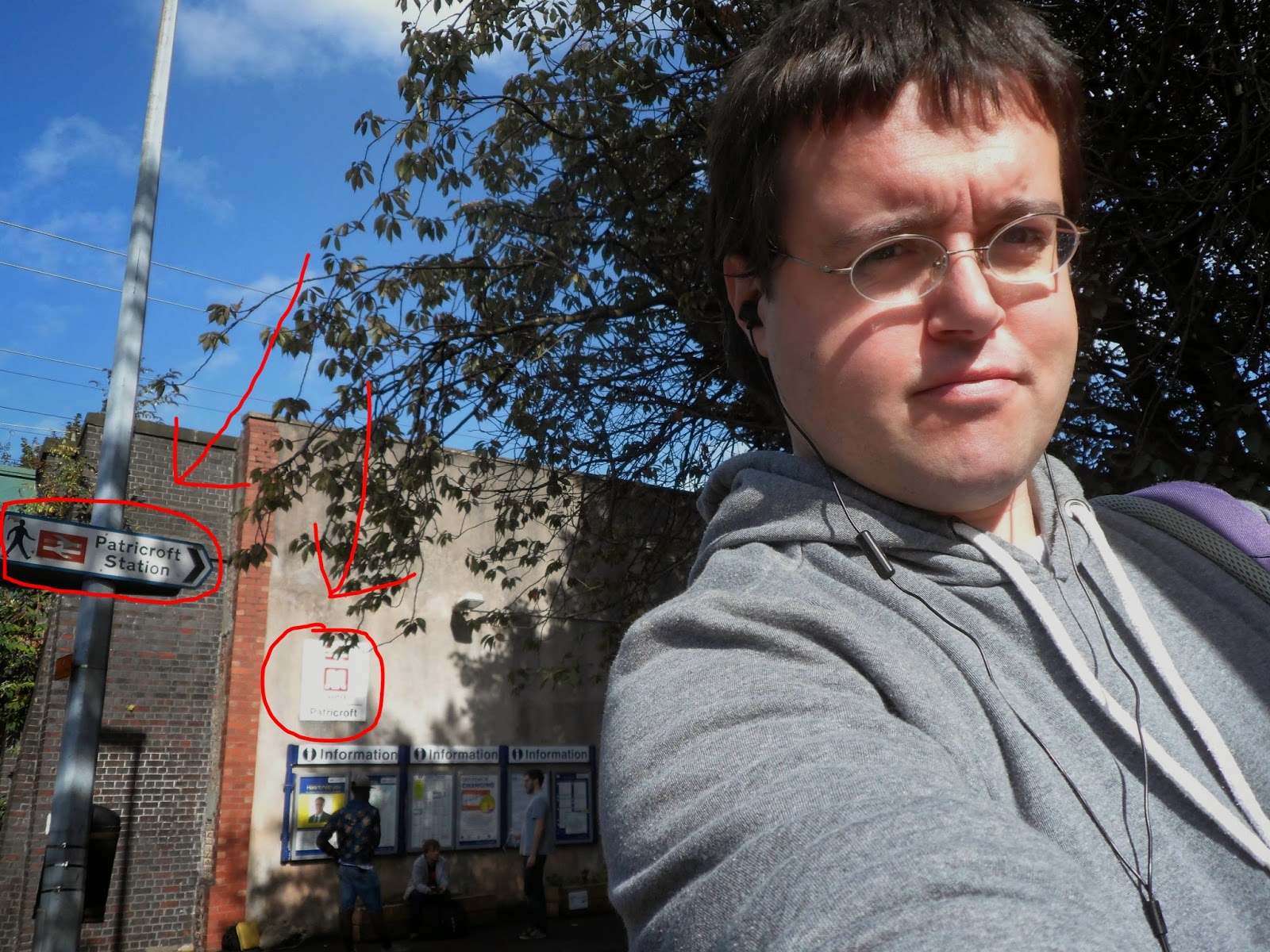 I dashed off at a speed that was a little bit too fast, while behind me, the youths paid absolutely no attention whatsoever.  Beyond was a tight estate of housing association flats and maisonettes, matched over the road by new builds (no doubt on the site of some demolished factories).  At Police Street, the former station had been turned into a new apartment block, given the unpromising name of the Shackles.  The attractive stone frontage was now backed up by a bland box. 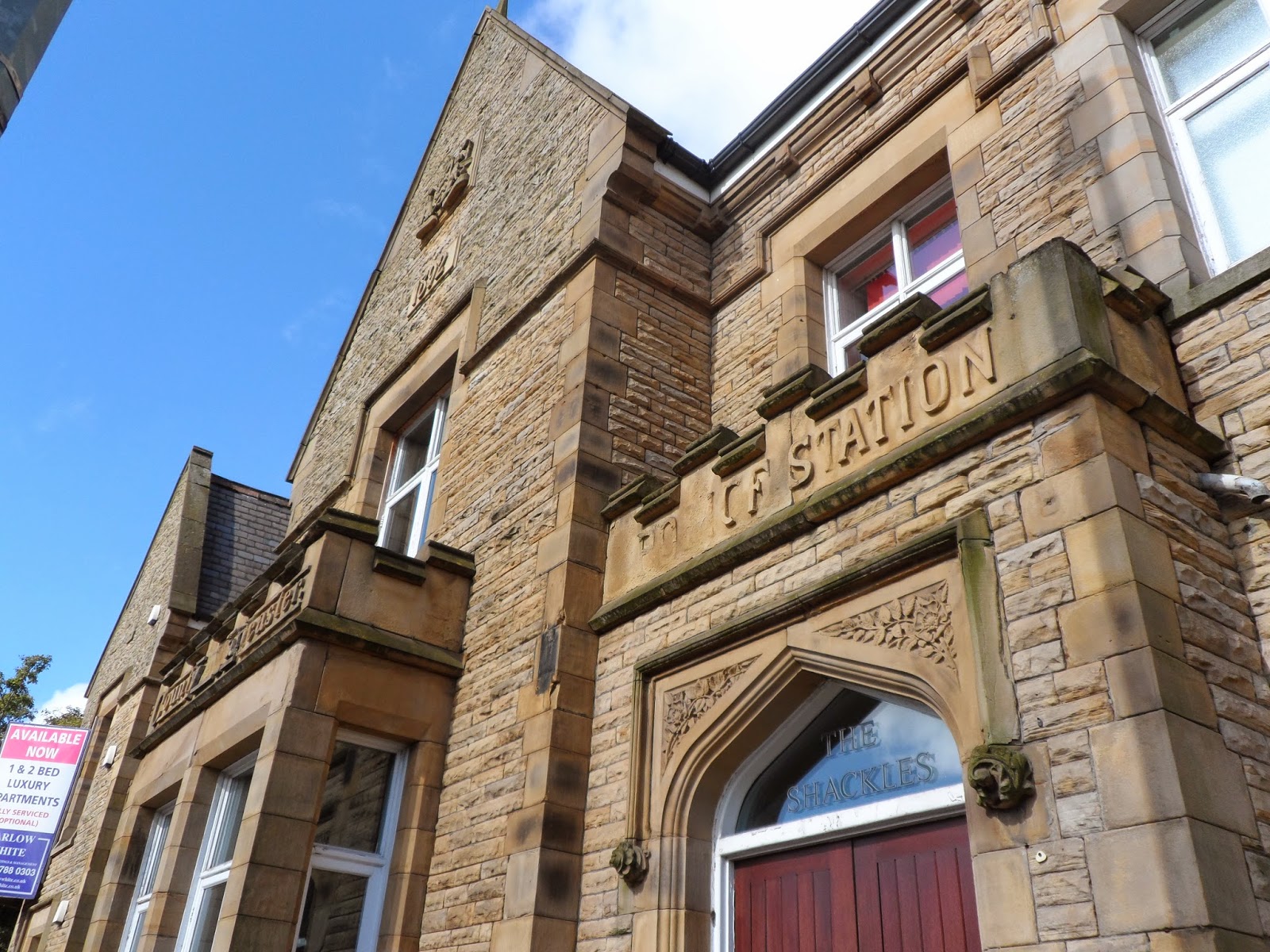 I turned left at Cosmo Bingo (formerly the Palladium Cinema) and entered Shakespeare Crescent.  An old school had been turned into flats, and a mechanics' workshop was closed and barred; by this point I was starting to wonder if anything in Eccles was still used for its original purpose.  An impressive brick tower scraped at the sky in the distance, like a mini mill chimney. 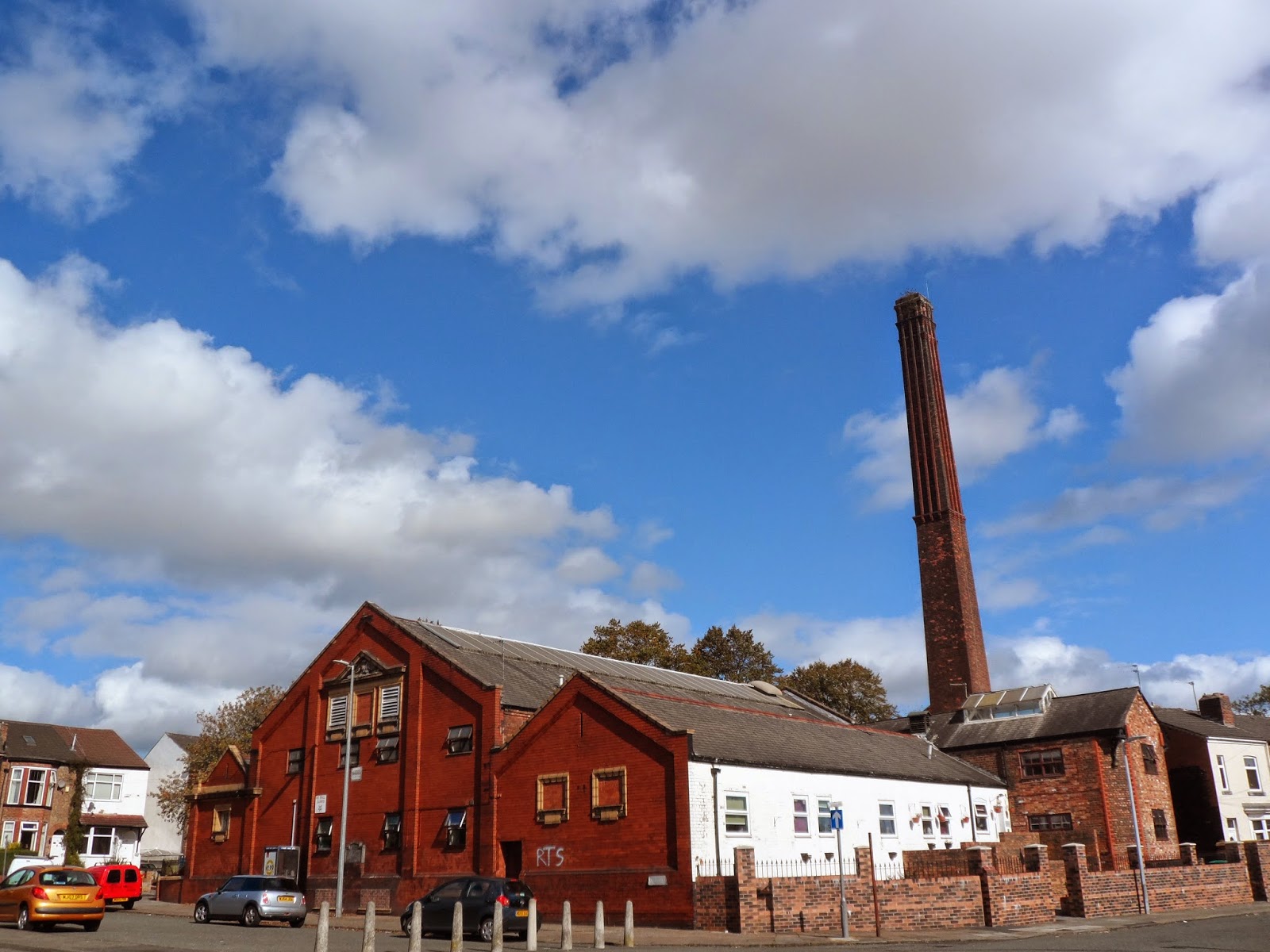 Closer inspection revealed a grand stone tablet on the side to commemorate the Public Baths Extension; disappointingly, it was unveiled by a Councillor, not an Alderman.  I always like it when it's an Alderman. 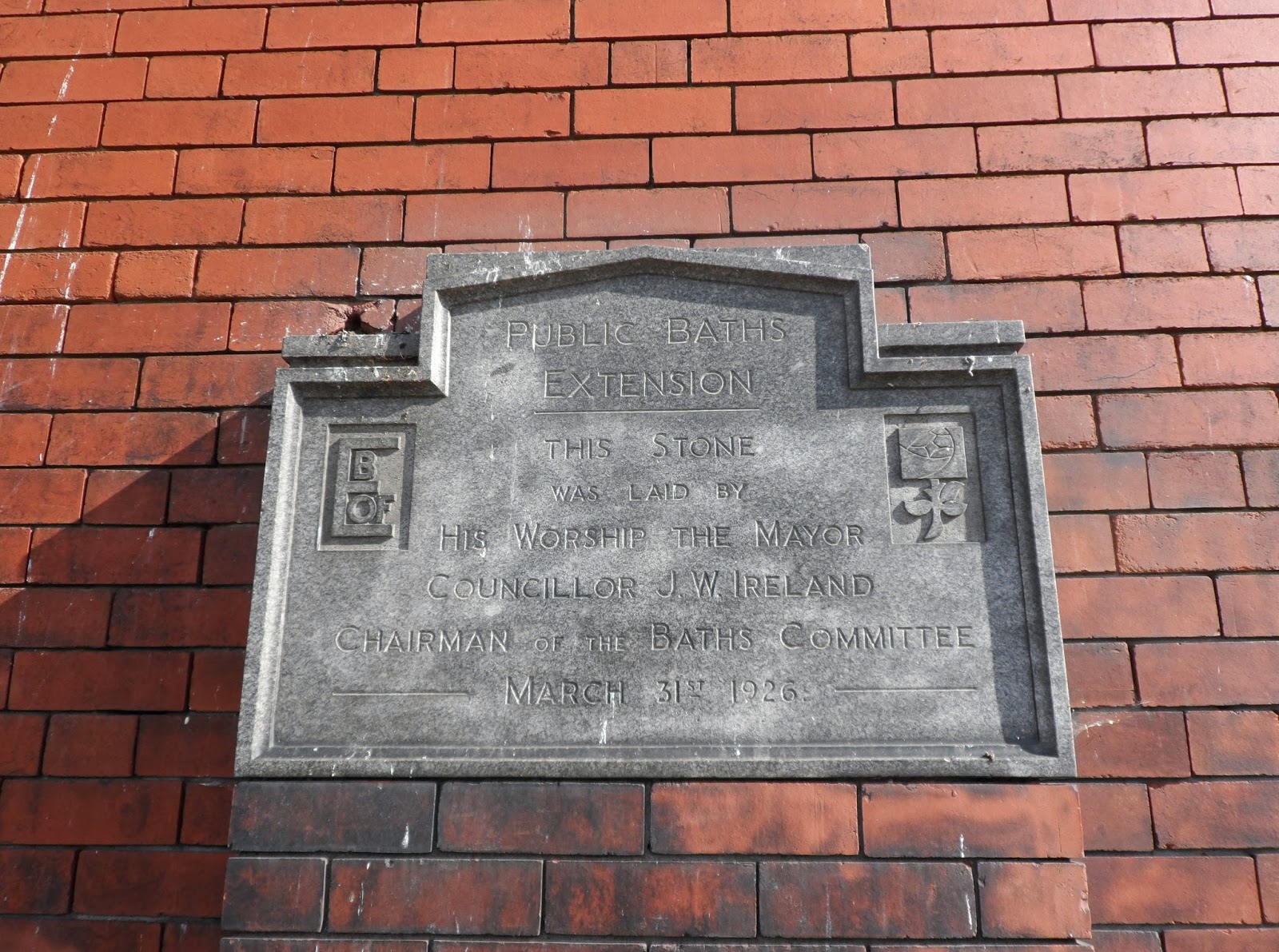 Sadly it was another Eccles public building that had been turned over to a new purpose.  There were flats in the extension (raising the pleasing image of people swimming to their front doors) and a community centre hosting a Macmillan coffee morning in the centre.  The fine tile work reading "MALES" and "FEMALES" remained, but one of the doors had been blocked up, and an ugly wheelchair ramp blotted the front. 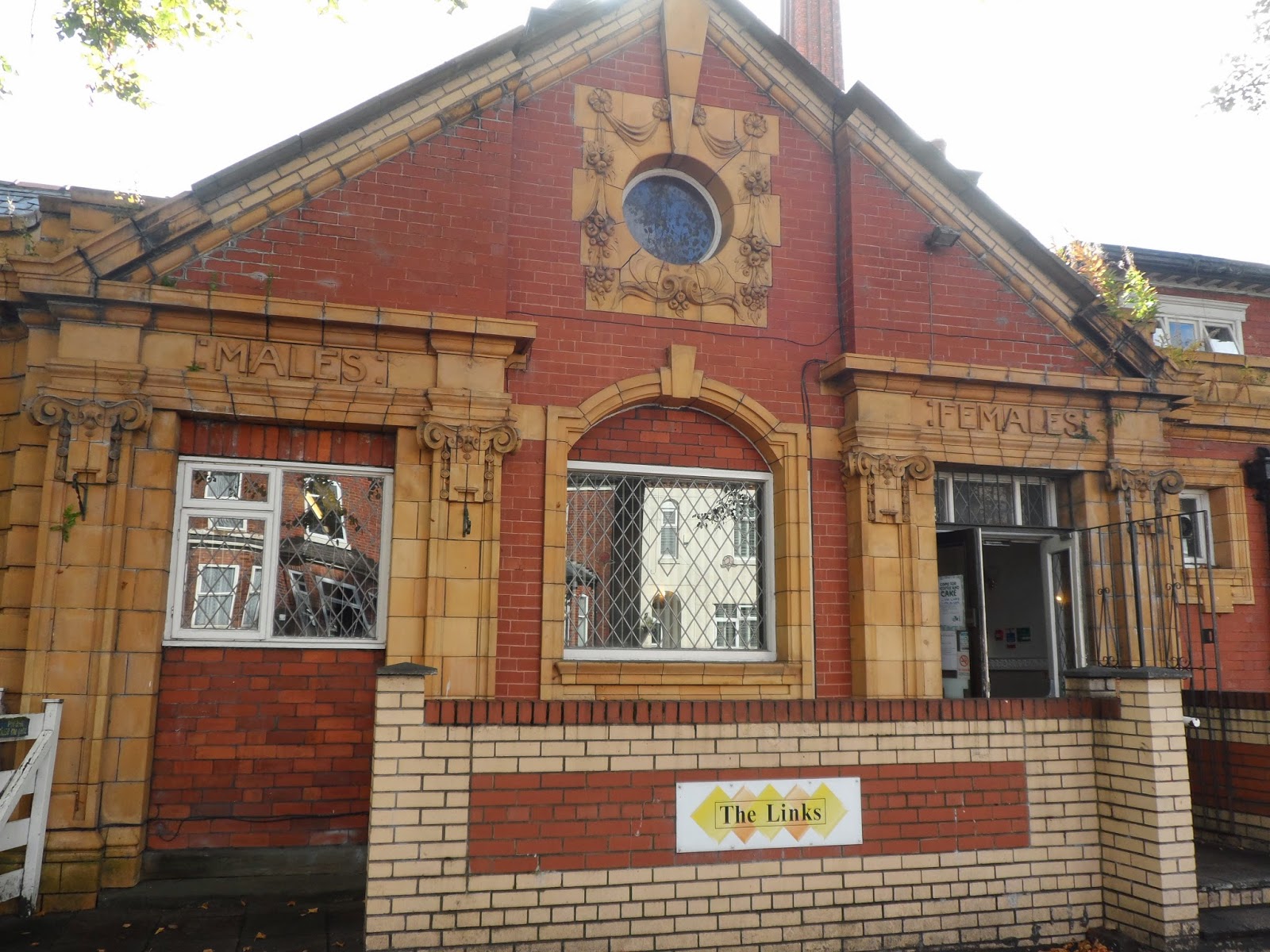 A Drill Hall, the faded lettering on the top declaring Defence Not Defiance, was also abandoned and for sale.  It left me feeling melancholy.  Like the town would have closed up forever, only they heard I was coming so they pretended some of the buildings were still useful.  I left Shakespeare Crescent for the busier Liverpool Road, in the hope that the traffic and pedestrians would bring a bit of life to the place.  It was a stream of small low-class shops, some of them turned into weird projects (the "Redeemed Christian Church of God Wisdom Centre" in what looked like an old bank), others adapting to the changed demographics of the area.  There was a Polish supermarket with a photograph of a chirpy looking lady in national dress on the door, and a barber advertising a Turkish shave.  Further on, the local mosque was emptying after the early afternoon prayers; neatly dressed Muslim men spilled out across the road, shaking hands, dashing to the bus stop.  The restaurant across the way was taking advantage of the rush of customers.  Rather than open up the full kitchen, a table had been erected on the back entrance, and two women were selling freshly made samosas for two pounds. 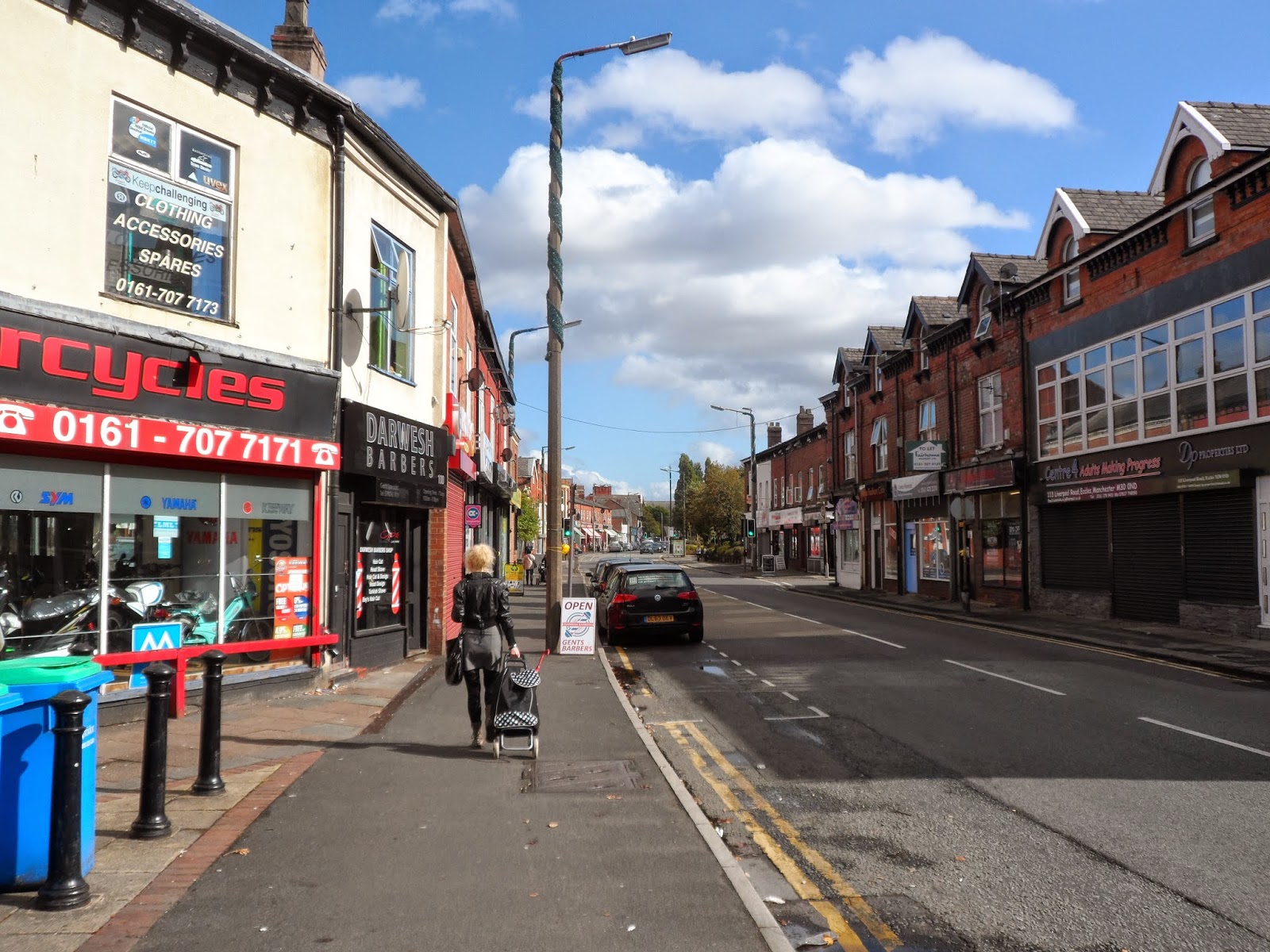 I cut in front of some friendly looking 1950s flats, set amongst their own lawns, and reached a strip of new paving which heralded the town centre.  Some great Victorian buildings had been augmented by newer, uglier additions, while a half-empty shopping centre skulked beneath a multi-storey car park. 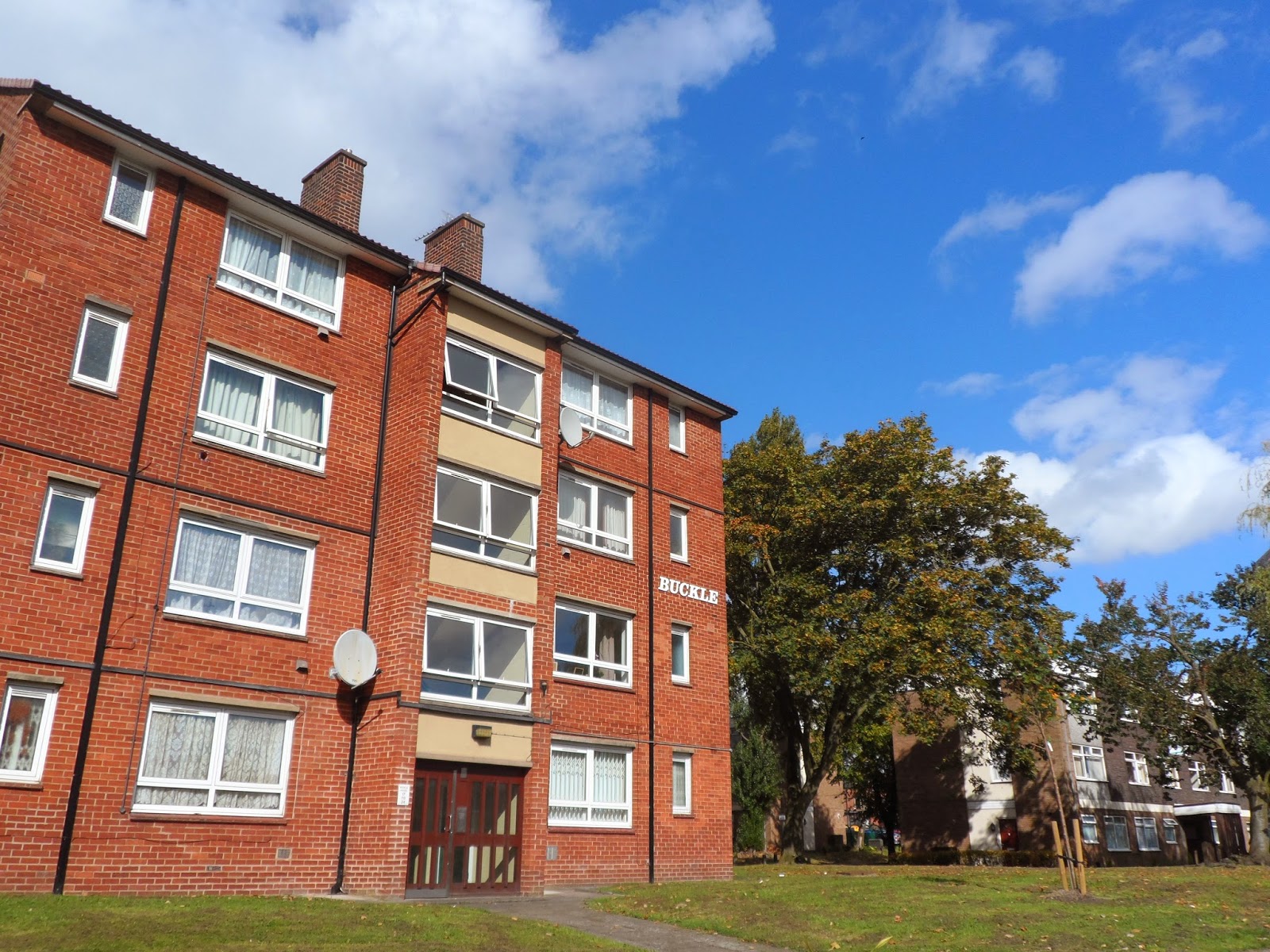 I'd hoped to buy an Eccles cake.  I was in Eccles Town Centre; surely there must be a little bakery still churning out the traditional recipe?  Nope.  Not a one.  In fact, Eccles cakes aren't even made in Eccles any more - the factory for the main producer is now in Ashton, on the other side of Manchester.  Even the surprisingly posh Greggs (brick effect walls and black and white photographs) didn't sell them. 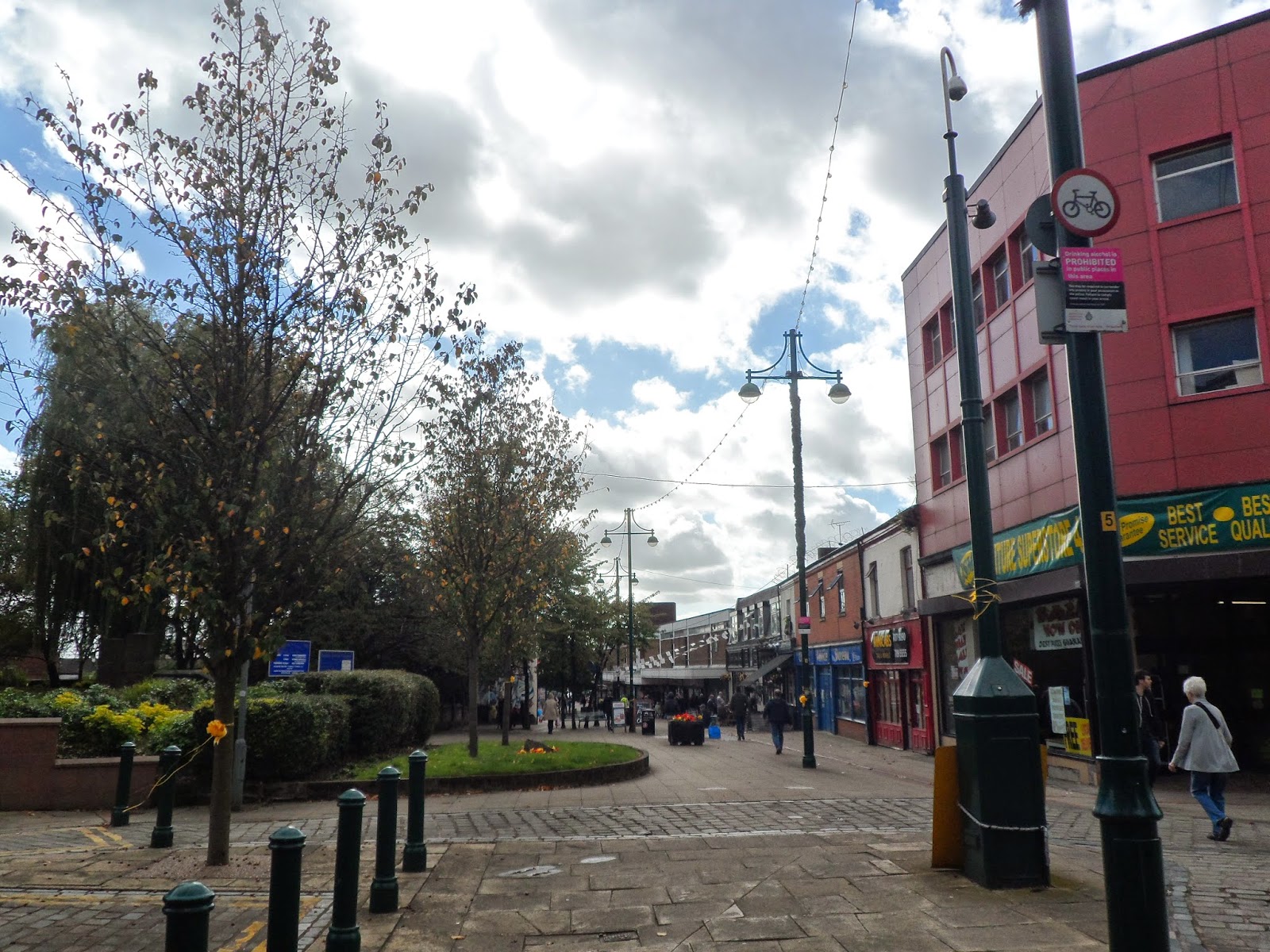 I headed for the churchyard, not in search of spiritual enlightenment - the drunks getting wasted on the bench would stop that - but in search of HUSKISSON!  Long-term blog readers (hello you!) will remember my dogged pursuit of references to William Huskisson, former Liverpool MP and the first man to be killed by a train.  Huskisson's leg was run over on the track just outside Newton-le-Willows, and it was decided that he was in too serious a condition to be taken all the way to Manchester for medical attention.  Instead, he was taken to the parsonage at Eccles, as a half-way point, and the doctor came out to him.  Sadly he died the next morning. 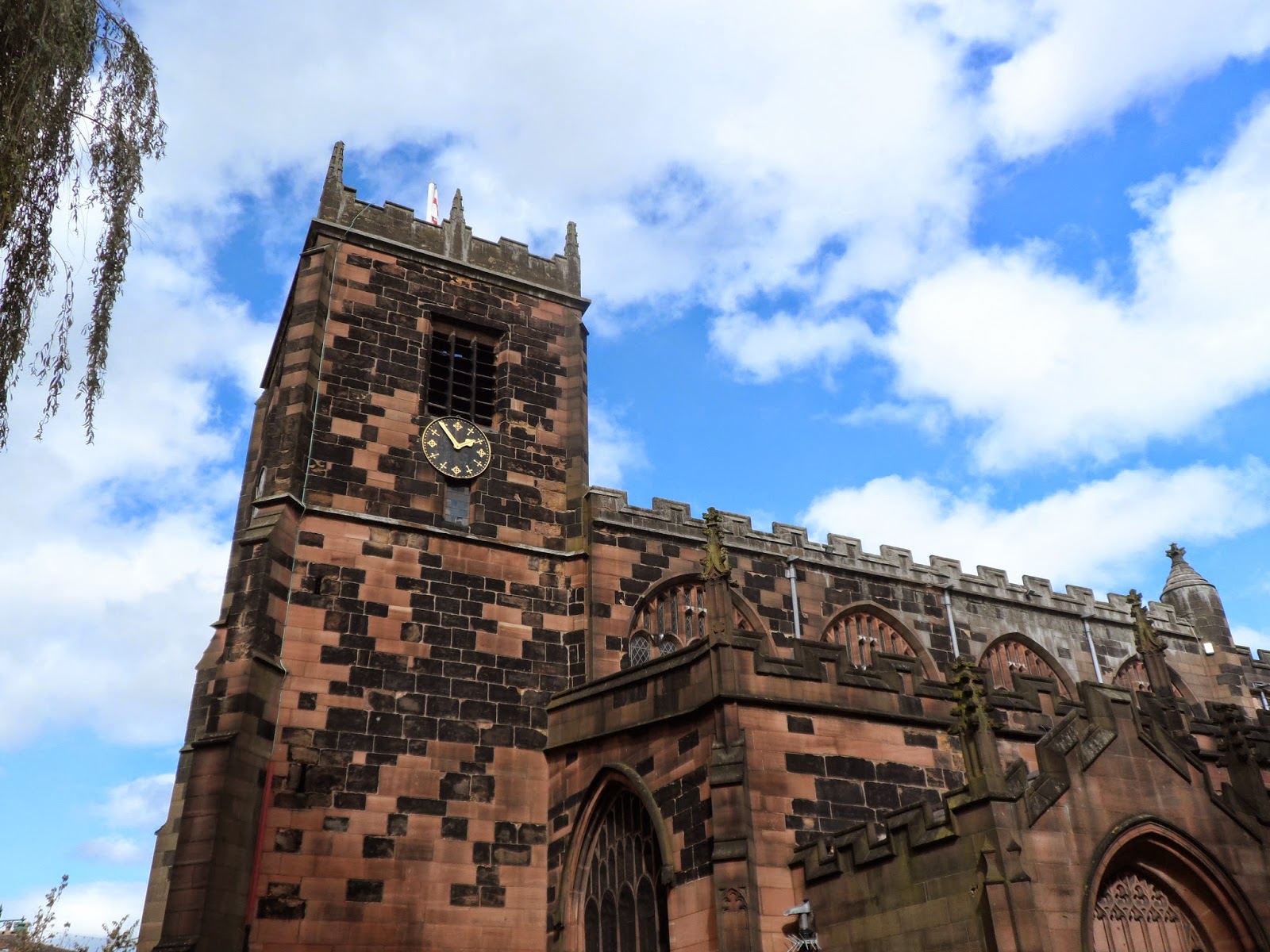 Surely there'd be a plaque, or a memorial, or a statue or something?  Nothing.  Not a mention.  And the church was closed and locked, so I couldn't even go in and have a poke around.  I thought back to that tiny village church in Scotland that was open for anyone to walk in and look round, even though it was miles from anywhere.

Basically, Eccles was a bust.  It was an unwelcoming, sad little town.  It has two good points.  The first is the Metrolink, which terminates in the town centre alongside Morrison's.  Trams make everything better.

The second is Phil, long time reader of the blog, who lives not far out of the town centre in a very nice flat.  I went round there and spent the rest of the afternoon drinking tea and gossiping, and it was easily the most pleasant part of the whole trip.

Even Eccles station was a mess.  Phil dropped me off for my train back to Liverpool, and I found a load of building works and a low, ugly ticket office. 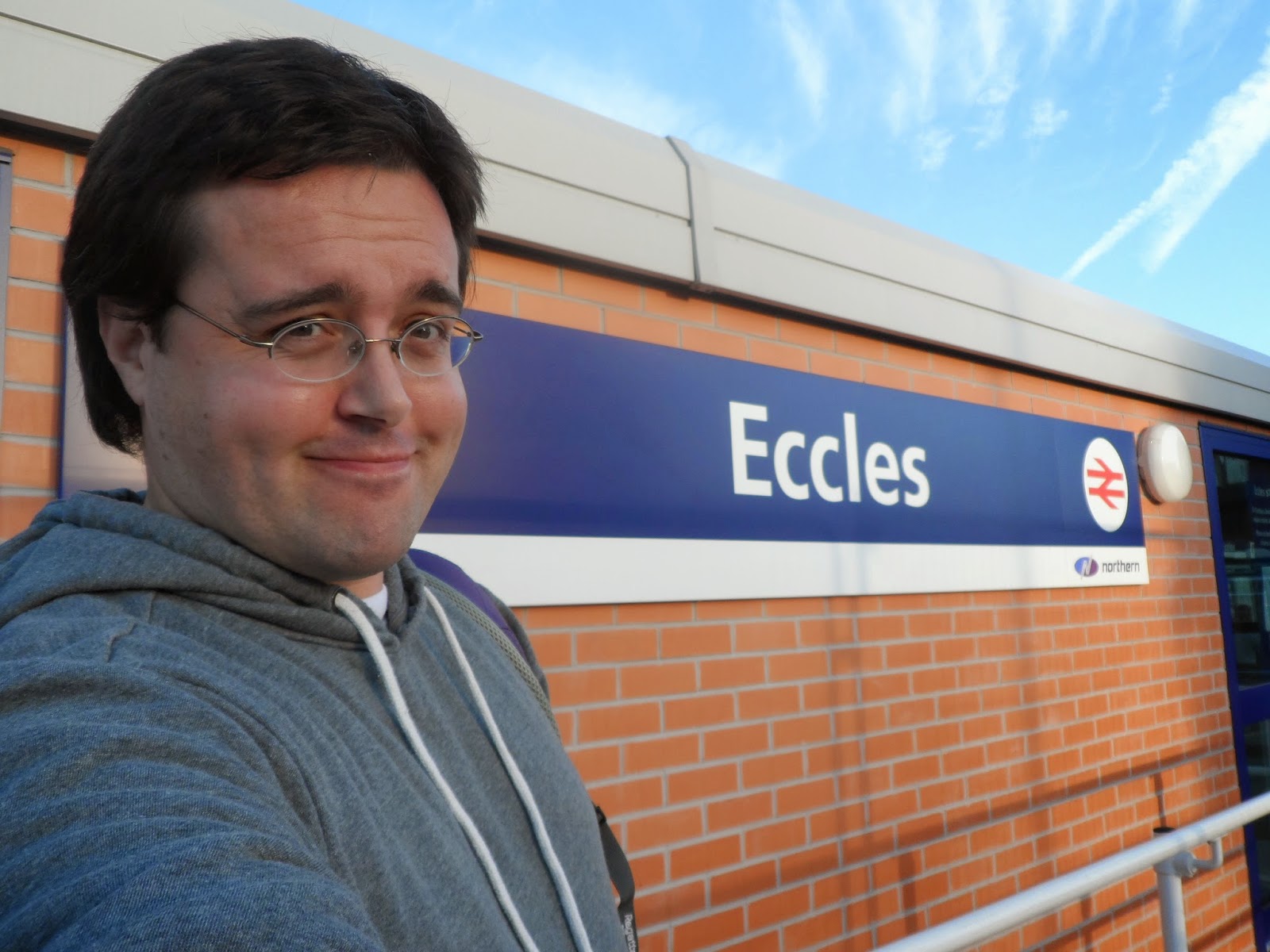 Fair enough; it's in the process of getting a new forecourt.  And the original wooden station building burnt down in the Seventies.  But compared with the gleaming glass of the Metrolink/bus exchange, this little box squeezed behind the M602 was a let down.  It's part of the world's oldest railway system, remember; it's where Huskisson came to die; it should be a little bit impressive.  Manchester's suggestion that the line be declared a World Heritage Site for its historical importance seems rather hollow when you look at the stations within the county boundary.  Liverpool and Merseyside have Edge Hill and Rainhill and Newton-le-Willows and Broadgreen; historic sites with well-reserved railway buildings and features.  Greater Manchester can offer up Patricroft and Eccles, neither of which are attractive or particularly historic. 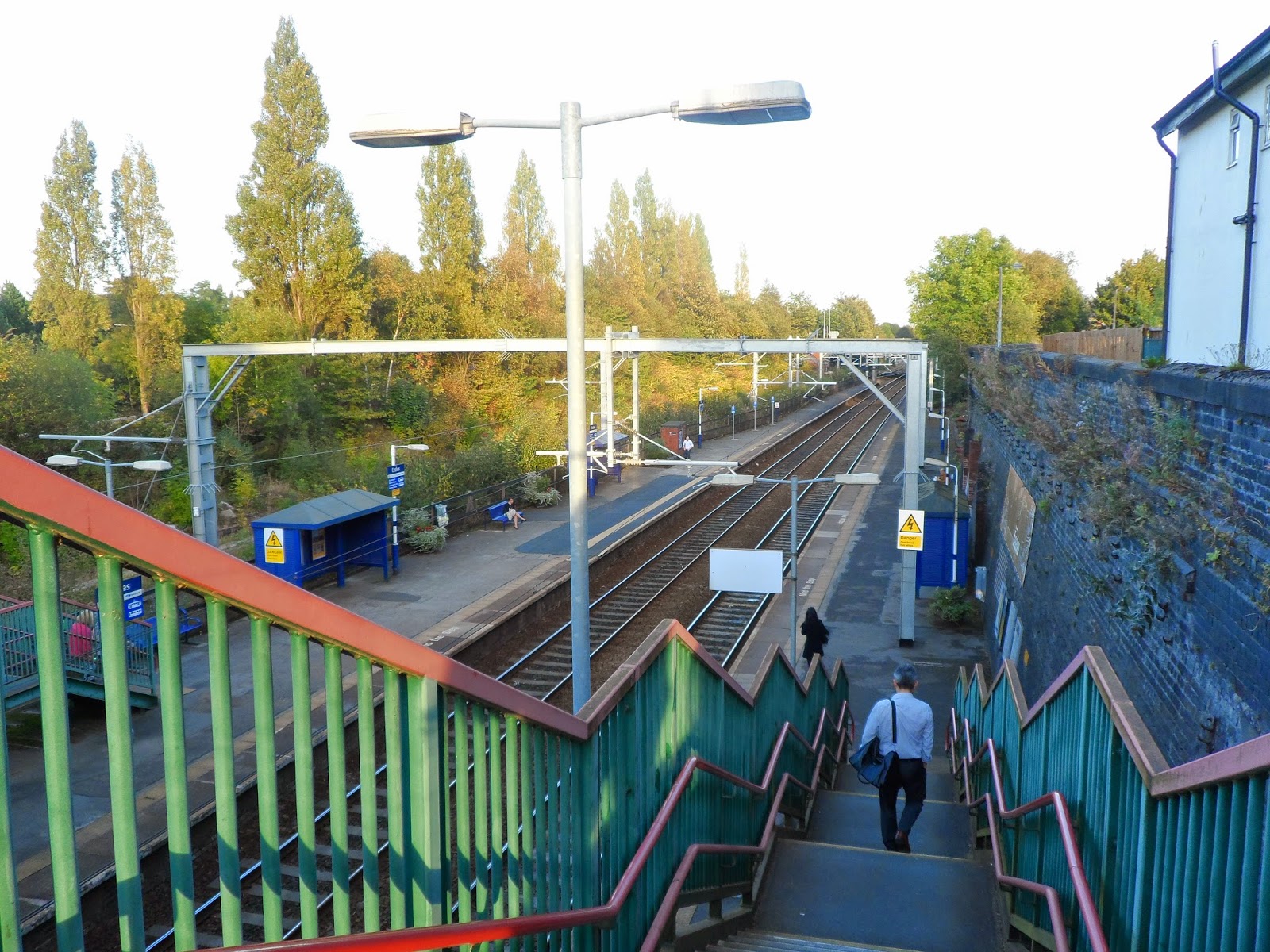 The Friend of Eccles Station (or, as they're more brilliantly known, FRECCLES) have put up some posters detailing the line's history, but I sadly didn't have enough time to read them.  I did get a good look at the gantries for the coming electric trains though, and fantasised about the day when I'll be able to take a fast, quiet train here.

Then a Pacer rattled up, and spoilt everything. 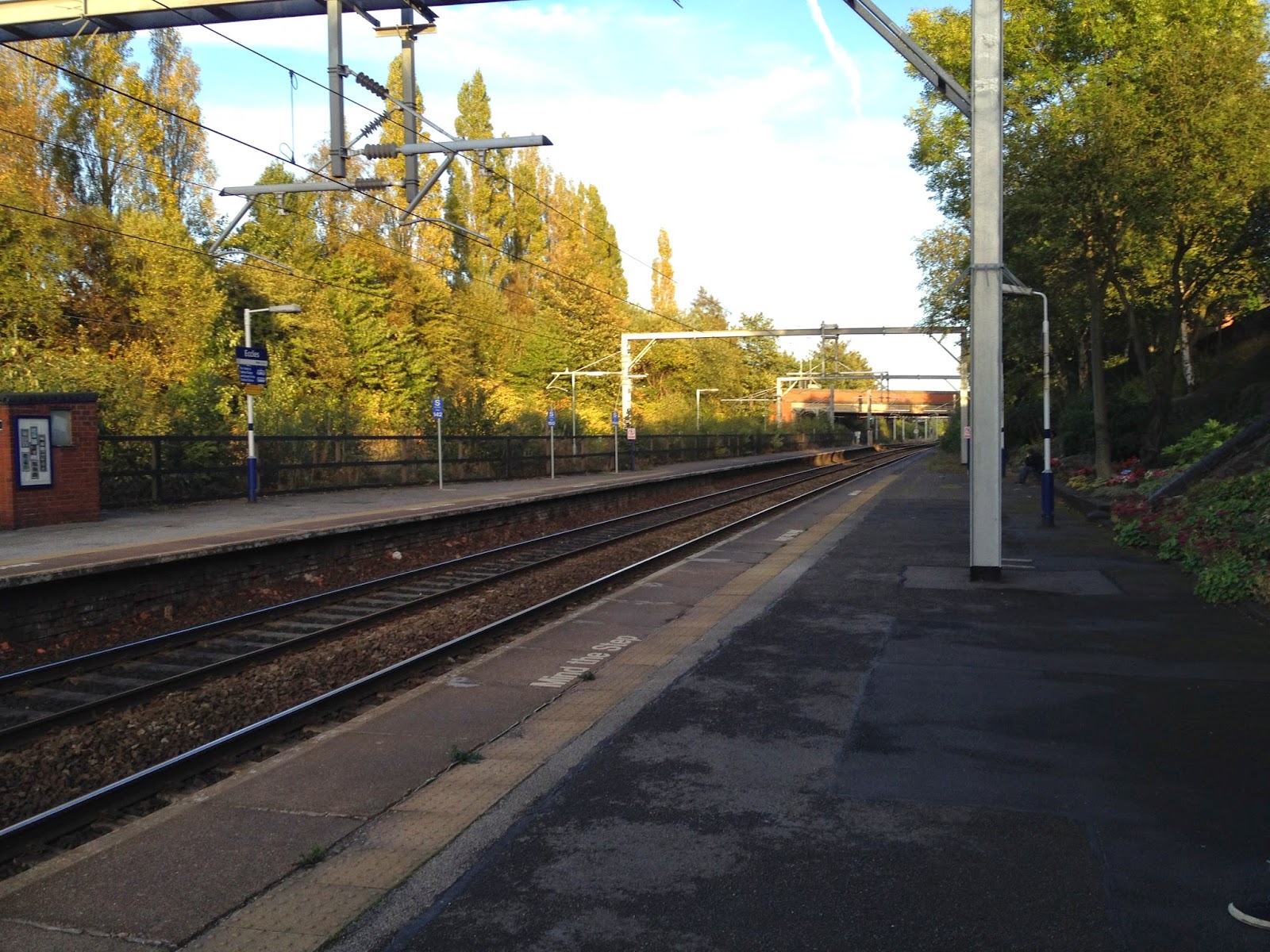 There's a mosaic of Stephenson's Rocket opposite. So you know, there's that.

Hi there I've stumbled across your blogs and would like to say there absolutely fantastic thank you for the time you've taken to write them.
Hope this reaches you. Cheers

Hey...The centre opened it’s doors last year and provides a purpose built facility for a host of martial arts as well as gymnastics, zumba dancing an more.It has played host to some of the biggest names on the world stage in martial arts while also hosting a number of major fundraising events.See more details here-Midlands arts center