I'd been to see my friend Jennie, which doesn't happen often enough. She works at Edge Hill University, my old alma mater in Ormskirk, so visiting her is doubly pleasurable: I get to see her, and what condition her pregnant belly is in at the moment, and I also get to do a nostalgia trip round the campus. Not that there's much left from my day (fifteen years - erk). I used to have Writing Fiction classes in a white hut that was probably leftover from the war; that's been replaced by a huge silver building that looks like a stormtrooper's helmet. Everywhere you look there are steel and glass monoliths that dwarf the old landmarks I used to love.

So anyway, Jennie and I met up and went into Ormskirk for a meal. After walking out of Echelon because the staff couldn't seem to be bothered serving people, we headed for the Left Bank Brasserie. A very good decision, as it turned out, as the food and service were light years ahead of anything Echelon had to offer: highly recommended.

Jennie dropped me off at the station around nine o'clock. The train at that time on a Friday night is a funny thing. The serious clubbers have already headed into town, to get tanked up before they start. The last minute dashes into town won't happen until the pubs close around eleven, and drunks head for the final train to chance their luck.

I sat in the still-gleaming station building to wait the twenty minutes for my train. There was only one other person in there, a man in his fifties who shifted from seat to seat uncomfortably, as though he was sizing them all up. I wanted to interrupt and tell him that they were all equally unpleasant. 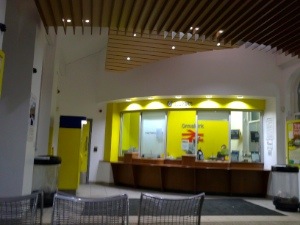 Behind the counter, the bored station master was staring at his smartphone. I'm not sure what he had on there - judging by the levels of scrutiny he was giving it, I'm guessing he'll be going blind soon - but it entirely captured his attention while I sat there. Who can blame him? Nobody came through wanting a ticket.

There were a few people on the platform who'd forgone the warm waiting room - probably because of the man playing musical chairs - and when the train came we spread ourselves along its length. 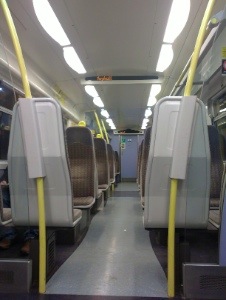 The amount of times I have taken this journey! Travelling through cold, dark nights headed for assignations in Liverpool. My first boyfriend would pick me up from Moorfields, and I'd travel in to meet him slightly sick with excitement. The trains were always empty and slightly melancholic. Of course, that was in the days before the carriages were refurbished, when there was a musty smell to the seats, and they usually showed the ravages of the Saturday crowds in their roughed up seat cushions and litter. Later, after I met the current Bf, I'd head to his for the weekend, usually with a bag of washing so I could skip having to use the launderette on campus.

I leaned against the glass and watched the dark. The route back from Ormskirk travels through countryside for the first part, then a lot of deep, impenetrable cuttings, so at night all you see is blackness. Then you burst into the hot white glow of a station and one or two people shuffle on board. There was thick fog that night too - as Jennie and I concluded, weather to be raped in - so even the lights of the houses were obscured. I may as well have been underground.

My fellow passengers were the same people I used to travel with when I was a student: the buttoned up young girl, slightly anxious at being alone in the train. A guy in his twenties with earphones rammed deep in his ears. Through the glass of the interlinking doors, I could see two rude boys restlessly wandering the carriage, baseball caps tucked on the back of their head, swinging idly off the poles. I used to be terrified of having to share the car with people like them, waiting for them to get bored and pick on me for some imaginary slight. Never happened.

At Old Roan, noise and excitement came aboard in the form of four drunken women, mid forties, partying hard. Slightly tipsy and talking loudly about what a good time they were going to have, though they weren't going to get too drunk. One turned to her friend and asked about her shoes, "Are they ok, Jackie? Because they really hurted you?". I resisted the urge to lean over and correct her grammar, but only just. They lost some of their fizz as we continued; the Christmas ban on alcohol on Merseyrail meant they didn't have anything to keep them topped up all the way. 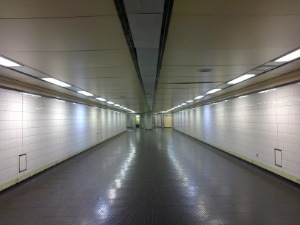 I was the only person to get off at Moorfields; I usually am. It's always my preferred station, so much better than the hustle and fuss of Central. I can't deny it was a bit eerie wandering the empty corridors, the only sound being the rhythmic grind of the escalators.

There's something beautiful about a quiet train, something that slices into you and makes you run back over your mind. My journey had been a strange mix of memories and the present, as though I was viewing everything through a filter. Fifteen years since I'd done that journey for the first time, and even though there was a new Ormskirk station, and the trains turned purple, weirdly, I felt eighteen again. 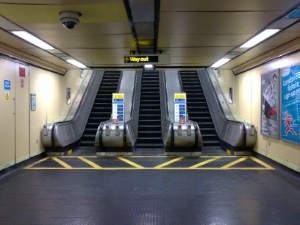 A beautiful piece of writing. You've captured all of the pleasure and sadness that can be evoked by travelling on a train at night. Nice one.