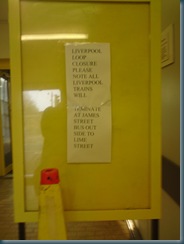 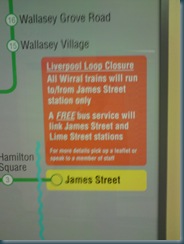 I think Merseyrail's problem is a PR one -- they have failed to explain what's actually going on and why a 6 week closure is needed. It's not your usual Sunday engineering job; over the last few years they have completely ripped out both the rails AND the concrete base they sits on to replace with new, non-derailment-causing track. This article has a good overview of the works.

PS: Network Rail's contractors are accessing the tunnels via Moorfields station and I noticed the other day that their Health & Safety noticeboard in the booking hall has "Interface with Merseyrail passengers" listed as a potential hazard!

Indeed: where's the Echo's reporter going down underground for a report from the work site? After all, they'll print anything (cough).

As for "Interface with Merseyrail passengers" being a hazard: are you sure that wasn't a warning for people getting the last train back to Birkenhead?