It's My Party, And I'll Tart If I Want To

Out into the sticks to collect railway stations as a birthday treat; you can't say I don't live life to the full. I'd planned on hitting a load of stations on my day off from work, taking advantage of the weekday timetable to shuttle me around. However, the Bf suddenly revealed that he'd managed to wangle a day off as well, and in a rare moment of selflessness, I decided that dragging him around various parts of suburban Liverpool was a bit cruel.


Instead I proposed a quick one two; knock off the last two stations on the Ormskirk line, the often overlooked (by me, anyway) Town Green and Aughton Park. It would be a simple enough trip, we'd get it out the way, then we could return to town for self indulgent treats.


The Bf had never been on this line before, so we positioned ourselves by the windows to watch the scenery roll by. Sandhills looks like it is almost complete, but there were still builders and scaffolding around, so there'll be a return visit another day. There was certainly no sign of its ALF - it had best be coming back, Merseyrail, or I'll be having words. I noticed that little signs had been put up at Orrell Park to let us know that the station had been adopted by volunteers; I've previously noticed how cheery and clean it was, so I'm glad the volunteers are getting some credit. And the Bf was ridiculously pleased by all the horses at Aintree.


We crossed the county line just past the Ashworth Maximum Security Hospital and plunged into Lancashire. This is faux-Lancashire, though, not the real, rugged, War of the Roses and mill town Lancashire. Maghull, Ormskirk, Skelmersdale - these towns are Liverpool satellites, no different to St Helens or Birkenhead, and the end of Merseyside here is a largely arbitrary line on a map. The main sign that you've left Scouseland behind is the sudden disappearance of the yellow and grey Merseytravel M from the station signs. Again, this is pretty arbitrary, because the stations are owned and run by Merseyrail. 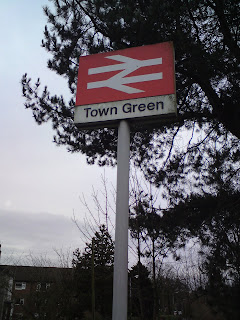 Off at Town Green station, located on Town Green Lane in the Town Green district, just down the road from the Town Green pub and the Town Green Primary School. They're really imaginative in this part of the world. I'd been here before, with my friend Jennie, about twelve years ago. It had been one of those boring Sundays that crop up when you're a student with no money and the weather's grey, and somehow - I don't know why - we'd gone for a walk. Thinking back, I suspect that the decision to walk down the A59 was down to me subtly influencing her. Even then, I'd been curious about train stations, and I'm sure I probably psychologically bullied her into a wander down to Town Green so I could have a poke around. We walked here, then got a train back to Ormskirk, and that was it.


So basically, Town Green wasn't going to be a surprise, unless in the intervening decade it had been radically overhauled. It hadn't. There were still two little brick station buildings, a footbridge, and not a lot else. The only sign of the 21st Century were the next train indicators, which read Ormskirk on one platform and Liverpool Central on the other. All the time. 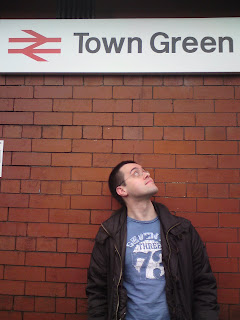 The other half's presence did, of course, mean that I didn't have to do a longarm shot up my nostril, and so Town Green's proof of attendance is a bit classier than normal. We wandered up and over the bridge, so I could check if there was still a police station in the other platform building. The signs were still there (except there were missing letters in the "Aughton" - I hope they were stolen), but it didn't seem to be open.


From there we trotted off in search of Aughton Park. You can get there quickly and easily by following the main road, but it was a mild morning, and we felt like making a bit of a walk of it, so we thrust out into the countryside. Ok, it wasn't exactly mounting the Brecon Beacons, but it was more rustic that Birkenhead.


The sky was churning above us, grey and black, then blue would suddenly burst into the mix. It was as though someone was stirring a pot of paint, mixing the colours to try and find the perfect blend. The sun could barely make an impression. 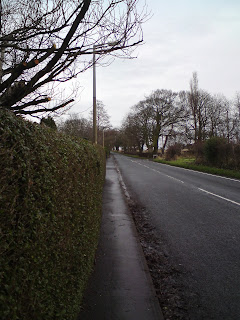 January strips the beauty out of everything. The trees that lined the road on our route were bare back in November, but they become depressing and dead in January. There's nothing to look forward to all of a sudden, no Christmas or New Year. It's always hard for me to rustle up a birthday "do", because everyone is bloated and down. Walking amongst bare brown fields and muddy paths, you start to realise why the country people made such a fuss about the blossoming of green in the spring.


This is a sort of roundabout, arty farty way of saying that the rural vistas didn't inspire me to rush off and write a sonnet. It never got properly rural, for a start. The road was always lined on at least one side by basic bungalows and villas with walls of glass: homes built for looking out of at the view, because from there you can't see the mean little pebble dashed houses. I wondered how much these exact same homes would get in a town, or a suburb, without the long sweep of fields and trees.


The greatest pleasure snuck up on us as we came round a corner - the sudden shock of a smell: burning coal fires. It's such a rich, throaty aroma, and so unbelievably evocative. For me it was more than just images of roaring fires and pokers and hearths - it was a full on scent memory, the smell of my grandparents' home in Hertford. We'd get out of the car and all of a sudden you'd be assaulted by the strong smell of coal smoke across the estate, and my brother and I would run down the garden into the little kitchen (tap-tap-tap on the brittle lino), and then into the living room, with its heavy iron fireplace and solid wooden dining table. We'd spend whole afternoons staring at the fire, and putting stuff on it to watch it burn (crisp packets were especially good: they shrivelled to a ball of polyurethane). Our biggest ambition was to get a Mission: Impossible-style fuse going from the fireplace down to the tiles around it, but sadly wisps of cotton found under the table have never been widely used in the world of explosives, and we'd watch them burn up and away into nothing. I'd only come away from the fire - my face gleaming and burning - when it was time for Sunday tea; usually sandwiches made with cold ham by my Granddad (who, like all grandparents, had his own distinct smell: his was loose tobacco). The bread of the sandwiches had a thick, thick crust, because he had sliced it himself, and I loved to crunch down on it with my baby teeth. Then we'd get back in the car and wave to Nanny and Granddad as we went back down the Hertingfordbury Road: they'd stand in the doorway and wave at us as we went past.


The house is gone now - it was demolished by the Council after they found they were prone to, well, collapsing - and my Nan's gone as well, though Granddad is bouncing around in sheltered accommodation in Ware (he gave up smoking years ago, and while it's wonderful for his health, he's not the same now he doesn't smell of Golden Virginia).


That all had nothing to do with train stations or the countryside, or anything to do with this blog really, but if you can't get nostalgic and a bit melancholy on your birthday, when can you? Indulge me. 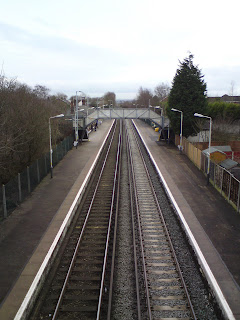 Anyways, to rejoin our story, soon enough the Bf and I were encountering Aughton, and the suburbs were creeping in again. Ormskirk sort of yawns its way down the A59 towards Liverpool, stretching down and down towards the city. It dangles below the ring road, a pendulous length rolling into the countryside, and the railway bisects it in a plumb line straight shot. Stand on a bridge over the line and it drags off into the distance like a stretched rubber band. 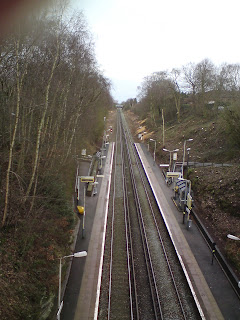 Aughton Park is almost exactly halfway between Town Green and Ormskirk. It opened over a hundred years ago as Aughton Park Halt, and looking at it on the map, you can see the thought processes of the early railwaymen. "Right, we'll stick a railway line between here and here. There's a bridge there - we'll build a station in that spot and call it Town Green. And there's another bridge further up; stick a station there and we'll call it Aughton Park Halt. Job done." Looking at the buildings around the station, there's not much that looks very 1907 - it's mostly 50s and 60s bungalows, with some 70s maisonettes. It doesn't seem like there was much of a community to service back then. 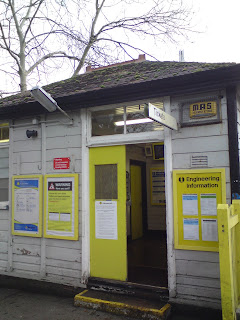 Aughton Park's station building is just a hut as well. A little timber cube on the bridge, painted 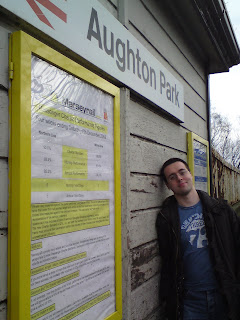 grey and yellow thanks to the Colour Tsars, perched high above the tracks. Aughton Park's buried deep in a cutting, with long steep ramps running down to the platform. There are signs warning you it can get slippery here, and I'm not surprised: the drop down is positively vertiginous. If the local area were more skateboarder than pensioner, this would be a hell of a ride; as it is it's probably responsible for a lot of broken hips and bruised ankles. 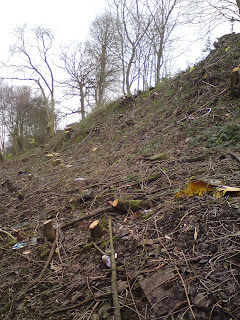 Something awful has happened here: either there's been a napalm attack on Lancashire and it's been hushed up, or someone's gone mad with a chainsaw. The trees hadn't just been cut back, they'd been hacked, sliced, and destroyed, and all that's left are stumps and twigs. I suppose it's one way of keeping the leaves off the line, but it seems a bit drastic: sort of like shooting your dog so you don't have to clean up after it.


This was the end of the line for me. Now the only remaining vestige of the Northern Line is its very top: the sandy coastal stations running into Southport (there's no way I'm going anywhere near there until spring). This is probably the strip of Merseyrail I've travelled most over the years, back and forth to various student homes in Ormskirk, then back again over the years for nostalgia trips, and I don't think I'll ever lose my affection for it.


The wind whistles into the cutting pretty badly. The lack of trees doesn't help. The train that arrived was toasty warm by comparison, and there were plenty of seats. We whizzed back into the city for a great lunch at the Bluecoat, and a poke around the galleries, and beer, but in a strange, secret way, this two station tart was probably the bit of the day I enjoyed most of all. 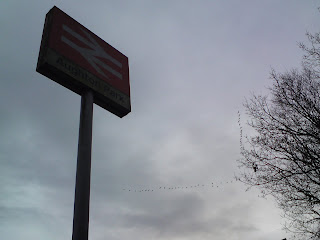